EDITOR’S NOTE: As part of our Explore Canada Like a Local campaign, we cosponsored a contest whereby one photojournalist was awarded a free trip to go on assignment up to the Arctic. Travel photographer Bill Drumm caught our attention for his progression in wildlife photography, and this tweet:

Together with Frontiers North Adventures, Travel Manitoba, and ExploreCanada, we sent Bill to Churchill, Manitoba, on a journey to find and photograph the world’s largest terrestrial predators. Bill noted afterwards, “The opportunity to photograph and film them was indescribable, giving me a connection to the arctic I never before felt, but now carry with me always.” The following photo essay is taken from that trip. 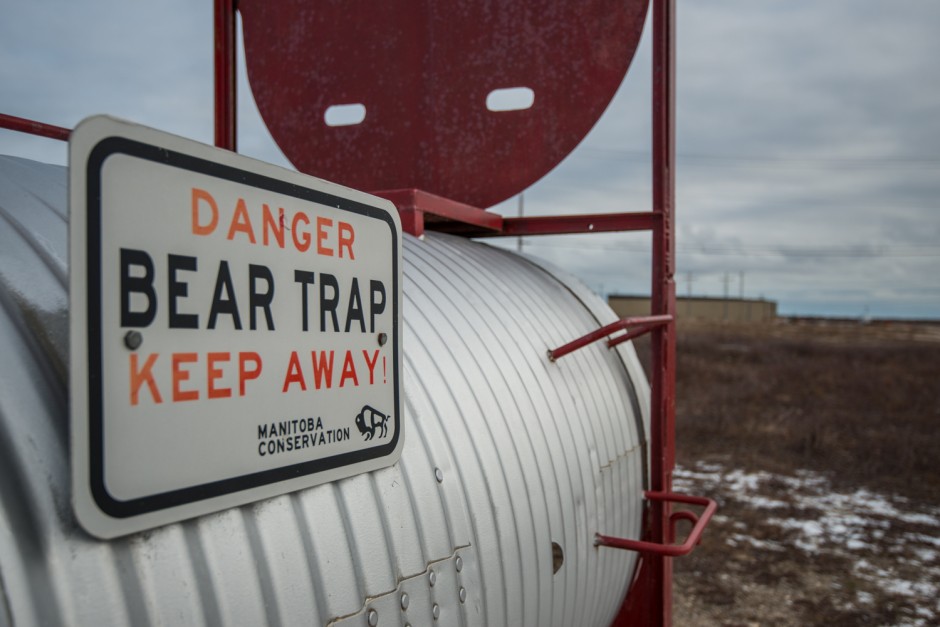 A bear trap near Churchill, Manitoba, Canada. These traps are baited with seal carcasses and placed strategically around the small town to trap any inquisitive bears. Churchill is a town of less than a thousand people, and is positioned near the largest concentration of polar bears on the planet. Any bear that is trapped is taken to Polar Bear Jail, a holding facility where the bears are kept temporarily, before being airlifted out of town and deep into the tundra. 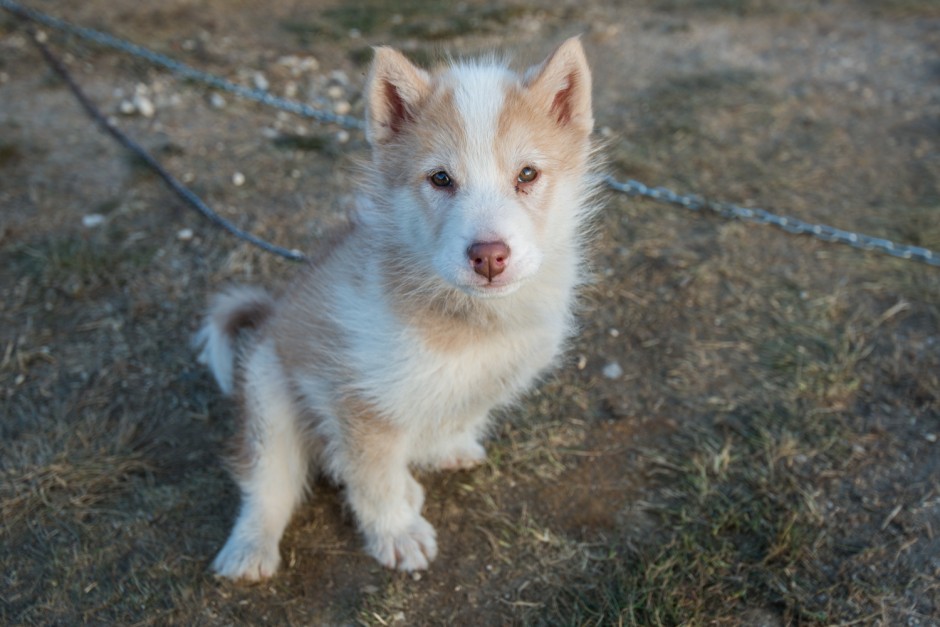 The cutest and smallest sled dog puppy in Churchill, on her chain outside of a store in town. For hundreds of years dogsleds were the main mode of transportation in the Arctic during the long winters. Today, dogsleds are used primarily as a tourist attraction in Churchill. The local economy was once fueled by grain export and trading, but today tourism brings in more dollars than trade. 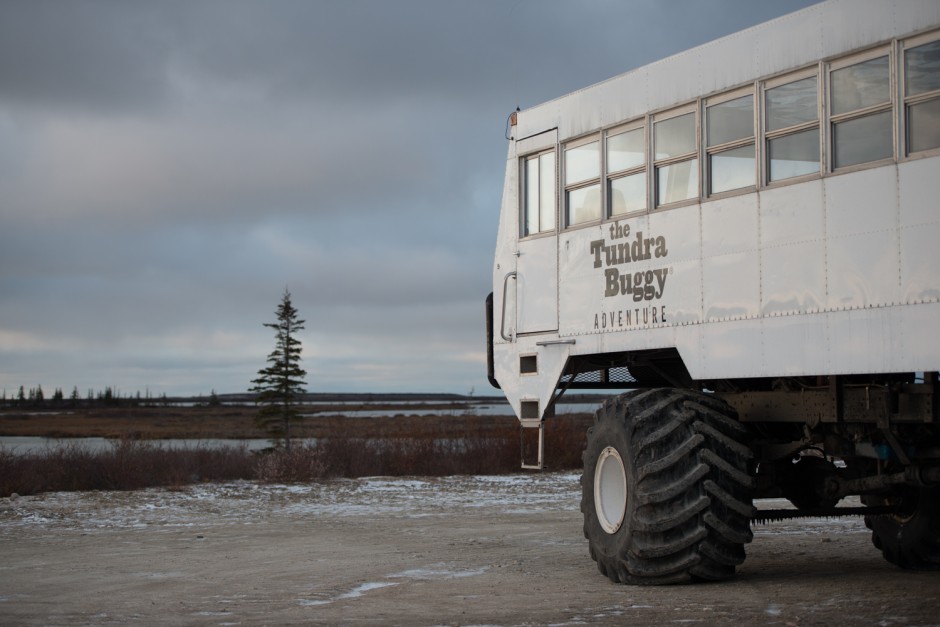 Tundra Buggy #13, operated by Frontiers North Adventures, at the station in Churchill. Tundra buggies are large bus-like vehicles with monster truck tires that cruise over the tundra like nothing. There's a fireplace in the back of the bus, and a large viewing platform out the back. It's the safest way to see hungry wild polar bears up close. Our buggy driver was JP McCarthy, a laid back dude who wears straight-billed baseball hats and operates heli-skiing tours when he isn't looking for polar bears. He was hilarious, and we found bears immediately on our first day of the polar bear safari. 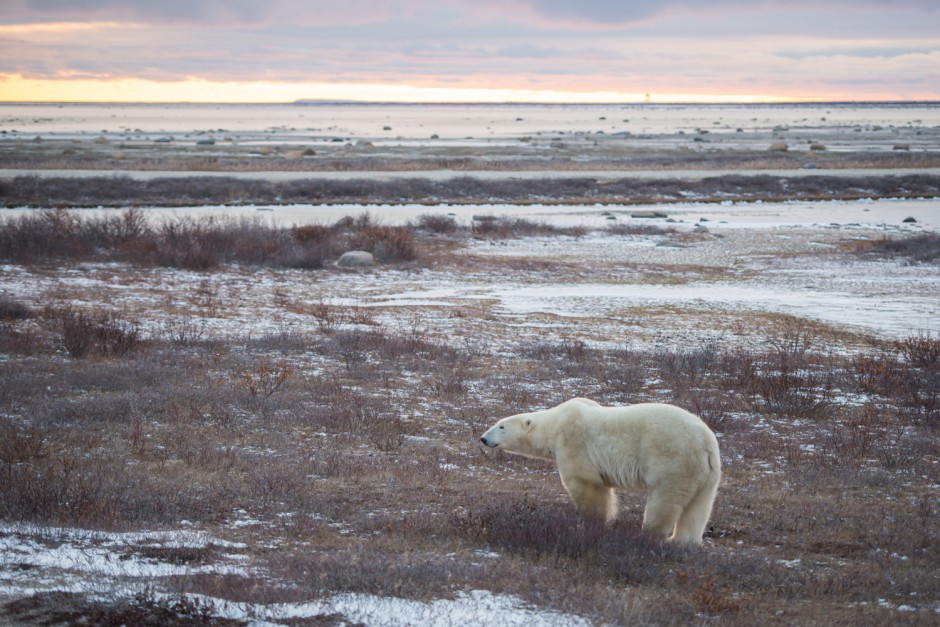 Just as the sun began to crack over the horizon, we found our first polar bear. Ten minutes into the tour we came upon this fella, just waking up after a cold night hunkered down on the tundra. Polar bears gather in large numbers along the Hudson Bay as they await the sea ice to return so they can hunt. 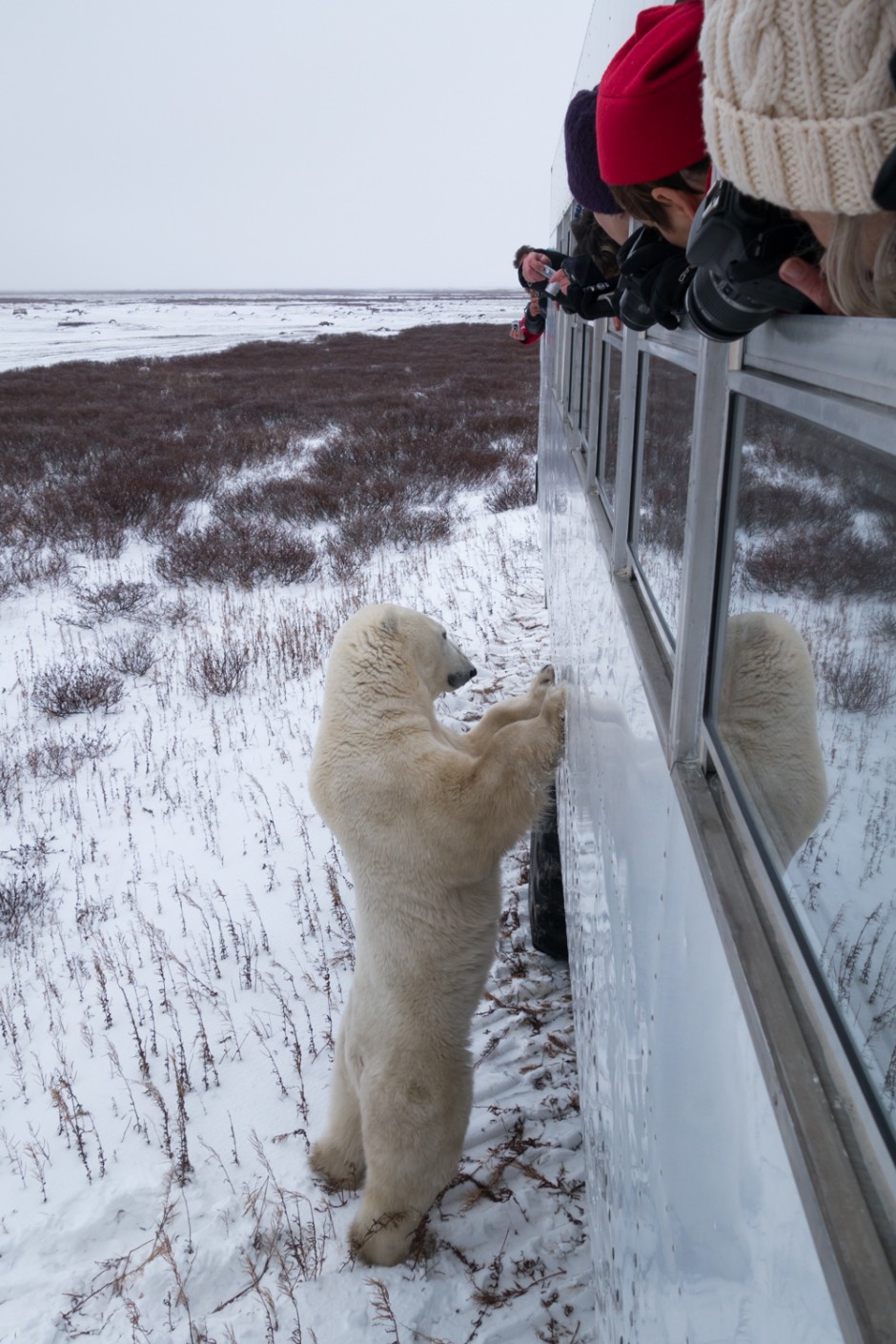 A group of tourists photograph an aggressive male polar bear who we called Scar, as he lunges up the tundra buggy. Scar repeatedly tried to climb into the vehicle, even getting on his tippy toes to get a piece of us. These large vehicles allow an unbelievable view of the largest land predators on Earth. 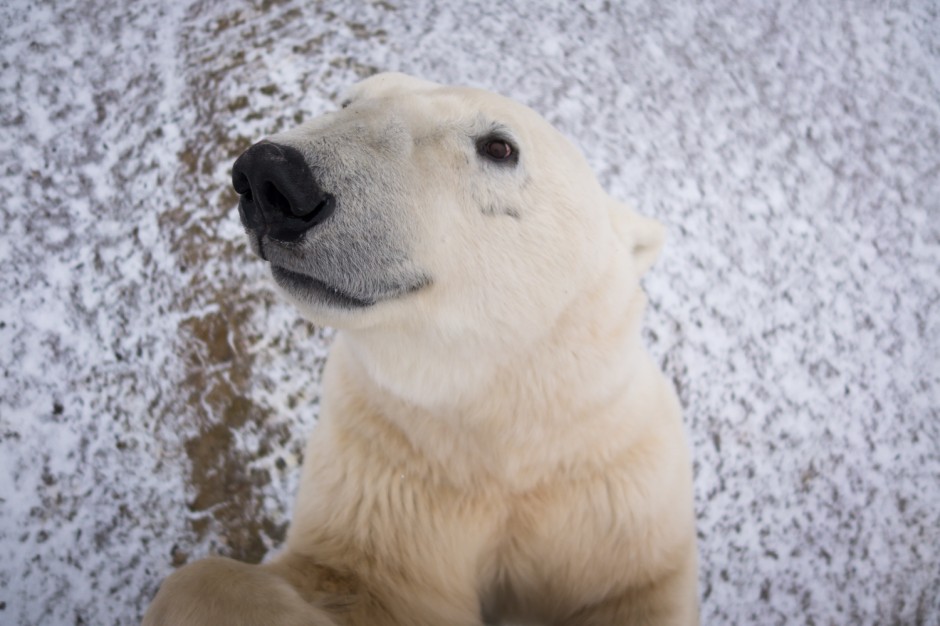 Scar leapt up on the buggy and got very close to my camera and precious fingers. Take a look at this video to see how close he was, at one point only a few inches from my GoPro. 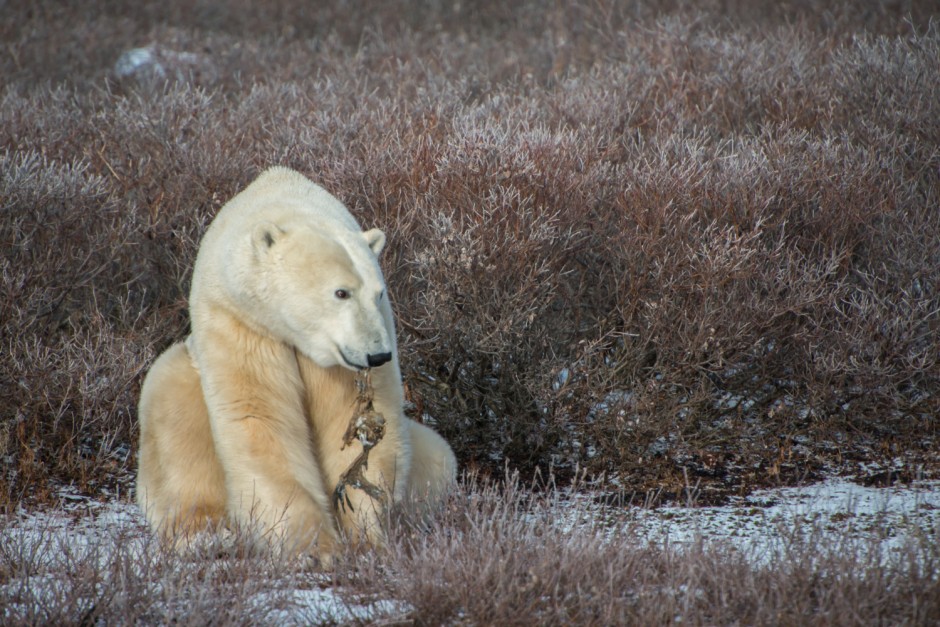 Scar feeds on a mummified bird carcass that he scavenged on the tundra. Polar bears fast for months at a time while they wait for the ice to return to Hudson Bay. The large animals need blubber-rich seals for sustenance, and on land there's simply nothing for them to eat, save the occasional carrion. This is what can make polar bears dangerous; they are literally starving to death while they congregate near the town of Churchill. Just after our trip, a man and a woman were mauled by a bear right in the center of town. People here learn to be ever vigilant against bears, but occasional encounters are inevitable. 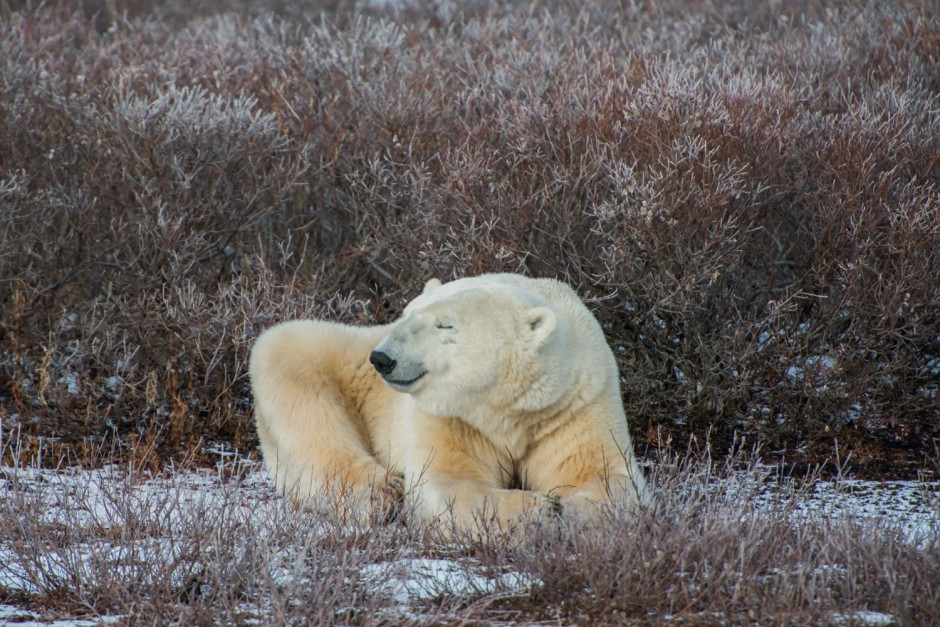 After eating the bird carcass, Scar felt quite satisfied with himself, and gave a big smile before dozing off to sleep. This was likely the only food the bear would have had for a very long time, and he enjoyed it. 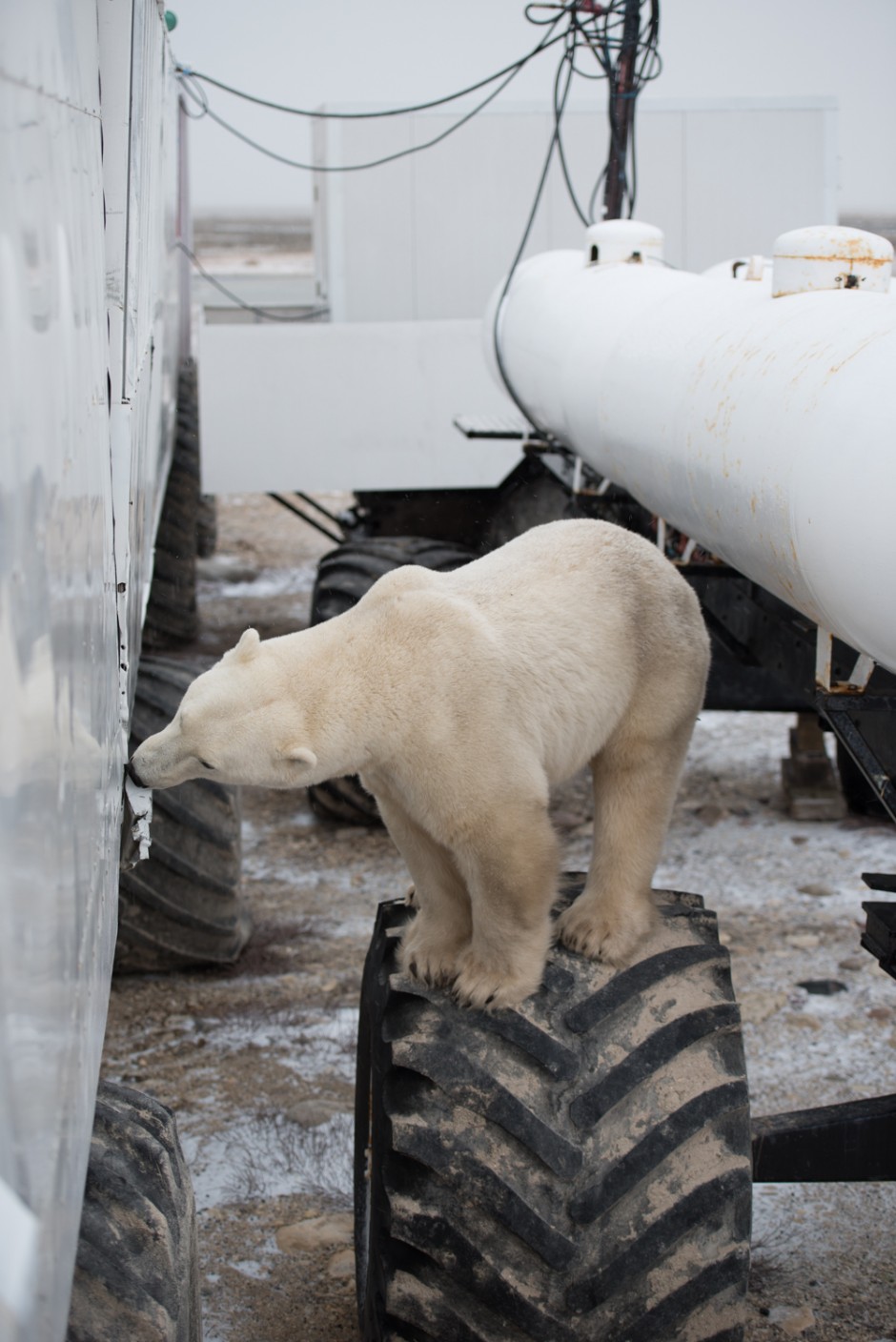 But still, a bear’s hunger is never satiated, especially from a puny, stale old game hen. So Scar decided to try his best to access the kitchen inside this tundra buggy lodge where we were staying. He succeeded in getting his head inside the kitchen, startling the chef at 5am one morning. For a 1,000-pound animal, polar bears can be stealthy. 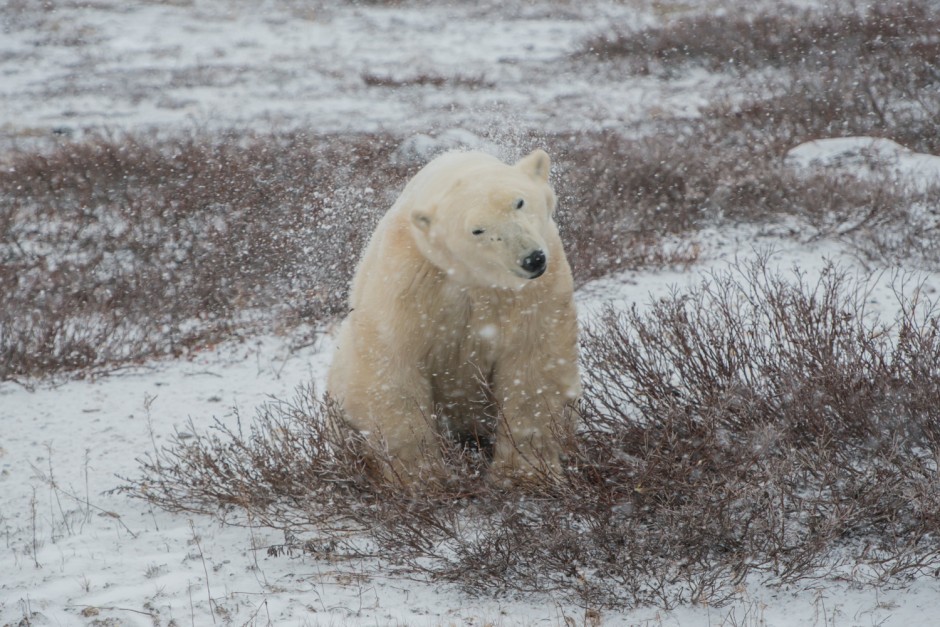 Scar shakes the recent snowfall off his coat, early in the morning on our final day of the tour with Frontiers North. During our tour we saw all the seasons in three days. The first day was warm and sunny, the second progressively darker and colder, and the third a full-on blizzard. If you’re a polar bear, all there is to do during a storm is hunker down and wait. The snowier and colder it gets, the sooner the ice--and dinners--return. 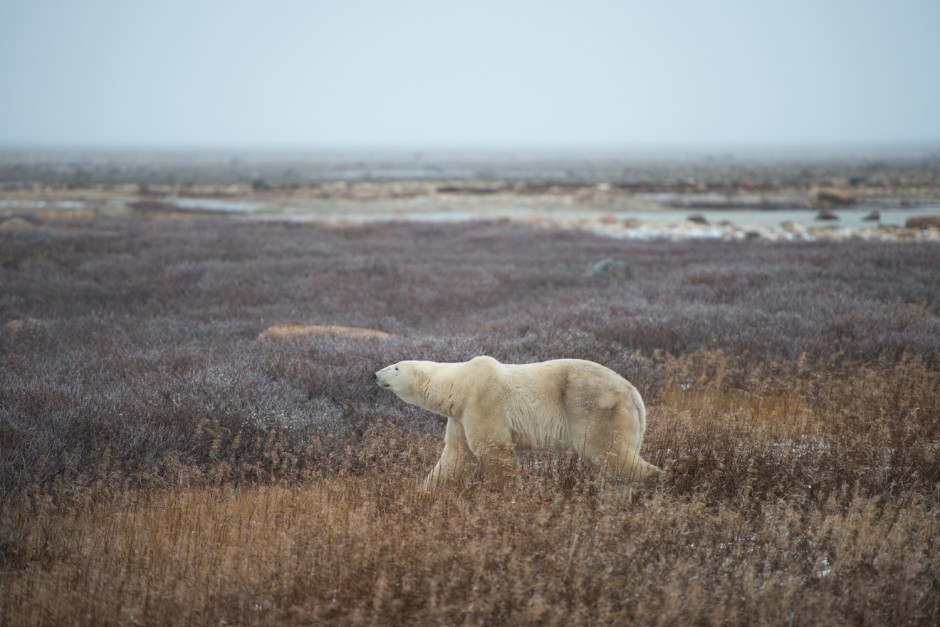 But for now Scar must wait, searching the eternal tundra for food until the ice returns again. 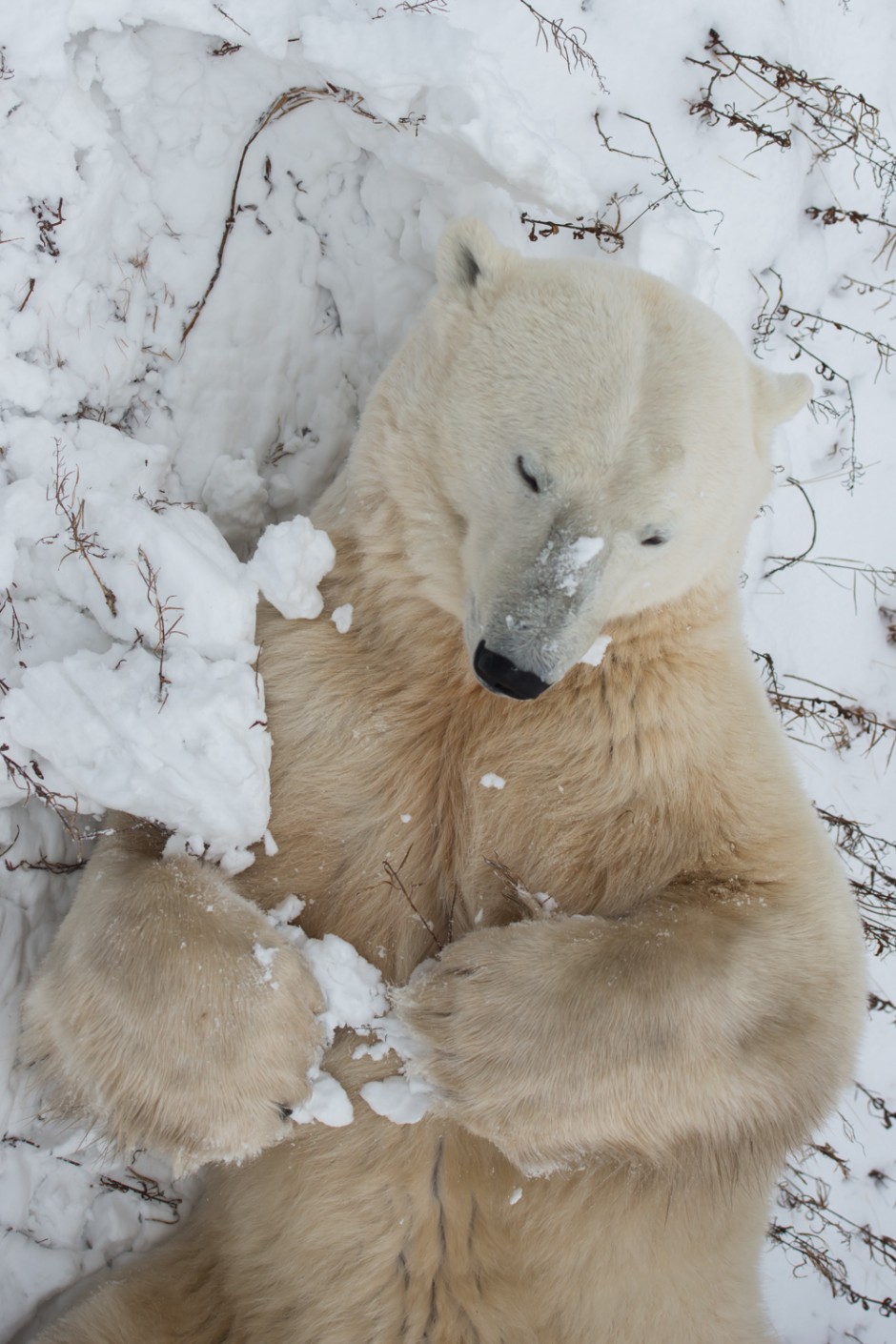 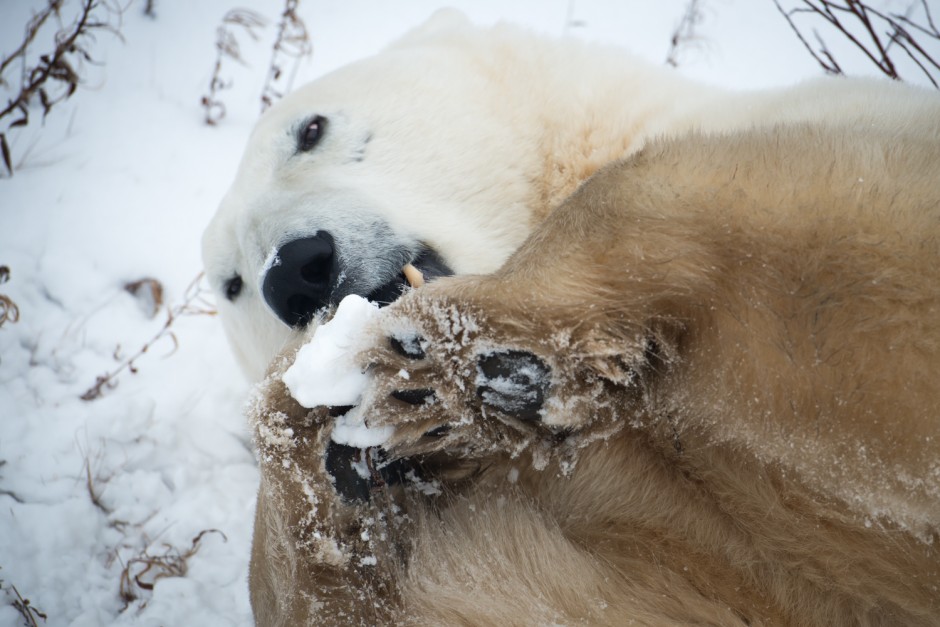 13
Tagged
Manitoba, Canada Canada: Explore Like a Local
What did you think of this story?
Meh
Good
Awesome
✖
travelstoke
Download the mobile app
stoked by