MY FIRST EXPERIENCE OF CUBA could not have been more different from my second. My first visit was for a wedding in Varadaro, a kind of “roped off” resort area. The endless mojitos were killer but I knew there was an entire culture I wasn’t reaching, and that I’d have to come back.

So, I came back — four years later — this time walking on average 15km a day, camera in hand, and with no agenda. I crossed the invisible border (the Passio de Prado, which runs along the Capitol Building) that seems to keep tourists in the safe zone of Old Havana, and explored out into Centro, Vedado, Cerro, and Miramar, as well as taking a side trip to Trinidad. It felt like around every corner was a new scene, a new side of Cuba or person to meet, a new aspect to consider. Here are 16 moments from my wanderings that surprised me, brought me joy, and have left an impact on me long after I departed. 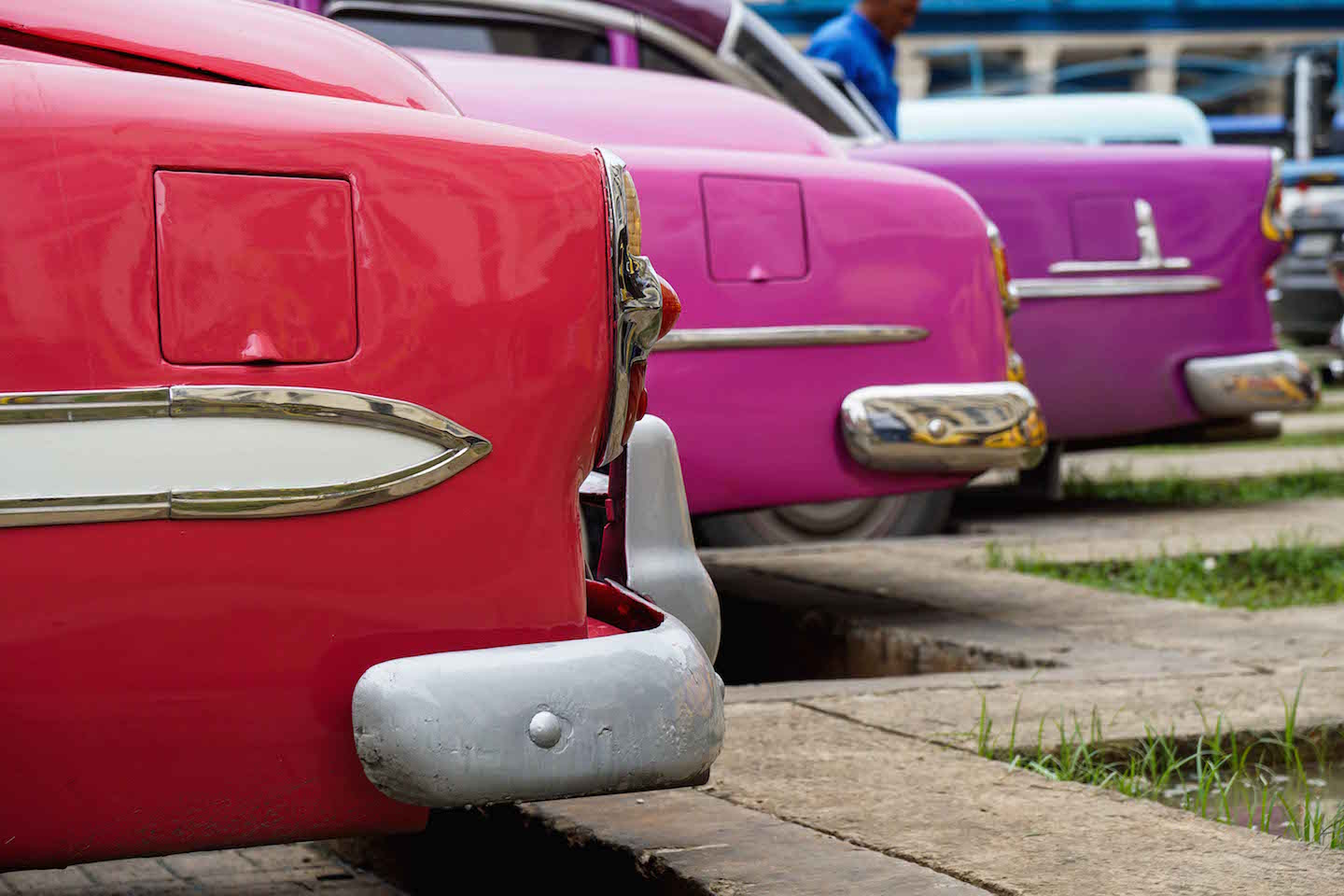 Let’s get it out of the way — the vintage cars are wicked. I expected to be sick of them after a while — to roll my eyes at the tourists being driven around the city, selfie sticks coming out of every window. But, after three solid weeks in Havana I was still finding myself slack-jawed at the colors or models that drove by. I have no idea how long you’d need to stay in Cuba to get used to seeing them and not stare but I can confirm — it’s more than three weeks. Of course, the best-looking models are for tourists only, but there’s an equal allure — at least, for me — to the junkier, rusted up, frankensteined cars that locals use as group taxis. And there’s even something about the little Russian imports that drew me in. All in all, yes — the cars are awesome. It didn’t get old. 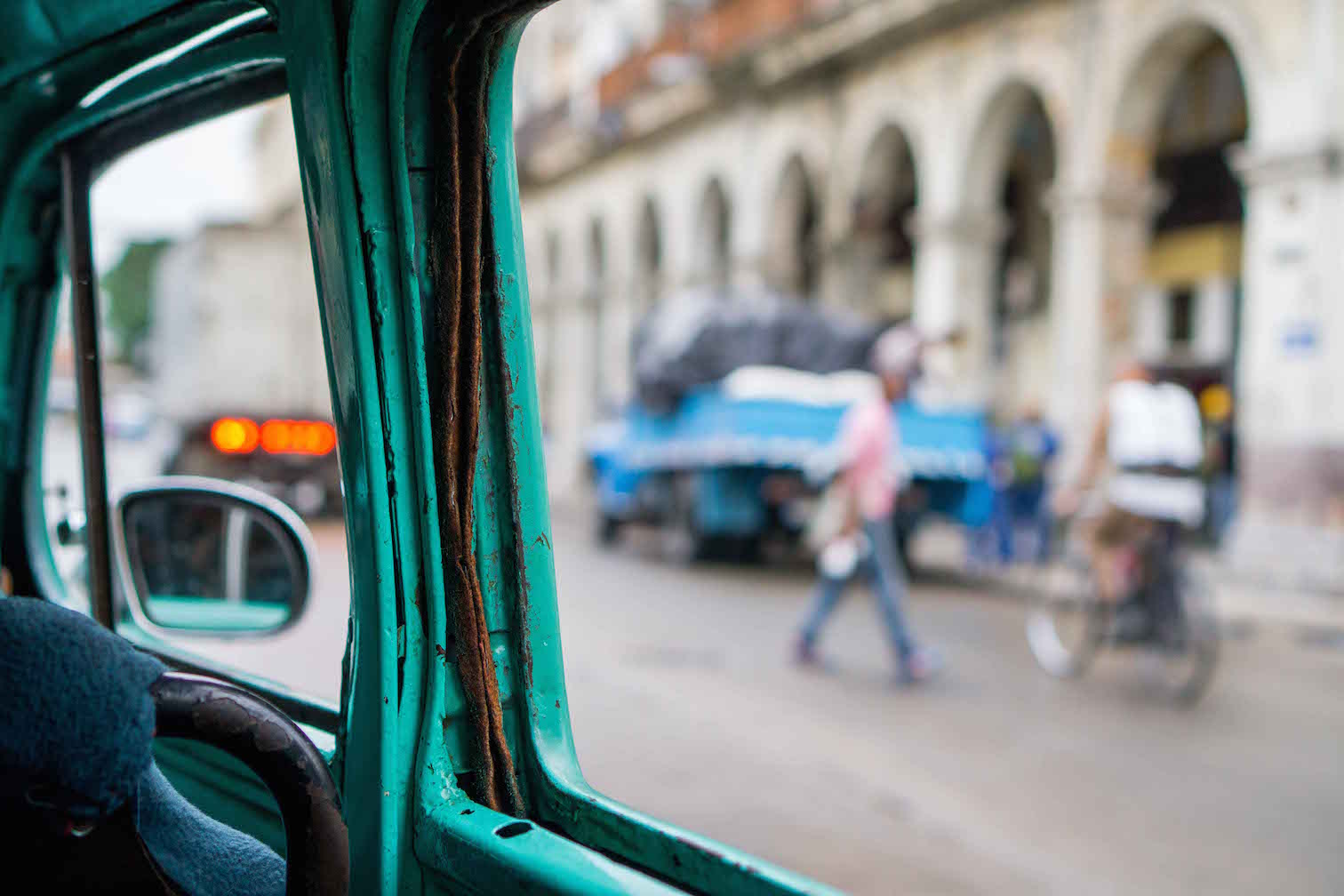 Driving around in a vintage car was a surreal experience — I am surprised to admit I enjoyed it so much. But the fancy ones will set you back a pretty penny. Instead, a group of us coerced a local group taxi (picking up multiple people for different destinations along the way) to take us around for a bit, and it was perhaps even more thrilling — to us anyway — with all of its rust, its dents, its patched together feeling, the random foreign modifications, the creaks and groans. And this shade of green — Havana Green, they called it — it’s my spirit color. Watching Havana roll by through the squeaky rusted out window was one of the cooler moments of my trip. 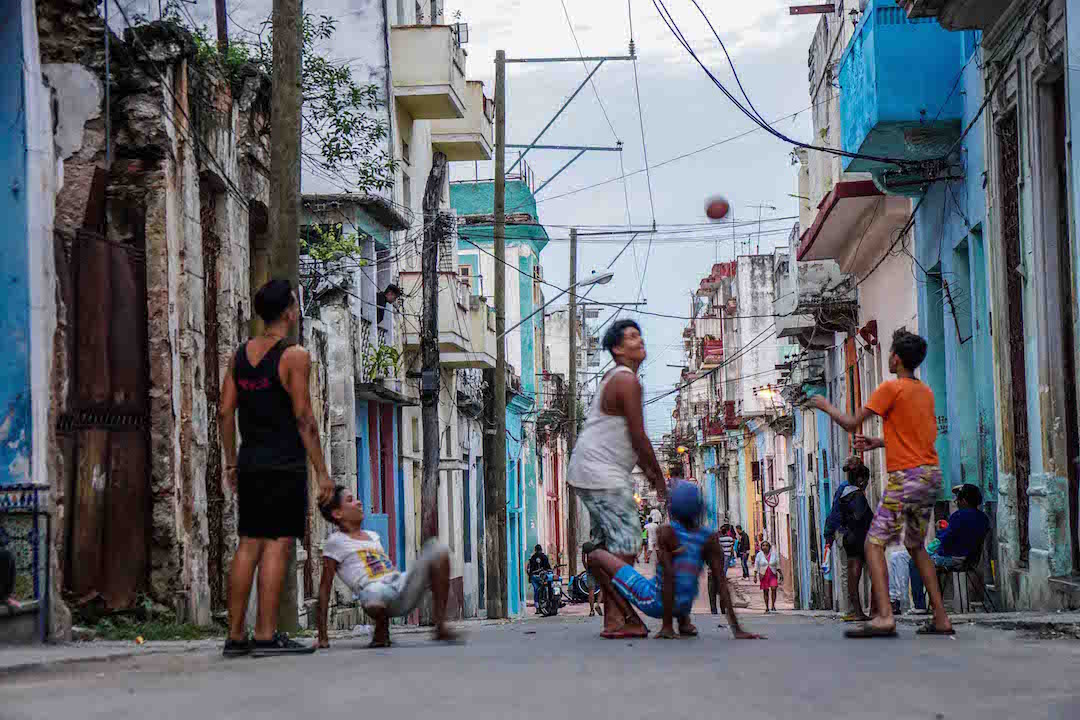 Havana after 4pm was the best. Kids off school, families heading home, and mamas cooking away — every street felt so lived in. With no cable and no wifi, the streets get crowded and it has a feeling of something nostalgic for me. Something from long ago or maybe that I never really had, that sense of neighbourhood and life together out in the streets. 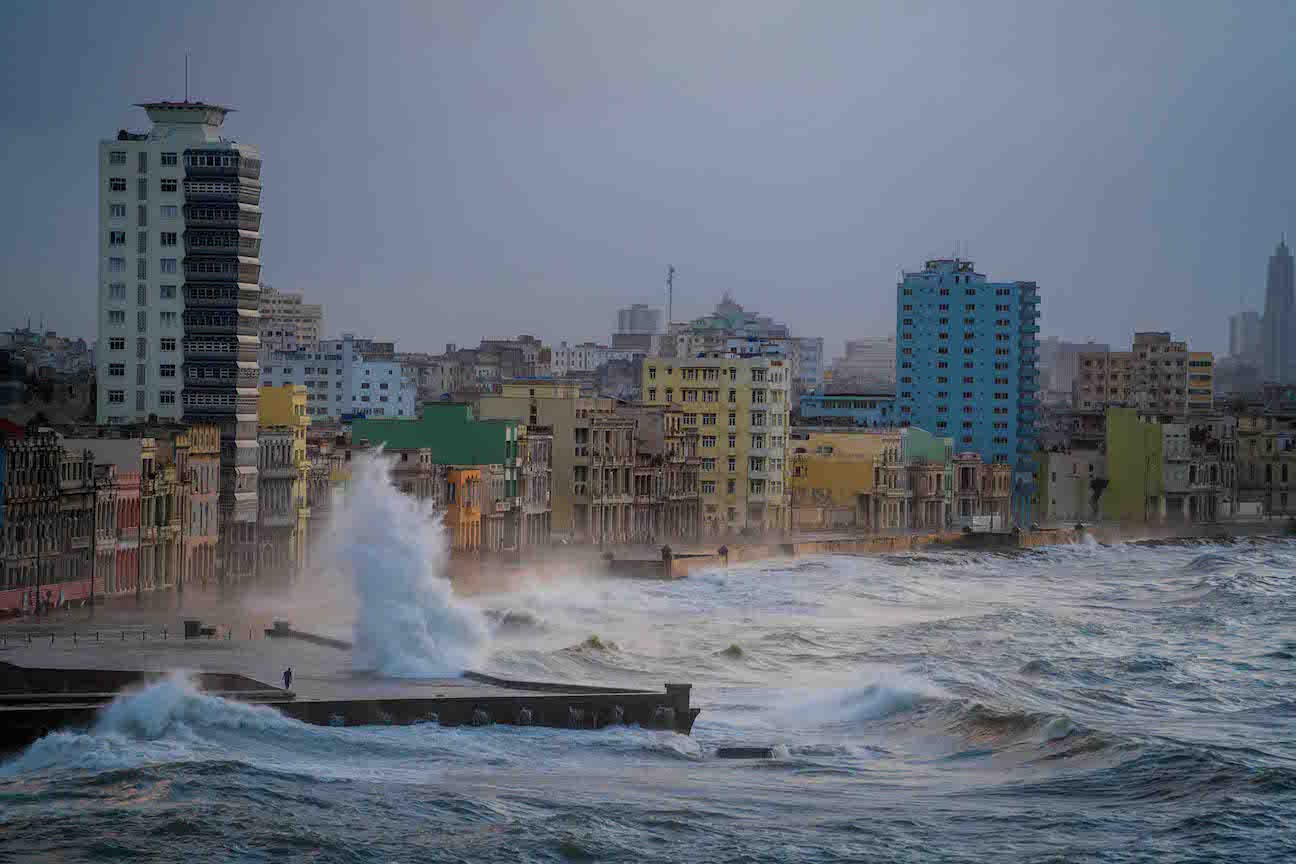 My first week in Havana was fraught with rain. Like pounding, serious rain. And then the waves rolled in — pounding over the Malecon one after the other. I naively had pictured Cuba as quintessentially sunny and calm — it was phenomenal to experience her in a completely different setting like this. 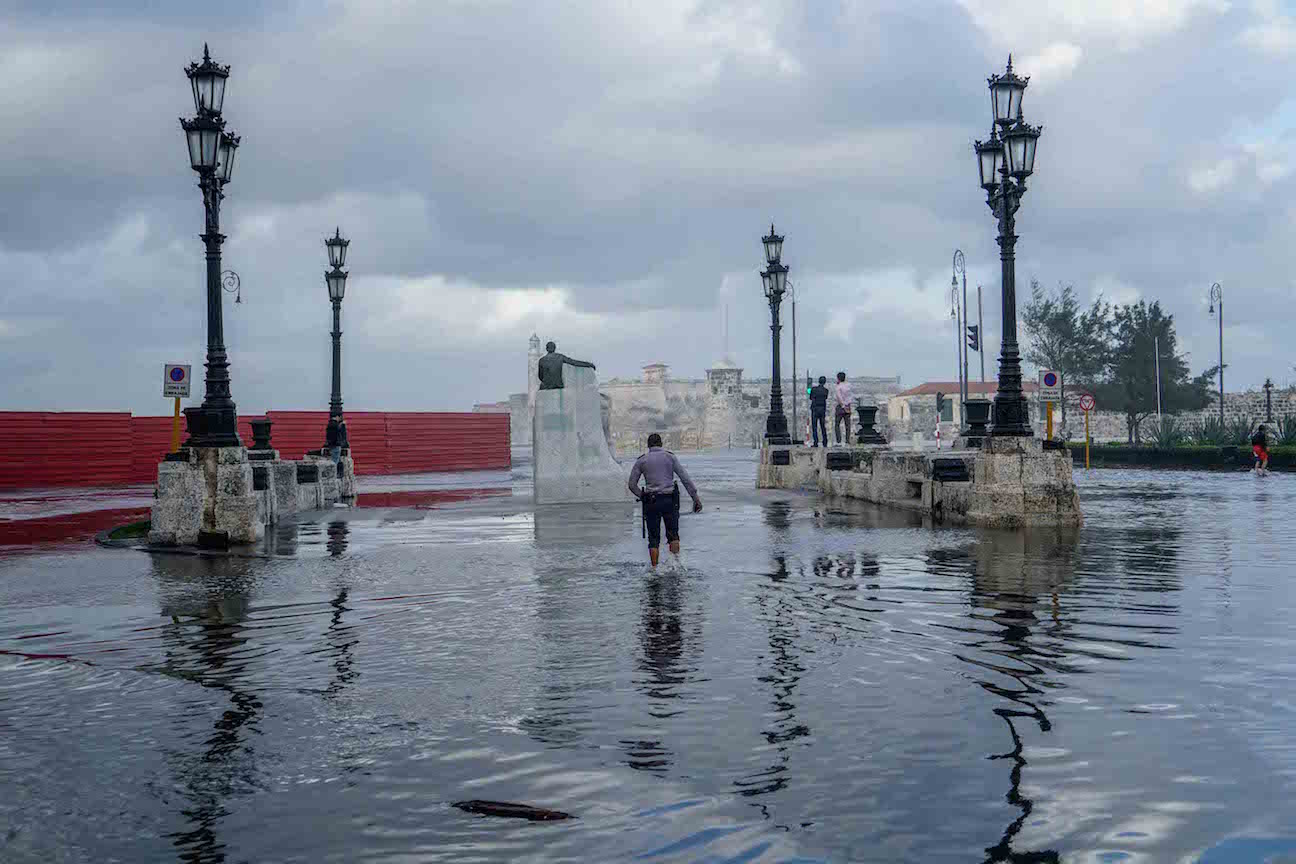 A cop wades through flooded Habana Viejo. The waves came crashing in so hard that Old Havana literally flooded. We had to take off our shoes and wade in thigh-deep waters to get to safer areas. To see an area go from full of tourists and hawkers to apocalyptically void like this was one of the more memorable experiences in my entire life. 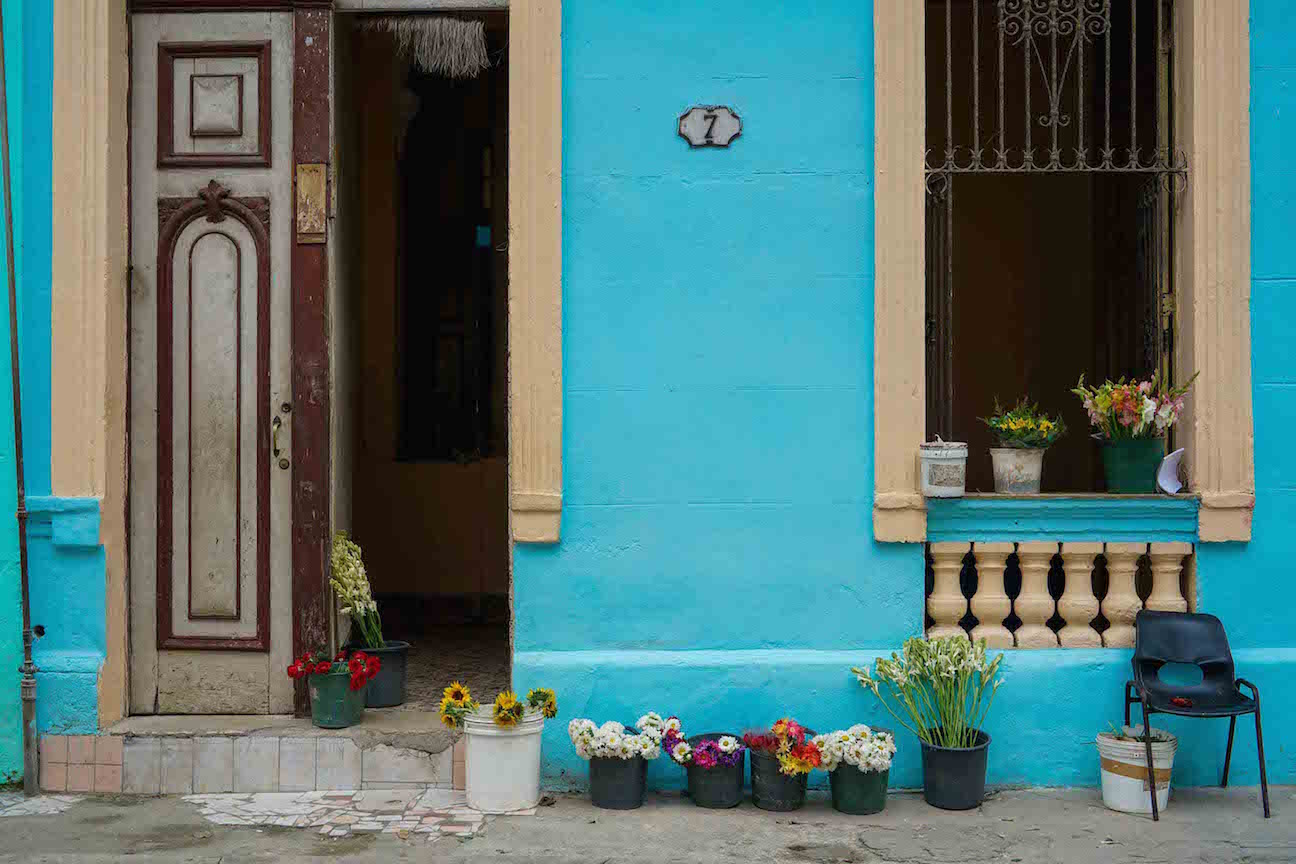 A pop-up flower shop in Centro Habana. So many Cubans have found a way to work from their homes — repairs, laundry, cooking, and, here, flowers, are just a few examples. In a country where it’s illegal to be unemployed, finding (or making) work is a vital part of life. I really fell in love with the ingenuity and creative spark people had when coming up with something unique — or useful — to offer their neighbourhood. Shoemakers, tailors, cooks, launderers, bakers, and yeah, florists, just to name a few. It just gave the streets this air of everyone participating. 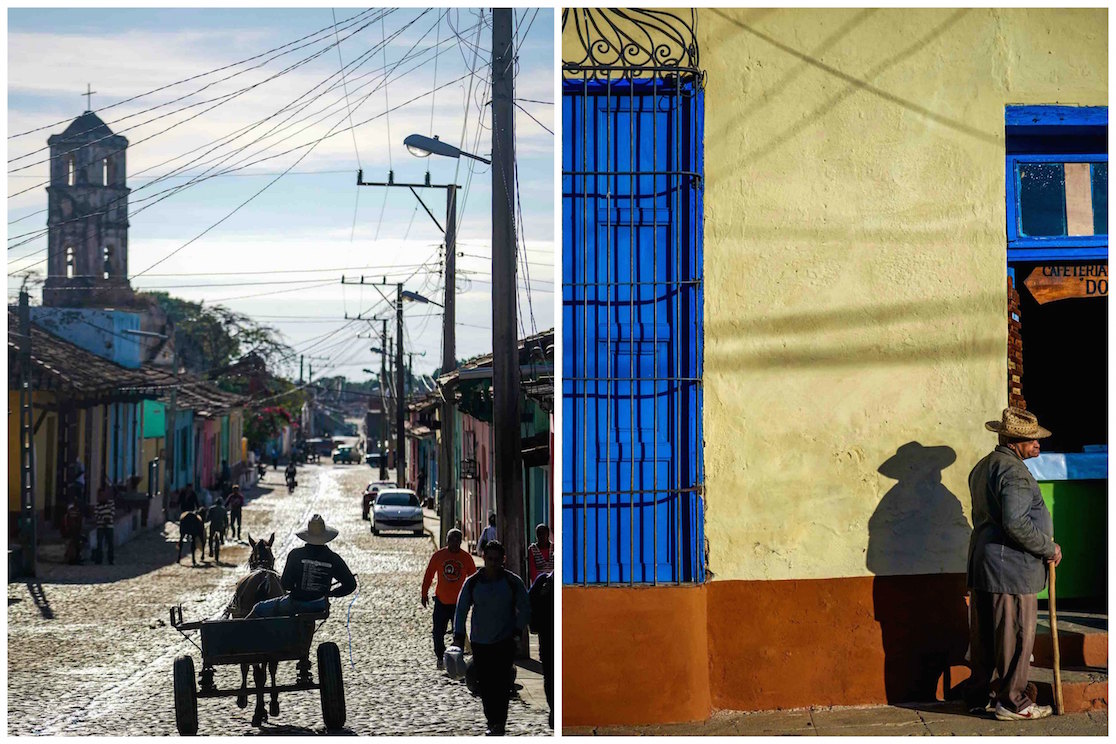 The morning light, before the tourists descend upon Trinidad de Cuba, was astounding. Trinidad is famous for its pastel colours and historic atmosphere — it’s a UNESCO heritage site — but it is best seen early in the morning. Again life is out in the streets: old men sipping espresso, kids heading to school, women opening up their little stores. Four or five days in a row I was out at 7am, wandering, with no other tourists in sight. People really have lives that look like this. I couldn’t get over it. 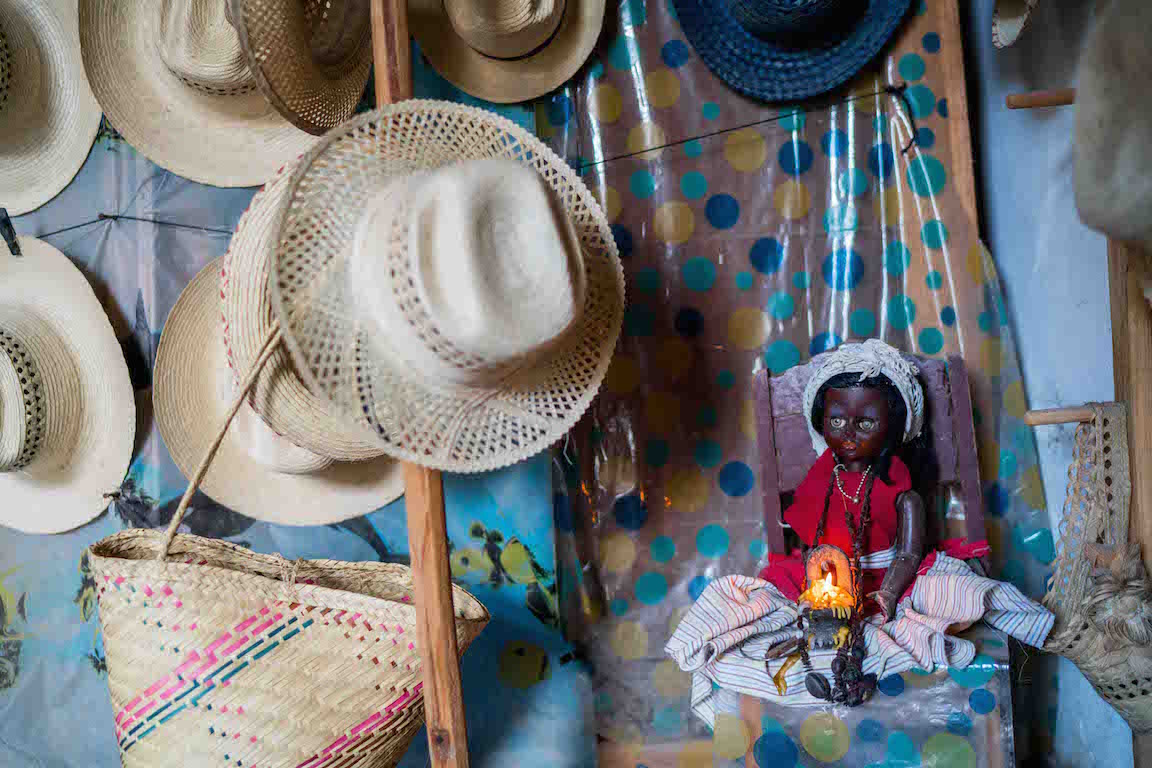 Practicing Santeria. This was a little hat shop in Trinidad de Cuba where the mama wove hats and bags by hand. I paid $4 for my hat and I think she overcharged me. I didn’t mind. As I was poking around the selection, I noticed the doll. I began to see them everywhere — little haunting (only because dolls are inherently creepy to me) alters to the spirits. I take no issue with Santeria, but I didn’t expect it to be as forward as it was in parts of the culture. 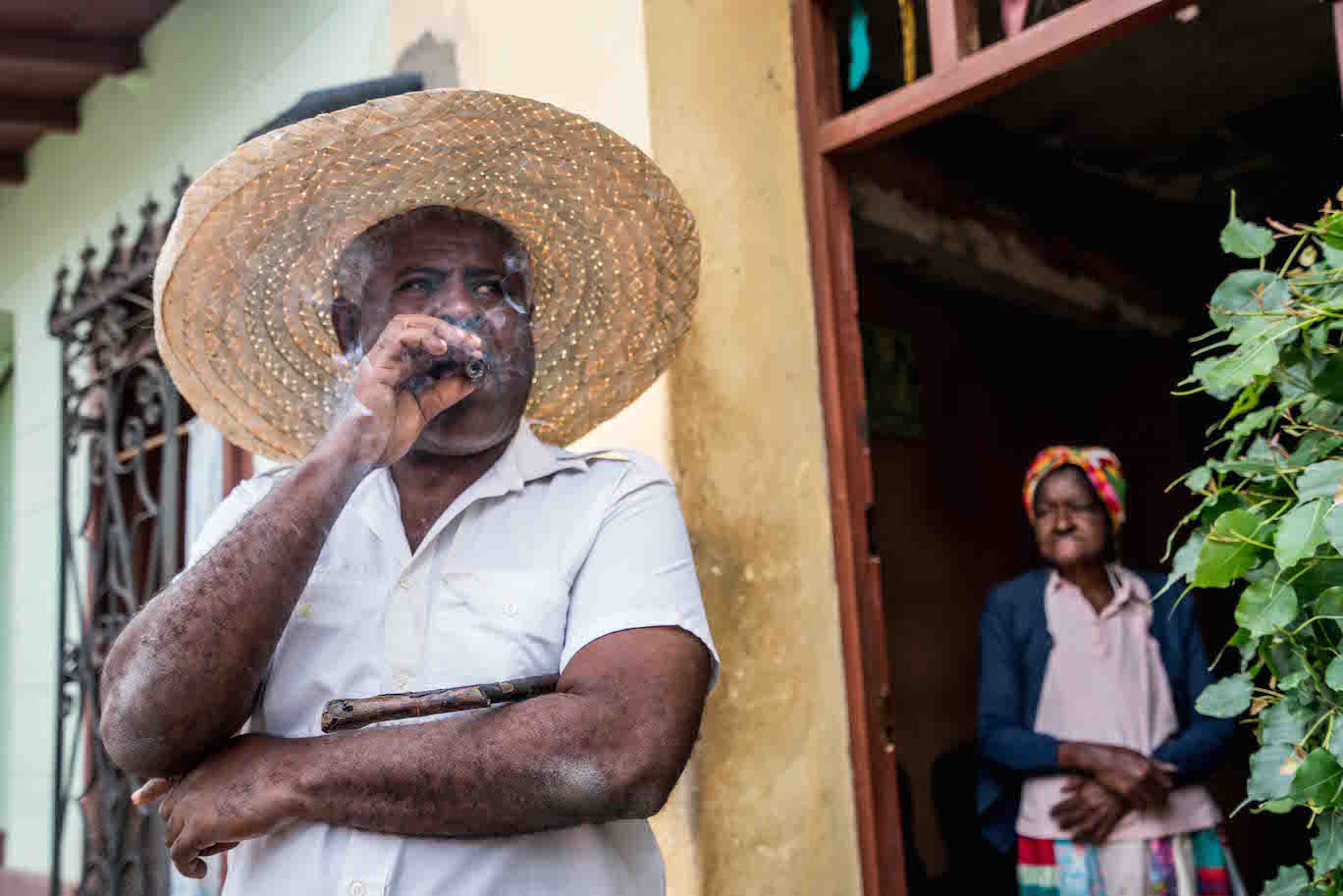 Nor did I expect to not only meet a Santeria priest, and have him ask to be my baby’s godfather. I was 6 months pregnant on this trip and got plenty of fond attention everywhere I went, which was actually a lot of fun. But this man — Luis — was pretty insistent that he bless my belly and that he be the godfather. Dear future offspring: you have a Cuban Santeria priest for a godfather (read: you are super, super cool). 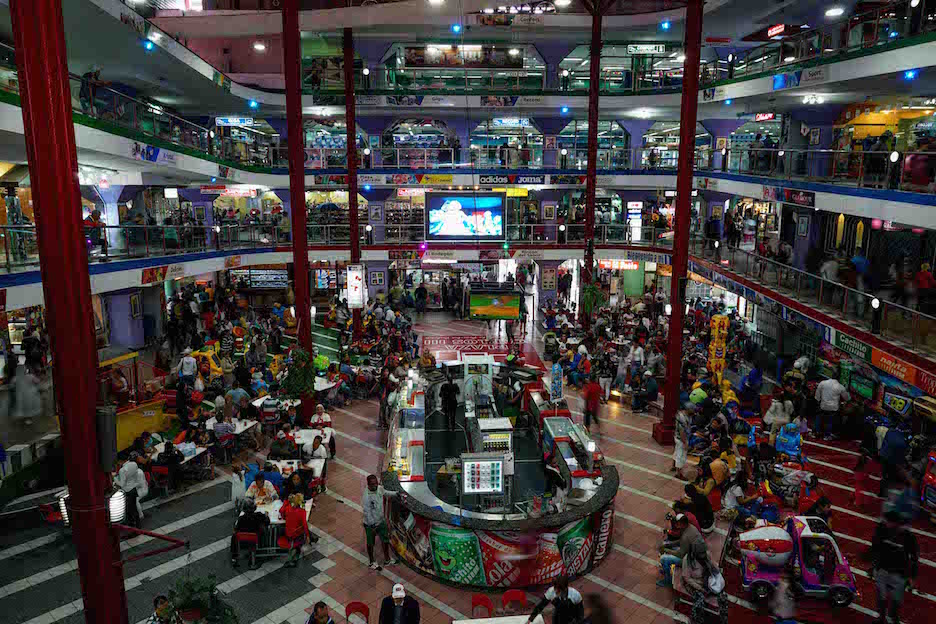 My casa — a sort of bed and breakfast where you can stay with locals and have homecooked meals (which I suggest people do instead of hotels with all my heart) — was near to the largest mall in Cuba. Three whole levels of stores I’d never, ever heard of except for Adidas. People would come here to use the wifi, and have beers on the main level, all day long. Literally, all day. It was a circus and it was impossible to understand how any local Cubans could afford anything inside it, given that the government stipend is roughly 25 CUC ($25 USD). At any rate, everything in here was so vaguely familiar but not quite right all at once. 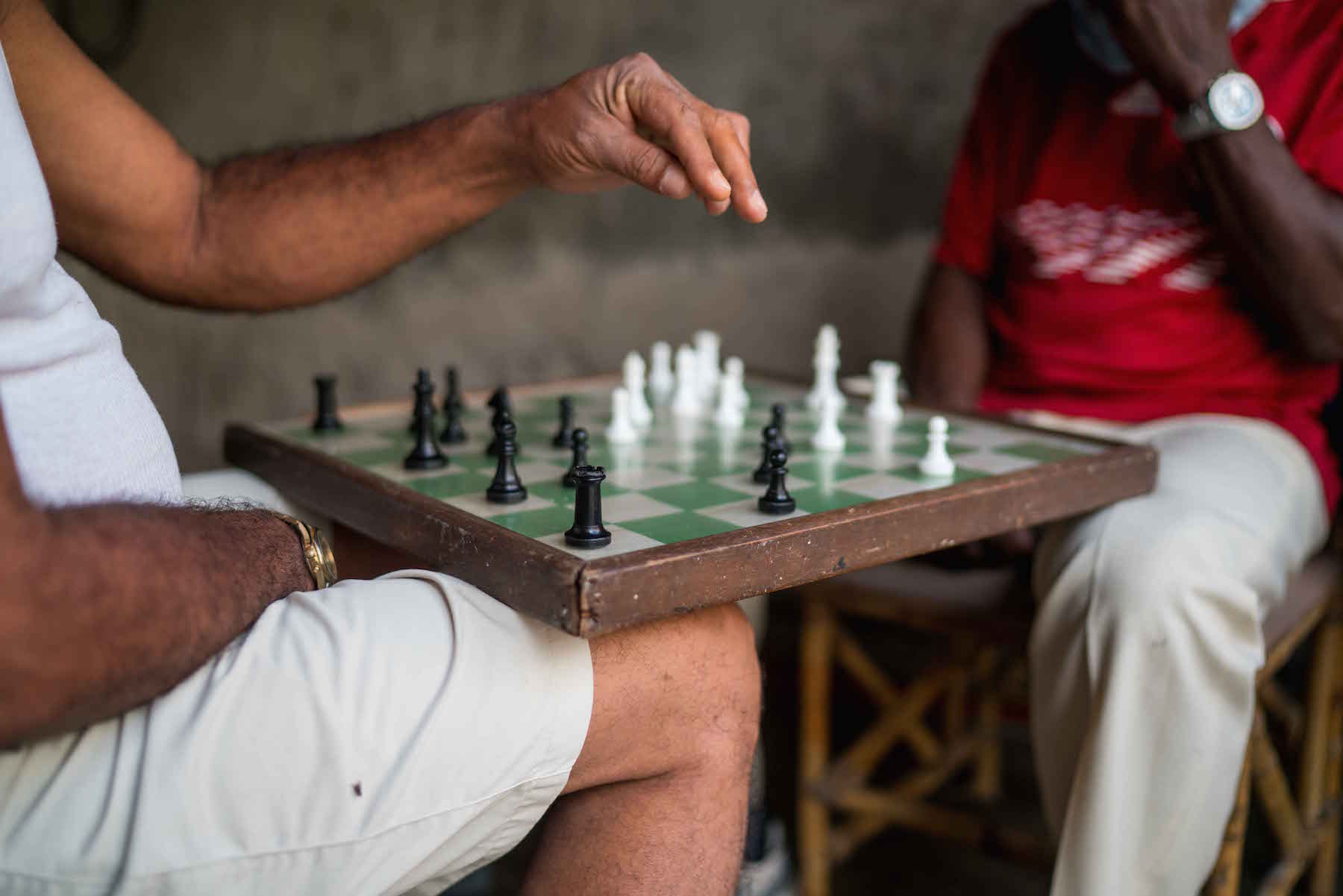 Two men spend the afternoon in the rain playing chess at what was possibly the slowest pace of all time (at least, that I’d ever witnessed). People say time is different for many places around the world: island time, African time, New York time, Indian time. They all have different meanings and connotations. Cuba time is possibly one of the most laid-back “time” zones I’ve ever been in — everything ran behind not by a bit but by hours. To boot, nobody cared. As a photographer — where two hours (or even 20 minutes) can be the difference between an alright photo and a phenomenal photo, this was difficult. However, sitting in their door stoop waiting for one of them to make a move was a delicious test of patience on my part and one that I can stand to re-learn more often. 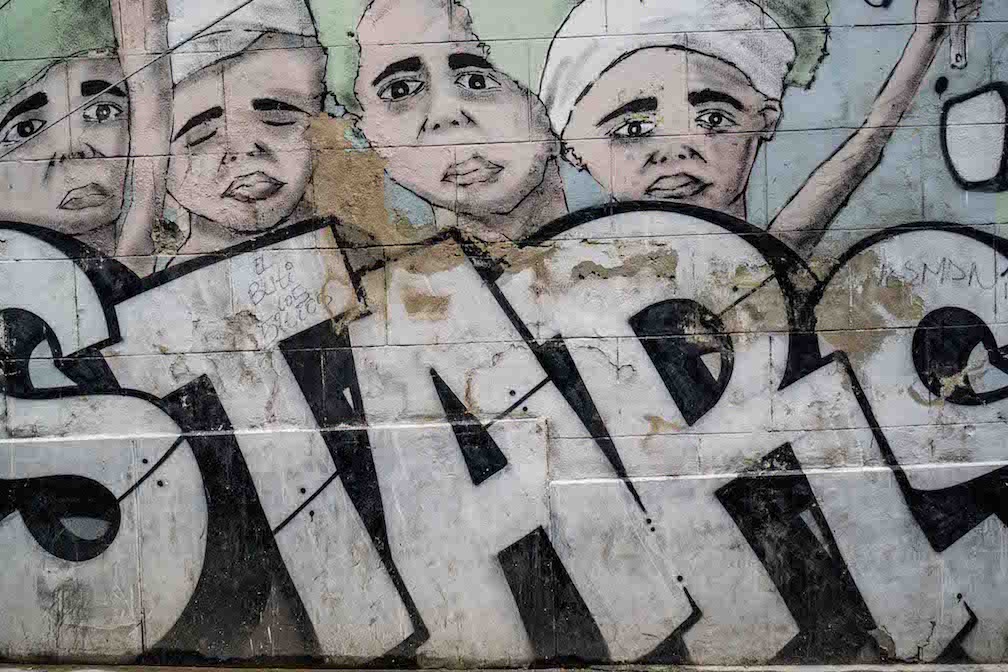 “5 Stars” is an infamous Graffiti artist who haunts the back alleys of Havana. His work was strewed across walls all over the city, though mostly in Centro. I found this symbolic of the artistic uprising all across Havana (and Cuba). Underground music clubs, hidden tattoo parlours, bars with no names, many events by word of mouth — there's a subculture here that's evasive and enticing. In a place where much is regulated, the artists are among the first to be trying to break free from the grip. It doesn’t mean they don’t love Cuba — but acts of rebellion, however small, add up to a movement eventually. 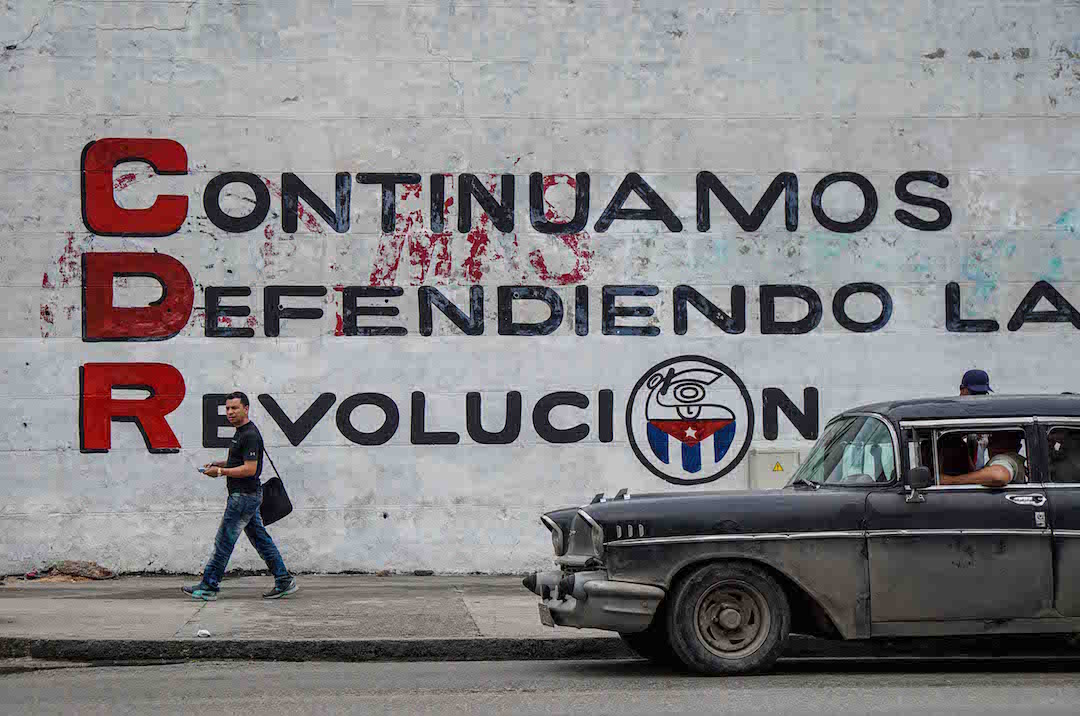 Graffiti and musicians and artists can be found everywhere in this world — but it’s highlighted, to me, when this is the backdrop. Propaganda was a common sight to see around Havana — and Cuba — as an ever-constant reminder of Cuba’s history. I think this is why things like graffiti, skateboarders, tattoos, and other small rebellions stand out so much here. 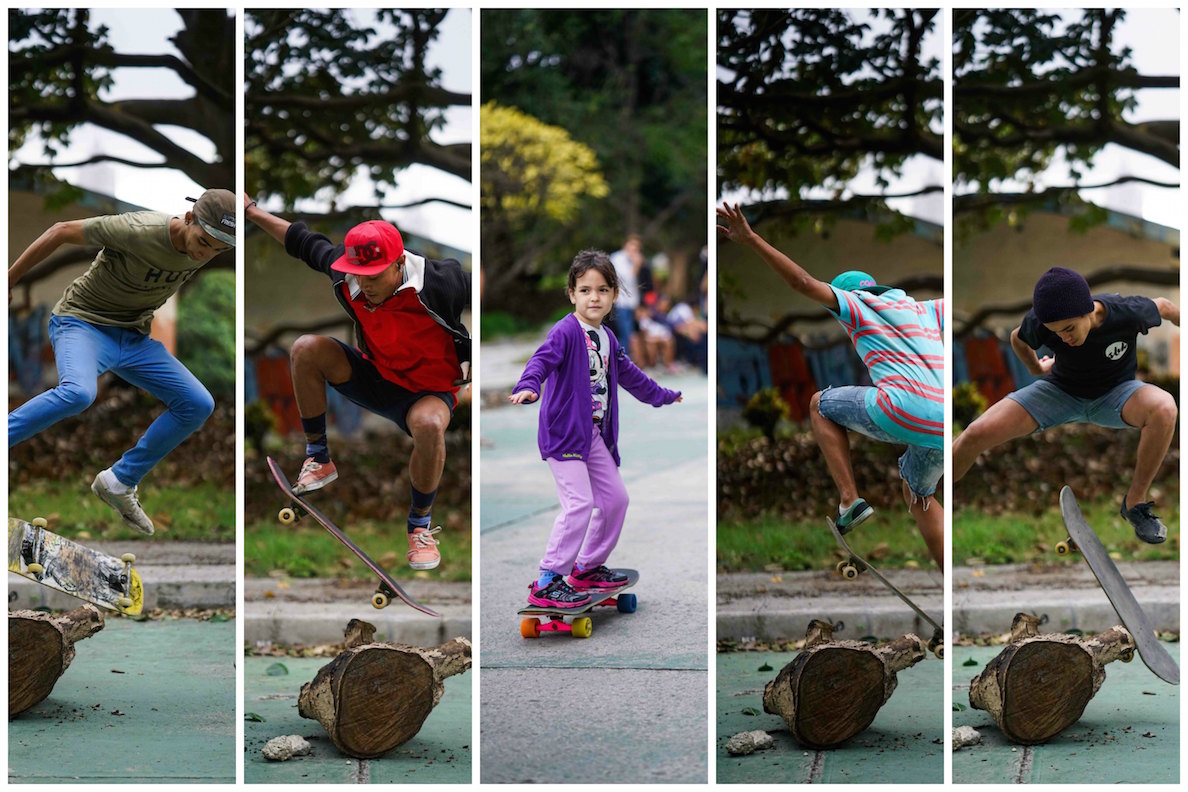 Speaking of skaters, I had the chance to hang with some and see a pretty alternative side to Havana. This was even beyond Centro, into the actual suburbs of Havana where adorable cars and pastel colours are a lot less common a sight. These youths risk having their boards taken away every time a cop passes, as skateboarding in Cuba is not a regulated and approved sport. 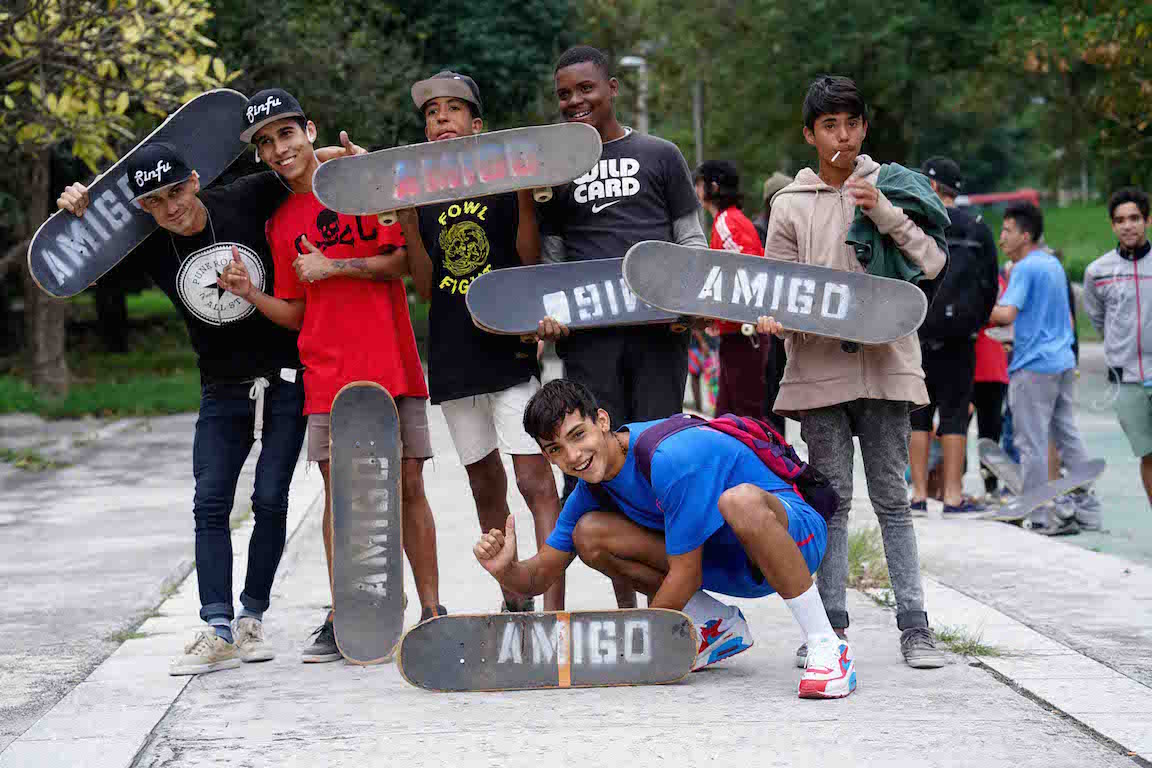 I was working with a non-profit who runs skateboards to Cuba and uses them as tools to inspire the youth of Havana. Each border run has the risk of more government attention or intervention, but they’ve seen first-hand the power and release of skateboarding with these kids. They’re called AmigoSkate, and they work hard to empower, support, and stoke up kids — boys and girls — around Havana as much as they can, knowing that they can be a generation that not only sees huge changes in Cuba, but brings them about. 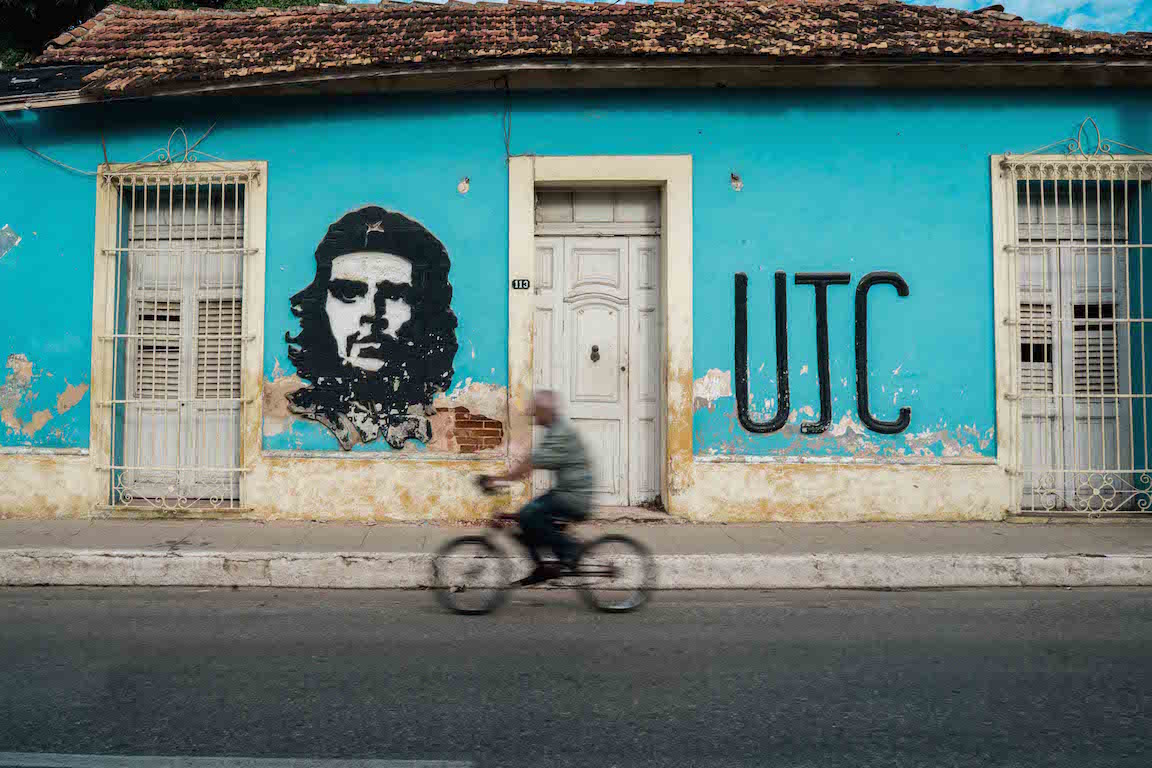 All in all, Cuba was this perfect balance of non-stop photo opps and laid-back culture. It challenged me to be really seeing these small, beautiful moments unfold but it also challenged me to sit back and enjoy life as it passes by. To embrace it, wholly. That meant embracing the lack of grocery stores and amenities (bare in mind I was pregnant … this was quite the obstacle for me), the lack of Internet (though, as a Canadian, I had roaming data which was amazing), the lack of diversity in the food (as import/export is still difficult), and a general lack of infrastructure overall. Of course it also meant to embrace all the wonderful things that Cuba has: music, rum, dancing, colour, movement, light, joy, a slower pace and a seemingly endless well of pride. It doesn’t mean Cubans don’t want changes in some ways and that the future of Cuba isn’t a hotly discussed topic, but that Cuba is more than politics. It’s a culture and way of life all to its own.

Tagged
Photo + Video + Film Galleries Cuba
What did you think of this story?
Meh
Good
Awesome