WE TEXANS TAKE OUR WILDFLOWERS SERIOUSLY, and not just because we’re treated to some particularly impressive blooms each spring. Much of the appreciation for wildflowers — and, more generally, native-plant ecology — we see nationwide today originated here in the state thanks to the work of Lady Bird Johnson.

Both during and after LBJ’s tenure in the White House, the First Lady promoted the study, distribution, and conservation of native plants in Texas and the rest of the country, helping found the National Wildflower Research Center in 1982, and the Lady Bird Johnson Wildflower Center in 1995, both located in Austin.

Texans today — organizations and individuals — have taken up the mantle, and if you’re in the state during wildflower season (mid-March through mid-May), there are tons of forecasts, sighting reports, and identification guides online that’ll tell you what’s blooming where. Here’s a peek at what you can expect to see during Texas wildflower season. Lost in a sea of bluebonnets

The bluebonnet is the Texas state flower, and if you visit during wildflower season, you'll likely see whole fields in bloom.
Photo: Donald Harper Contrasting the violet-blue of the bluebonnets is the hot red of the Indian paintbrush, also known as prairie-fire.
Photo: QQ Li Another common Texas wildflower is the Indian blanket, or firewheel.
Photo: mlhradio An up-close look at the spiderwort, which varies in color but most often manifests the blue hue seen above.
Photo: CameliaTWU 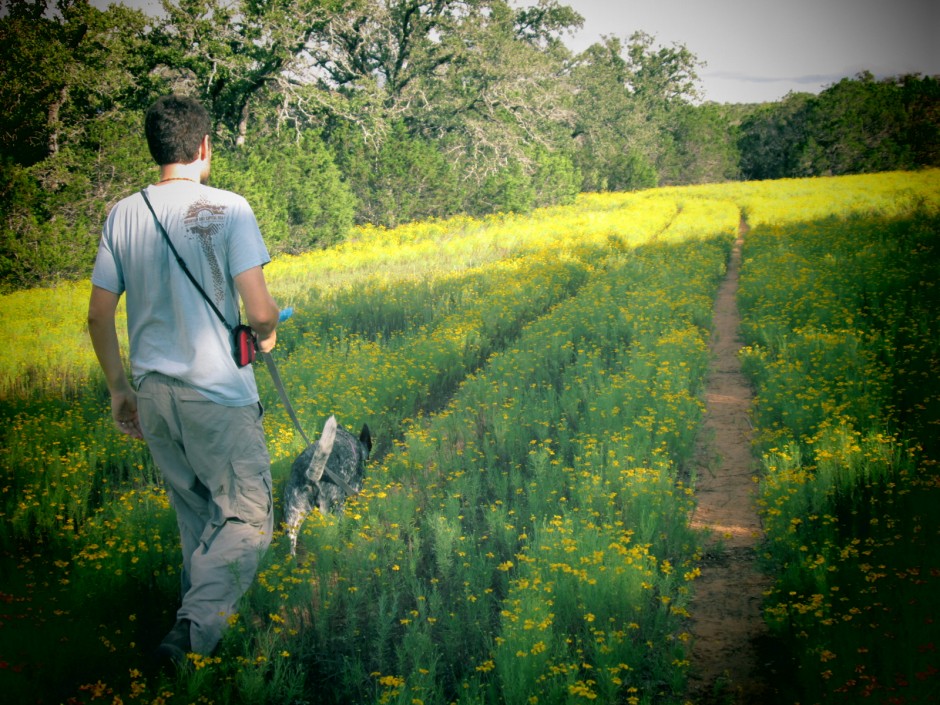 Me and the dog on a walk in Pedernales Falls State Park. The bitterweed was out in force.
Photo: Author A great example of the mix of colors and species on display during Texas wildflower season. This shot was taken at Old Baylor Park, in Independence.
Photo: Dave 77459 This species is native to Texas and is often sighted on roadsides.
Photo: Carol Von Canon This shot featuring a phaon crescent butterfly was taken near Grapevine Lake, in the DFW area.
Photo: Ken Slade A little post-processing texture work turns this shot of the Willow City Loop (near Fredericksburg) into a work of art.
Photo: Vicki Gibson Closeup of a bluebonnet off Highway 290 near Brenham.
Photo: Christine It's less the color of these blooms than the crazy fractalized geometry that's so striking.
Photo: QQ Li Wildflowers in the city

You don't even have to travel out to the country to see Texas wildflowers. These were blooming in the middle of Austin.
Photo: Mark Stevens An iconic Texas Hill Country scene: a field of bluebonnets, backed by the dipping limbs of a stand of live oak. This is one of those images that comes to the mind of a homesick Texas traveler.
Photo: Theodore Scott A little macro detail of the firewheel, as seen above in photo #3.
Photo: Joel Olives Bluebonnets in the fog

The morning fog makes the color of these bluebonnets pop even brighter.
Photo: Jason St Peter The name "bluebonnet" and the status of state flower of Texas actually encompasses multiple species of lupine.
Photo: faungg's photo Not all years bring equally impressive wildflower conditions. The timing and concentration of blooms depend heavily on winter precipitation and the spring warmup. Fortunately, this year is looking solid so far.
Photo: Jonathan Phillips Come on down. We'll treat you right.
Photo: Jack

Tagged
Galleries Texas, United States
What did you think of this story?
Meh
Good
Awesome

Everything You Need To Cook Texas Barbecue at Home, From Sauces To Smokers

Three Days in Black-Owned Houston: Retracing the Past, Stepping Into the Future

Houston Airbnbs To Experience the City's Food, Music, and History