At exactly 9:43am, an excruciatingly loud and garbled voice, full of deep, rolling Rs, jolted me from peaceful sleep: “Attention ladies and gentlemen. We are now beginning our descent into Mogadishu.”

For two years I had managed to avoid going to Mogadishu. “Avoid” is probably the wrong word, actually. I hadn’t “found the opportunity” to go to Mogadishu would be more accurate. I still wasn’t sure why I wanted to go. I could attempt to justify it as having something to do with being a journalist — that I needed to see it to write about it, that there are so many stories to be told, that danger, risk, and getting the breaking story is what real journalism is all about — yada yada yada.

But to be frank, in a P.J. O’Rourke Holidays in Hell kind of way, it was more to do with personal curiosity of what’s been brewing above the Kenyan border, behind the headlines, and a desire to explore the fragmented patchwork of informal existence that has kept Mogadishu on the rails through two decades of civil war.

Landing at Aden Adde International Airport, a mix of fear and wonder hammered my insides. I departed the plane, and got roasted. Jeans were a bad choice. 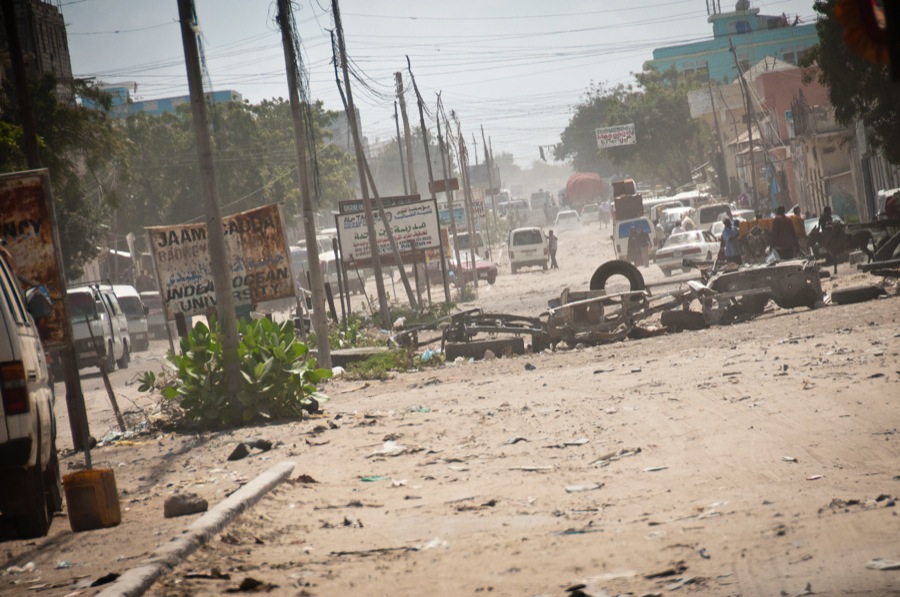 Though Mogadishu is going through a significant "rebirth," many parts of the city still lie in ruins. A street near Bakaara Market, where the infamous "Black Hawk Down" incident occurred 18 years ago, still looks like a war zone. 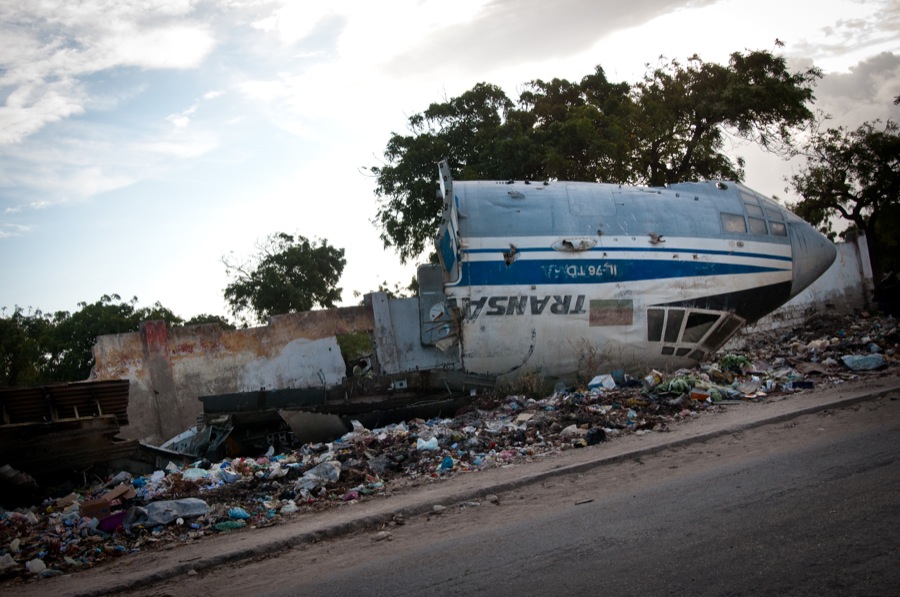 Mogadishu doesn't really have any big dumps. So, when someone was doing a bit of spring clearing of old debris from the runways of city's airport, they decided this side street would be a good home for the bits and pieces they found. The airport was previously more of a plane graveyard than an airport in any familiar sense, and the cleanup has made landing and taking off a far more pleasant experience. 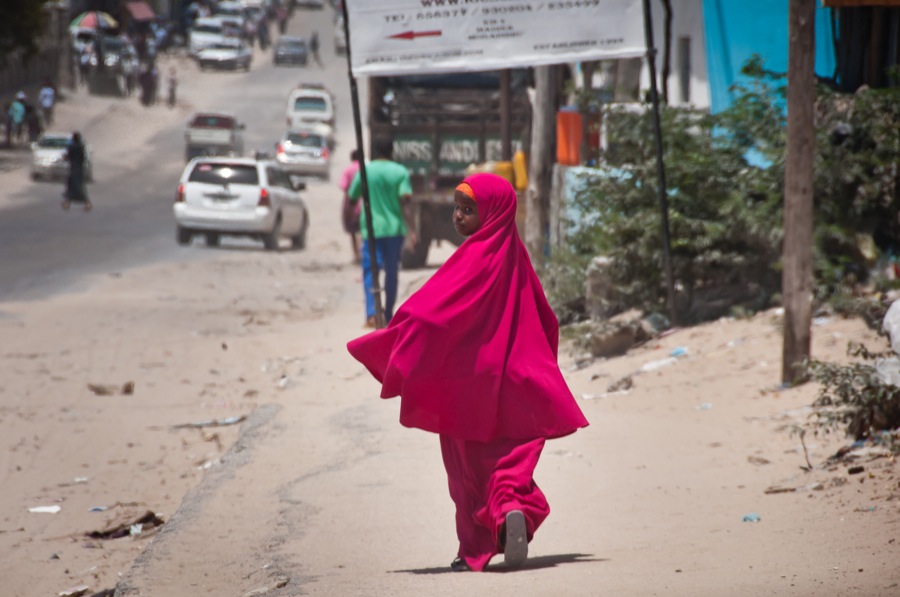 More so than ever before, Mogadishu's streets are walkable. Even at night1. 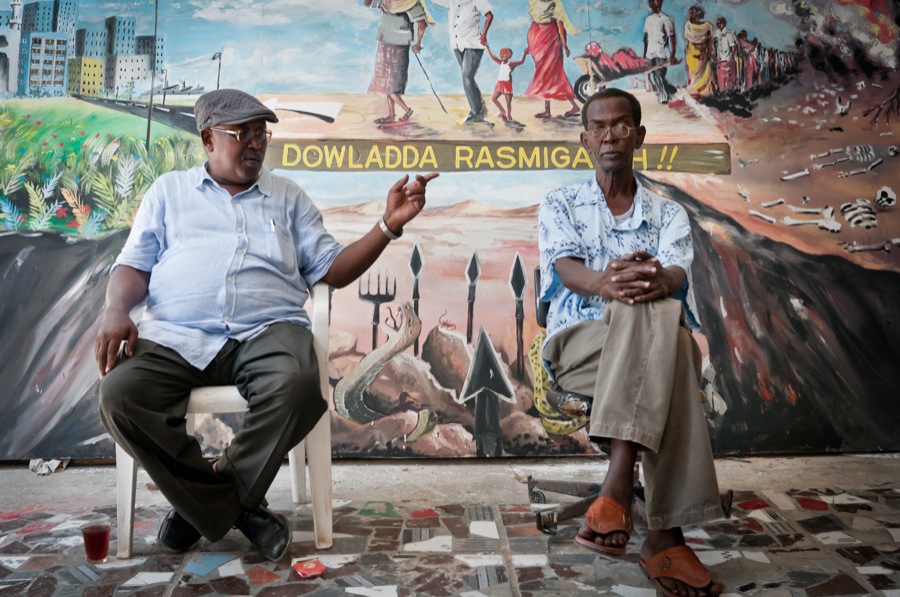 Mogadishu's world-famous artists, many of whom were trained in Italy and went into hiding for decades during Somalia's civil war (as Al-Shabaab suppressed most art, music, and anything involving fun, really), are re-emerging to help paint the city's future. 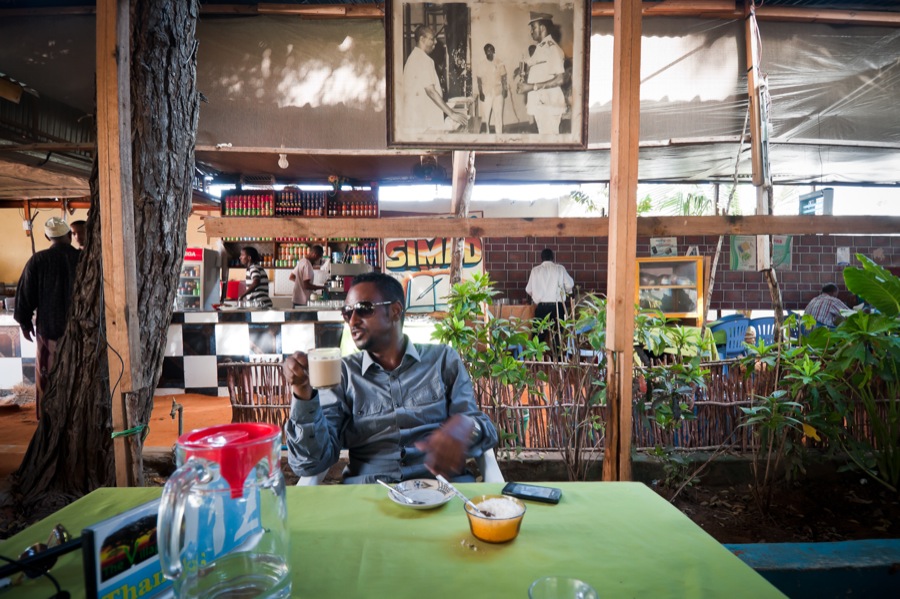 Liban Egal, the American-Somali founder of Somalia Wireless and the First Bank of Somalia (literally -- it's the first bank in two decades), enjoys an espresso at The Village Restaurant, one of many places in Mogadishu now offering wireless internet to customers. Strangely enough, charcoal-powered Italian espresso makers are now the standard in Mogadishu's cafes. Electricity is too expensive, and unreliable, for most cafe owners. A local entrepreneur imports broken espresso machines from Italy, and replaces the electric wiring with a charcoal heating system. This restaurant was attacked by two suicide bombers a few months later, killing one guard and the two bombers. 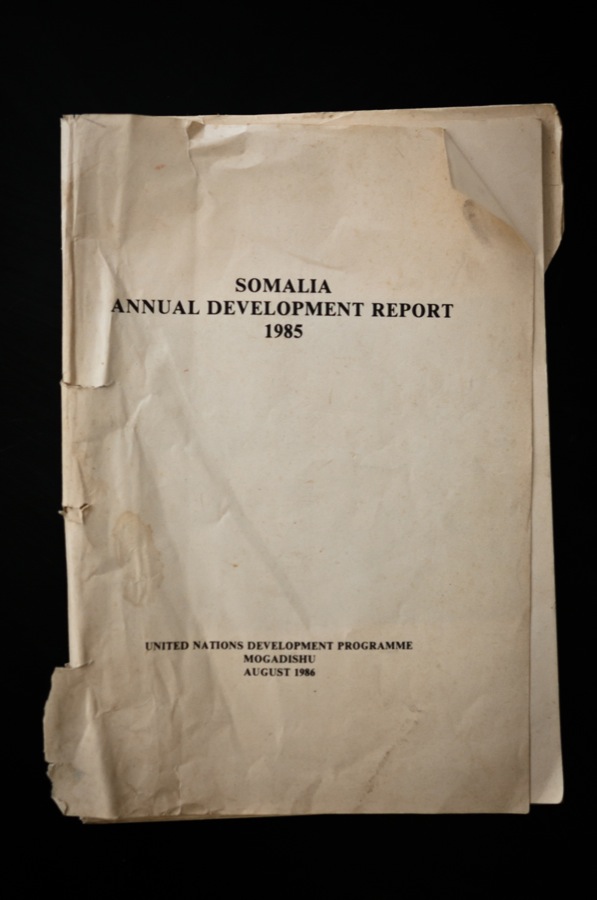 UNDP's Somalia Annual Development Report from 1985, lying in the archives of Daha Printing Press. One notable excerpt: “Currently, the government is not placing a high priority on the development of tourism. There nevertheless exists a considerable potential to exploit the attractions of the extensive and wholly unspoilt coast.” Some things never change. 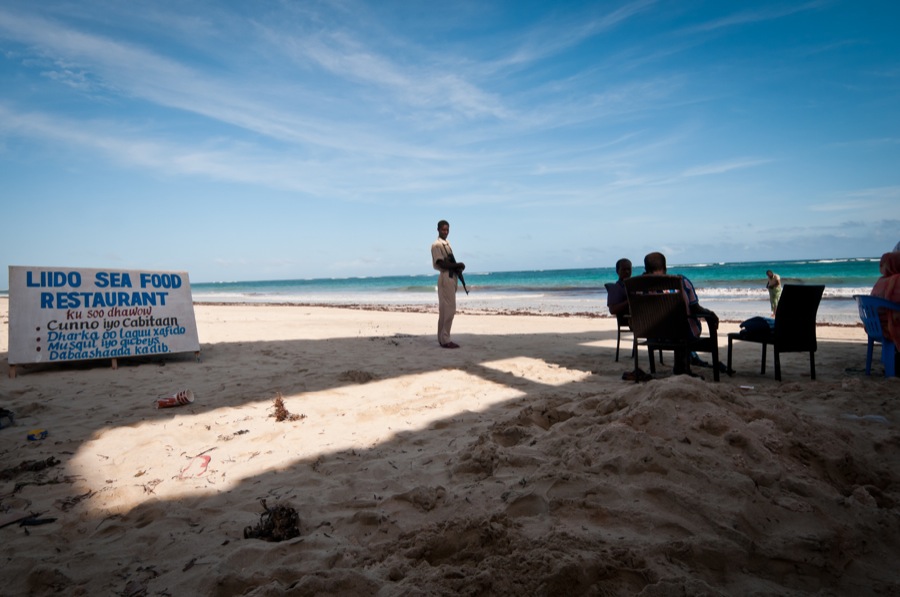 Lido Seafood Restaurant, opened less than a year ago by a group of Somali entrepreneurs, is hoping to revive Lido Beach, and is the first of many businesses the entrepreneurs hope will open soon. A few months after this was taken, the parking lot was the site of a nasty car bomb. One person was killed. Things were repaired, and the place is back in business. You can't scare customers away from good espresso and a beachside view that easily. 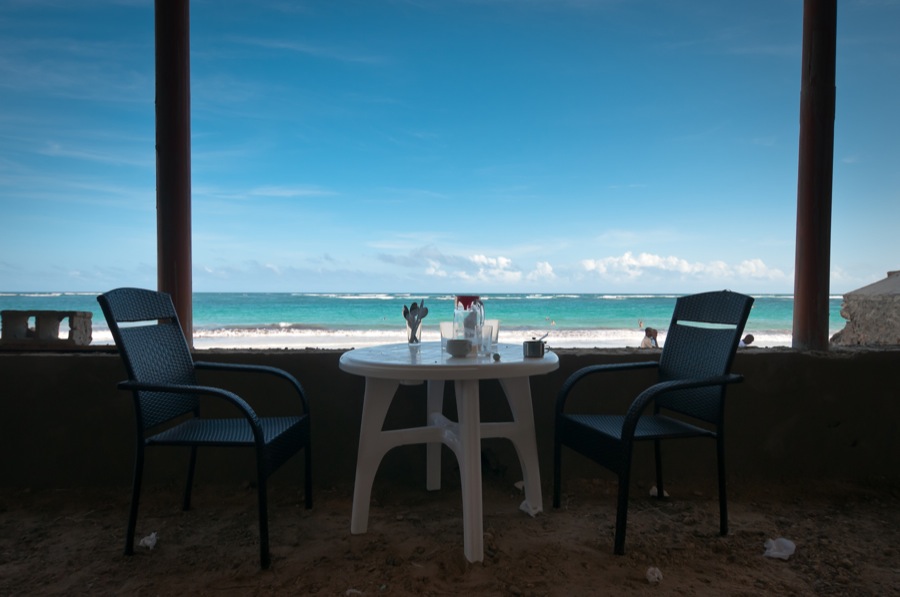 Lido Beach was Mogadishu's Miami Beach in the '60s and '70s, a vibrant, lively, and party-packed place where the city came on the weekends to kick back and go for a dip. In the decades since, it has become abandoned -- one of the most dangerous areas in Mogadishu. Now, people are slowly returning, the restaurants are opening up, and it's become a great spot for an espresso, some shisha, and a quick dip in the ocean. 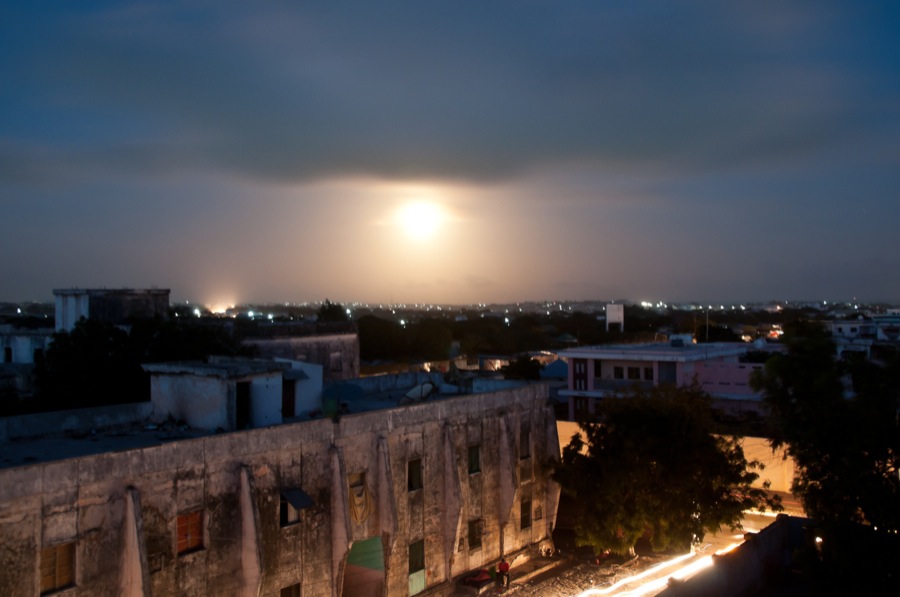 The beautiful night skyline of Mogadishu. Slowly, the glow of wireless antenna receivers are replacing the glow of stray bullets. 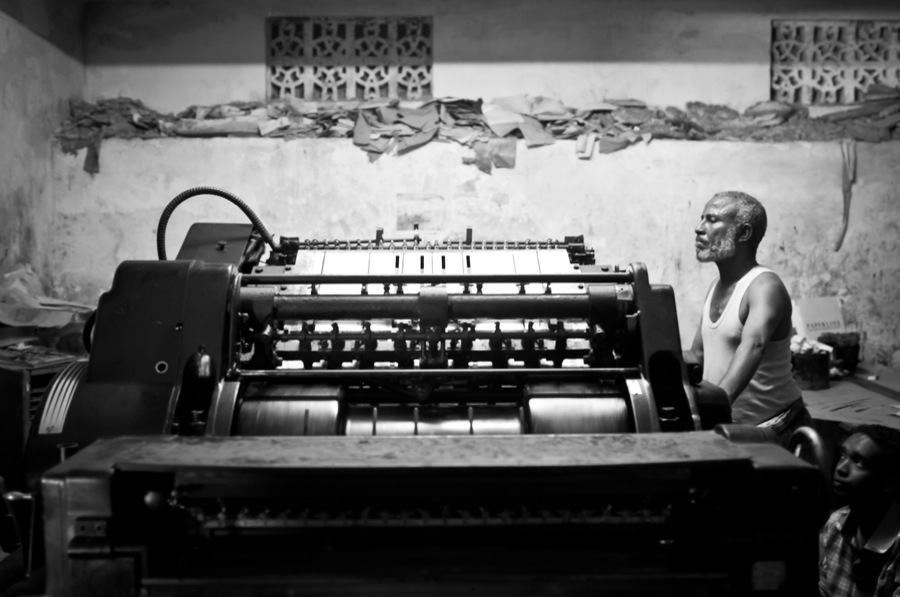 In a tiny, damp, oil-soaked cellar tucked behind one of Mogadishu's bullet-pocked central streets lies Daha Printing Press. For 45 years, the press has accumulated an inked archive of Mogadishu's intricate, vibrant, and violent political and social history. As governments, dictators, warlords, and militias battled for control of the streets above, Daha operated like a well-oiled machine, printing for all who walked in their door. Everybody, it seems, has something to print. Here, Kasim Sheik Ahmed, 60, oversees production of customs declaration forms for Mogadishu's busy port. The same exact forms his father printed at Daha in the late '60s -- in both Italian and English -- are being repurposed for the new government.

Living in Mogadishu used to be “hell.” Here’s what it’s like now.