OVER THE LAST FEW MONTHS, Matador has published articles, photography, and video that show exactly what makes Oakland great. We’ve looked at the remarkable ethnic and cultural diversity of the East Bay; we’ve charted a week in the nightlife of the city; we’ve showcased the one-of-a-kind art and architecture on display; we’ve even mapped 30 incredible places located less than a four-hour drive from Oakland.

In the process, we’ve come across countless images that do a wonderful job of depicting the spirit of the city, and which have stayed in our minds for their beauty and inspiration. Here are 33 of our favorite.

Looking west from the Oakland Hills, you can see the entire city spilling out before you, touching the waters of San Francisco Bay, and then gaze on to the coast. This image also illustrates how cloud cover and fog typically remain on the other side of the bay.
Photo: Franklin Hunting 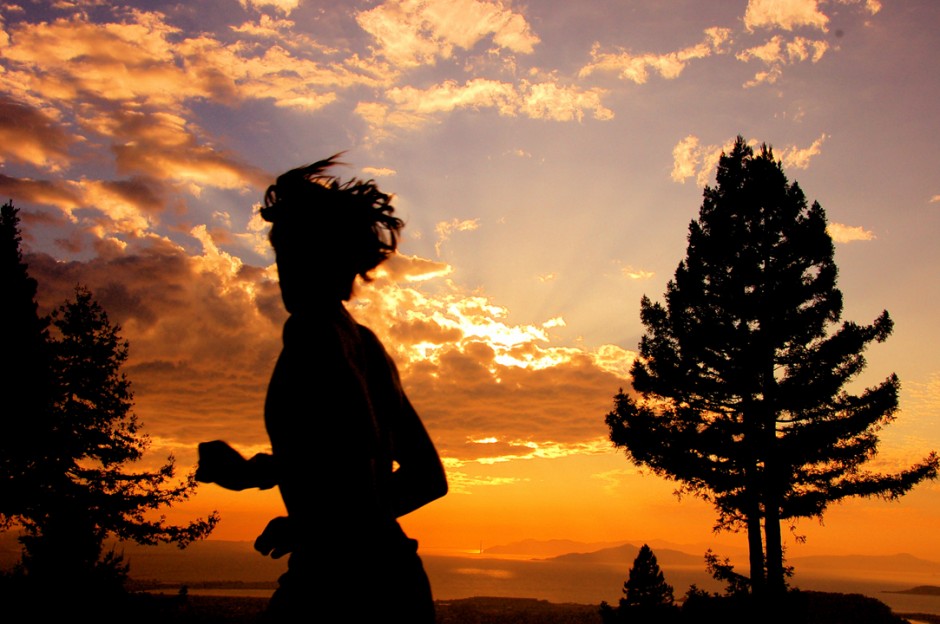 A different view down to the bay, captured during a sunset jog. There's so much potential to get outside and active in and around Oakland.
Photo: Brook Anderson, courtesy of Visit Oakland 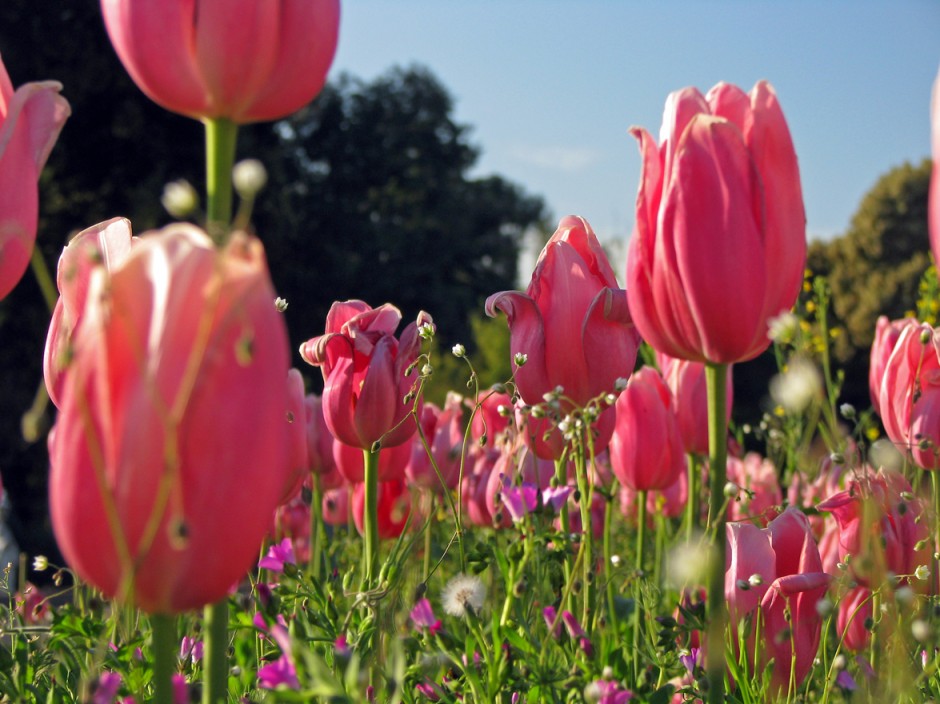 Tulips are among the many varieties of flowers that grow well in Oakland's temperate climate.
Photo: Tom Holub, courtesy of Visit Oakland 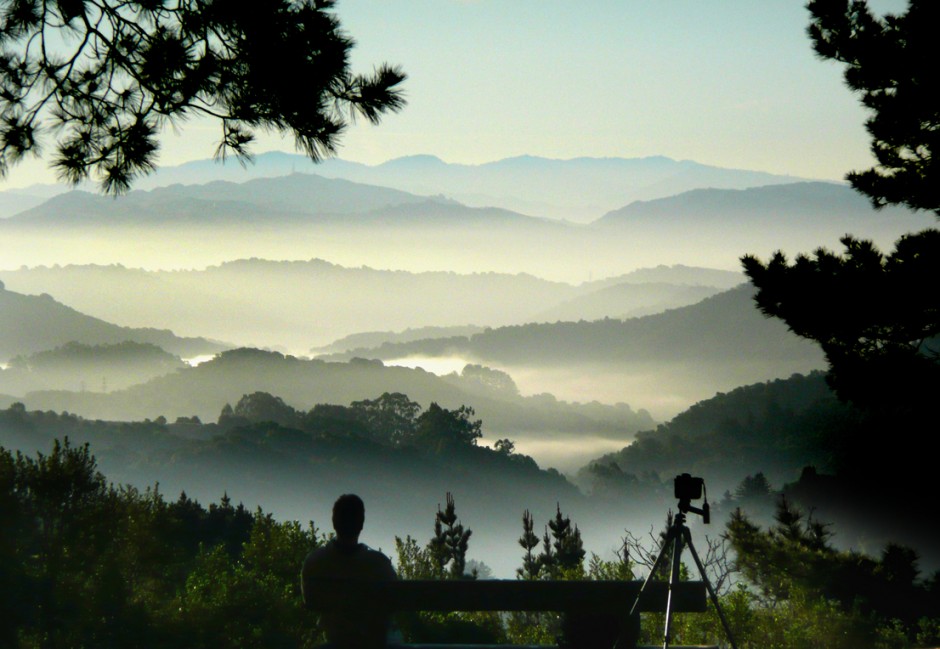 This is Oakland too

While Oakland is part of one of the largest metropolitan areas in the country, it also sits on the doorstep of some incredible natural areas. Head to the Oakland Hills and look east, and this is what you'll see.
Photo: Gary Pope, courtesy of Visit Oakland

This stunning portrait was capture at Art Murmur, Oakland's monthly art walk. Find out why everyone cool and creative is moving to Oakland.
Photo: Amir Aziz 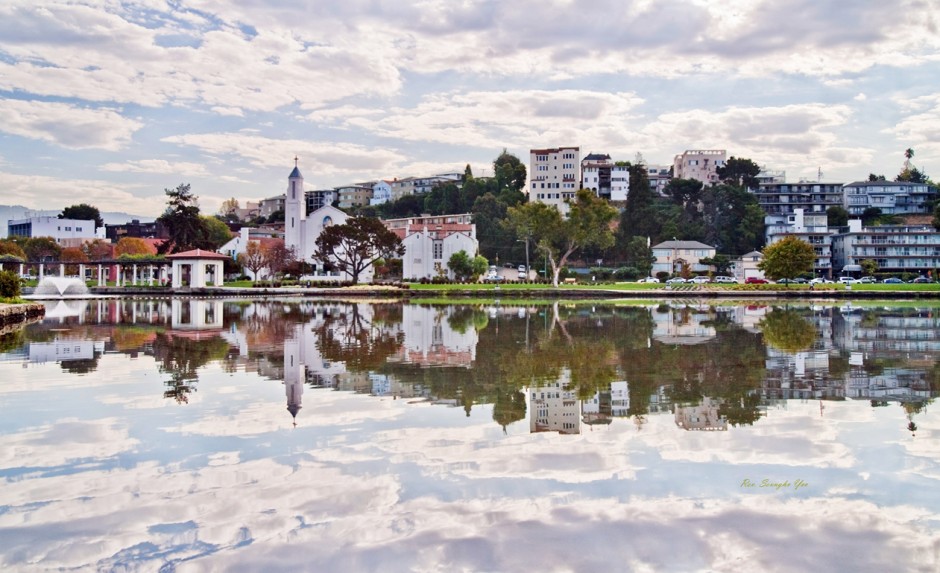 Built in 1914 to house Kahn's Department Store, the Rotunda Building is now an upscale event space and sought-after wedding venue in downtown Oakland. The centerpiece of the structure, the dome, is 120 feet high and measures 5,000 square feet.
Photo: Brooke Anderson

Read more: 11 underground spots in Oakland to check out before they go mainstream 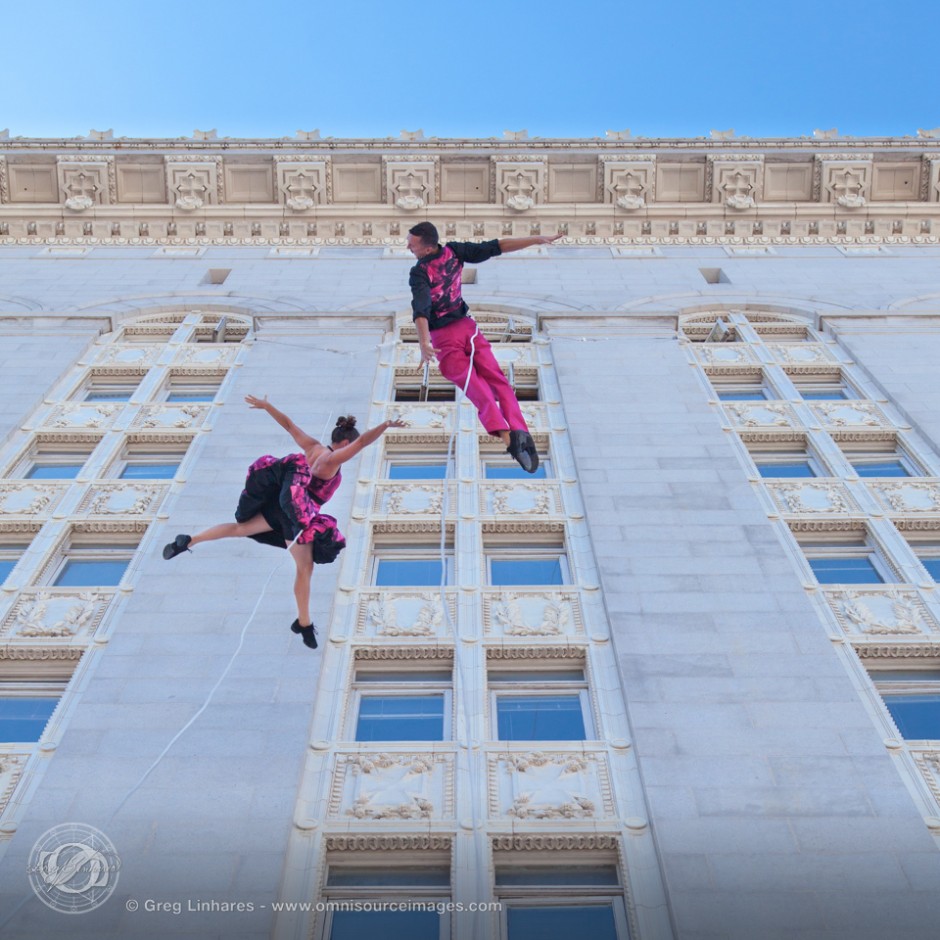 Performers with the troupe Bandaloop dangle and dance from the face of Oakland City Hall during the 2014 Art+Soul Festival.
Photo: Greg Linhares, Omni Source Images 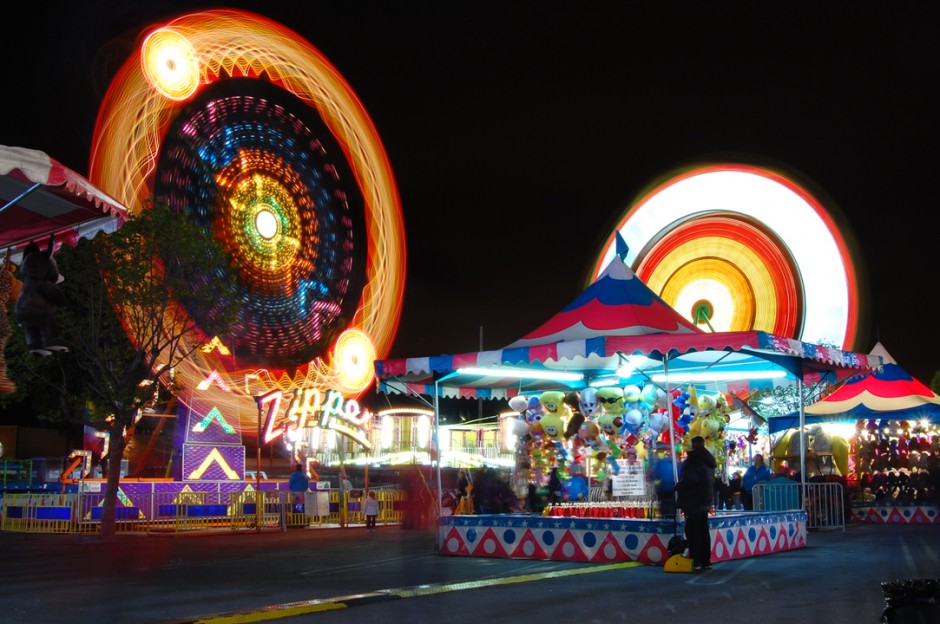 The night's entertainment at one of Oakland's many street fairs.
Photo: Marlo Lao, courtesy of Visit Oakland 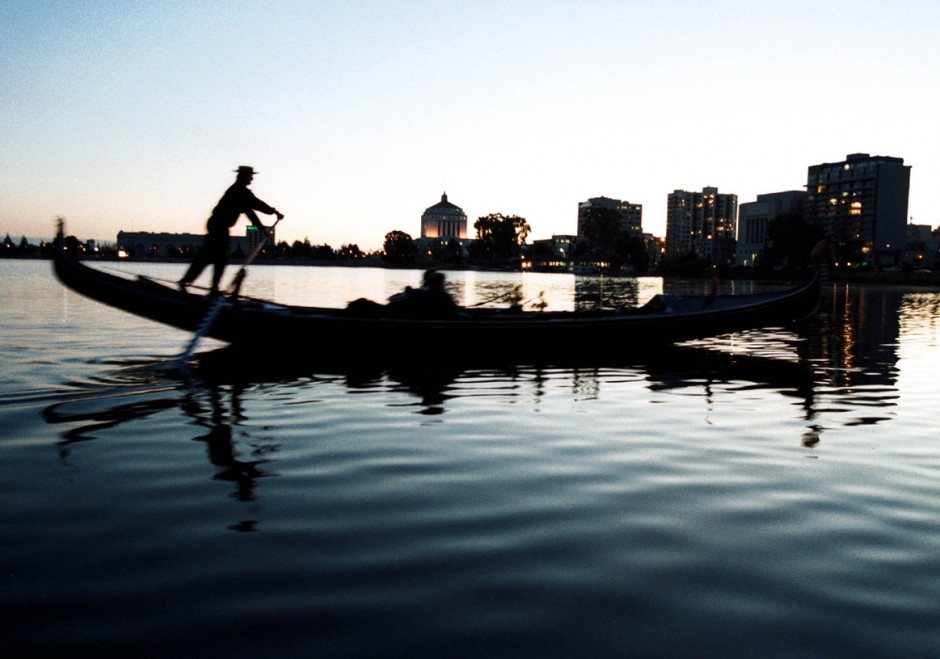 Watch the video: This is what makes Oakland great 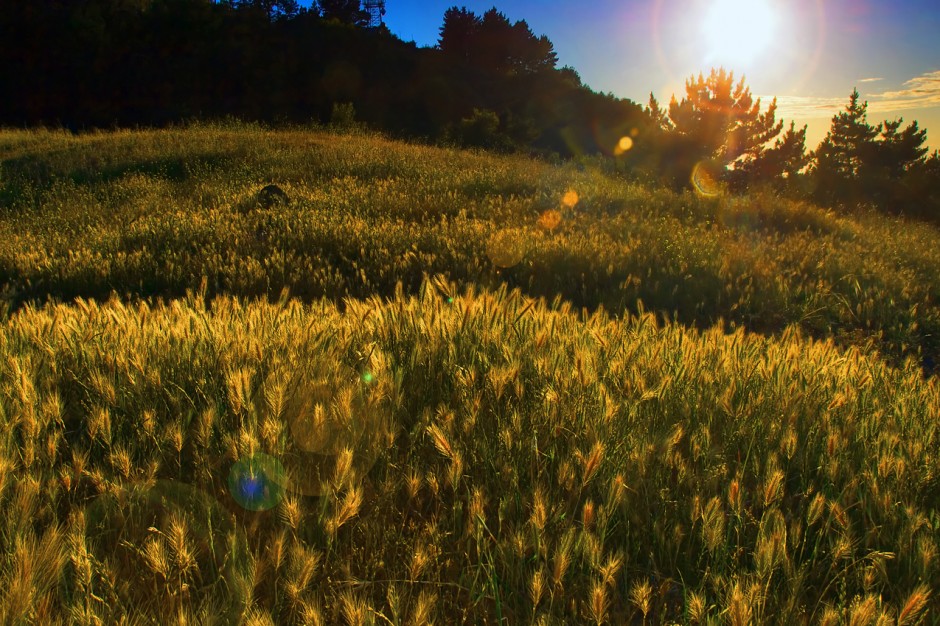 A sea of gold and green provides a perfect escape from the city in the Oakland Hills.
Photo: Jerry Ting, courtesy of Visit Oakland 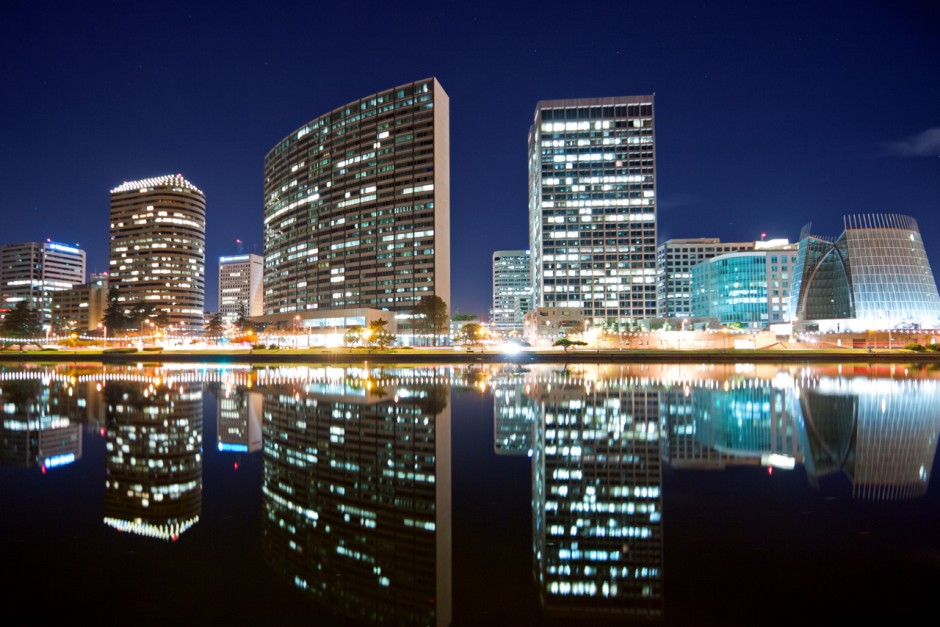 At night, the still water of Lake Merritt casts reflections of the Lakeside Dr / Harrison St skyline, including the Cathedral of Christ the Light (visible at right).
Photo: Natausha Greenblott, courtesy of Visit Oakland

At dance studio New Style Motherlode, you can sign up for dance and fitness classes for the whole family.
Photo: alan kimara dixon 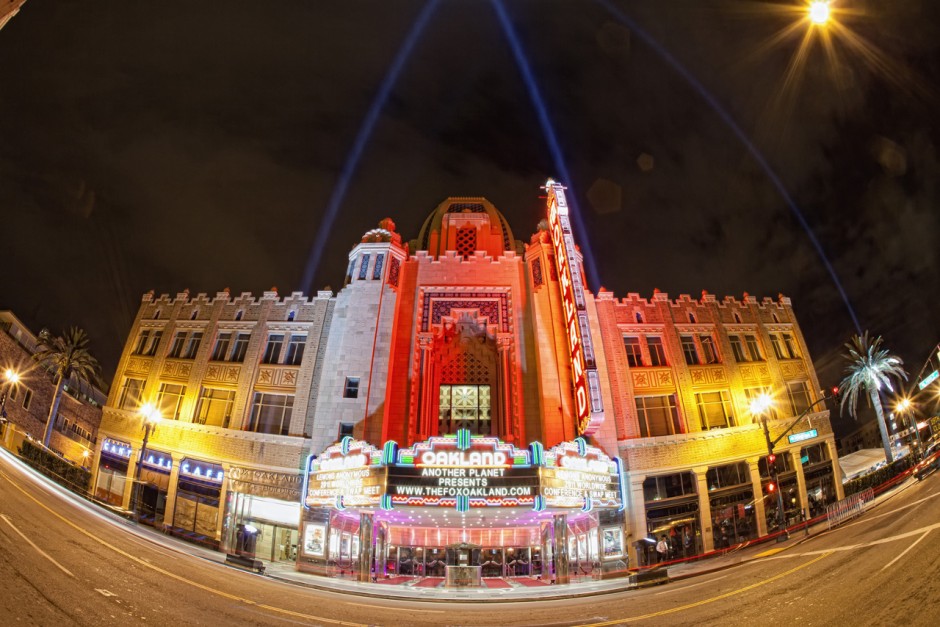 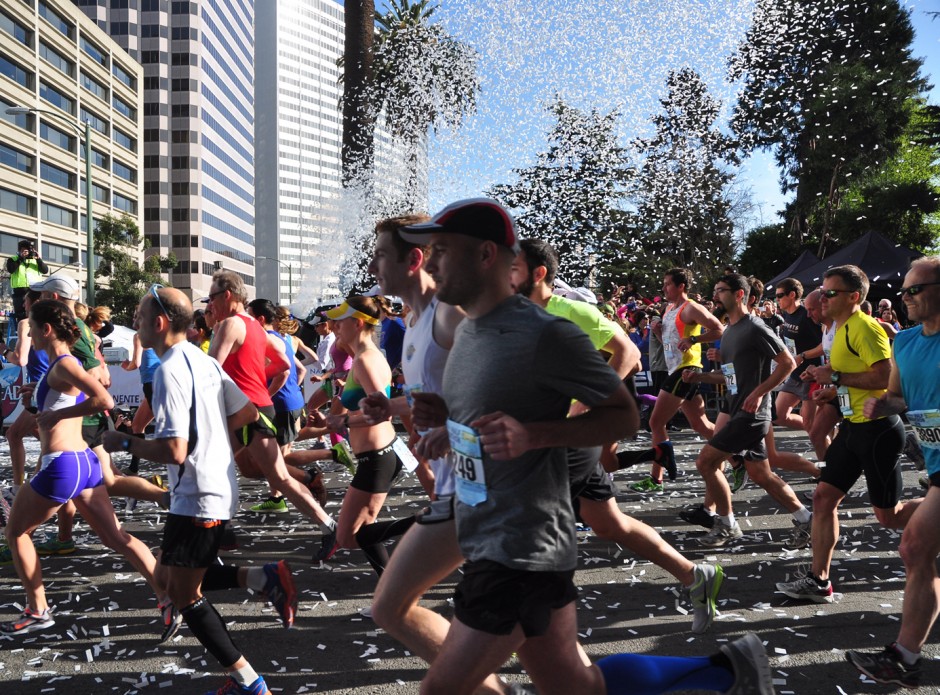 The Oakland Running Festival, which features a marathon in addition to other running events, takes place in the spring and is considered one of the country's top races.
Photo: Ken Katz, courtesy of Visit Oakland 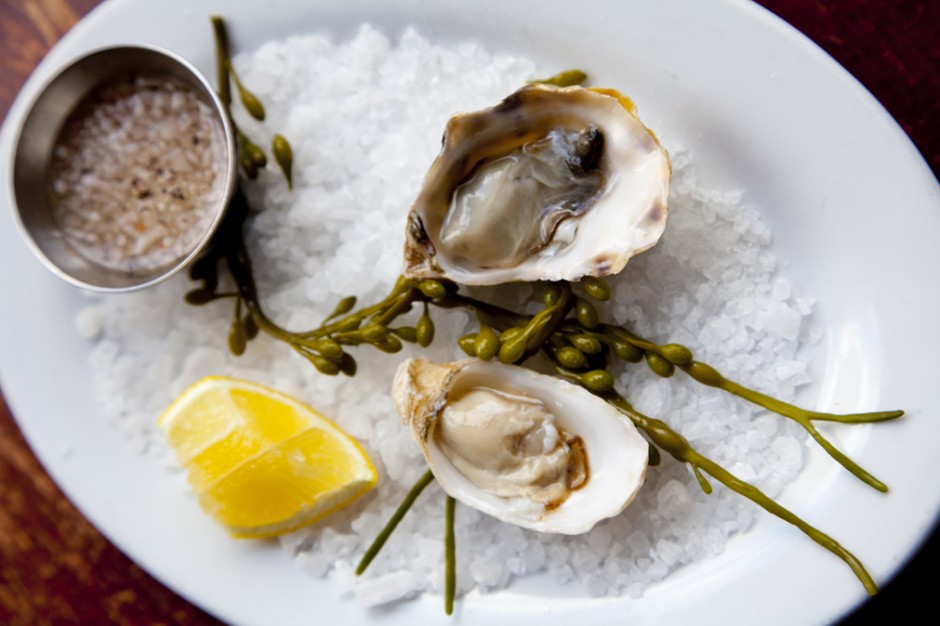 On the half shell

Oakland's West Coast location and active port give it access to incredible food from all over the world—not the least of which is fresh seafood. Grab a plate of gourmet oysters at Luka's Taproom on Broadway.
Photo: Visit Oakland

Hometown sports pride, brought to you by the fan base that invented the Wave and fantasy football.
Photo: Nicole Abalde

Public transportation in the Bay Area comes in many forms—sometimes, the quickest way to get where you're going involves a ride on the ferry.
Photo: Mariam Marie 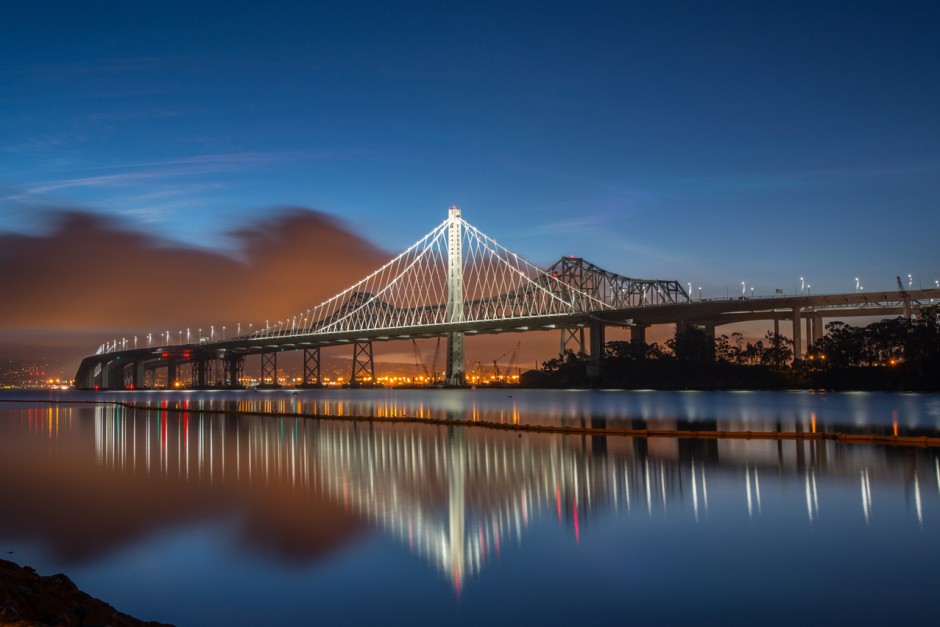 Construction of the attractive self-anchored suspension bridge (lit above) was completed last year, and it now serves as the eastern span of the San Francisco-Oakland Bay Bridge, connecting Oakland to Yerba Buena Island. Among the span's many attributes (including being considered the widest bridge in the world) is that, for the first time, it provides access to pedestrians and cyclists to traverse the bay.
Photo: Darrell Sano, courtesy of Visit Oakland 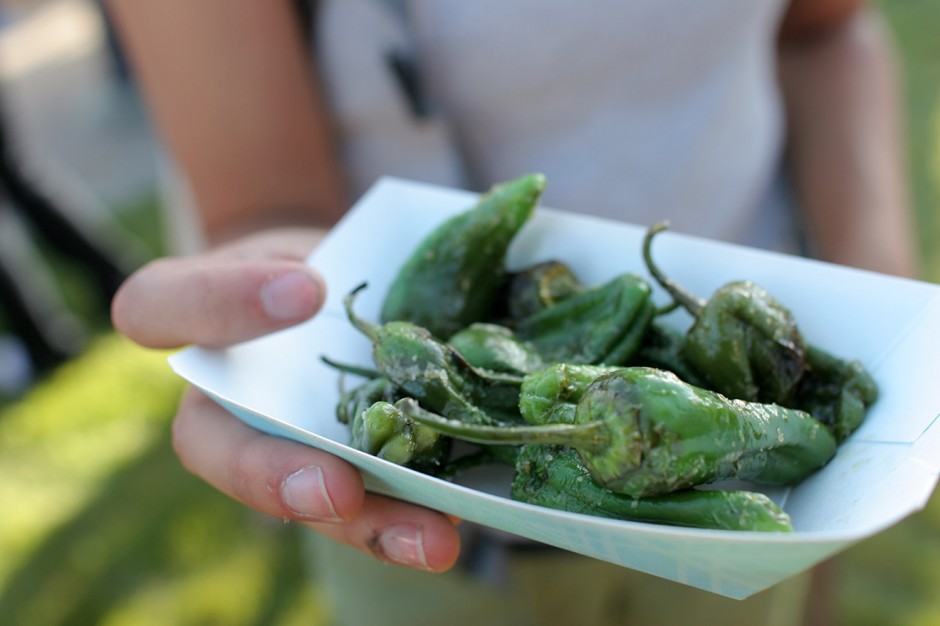 Be it at a market, food truck, or street fair, grab-and-go (and delicious) street food is all over town.
Photo: Phillip Yip, courtesy of Visit Oakland

The Oakland California Temple was one of the earliest operating temples of the Church of Jesus Christ of Latter-day Saints, built in 1964. It's located in the Oakland Hills with great views of the city and bay.
Photo: Alma 7:12 (sticker trading)

Challenging the stereotype of a foggy Bay Area, Oakland sees an average of 265 days of sunshine a year.
Photo: George Kelly

The art scene in Oakland is strong and growing stronger, with museums, studios, and dozens of high-profile galleries. Pictured above is curator Svea Lin Soll at Swarm Gallery in Jack London Square.
Photo: SWARM GALLERY OAKLAND 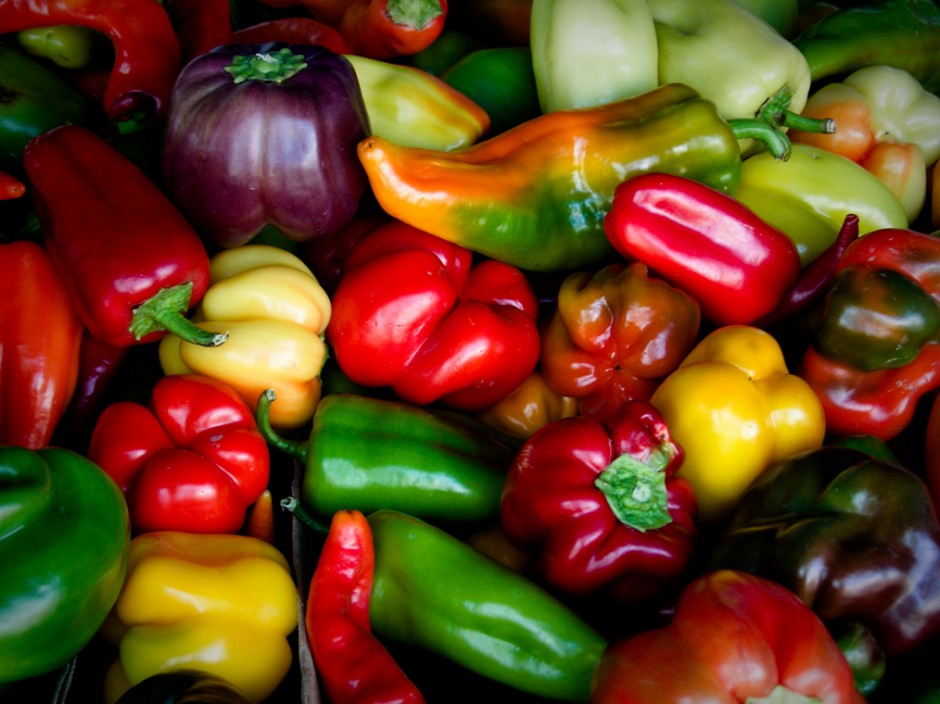 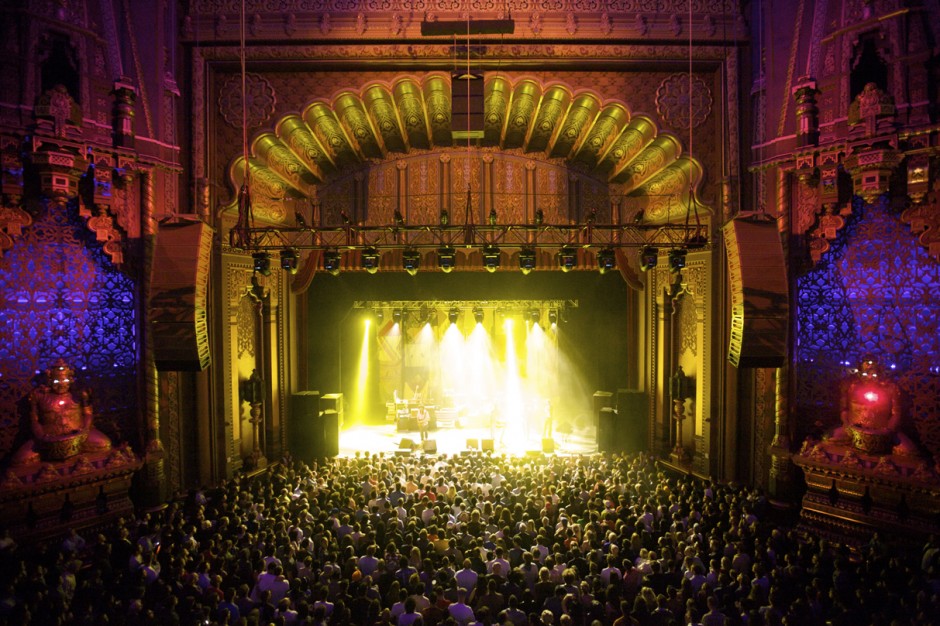 Mountain View is more than a cemetery. Its location in the hills above Oakland makes it a popular picnic spot.
Photo: Sonny Abesamis

You don't have to head west or north from Oakland to see the world's tallest trees. Redwood Regional Park is just a few minutes' drive east of town.
Photo: Miguel Vieira 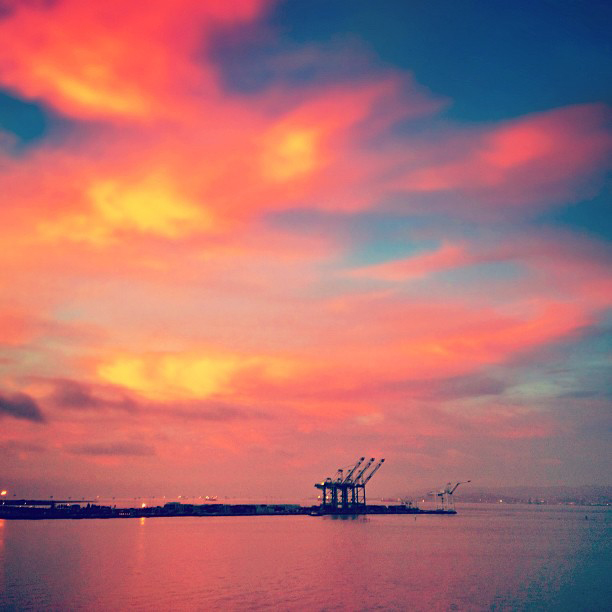 Sunset over the cranes

The Port of Oakland is an active container ship facility, visible for miles around thanks to its iconic cranes standing like sentinels on the shore.
Photo: Visit Oakland 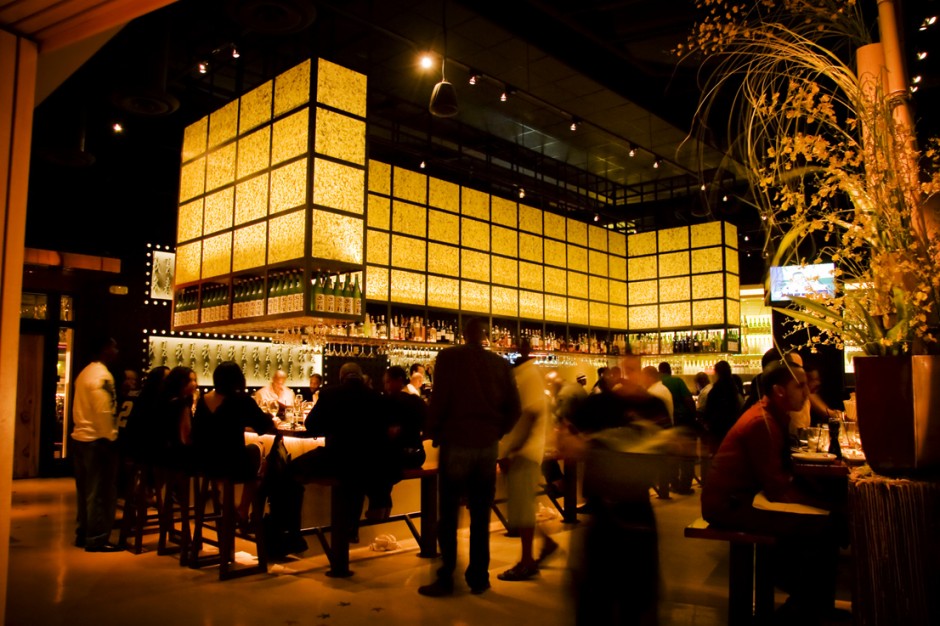 You can find so many cuisines in Oakland it would be a challenge to try them all. Uptown's Ozumo is a recommended spot for Japanese.
Photo: Ozumo, courtesy of Visit Oakland 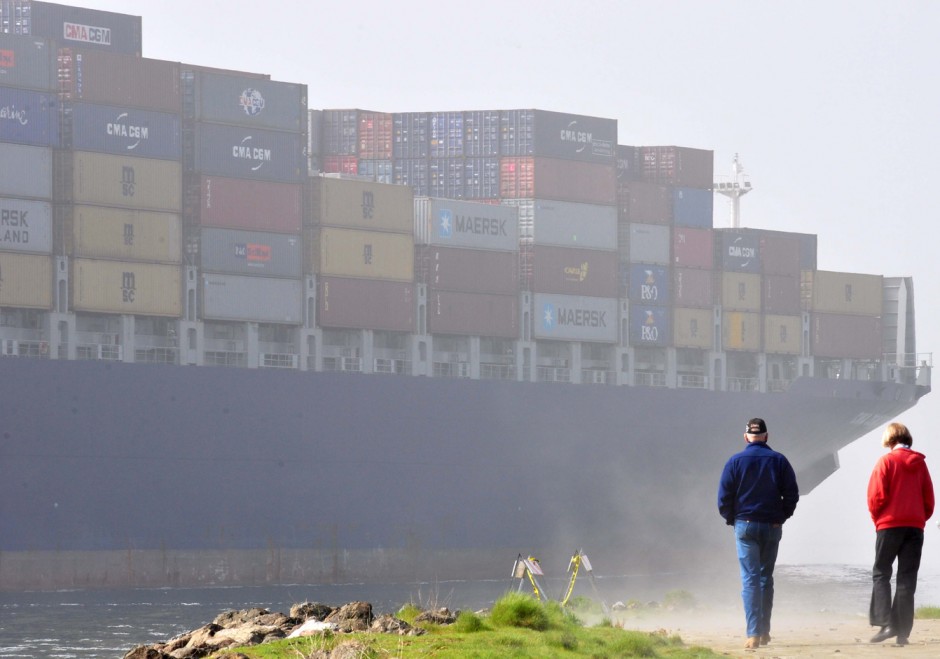 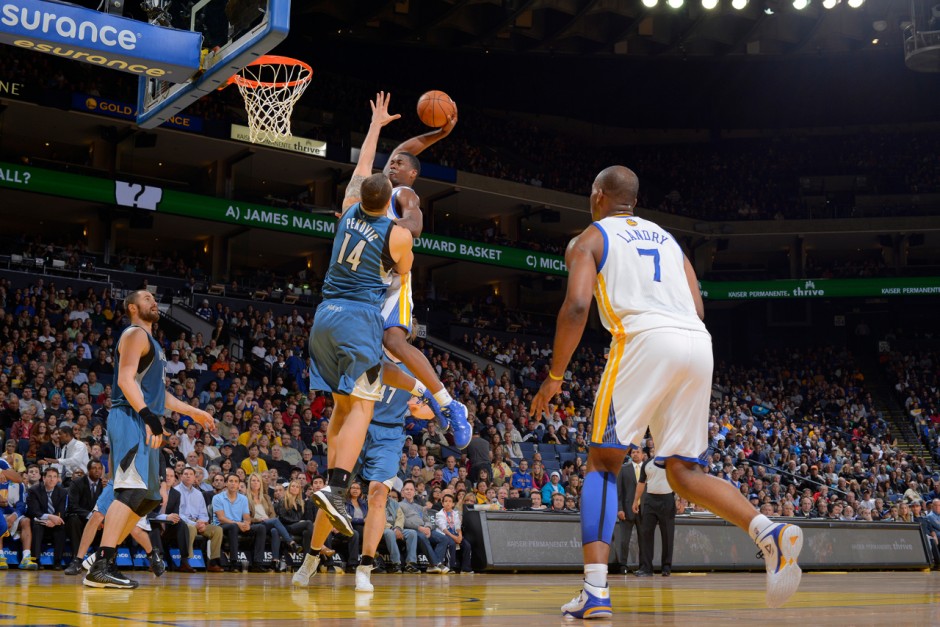 Golden State in the paint

Golden State Warrior small forward Harrison Barnes gets way up for a dunk against the Minnesota Timberwolves. The Warriors are one of Oakland's three major-league sports teams, and proof of why this town is one of America's premier sports cities.
Photo: Visit Oakland 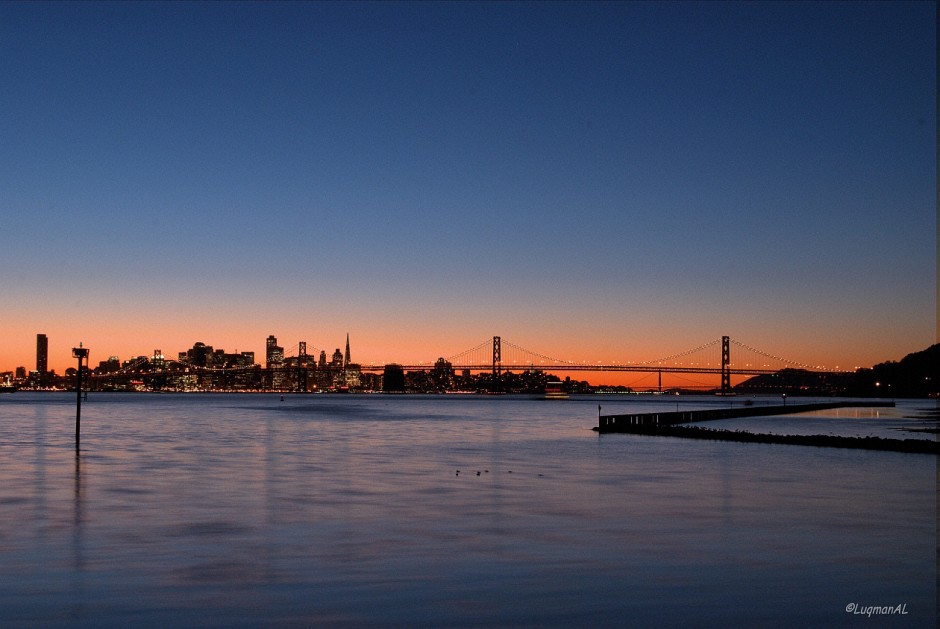 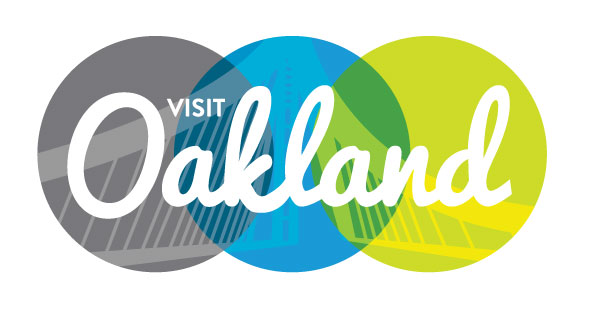