LAST YEAR, I EMBARKED ON A SOLO TRIP around the Land of the Golden Pagodas: Myanmar. One of the things I love most about solo travel is that it pushes you to meet people — not only other travelers, but locals as well. In my days alone in Myanmar I had the honor and gift to meet a number of locals who each left an impact on me, an exchange that I carried with me through the trip, and home, like charms on a bracelet.

Myanmar has more than 100 different ethnic groups — 135 distinct ones last I checked — so it would be unwise of me to claim I encountered all of them. I barely scratched the surface of Myanmar, but what — and who — I was able to experience will be with me constantly, and always calling me back. Here are 12 people from Myanmar that I am honored to have met and photographed. 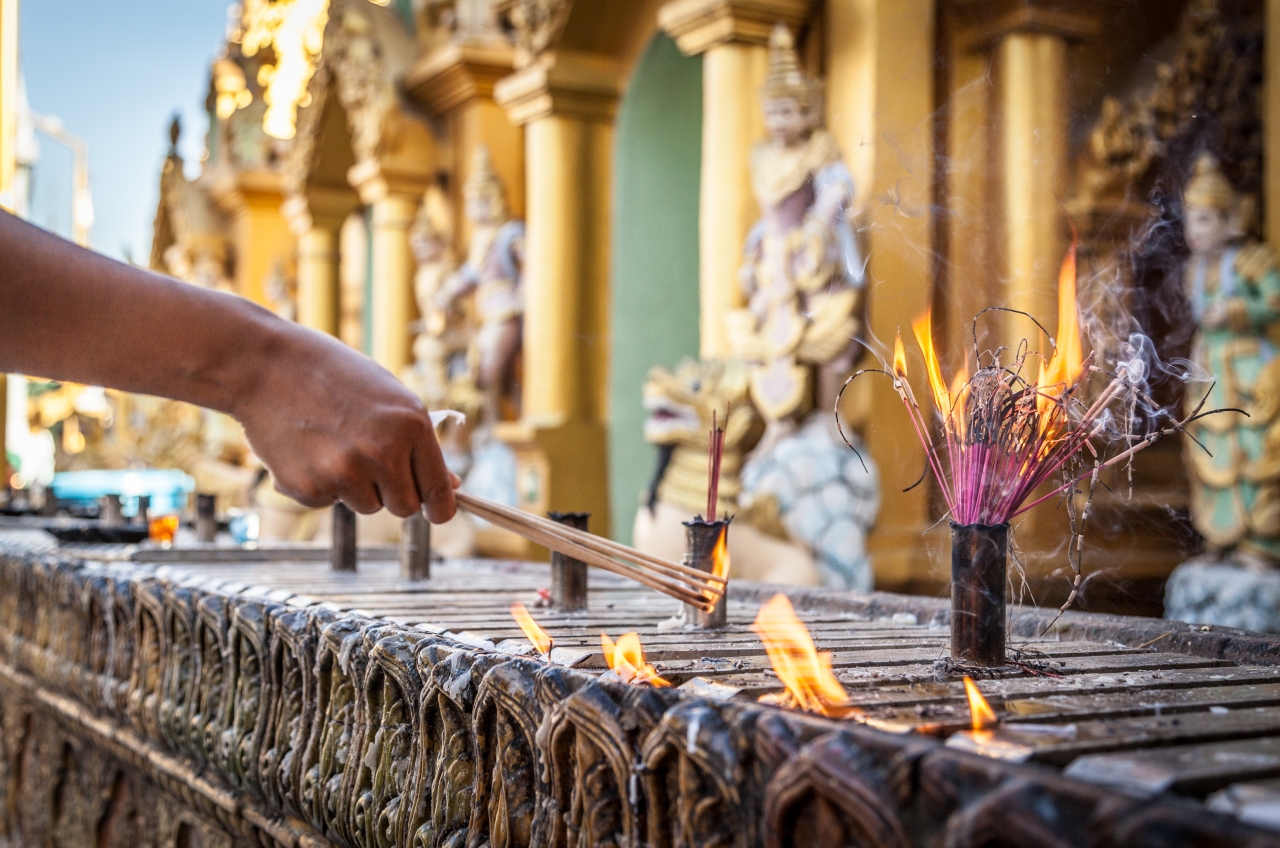 To make a light

I began my trip in Myanmar's largest city, Yangon, at an ancient religious complex called the Shwedagon Paya. I found it to be an excellent introduction to the country: 80 percent of the population claim Buddhism as its religion (the remainder being made up of Christians, Muslims, Animists and small pockets of Hindus) and people travel on pilgrimages from far-flung corners of the country to circumambulate the giant golden stupa found here. 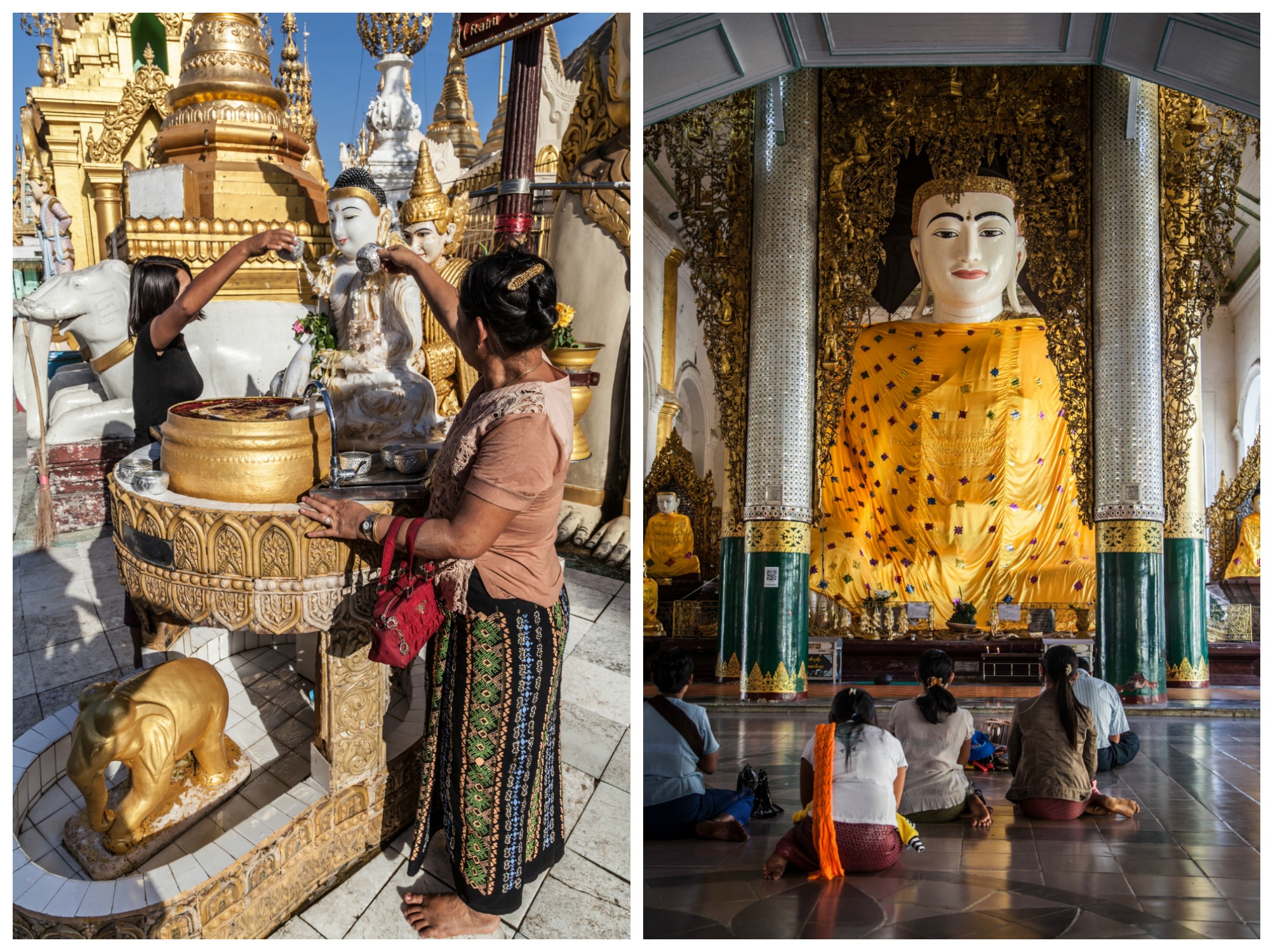 To wash a Buddha

Left photo: This mother and daughter saw me stuck in hesitation -- the intention of washing a Buddha statue but not knowing how. They waved me over quietly and wished to show me what to do. With their right hands, they scooped gracefully from a golden trough using small silver bowls, before pouring the water onto the Buddha's chest, every so often turning to me to smile reassuringly. 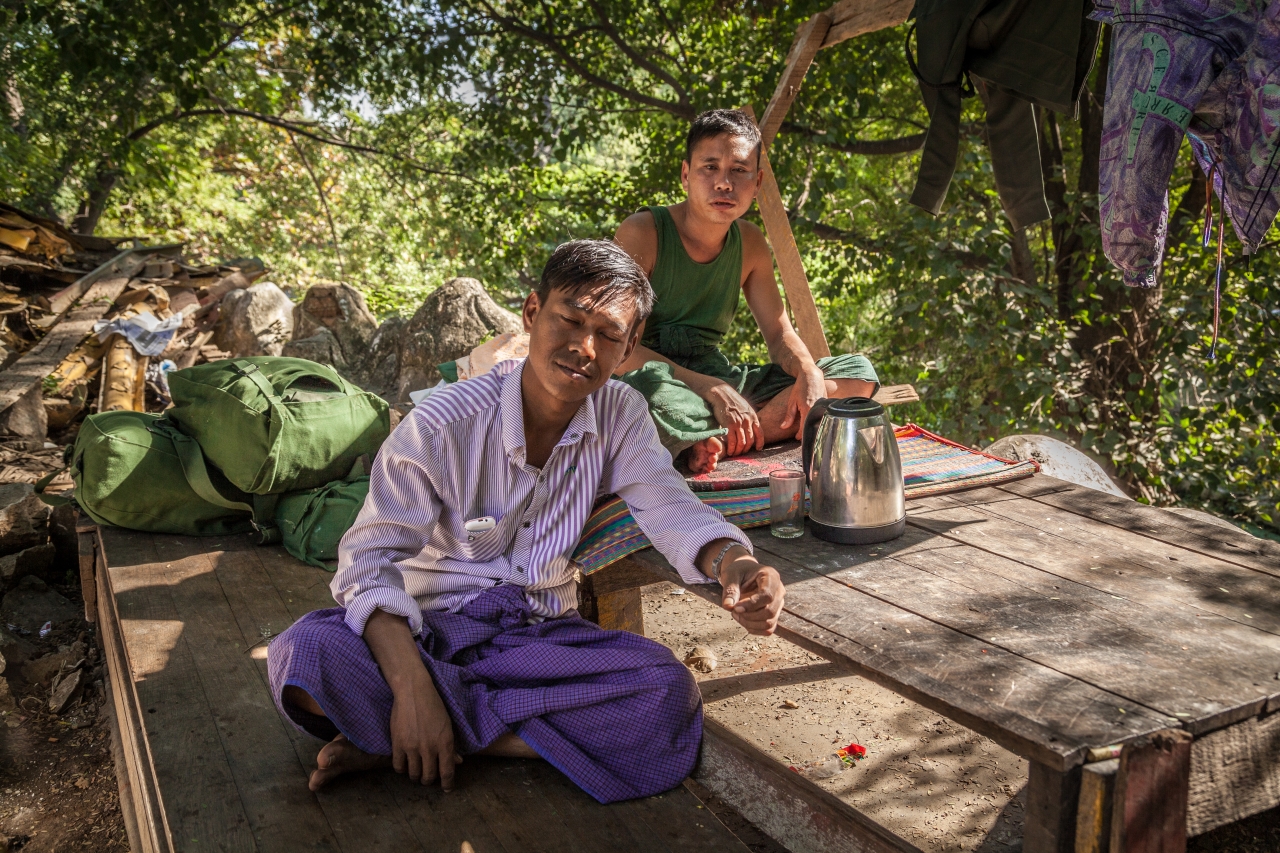 Thank you, thank you

Fifty meters beyond a sign that read “No Tourists Allowed Past This Point,” I found these men sprawled under a canopy of trees. A silver kettle and empty glasses with black flecks of leaves at the bottom suggested an afternoon whiled away drinking tea. I only came to know the name of the man on the left, Kyaw Lin, 32; the other remained smiling yet mute. When it was time for me to leave, Kyaw Lin grasped my hand, looked me in the eye, then repeated “thank you” four times, with such unaffected candor that the moment stays with me to this day. He closed his eyes, still shaking my hand, as if some unseen transfer of energy was passing between us. He seemed to want to log the memory of this moment away somewhere safe -- as it turns out, so did I. 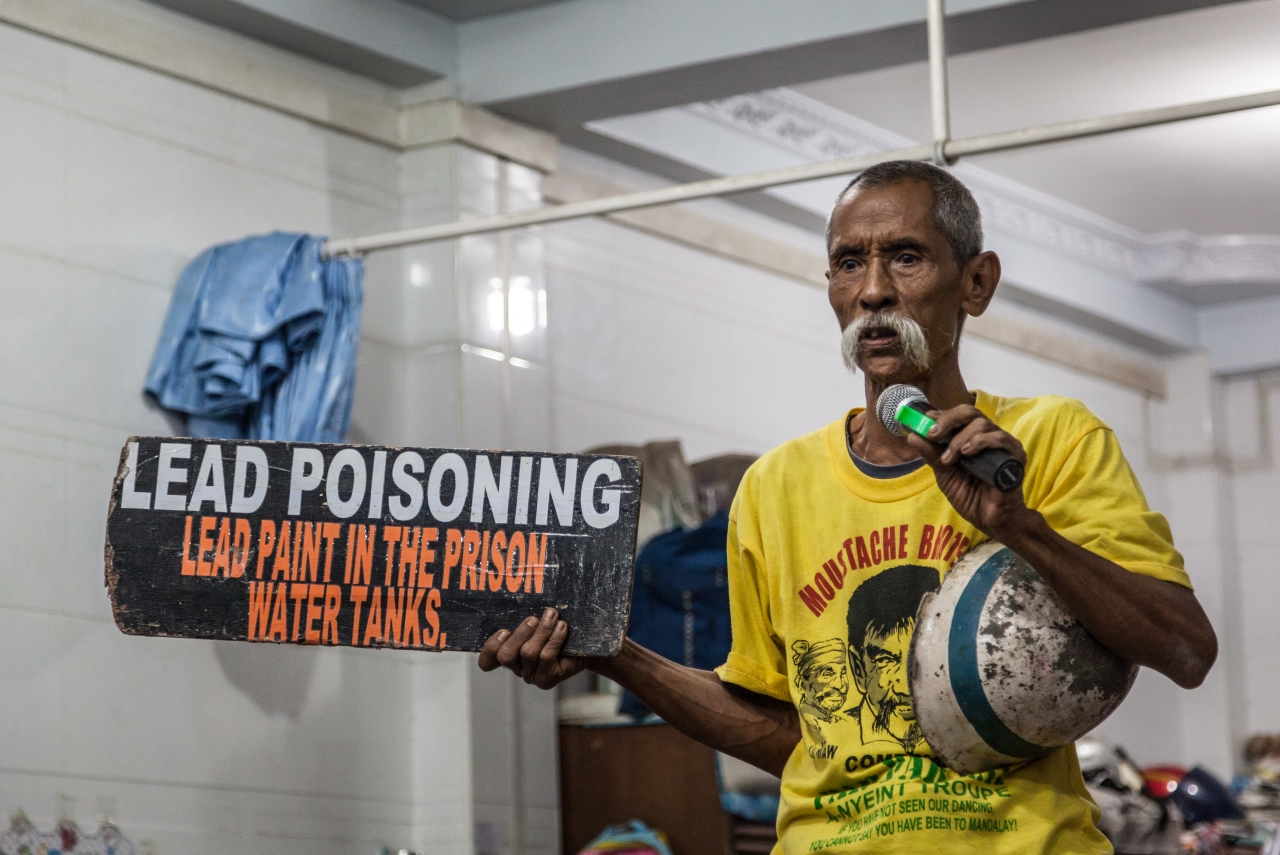 Lu Zaw (seen here), Par Par Lay and Lu Maw were controversial figures in Myanmar for their outspoken, stinging, comedic satire of the Junta -- the totalitarian military government that ruled the country from 1962-2011. This landed Lay and Zaw in a forced labor camp for almost six years after they performed at the home of Aung San Suu Kyi in Yangon in 1996. I caught a solo show by Lu Maw in a rundown open-front garage. The night included somber moments, tongue-in-cheek jokes about Maw's wife, and a surreal photo-shopped image of Barack Obama and Aung San Suu Kyi passionately kissing. Here in this image, Lu Maw brandishes an accusatory sign stating what he believes caused the kidney disease -- and ultimately the death -- of Moustache Brothers member Par Par Lay. He believes that the slow poisoning from lead-contaminated water was intentional, describing the death of his brother Par Par Lay as a "government killing." It's also part of a wider commentary on Myanmar's very poor treatment of its prisoners. I was moved that even after such a trying and difficult journey -- and loss -- Lu Zaw was brave enough to continue to stand up and shed light on the government. 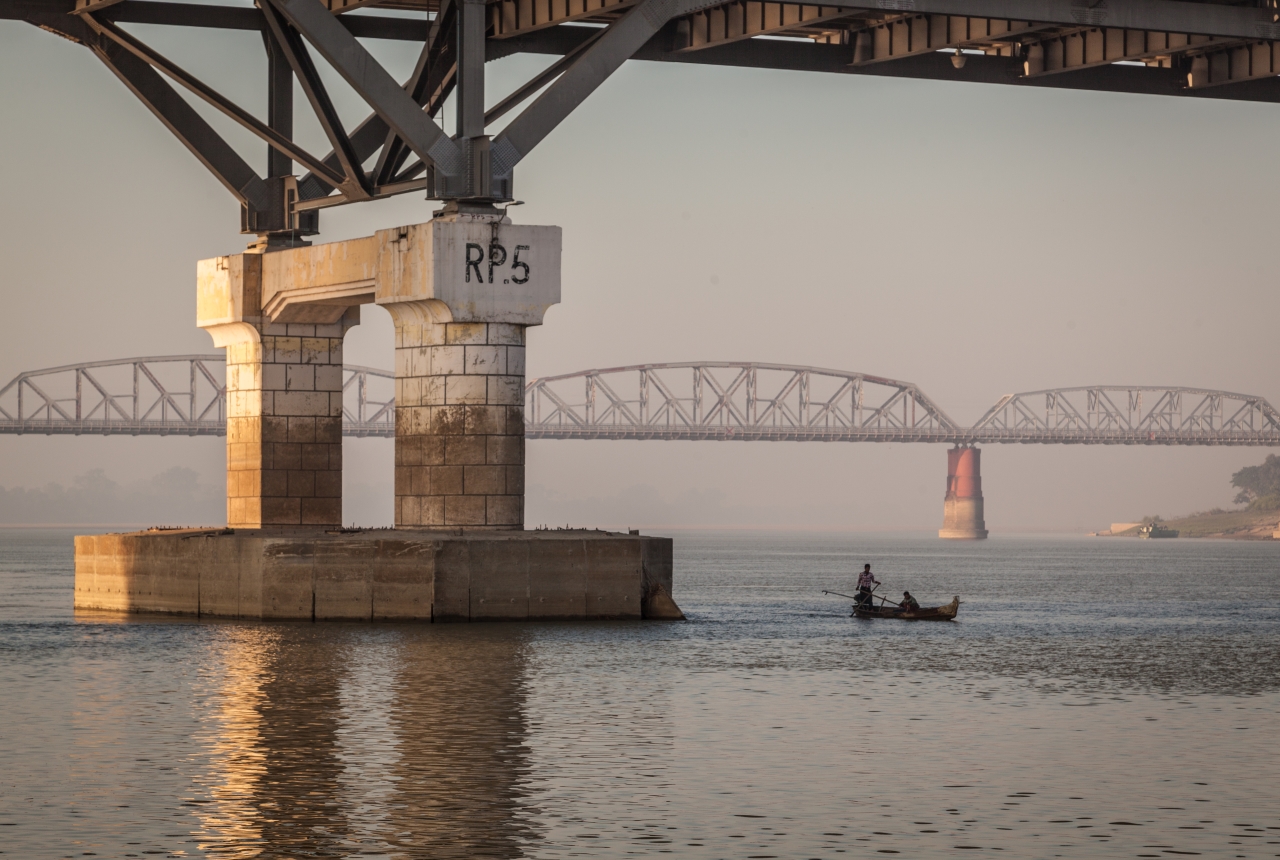 Afloat on the Irrawaddy River

Leaving Mandalay behind, I travelled down the Irrawaddy River by boat to Bagan -- a sedate journey of nine hours. Even at 5am, the river was coming to life with families outside yurt-like tents on the opposite bank and aboard motorized longboats. The Irrawaddy flows north to south, and as well as being the country's most important commercial waterway, it's also home to the eerily humanoid Irrawaddy freshwater dolphin. 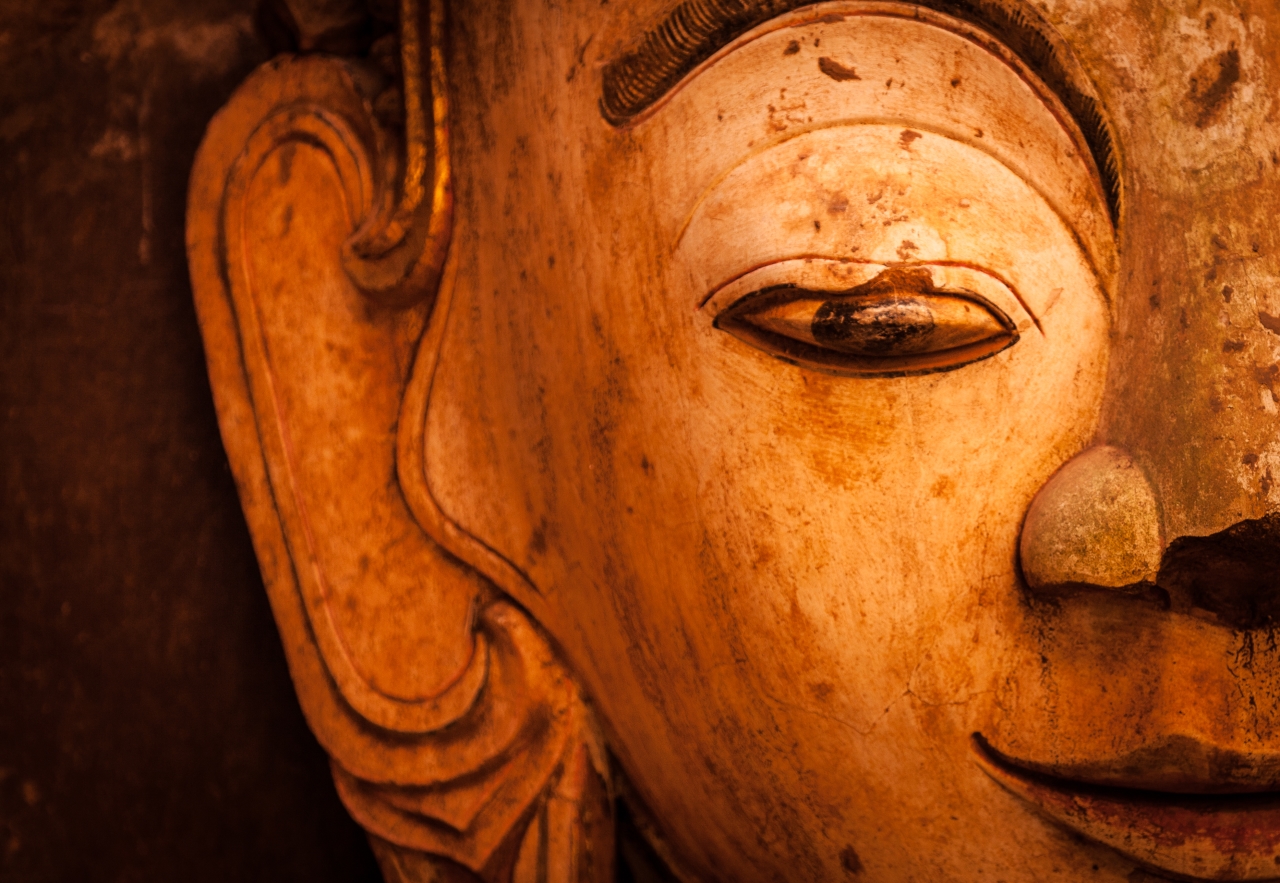 Halfway through the trip and I was beginning to feel as though I was greeting an old friend every time I encountered a serene Buddha in a crumbling stupa. 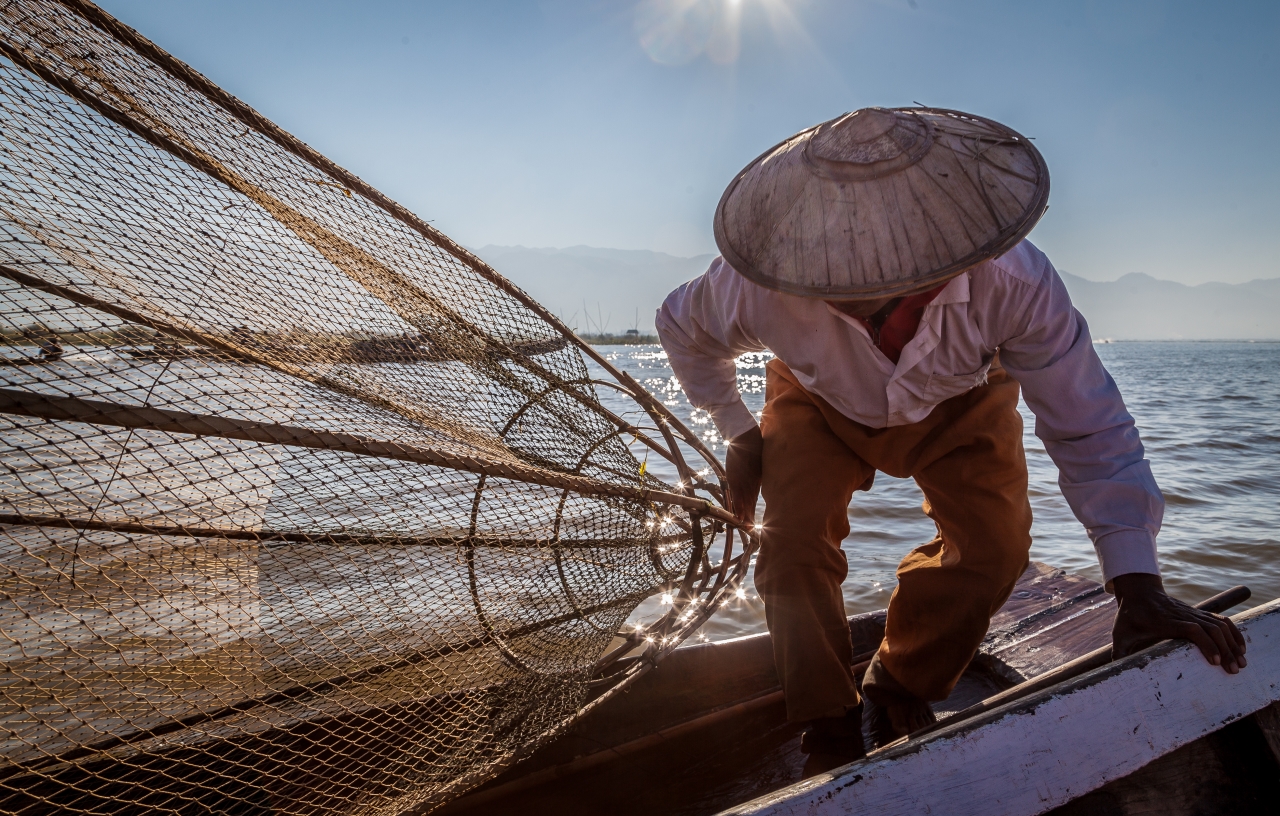 He was an Intha -- a member of a Tibeto-Burman ethnic group living around Inle Lake. They are famed for their leg-rowing technique and for living off produce grown on floating gardens. It was hard to tell if any of the few fishermen on the lake actually fished to sell a catch, or if they made the majority of their income by posing for tourist photos. When he had finished steadying his boat against ours, he beamed a toothy grin my way and said “Money!” Tourism came to Inle Lake many years ago -- long before the rest of the country -- as a showcase location for travellers who ignored the travel boycott of previous years. While I’m never thrilled to pay for a photo, something about the man really struck me. Perhaps his kind demeanor about the matter, or perhaps the labor he must do each day carving across the lake and back, whether for fish or photos. At any rate, pay up I did -- something about the sparkling light on the water, his wide grin, and the calm beauty of bobbing away out on the lake seemed to sooth any concerns away for me. It wouldn’t be the first or last time I felt that in this place. 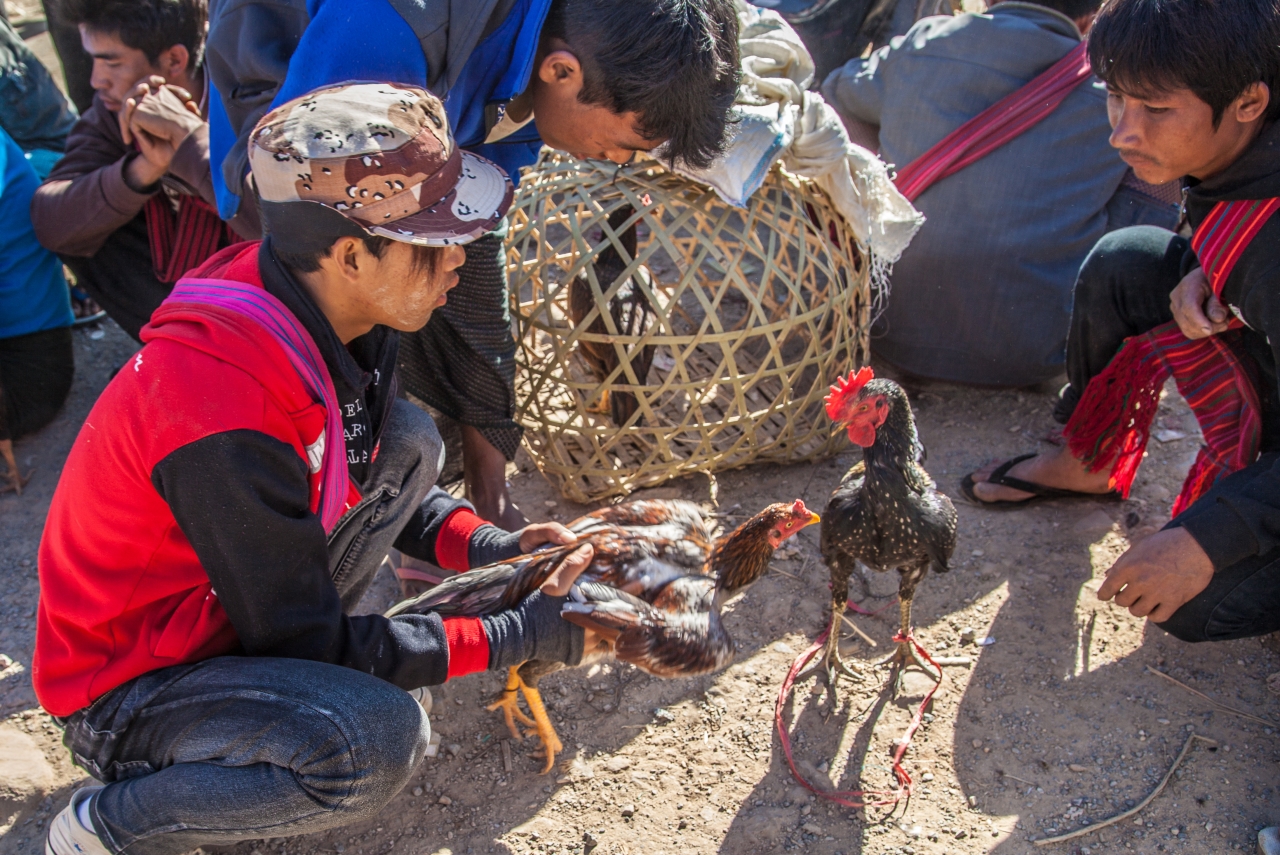 Inle's Five-Day Market travels in rotating fashion around the villages of the 22km-long lake. It was there that I came upon this scene. The man on the left was attempting to sell these birds to the man on the right as a pair of fighting cocks. They were the most placid of creatures. Try as he might to goad them into scrapping, they looked as soothed as I did out on the lake just days before. While I didn’t get to meet these men personally, I was very much amused by the scene and sat watching it unfold. I got the impression that cock fighting must be a serious business in Myanmar, and it turns out this is true. In fact, a 'Burmese Fighting Rooster' is a highly sort-after bird in the Thai cockfighting world. They are known for being smaller and using strategy. Thai-fighting roosters are larger and use brute force. A Thai-Burmese cross is the most prized bird in each country. Like in neighboring Thailand, lots of money is involved on the gambling side, so a man trying to pull the wool over someone's eyes by selling them a dud chicken isn't taken as a joke. 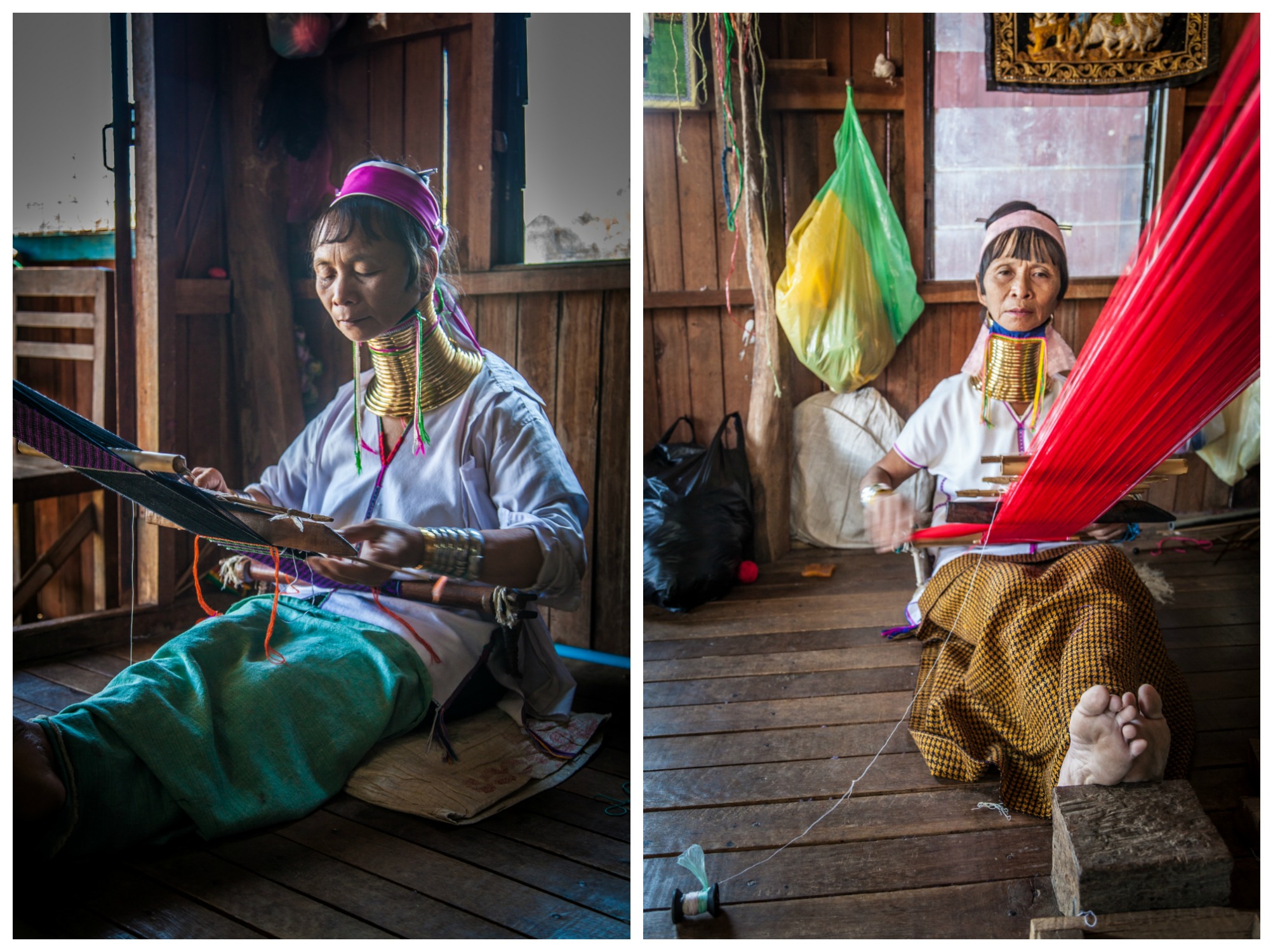 Travel shouldn't be about gawking at minorities because they look different, snapping a photo, then romping off back home to show the family -- but this was the exact setup here at Inle Lake. What I found was two ladies, appearing -- to me -- to be quite glum, weaving away diligently, a donation (photo fee) bucket to their side. "Conveyor-belt tourism" as I call it. These people are originally from Myanmar's Kayah State, which borders northwest Thailand. Violent conflict in the late 80s and early 90s between Karenni separatists and the Burmese army turned many into refugees. Some fled across the border into Thailand; others elsewhere in Myanmar. Many 'tourist villages' in Thailand and Myanmar, where the Kayans now live, exploit them. Much of the tourist money ends up not in the hands of the people. I regretted going to see these women, but at least now I can advise others about their story. 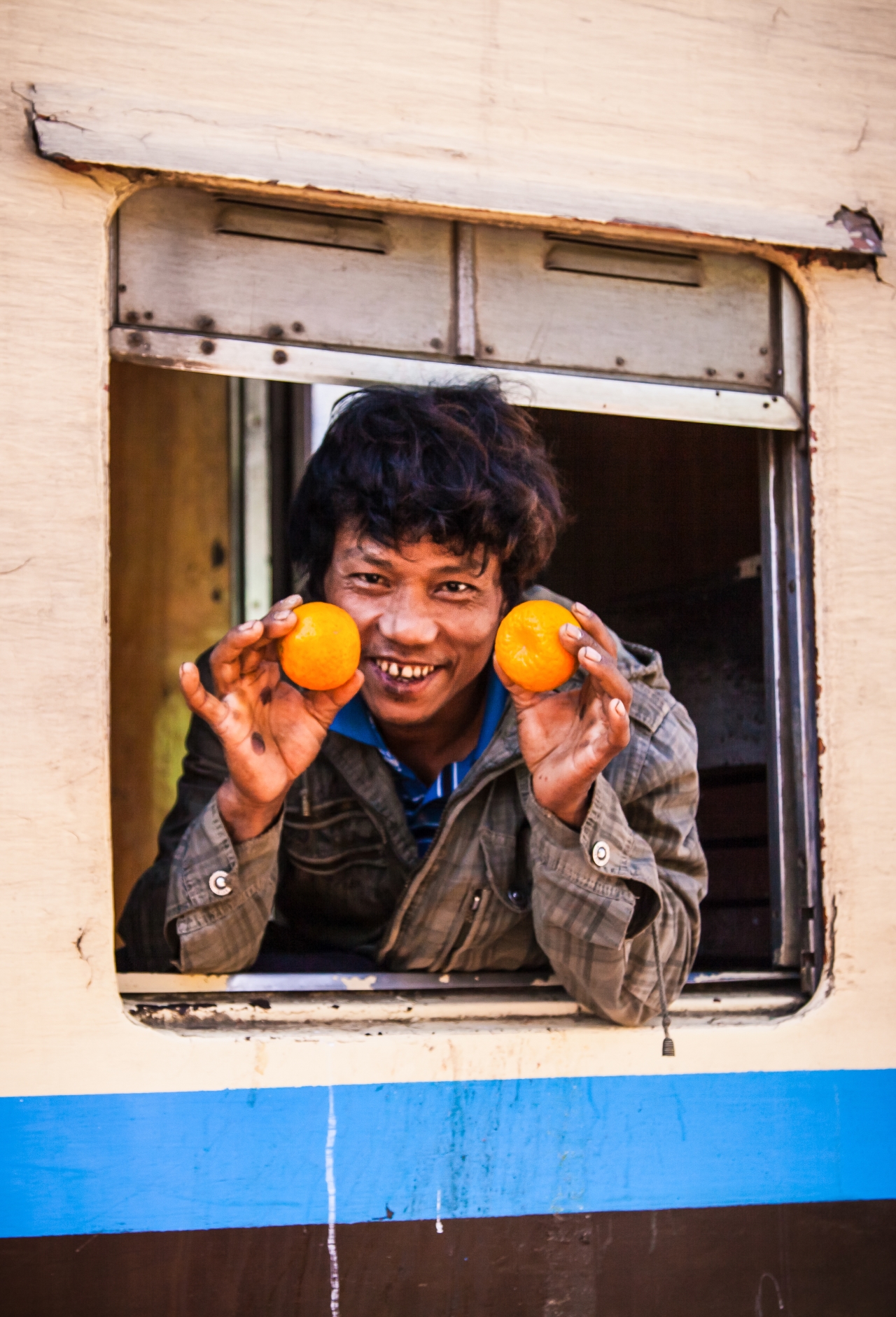 At a stop along the slow line -- known as the slow line because it takes 11 hours to travel just over 90 miles -- from Shwenyaung to Thazi in Myanmar's Shan State, I wandered the platform in search of food. I heard a whistle from behind and spun around to see this man pointing at my camera. After shooting, I ran over and showed his picture to him. “I'm Ben," I said. “Khoo!” came the response with his right hand on his heart. A whistle blew. Before I ran down the platform to my carriage, Khoo tossed me one of his oranges, and laughed when I nearly dropped it. The experience with Khoo confirmed something that I had been noticing throughout my trip. A lot of people in Myanmar actively engage with a traveller when they see them -- making the first move, so to speak. In other Southeast Asia countries I am a little wary of this. But in Myanmar -- though I openly admit my time and experience wasn’t the longest or the most in depth -- for me, there was not a single experience where the local engaging with me had an ulterior motive (though, some things, such as the Kayan women, certainly felt like a tourist scene, but the motives were never hidden). This is bound to change as tourism picks up, but it was an aspect that really hung with me long after I left this place. 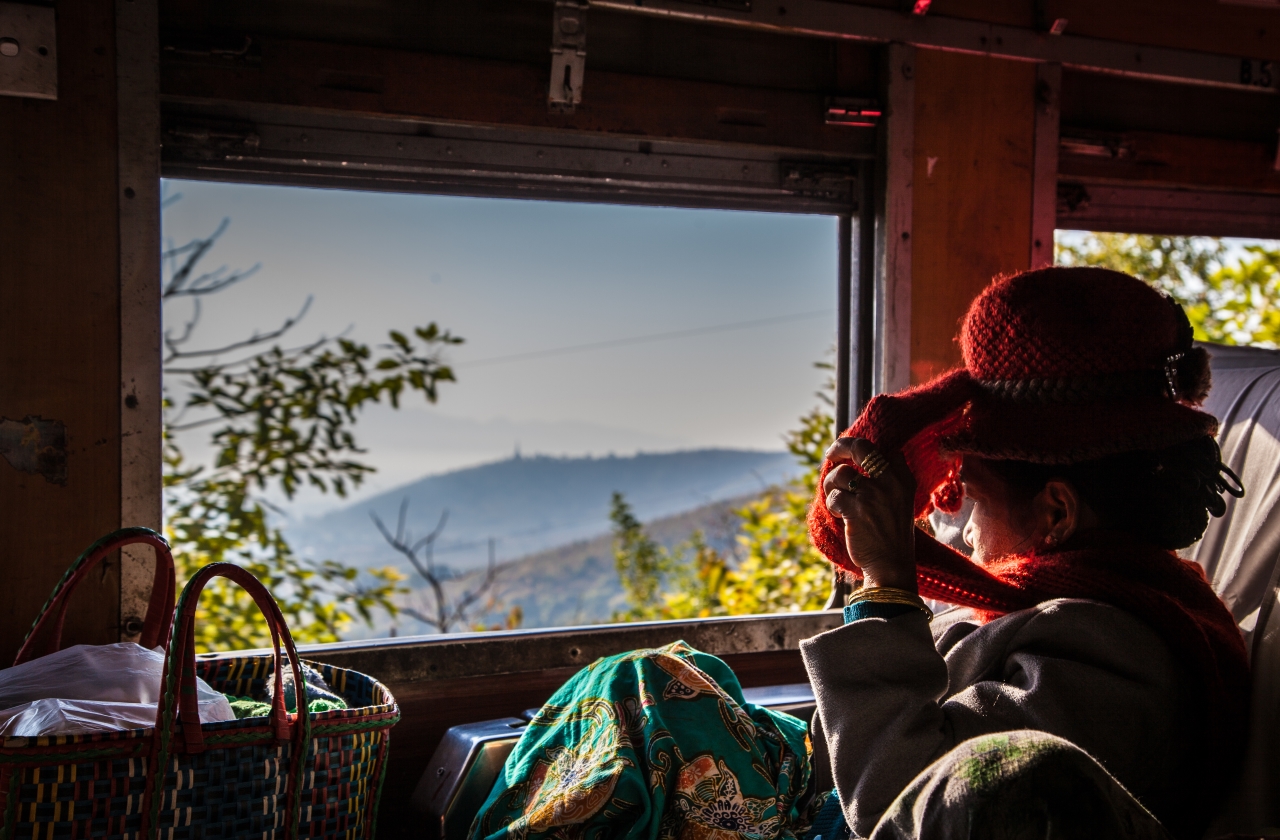 Nyein, 48, was one of a friendly foursome of ladies, wearing beautifully colored clothing. Over the course of many hours (it was the 'slow' train, after all) we shared the view, and they kept me well fed with dried beef, pickled fruit and soft drinks. She was a fan of this image. I only wish I could have asked her what she had been thinking about in that moment. 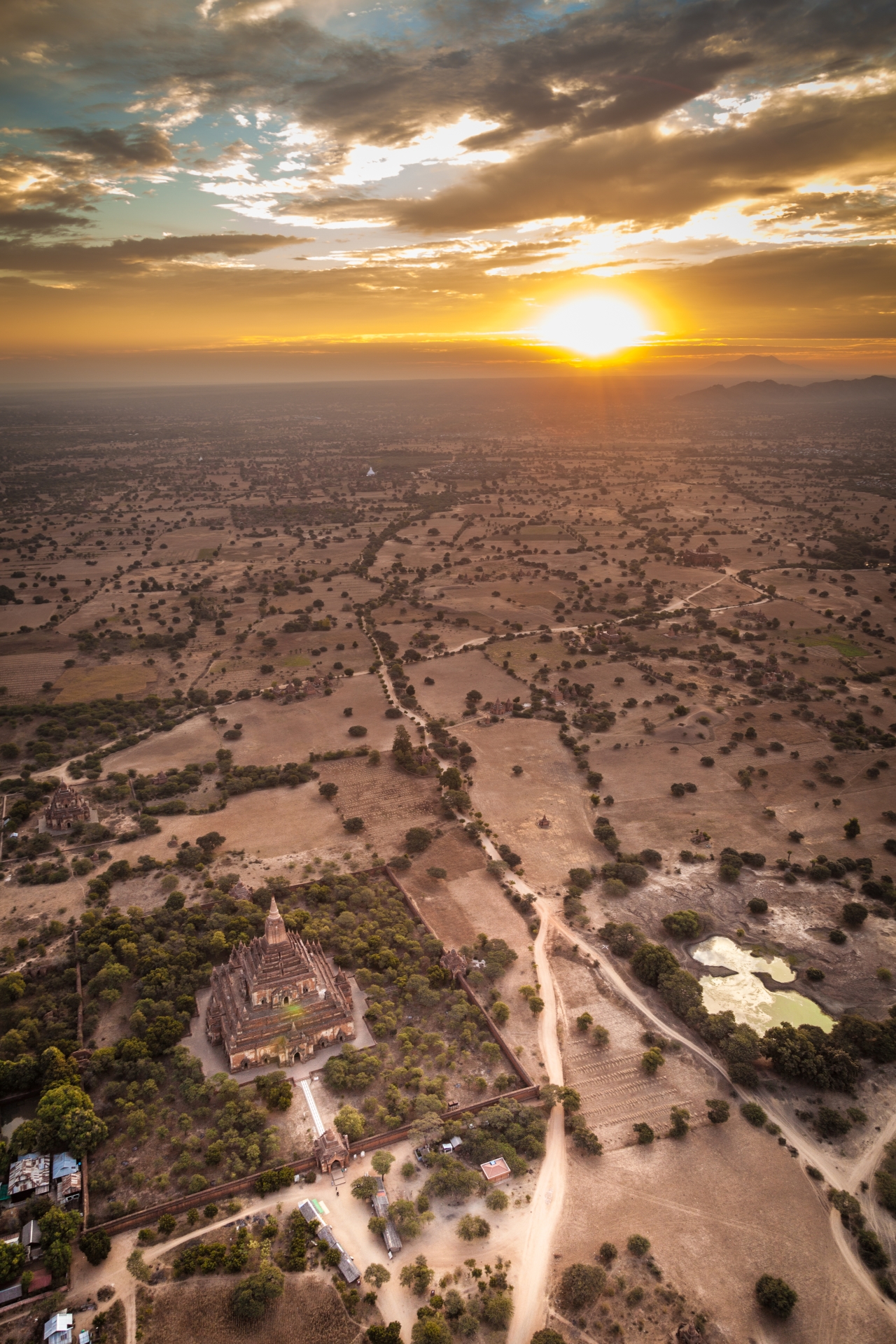 At 6:23am, a great golden hot-air balloon ascended over the plain of Bagan at sunrise, carrying three generations of the Takahashi family from Chiba, Japan, a Colombian woman named Paola, and me. Representing the oldest generation of the Takahashi family was an 83-year-old grandfather, whom I addressed respectfully as Takahashi-san. While I know he's not from Myanmar, Takahashi-san's words have stayed with me. Practicing my rusty Japanese, I asked what he thought of this place. His granddaughter Momoka translated his reply. “I'm 83 and this is my first time traveling outside of Japan. I was convinced Japan was the best country in the world, and believed there was no point in traveling outside of Japan because of that. I feel great joy and sadness. It is beautiful here. I wonder about other countries and people now. I regret how I used to think. Regret is not good for an old man. Not at all.”