I STILL FIND DETAILS in my photographs that in the moment seemed like nothing special, but now flood me with nostalgia. With a great deal of practice, I’ve learned how best to create the potential of finding an image that can do that. Here are seven tips that I applied on a recent trip to Thailand for National Geographic that helped me bring home a captivating story. 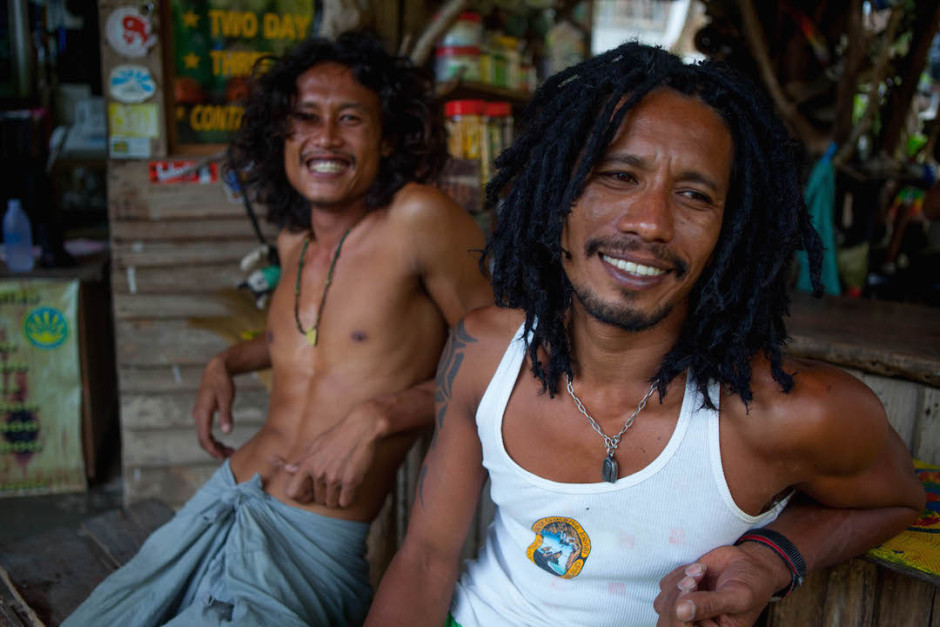 Photo: The best approach is to put the camera away for a while, chat with people, and make friends.

It’s much harder to photograph adults than it is to photograph children. Kids are always excited by attention, but adults can be intimidated by the camera. They can feel violated when you steal their image without permission. Asking for permission might not get you anything more than a portrait though. The best approach is to put the camera away for a while, chat with people, and make friends. When you do bring out your camera, don’t point it at them for a while, take photos of the scene around your subject, but continue interacting with them. Eventually, the camera will be forgotten, and natural moments will unfold.

2. Never pass up an opportunity 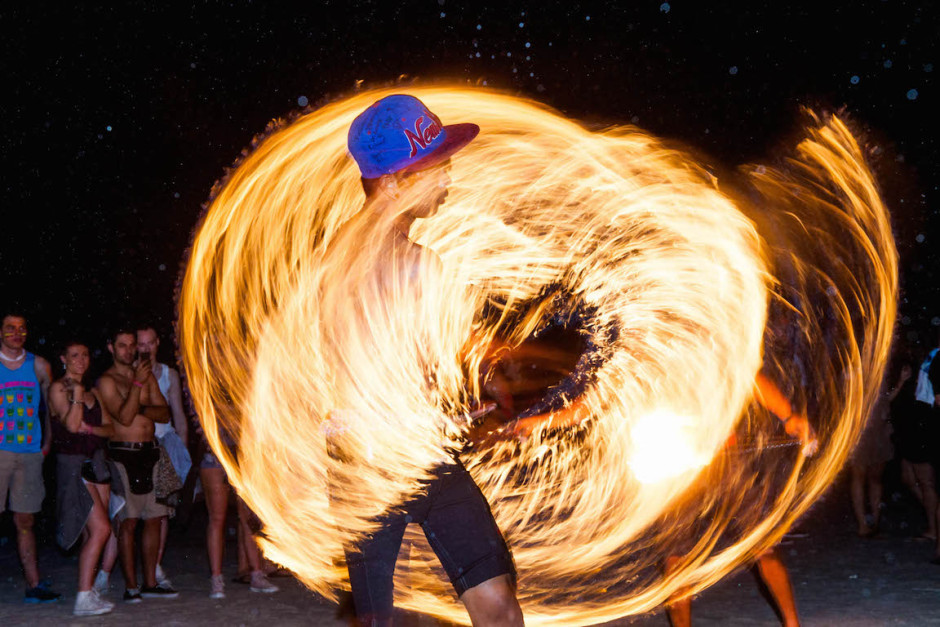 Photo: A fire spinner on the beach in Thailand.

There have been so many times that I’ve passed up an opportunity to take an image because I think I’ll find a better shot later on, or because I think I can come back with more time. Most of those shots are lost forever. When I shot film, it made sense not to waste a frame, but with digital, there is never a reason not to take a few photos. It’s free, and having the choice to share the image is decided after the fact. I rarely shoot tourists, shows, or set up scenarios, but in this instance, I’m glad that I did.

3. Take photos of people at work 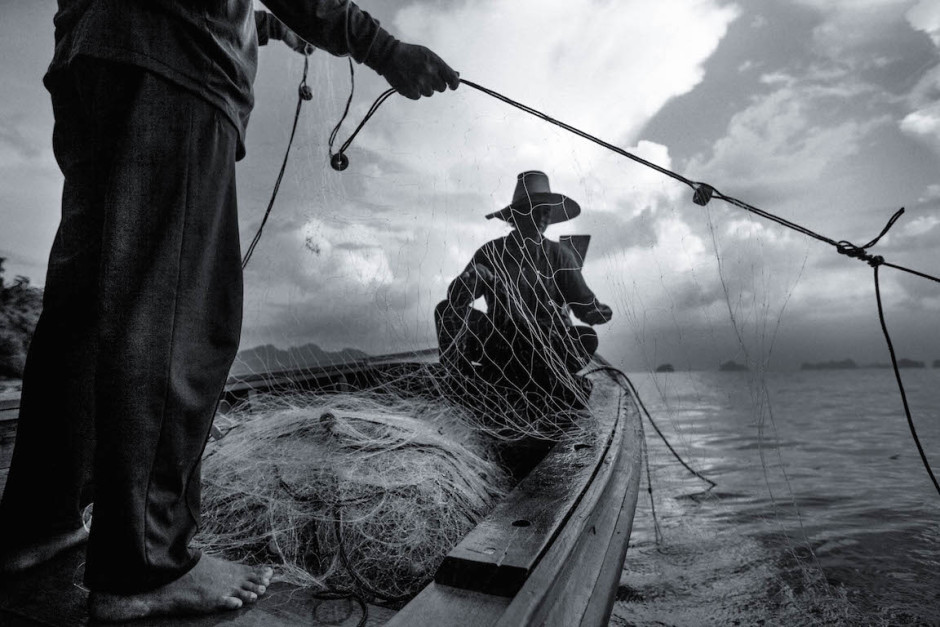 Photo: Fishermen haul in their net in the Andaman Sea.

Shooting people at work has always provided good images for me. They have a body language that is natural, as they can’t pose while worrying about what they’re doing. Workers are usually excited to have someone interested in them, so almost never say no. The images that come from these interactions show the true soul of a place, and will always add interesting layers to your travel photos.

4. Prepare for something unique 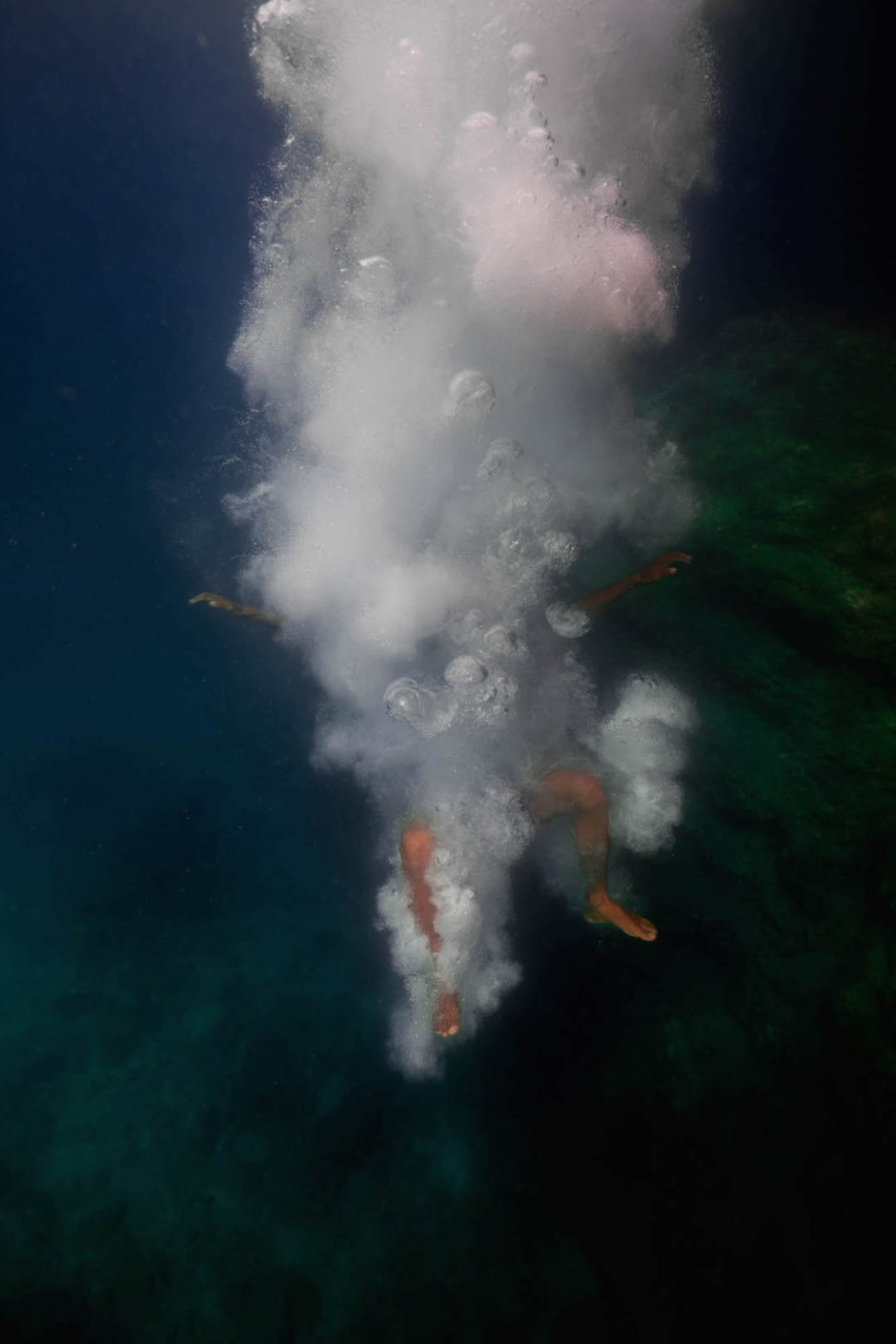 Photo: After a climber who was deep-water soloing finished his climb, he launched himself from the cliff into the water below.

If we all stand in the same place and point our cameras at the same things, we will all have the same photos. When I travel, I try to prepare to get something different. I knew I’d be deep-water soloing while I was there, so instead of taking pictures from the boat like everyone else, I brought an underwater housing so I could take something different. When the climber fell, I ended up with a photo unlike anything I’d ever seen from deep-water soloing.

5. Find the details that matter 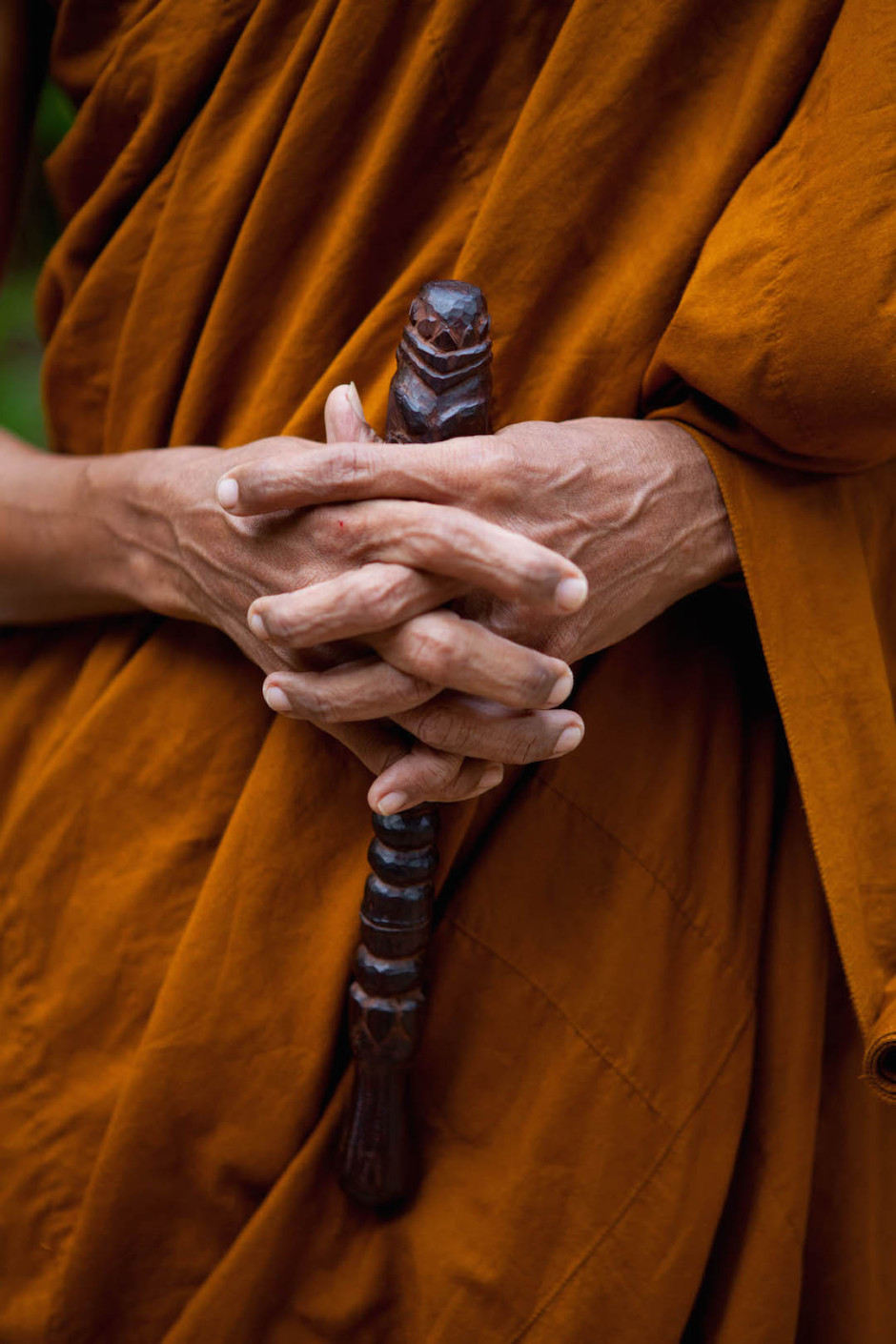 6. Always have your camera ready 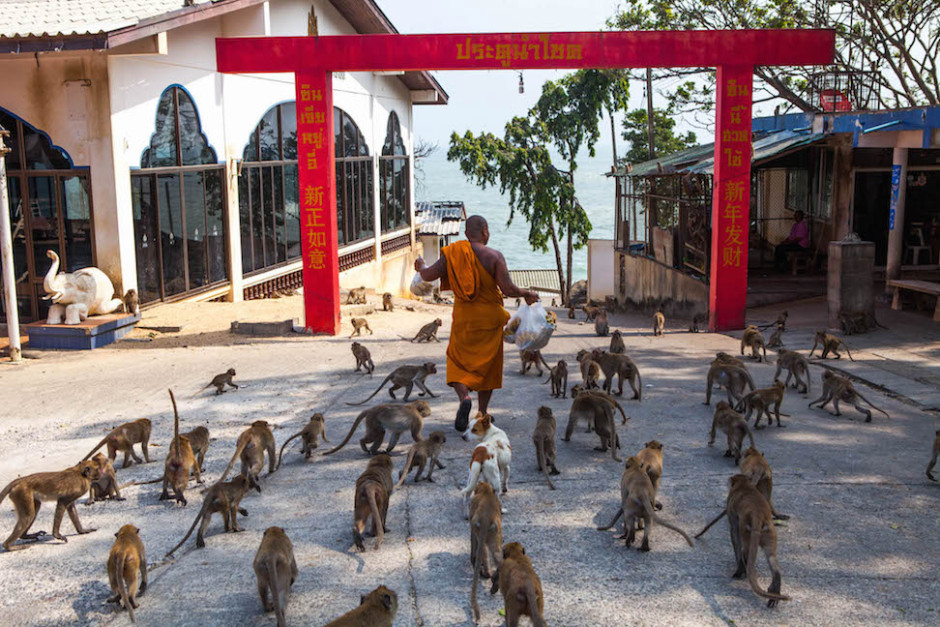 Photo: Monkeys follow a buddhist monk carrying a bag of bananas in a Hua Hin temple.

I was not expecting a great moment when this happened. I was just sitting in our car, waiting for friends when I heard a ruckus coming down the street. My camera was already next to me, ready to go, and all I had to do was jump out of the car and start taking photos. This may be the most important factor, and it does not depend on what camera you are using. Whether it’s a professional DSLR or a smart phone, always be prepared with something for when the moment happens. 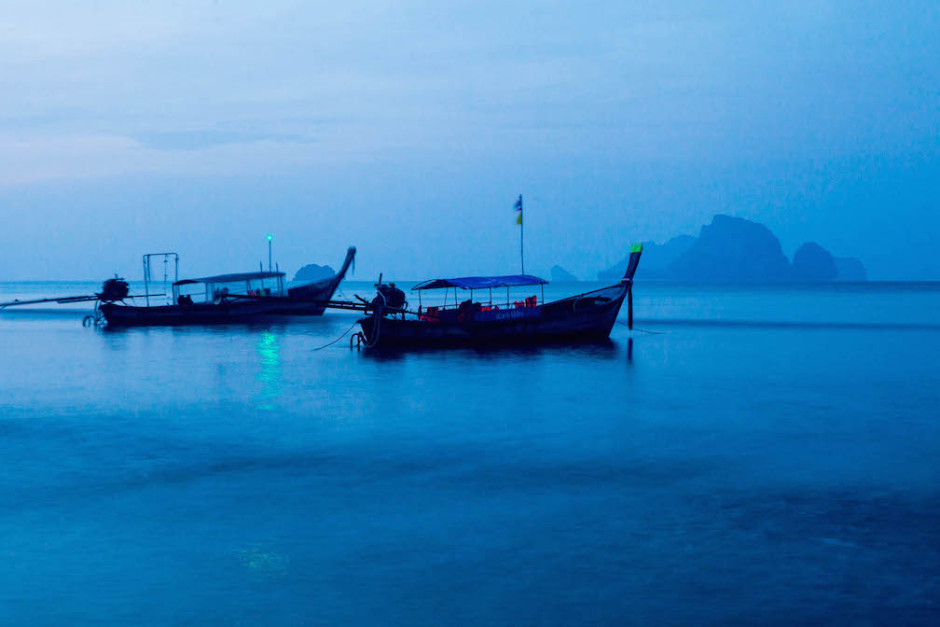 The best time of day is when the sun is barely breaking the horizon, diffused and indirect. Evening light is the same, but the environment is totally different. Morning people understand. While most people are still in bed, and the chaos of commuters has yet to begin, the simplified world is less chaotic.You are far more likely to get an image when you don’t have to hassle with street vendors, dodge mopeds, or push through crowds of tourists.

Tagged
Thailand
What did you think of this story?
Meh
Good
Awesome