BETWEEN OCTOBER 2014 AND SEPTEMBER 2015, I travelled 25,000+ km (15,500+ miles) across both main islands of New Zealand, including the smaller and less-known Stewart Island (NZ’s 3rd biggest island), most of the time road tripping with friends in a camper van or in my own car.

What I saw in New Zealand blew my mind. Not only did I find some pure wilderness I’ve never seen before, but also a true paradise for any outdoors enthusiasts and of course any landscape and travel photographers. Not to mention some of the friendliest people I’ve ever met. Kiwi people are one of a kind!

New Zealand changed me forever. It is there that I started my career as a full-time photographer, it is there that I discovered my passion for the outdoors and mountains, and it is there that I lived for 7 months in the most relaxing place on Earth: Wanaka. Now I have some new plans for 2016 but I know that I’ll be back in New Zealand one day, probably sooner than expected. In the meantime, I’d like to share with you this series of pictures I took during my time there. There are 6 pictures that all represent a unique moment to me, and I hope you’ll find some inspiration in them. 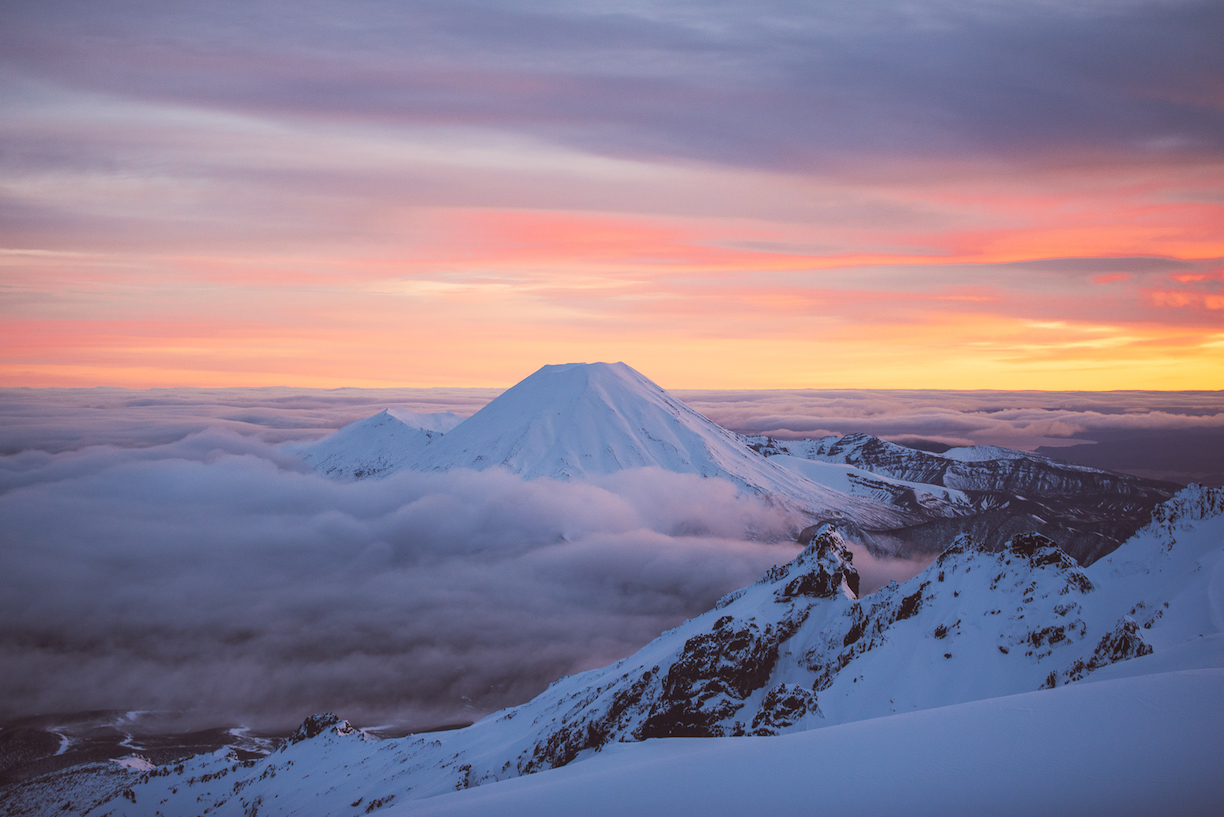 Mount Ngauruhoe is an active volcano on NZ’s North Island and is worldwide known as Mt. Doom in the Lord of the Rings trilogy. I took that photo at sunrise from Mount Ruapehu, the highest peak of North Island and part of Tongariro National Park. I didn’t hike up there at night as we were in the middle of winter and it was bloody cold, so with the help of the groomers and their snow-grooming machine (Mount Ruapehu is a ski field in winter), we went to that point of view to shoot sunrise. I still can’t believe how lucky I was that day. Perfect location, perfect subject and the most epic sunrise of my whole year in NZ. Unbelievable! 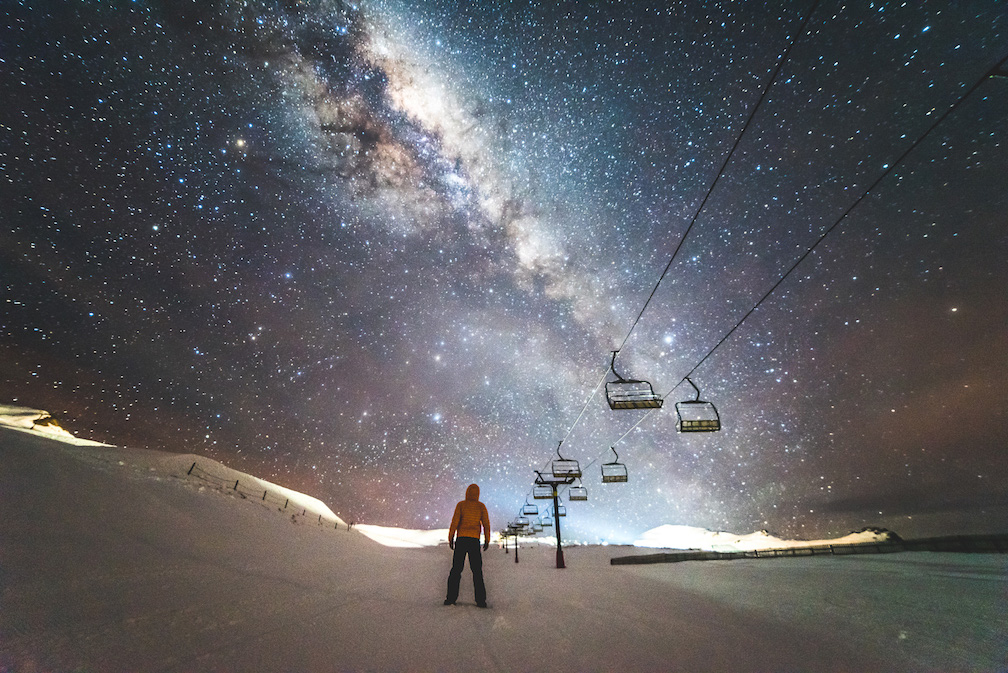 Cardrona is a small village of the Southern Alps in the South Island. Very close to Wanaka where I lived, I decided to spend a night at the ski resort in a chalet in order to shoot sunset and sunrise. What I didn’t expect that day was to actually go on a night photo shooting but the sky was so clear I couldn’t miss my chance. Hell was it cold, but what were the chances I will find myself on a ski field in the middle of the night, with no one around, and a massive playground to shoot the stars? I set up my camera on my tripod and I stood still for 30 seconds in order to do a long exposure to capture all the lights from the sky, and then the magic appeared. 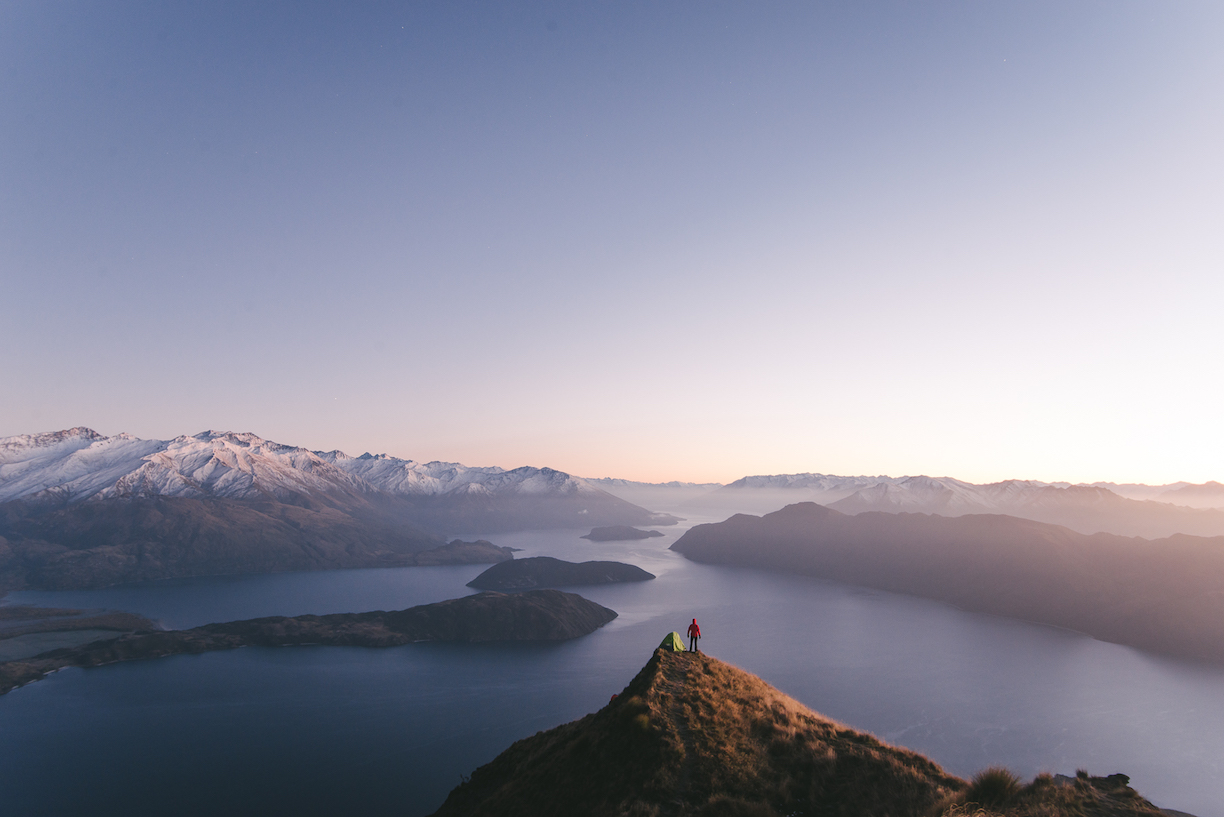 Wanaka is where I lived for 7 months, and it’s probably the most relaxing place on Earth. It also has some epic sceneries with Lake Wanaka and all the surrounding mountains such as Roys Peak. I took that shot in April, in the middle of the southern autumn. The view people can enjoy from the top of Roys Peak is probably the best one of all New Zealand, and I had the chance to climb up there 4 times and camped twice in my year in the country. It was a restless night because of the cold but also because we were shooting non-stop in order to get the perfect shot with different lights and position of the stars in the dark night. 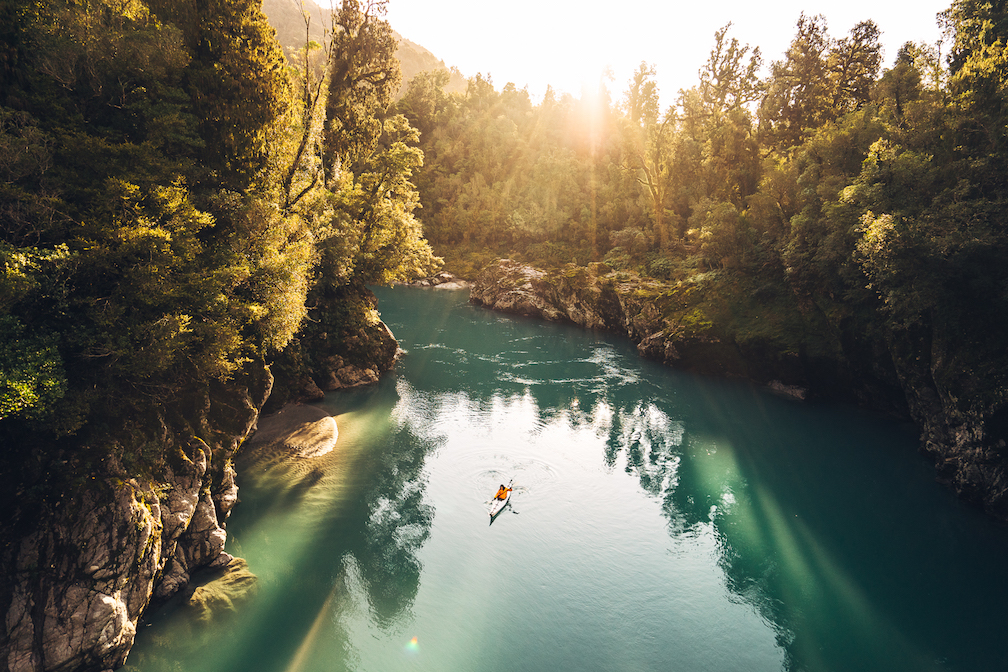 On South Island’s west coast is one of the best-kept secrets of New Zealand: the Hokitika Gorge. The scenery there is unreal. I had already visited that place 8 months before that shoot, but the lighting wasn’t perfect, so I decided to go back and shoot just before sunset during the golden hour. Luckily I had an orukayak with me otherwise, there’s no way to get a kayak in the water, the gorge is too remote. I took the shot from a swing bridge while my friend was struggling paddling against the very strong current. But what a great memory! 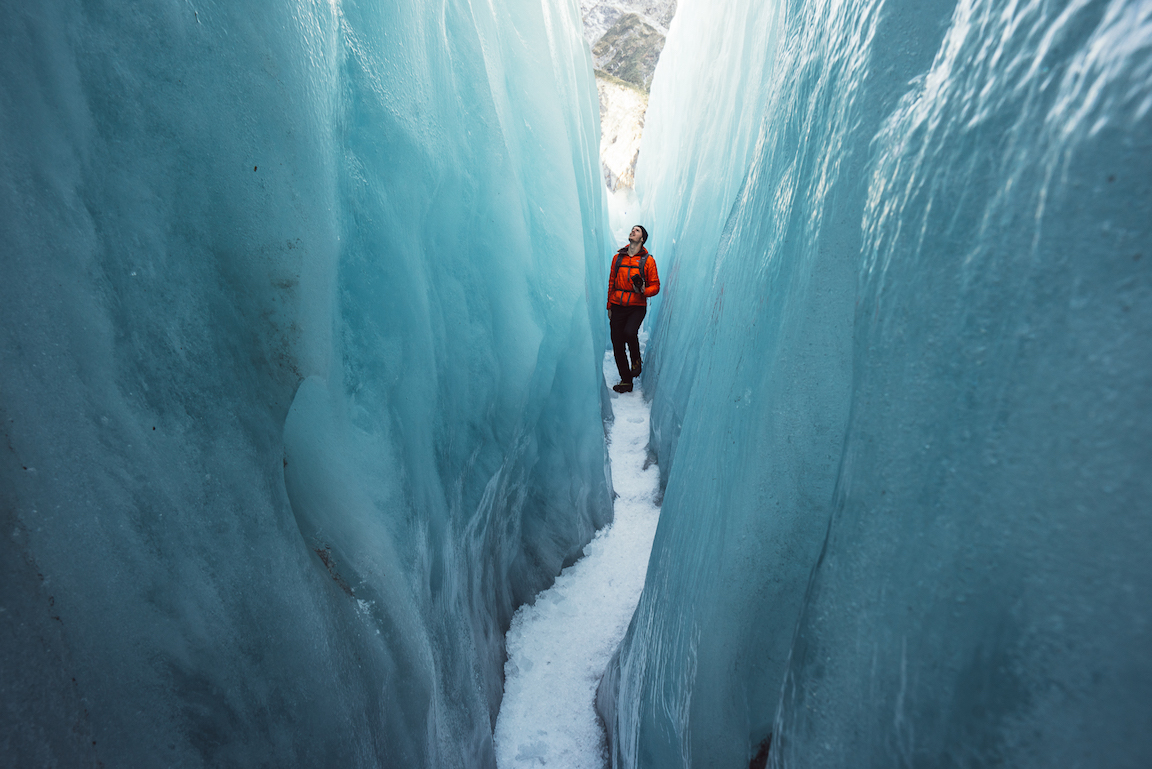 With Fox Glacier, Franz Josef Glacier is NZ’s most known glacier as it is easily accessible for anyone who wants to see it although the glaciers retreated a lot the past years. With a friend, we went on a heli-hike trip, exploring Franz Josef’s caves and massive crevasses. I’ve never seen something like that before. Walking on ice that thick, seeing all those different shades of blue was a very intense experience. Definitely one of my highlights of my year in NZ. 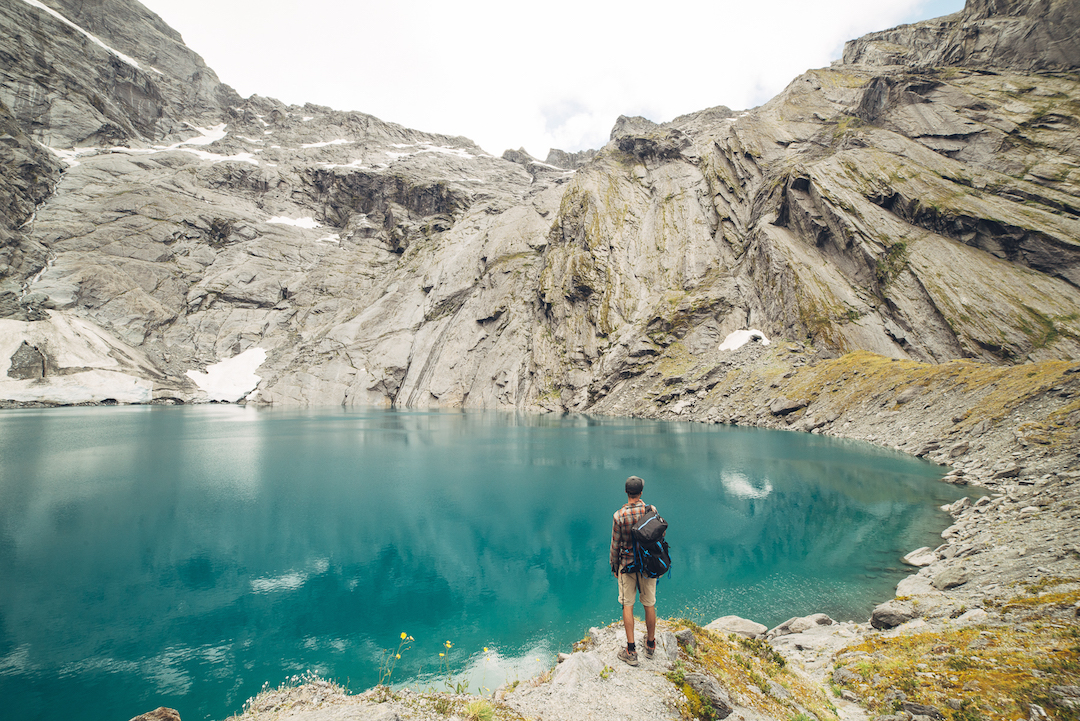 To get to that alpine lake, it is a 3-hour hike from the backcountry hut where we stayed with my friends. It’s in the middle of Mount Aspiring National Park and even in high season there’s barely anyone going to that lake. We were actually alone for the whole afternoon, enjoying the silence of that lost region of New Zealand. A friend of mine had a quick dip in that crystal-clear water. We went there in summer when a couple of months earlier there were still icebergs floating in the lake, just to give you an idea of how cold the water was.