I‘VE USED MY CAMERA to climb collapsing mud banks, and I’ve gently pushed sharks away from me with it, but it’s wrong to think of a camera as some form of protection. Photojournalists and adventure photographers often find themselves being drawn in to more dangerous situations while looking for that “perfect” shot. We’re like the proverbial ostrich with our head in the sand. Thinking we are safe and hidden, while in fact we are fully exposed. There have been a number of times I’ve made near fatal mistakes in the process of taking an image, and sometimes I did nothing wrong — I just was in the wrong place at the wrong time. I pride myself on being a safety-conscious individual, but I’m also not risk averse. Sometimes you have to weigh the probability of disaster against your fear, and make a choice based on that. 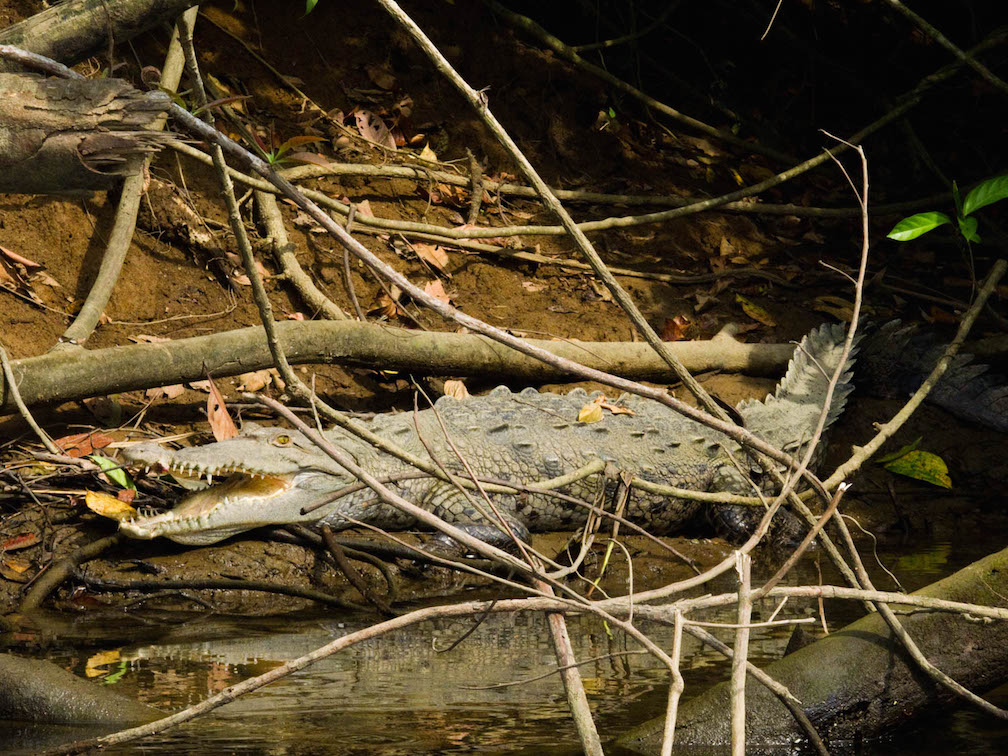 Too close an encounter with a crocodile

I’ve spent a lot of time working in Costa Rica; the oceans, jungles, and beaches are a mecca for photographers and storytellers. I’ve run into jaguar, sharks, poisonous bugs, and venomous snakes, but none of them have ever left me with the unease that a crocodile gives me. It all began when I was climbing down a mud river bank to photograph a crocodile that had caught a horse and dragged it into the river. I stopped on a large boulder about 20 feet above the crocodile, and it submerged itself until it was just hidden from view. I stood there waiting for the croc to resurface, and the ground dropped out from under me. The boulder had cut loose, and I was sliding head first down the riverbank. The croc, an opportunist, rose back up out of the water and opened it’s mouth, ready to receive its appetizer. The only thing that saved me was that tumbling boulder, the size of a coffee table. It actually bounced over me, leaving me with only a scratch, and landed in the water right in front of the croc. It was enough to scare it off, but I wasn’t going to hang out. My new camera became a climbing tool as I used it for purchase in the muddy riverbank, and climbed to safety. 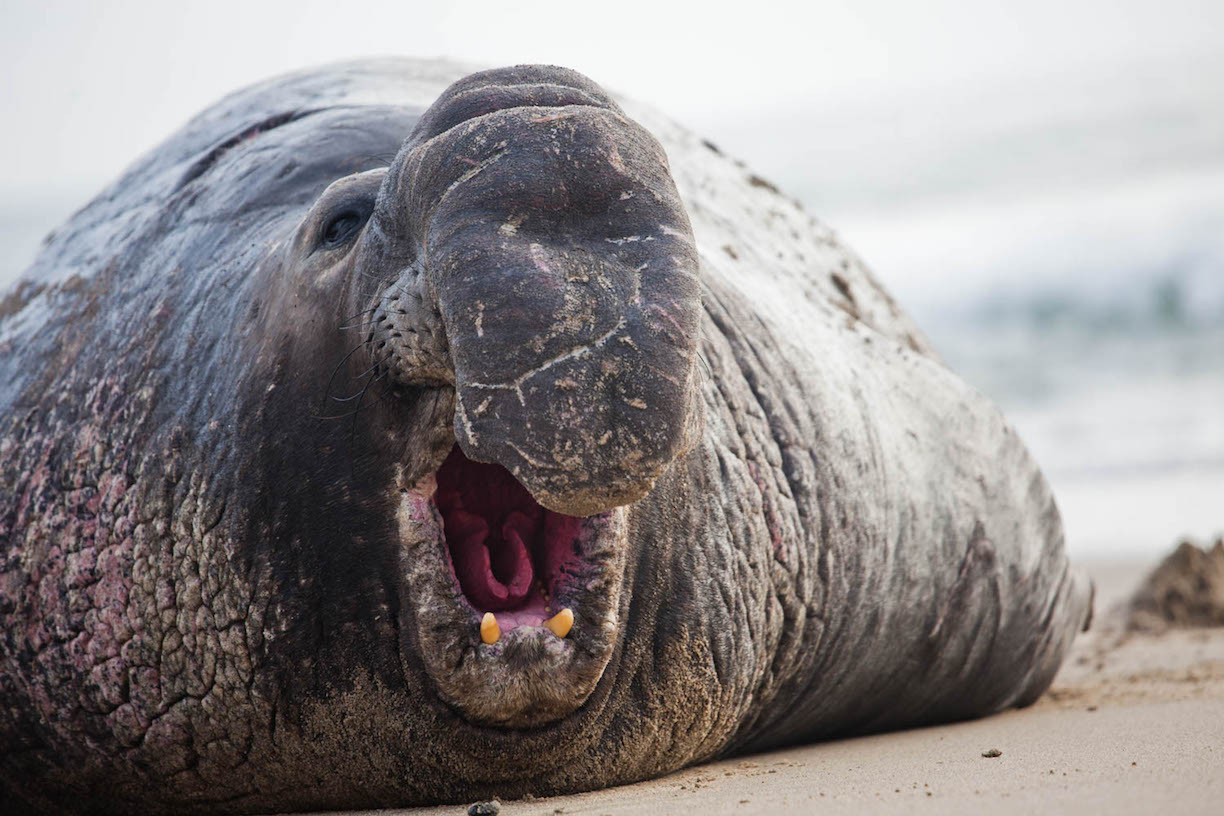 Elephant seals aren’t as slow as they look

Walking along the beach at Año Nuevo, a surf spot north of Santa Cruz, I came across a huge bull elephant seal that had arrived early to stake his territory. They are the size of a Volkswagen, and weigh up to 8,800 pounds. They don’t elicit much fear while they are on land though, as they take the form of a giant slug trying to bellyflop up the beach. I walked right up to the seal, took a few photos, and then backed off a safe distance to see if I got any interesting photos. As I looked at the LCD screen on my camera, I saw an enormous shape in the reflection, rising up behind me. Elephant seals fight by body slamming each other, they raise themselves up 8 feet tall and bring their full body weight down on their foe. I only had time to roll to the side as the beast crashed down where I was only a moment before. I crawled backwards on my hands, kicking with my feet as he continued to charge. I admit it, I screamed at the top of my lungs as he repeatedly brought his weight down into the sand only inches from my feet. This slow “slug-like” animal could move and he was gaining on me. At last, he stopped, and I swear he was smirking at me as I rolled back over and sprinted away. 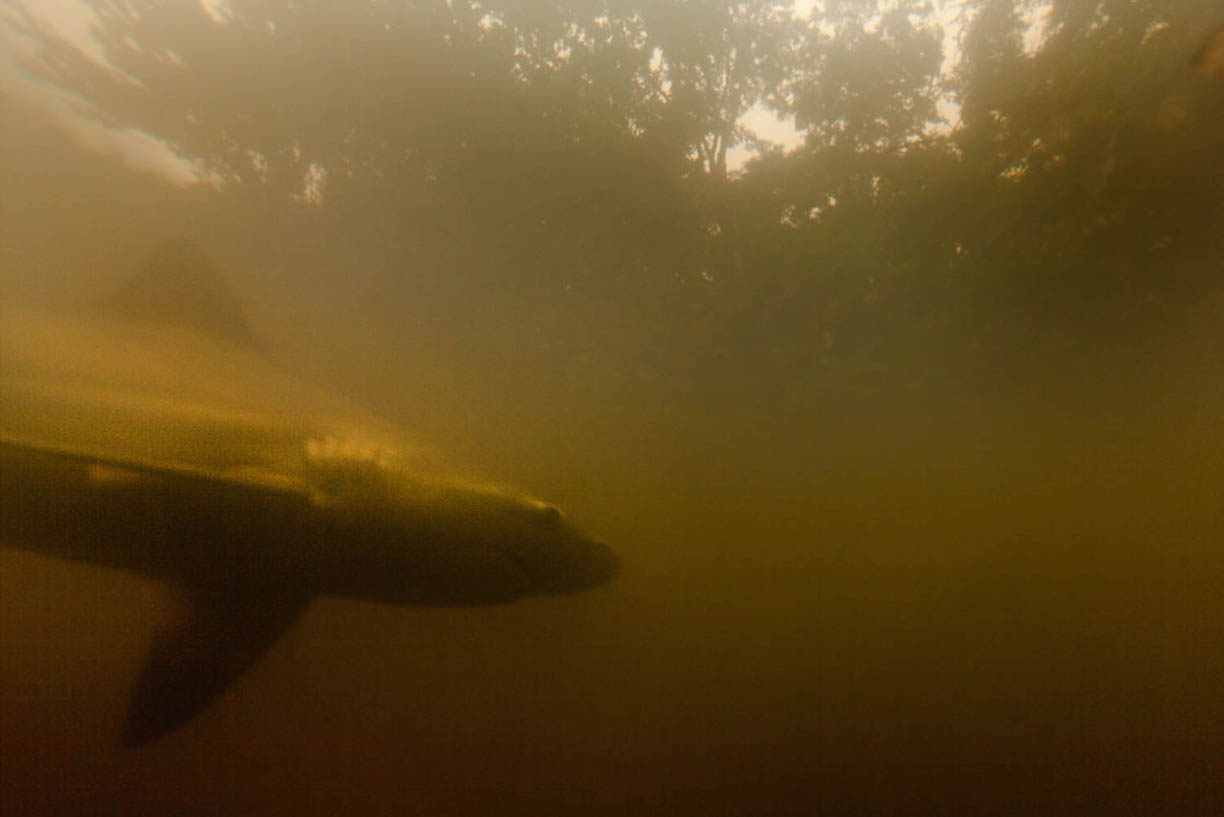 I was in Corcovado National Park shooting a story for National Geographic on bull sharks swimming up into fresh water rivers. I’m very comfortable with sharks, but this murky water was also home to crocodiles. I’d already had my first run in with a croc years before, so I had two people watching the river around me for any sign of them. At one point, all of the sharks disappeared, and I pulled my head up out of the water to ask if anyone saw where they went. Just then, my camera moved in my hands. A huge crocodile had snatched it, grabbing between my hands on the underwater housing. My first reaction was to try and take a photo of the inside of it’s mouth, at which I failed because one of my guides had already grabbed me and started to drag me back into the boat. After that I made a boom pole, and mounted the camera in a way that allowed me to shoot from the boat! 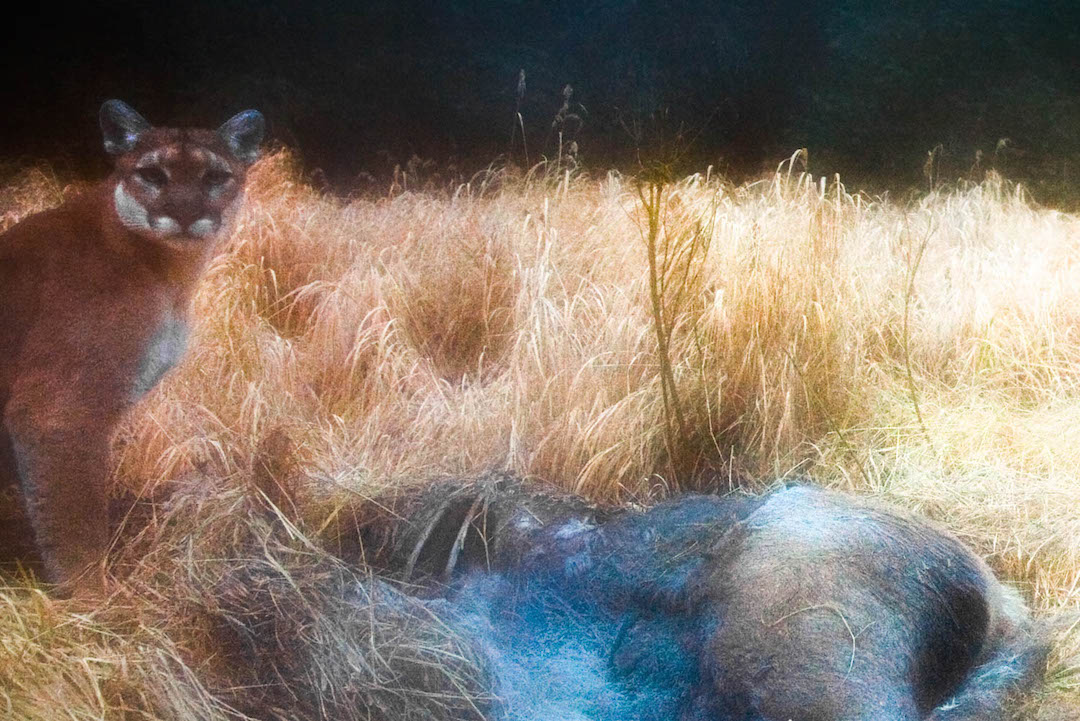 Around my house in Colorado, there are mountain lion sightings regularly. They are elusive creatures, only being seen when they choose to let you see them, but they have little to fear from people in this area. My brother Jesse had found a lion kill about 6 miles up a trail near our house, and I had just purchased a camera trap that would take photos of anything that walked past it. We hiked up to the kill, and rigged the camera up next to the kill, planning to return in a week, hopefully catching a shot of the lion. We casually set it all up, and began our walk back in the dark. Not long after we turned back, our headlamps started to pick up two pairs of eyes off in the woods, following us down the trail. The lions did not like that we had messed with their kill. For the entire six-mile hike, those eyes stayed with us. Sometimes, we would see them ahead of us, just off the trail, and other times, we’d turn around and see them behind us. It was incredibly spooky, and had the lions actually wanted us, we would have been theirs. 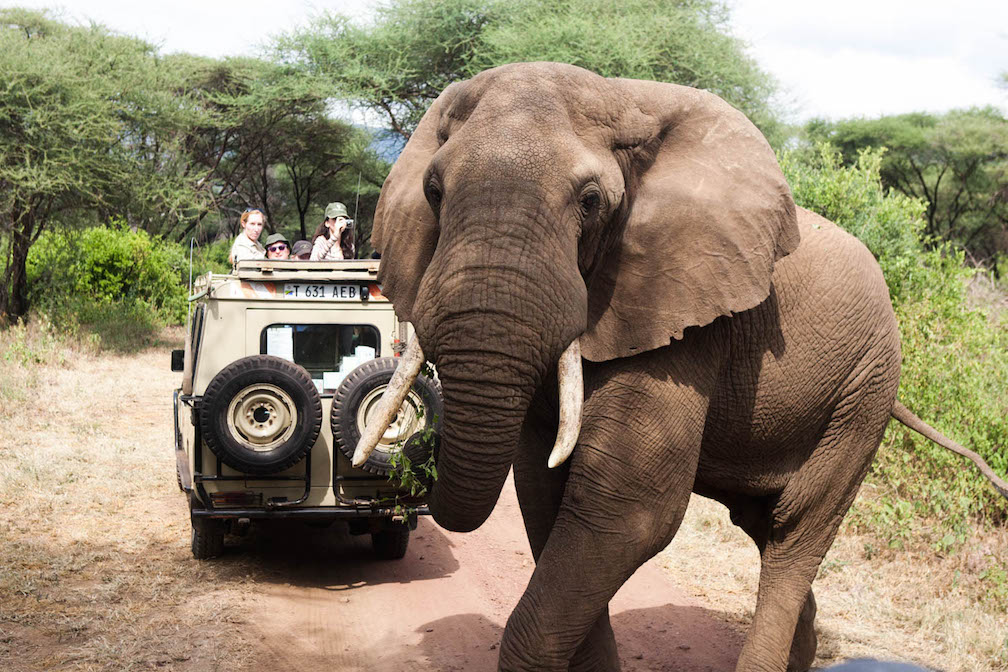 Toe to toe with an elephant

I was in Africa a number of years ago, guiding a safari for a group of clients with the TED Conference. We’d come to a place where we could see elephants off in the distance so I climbed up on top of the hood of the land rover for a better view and began to take pictures. It seemed like the elephant came out of nowhere. It had been right next to us and we’d never noticed that it was there. It walked out of the bushes, and straight up to me. Elephants can be incredibly dangerous, and are easily provoked. Its body language was not aggressive, but I didn’t dare move a muscle. Everybody was telling me to get back in the car, but I thought it better to hold my ground. The elephant stopped at the hood of the car, looked me up and down, and then wandered back off into the brush. After it left, I began to breathe again. 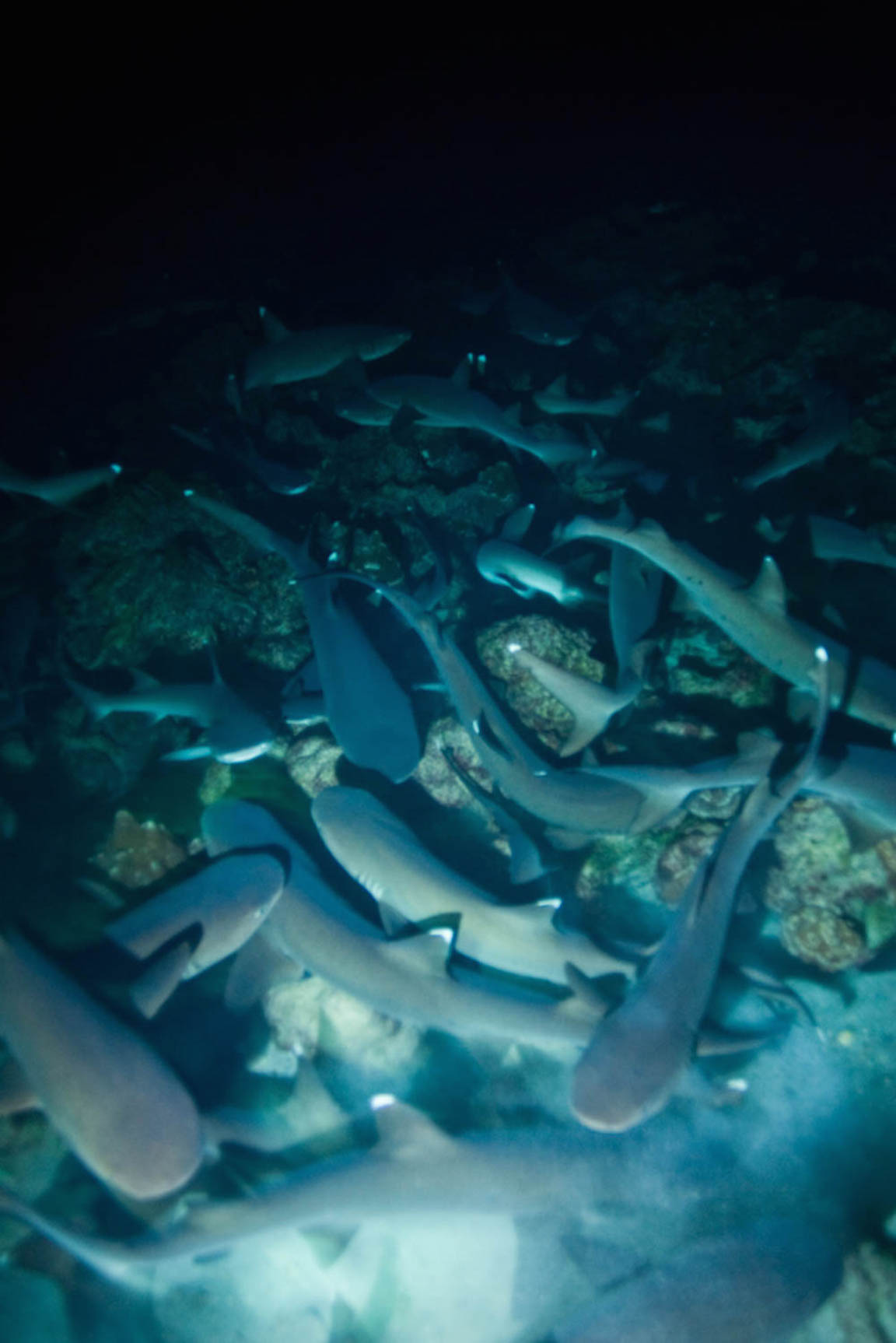 Caught in a shark's feeding frenzy

White tip reef sharks are like the puppy dogs of sharks. They only get about 5 feet long, and they don’t have that “sharky” look. They spend most days laying in the sand under a rock somewhere. At night though, that all changes. It’s feeding time for them, and they swarm the reef looking for prey. I was on Cocos Island, shooting a story on sharks, so I went out to photograph the nightly frenzy of about 300 sharks that happened in a nearby bay. The sharks are constantly looking down into the crevices of the reef, so as long as you stay a good distance above them you are safe. A few people had gone with me, but they’d returned to the boat. I stayed to try and get a better shot than anything I’d gotten so far. I followed the sharks down along the base of a reef, and stopped to check my photos. Just then, a second group of sharks came from above the reef, and I was sandwiched between the two schools. One of them latched onto my foot and began to vigorously shake its body. The other sharks, all tuned in to the fact that this one had found something turned on me as well. I kicked that poor misguided shark in the face as hard as I could until it would let go, pushed a few others away with my camera, and returned to the surface as quick as I could. The shark had mistaken my foot in the dive fin for a ray, one of the species that white tips prey on. Had it known I was not a ray it would most likely have left me alone. This was entirely my fault, and hasn’t changed my opinion of sharks in any way. 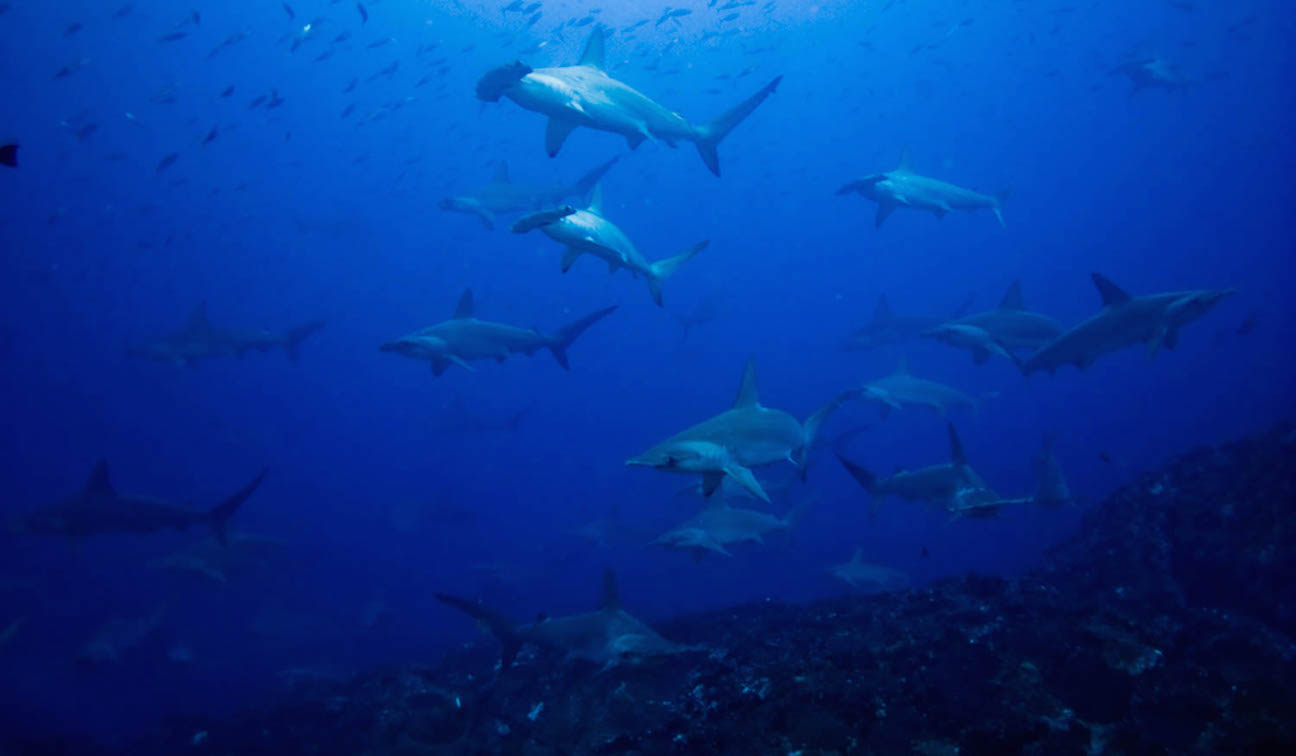 Sometimes it's the smallest things that are dangerous

When i was doing my work on Cocos Island photographing sharks, I’d swim out a mile or so every day to find the big schools of hammerheads. It was a lot of work, and it could be very intimidating swimming in open water with no view of what’s around you. Sharks are not the terrifying aggressive animals that we have reputed them to be though, so I got fairly used to it. The thing that actually nearly killed me was much less intimidating. I’d gotten blisters on my feet from all the swimming in dive fins, and while walking back across the beach to camp, a tiny ant bit me right on one of those blisters. Within a day, my foot had swollen up the size of a football, and the infection was moving up my leg. It took me a full week to catch a two-day boat ride back to the mainland, and by the time I got there the infection had gone systemic. I was violently ill, and went to one of the worst hospitals in the country to see if they could help. They offered to take my leg off for me, suggesting that it was the “only way” to keep the infection from spreading more, and that still it could kill me. I insisted that they just clean it up, and I’d catch a flight back to the US the next day. The doctor began to operate, and sliced my foot open to take out the gangrene that had developed. This is also when I learned that this hospital had no anesthesia to help with the pain. When I got back to the US, I went straight to the doctor and got on antibiotics. The doctors said that the Costa Rican doctor had done a good job, it looked like it was how we would have done it in World War II, but it was a good job none the less.