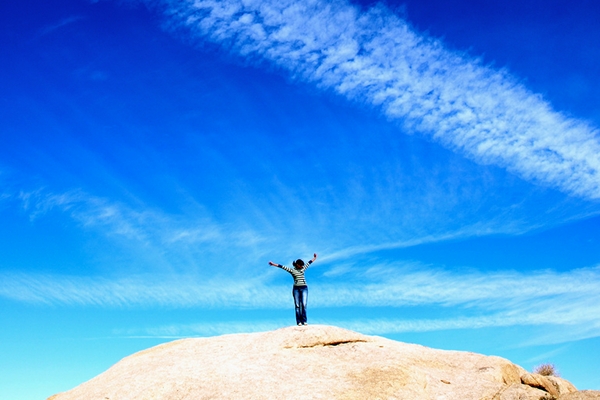 Solitude in the park. Photo and feature by gtall1

Joshua Tree National Park is celebrating its 75th year in 2011, and the kickoff party on January 29 promises two of my favorite things: live music and cake.

I HAVE MADE IT A goal to visit all of America’s national parks. I was recently in southern California, and I was gutted to not have time to visit Joshua Tree National Park. It has so many outdoor activities available and a landscape that can’t be found anywhere else.

The name comes from the iconic Joshua tree forests that abound on the 780,000+ acres of the park. The trees get their name, as legend has it, from “Mormon pioneers who named the tree after the biblical figure, Joshua, seeing the limbs of the tree as outstretched in supplication, guiding the travelers westward” (“Joshua Trees”).

Mountains run along the southwest edge, but the park is mostly desert: the higher Mojave and lower Colorado. The park is popular with rock climbers and scramblers because of its large boulders and rock formations, and there’s also camping facilities (backcountry camping is allowed with registration) and trails for hiking, biking, and horseback riding.

Abbie Mood, one of Matador’s interns, had this to say about the park: 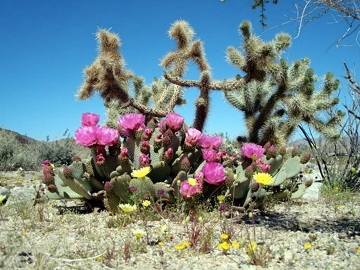 Joshua Tree is a beautiful place where you can go back in the boulders or hike on a lesser-known trail and see nothing but desert, hills, rocks, and Joshua trees for miles and miles.

It has a serenity like not many other places that I have been.

I think all National Parks have something special and with J-Tree it’s solitude. That, and the fact that there is no other place on Earth where you can find so many Joshua Trees in one place.

Morgan deBoer, a Matador intern who’s done some backcountry camping in the park, said this:

I love Joshua Tree National Park because I love Joshua Trees. They are as beautiful as they are strange. I could (and have) spend days at the park hiking through the desert down into oases and nights admiring the stars.

Joshua Tree is HUGE so it’s possible to be totally by yourself if you want, even hiking down in the Grand Canyon I saw a lot of people. There are mountains for climbing, but there are also miles and miles and miles of desert; it’s nice to know that it won’t ever be developed. My favorite part was driving north to south through the park and there is some change (elevation, water, I’m not sure) but Joshua Trees show up slowly and then all of the sudden they’re everywhere. They’re so creepy. They really look like people.

What Seth Shteir from the National Parks Conservation Association Thinks

I had a chance to speak with Seth, California Desert Field Representative for the National Parks Conservation Association about the park to find out his insights.

Kristin: What would you recommend to visitors who’ve never been to the park before?

Seth: I’d recommend exploring the park by taking a hike! Joshua Tree has many great trails- each with its own unique characteristics. Another thing I’d recommend for visitors is to camp in the park. It’s a great way to celebrate Joshua Tree’s 75th Anniversary because it honors the contributions of visionaries like Minerva Hoyt who saw magic and beauty in the desert landscape and spent a great deal of time exploring. Hoyt was a desert plant enthusiast who worked to gain national monument status for Joshua Tree.

Kristin: Do you have a favorite spot in the park?

Seth: I’ve hiked, camped and backpacked all over the park and have many favorite spots. But one that stands out is Porcupine Wash in the southern half of the park. It’s a broad sandy wash with lots of reptiles and bounded by piles of jumbled rocks. Last time I camped there a roadrunner ran up the wash ahead of me and I heard coyotes howling at the moon! 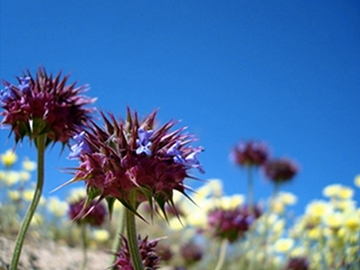 Flower in the park. Photo by Abbie Mood.

Kristin: Are there any little known activities/new activities (star gazing programs, living history, etc.) that people should know about?

Seth:Joshua Tree National Park is not only rich in birds, plants and reptiles, but its equally rich in history. I’d recommend people taking a National Park Service tour of Key’s Ranch.

Bill Keys was a Mojave Desert maverick. He homesteaded and mined in the early part of the twentieth century. When you take the tour you’ll gain an appreciation for the ingenuity and resourcefulness of homesteaders like Keys!

Kristin: What would you recommend as the best time to visit the park?

Seth: Fall, winter and spring are the best times, in my opinion, to visit Joshua Tree National Park. We may not have the spectacle of changing leaves in the desert, but each season has its own unique characteristics.

As the weather turns cool in the fall, its a great time to hit the hiking trail or watch for migrating birds. Winter can be cool, with occasional fierce weather, but come prepared and you can take a great hike and share the trail with just a few people. Spring is the best time to view wildflowers and its also a great time to get a glimpse of a desert tortoise!

The park team will be hosting events throughout the year, like photo contests and treasure hunts. Find out more specifics at the 75th Anniversary Park Events page.

The first event is January 29. From the Kickoff Press Release:

Joshua Tree National Park is planning a public event for January 29, 2011 to commemorate the 75th anniversary of the park. This event will commence a year-long series of events and activities to mark the occasion of the park’s 75th birthday.

The opening event of the anniversary celebration will be held at the Bell Center on the campus of Copper Mountain College in the community of Joshua Tree. The park wishes to extend an invitation to the general public to attend the event and the planned activities for that day. California public television personality Huell Howser will be the Master of Ceremonies for the event.

A musical prelude will begin at 1:30 p.m. with the formal event program to start promptly at 2:00 p.m. A birthday cake for the park and refreshments will be served following the ceremony.

Members of the public wishing to attend the festivities on January 29 are asked to R.S.V.P. to the park by calling 75th Anniversary Coordinator George Land at 760-367-5507. Please reply by January 24. Seating is limited.

Have you ever been to the park? Are you planning on heading to the kickoff party? Let us know in the comments!

Joshua Tree is considered by Matador to be one of California’s Most Spectacular Deserts. Learn more about the park with the National Park Field Guide App.

What did you think of this article?
Meh
Good
Awesome
Bookmark
Posted In
Parks + Wilderness

National parks will be free on these five days in 2020