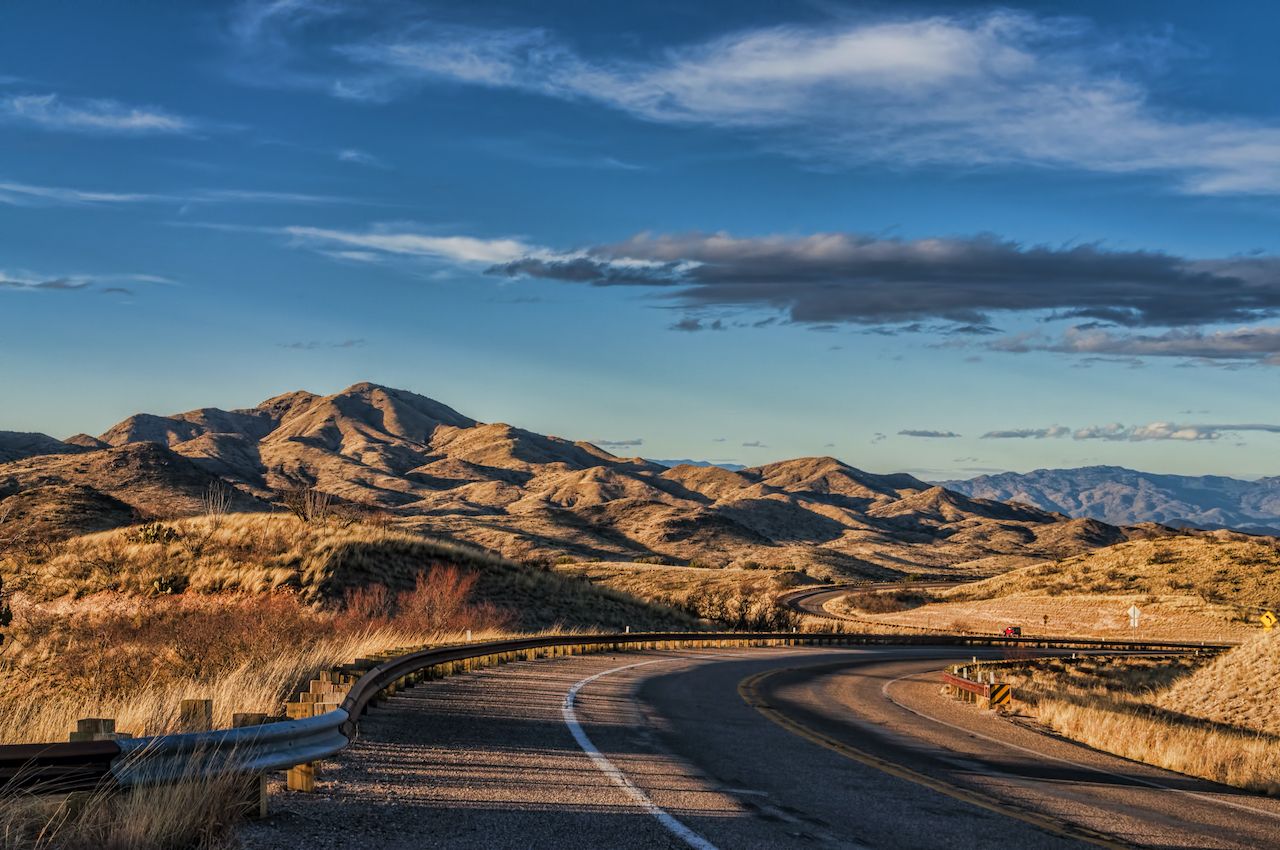 In the Santa Rita Mountains, just 25 miles south of Tucson, the cool refuge of Madera Canyon also happens to be one of the best birdwatching areas in the U.S. The forested microclimate is a perfect habitat for spotting the elegant trogon — males are especially distinctive with their metallic green and red-orange feathers. And under the green canopy roam javelinas, deer, turkeys, and mountain lions. Even the occasional jaguar has been photographed here. Coatimundi, the raccoon relative common in the jungles of Guatemala, make Madera Canyon their home as well.

Climb above the canyon if you feel up to a 10-mile hike, and you’ll end up on the peak of Mount Wrightson. At 9,452 feet, this is the highest point between Tucson and the border, and the 360-degree views from the summit are stunning, stretching all the way to Mexico. 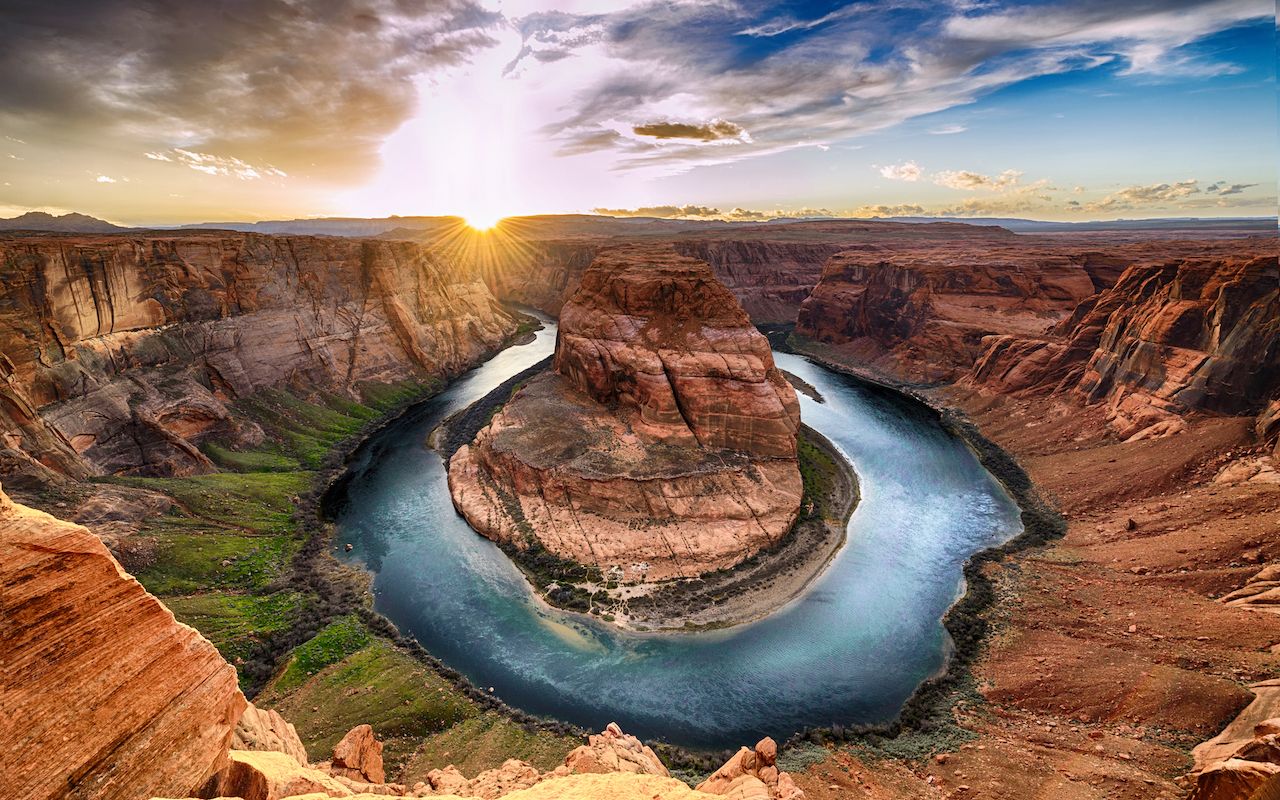 You’ve likely seen pictures, but you might not know their names or where to find these special places. Near the Grand Canyon but far from its crowds, the Colorado Plateau offers plenty of quiet red rock scenery. Horseshoe Bend, an easy hike from Highway 89 just south of the town of Page, may be one of the most photographed spots on the Colorado River. But if you come midweek, you can find solitude above this spectacular gorge. Colorado River Discovery offers half-day raft trips down on the water as well.

Nearby is the surreal Antelope Canyon. To see the legendary shafts of light among undulating ribbons of sandstone, you have to come here between spring and fall, and you must go with a Navajo guide; this is sacred land, and during sudden summer storms the narrow chasms can quickly become deadly.

These may be among the most photographed geological formations in the Southwest, but they’re surprisingly accessible, and nothing compares to being inside the landscape itself, in person, surrounded by the miracles of erosion and light.

Running northward from the Mexican border to just south of I-10, the San Pedro River is one of the last remaining free-flowing rivers in the Desert Southwest. Lined for some 40 miles with towering cottonwoods rising from semi-arid grassland, the region is a life-sustaining flight path for migrating birds, and over 370 species have been spotted in the area.

Humans have inhabited this fragile landscape for millennia — excavations at the Murray Springs Clovis Site have produced prehistoric spears and mammoth bones. Nearby, hike to the ruins of Presidio de Santa Cruz de Terrenate, an 18th-century outpost of the Spanish Empire.

A few miles east of the town of Sierra Vista, the San Pedro House is a good starting point to explore this unique ecosystem. A bookstore and information center will get you going, whether you’ll be hiking, biking, or looking up with binoculars. 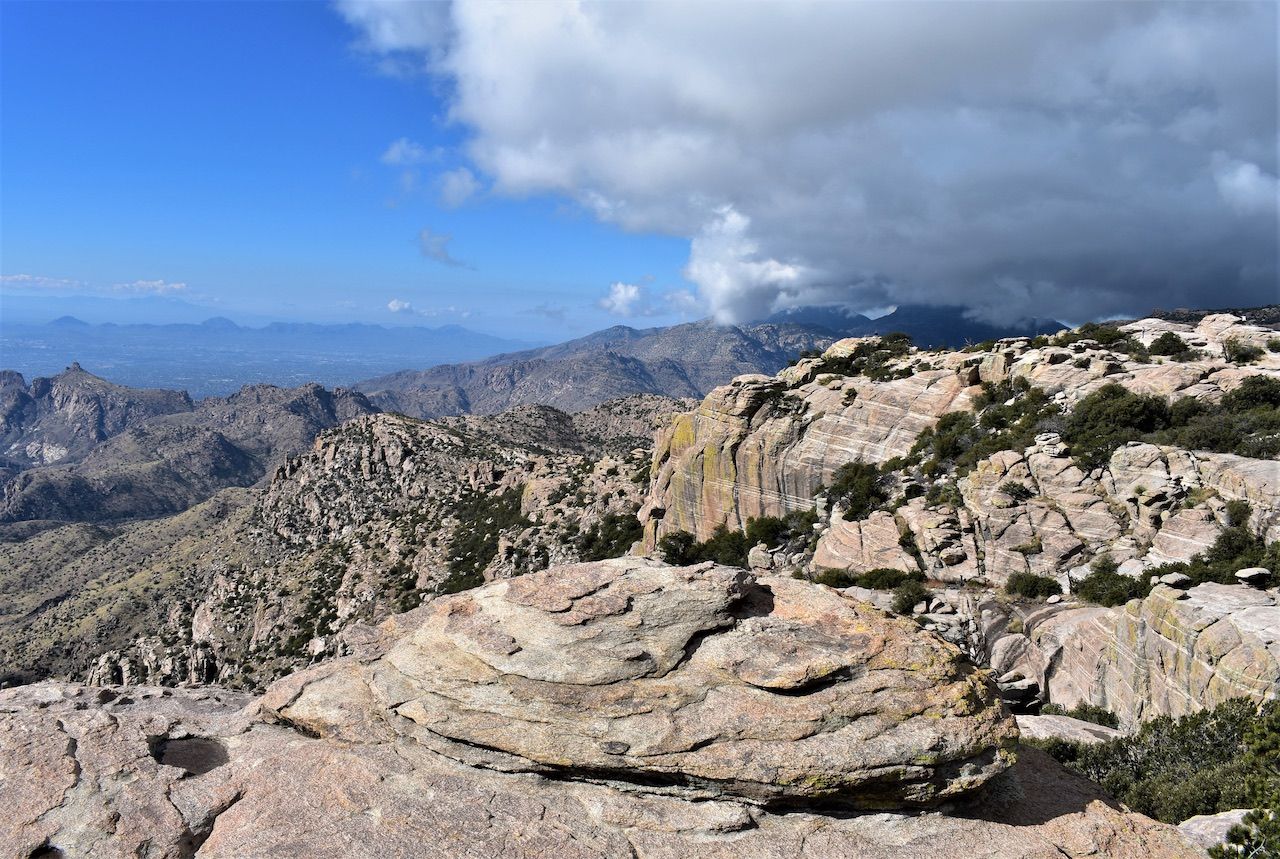 A larger region that encompasses many other entries on this list, Arizona’s sky islands are a series of mountain chains in the southeast of the state, isolated from one another by stretches of arid lowlands, rising like forested islands from the surrounding ‘seas’ of Sonoran Desert.

The Santa Catalinas are among the most prominent and comprise one of the most ecologically diverse spots in the country. Driving from Tucson up into these mountains is like traveling from Mexico to Canada — in less than an hour. As you climb from 2,500 to 9,000+ feet, you’ll make your way from towering saguaros through grassland, junipers, oaks, and pines, finally arriving at the mixed forest of aspens and Douglas firs surrounding Mount Lemmon Ski Valley — the southernmost ski resort in the U.S. It’ll also be a welcome 30 degrees cooler at the summit.

In the state’s extreme southeast corner are the Chiricahua Mountains — one of the last strongholds of the Apaches and a wonderland of pillars and zoomorphic rock formations rising through the evergreens. These higher elevations are still havens for mountain lions and bears, perfectly at home above the sun-baked lower expanses. Aside from the Santa Catalinas and the Chiricahuas, you can hike the Huachucas, the Pinaleños, the Peloncillos, the Santa Ritas, the Baboquivaris, and the Tumacácori Highlands, all within a few hours’ drive of Tucson and Sierra Vista.

To the southeast of the Grand Canyon, the region around Flagstaff is home to one of the largest ponderosa pine forests in the world. Stretching from the Colorado Plateau along the Mogollon Rim to the New Mexico border, these stately pines cover tens of thousands of acres.

Rising above the forest are Arizona’s highest mountains — the volcanic San Francisco Peaks. Summer and fall offer endless hikes; one of the best is the climb up Humphreys Peak. At over 12,600 feet, this is the highest point in the state. In winter and early spring, there are 40 runs to choose from at the Arizona Snowbowl alpine resort. And just west of town, Flagstaff Nordic Center is the place to go for cross-country skiing, snowshoeing, and snowbiking (think a pair of skis attached to a bike, and you’re on the right track).

This is high country, ranging from 6,000 to over 12,000 feet above sea level, so give yourself time to acclimatize to the lower oxygen levels. 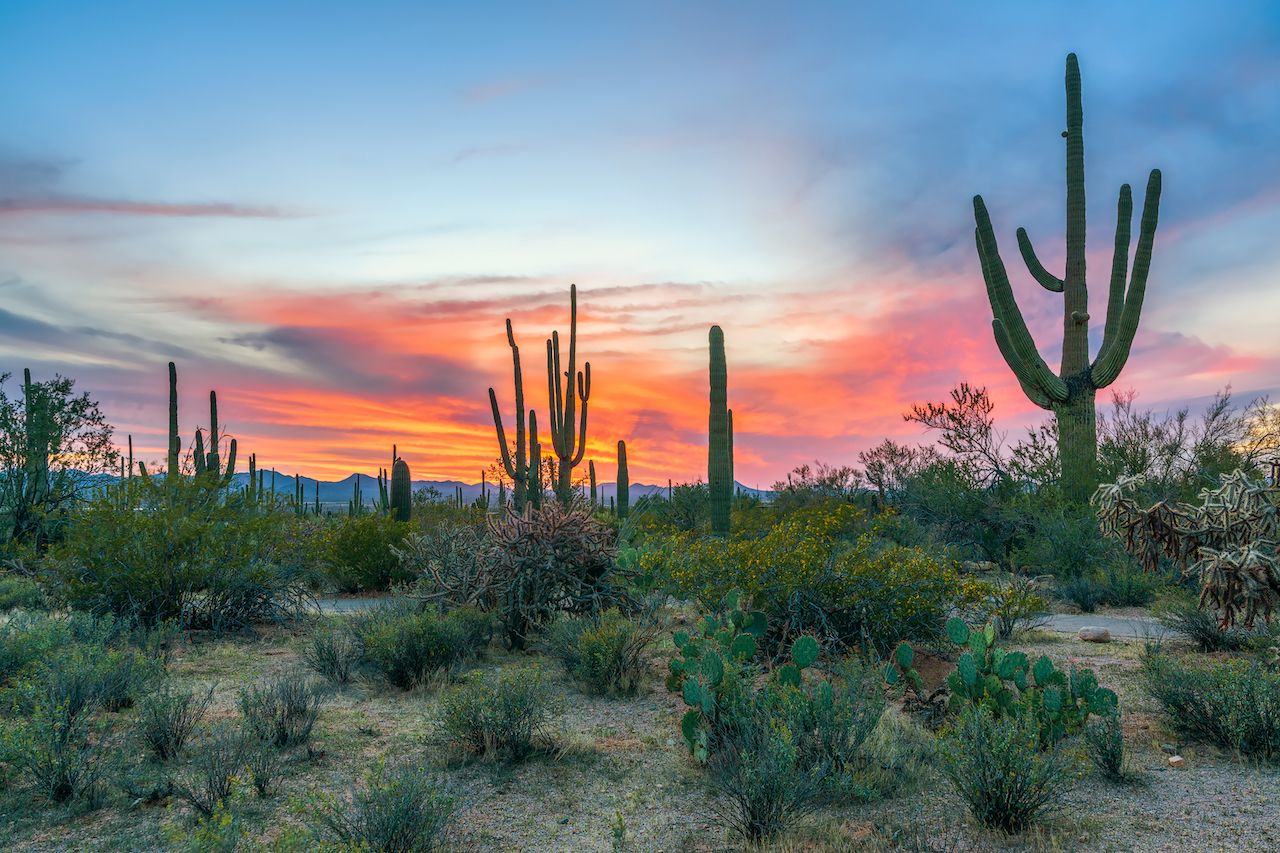 Tucson is flanked on its western and eastern edges by Saguaro National Park, showcasing the giant cacti native only to the Sonoran Desert. With a lifespan of up to two centuries, Saguaro can reach the height of a six-story building and grow as many as two dozen arms.

Compared to its more famous Arizonan cousin, the Grand Canyon — which receives 7 times as many visitors — Saguaro is relatively quiet. Hiking, trail running, and horseback riding are popular in both divisions of the park, but you can also drive the leisurely loop roads if you want to see the cactus forests from the comfort of your car.

The park’s western division sprawls over the Tucson Mountains — the sunsets are spectacular and you can even get up close to pre-Columbian petroglyphs carved by the Hohokam people. When the spring rains are right, wildflowers blanket the slopes. In the eastern division, trails lead up from the saguaros into pine forests on the 8,000-foot summits. And in the annual Labor Day race, 1,000 runners gather before sunrise to beat the heat on an 8-mile loop road in the foothills of the Rincon Mountains.

7. Ramsey Canyon in the Huachuca Mountains

In the heart of the Huachuca Mountains, find homesteaders’ cabins and apple trees as you hike among deer and wild turkeys in this Nature Conservancy preserve just north of the border with Mexico. Chihuahua pines and agave share the microclimate with cottonwoods, sycamores, and even maples; autumn here is a brilliant show reminiscent of the Appalachians thousands of miles away. Spring through fall, guided hikes that focus on the region’s birds (including 15 hummingbird species) are led by the Ramsey Canyon Preserve.

Black bears are common at Ramsey Canyon, so guides recommend you don’t pack food with you. Come early in the day or midweek, since there are only a couple dozen parking spaces at the preserve’s entrance — first come, first served. 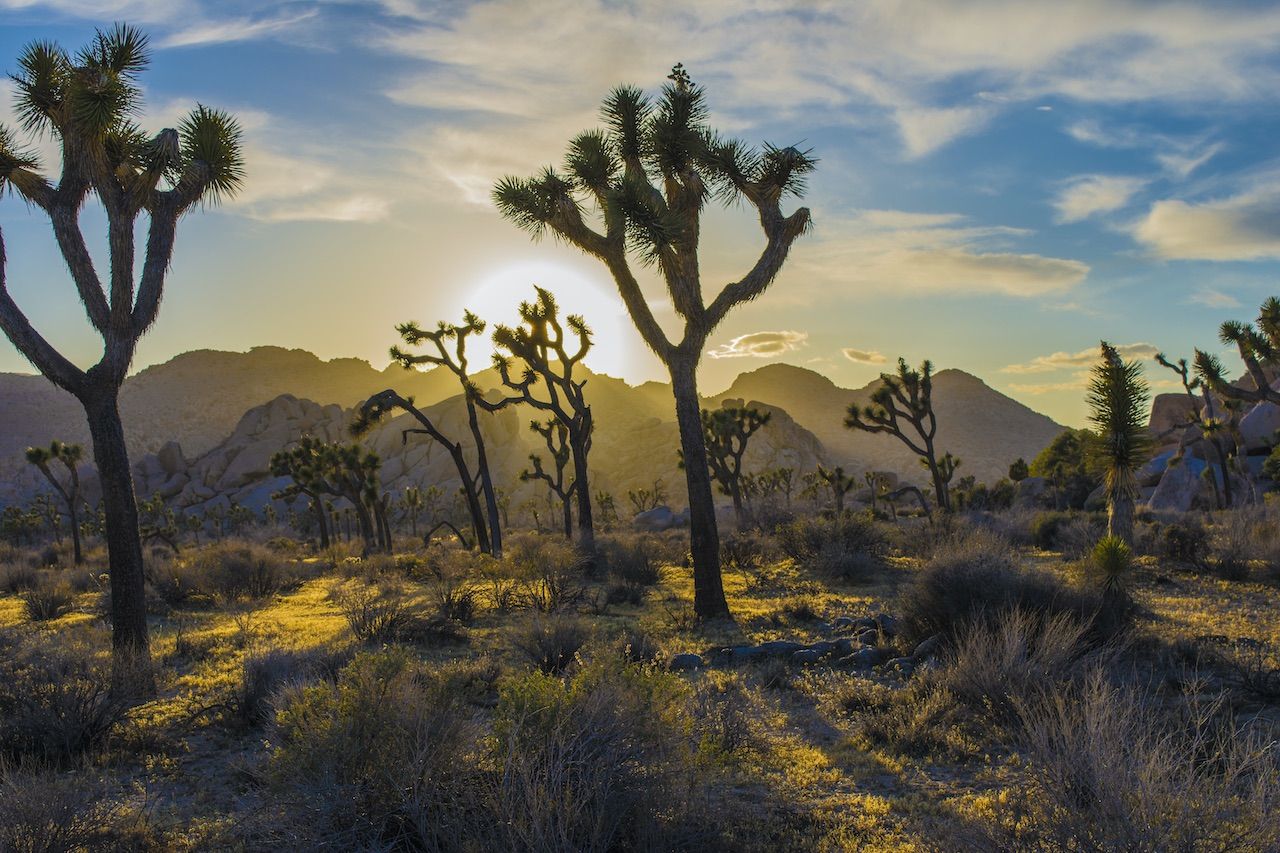 Except for the anthropomorphic arms of the saguaro, perhaps no other botanical profile is as emblematic of America’s Desert Southwest as this giant spiky yucca. In western Arizona, the Mojave and Sonoran desert ecosystems converge, and for 50+ miles along US 93, between the towns of Wikieup and Wickenburg, you can drive the Joshua Forest Scenic Road surrounded by hundreds of these enigmatic plants.

The heritage of mining prospectors and ranchers is alive and well along this highway. Driving through, you might spot a rodeo in Wickenburg; you might even want to stay and become part of the scene at the Flying E dude ranch. Among the valleys, mountains, and rolling hills, temperatures can go from well below freezing in winter to well over 120 degrees in the summer.

Even though this is the main highway between Las Vegas and Phoenix, gas stations are few and far between, so always travel with plenty of water. You’re in the heart of the Southwest, after all.

This post is proudly produced in partnership with the Arizona Office of Tourism.
Tagged
Hiking National Parks Insider Guides Arizona, United States Arizona: Go Grand
What did you think of this story?
Meh
Good
Awesome
✖
travelstoke
Download the mobile app
stoked by