Chill out on tranquil isles in the far south of Thailand

From the lonely shores of Changlang Beach on the Thai mainland, the view is of a calm sea dotted with craggy, verdant isles. As the sun sets, the receding tide barely laps the shell-studded sands while locals wade in placid waters, trailing fishing nets.

It’s a wonderfully languid scene, epitomizing the perennial laid-back vibe of this province way down on the western coast of Thailand

Trang (pronounced ‘Dtrang’ with a hard consonant) encompasses an area with a 120-mile coastline as well as 47 islands stretching from the lower Andaman Sea to the Straits of Malacca.

The provincial capital of Trang was once a bustling port, attracting Fukien Chinese settlers at the turn of the 20th century.

Although the town moved thirty miles inland due to flooding, it retains charming outside influences in its architecture, temples, and food; the latter includes a unique breakfast consisting of strong coffee (‘kopii’) laced with condensed milk, dim sum, and hot soymilk.

Unlike nearby Phuket or Krabi, Trang has been spared from rampant development, thanks to a vibrant local economy not dependent on tourism.

Unlike nearby Phuket or Krabi, Trang has been spared from rampant development, thanks to a vibrant local economy not dependent on tourism.

Trang will probably remain pristine, given that two thirds of the province, replete with lushly forested hills, white sand beaches, limestone caves, and waterfalls, has been designated as national parkland.

Today, the only readily visible indications of the devastating event are tsunami escape route signs posted throughout coastal areas.

The islands beckon during the sultry month of April, especially if your idea of paradise includes getting back to basics. The Changlang beachfront has no vendors, Internet cafes, and fast foods joints, and the islands hold promise of even more blissfully simplistic surroundings.

You could spend months exploring all the islands of Trang. But for starters, there are five larger ones off the coast that are regularly serviced by ferries from the mainland: Muk, Kradan, and Hai in the north, and Libong and Sukorn in the south. For easy island hopping, hire your own long-tail boat with an operator/guide.

Ko Muk is the most well known, not because of its sun-drenched beaches or Muslim fishing village, but because of an intriguing natural formation located on the uninhabited side of the island.

Called the Emerald Cave (‘Tham Morakot’), its name becomes obvious once you swim through a concealed tunnel that breaks into a green lagoon fringed by white sand and contained by tall limestone cliffs framing a patch of sky.

The cave is only accessible during low tide, and a guide will be especially handy as you may bobble for 260 feet in pitch darkness, depending on when you go. Plan carefully; otherwise, you may be stuck inside until the tide goes down. 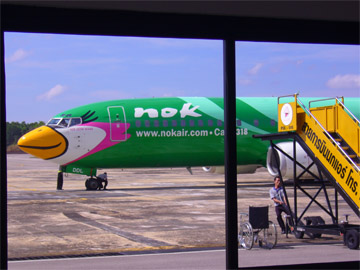 Ko Kradan holds the Guinness Book of World Record for the largest underwater wedding, where couples (and diving enthusiasts) exchange vows and sign marriage certificates under the sea every Valentine’s Day.

Aside from this quirky, fun-loving extravaganza, Ko Kradan boasts some of the best snorkeling spots in the deep azure waters off its cliffs.

Nature lovers will enjoy Ko Libong, Trang’s largest island and sanctuary to a variety of local and migratory birds. It is also home of the dugong, or manatee, that feed off of the island’s sea grass beds. The timid mammal is now endangered, and sightings are extremely rare.

Ko Sukorn, Ko Hai, and the uninhabited isles in between are less frequented, but offer hidden reefs and quiet spots for swimming, snorkeling, and kayaking.

Accommodations are readily available on Muk, Kradan, Hai, Libong, and Sukorn islands, ranging from spartan to more kitted-out bungalows. Mid-range to luxury hotels can be found on the mainland. Check sites such as www.hotelthailand.net for an extensive listing of places to stay.

While there is no bad time to visit, the drier months from December to April are considered the high season, reflected in higher hotel rates and visitor numbers. If you’re on a budget (or slightly misanthropic), go during the monsoon season from May to October. Sunshine is still aplenty, and short bursts of rain offer relief from the heat.

While food choices are an eclectic mix of Thai, Chinese, Muslim, and international fare, there is not a wide range of dining venues. At hotels, food and drink prices tend to be on the high side, compared to the mainland. However, the seafood cannot be fresher, and you can usually grill the catch of the day to your own liking.

You can also visit the many Muslim fishing villages in the area for inexpensive meals and possible accommodations.

There isn’t much in terms of nightlife outside of open-air resort bars and the occasional impromptu beach party. Expect mellow evenings spent sipping beer while watching karaoke or bonding with fellow travelers. 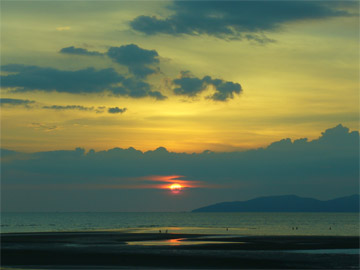 Nok Air, the low-cost affiliate of Thai Airways, flies directly from Bangkok’s Don Muang Airport to Trang every day. Weekday fares are cheaper (starting from $60 one way, 80-minutes) and bookings can be made online.

Once you’re in Trang, get on a taxi or ‘song thaew,’ a pickup fitted with narrow wooden benches and tin roof, bound for one of the piers (if you’ve opted for train travel, you’ll already be near Kantang pier).

Certain piers are much closer to some island groups: Pakmeng, Chaomai, and Kuantunku piers are north, nearer to Ko Muk and surrounding isles; Kantang and Taseh piers are south, closer to Ko Libong and Ko Sukorn.

Ferries depart regularly and a one-way ticket costs from $4 to $10, depending on your destination. If traveling in a group, it may be just as cost-effective (and faster) to charter your own long-tail boat at the pier.

Alternately, you can get to the mainland or islands from Phuket, Krabi, Ko Lanta, and other nearby provinces. Check with local travel agents for options.

Many Matador members are backpacking in Southeast Asia right now!

The intrepid Noellejt wrote some beautiful blogs about her time at the best little cooking school in Thailand.

Justin88 is traveling in South East Asia until he runs out of money, currently bound for Malaysia. Compash is the founder of a permaculture farm and natural building center near Chiang Mai. Nora Dunn is traveling in Thailand and Malaysia…

Tagged
Budget Travel
What did you think of this story?
Meh
Good
Awesome