THE SPACE NEEDLE is a familiar, cliche, and highly photographable landmark. But from my neighborhood it is also a marker pointing east, towards the Olympic Mountains, the Pacific, and towards the sunset. 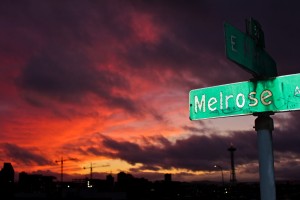 Melrose and Mercer. All photos by the author.

I have been stepping out of my apartment to snap photos of the sunset when the inspiration strikes for the last 3 months or so. I do it as an afterthought, an excuse to get outside before the world goes dark.

When my wife and I decided to move to Los Angeles and began preparing to uproot ourselves, I tripped on the thought that I would not have any more Seattle sunsets, or Seattle anything for that matter. I will have new sunsets, L.A. sunsets, and I will have to learn to love them.

Maybe it is true what they say, that you don’t really know what you have until it is gone. I have lost a precious thing or two in my 30 years and I don’t want ignorance of what I have and what I lost to slap me in the face once more. I want to appreciate what I have while I still have it, while I can still pull it into focus and frame it up just so.

This is my love letter to Seattle and her sunsets. When I stand on Capitol Hill, where 99% of these photos were taken, I look over downtown to Elliot Bay and the setting sun but I also look across the water to where I was born and raised. The rise of trees that stands in parallax with the jagged mountains is where I spent the first 20 years of my life.

Where I will spend the next 20 is a question that never strays far from my mind as I pull reams of packing tape across overstuffed boxes marked ‘fragile’. 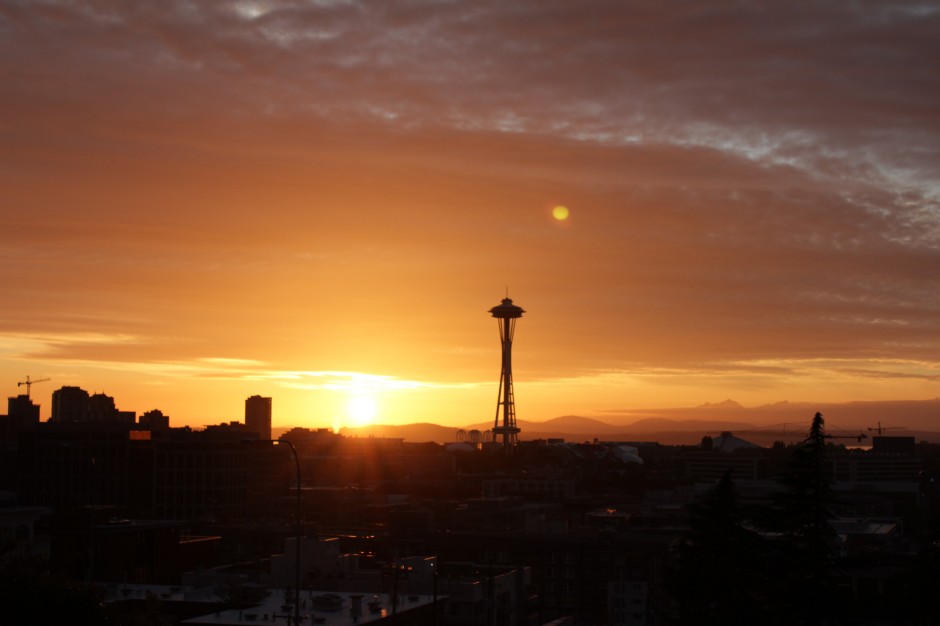 The sun brightens momentarily before it dips behind the mountains and lights up the clouds. People think it rains here all the time. It doesn't. We get more days that end in a scene like this than you would believe. But you wouldn't know it unless you are prepared to peer behind the rain cloud and stand ready for a sun that is surely there, behind all that drizzle. Fo shizzle. 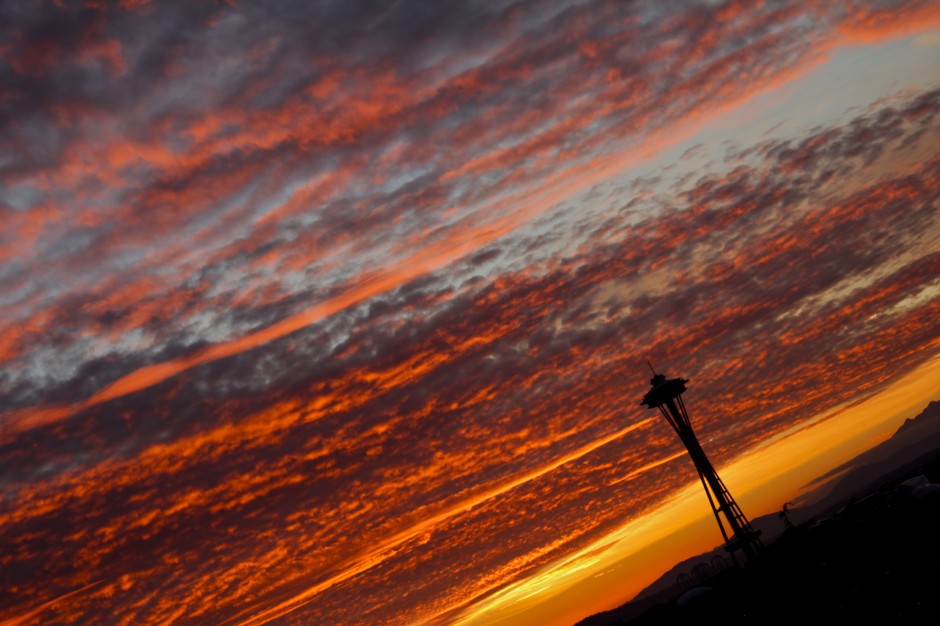 The Space Needle is such a fixture of the city that sometimes I have to tilt my head askew to make the view new. Freud would almost certainly accuse me of being some sort of phallic photo freak, and in love with my mother. But I digress. 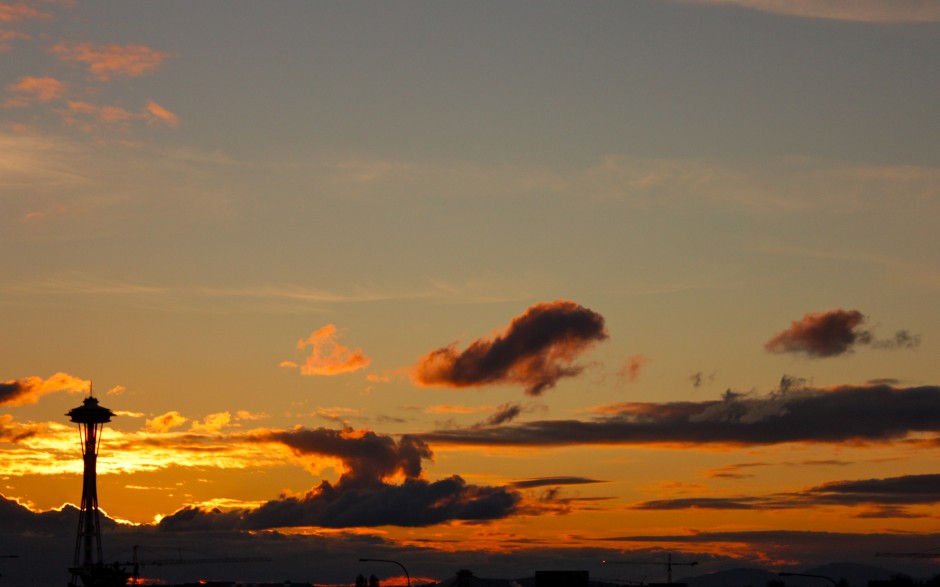 The mountains beyond the city are obscured by the scant clouds that blow towards the North. I lean against the rail guard that separates me from a 40 foot drop onto Interstate 5. Feral lavender sprouts from the cracks in the raised sidewalk, tangling fragrant flowers with the flotsam of urban life. 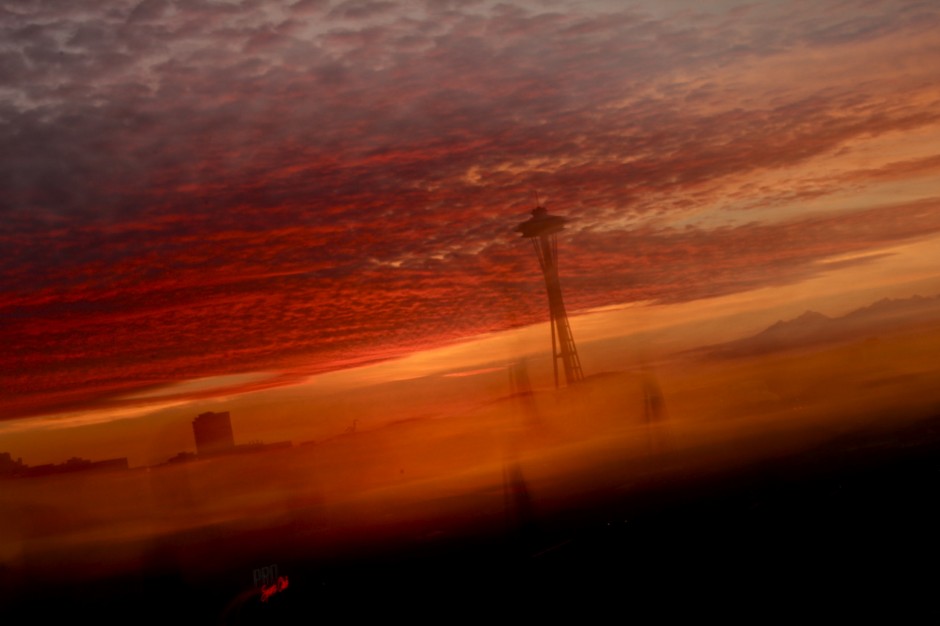 By leaving the shutter open on my camera the skyline becomes a foggy apocalyptic scene set 111 years in the future in a deserted, wind swept Seattle. Or something. 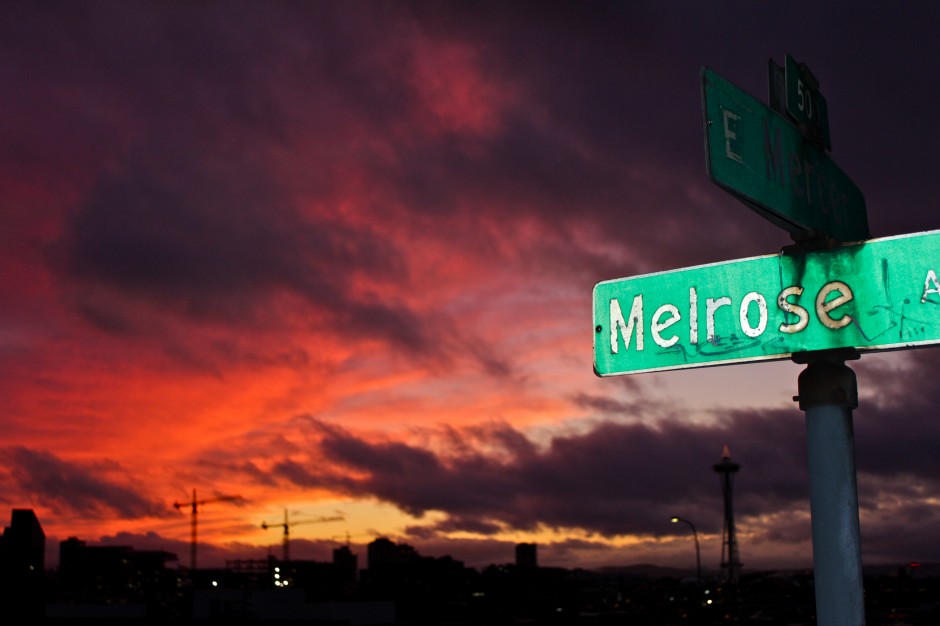 The street signs that mark my usual sunset hangout are the subject of this photo. The grimy luminescence of Melrose Ave gives the pastel burst of color beyond a geographical framework. Melrose is a great street - an overlooked and lawless promontory that nearly stretches the length of Capitol Hill. When I think of the streets that I will miss in Seattle, Melrose rises first in my imagination. 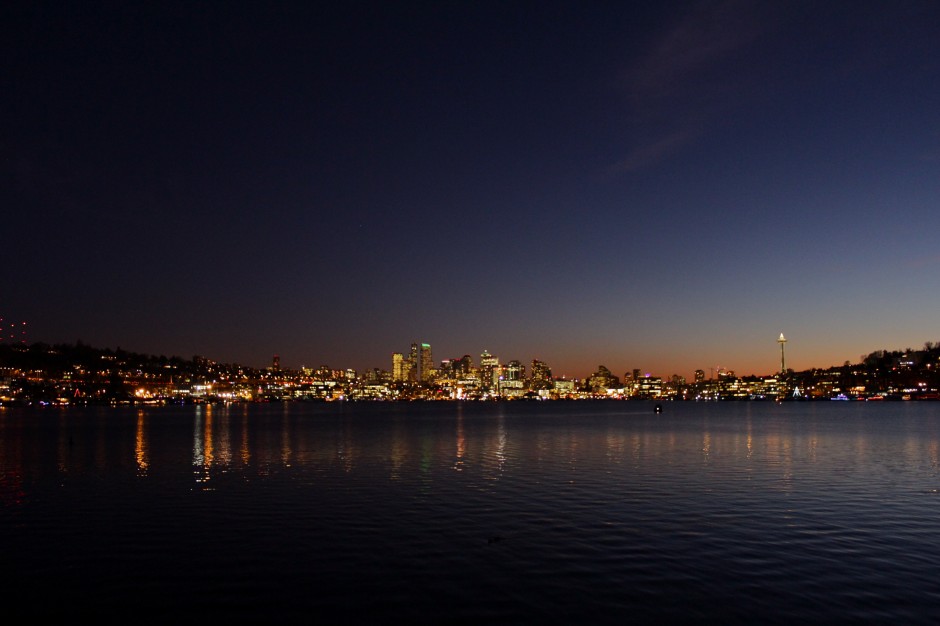 On the final leg of a four hour bicycle ride through various Seattle hoods, the cowl of night has almost completely covered the skyline. Taken from Gasworks park - an awesome for lurking just after sunset. A cluster of dog walkers clamour up, some fire spinners are lighting up their poi and runners stretch their quads as I unclip my helmet. It's cold but not too cold. 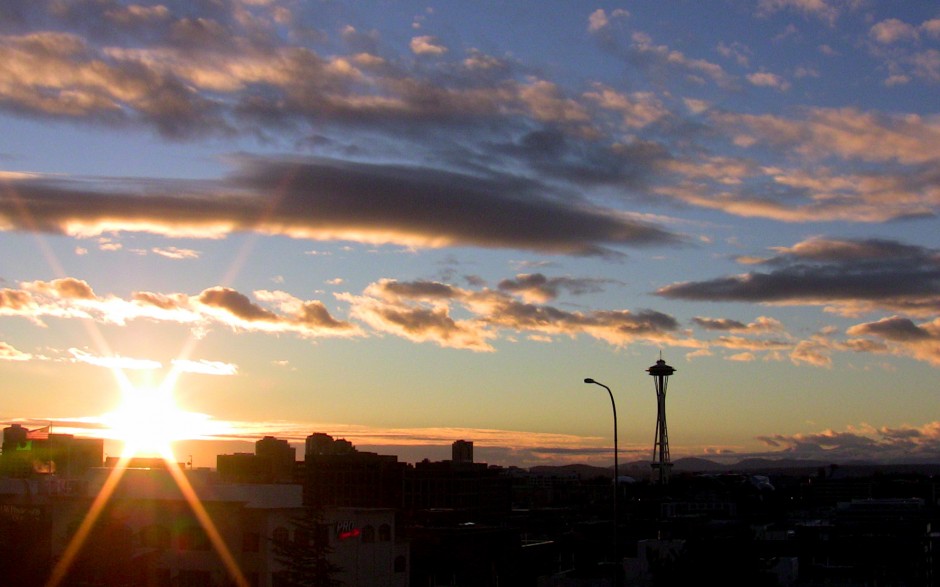 Taken after a long stretch of Christmas gatherings, this photo is by a Josh that is brow beaten with holiday cheer. In the days between Christmas and the New Year the skies opened up for some uncharecteristic blue. See how clean and bright the city looks? Notice the clarity in the air? The Pacific Northwest has a way of cleaning house with wind and rain. 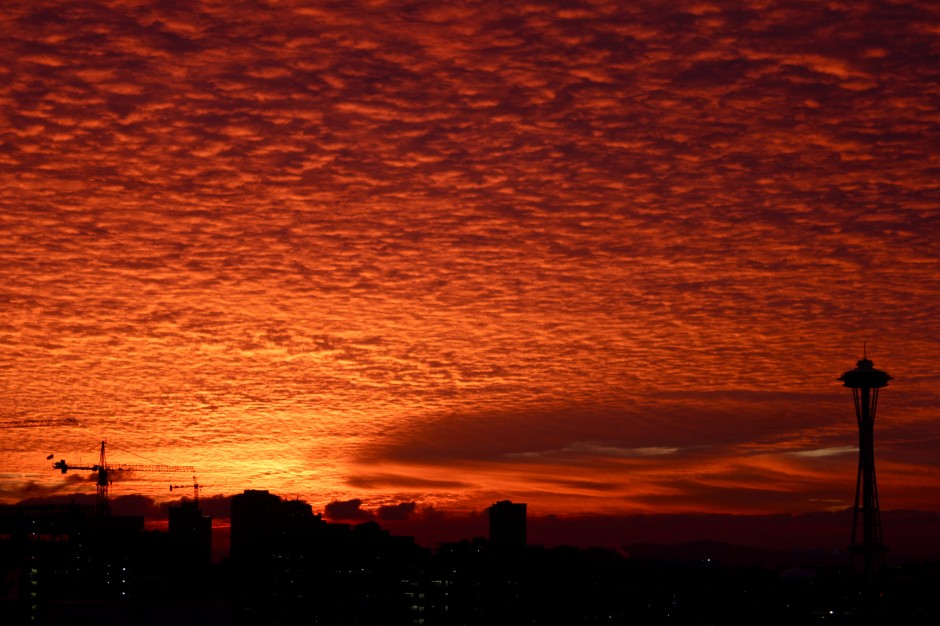 After a day of packing, sorting through belongings and generally ripping my life to shreds I took a moment to step outside. I knew it was a special sunset even before I had put my coat on and grabbed my camera. The air seemed to be filled with orange and pink smoke, such was the reflective power of the sky-wide sunset. From my usual photo corner of Melrose and Mercer I counted no less than 17 people stopped and taking pictures. Some were still in their cars, focussing camera phones through grimy windshields. 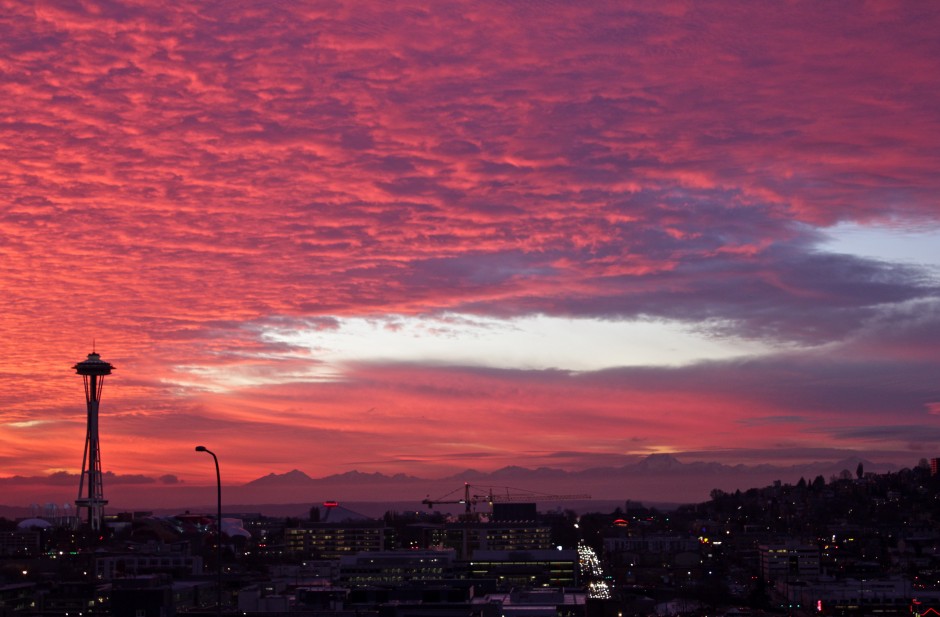 Some sunsets change so much in a matter of minutes that one photo doesn't do it justice.

Tagged
Galleries Seattle, WA, United States
What did you think of this story?
Meh
Good
Awesome