Katmai National Park in southwestern Alaska is known for two things: the volcanic landscape of the Valley of Ten Thousand Smokes…and bears. The headwaters of numerous salmon streams bring massive numbers of fish to the region each summer. And those fish lure dozens of Alaska Brown Bears.

On the several photography and paddling trips I’ve led to Katmai, I’m often asked the difference between Brown Bears and Grizzly Bears. The short answer is there isn’t one — they’re the same species. The long answer is slightly more complicated. Grizzly Bears are found in the interior of the continent, while Brown Bears are coastal. In Alaska, coastal bears are much larger than interior bears because they have access to calorie-rich salmon. Grizzlies are smaller, and due to their less reliable food sources, more predatory.

Behaviorally, the two differ as well. Grizzlies are shy, skulking things that appreciate personal space. They don’t mingle with other bears and prefer humans to stay a few hundred yards away. Coastal Brown Bears, particularly those at Katmai, are incredibly social. At bear-viewing areas like Brooks Falls (where these images were made), it’s possible to see more than a dozen bears at once. Katmai’s bears are also much more tolerant of humans, and it’s possible to end up just feet away as one passes by. That proximity yields some of the best bear photography opportunities available.

Getting to Katmai requires a flight or two from Anchorage. There are two main options: a tour (usually day trips) organized by flight services that will take you straight from Anchorage to Brooks in a small float plane, or you can fly commercial airlines to the town of King Salmon, where a float charter can be arranged for the short trip to the park. Neither option is cheap, and if you want to stay overnight during peak season (July and August), make campground or lodge reservations early. 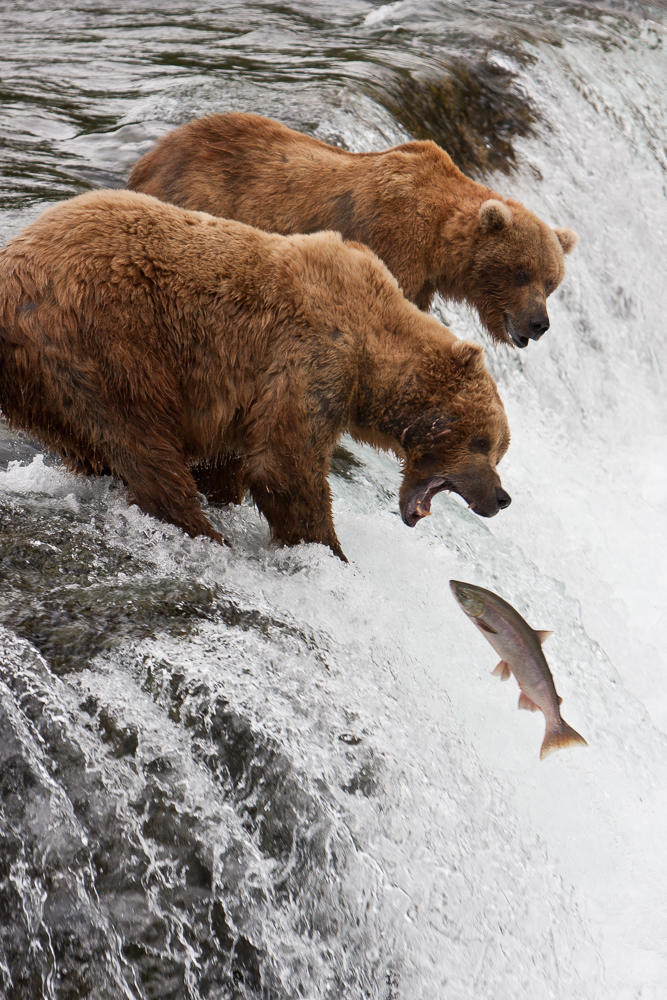 This is the classic view of bears at Brooks Falls. This image, made in July, was during the peak of the Red Salmon run, and bears were everywhere. The falls are only about four feet high, but they create a major hurdle for the migrating salmon. Each bear has its own strategy for fishing; the first here was a master at snatching jumping fish from the air, while the second looked enviously on. 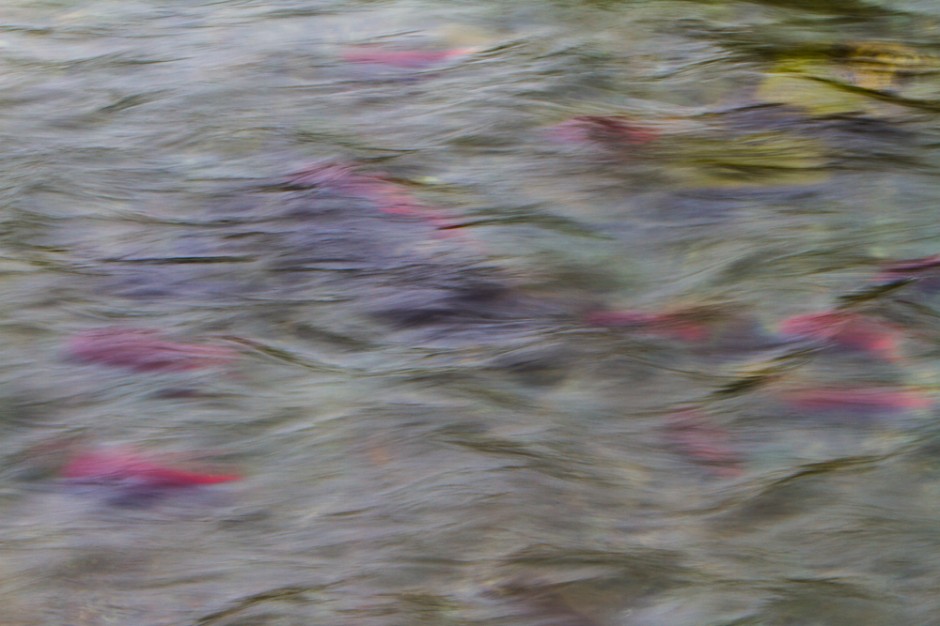 The bears come for the salmon, which fill the river. These late-season Red Salmon (also known as Sockeyes) have changed into their spawning colors and stand out vividly against the rocky bottom of the river. 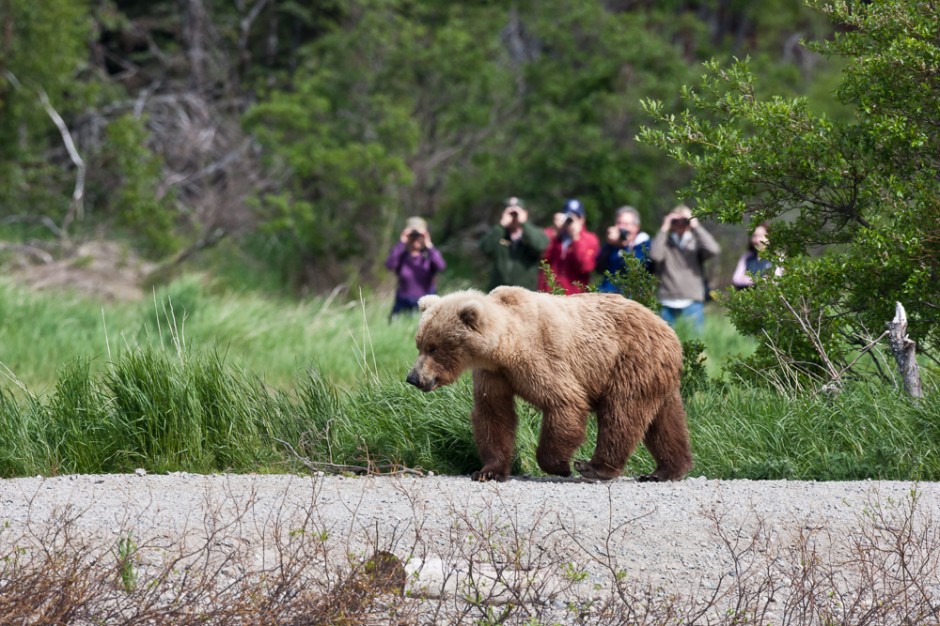 Bears get the right of way at Brooks Falls. When one comes lumbering down the trail, people clear out. Park rangers are stationed at several locations along the trail network to enforce the policy. 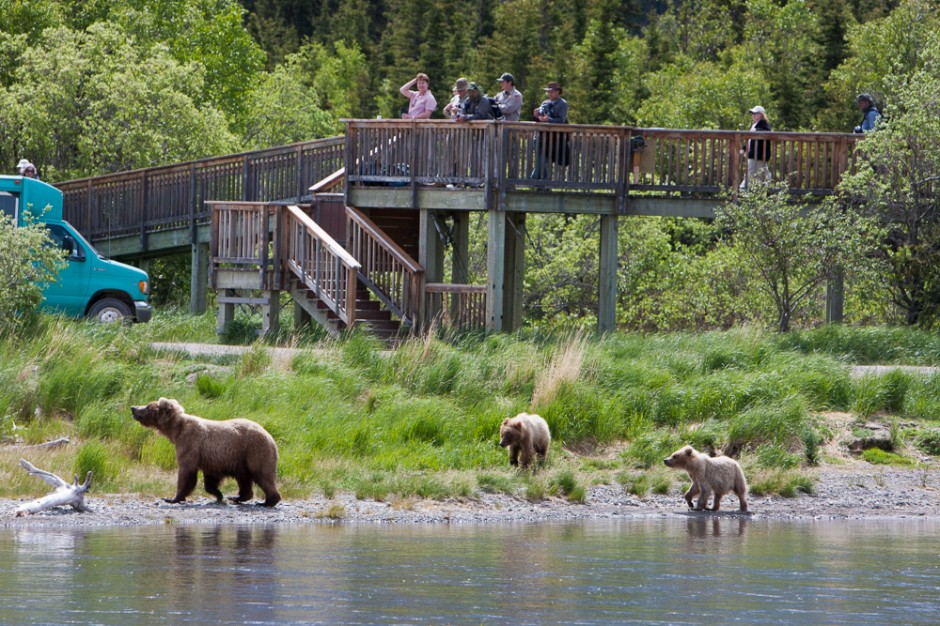 Viewing platforms are available at a few points along the Brooks River, providing safe places to watch and photograph the bears. 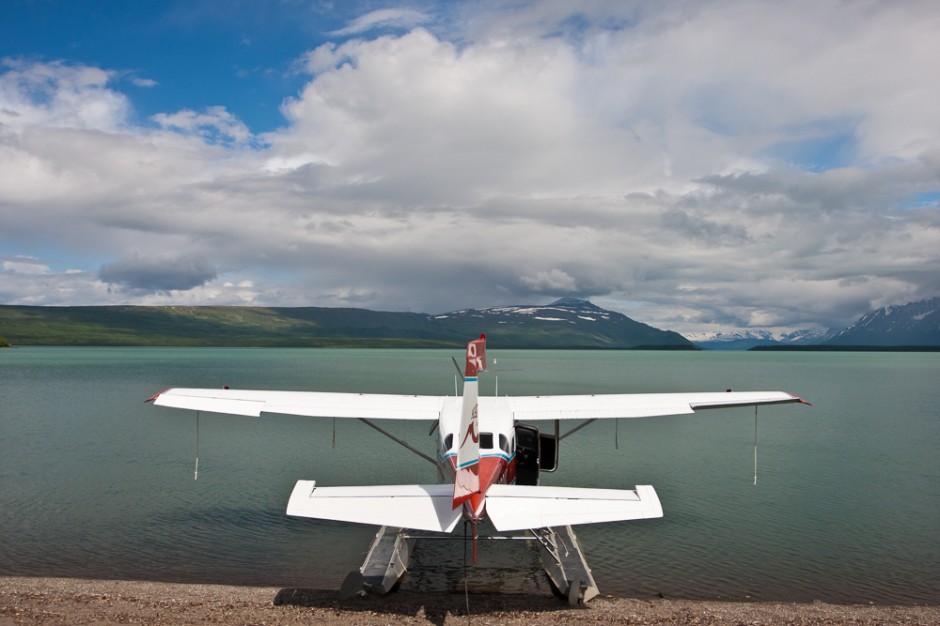 The only way to get in and out of Katmai is via float plane. Flying direct from Anchorage is easy, but trips are regularly cancelled due to bad weather. More reliable are flights from King Salmon, which is a 20-minute hop away. 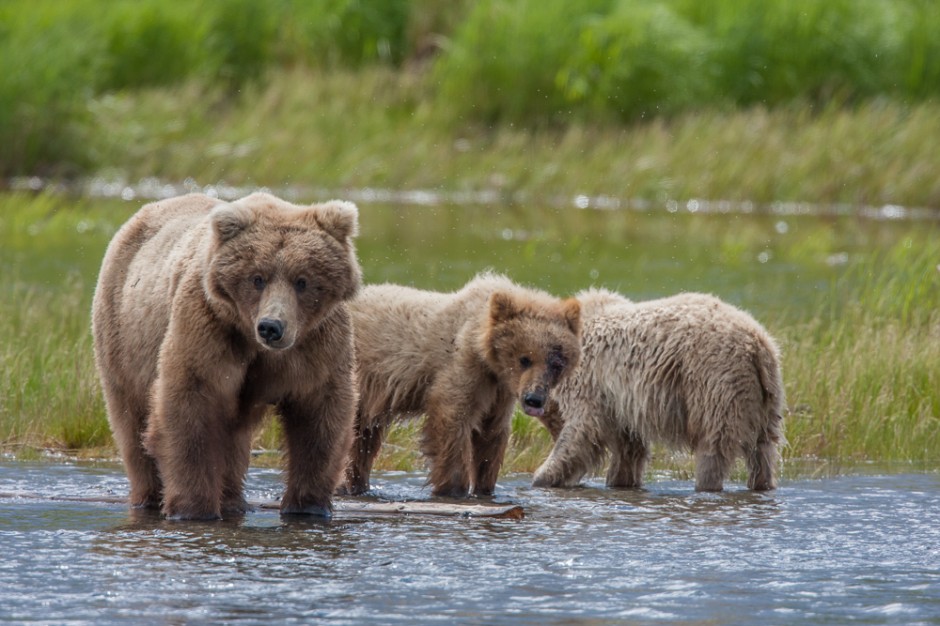 Cubs stick close to their mother for the first two to three years of their lives. They learn to fish, where to den, and how to identify dangers from their mother. These dangers are very real. The cub in the middle of this frame has been blinded in one eye, likely from a blow by an aggressive male bear. Males will kill cubs in order to bring their mothers back into breeding condition. The females know this and will viscously defend their cubs if necessary. Despite her best efforts, this young cub got a nasty swipe, leaving its long-term fate in doubt. 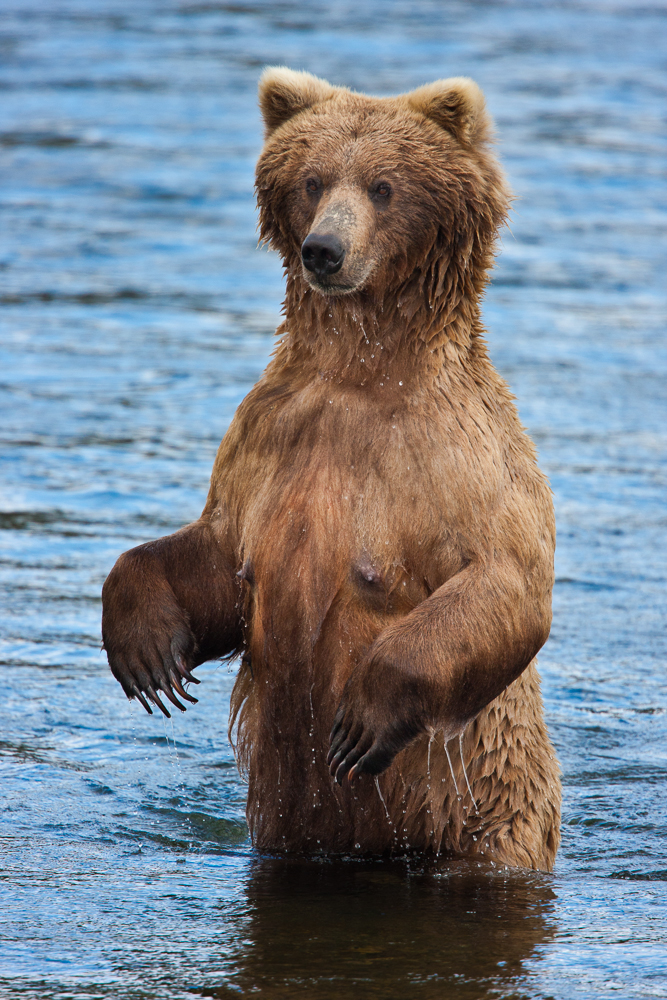 People commonly think a standing bear is an aggressive bear. Not true. In fact, bears stand up when they're curious or trying to get a better look at their surroundings. This bear rose onto its hind legs to get a perspective on where salmon might be lurking. 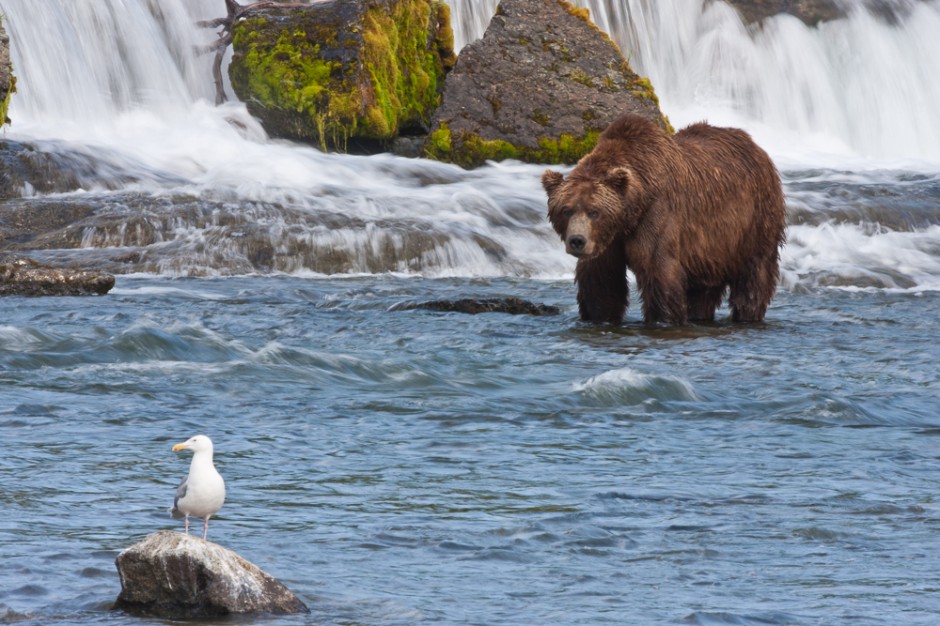 Bears aren’t the only creatures to make their living from the salmon. The gull in the foreground lived happily on the scraps left behind by the messy bears. 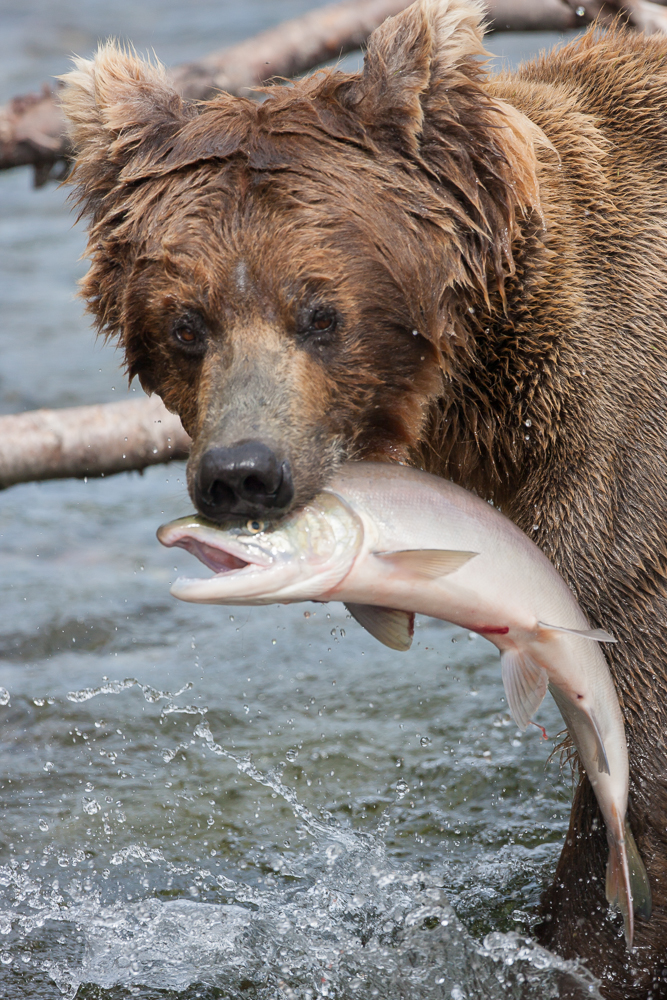 Bears can eat a dozen or more salmon per day during the peak of the run. During a period called hyperphagia (extreme eating), bears will consume so much food their systems can only process the best parts as they put on weight for the winter. The forest and riversides were covered with bear scat full of half-digested salmon. 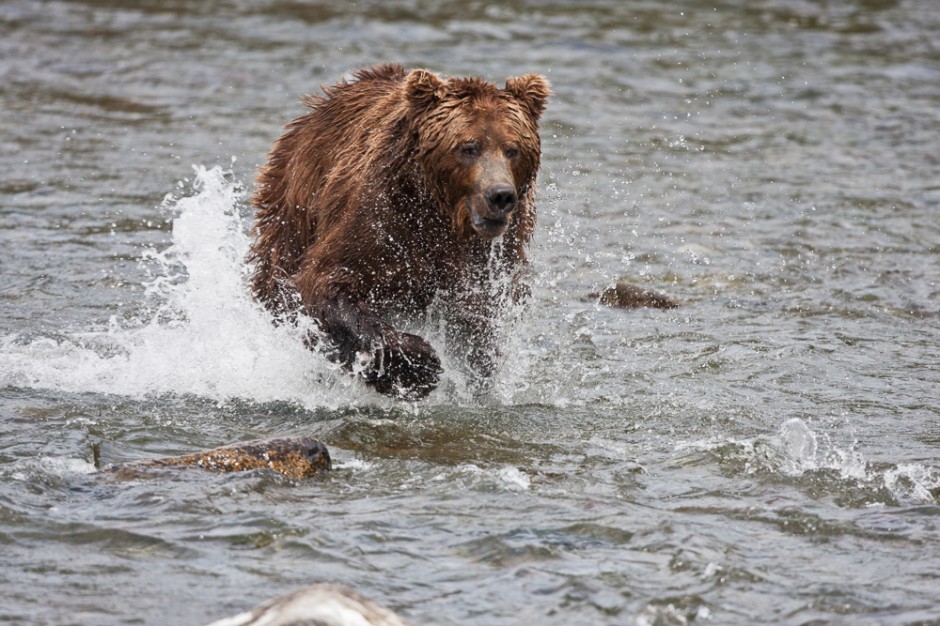 Each bear has its own strategy for fishing. Some snag jumping salmon, others paw around in deep pools trying to pin salmon to river bottom, and others, like this one, aggressively chase salmon into the shallows where they can be more easily captured. From the perspective of a photographer, this third strategy provides the best action. 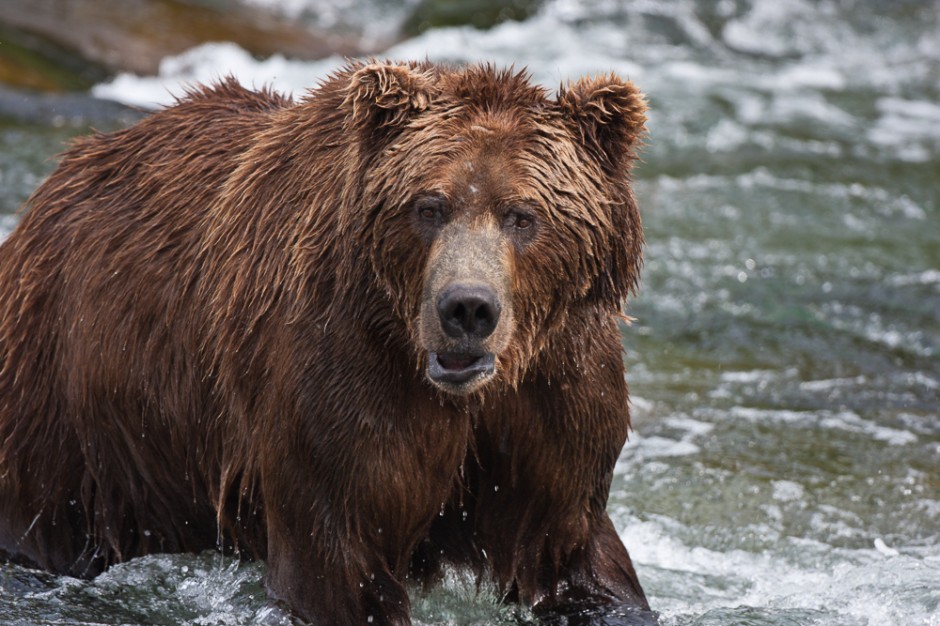 This bear came up from a chase empty-mouthed, and then swung it’s head over to look straight down the lens of my camera. 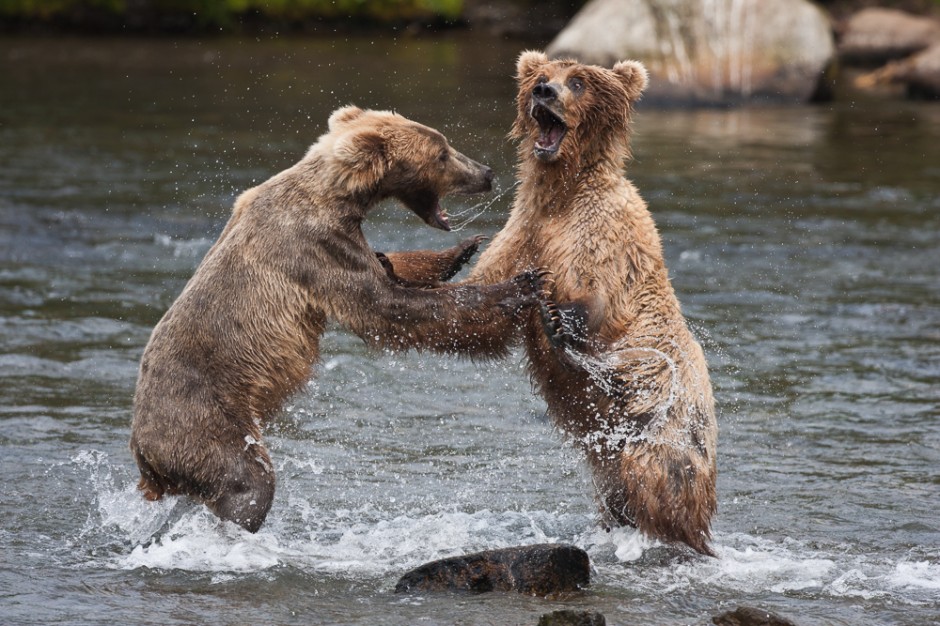 Though fairly tolerant of one another, Katmai bears do occasionally lose their temper. These two had a dispute over a fishing spot. The bloodless fight lasted only a few violent seconds before the bear on the right turned tail and ran downstream. 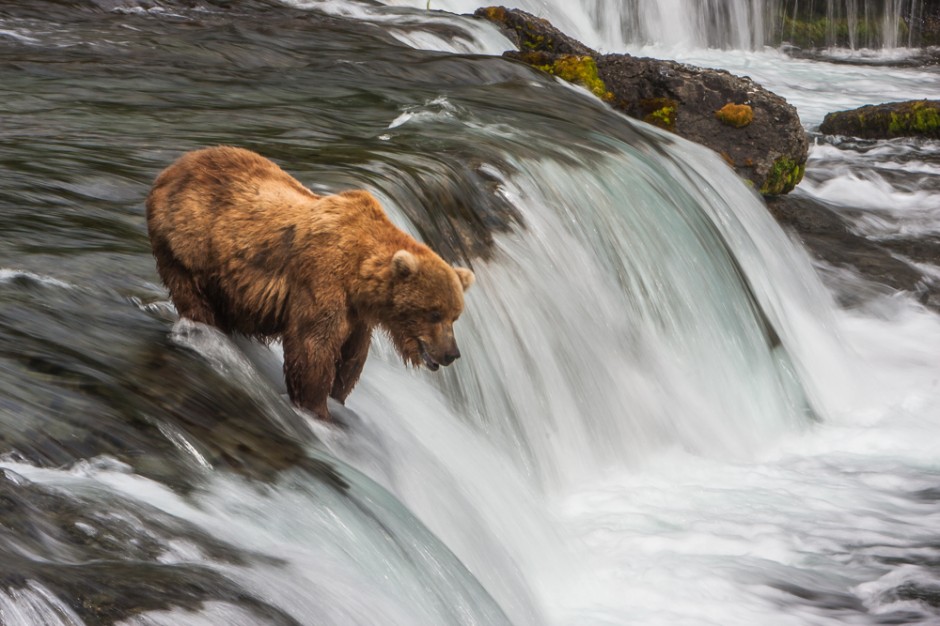 Quiet at the falls

Usually you won’t be alone at Brooks Falls, as tourists and photographers jostle for position on the platforms. But occasionally I’ve had the place to myself. I made this image one evening when I found myself alone at the falls. This was the only bear present that evening, and he wasn’t having any luck. Still, he stood patiently waiting for a fish to jump. I was some 10 yards away and just watched him as he watched the river. After 30 minutes of stillness he raised his head, gave me a look, and lumbered into the woods, leaving me alone with the tumbling water.