Experience the best of Vietnam with this classic cycling adventure.

THERE’S NO SOUTHEAST Asian road more iconic than Vietnam’s National Highway 1. Running the length of the narrow, coastal country, it connects the major cities of Hanoi and Ho Chi Minh. After decades of conflict that threatened to tear them apart, the Vietnamese now see the highway as a symbol of national unity.

Cycling Highway 1 unlocks experiences most travelers miss. You’ll discover rural hamlets far removed from the modern world, and famous guidebook sights will seem all the sweeter when earned through your own pedal power.

WHAT YOU NEED TO KNOW

No cycling test required—this adventure is open to people of all abilities. 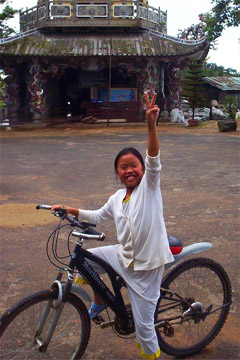 For those seeking a structured, less-demanding trip, many agencies conduct vehicle-supported group rides. These typically involve a mix of cycling and van transport. Some examples include VeloAsia, which offers a couple set tours as well as a customized route option, and the 17-day Saigon to Hanoi expedition run by SpiceRoads.

Be sure to research your tour company thoroughly, paying particular attention to itineraries and testimonials. Prices, distances, and accommodation all vary, and no traveler wants to get locked into a situation that fails to live up to expectations.

Of course, many set their wheels to the tarmac without signing onto a supported tour. Cycling independently gives you complete control over where you go and how fast you travel.

Most visitors fly into Hanoi or Ho Chi Minh City. Starting off in the big city can be intimidating (and a bit dangerous), so busing it a few dozen miles up the road doesn’t hurt. Alternatively, domestic flights will quickly shuttle you to the middle of the country.

Cycling the entire highway is alluring, but time constraints mean you’ll likely opt for a shorter route. The scenic southern half is more popular, passing many points of interest. Spanning roughly 700 miles, it can be done in two weeks, though stretching it to three is recommended.

It’s also possible to skip segments by hopping a bus or train. A small fee will be levied for the bike, but the cost is negligible when time is of the essence.

Services and supplies are plentiful along Highway 1.

Services and supplies are plentiful along Highway 1. It’s always advisable to carry lots of water and some spare calories, but even the smallest of villages will have a vendor who can restock you.

Accommodation (tourist accommodation, that is) isn’t as frequent. In the south, there are some 70+ mile stretches between major centers, with longer ones in the north. Once you hit your stride, you shouldn’t have trouble knocking out these distances—just know your limits.

New bypasses and extensions are being added to Highway 1 all the time, which can either save you time or get you lost. Make sure to take along an updated map. Great Journeys sells some, or you can pick one up in Hanoi or Saigon.

Heat isn’t much of a problem on a bike because you create your own breeze as you move. Instead of temperature, consider the seasonal rains when choosing your dates. Summer can be quite damp, and you’ll need to keep abreast of typhoon warnings in the fall and early winter. Traveling on either end of the high season (November–March) translates to cheaper hotel rates.

Despite what you may hear about cycling in the developing world, there’s no need for a mountain bike on this ride (unless that’s your preference). The pavement is smooth, and on skinny tires you’ll really fly.

Packing your own tools and spares is a good idea. Bicycles and repair shops are ubiquitous in Vietnam, but mechanics won’t necessarily be equipped to work on your setup, especially if you’re sporting an unusual frame or high-end components. 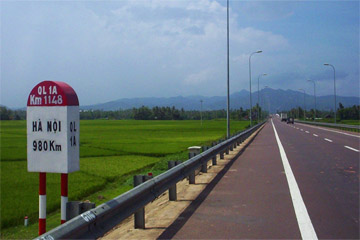 Cycling a main highway in Vietnam, where traffic rules are taken more as suggestions, might seem a perilous prospect. But remember that many locals get around by bicycle themselves, so the infrastructure is set up to accommodate two-wheeled travelers. Highway 1 provides generous shoulders, making it arguably safer than less-traveled roads that have none.

That said, traffic can be heavy. Keep in mind that the right of way is always yielded to the largest vehicle. Horns also take some getting used to—Vietnamese drivers use them liberally.

It never hurts to prepare for any trip, and there are tons of resources out there for this one. For general advice on cycle touring, consider these 8 steps.

The information you’ll be looking for as a cyclist might be hard to find in conventional travel guides, so why not go straight to the source—firsthand accounts? The website crazyguyonabike offers dozens of journals from the road, the best giving detailed route and mileage information.

Though outdated, Lonely Planet’s Cycling Vietnam, Laos & Cambodia includes information on the southern half of Highway 1, much of which is still relevant. The same can be said for Mr. Pumpy’s site, worth a read for entertainment value alone even if its details aren’t current.

A good book to take for the road is Catfish and Mandala, written by a Vietnamese-American who returned to his homeland to cycle the highway.

WHAT NOT TO MISS 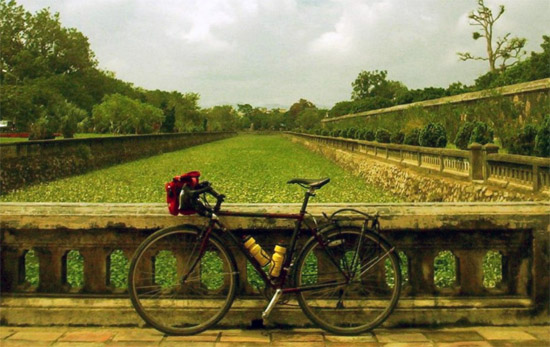 A few of the best destinations on or near Highway 1—don’t pass them by.

The 1,969 limestone crags punctuating Ha Long Bay are enchanting to say the least. Unfortunately, there may be 1,970 tour operators eagerly waiting to show them to you and take your dong. Get the lowdown from fellow travelers before booking a boat ride through this stunning locale.

The imperial city of Hué retains much of its grandeur, and its sights are easily accessible by bike. Tours of the old DMZ to the north can be arranged here, and the Hai Van Pass to the south is one of the most rewarding sections of Highway 1.

Nearby Hoi An is perhaps Vietnam’s most unique destination. Its history of international commerce lives on in many Chinese shop houses, and the narrow streets, colorful lanterns, and well-preserved architecture make for unmatched ambiance. The Cham ruins of My Son are less than 30 miles away.

Sandy beaches run along much of Vietnam’s coast, and touristy Nha Trang is home to a particularly pleasant one. It’s a nice spot to unwind for a few days, though some will find the city’s hyper-development trying. Many water activities are available here and elsewhere—if you fancy riding the waves, check out Surf Vietnam: China Beach and Beyond.

For a break from the balminess of the coastal plain, steer off Highway 1 and head to Dalat. The artistic vibe of this city is as refreshing as its highland climate. You have to earn it though, as both roads into town require substantial climbs.

Read about a different kind of Vietnam bicycle adventure in joshywashington’s article “On Surviving and cyclos in new Saigon.”

Matador Travelers Rob and travelLiz are among those who like to take to the saddle when they take to the road.

Tagged
Cycling Vietnam
What did you think of this story?
Meh
Good
Awesome

May 22, 2019 Eben Diskin
✖
travelstoke
Download the mobile app
stoked by