This is hardly the biggest misconception when it comes to foreigners visiting Japan, but I’m sorry to say it still exists. One can make the argument the samurai spirit, bushido, is still present in each and every Japanese walking around modern Tokyo, but no true samurai with a sword and topknot has existed for 150 years. The association has stuck so well a Japanese TV show was even able to prank a visiting athlete into being on his guard for samurai attacks:

This is as ridiculous as predicting Godzilla will emerge from the sea on Tuesday.

2. Many people treat foreigners like they’re from another planet.

Although things are slowly changing, Japan is and always has been a very ethnically homogenous country, with only 1-2% of foreign residents from countries outside Asia. Granted, Japanese in bigger cities like Tokyo and Osaka have more exposure to tourists, but there is still a strong sense of “us” and “them.”

Just ask Baye McNeil, a native of New York who started teaching English in Japan several years ago. Just like any other expat, he has had his ups and down with living abroad, but one consistency in his day-to-day life in Yokohama is finding that even during rush hour, in the midst of a very crowded train, the seat next to him tends to remain empty:

“People either spurned the empty seat or ignored it as if it were occupied. A cute little girl — all of four or five — spotted it, and made a blind dash for it. Her mother, almost violently, yanked her away just as she reached it, hissing, “abunai!” (dangerous). As mom dragged her away, the little girl glanced back at the seat, looking for the danger her mother perceived but she had not.”

Every time I hear someone in the US describe someone he spots on the street as “Japanese/Chinese… you know, one of them” I have to resist the urge not to sarcastically mistake him for a Greek or Russian. I suppose someone from Botswana has the same cultural heritage as one from Libya? There are certain elements of a shared history across Asia, but to say Japan is the same as Korea, China, or any other Asian country is laughable.

The spoken language in each of the three are distinct and very difficult to mistake for one another: Chinese is tonal, Japanese is typically more even tempered, and Korean comes with so many levels of formality it might make a Japanese blush. The urban designs and architecture are equally as unique: in certain places, Seoul looks like a scene out of Inception; Beijing is covered with so much smog it’s difficult to comment on the buildings; Tokyo may be an urban jungle, but it’s laid out with such regularity and kept remarkably clean.

4. Hiroshima and Nagasaki are not radioactive. 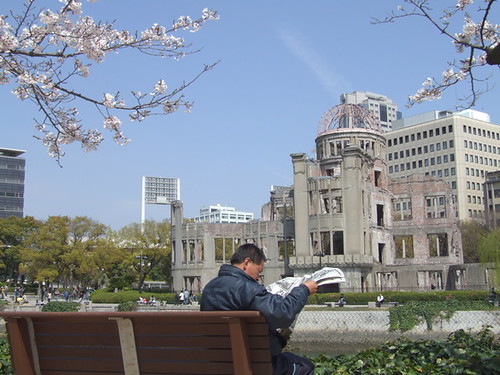 With President Obama visiting Hiroshima this month, I’m surprised to find there are still many people in the world who believe that Hiroshima and Nagasaki, like Chernobyl, continue to be uninhabitable areas covered in radioactivity (remember the scare over the Fukushima Nuclear Plant? Almost as absurd).

When a nuclear bomb explodes, there is a risk of those just outside the blast radius being exposed to lethal levels of radiation. However, that risk essentially disappears within a few weeks or months (if not days), because all of the fissionable material is “burned off” in the explosion.

Hiroshima is a thriving metropolis with over a million people, all of whom haven’t been concerned about being poisoned unless they were present in the city in 1945 (and some were).

5. Benihana is a joke over here.

One of the biggest culture shocks after leaving Japan and flying into any US city is immediately being faced with an arrogant douchebag who feels like blasting music on public transportation — this would NEVER happen in Japan (unless it’s an expat!) Although there is certainly some chatter on buses, planes, and trains, music is restricted to earphones, conversations are spoken at low volume, and there’s generally very little interaction. On the street — during the day, anyway — it’s not often you hear someone shouting or making himself the center of attention.

Tagged
Culture Guides Trip Planning Japan
What did you think of this story?
Meh
Good
Awesome

39 of the most breathtaking natural wonders in the world
For the perfect day of hiking and Colombian coffee, head to Jardín
I felt safer traveling to Aruba during the pandemic than I have in the United States in months
This tunnel under the Baltic Sea will be the longest immersed tunnel in the world
Woman finds guns, typewriter made of human teeth, and more behind locked door in Airbnb