BUENOS AIRES – One of the worlds great necropolises, La Recoleta Cemetery is the final resting place for thousands of affluent souls. The prestigious families of the city outdo one another for architecture and opulence, erecting impressive mausoleums to honor their dead.

Among the tombs, hundreds of statues hold court over this city of the dead. Angels, gods, saviors, cherubs, and mortals populate the cemetery with a second citizenry made of marble and bronze.

The entrance to Recoleta is through a wide neo-classical gate with thick Greek columns. Sun shimmers through trees onto thousands of tombs. The path branches and splits and suddenly the cemetery is a daunting labyrinth.

How should I orient myself? Looking this way and that, I saw her face. Eyes closed, wearing a simple white marble garment and wielding a sword, she leaned against a sunny tomb. I looked from her face and saw a dozen more figures surrounding me.

I raised my camera and clicked. This is how I would explore Recoleta, one face at a time. 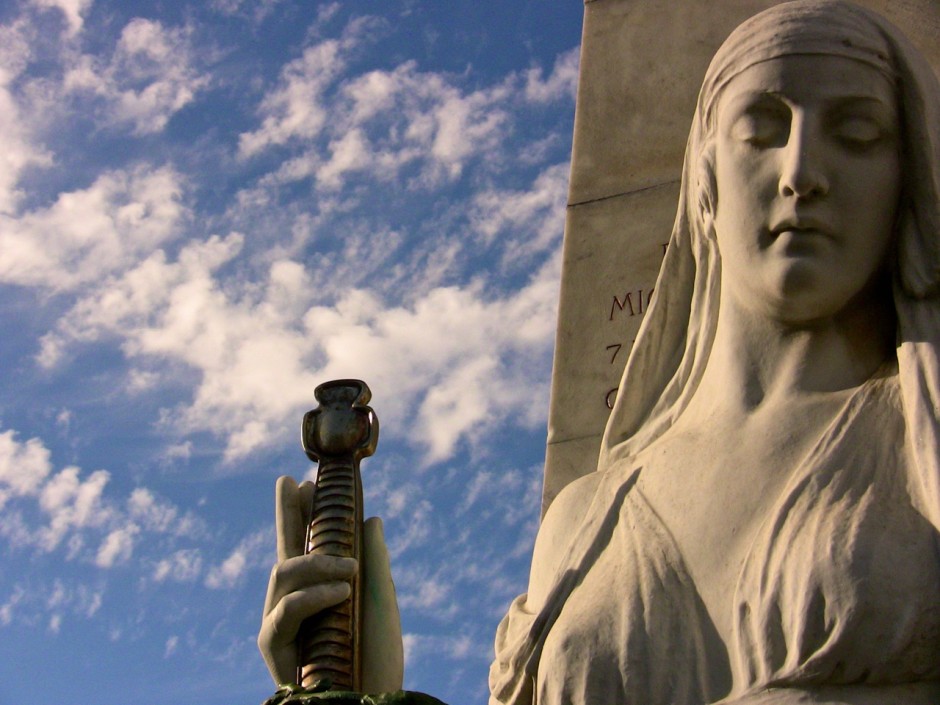 At the great gates of Recoleta, a sword-bearing woman with mysterious downcast eyes greets the visitor. The archtypes of death surround me; weeping maidens, triumphant saviors, and winged angels, all here to guard and populate this small city for the dead. 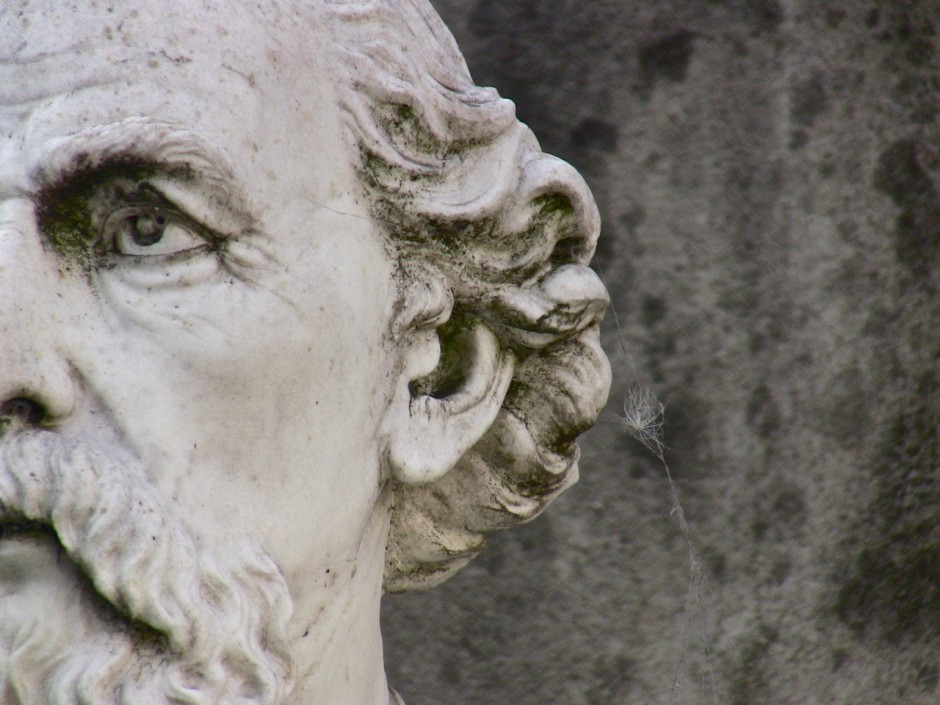 In 1871, as yellow fever ravaged the city, the richest, most influential families gathered their dead in Recoleta. Their faces are preserved here; young, old, stern, and wistful. I look around and see other visitors leaning in close to the stone faces, tracing the cold edges with their finger tips. 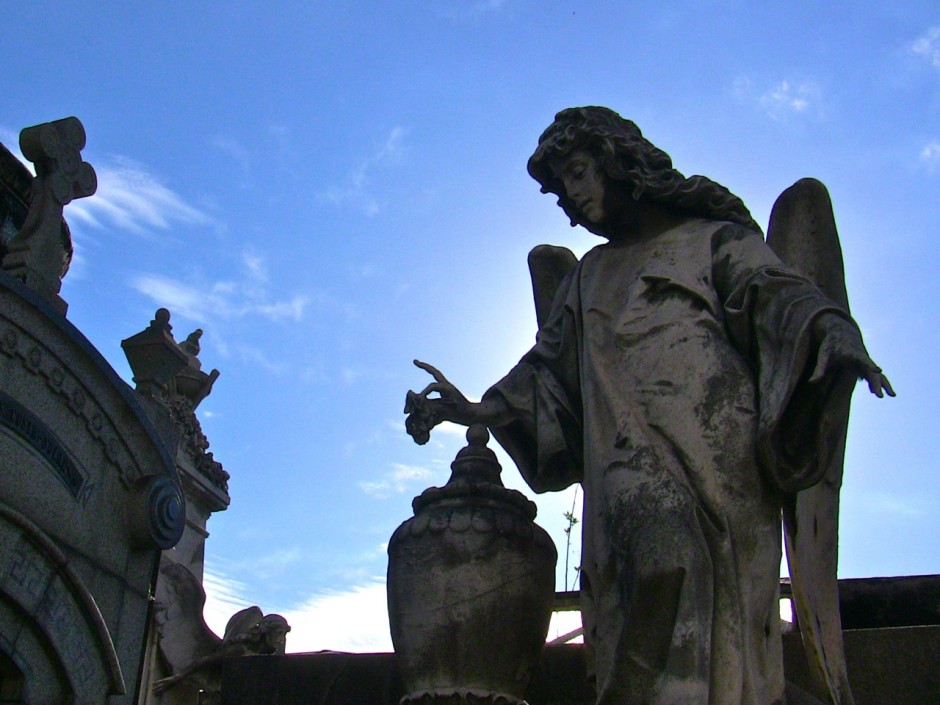 The heavenly hosts are well represented in Recoleta. Hundreds of cherubs, angels, and demi gods stand silent watch. Some seem to be comforting the afflicted, others are caught in a moment of flight. 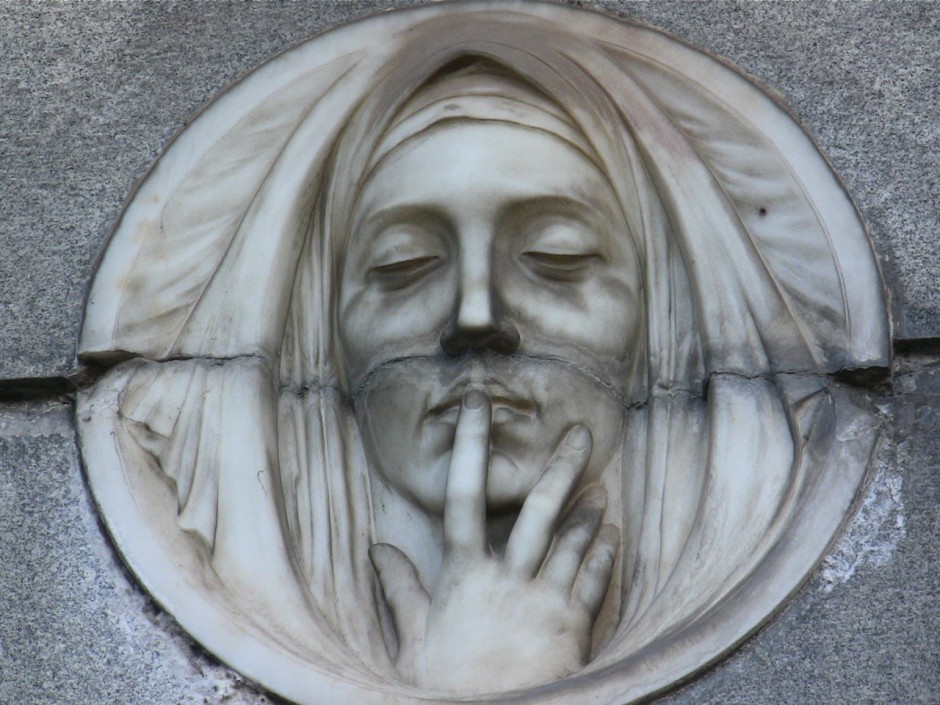 The smooth lines of the marble give this face an uncanny realism. Like so many of the women represented in Recoleta, she wears a face of peaceful sorrow. 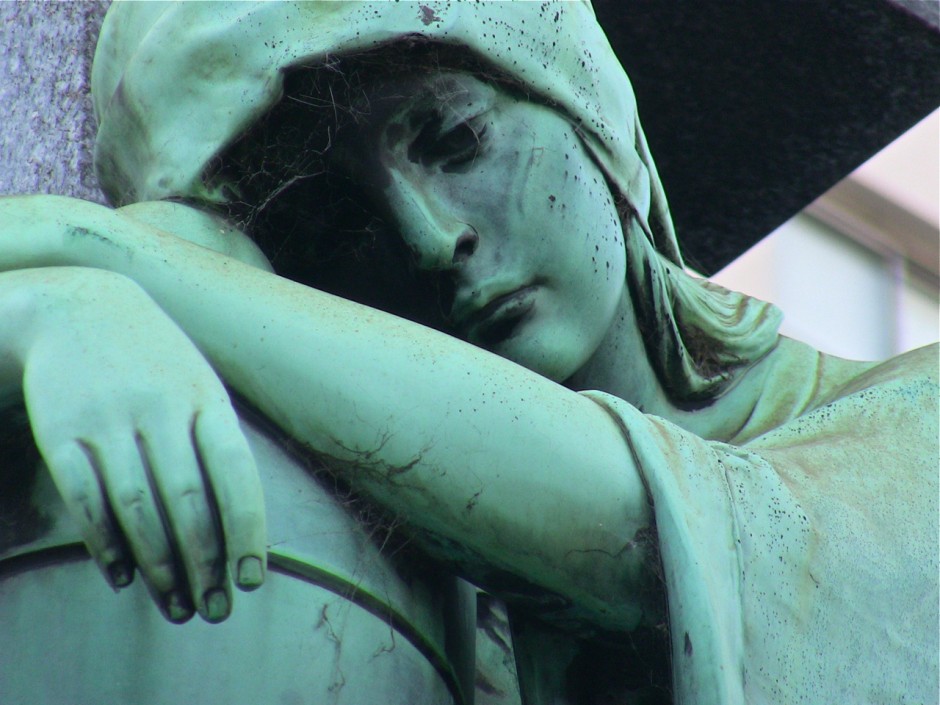 Recoleta is a good place to sit down and rest. The wide, tree skirted lanes that branch into a maze of mausoleums provide space to sit for a moment or two. Opposite me this copper woman closes her eyes and lays her head on a tomb. So many emotions are expressed through the statuary that the visitor can glance at sorrow then move to hope, fear, fatigue, and peace in a matter of a few paces. 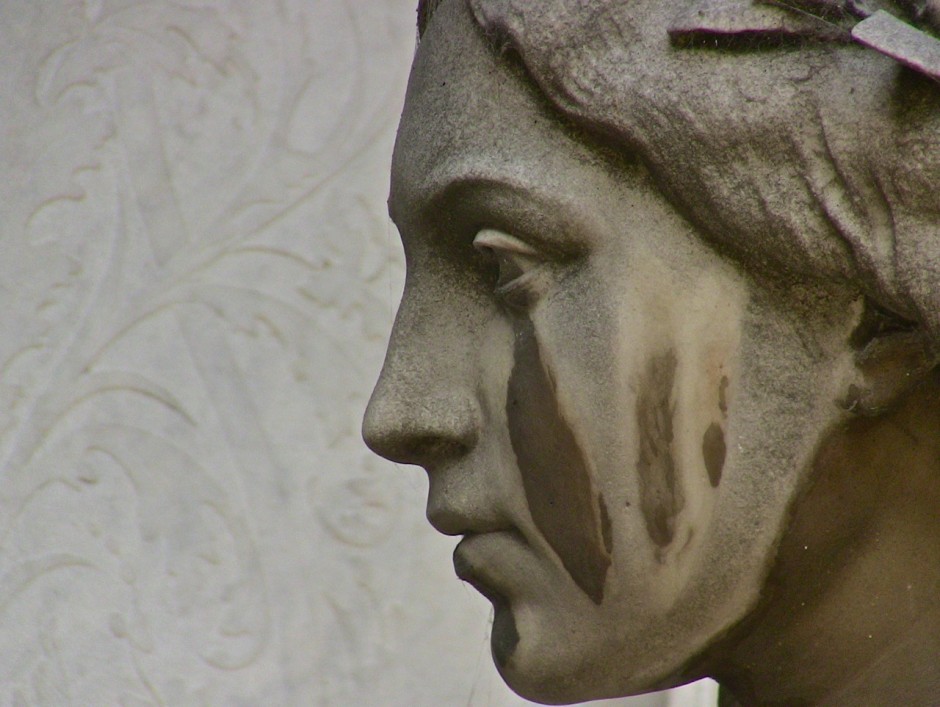 Detail of a woman's face

The closer my lens got to the face the more convincing it was. If she would have turned to me and begged my pardon half of me would not have been at all surprised. 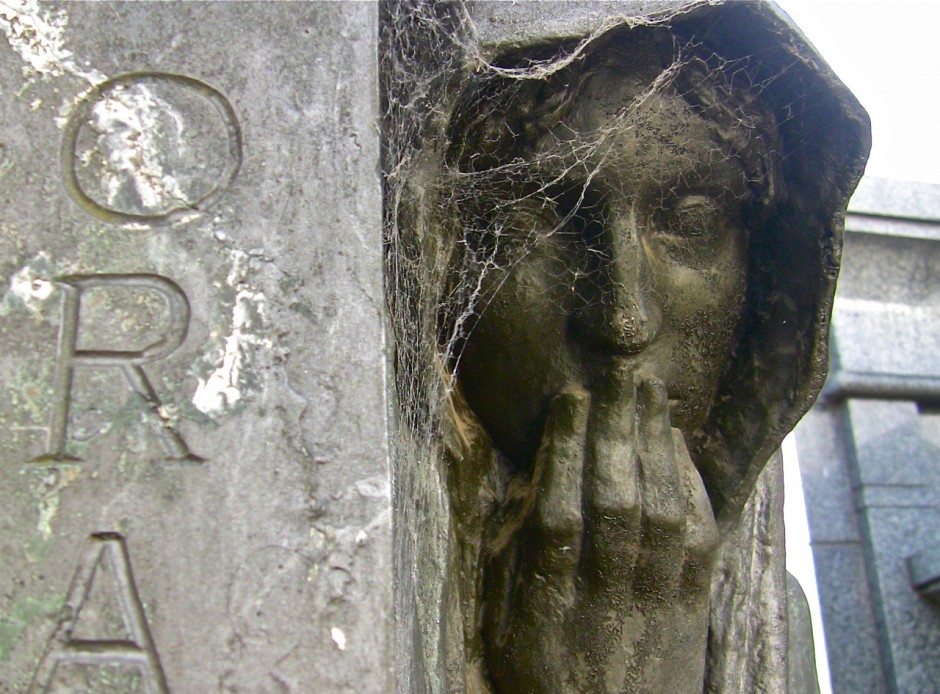 This mausoleum is surrounded by grieving, horror-faced women. The cobwebs and the cheerless gray of the stone lend to the forlorn facade. 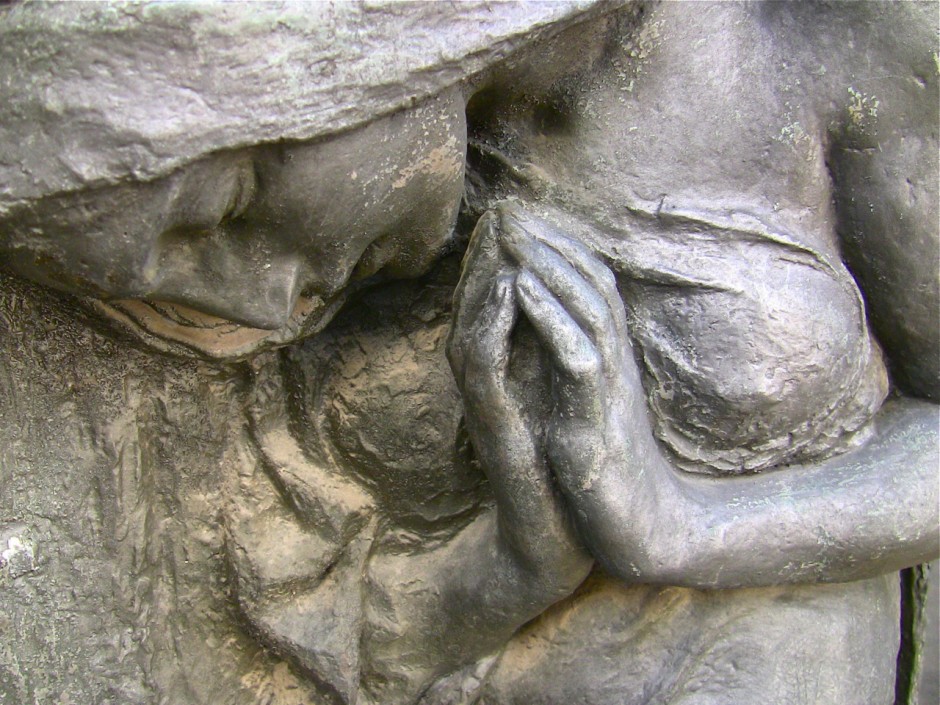 While many of the graves exude a stately exuberance, others radiate the sorrow of those left behind. This tomb was a scene of unhappy supplication to sorrow. 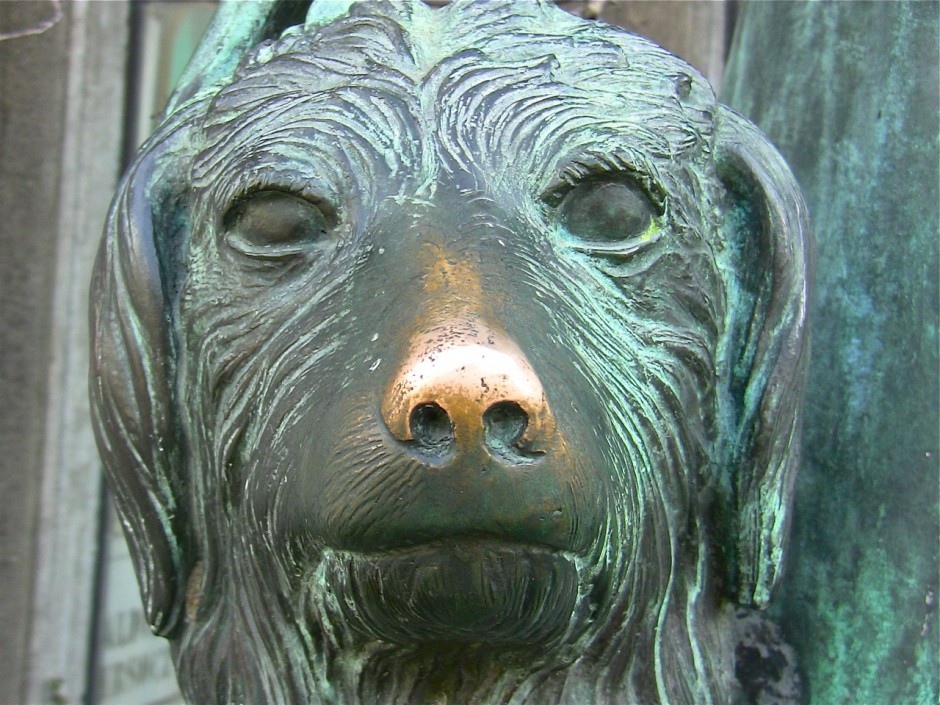 His name is Sabu, and when he died his likeness was added to the tomb of his master, Liliana Crociati de Szaszak. Liliana died at age 26 in an avalanche. 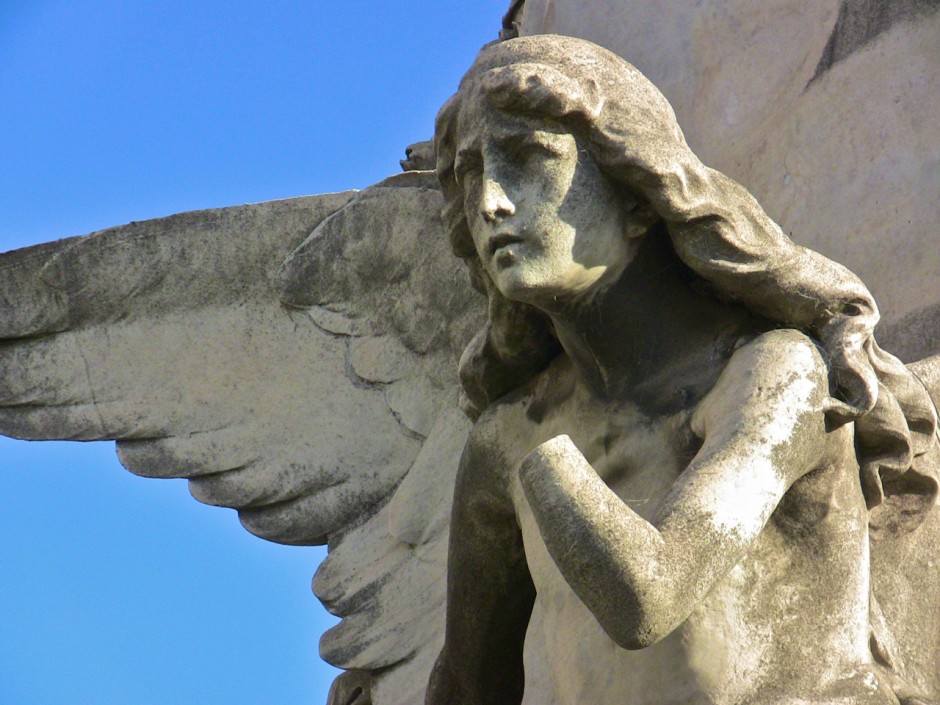 The city-like cemetery has fallen into pockets of disrepair. This only heightens the beauty and austerity and the solemn spookiness of it all. It also means that the cemetery will continue to crumble. It was last remodeled in 1881. 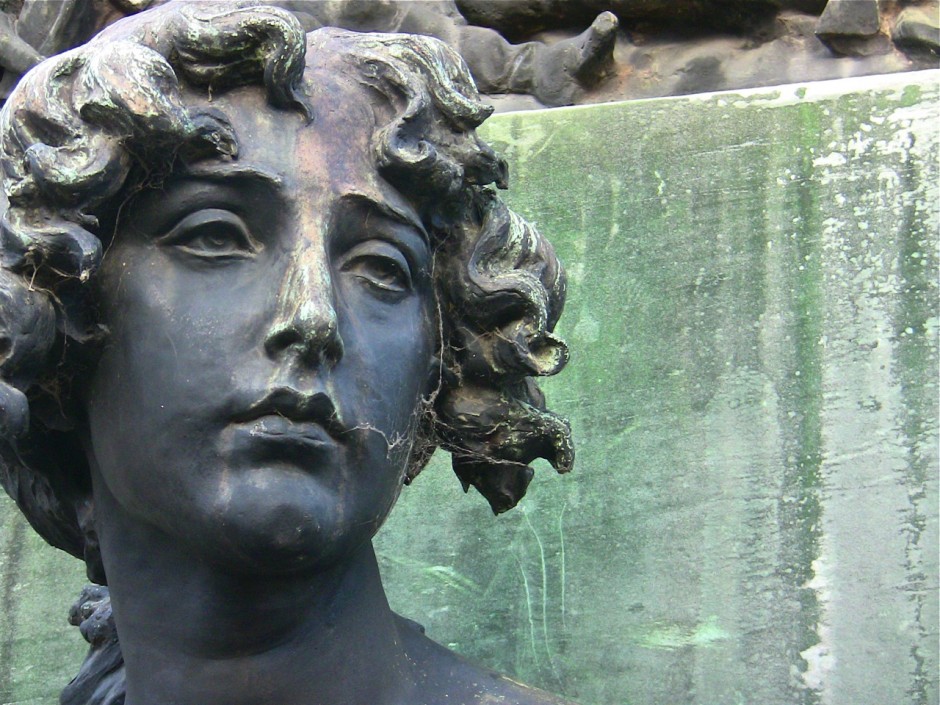 How old was she when she died? Younger than me no doubt. Did she succumb to yellow fever? I can wonder all day but her bronze lips will never part to tell me. 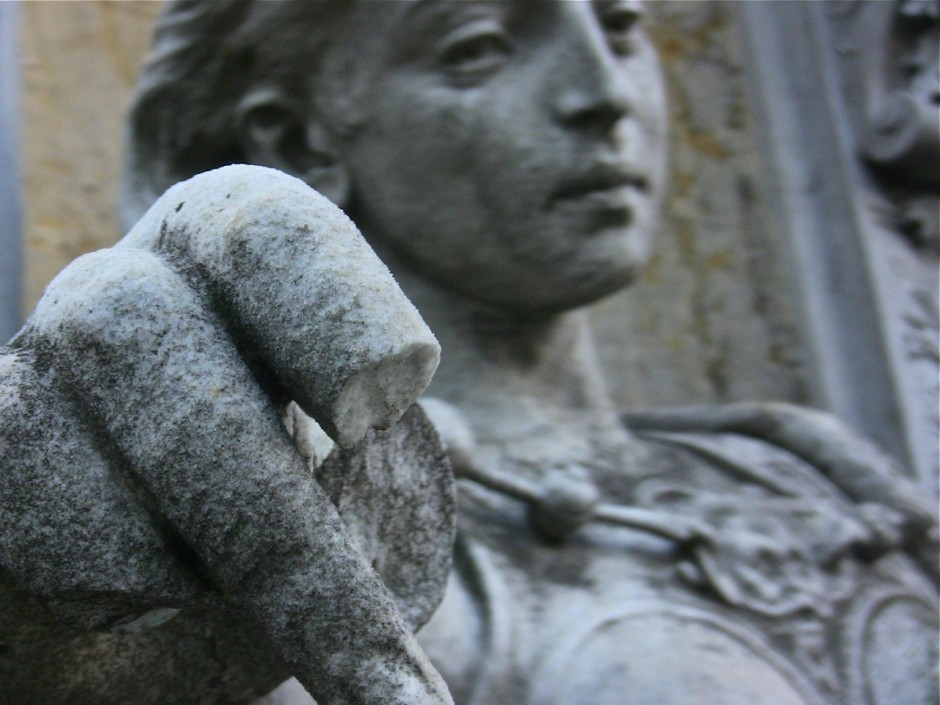 I round a corner and notice that the security guards are starting to herd tourists out of the cemetery. There are over 4,000 tombs in Recoleta; if I can stay hidden I can avoid the guards for several more moments to take a few more pictures. 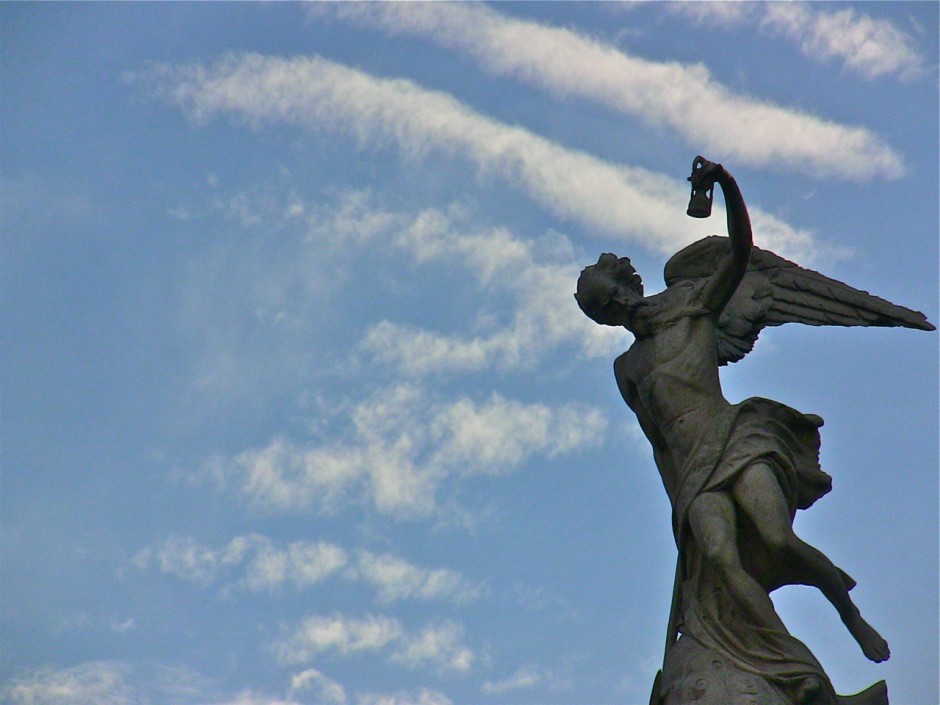 Angels in flight top many tombs but this is no angel. This is Chronos. The embodiment of time, he eyes his hourglass reminding us all that our earthly tenure is but a brief moment, a grain of sand. 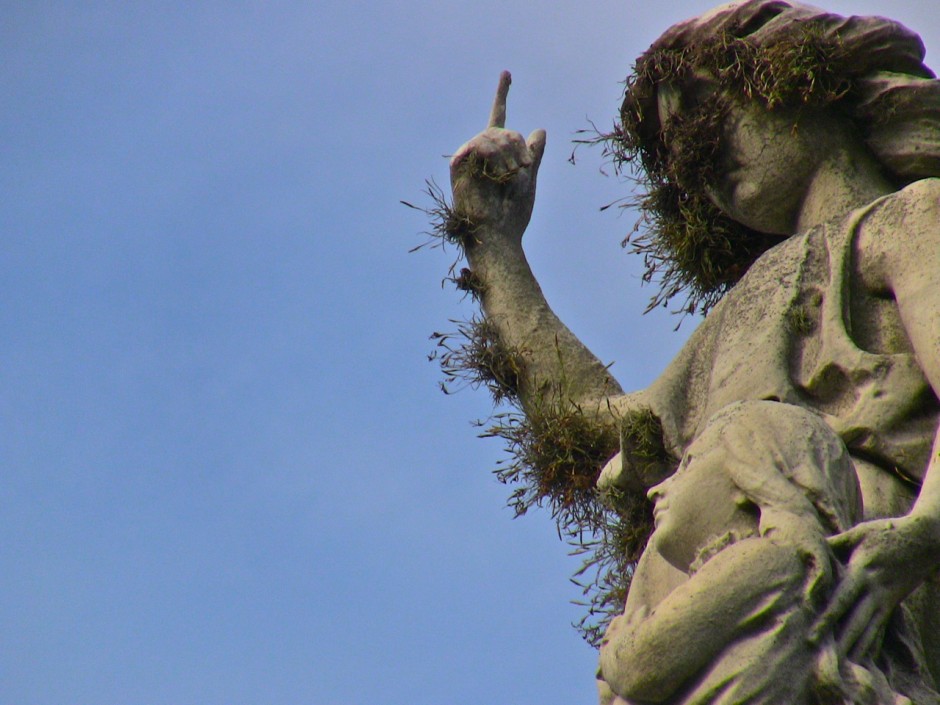 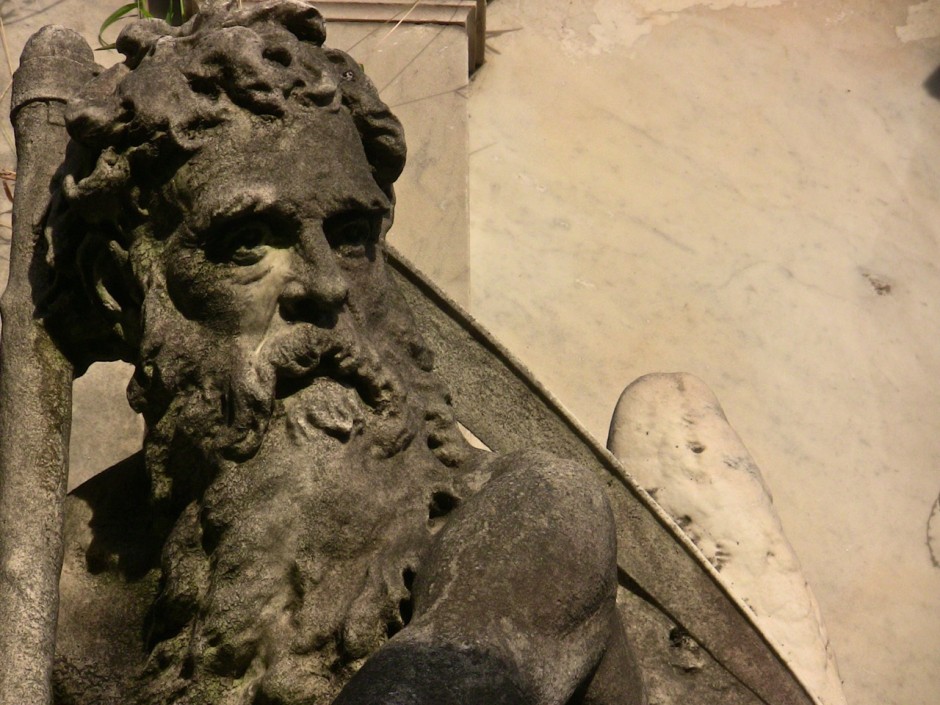 The last photo I took in Recoleta was this image of Death. He faces the golden light of the late afternoon with his scythe resting on his shoulder. What is that look on his face? Is it contentment? Is it understanding? I won't know - a portly security guard has spotted me and is ushering me through to the exit.