View all travel news
Top Countries
Top CitiesView All Destinations
Trending Regions
Trending Cities
Load More
Megan Hill shares 5 of her favorite places to get outside on those rare sunny days in Seattle. 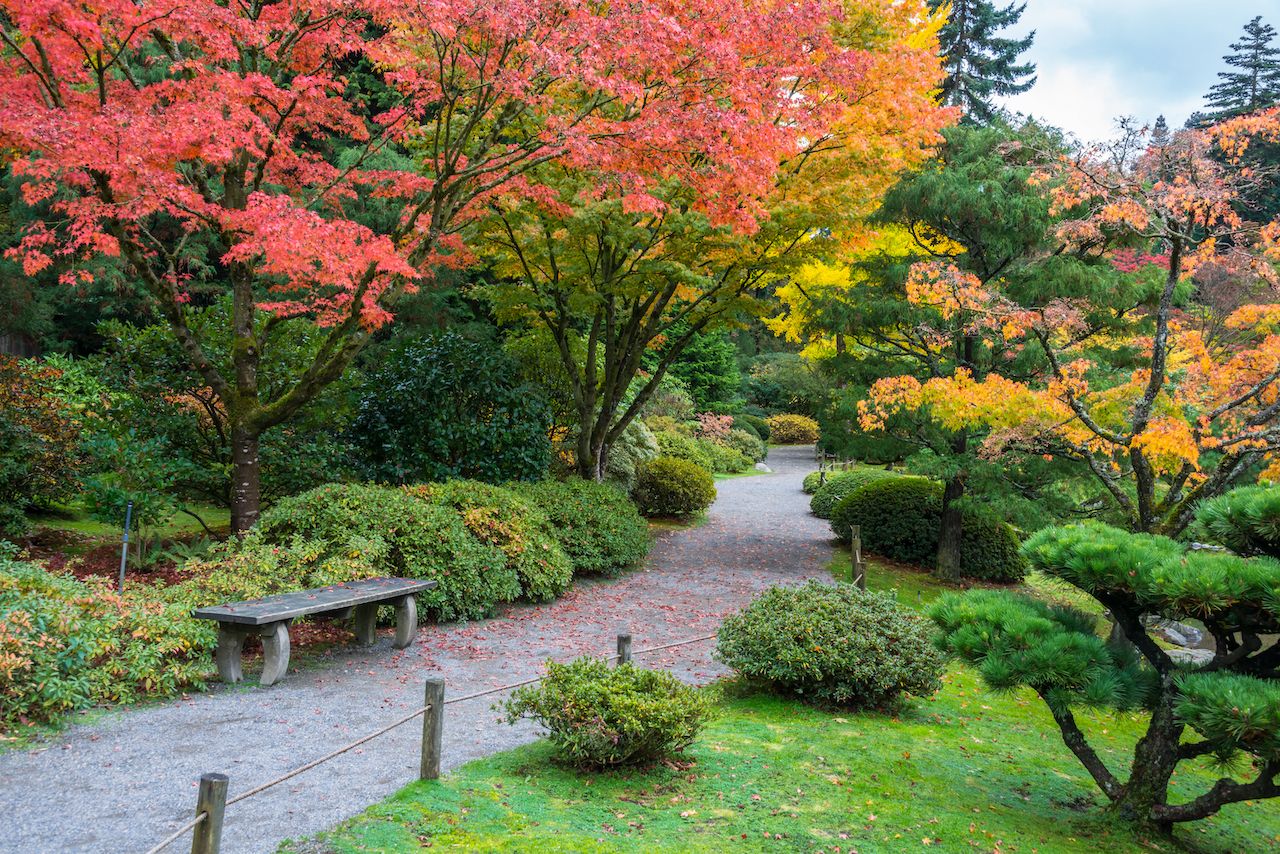 This park is expansive, covering 230 acres northeast of Downtown, so my favorite way to take it in is to combine cycling and walking. I love speeding down the Arboretum’s green hills and hiking the trails at the park’s northern end, which snake through forests and marshy islands.

There are a few hidden swimming and picnicking spots, but I also like having a snack while watching the kayakers on Lake Washington paddling through the lilypads around the I-5 overpasses.

Getting there: Rent a bike at Recycled Cycles, head across the Montlake Bridge and through the parking lot of the Museum of History and Industry. A trailhead starts here, but you’ll have to walk your bike through the marsh trails.

Avoid biking on Arboretum Drive, as you’ll snarl traffic and piss off a lot of drivers. Instead, there are paved roads throughout the park that are closed to vehicles. 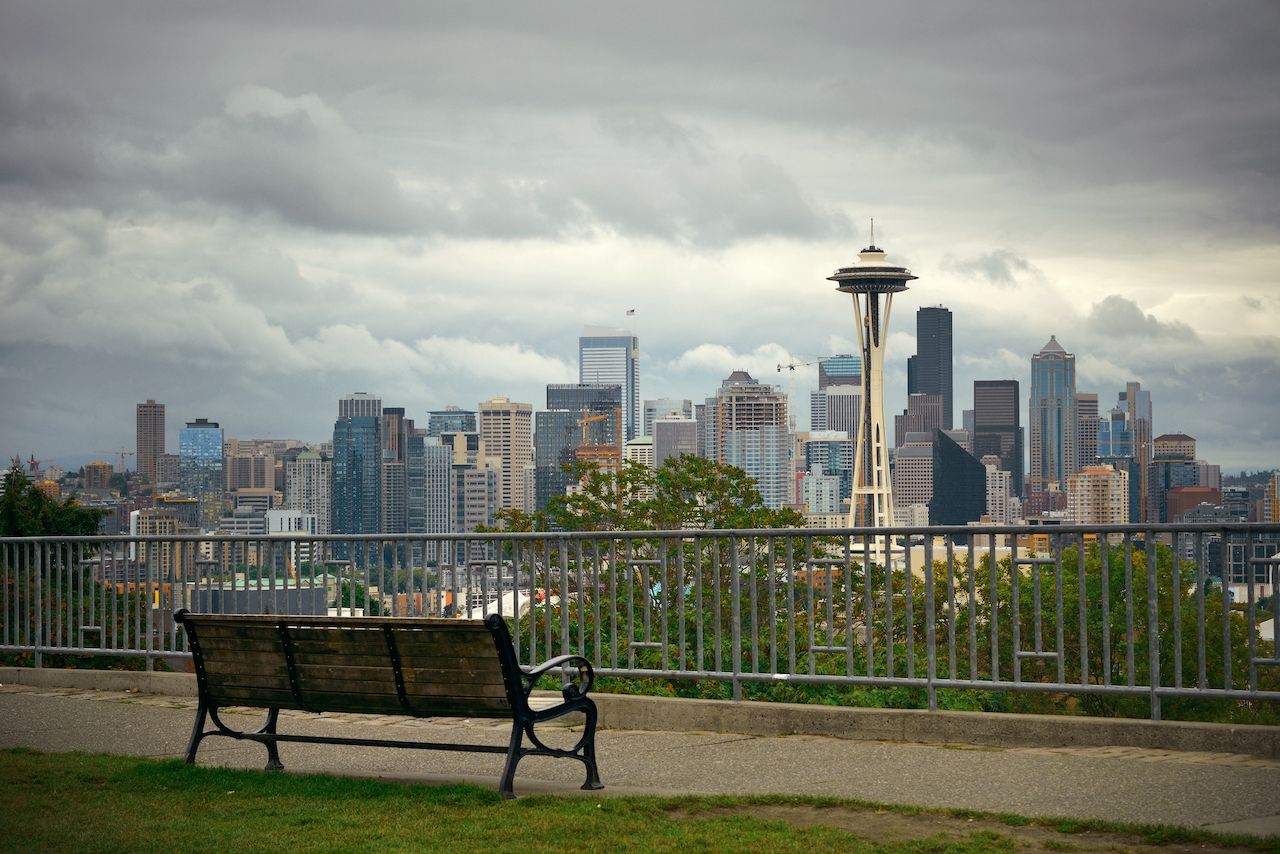 It seems like every postcard of Seattle’s Space Needle is photographed from Kerry Park, atop posh Queen Anne Hill north of Downtown.

Maybe it’s a little clichéd, then, to send you here, but I don’t care; Kerry Park is easily my favorite spot in Seattle. On a clear night at sunset, Mount Rainier turns pink and purple behind a brightly lit Needle.

Getting there: This area gets pretty crowded on nights when views are best, so while you can park your car with some effort in the neighborhood (drive up the ridiculously steep Queen Anne Ave. N from Downtown and take a left on Highland Drive) it’s also convenient to grab a bus (the numbers 2 and 13 pass Highland on Queen Anne). 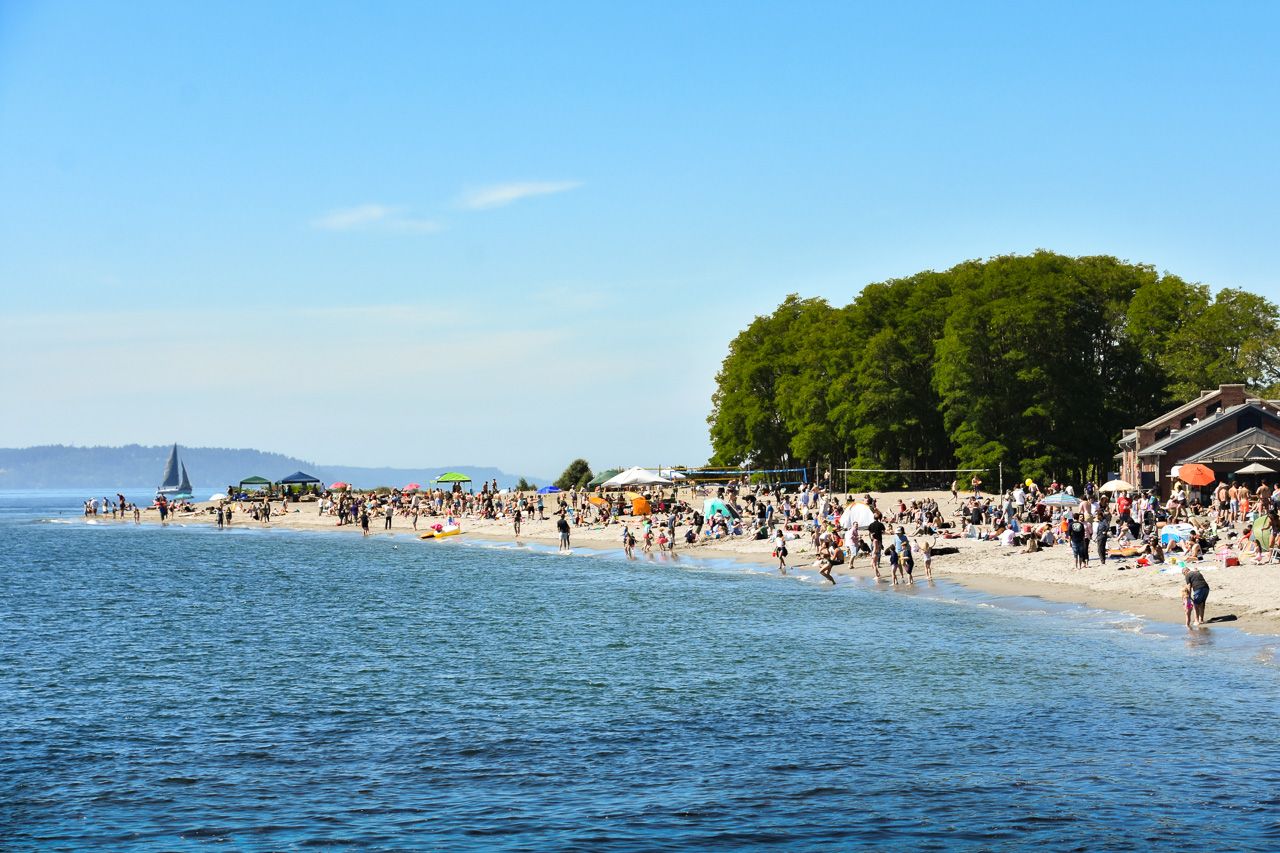 It’s hard to choose between Kerry Park and Golden Gardens at sunset. From this beach’s vantage point northwest of Downtown, there’s a view of the Olympic Mountains silhouetted by the setting sun.

It’s often impossible to park here on summer evenings, but if you go out early you’ll probably get a spot, and maybe even a fire pit. There are also public bathrooms here, but they tend to get a little gross with all the sandy, wet feet that traipse through.

Getting there: My favorite way to get to Golden Gardens is by bicycle. If you rent from Recycled Cycles (above), you can follow the flat, scenic Burke-Gillman Trail all the way to the park. 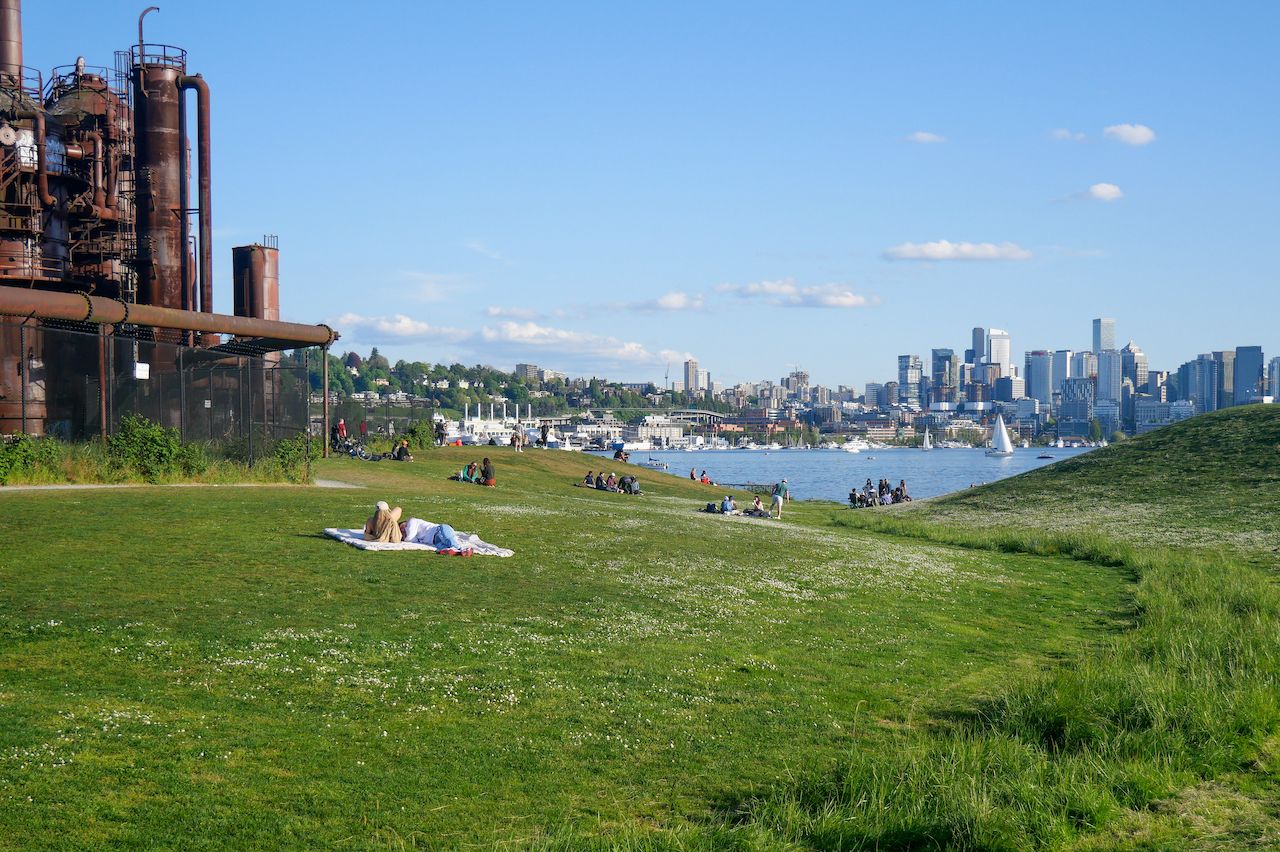 Gas Works’ big hill is popular with kite fliers and is also home to a weird landmark: a former gas plant now partially turned into a picnic area and children’s play barn.

The park sits on a thumb of a peninsula on Lake Union north of Downtown, which makes it my favorite place to watch a regatta — and enjoy yet another awesome view of the skyline.

Getting there: Gas Works has a fairly large parking lot, but it’s also easy to bike to because it’s right on the Burke-Gillman. 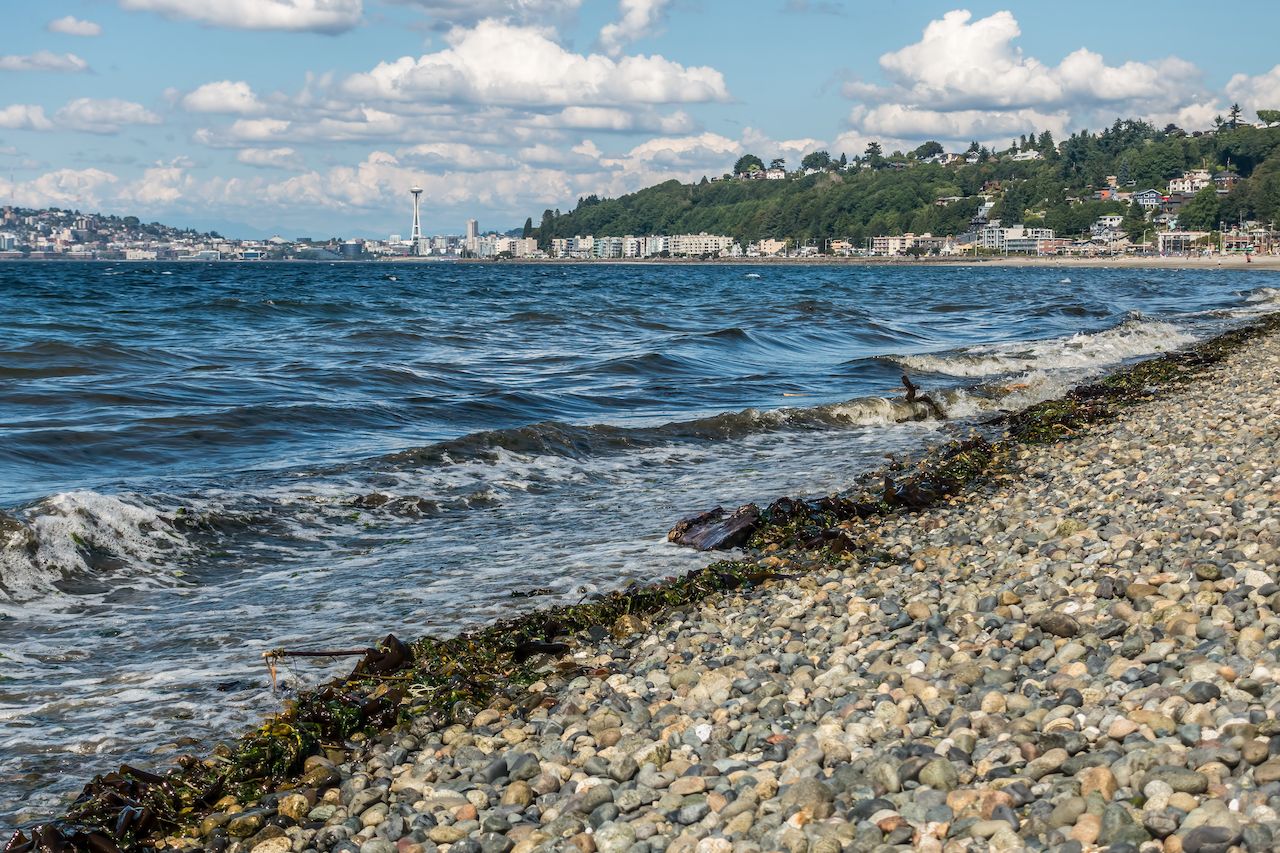 The strip of beach separating the high-rise condos and charming bungalows from the water in West Seattle is often compared to a California beach town. This is only true, of course, if it’s not raining. But when the sun is shining, the beach is full of volleyball players and kids eating ice cream.

My favorite way to spend a day on Alki is to cycle the long bike path from the ferry landing to the Alki Point Lighthouse, enjoying the salty breeze, views of the islands, and the city’s skyline.

There is a long strip of restaurants (lots of fish and chips, coffee, and ice cream) facing the water, so don’t worry about bringing a picnic.

Getting there: It’s also hard to park at Alki, especially on summer weekends. There are absolutely no spaces available unless you’re a resident with a driveway.

During the summer, though, the city operates a Water Taxi from Downtown to West Seattle, which allows cyclists to bring their bikes on board. And hey, you get to throw in a boat ride to your day at the park.

Read about 10 Cities with the Biggest Parks in the World.

The 9 Best Hikes Within One Hour of Seattle