The first thing you need to know is that if you’re doing it right, it’s called a “feed.” Don’t expect claw crackers, scissors, picks, or bibs. This is not a white linen affair.

“This is gonna get messy,” says Roads to Sea Guided Tours owner Anna-Marie Weir as she spreads a waterproof tarp over the tabletop and secures it with the end of a stray 2×4. Her tone is playful, but there’s something about this setup that feels a little like Dexter’s kill room. It doesn’t help that we’re getting ready to feast in a barn that was built in the 1800s, and the enormous, rusty blade from some ancient thresher hangs directly over the seat at the head of the table.

As I pull up my chair, she opens a cooler and retrieves a crimson lobster which she turns over in her hands. Satisfied, she puts it on the plate at the far end of the table, where Heather (the Tourism New Brunswick rep and our third for dinner) is seated. To my untrained eye, the next lobster out of the box looks identical to the first, but Anna-Marie disagrees. “This one’s the female,” she says, handing it to me belly-up as though that will explain everything. She places a third lobster on her plate and pushes up her sleeves.

“Now first of all, when we eat lobster, we eat lobster. None of these sides and sauces … Maybe if you’re lucky you’ll get a roll,” she laughs. To my left, Heather nods vigorously.

“You can remove these,” Anna-Marie says, pulling the elastic bands off the claws. “The danger has passed,” Heather adds drily.

“Now every part of the lobster has meat in it, it’s just that some of it’s harder to get to. Do you see how every joint is articulated?” I turn my attention from my lobster to see Anna-Marie’s waving at me from the palm of her hand. “Always push against that.” She places her lobster on its belly and levers her thumb into its shoulder. She presses down and the front arm, claw and all, lays severed on her plate.

“Wouldn’t be a feed without some blood.”

Lobster dismemberment is surprisingly easy, and in seconds I’ve made a tower of legs piled like pickup sticks. “We’ll eat these first and get it over with,” Anna-Marie says, and proceeds to break the legs down further — joint by joint — and suck the meat out of each segment. It reminds me of Pixy Stix, except instead of powdery sugar these are filled with meat.

“Do the same with the elbows,” Anna-Marie says, expertly cracking a larger joint in two. Under the pressure from my thumb, the entire arm goes skittering off the table. Anna-Marie picks it up. “Ten second rule.”

I try again, but the shell is thicker here, and covered in spikes. “Wouldn’t be a feed without some blood,” Anna-Marie shrugs, picking up a claw. She removes the ‘thumbs’ and says, “You got your crusher, and you got your pincer. These are your tools.”

I discover that the slender pincer is easily as useful as a seafood pick in extracting the meat from the shell casings.

Anna-Marie pushes her chair back and stands up. She’s got the fat end of her claw, which she places on a paper towel on the barn floorboard. She squats, raises her fist, and smashes it down, cracking the shell at its most impossible point. “Now you try it.” I hunker down and hit the thing so hard the claw caves in and sends lobster meat up the front of my sweater. Anna-Marie hoots and Heather stands for a round of applause.

The inside of a lobster claw looks just like the outside: mottled reds and oranges in a perfect claw shape. Unlike the tail flesh many of us are familiar with, this part has a grainy, slightly liver-like texture. Extremities thus dispensed with, I lean back and survey the scene.

Our communal shell bowl is piled high in the middle of the table like some macabre centrepiece. My wine glass is smeared rim to stem, and a river of yellowish liquid is pooled on the tarp in front of me. The front of my sweater is dotted with flecks of lobster flesh, and my jeans are wet where I was kneeling. On my plate, there are remains: everyone’s favourite part — the tail — and attached to it, a beady-eyed, tendril-covered brain casing.

“Hold it like you’ve got both ends of a towel and give it a twist.” The head comes off easily, and a grey-green sludge spills out over my hands. “It’s edible if you want it,” Anna-Marie says, but I set it aside for the bisque.

Anna-Marie fans out the tail fins, then tears them off one by one and demonstrates how to coax the meat out using your teeth. It’s like eating an artichoke.

I take a bite of the caviar, and am neither horrified nor delighted.

Using the diminishing dry patch on my forearms, I push my sleeves up higher and hover expectantly over the tail. Following Anna-Marie’s lead, I break the back and then hook my fingers under the casing and tease out the tail flesh. After clearing away what Anna-Marie delicately calls “the poop chute,” I tear back the top layer of flesh to reveal that little extra that my lobster has: an egg sac.

It’s waxy and red, a thin tubular organ, unmissable against the white tail flesh. I take a bite of the caviar, and am neither horrified nor delighted, except for the pleasure I take in knowing I’ve done ‘er up right.

Where to buy lobster on New Brunswick’s Acadian Coastal Drive 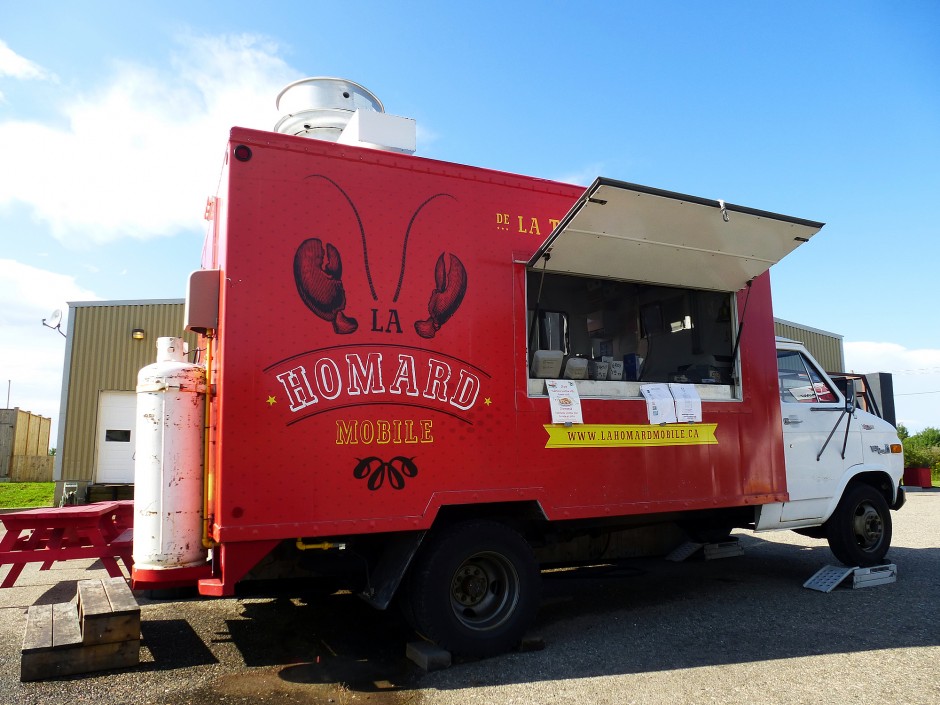 This post is proudly produced in partnership with Destination Canada.
Tagged
Food + Drink Insider Guides New Brunswick, Canada
What did you think of this story?
Meh
Good
Awesome
✖
travelstoke
Download the mobile app
stoked by