If you only go to southern Thailand for the beaches, well, you’re missing out.

SOMEWHERE BETWEEN THE THICK, smoggy excitement of Bangkok and the extravagant white-sand brilliance of the Andaman Coast hide the remnants of one of the world’s oldest rainforests.

Nestled within a mountainous region in the southwest of Surat Thani province, Khao Sok’s jungle ecosystem formed as early as 160 million (yes, million!) years ago.

Combining characteristics of both rainforests and tropical evergreen forests, this truly ancient landscape overflows with misty limestone cliffs, waterfalls, and the cries of rare animals.

Khao Sok connects with a handful of other parks and wildlife reserves to total 3,000 square kilometers of protected wilderness.

Khao Sok is home to an incredible diversity of plant and animal species.

Interestingly, it was communist insurgents who helped ensure this preservation.

In the 1970s, they set up camp amid the dense jungle and imposing karts of Khao Sok, and in the process of fighting off the Thai Army they also kept out loggers and miners eager to make off with the area’s natural resources.

Conservation unfortunately gave way to modern necessity in 1982 with the construction of the Ratchaprapha Dam. The resultant Chao Lan Reservoir, spanning 165 square kilometers to the north of the park, is now a huge tourism draw, but much of the native wildlife was less than thrilled about it.

Attempts were made to capture and relocate animals in the area, without much success; 52 of the river’s fish species were lost. 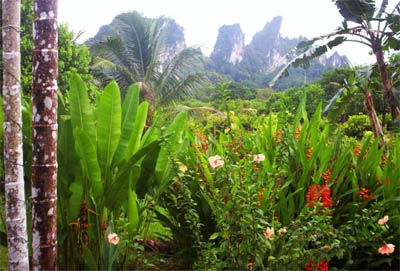 Khao Sok lies off Highway 401, 120 km west of the town of Surat Thani and just 60 km from Takua Pa on the northern Andaman Coast.

From the highway (km 109), a short road winds down to the actual park entrance where admission fees are collected.

It’s along this stretch that you’ll find most of the guesthouses, with the thickest cluster surrounding the bridge over the Sok River. Additional options are sprinkled here and there down other nearby highway turnoffs.

Tigers and bears and…flowers? Oh my!

Left undisturbed by natural and, to some extent, human forces for millions of years, Khao Sok is home to an incredible diversity of plant and animal species.

Elephants, tigers, barking deer, sun bears, and cobras are just a few. Pythons as thick as your thigh have been spotted in the deep jungle.

While you’re certain to see some spectacular wildlife during your stay, keep in mind that most animals stay well away from established trails, and many are nocturnal. Birders will likely have better luck.

But Khao Sok’s most famous resident is much less elusive. Flowers of the genus Rafflesia are the largest in the world and are found in only a scattering of locations around Southeast Asia.

Perched atop some of the park’s high ridges are groupings of one Rafflesia species. They bloom from November to March, giving off an odor of rotting meat to attract flies for pollination. One week after they open, they die.

These flowers are extremely rare and sensitive to disturbance. Remember to keep your distance, no matter how badly you want to get that perfect macro shot. 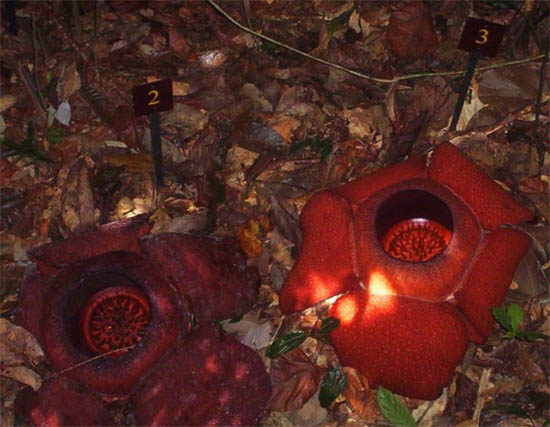 Hiking, whether to see the flowers or simply to take in the diverse sights of the jungle, is a rewarding experience in Khao Sok. The mountainous terrain offers routes of varying lengths and difficulties.

For a true lounging experience, rent a tube and let the river current do its thing.

If you prefer to do your trekking on the back of an elephant, that can also be arranged.

The porous limestone underlying the forest gives shape to some impressive caves. Depending on water levels, it’s possible to either walk or swim through some of them.

However, this can be dangerous: in October of 2007, six tourists and their two guides died in a cave during a flash flood. Make sure you have proper gear and that your guides know their stuff.

River tours are another popular activity. Guided kayak, canoe, and raft trips aren’t terribly exhilarating, but you’re sure to spy plenty of mangrove snakes and baby pythons hanging in the branches canopied above you. There’s always a place to take a refreshing dip, as well.

For a true lounging experience, rent a tube and let the river current do its thing. Just don’t try this when the water is low, or you’ll wind up stumbling through ankle-deep pools on foot. 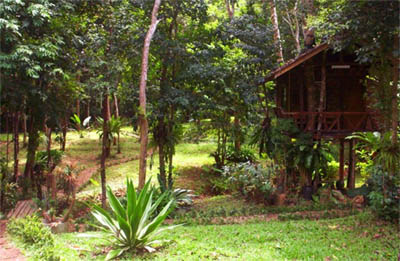 Various boating excursions are available on the reservoir, where the karst cliffs spike out of the water like knife blades and your chances of seeing wildlife are slightly higher.

The park operates three clusters of floating guesthouses on remote sections of the lake, accessible by motorboat.

Most of these activities require a guide. This goes for hiking as well, as many of the longer trails are unmarked and getting lost would be very bad news indeed.

Numerous operators offer tours, ranging from afternoon outings to multi-day, all-inclusive packages that provide transport from Phuket, Krabi, etc. and allow you to partake of everything listed above.

There are two alternatives when arranging a tour. Your first is to book through one of the big-name companies, either online or at a tourist center on the west coast. Some popular names include Limestone Lake Rainforest Tours, Siam Inter Tour, and, with a focus on canoe/kayak tours, PaddleAsia and Sea Canoe Thailand.

Otherwise, simply book through your guesthouse once you get to the park. Art’s Riverview Lodge and Our Jungle House are used by tour groups and therefore see lot of traffic, but they get mixed reviews.

Better for the independent traveler are any of the places along the road just before the main park entrance, such as Khao Sok Tree House Resort. Each should have similar tour opportunities on tap, as well as an onsite restaurant. Even if yours does meals, Thai Herb Restaurant by the river bridge deserves a visit. 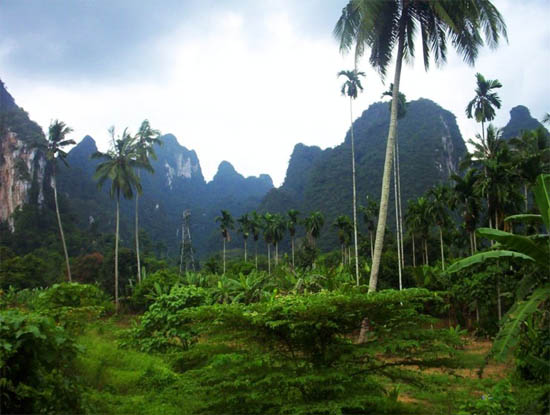 Khao Sok is the wettest place in the whole country, its berth in the Phuket Mountains square in the sights of both the Indian and Pacific monsoons.

Your best bet for sunny skies is between December and April, though there will still be sporadic showers most days.

Expect your fair share of run-ins with six- and eight-legged creatures. Just remember to keep it in perspective: those huge spiders chilling in your guesthouse bathroom and that leach clamped onto your ankle (don’t freak out, they’re harmless!) are simply testaments to the rainforest’s explosion of life.

Khao Sok is the perfect stopover between Bangkok and the Andaman Coast, and buses and minivans travel direct to the park from both Surat Thani and Phuket.

Public buses connect these two locales as well, and you can arrange for the driver to drop you at the turnoff for the park on Highway 401. This will give you more freedom to survey and choose from the many guesthouses.

Many Matador members are in Southeast Asia right now!

The intrepid Noellejt wrote some beautiful blogs about her time at the best little cooking school in Thailand.

Voralak is a writer based in Bangkok who wrote about the islands of Trang in southern Thailand in an earlier guide for Matador Trips. Dane, another Bangkok based writer, recently wrote a great article about the luxury of time for Brave New Traveler.

Compash is the founder of a permaculture farm and natural building center near Chiang Mai. Nora Dunn is traveling in Thailand and Malaysia…

The 20 best hiking beers, according to 11 brewers
The best Maldives experiences that combine luxury and wildlife
How to do your very own ‘Night on Earth’ nighttime safari experience
Biscayne National Park is the perfect day trip from Miami
California’s four least-visited national parks are some of the raddest places in the US. Here’s why.

How to see Chile’s otherworldly Atacama Desert, the driest place on Earth

National forests are trending for summer travel, and we’re here for it