Viewing (and photographing) wildlife around the Galápagos is next level, as you’ll see below.

We got the following images touring Eden Island, Chinese Hat, Bartolomé Island, and Genovesa Island on the La Pinta yacht. Special thanks to Metropolitan Touring and the Finch Bay Hotel on Santa Cruz Island, from where we took a day-tour to South Plaza.

All photos by Coen Wubbles. 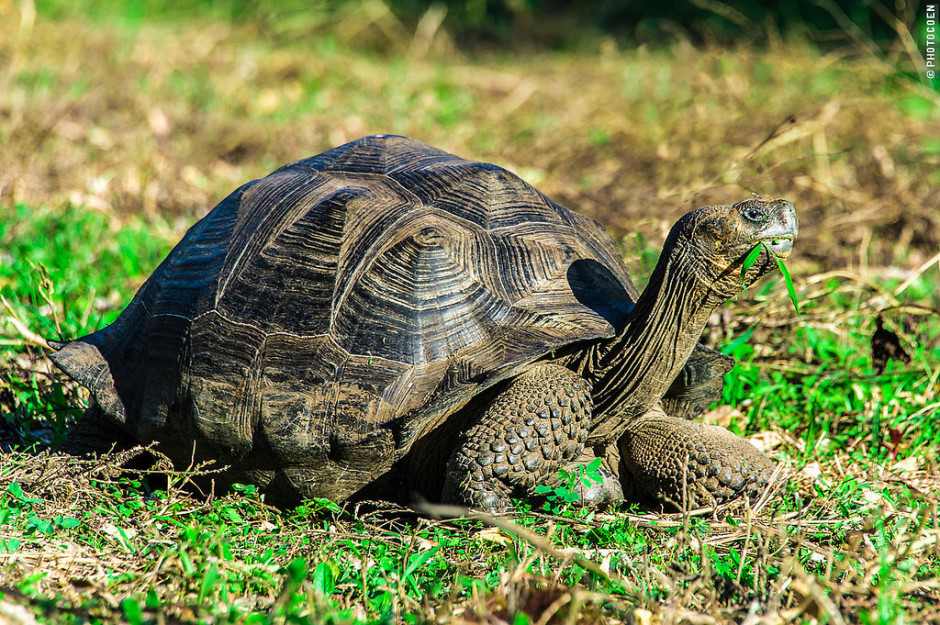 The totem animal of the Galápagos is the giant tortoise. From hundreds of thousands, their numbers have plummeted through centuries of whalers and buccaneers eating them, people killing them for oil (to burn lamps in Guayaquil), and through loss of habitat as people started to colonize some of the islands. On Santa Cruz Island you can visit the Charles Darwin Research Center. Here they breed different species of giant tortoises to increase their numbers again. Santa Cruz is one of the islands where you can see them in the wild as well, in the highlands. 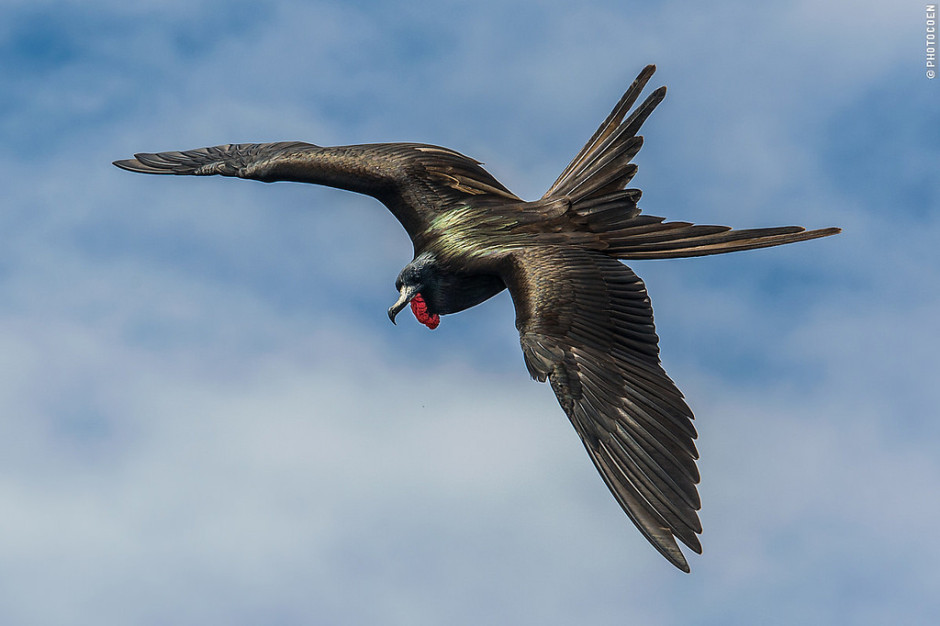 We saw the frigate on different islands throughout our stay. They hunt down other birds to steal their catch. On Genovesa Island we saw such a chase, quite amazing to watch if somewhat terrifying. The frigate simply pulled feathers from its prey to distract it until it would drop its catch. 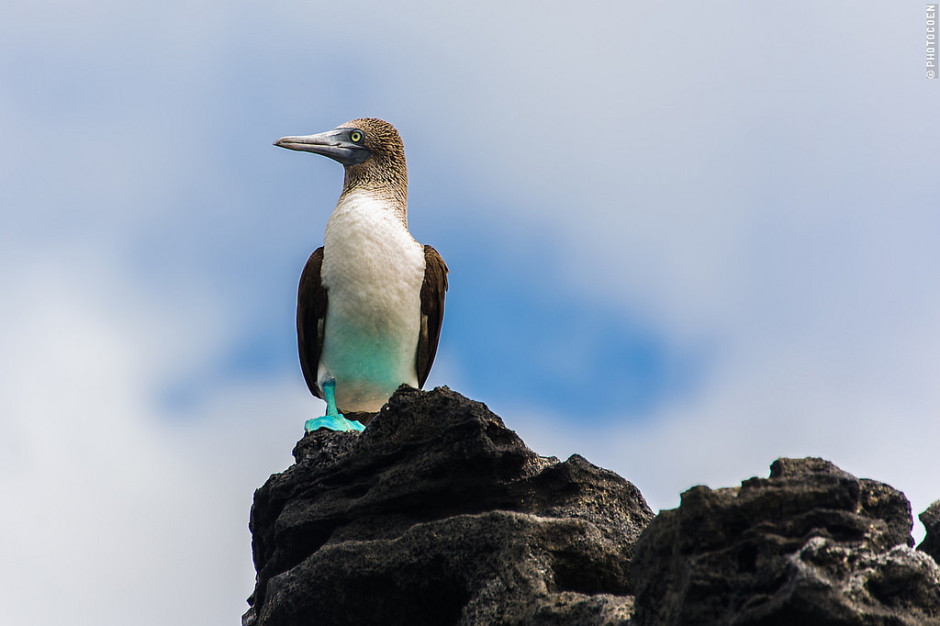 Another of the Galápagos' signature birds is the blue-footed booby. Trails on some of the islands, such as Genovesa Island, are lined with nests of these birds and Coen spent hours on his knees photographing them. Another perfect way to watch them was on the cruise during a panga ride—in a dinghy—around Eden Island. 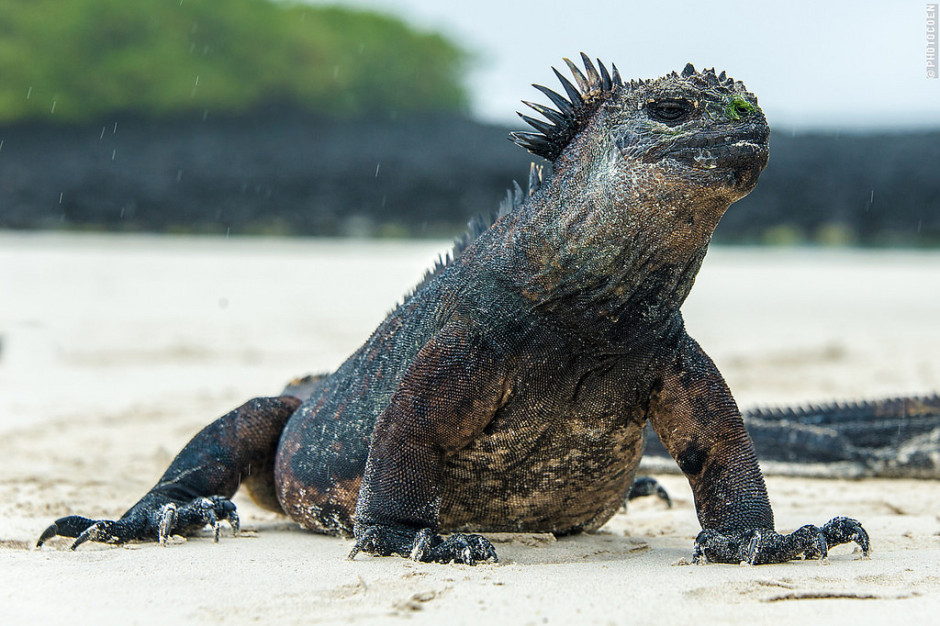 This is a creature we couldn't stop looking at. These reptiles look as if they come from outer space—for me they evoke a feeling of the Lord of the Rings—and are the only sea-going lizards in the world, feeding on red or green algae. However, you will easily spot them on quite a few islands as they lie on the shore for hours on end, letting the sun heat up their bodies that cool down quickly in the cold water. 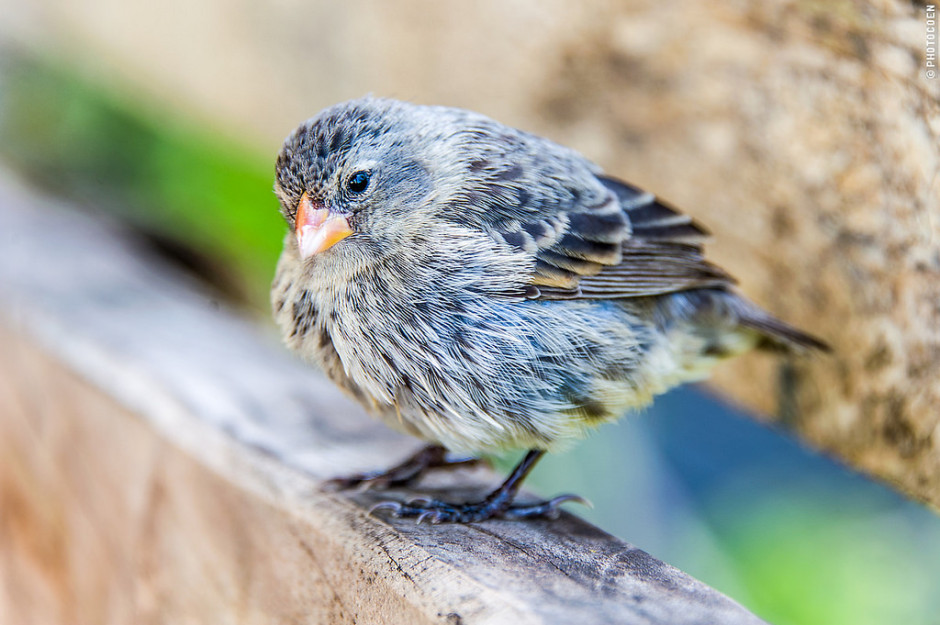 The finch became famous as they played an important part in the development of Darwin's evolutionary theory. He discovered that finches on different islands each had uniquely shaped beaks. Today there are more than a dozen species of finches in the Galápagos. 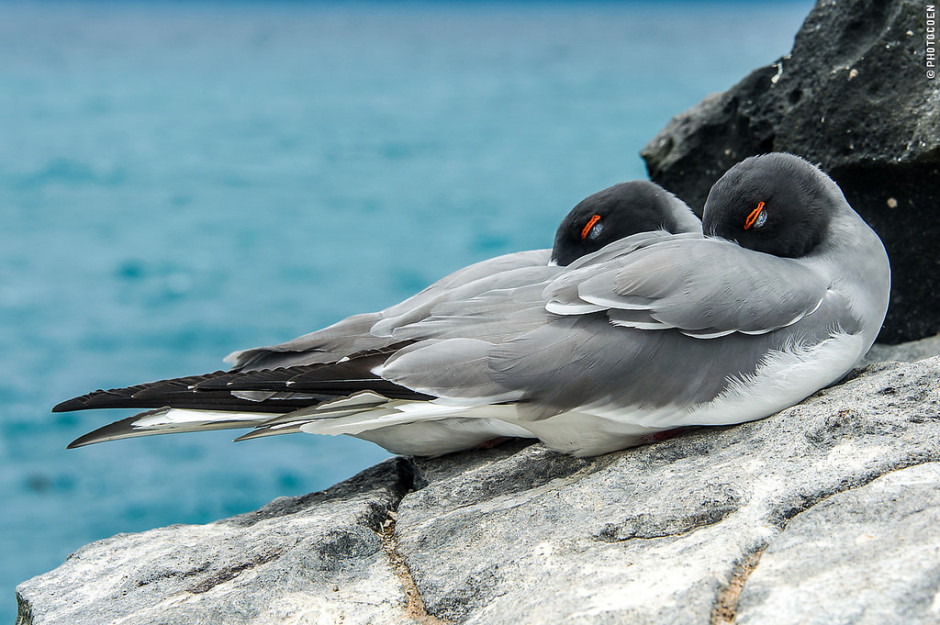 This bird is one of the endemic species of the Galápagos Islands. We spotted them on several islands, among which on Plaza Sur, where the mottled gray birds sat alongside their white chicks on the cliffside. The bird is unusual in its behavior in the sense that it flies out to sea at night, feeding on squid and fish that live on the surface. 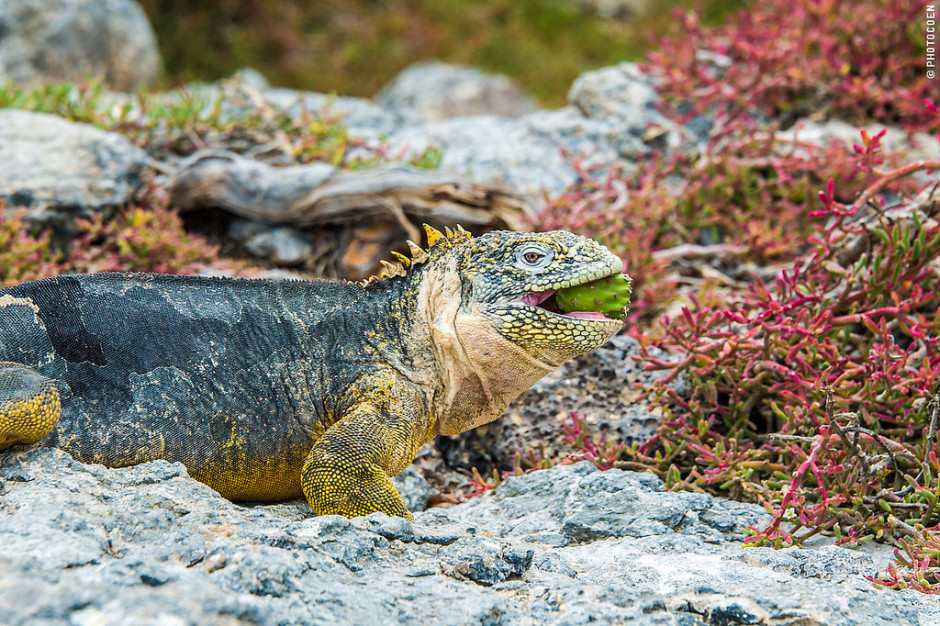 I found these among the most intriguing creatures to watch on the Galápagos. It is hard to believe that the pitch-black marine iguana and this golden-colored land creature both descend from the same iguana that at some point in the past traveled from the mainland of Ecuador, probably floating on a heap of vegetation. On the small island of Plaza Sur are 350 land iguanas. They have no natural predators, so this large population now eats all the giant opuntia fruits. Photo: Coen Wubbles

10 places to see before they disappear 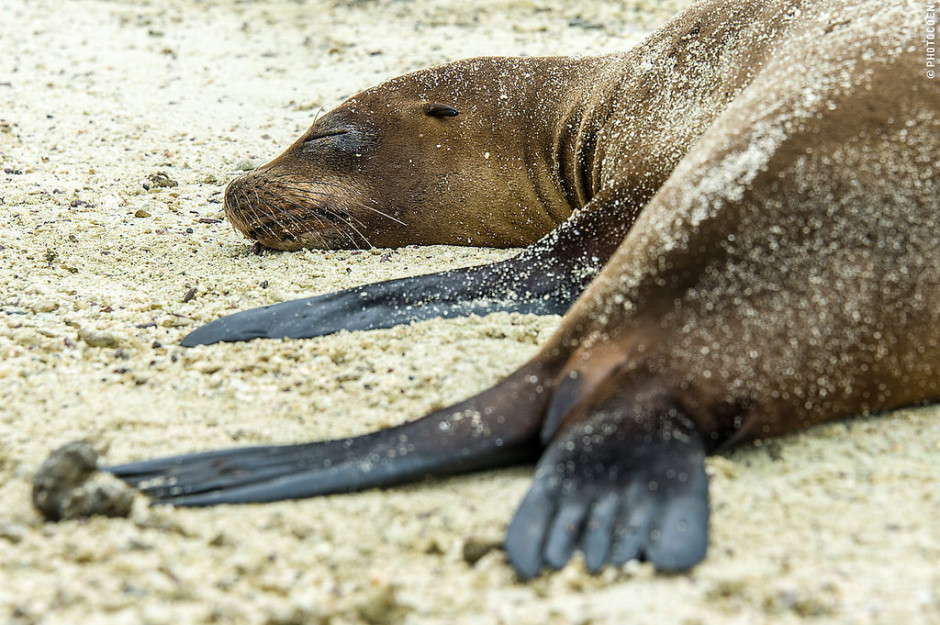 Sea lions live on many of the Galápagos Islands. They are among the animals that may come up to you when you are snorkeling for a quick inquisitive rub or to swim around you for a while. On Plaza Sur, there have been so many sea lions for so long that part of the island’s surface consists of a shiny white patina, the result of the sea lions’ polishing the rocks with their own excrement as they lumber between the sea and the place on shore where they sleep. 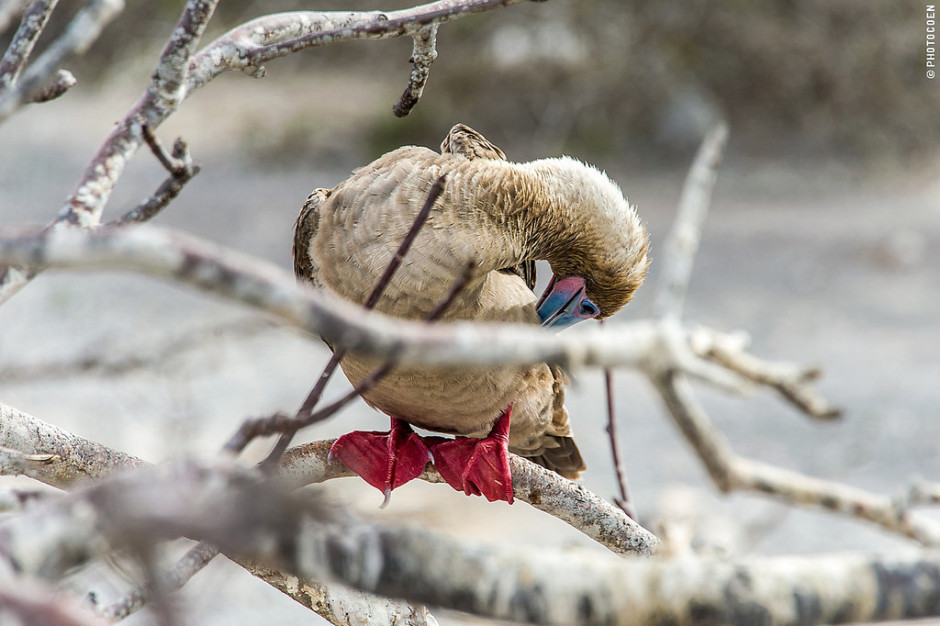 This smallest of the boobies appears clumsy when taking off but seems ready to conquer the world when airborne. I was intrigued not just by its bright red feet but just as much by its colorful, blueish-pinkish bill. On the Galágapos, you will most likely see them on Genovesa Island. They nest in large colonies, in trees and shrubs. 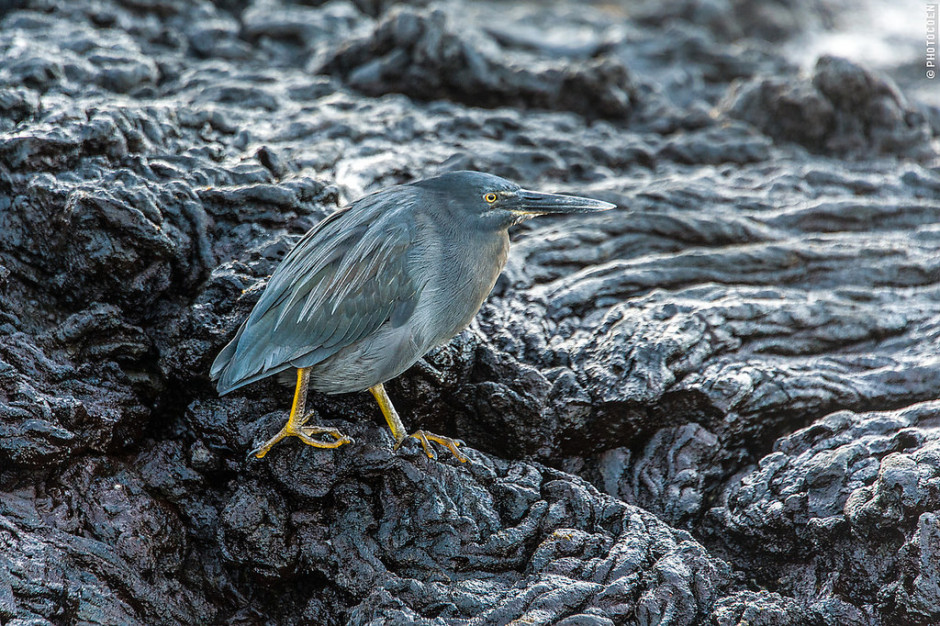 This bird is the only endemic heron to the Galápagos. We came across one on Santiago Island, where its name seemed fitting as we had just hiked for an hour or two on pure lava that dominates part of the coast. Photo: Coen Wubbles 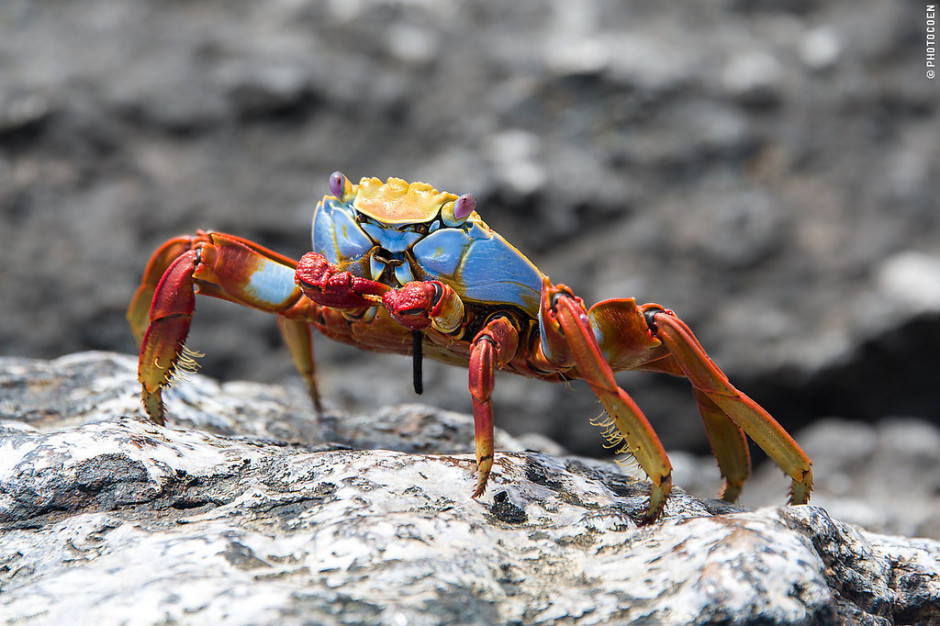 They are among the most colorful animals on the Galápagos. This saltwater crab is common on many of the islands, you will find it among the rocks along shores, but its colors—and those eyes!—make it that we never wearied of studying and following its movements. Photo: Coen Wubbles

Power of a moment: From Kelly Slater to a Chagos native [PICS] 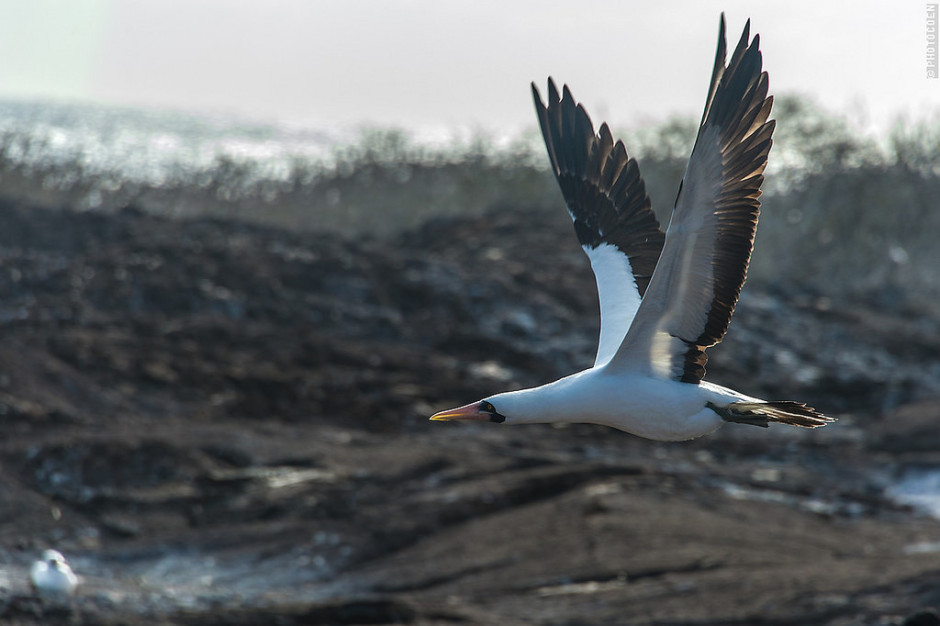 Like the previously mentioned boobies, Genovesa Island is the place to go to watch these birds. They don't have the colorful feet of the red-footed or blue-footed species, but have other remarkable characteristics, albeit not as cute in my opinion. This booby generally lays two eggs and if they both hatch there is an interval of several days. This gives the first chick an advantage and it will push number two out of the nest as soon as it’s born, thus claiming all attention for itself. 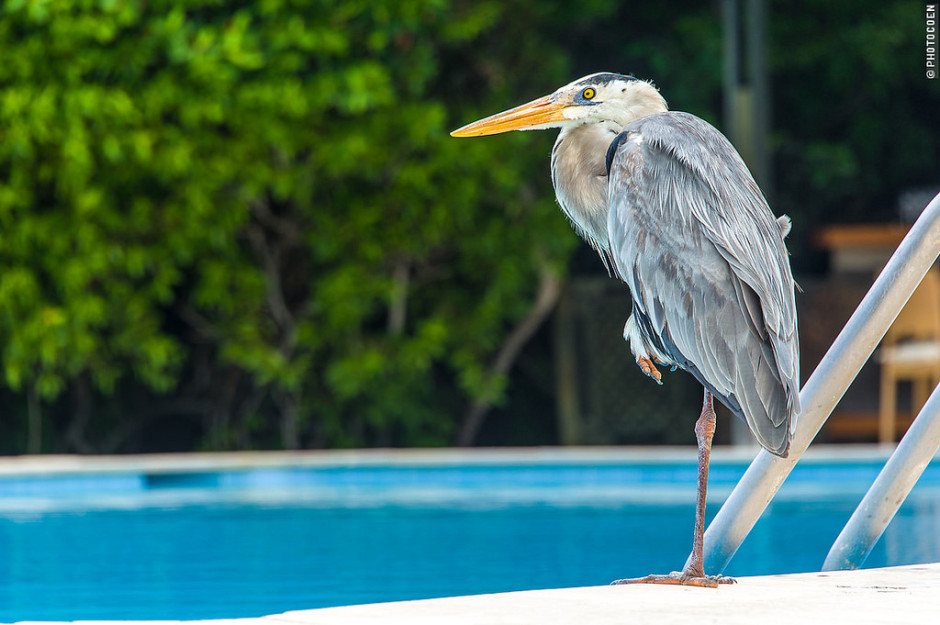 We spotted this heron in several places but we particularly enjoyed watching it standing for hours alongside the pool at the Finch Bay Hotel. It is a frequent visitor, the manager told us, and sometimes there are four of them at the same time, each standing at a corner of the pool. 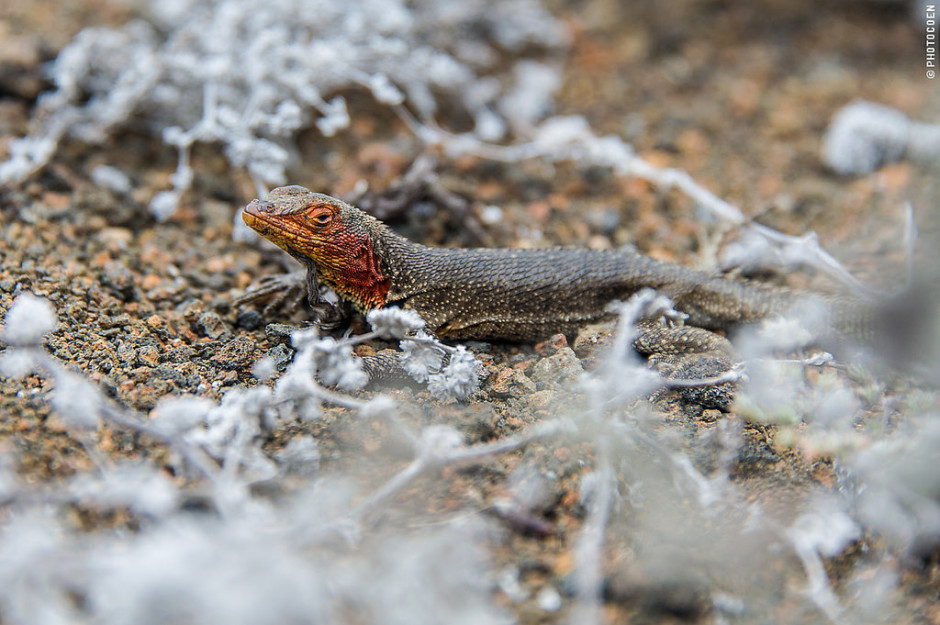 Small but beautiful, we found these reptiles on the arid lowlands of various islands. There are seven endemic species and they are worth a study just for their remarkable colors. Some places, such as the lava grounds on Santiago Island, are so bare that you wonder how they can feed themselves but apparently even these seemingly unfriendly habitats are home to enough moths, flies, beetles or other tiny creatures.

What did you think of this article?
Meh
Good
Awesome
Bookmark
Posted In
Student Work
Destinations
Galapagos, Ecuador

33 places to swim in the world’s clearest water

Wildlife photography in the Galápagos

The delicate dynamics of a Galápagos tour group

The Galápagos is no place for a fear of the ocean