Editor’s note: Every year, Naturally Superior Adventures in Ontario hosts the Voyageur Canoe Musical Tour, a 90km / 4-day paddle with a featured Canadian folk artist for intimate musical entertainment. This year’s musician is Katherine Wheatley. The musical tour concludes in Red Rock, Ontario, on the opening day of the Live From the Rock Folk Festival (August 8-10).

Last August, MatadorU student Joe Baur participated in the Voyageur Canoe Musical Tour on behalf of Matador as a guest of Ontario Tourism.

“Those who have never seen Superior get an inadequate, even inaccurate idea by hearing it spoken of as a ‘lake,’” wrote George Grant, a member of the 1872 Fleming Expedition across Canada. “Superior is a sea. It breeds storms and rains and fogs, like the sea. It is cold in mid-summer as the Atlantic. It is wild, masterful and dread as the Black Sea.” 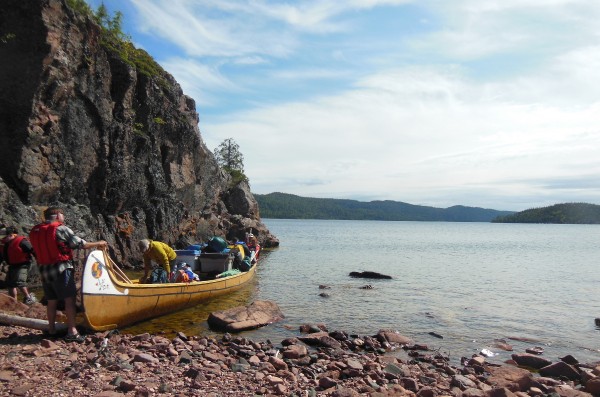 Surrounded by Ontario, Minnesota, Wisconsin, and Michigan’s Upper Peninsula, Superior is the largest freshwater lake in the world by surface area (third by volume), with more water than the other Great Lakes combined. Superior’s deepest point sits at an impressive 1,265 feet. Native to this land, the Ojibwe tribe calls the lake “gichigami,” or “big water.” Central to the Ojibwe mythology is Mishipeshu, a feline/reptilian deity governing Lake Superior whose name means “the Great Lynx” (Mishipeshu is brilliantly depicted in ancient pictographs attributed to the Ojibwe in Lake Superior Provincial Park).

It has long been tradition that travelers who wish to paddle Lake Superior safely are encouraged to make a tobacco offering to appease Mishipeshu.

The VCM Tour traces the rugged northern shore of Lake Superior, and our group of 12 paddlers (led by the incomparable wise-ass and award-winning folk musician Ian Tamblyn) would eventually land in Red Rock, Ontario, a town of 800, to attend the annual Live From the Rock Folk Festival. Only Ian seemed to know how we were going to pack hundreds of pounds of gear and food onto the 36ft voyageur canoe, leaving enough space for 12 paddlers. Of course, the canoe was packed masterfully.

But before we could dip our paddles into Superior and begin our journey, Ian — donning a First Nations cap with an image of the lake god Mishipeshu — approached the water and made the customary offering of tobacco.

Ian Tamblyn is not only an award-winning folk musician with a number of plays and adventure travel expeditions under his belt, he was also the avant of our canoe — the paddler at the front of the boat. As we paddled the lake’s rocky edge, Ian would call out breaks and occasionally questions the rudder’s efficiency and direction. But he did so in a friendly Canadian folk singer sort of way. 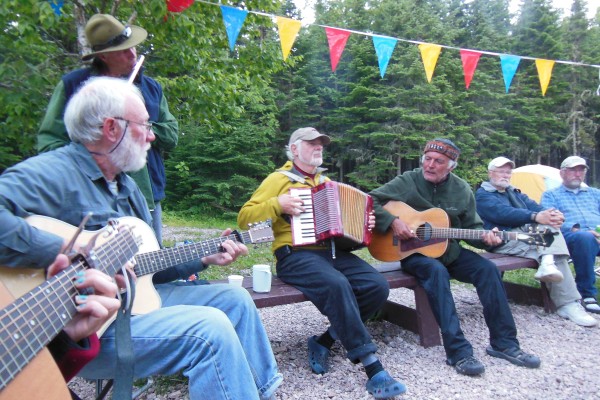 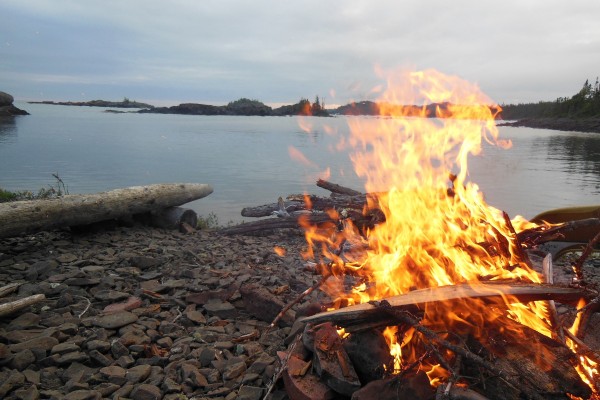 Tagged
Paddling Ontario, Canada
What did you think of this story?
Meh
Good
Awesome