IT ISN’T EASY to admit, but I’m still afraid of the dark. Every time I go night shooting, I swap fresh batteries into my headlamp. It’s my emergency beacon. During 30-second exposures, my imagination wanders to thoughts of charging grizzly bears and stalking mountain lions. When the shutter finally closes, my headlamp snaps me back to reality.

I’ve never encountered a single animal on a night shoot, and I’ve been on plenty since Jasper National Park became a Royal Astronomical Society of Canada “dark sky preserve” in 2011.

The designation not only recognizes Jasper’s night skies as southwestern Canada’s best viewing platform but aims to protect them, too. Dark sky preserves exist to guard nocturnal wildlife habitat and quality night sky viewing. Lights won’t be switched off, but Parks Canada, local businesses, and residents are encouraged to adopt responsible lighting strategies to prevent artificial light from creeping skyward and creating the orange-haze effect known as light pollution. Tourism Jasper’s role is to promote both the best star gazing areas, like Pyramid Lake and the Athabasca Glacier, and the annual Dark Sky Festival, which takes place in October. 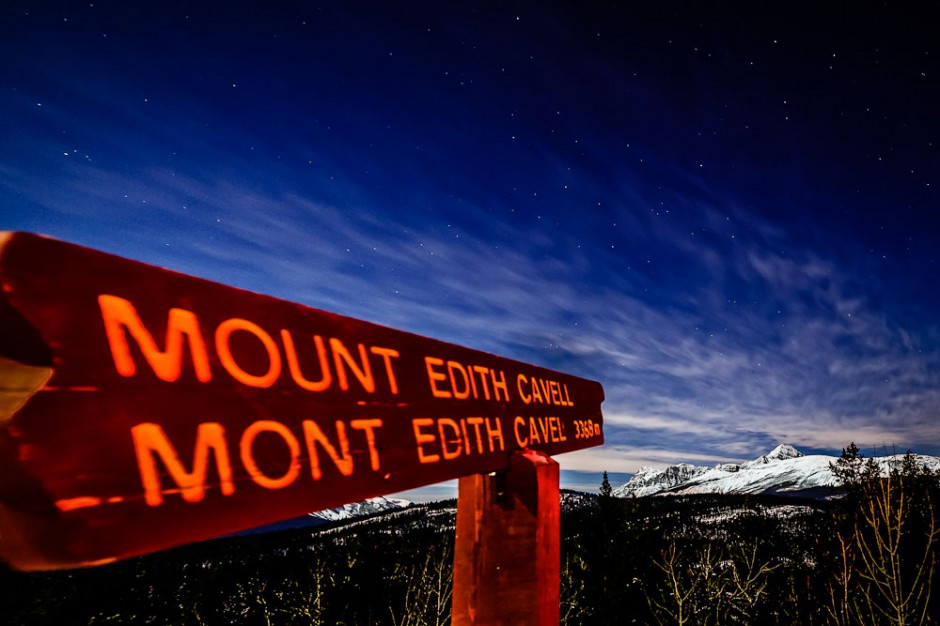 Night photography isn't too technical. I shoot the majority of my images with the same settings and rely on composition and light painting to improve their impact. The most common settings are: ISO 800-3200, f/2.8 aperture, and 30" shutter speed. Photographers can use the rule of 600. Because of the Earth's rotation, stars appear to move through an image. The shutter speed required to freeze the stars in place depends on the focal length, but the formula is easy: 600/focal length = shutter speed. 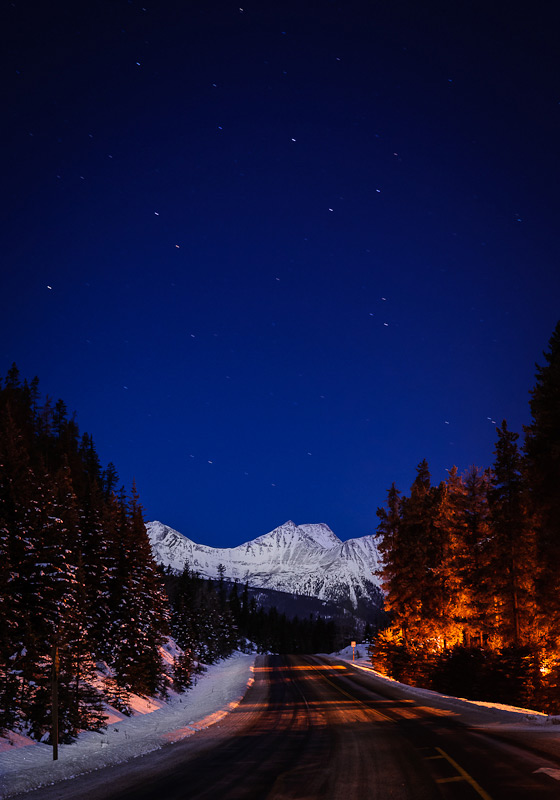 Jasper National Park is the world's largest dark sky preserve, and it isn't by a small margin. It's bigger than all other Royal Astronomical Society of Canada's preserves combined, and it's the only one in Canada that contains a town. 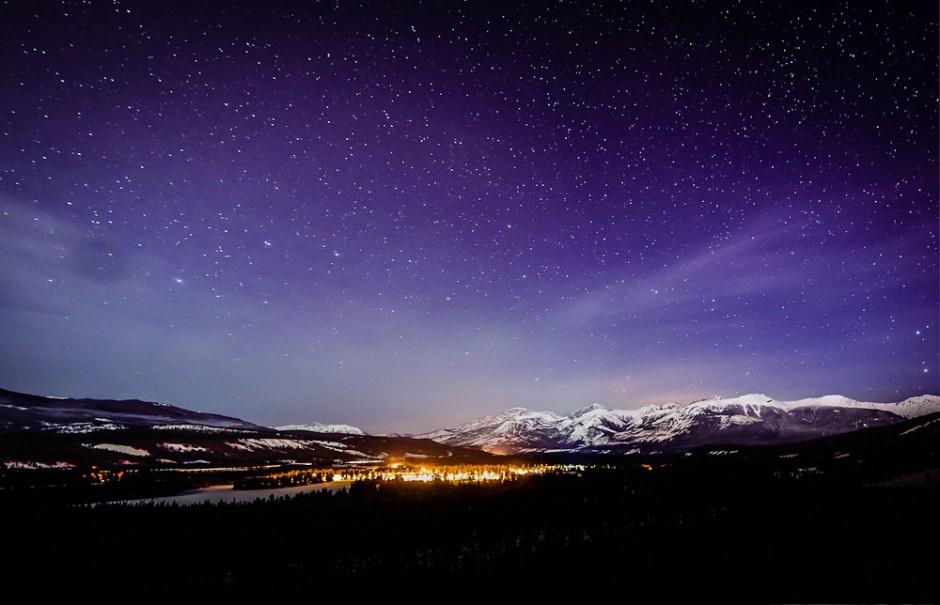 This image is a perfect example of why Jasper met the Royal Astronomical Society of Canada's prerequisites for a dark sky preserve. I shot this image from Old Fort Point, less than 2km from home, and it includes Jasper Park Lodge, the park's second biggest light source. 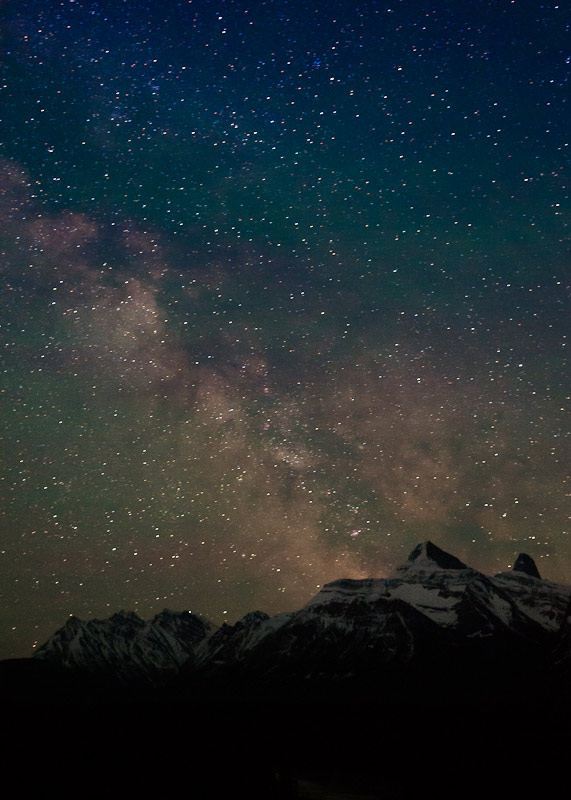 "He who would travel happily must travel light."

While I have no doubt that "The Little Prince" author Antoine de Saint-Exupery wasn't talking about night photography, he could have been. Star photography doesn't require much gear because telephoto lenses and filters are seldom used. My typical kit includes a Nikon d300 dSLR, a Nikon 17-55 mm f/2.8 lens, a speedlight and headlamp, a Manfrotto Tripod, and a cable release. 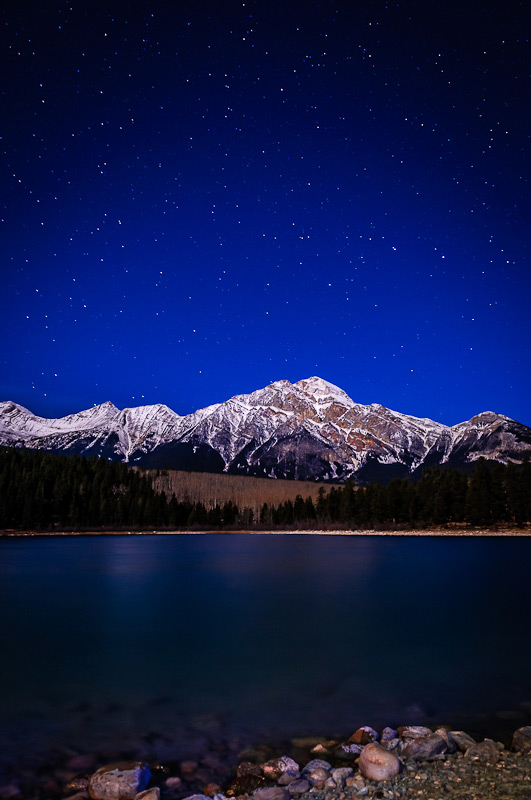 Both Pyramid Mountain and its namesake lake sit 7km west of Jasper. Check out this local history: Winston Churchill selected the site to build a prototype 'unsinkable' battleship built of ice during WWII (the project was abandoned), a fisherman landed Alberta's largest white sucker, and the lake's only island is commonly referred to as "Wedding Isle" because of the steady stream of nuptials celebrated on its shore. At night, it's deserted. 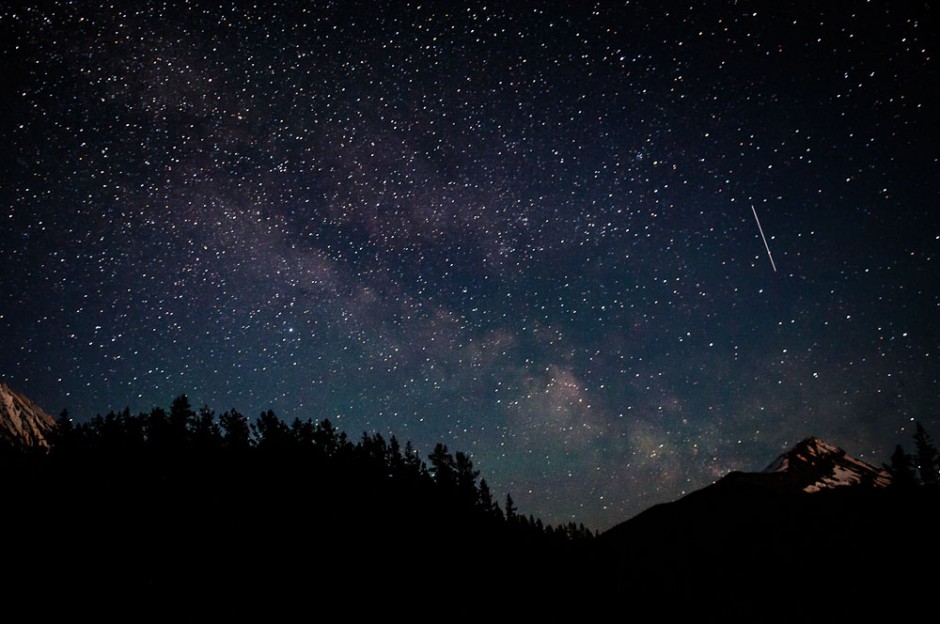 The term "dark sky" doesn't refer to the amount of light visible from above. It describes a lack of light pollution -- haze that often obstructs our view of the stars. A darker sky means brighter stars, and nowhere in southwestern Canada is it darker than the Athabasca Glacier. It's usually unnecessary to make the 100km drive from town for a great view. The cumulative effect of Jasper's light footprint is barely noticeable along the entire Icefields Parkway. 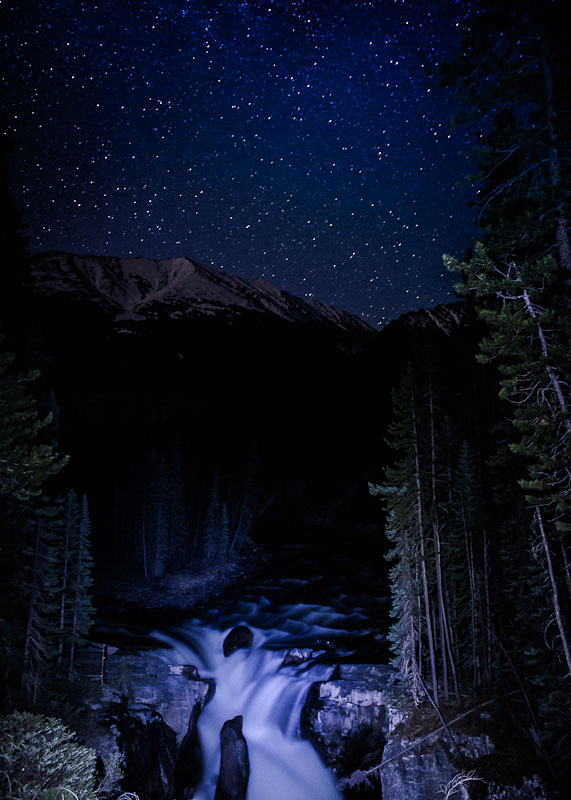 The word Sunwapta comes from the Nakoda Native group that used to inhabit Jasper National Park and other portions of western Canada. It means "turbulent waters," and there isn't a more apt name for this place. Sunwapta Falls connects the Chaba and Athabasca Valleys through a series of whitewater highlighted by two 18-meter waterfalls. 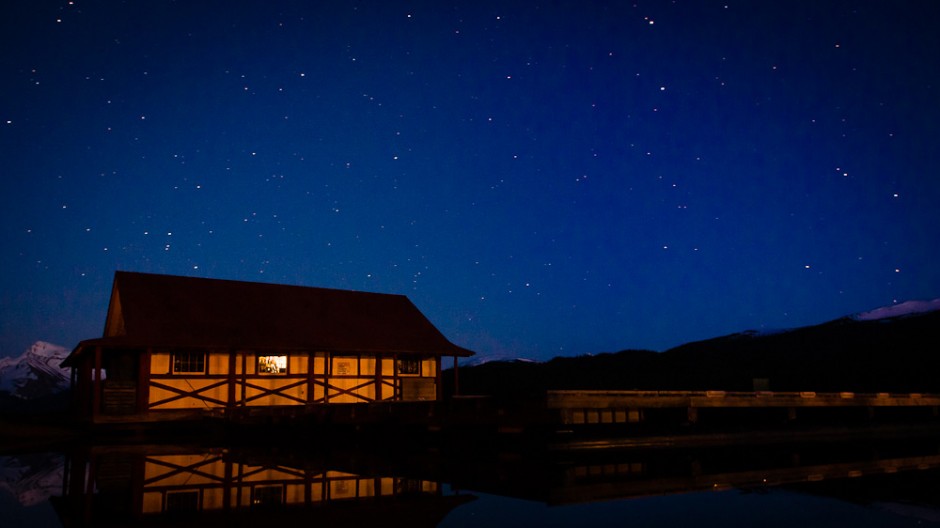 The Curly Phillips Boathouse at Maligne Lake was built in 1928, two years before Jasper became a national park. Philips also built the tour boat on the lake, which offered tours to Spirit Island. The boathouse is an Alberta Registered Historic Resource, and the scenic cruise was nominated the "best boat tour in Canada" by Reader’s Digest subscribers.

Tagged
Photo + Video + Film Alberta, Canada
What did you think of this story?
Meh
Good
Awesome
✖
travelstoke
Download the mobile app
stoked by