For the last 2,500 years or so, Atlantic tides and the abundance of sealife they contain have formed the identity of New Brunswick maritime culture.

In 1784 the first settlement was established and then, like now, fishing was not only a means of sustenance and survival, but also a source of enjoyment. Weir fishing, an ancient technique that tricks shoals of sardines into permanent wooden nets, is still practiced in New Brunswick. These days few can make a living off weir fishing, as decades of overfishing have depleted the stock to a fraction of its traditional size. And it’s not only the sardines that have been overfished. In 1992, the Canadian government put a moratorium on North Atlantic cod fishing. The cod had been decimated by 500 years of people taking as much as they could catch. At the time, it was estimated that less than 1% of the original cod biomass in the Atlantic remained.

Despite the depletion, the diversity of wildlife has brought crowds of people — like me — camera in hand, hoping to glimpse the still-beautiful natural bounty of the Bay of Fundy…making tourism the other leading industry in the province. But just like the fishermen and the canneries, the lives of those working in this burgeoning sector are tied hand and foot to the health of the environment. The future of New Brunswick’s fragile ecosystems remains unclear. Will the tourism industry help protect, preserve, and replenish the great natural abundance that originally drew people to this place? I hope so. 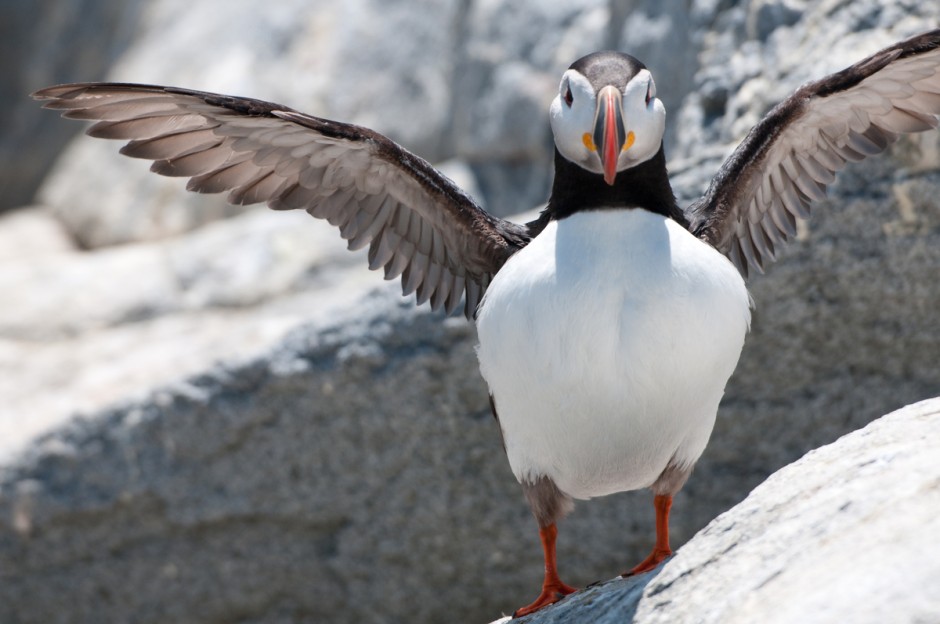 An Atlantic Puffin (Fratercula arctica) basks in the sun on a warm day on Machias Seal Island, in the Bay of Fundy. These birds are pelagic, spending most of their lives at sea, and returning to land only to breed. Machias Seal Island is home to around 6,000 pairs of the birds, who lay only one egg per year, and often mate for life. 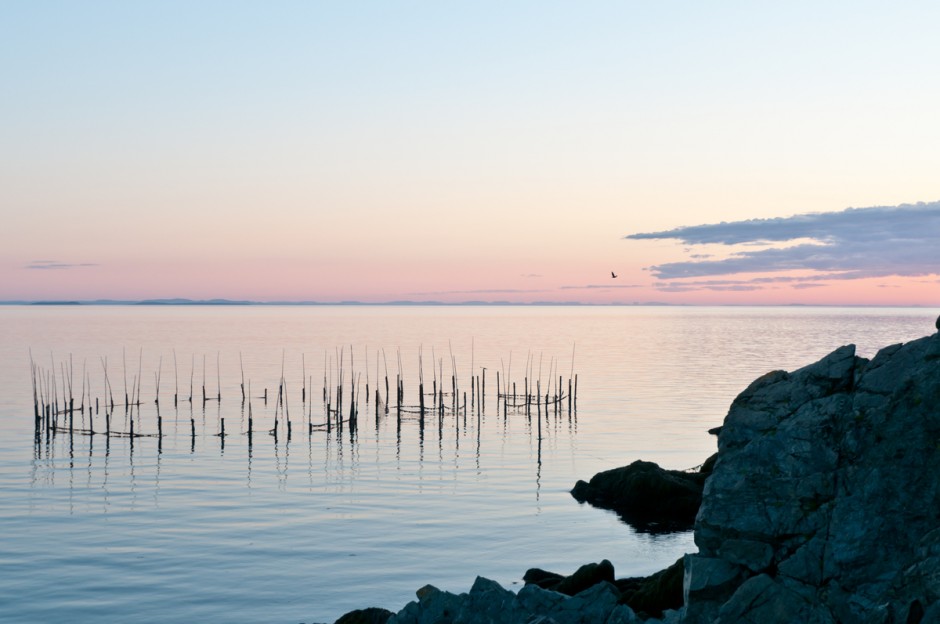 A fishing weir on the coast of Grand Manan Island. Weir fishing is an ancient practice that relies on local knowledge of currents and tides. This type of fishing was once very common on the island, but now only a handful of operations exist. 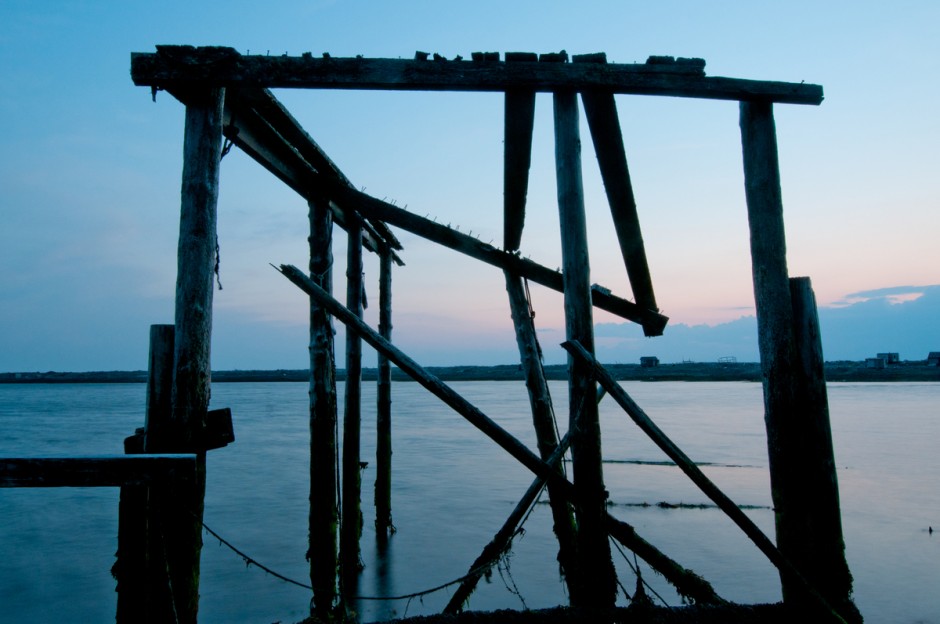 An old lookout at Dark Harbour. The western shore of Grand Manan is mostly inaccessible except by boat. Dark Harbour is one of the few exceptions. 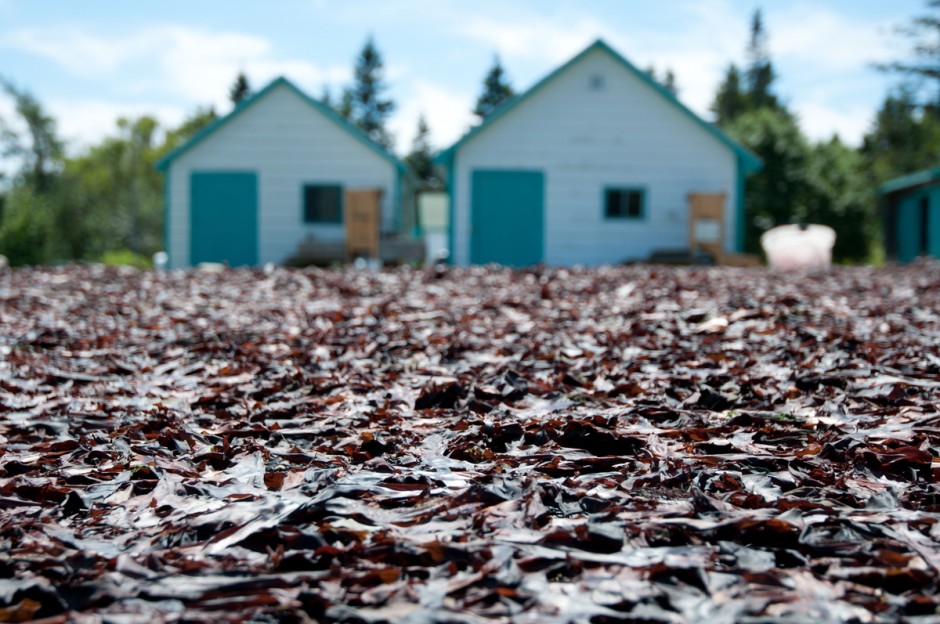 The seaweed known as dulse dries in the sun at Roland's Sea Vegetables near Dark Harbour, on the west coast of Grand Manan Island. The seaweed is said to be some of the the best in the world (at least by Grand Manan locals), and is an export that is far more reliable than fish, although not as profitable. 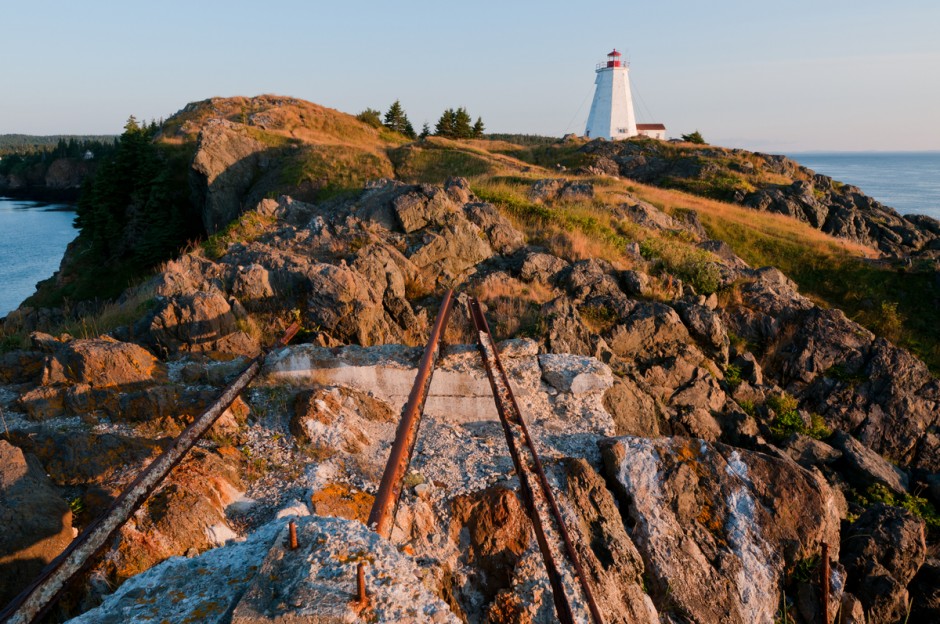 A short cliffside stroll near North Head will take you to the Swallowtail Lighthouse. 152 years after it was built, the lighthouse still stands as an icon of the island through the cold Bay of Fundy winters and bright summers. Large gray seals are often seen from these cliffs stealing fish from the fishing wiers near the shore. This could also be the best place to take in a sunrise on Grand Manan. 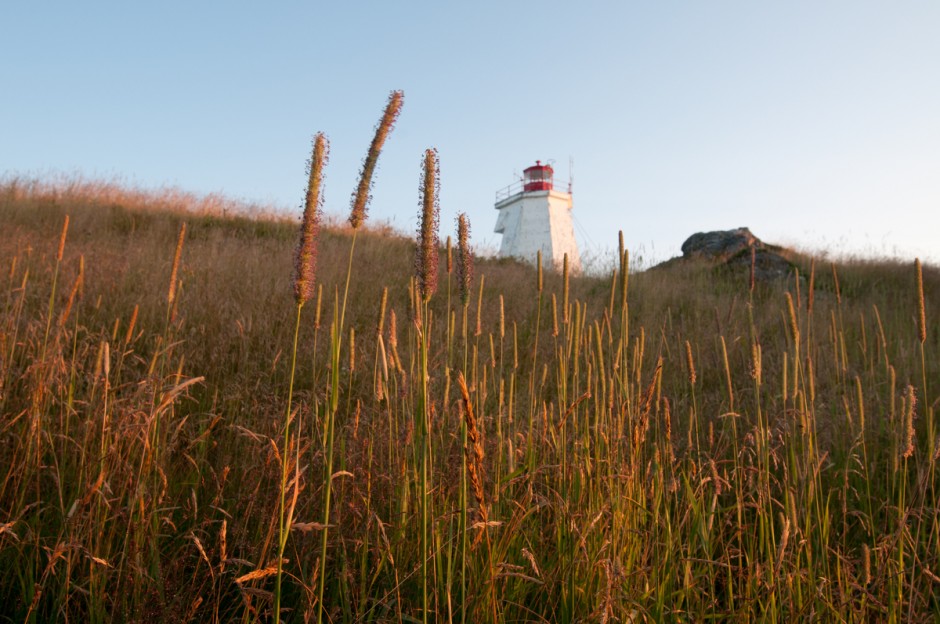 Another view of the Swallowtail Lighthouse. This structure greets all those arriving to Grand Manan by ferry. It opened on July 7, 1860, after a series of shipwrecks on the north coast of Grand Manan. In one wreck, the 1,009-ton Lord Ashburton sunk during a midnight gale, taking the lives of 21 crewmen. 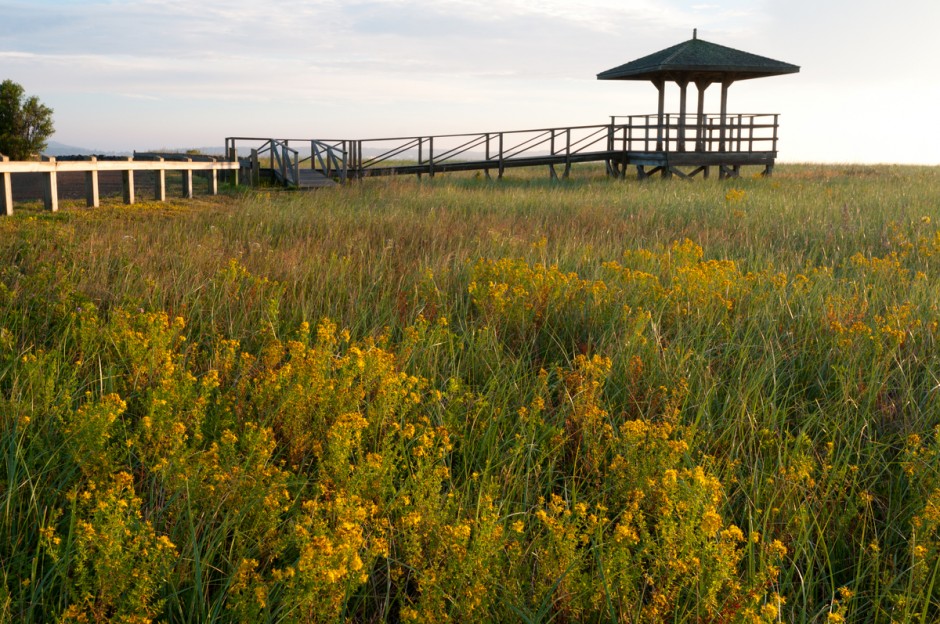 Flowers and grasses thrive in the tidal wetlands of Castalia Marsh. This unique coastal ecosystem is in constant flux and has adapted to the salt- and freshwater flows. 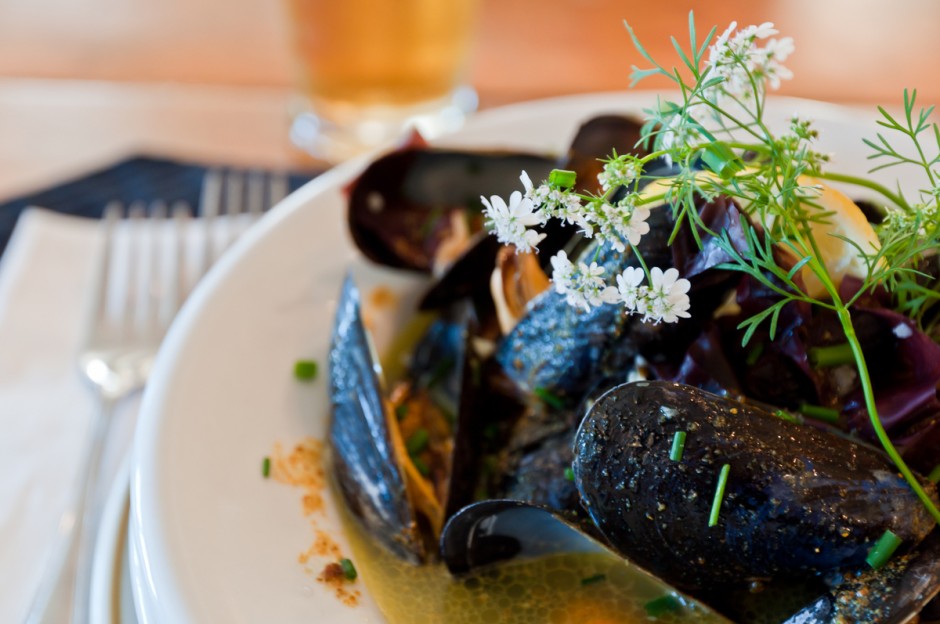 Mussels are cooked with locally harvested dulse at McLaughin's Wharf Inn, on Grand Manan Island. Dulse is an edible seaweed that grows in abundance on the north side of the island. 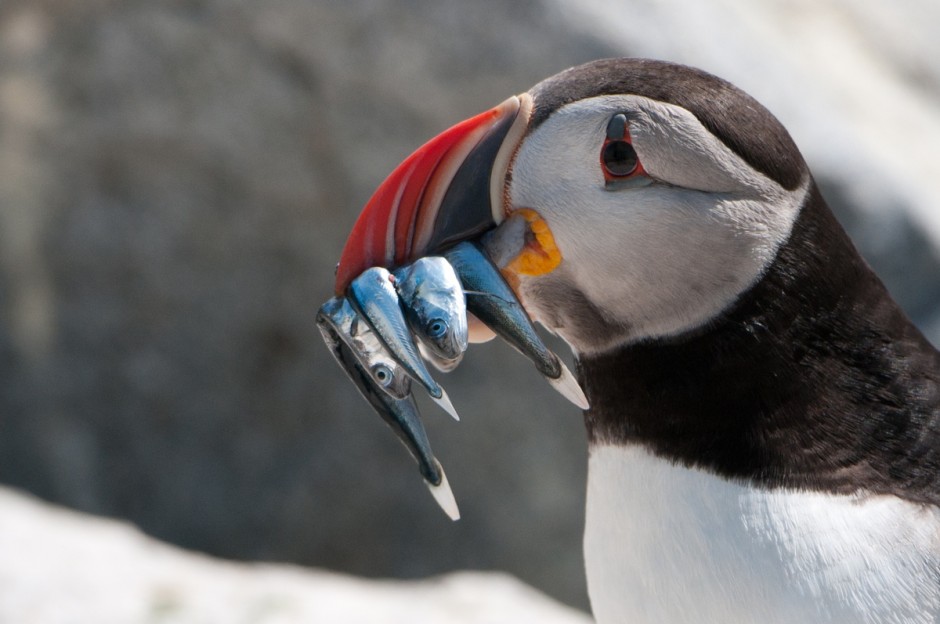 An Atlantic Puffin prepares to feed its underground chicks a meal of fish on Machias Seal Island. The birds have special hooks that let them hold onto several fish at once, while hunting and catching yet more. Puffins feed almost exclusively on fish, making them as reliant on fish stocks as humans in the Bay of Fundy. 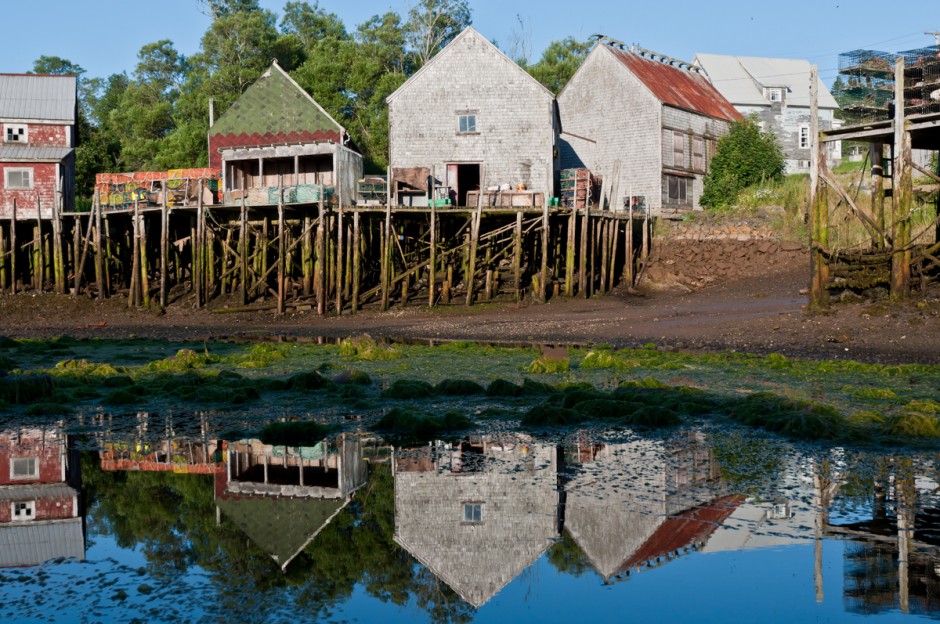 The stillness of dawn reflects tidal piers in Seal Cove. The small town was once the sight of a large cannery operation, and now is home to the Sardine Museum and Herring Hall of Fame. 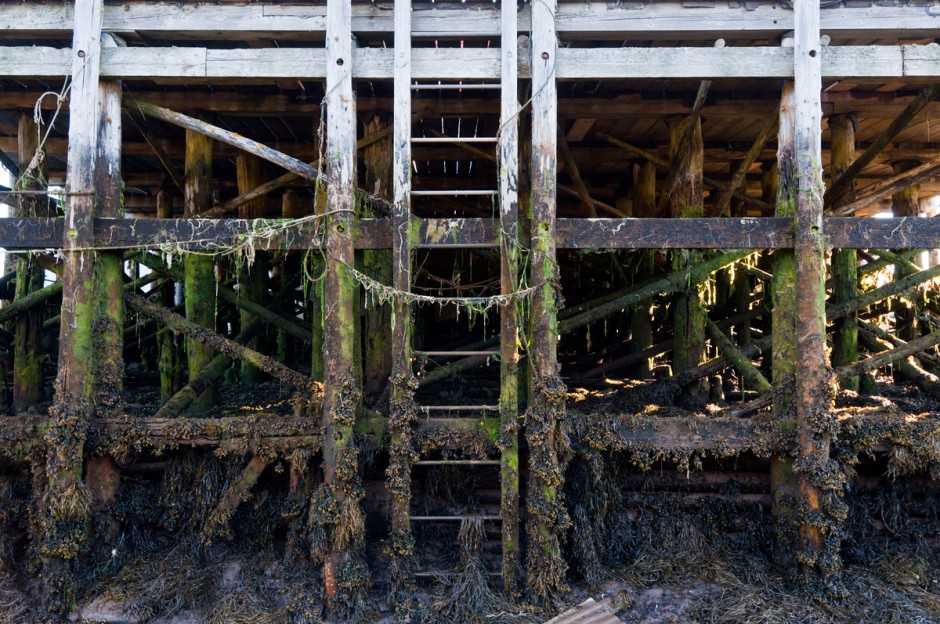 The lower half of a dilapidated pier in Seal Cove is draped in seaweed and muck. Every day 20-30ft tidal exchanges sweep the coasts of the island, creating a line of demarcation between the dry and the frequently submerged. 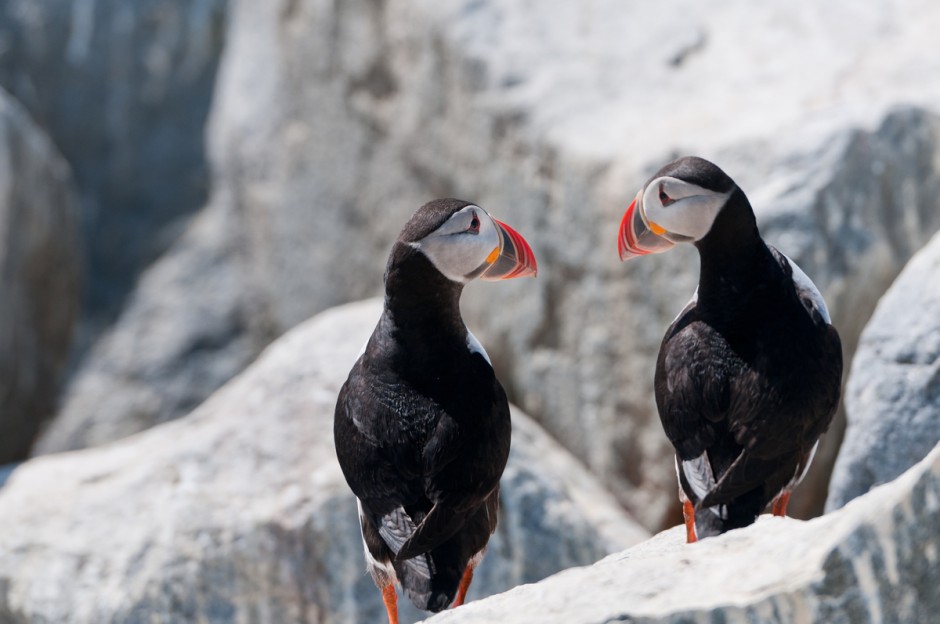 Atlantic Puffins form monogamous pairs and spread the burden of raising the tiny puffin babies between both parents. 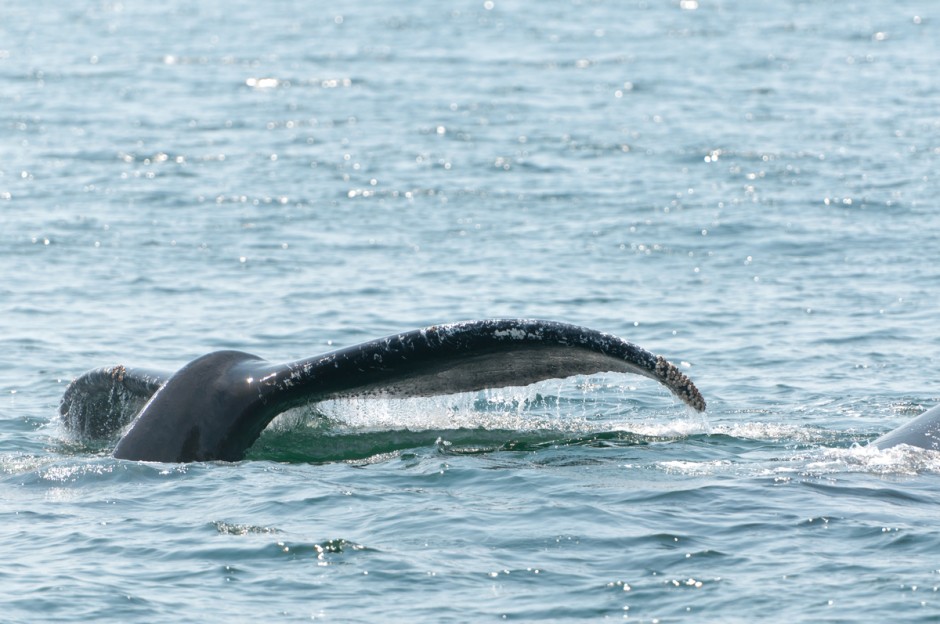 I saw a mother and baby humpback whale (Megaptera novaeangliae) surface in the Bay of Fundy while on a whale watching trip with Whales-n-Sails. The growing tourism industry on Grand Manan is fueled largely by whale watching. But as herring populations diminish, whale behavior is harder to predict.

This post is proudly produced in partnership with Destination Canada.
Tagged
New Brunswick, Canada
What did you think of this story?
Meh
Good
Awesome
✖
travelstoke
Download the mobile app
stoked by