Perhaps to a fly fisherman, paradise is bone fishing in the Bahamas. Or to a golfer it’s playing Pebble Beach. For an accomplished powder skier there is no question: paradise is definitely helicopter skiing in British Columbia.

It is incomparable. It is awesome. It is the ultimate ski experience. Most importantly, it is habit forming. In my many years of helicopter skiing I can’t recall how many people have said “I had to do this once… it’s the trip of a lifetime”.

Only once? Good luck.

While not for the meek nor for the beginner, heli-skiing is far from the exclusive domain of extreme mountain pros.

The magic of a helicopter lifting off and whisking you and a few friends into the sky, dropping you on top of a pure and untouched ridge with nothing but a bowl of clean, light frosted flakes below is simply an out-of-this-world experience.

While not for the meek nor for the beginner, heli-skiing is far from the exclusive domain of extreme mountain pros.

Since the advent of wider and more user-friendly powder skis some 15 years ago, deep powder skiing has become significantly more accessible for mortals like you and me. These days, any skier who maintains good physical conditioning and can handle most trails at their local ski resort can learn the basics of deep powder skiing in only a few runs.

Why, one might wonder, has British Columbia become the Mecca for heli-skiing?

The first key to B.C.’s inside track is elevation. When you start at valley elevations of 150 to 500 meters above sea level, surrounded by peaks that reach 3000 meters, you get more than great potential for big-time vertical.

You also get the perfect environment for safe helicopter usage, as these elevations are low enough for helicopters to work within their optimum performance levels. 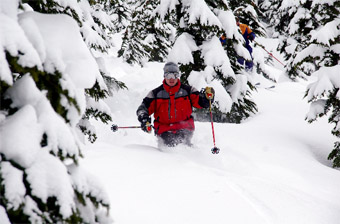 Try the same thing in Colorado, for example, and you are asking the equipment and pilots to perform in an environment that pushes the limits of both the aircraft and the skill set of even the best pilots.

Add to this the fact that British Columbia enjoys an incredibly reliable storm track and thus a great snow pack, and the recipe for paradise is complete.

A Short History Of Heli-Skiing In British Columbia

In the late 1960’s the industry began with a company that still flourishes in the province,
CMH, or Canadian Mountain Holidays which was started by the visionary ski guide, Hans Gmoser.

Now with about a dozen lodges spread throughout some of the best powder skiing locations in B.C., CMH has set the standard for the industry.

CMH was followed about 10 years later by several companies which were started by some of Gmoser’s original guides, including companies such as Mike Wiegele Helicopter Skiing out of Blue River B.C. and Selkirk Tangiers in Revelstoke B.C., both of which have enjoyed over 25 years as key players in the industry.

A New Generation Of Heli-Skiing

It didn’t stop there, however. As the next generation of guides grew up working for these successful companies, there were individuals among them who possessed the entrepreneurial spirit. 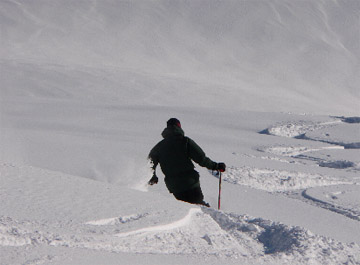 Ready for the hot-tub yet? photo by Steve Langer

Coincidentally, at the same time, the province of British Columbia was interested in finding ways to bring more tourist dollars into the region.

For powder hounds, it was a perfect storm: smaller boutique operations began to pop up throughout the province offering a more personalized experience.

These new operators generally used smaller more powerful helicopters, with an emphasis on quality, service and amenities such as massage and great food, all fostered by the enthusiasm of a younger generation who cut their teeth guiding and working with many of the pioneers of the industry.

Additionally, with the number of operations having increased significantly, the competition for skiers also increased.

What had once been a seller’s market, with very few companies providing heli-skiing services, became a much more balanced market.

These days, after the initial heli-ski boom, three to four times the number of operators are all vying for heli-ski dollars and attracting new clients by providing increased quality and value.

With such growth also come growing pains. Responsible operators take great care in selecting and continually training both their guides and support staff in all areas of skiing and guiding safety.

Ski guides in Canada must be certified by either the European or the Canadian mountain guides associations, both of which require years of on the job experience as an apprentice as well as rigorous training and testing before a guide can be certified. 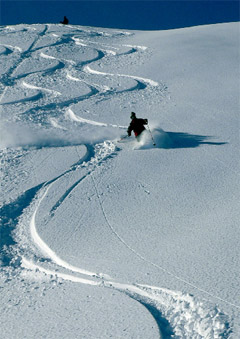 (A note of warning: in the United States no such requirement exists).

Additionally, the industry in British Columbia is self governed by it’s own association – Helicat Canada – which insists that its member operators meet specific standards relative to operations, safety, and environmental stewardship.

This alliance creates a conduit within which the various operator members can compare notes together with their associates in the Canadian Avalanche Association to keep a close eye on snow safety issues throughout each season.

The current president of Helicat Canada, John Forrest, is a partner in one of the finest of the newer operations, Northern Escape Heli-Skiing in the town of Terrace.

A good personal friend and a consummate professional, John is just one of many of his generation who are taking the mechanized ski industry in British Columbia to the next level.

While heli-skiing carries certain inherent dangers that should be carefully considered before determining that this is the vacation for you, it’s comforting to know that the level of expertise and cooperation among the heli-ski professionals of British Columbia continues to bring the highest possible levels of safety to a truly great adventure sport.

Matador member Tal Fletcher is a heli-ski guide in Alaska. David Miller wrote a classic profile of Tal a while back in Traverse magazine – “Feeling Gravity’s Pull”.