“LET’S JUST QUIT OUR JOBS AND TRAVEL AROUND FOR LIKE, A YEAR” my girlfriend said as we discussed going on vacation. “Are you serious?” I asked. “Yeah, OK. Let’s do it.” And that is how it began.

This type of trip would require money, and lots of it, so we began saving. We didn’t set a date right away, because we had no idea how long it would take to save the amount of money we would need for this adventure. But it would take a while. We both worked two jobs for a period, and even moved in with my mom to save on rent.

We didn’t splurge, we didn’t go out to eat, we lived minimally, and we saved. After nearly two years of this, we decided to get married, and naturally this trip we had been planning became our honeymoon. We used a honeymoon registry instead of the traditional registry list, so anyone wanting to give us a gift was invited to pitch in to our honeymoon fund. This gave us a much needed funds boost… The trip became real when we bought our plane tickets. Not too long after that, we quit our jobs, and there was no looking back.

There were some naysayers who didn’t understand how we could spend so much money on a trip, and tried to convince us to put a down payment on a house instead. We had two counterpoints to this line of thinking — first of all, this wasn’t just a trip — it was the experience of a lifetime, and one we would never be able to repeat (at least not in the same way). And while we would like to buy a house one day, this was not that day. The way we saw it, homeowners don’t actually own their homes, and we have the rest of our lives to be in debt to a bank. We were never more sure that we were doing the right thing.

The next 10 months were spent traveling through 20 countries on 4 continents. We racked up numerable unforgettable life experiences, and learned much about ourselves, and each other, along the way. Upon returning to California, we were jobless, homeless, and broke, but thankfully not in debt. We started the next chapter of our lives as husband and wife from scratch, and both began new careers. Though we had very little money, we were rich indeed.

To see more of my photography on Instagram, follow @shawnparkin, and for more photos of our honeymoon around the world, check out #parkinworldtour . 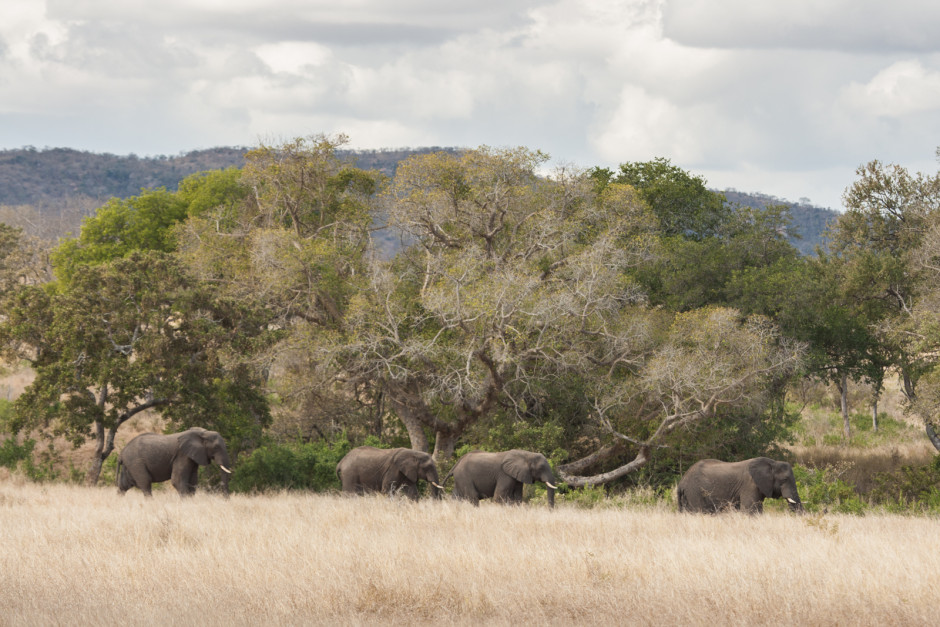 Straight from our arrival in Johannesburg we headed to Kruger National Park, one of South Africa’s largest game reserves. Seeing elephants and many other animals in the wild and up-close was awe-inspiring. One of the greatest experiences of our lives, and we were barely off our first flight. We couldn’t have chosen a better way to kick off our honeymoon around the world. 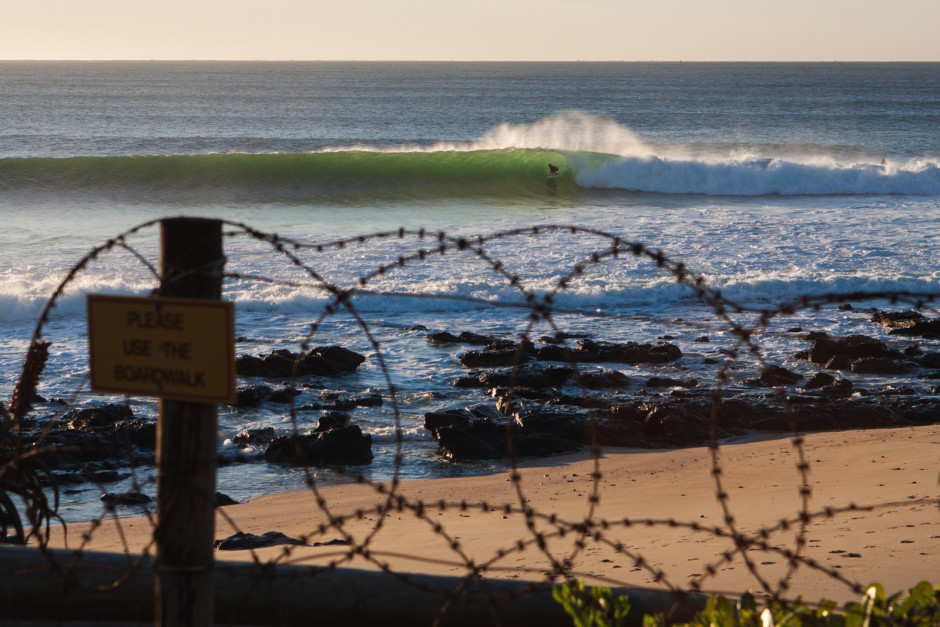 For regular-footed surfers like myself, Jeffrey’s Bay is a dream wave, with lined up walls of water marching down the point, offering speedy and lengthy rides… though you can’t show up expecting to catch a lot of waves in a short amount of time. The locals have the wave pretty well dialed, and take off deeper than any blow-ins who happen to be renting a room in one of the many accommodations on the point. Having dreamt of this wave for most of my life, I didn’t want to just pass through. So we rented a studio at Supertubes for two weeks, and I enjoyed back to back to back swells while my loving bride bundled up. The same winter storms that send waves peeling down the point at J-Bay also bring low air temps and frigid wind. While I feasted on waves, she dreamt of the warm days ahead, spent in wine country. 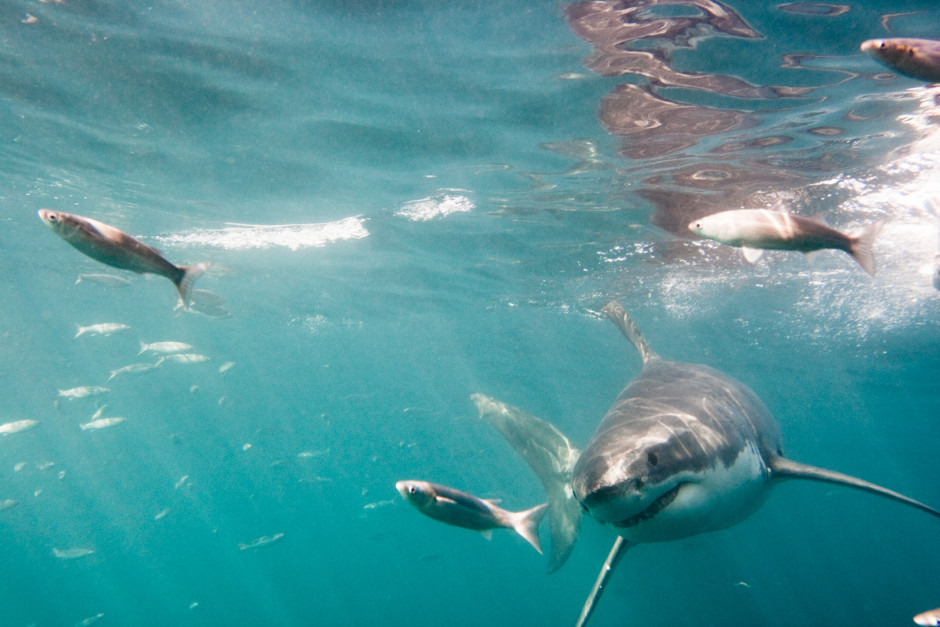 Why limit our wildlife encounters to land? Having always been intrigued by these apex predators, we jumped at the chance to see them up-close in one of the best areas in the world to see great whites. This is the same area where they filmed the breaching sharks with high-speed cameras for the Planet Earth series. 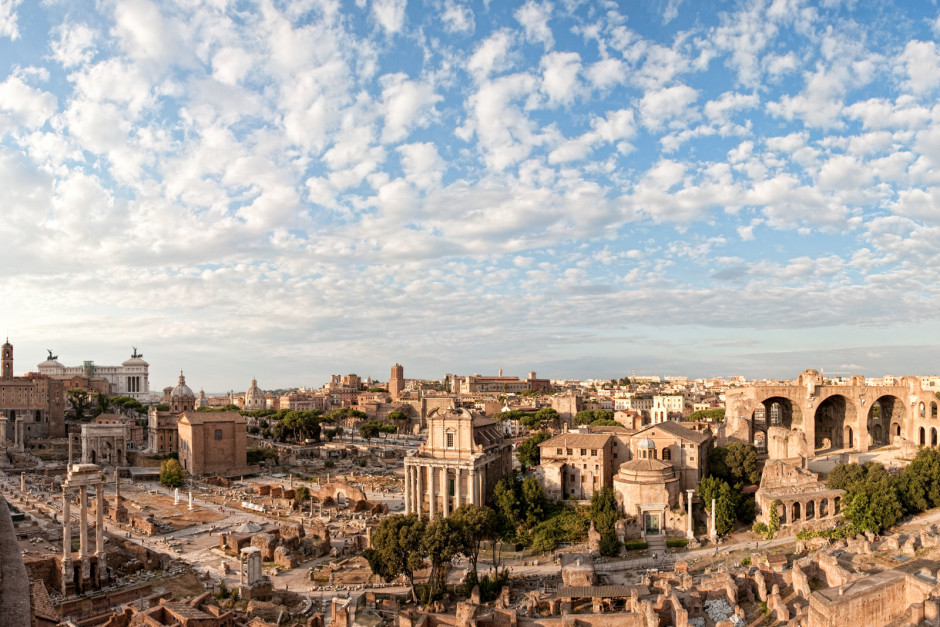 When in Rome… one must visit the Roman Forum. 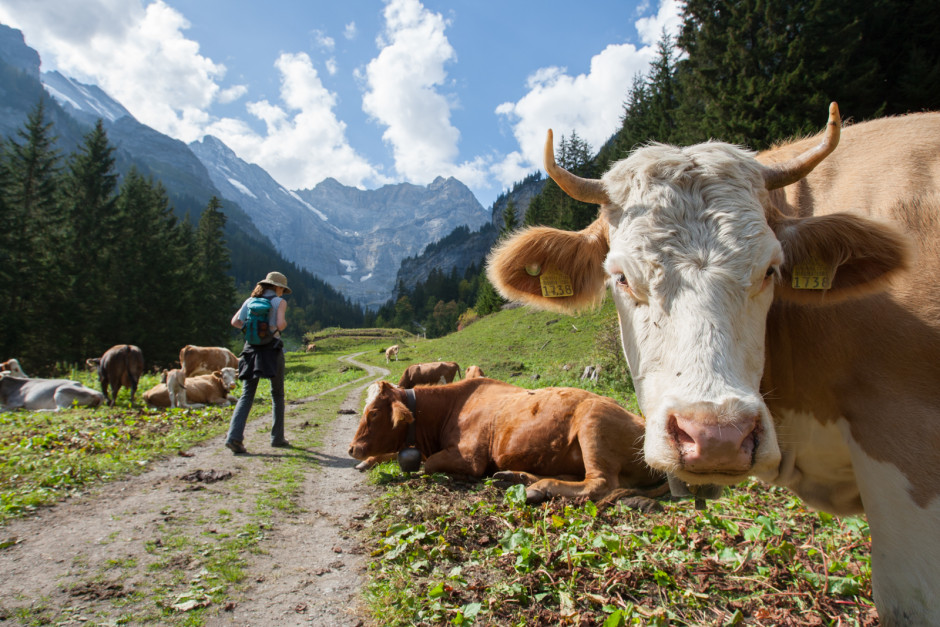 For some fresh air and incredible hiking, we went to the Swiss mountain town of Gimmelwald. 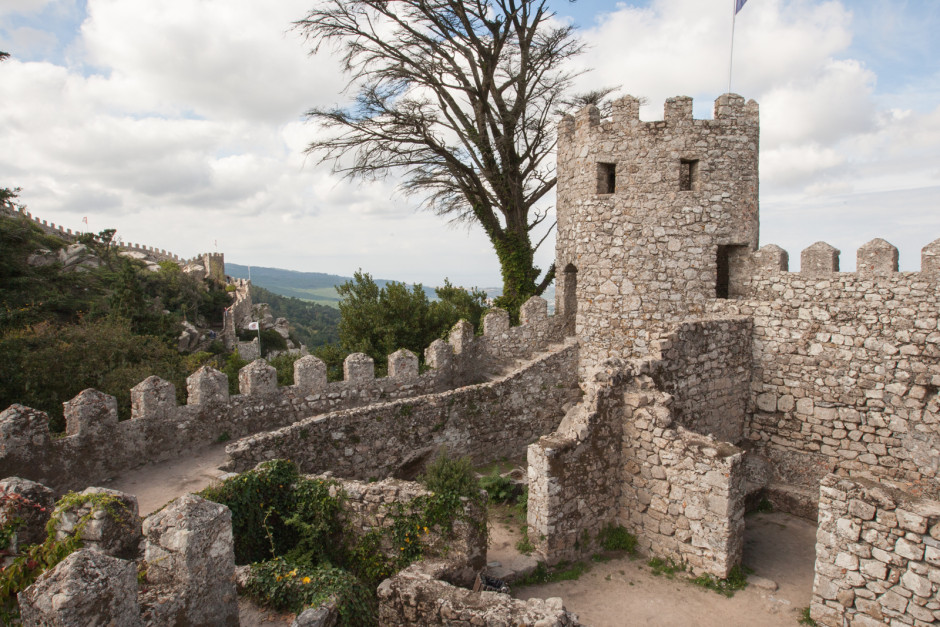 Castle of the Moors, Portugal

The Castle of the Moors, Sintra, Portugal. Europe has such a fascinating history, and we were able to learn so much more about it by visiting places like this. 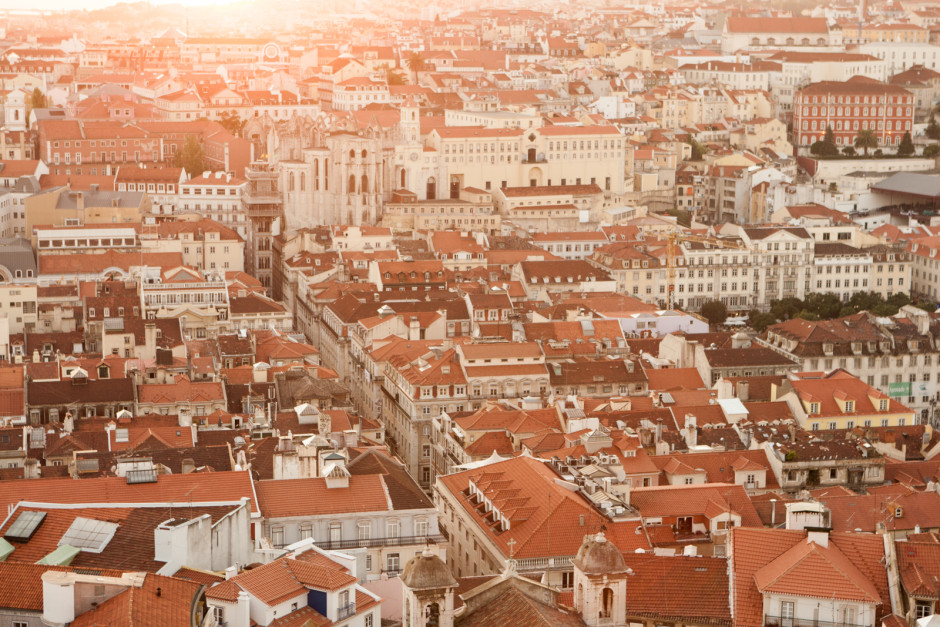 An elevated look at central Lisbon, as seen from St. George’s Castle on the hill. A traveler could spend weeks in Lisbon trying to take it all in. 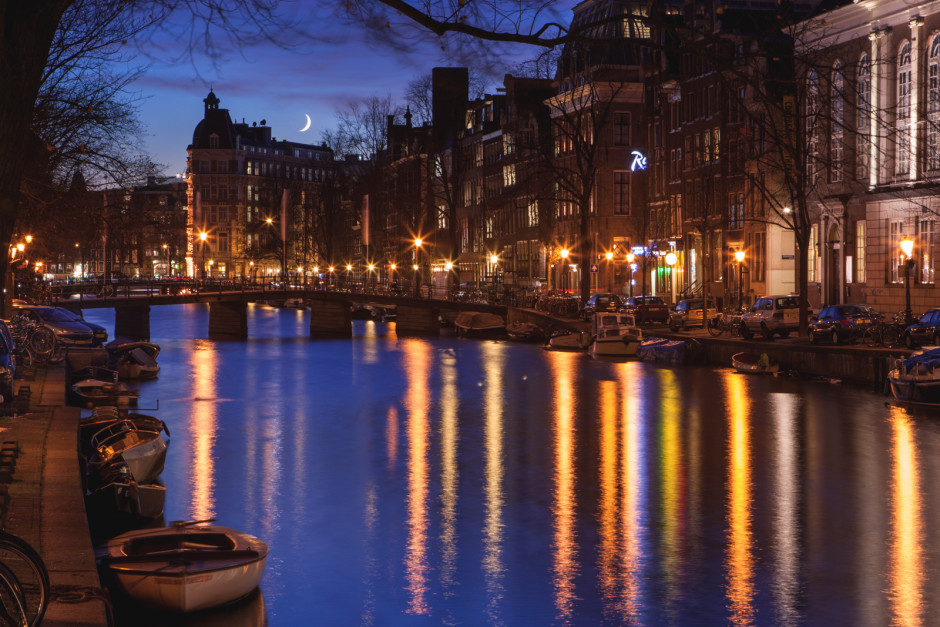 Twilight in Amsterdam after a long day of exploring by foot. While many are getting ready for a night on the town, these weary backpackers are winding down. We were traveling for so long, we had to really budget our money. That meant most nights we cooked our own simple meals from groceries rather than eating out, and enjoyed free entertainment, aka sightseeing, over paid shows and events. 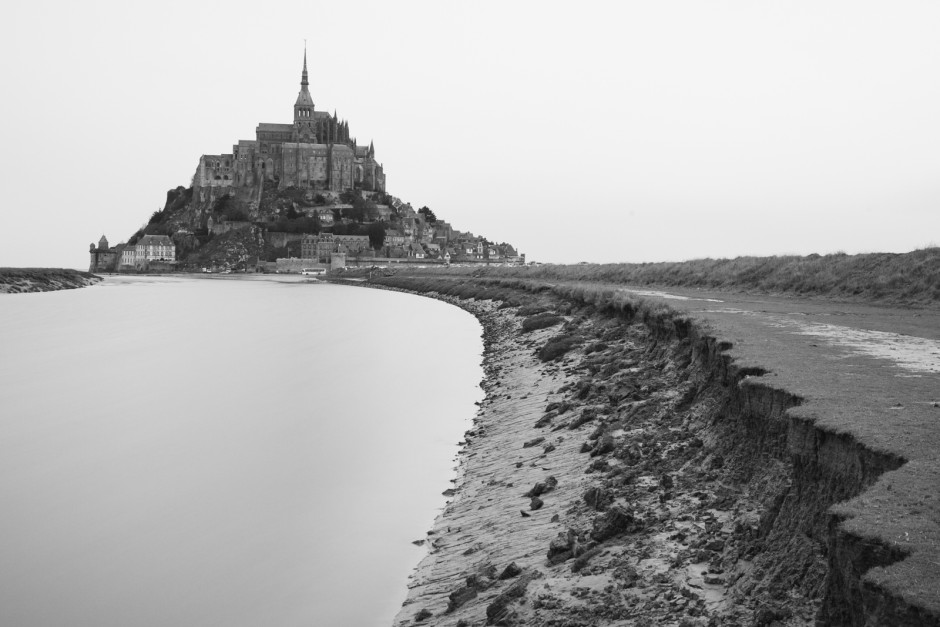 Mont St. Michel island commune in Normandy, France. A monastery and surrounding community are built atop a rock in an intertidal zone. During high tide, Mont St. Michel is surrounded by water, and only connected to the mainland by a raised road. This ranks as one of most interesting places we’ve visited. 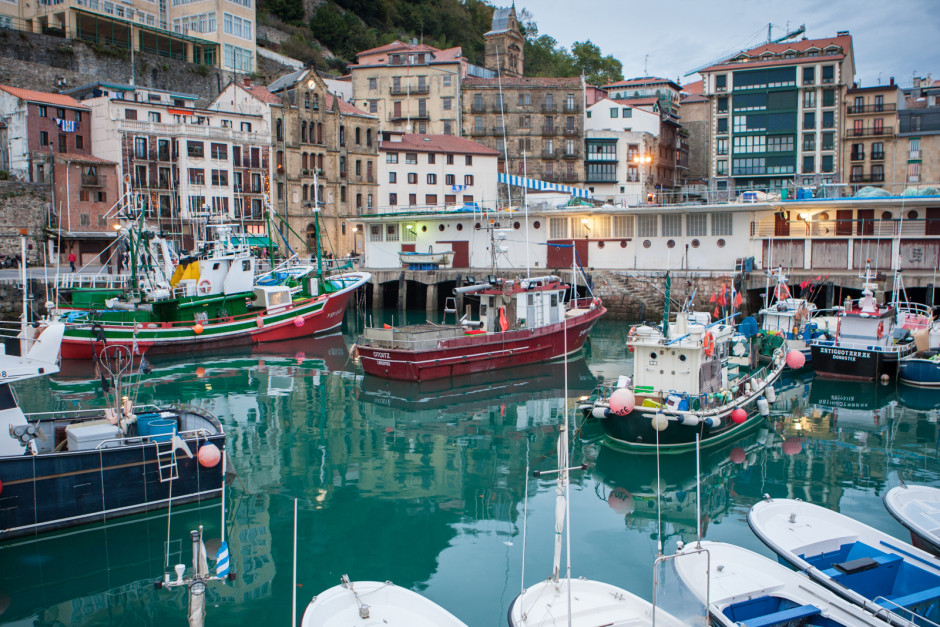 San Sebastian harbor. This small Basque city has gained international popularity with travelers looking for culture, cuisine, nightlife, and scenery. We highly recommend staying to sample the pintxos (Basque tapas) and sangria for a at least a few days. 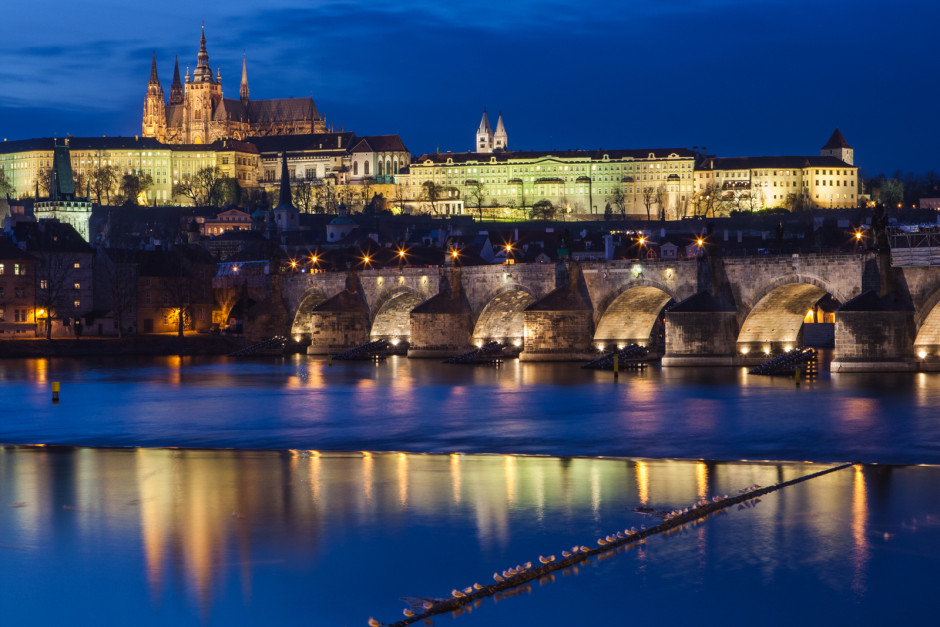 A European must-see is Prague. Pictured here is Prague Castle and St. Vitus Cathedral overlooking the city, with the Vltava River and Charles Bridge in the foreground. 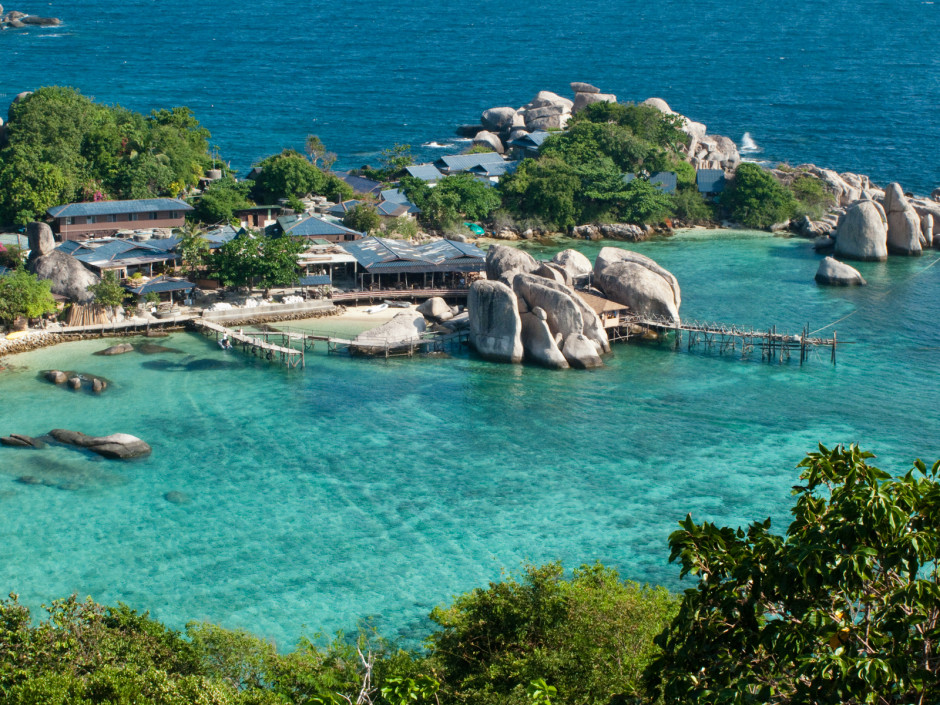 After a couple months of winter in Europe, we were ready for a change of scenery and climate, so we headed to Thailand. This is a tiny rock island called Koh Nang Yuan, just off of Koh Tao. The clear water and abundant sea life made it a great place to go scuba diving for the first time. 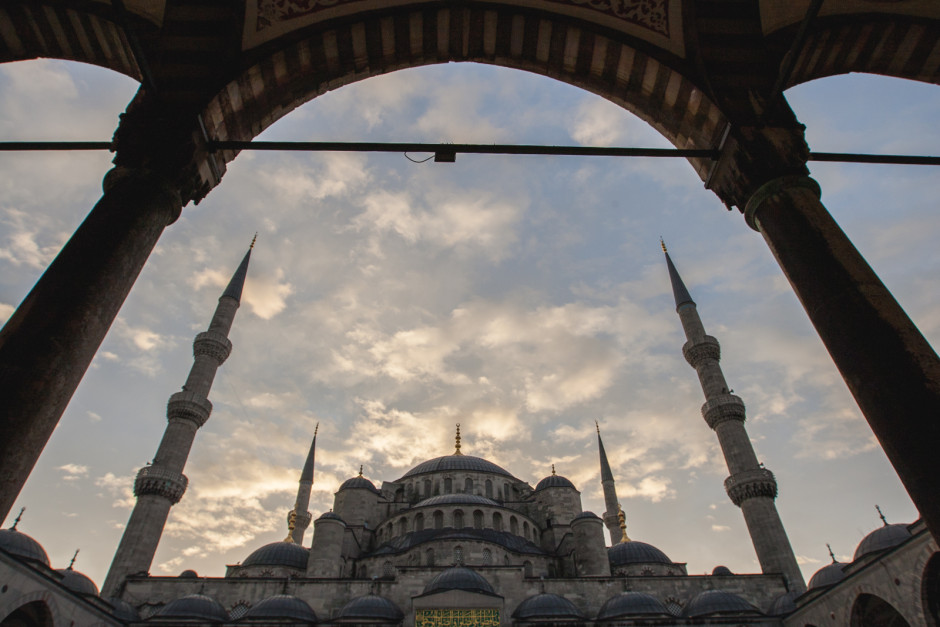 We hadn’t planned a stop in Istanbul , but our travel agent insisted we go since our trip from Europe to Southeast Asia would take us through there. So we gave ourselves 4 days, which wasn’t nearly enough. Istanbul is the only city in the world that straddles two continents, and as such, is very diverse. While much of Turkey is Muslim and conservative, Istanbul is very cosmopolitan, a melting pot of sorts. From the architecture and history, to the cuisine and shopping, this city quickly became one of our favorites. Pictured here, the Sultan Ahmed Mosque, aka Blue Mosque -- open to tourists of all faiths. 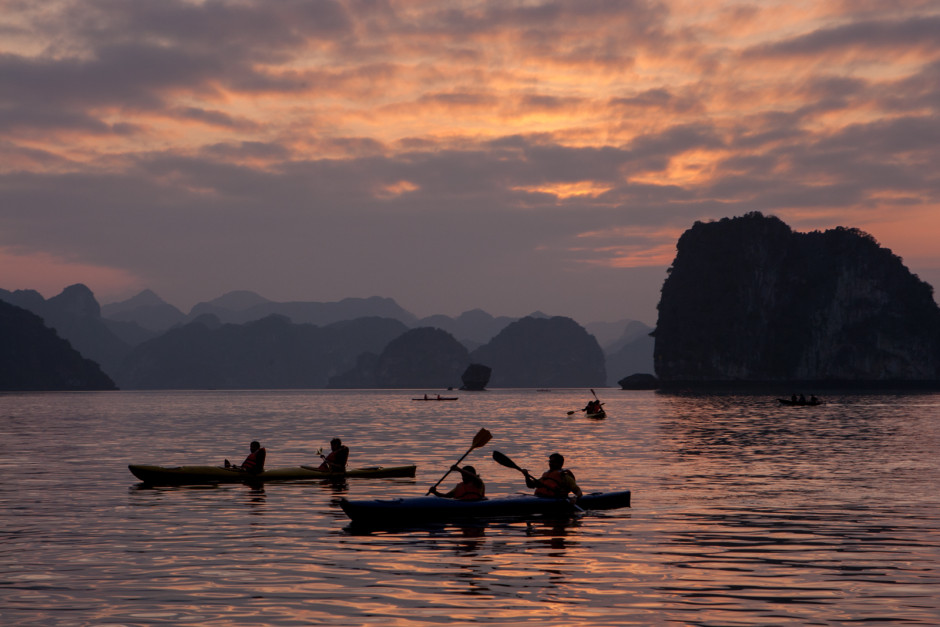 Ha Long Bay was one of a few epic places we visited while in Vietnam. Unlike Europe, the dollar goes much farther here in SE Asia, so we could afford to do some activities, like this multi-day sleep-aboard boat trip through the bay, which is scattered with thousands of islands and rock stacks. 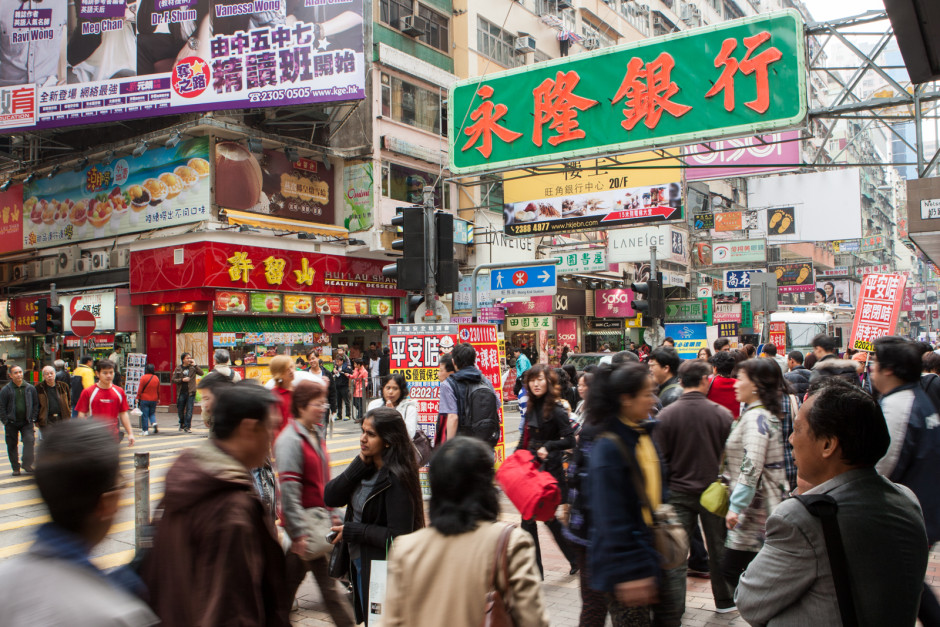 From rural Vietnam to the megapolis of Hong Kong , there are extremely different experiences to be had within one small corner of the Asian continent. Hong Kong offers an urban experience like no other. There’s something to do at all times of day and night, there’s a restaurant for every taste, and entertainment for any fancy. And with a clean and efficient public transportation system, it’s easy to navigate for foreigners. 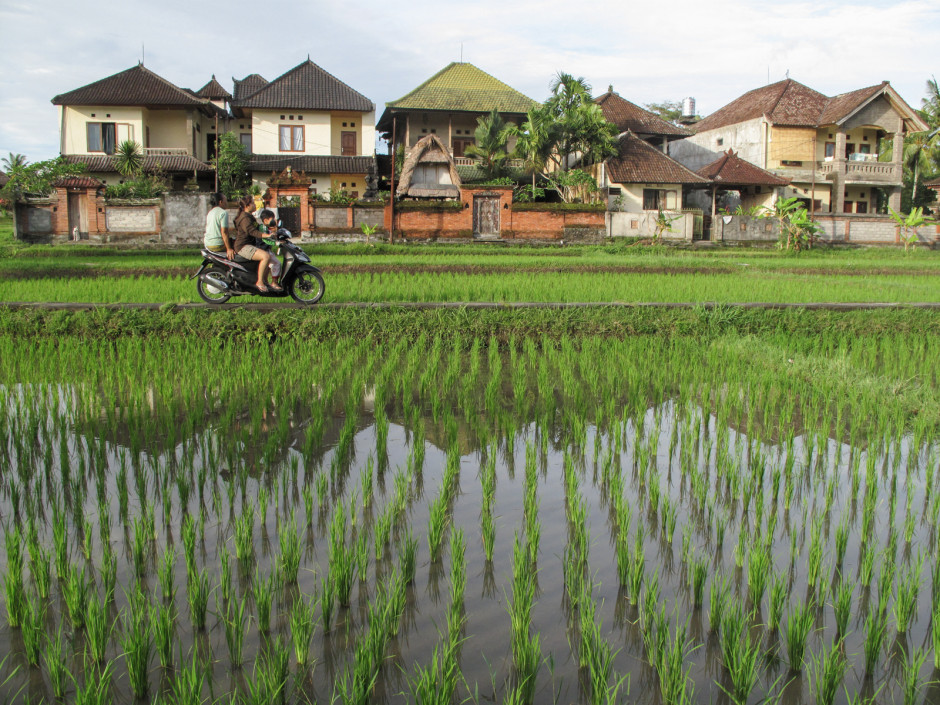 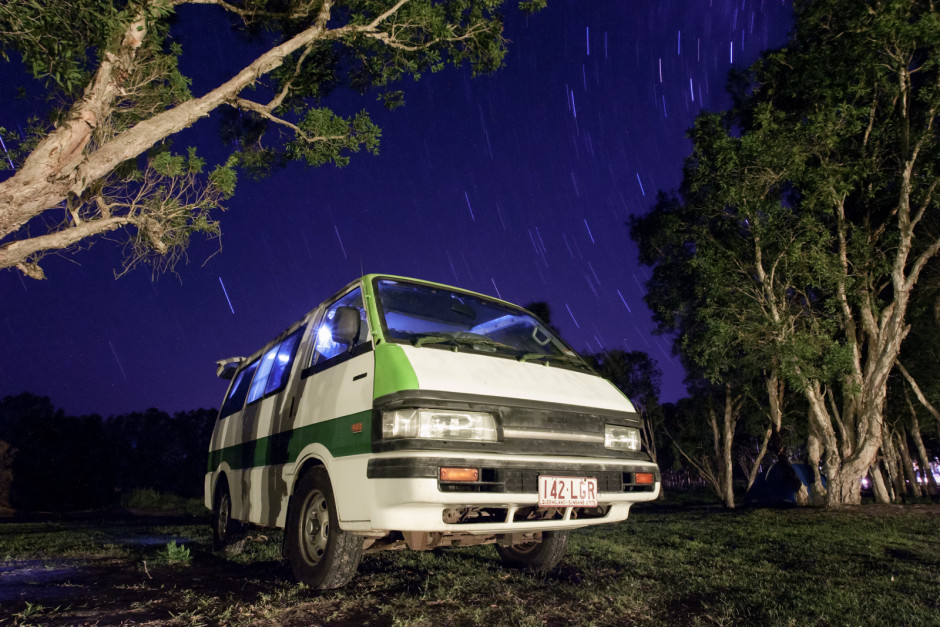 The best way to travel Australia for any length of time on a shoestring budget is by camper van. So we bought a converted passenger van, of which there are thousands on the backpacker circuit. For 2 months it was our home on wheels with a double bed and storage underneath for all our gear, supplies, and cookware. Ideally, we would sell our van for around the same price we bought it for. But that is in a perfect world. The reality is that these vans have a lot of miles, and ours ended up needing some repair work. 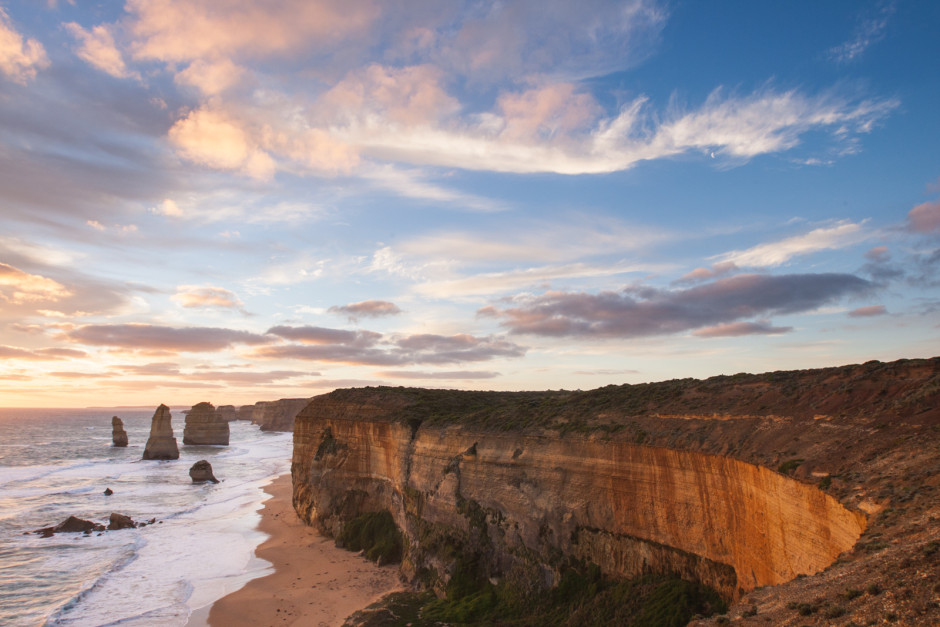 The Twelve Apostles, Victoria, Australia. Seven Apostles remain, but the name stands. One of many gorgeous stretches of coast along the Great Ocean Road. 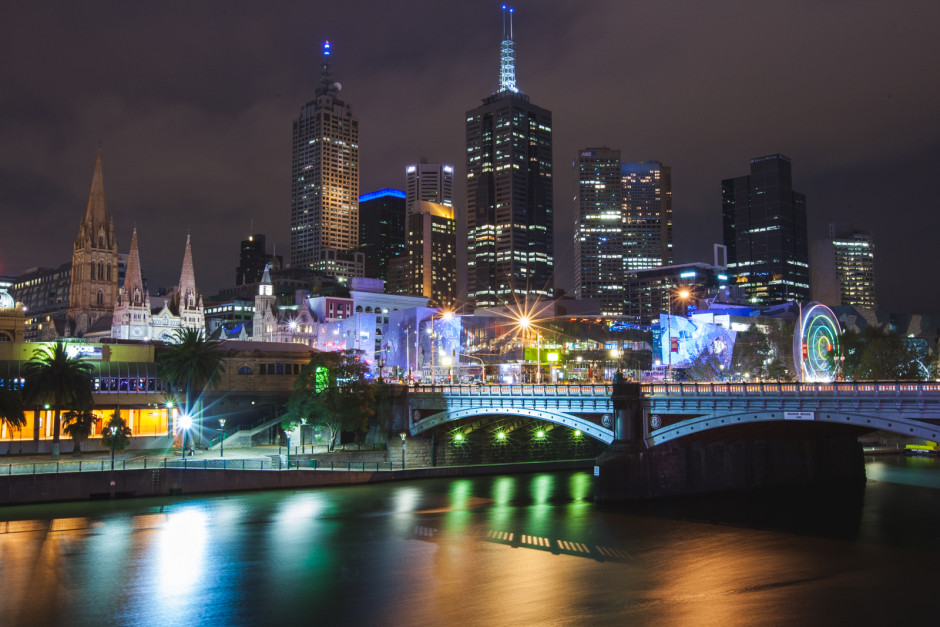 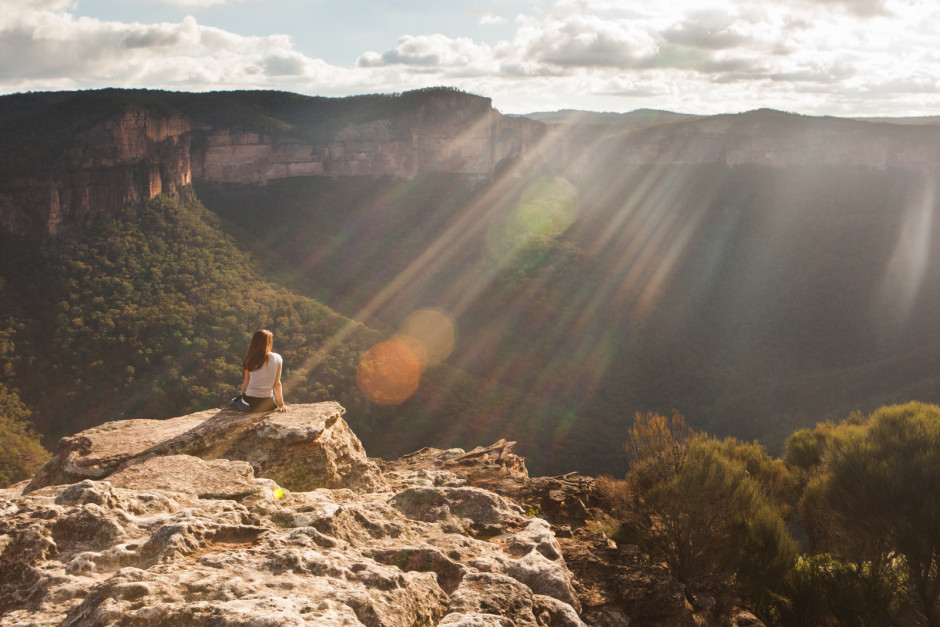 Just outside Sydney are the Blue Mountains, an amazing place to camp and enjoy the scenery. We found a spot to post up for the night in the parking lot of a scenic lookout. We awoke to this view. 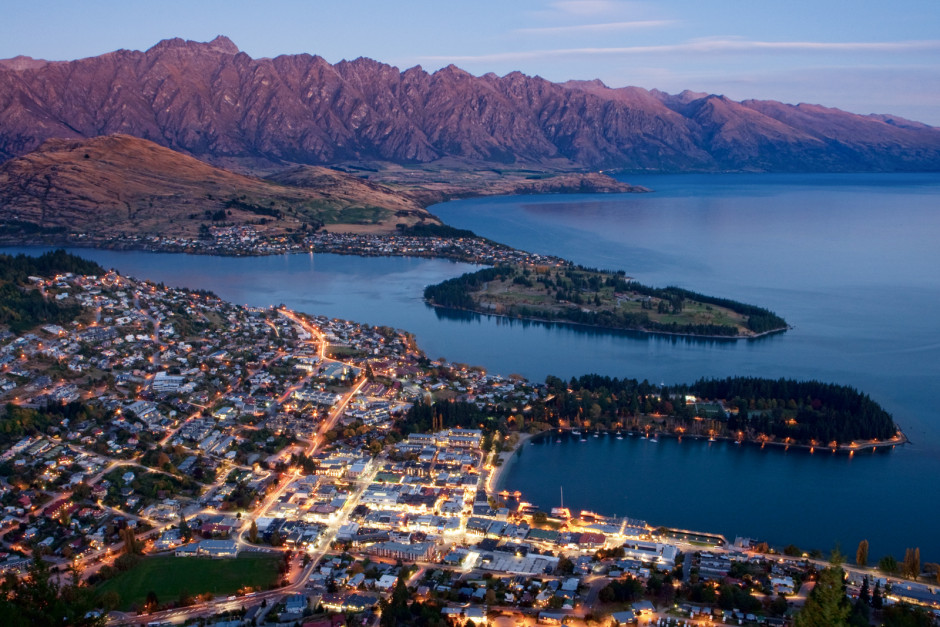 Queenstown, New Zealand, is the hub for a myriad of adventure sports and a major destination for thrill seekers traveling in The Land Of the Long White Cloud. 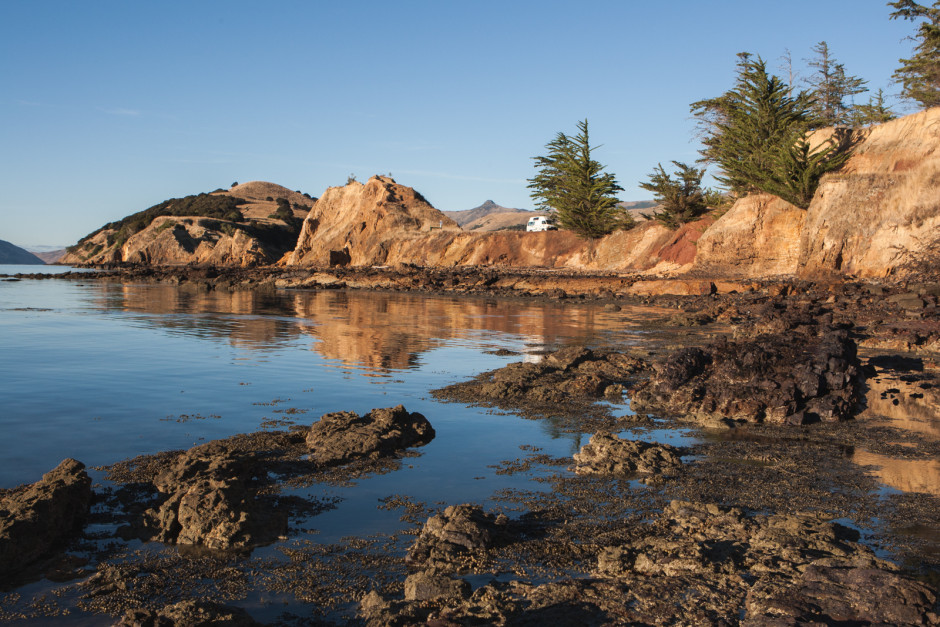 How’s this for a camp site? There’s a free camping policy in many areas of New Zealand, which will hopefully continue for years to come so long as the tourists respect the land. We couldn’t imagine a more picturesque place to wake up than this spot on the Banks Peninsula, South Island. 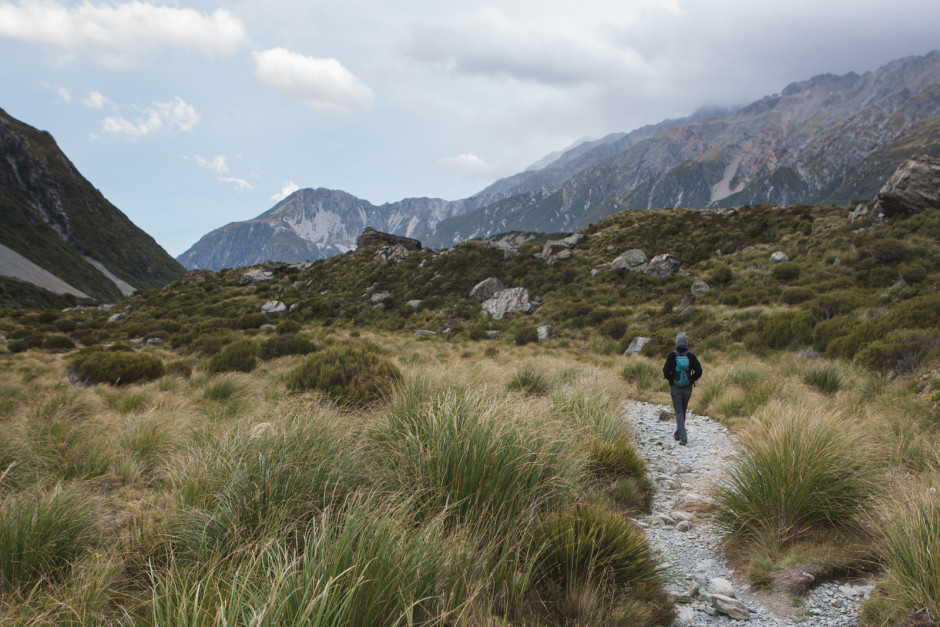 New Zealand has an extremely varied landscape. We chose the South Island for its ruggedness and large scale, but we are by no means adventure survivalists. There are plenty of hiking trails just off the roadside for regular folks like us. 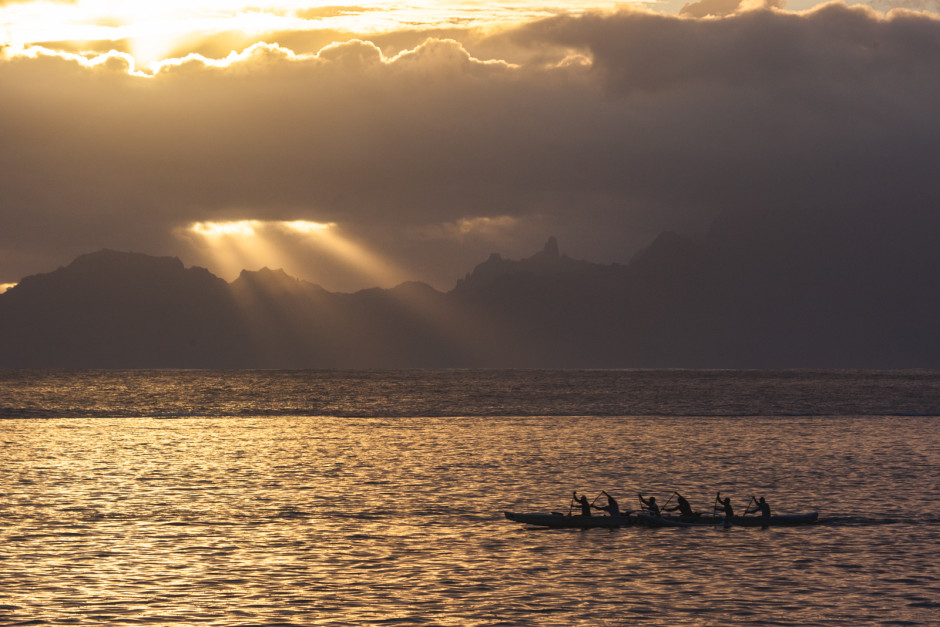 Tahiti was the last destination on our round the world honeymoon, and one of the most expensive as well. In hindsight that wasn’t such a good plan, since by the time we got there, our money was gone and we couldn’t afford to do anything besides paddle kayaks, snorkel, and enjoy the sunsets. Which actually isn’t such a bad way to spend the final two weeks of a ten month honeymoon after all.

How To Plan a Trip To Maya Bay, One of the Most Photogenic Places in Thailand

This Thailand Stay Lets You Hang Out Above The Clouds

This Thailand Island Resort Features an Outdoor Cinema in the Jungle