I THINK “WEEKEND WARRIOR” is an applicable term for me. During the week I do in-house photography, videography, and motion graphics for a company specializing in interactive installations. It’s based in the small village of Corrales, New Mexico (where horses outnumber humans), two minutes from my house. But where I lack a commute during the week I make up for on the weekends. So when I had the chance to shoot some campsites in Monument Valley (a good six hours from me, temperatures in the low teens, and only a weekend to do it) I knew I could make it work.

My friend Steven and I left straight from work on Friday evening and arrived at Valley of the Gods sometime after midnight. 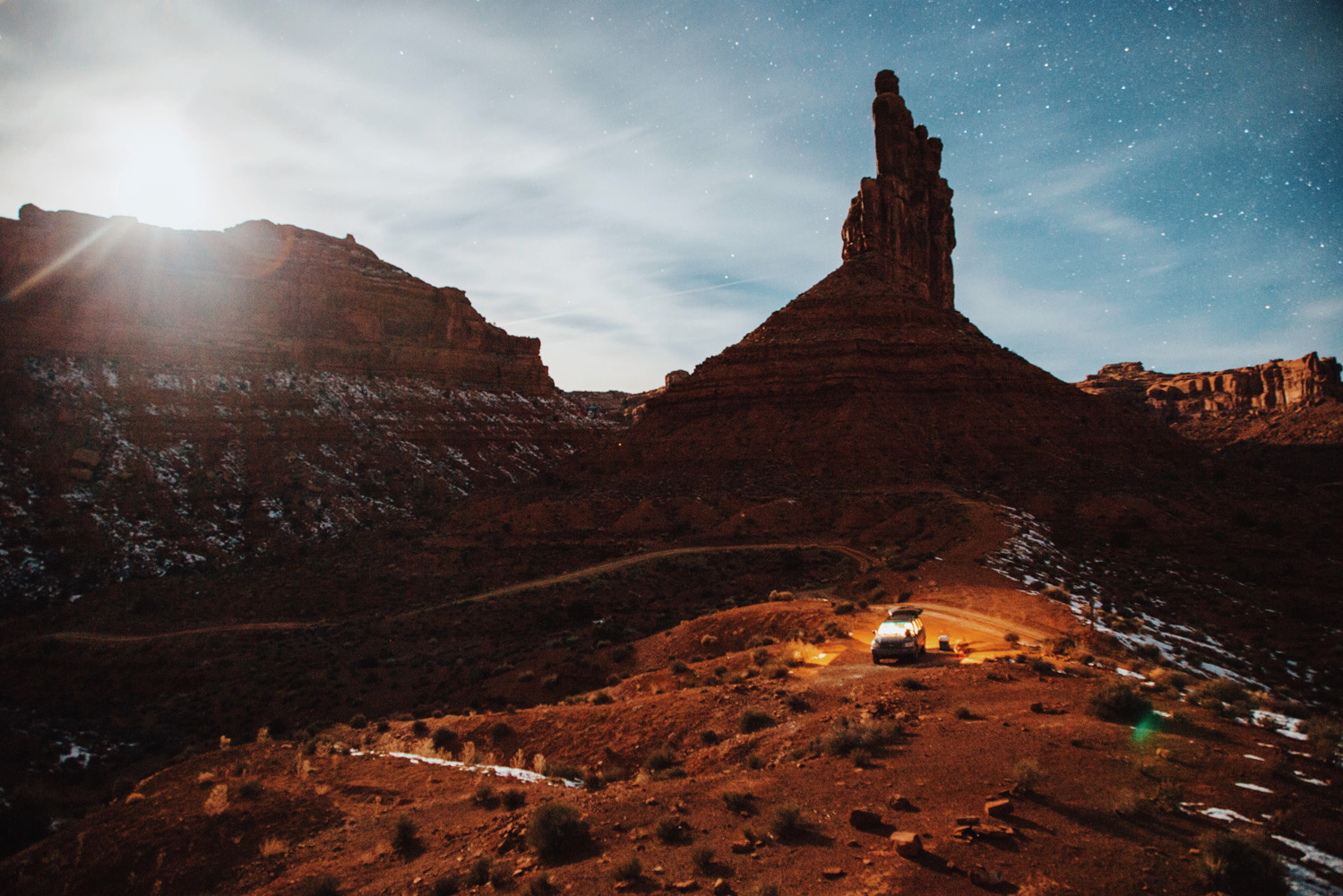 Catching a few hours of sleep on the first night

We caught a couple hours of sleep in the back of the car and I bounced right out at first light. I love the surprise of waking up to discover what kind of place I blindly got myself into the night before. And this was no disappointment. We hiked around until the Belt of Venus softened into a powder blue and then darted off for the road south. 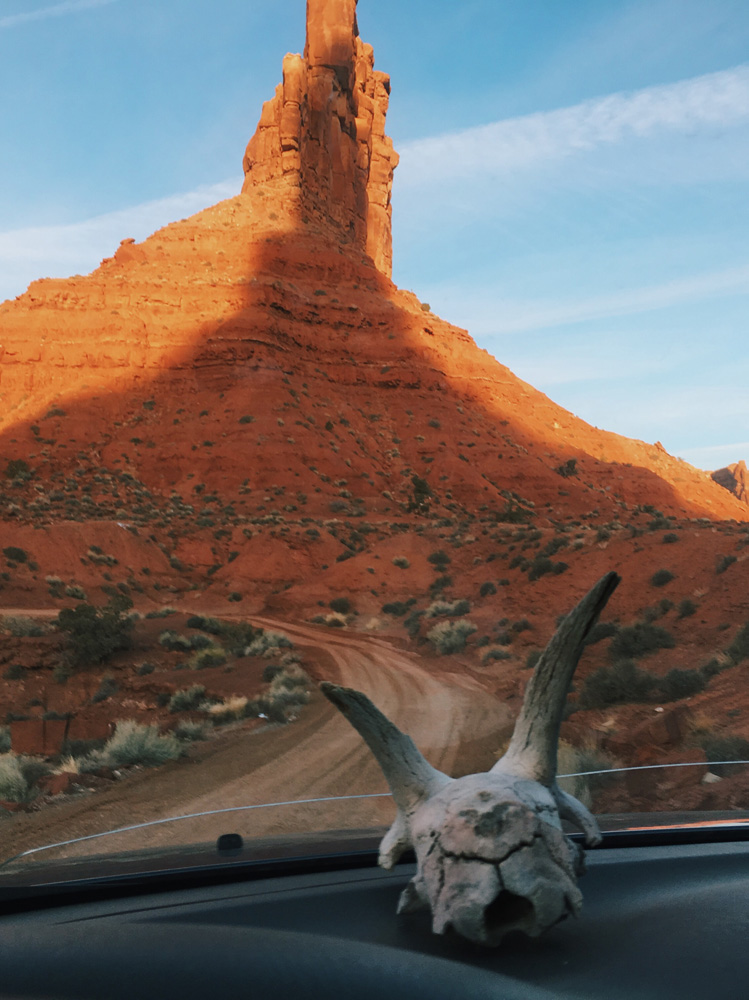 There’s so much to see in that area, and we had to pass up Moki Dugway for the sake of time but Goosenecks State Park was right on our way. We caught the tail end of that crisp morning light there, a brief encounter with a fearless crow and an unfriendly burro, and drug our jaws on the ground all the way to breakfast in Mexican Hat. 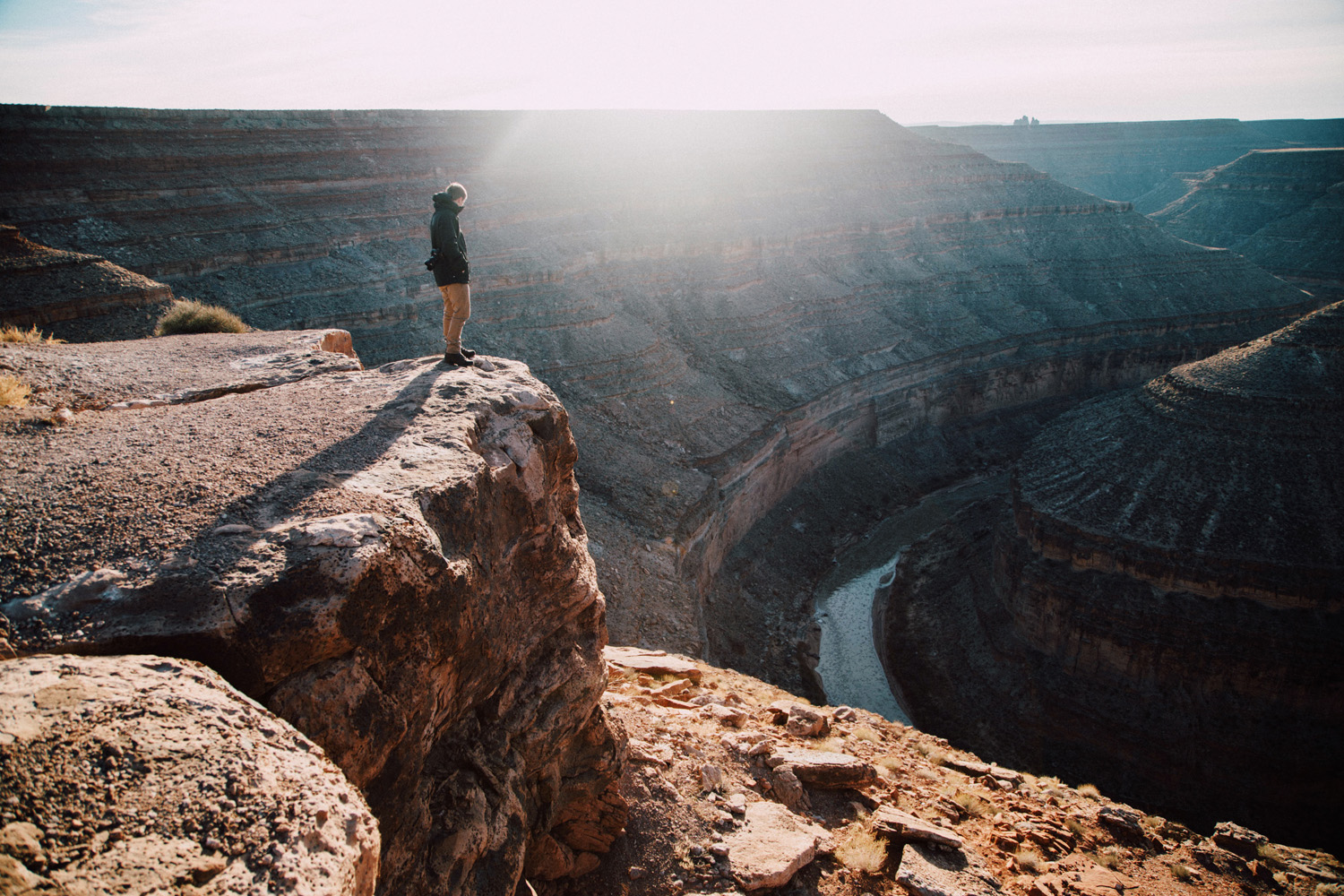 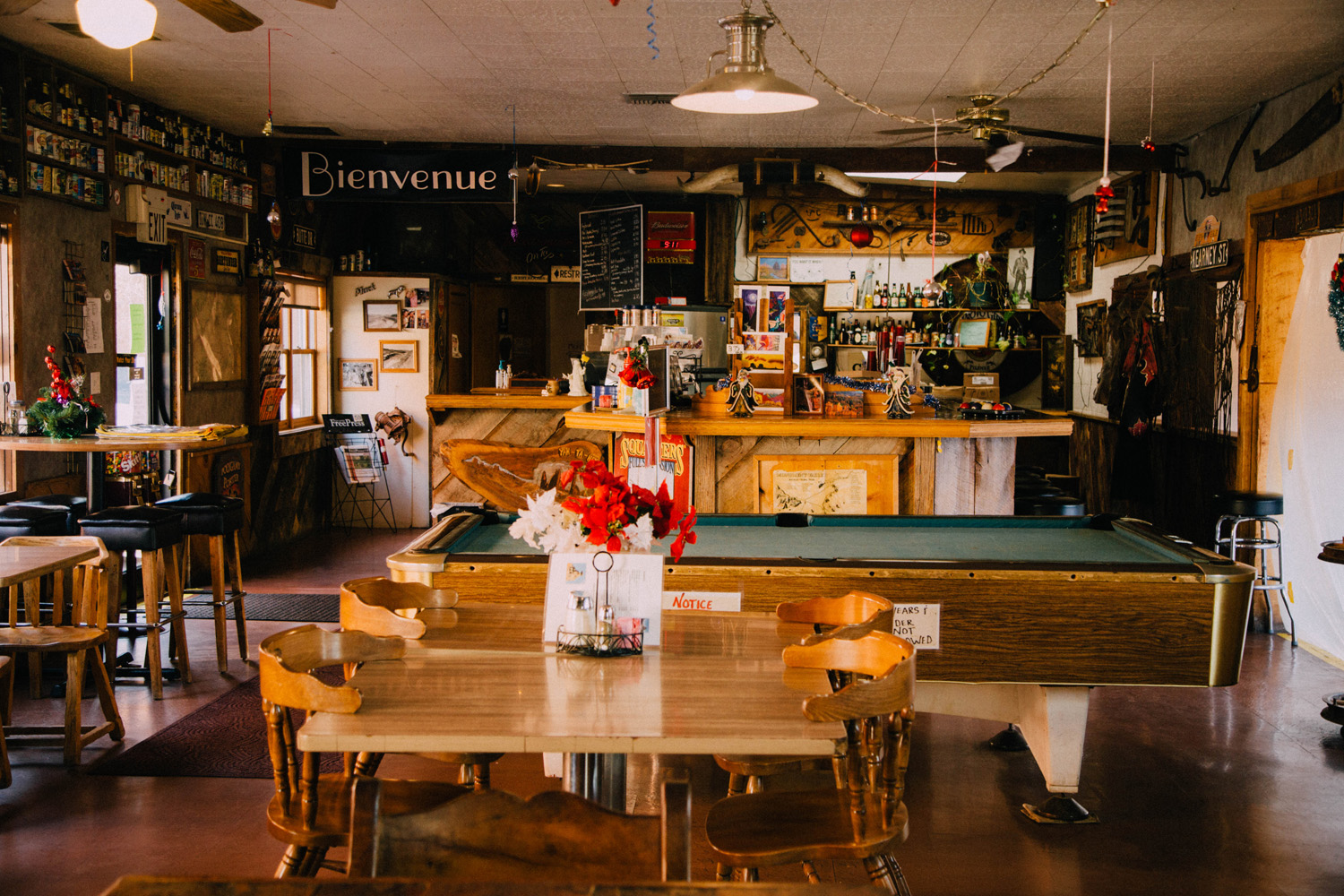 We arrived in Monument Valley around 10am and met up with our hosts, Mark and Jennafer Yellowhorse, at the Holiday Tribal Park campsite. Beyond a few main roads, all the land on the reservation is private (and roads are unmarked) so you’ve got to either know somebody or hire a guide to get around. I thought they were just going to show us where the campsites were and that would be that, but they had a lot more in store for us. 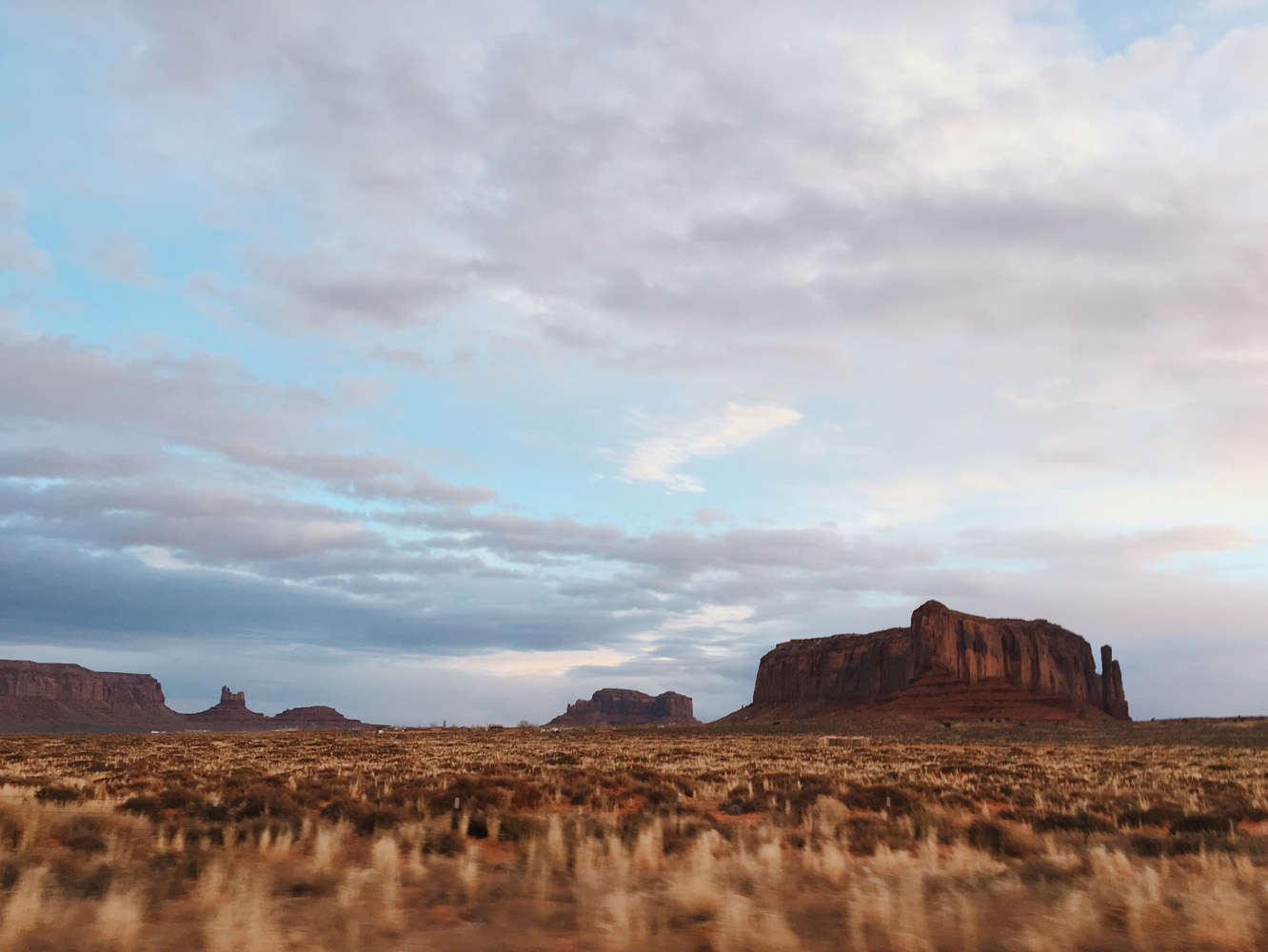 We followed their SUV down sandy dirt roads through this unexpected landscape that hinted at Moab, Canyon de Chelly and Sedona alike but with a breath all its own. They took us to a hidden frozen pond, then up to Teardrop Arch and further around to some Anasazi ruins tucked into a cave up a cliff wall. You’ve got to crawl and squeeze through a small hole to get close to them and, on account of a lady who had popped out of her shirt in the process before, Mark was sure to be the last one in the group to go through. 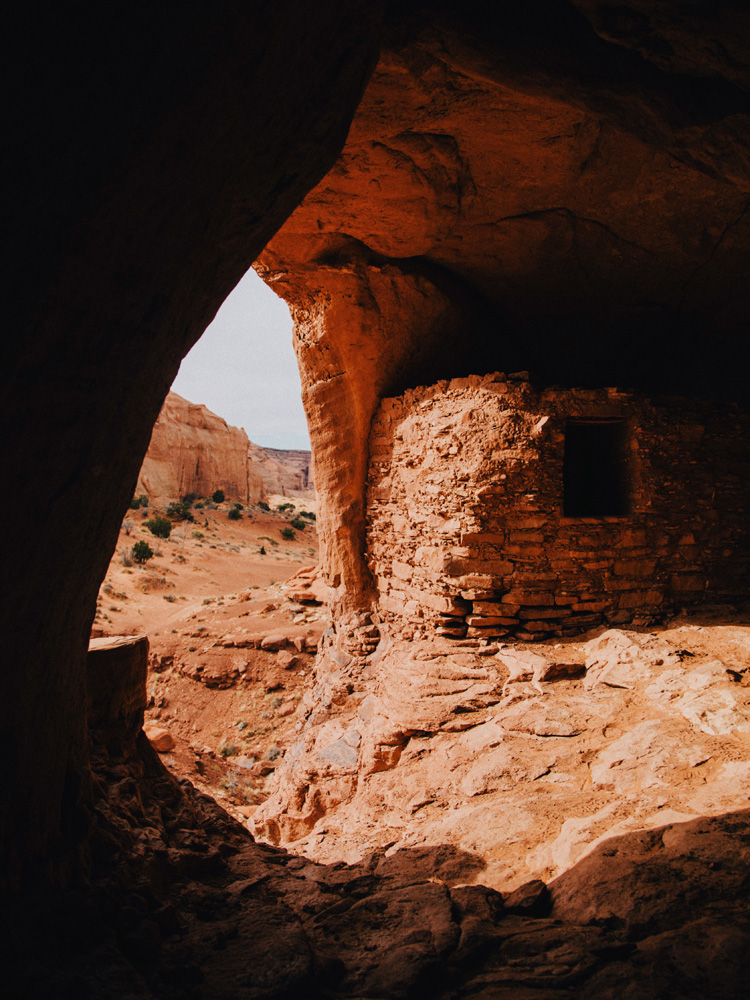 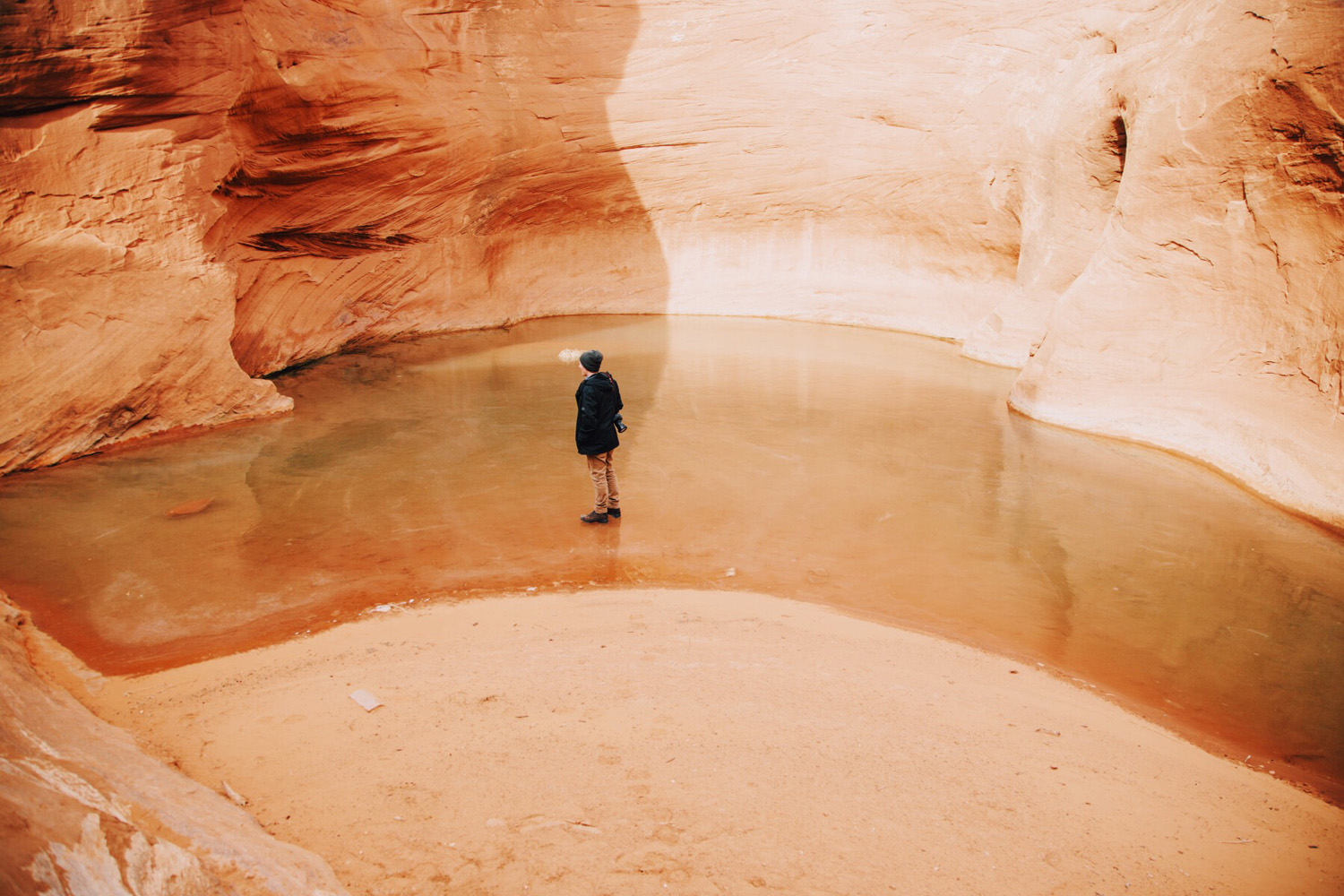 My car had passed all the tests so we got on some other back roads and headed south for Boot Mesa. At the base of the mesa Mark had hand-stacked rocks to create a small shelter from which he could comfortably watch his sheep while they grazed in the fields below, all done with a smile no doubt. I was totally impressed that he put the whole thing together himself, and it also spoke of the bigger picture of their lifestyle out there, and the attitude and resilience it takes just to get by. The land has shaped its inhabitants in the same way the elements have crafted the rock into awe-inspiring formations.

Of course then he took it up another notch by taking us across the road to his mother’s house, who was herding her own flock of sheep. Jesse has never had running water in her life and, even in her old age, I’m certain has never missed a beat either. With very little English she welcomed us into her home and began making us frybread. We ate our fair share and warmed up by the wood stove while watching various movie scenes shot in the Valley on DVD. 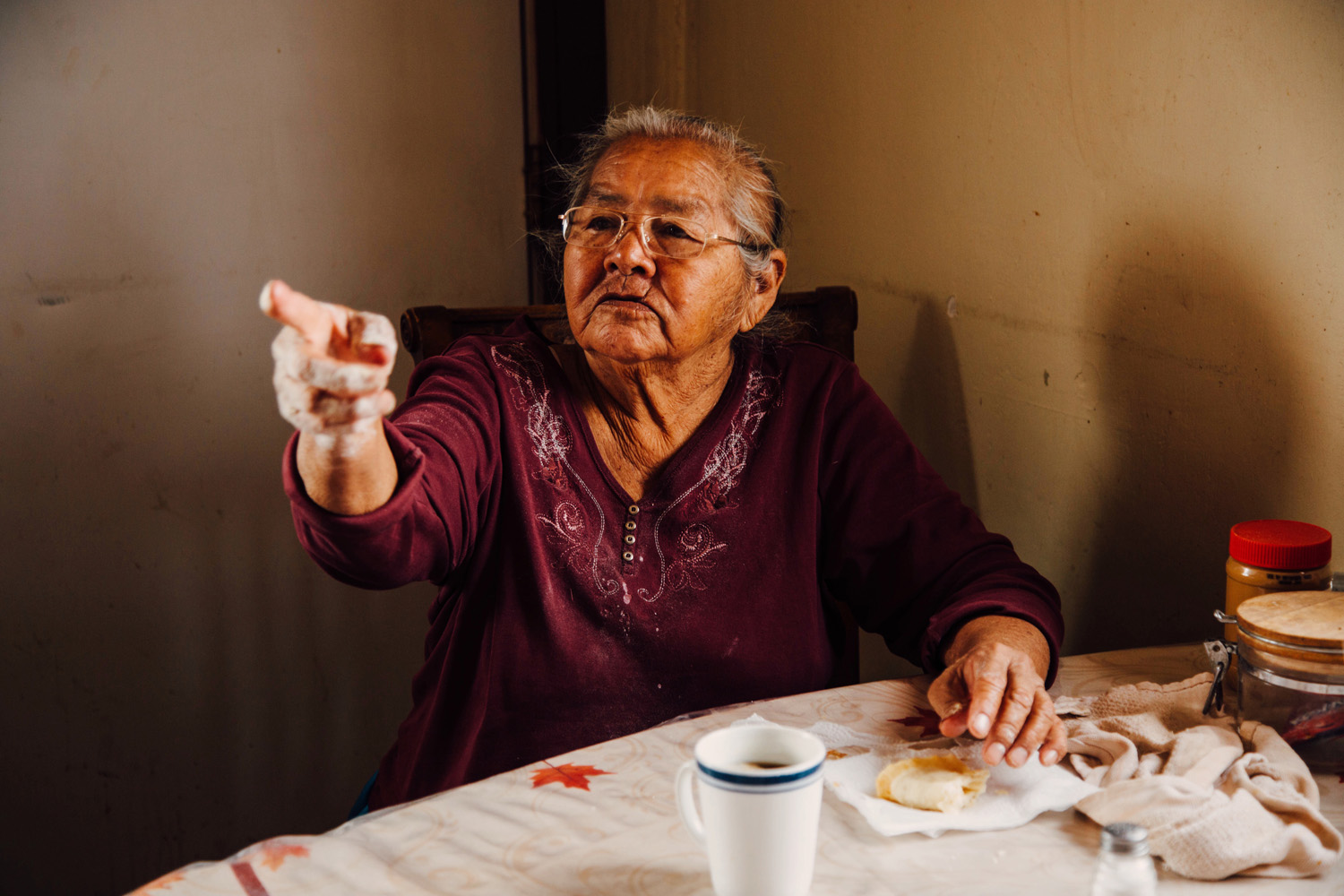 Steven and I slipped out back to check out the sheep pens and set up a few camping options. It seems like they just have a ton of amazing land and are open to guests utilizing it however suits them best (some people even sleep inside with Jesse). In the summer there’s a garden and a small stream running behind the house; it’s a truly serene setting. 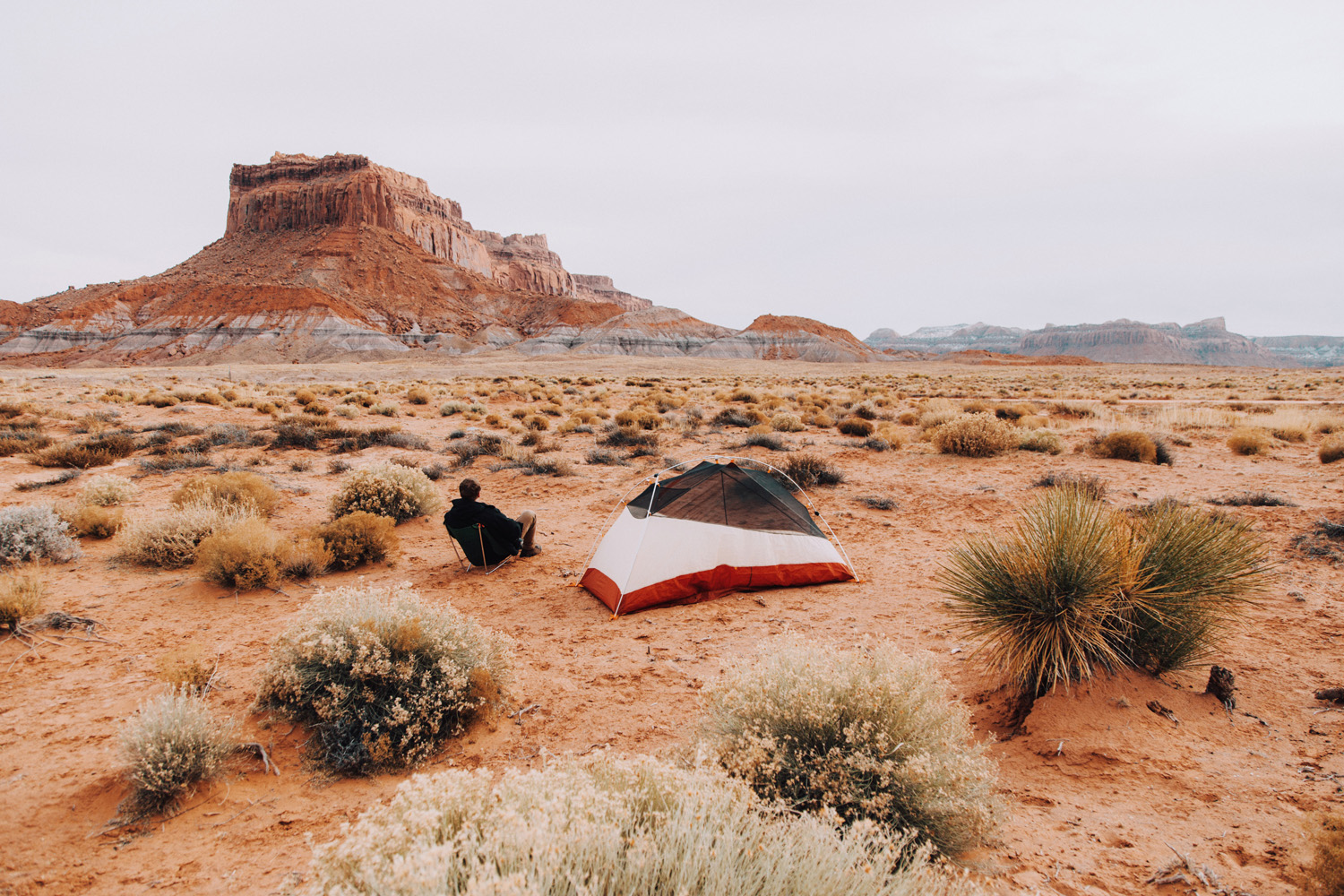 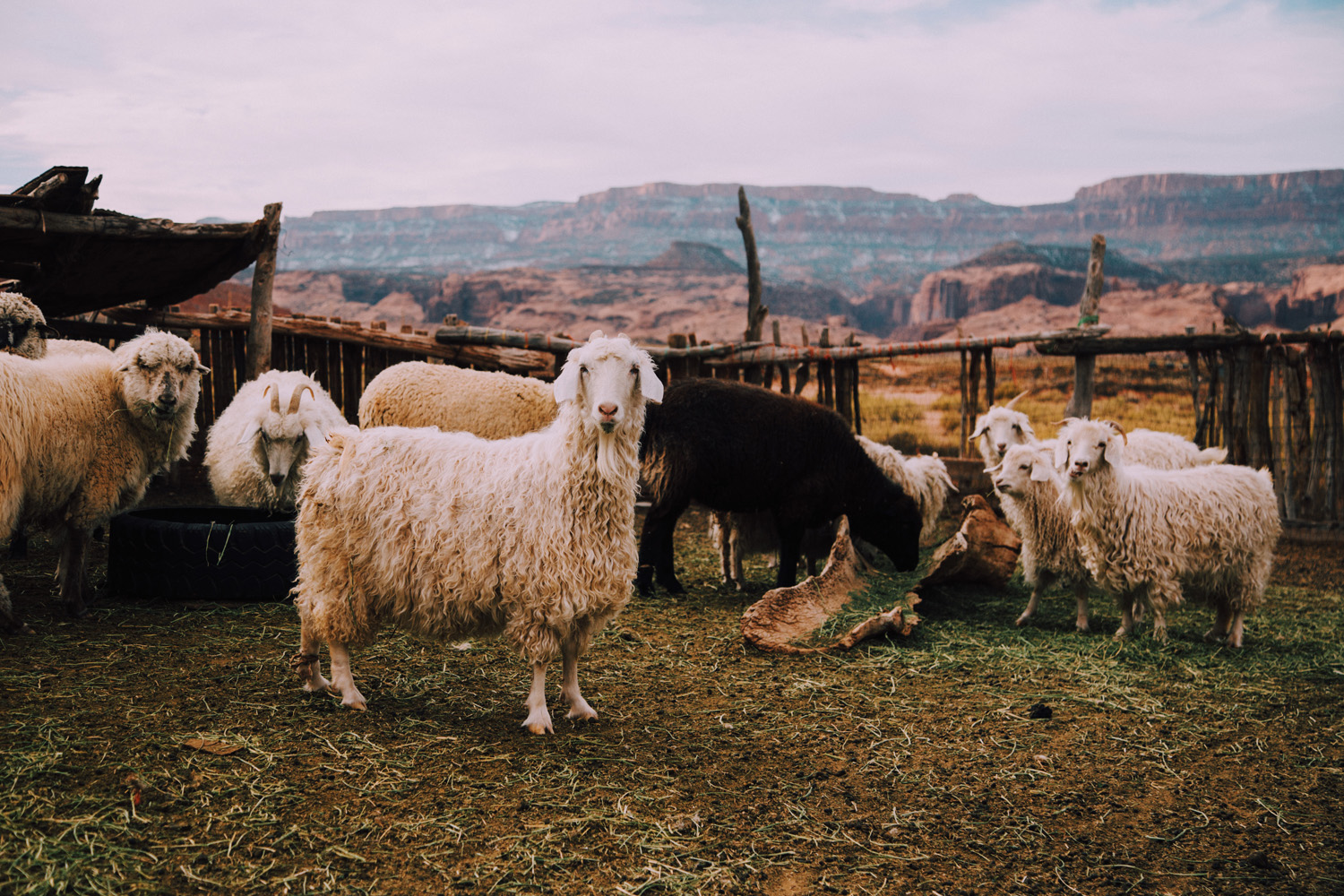 With bellies full and hearts and bodies warm, we continued south to El Capitan Valley, where Mark and Jennafer live. Agaltha Peak, also known as El Capitan, is an old volcanic plug and impossible to miss from miles away. We pulled in and drove past the behemoth to get to the Upper Monument Valley site. 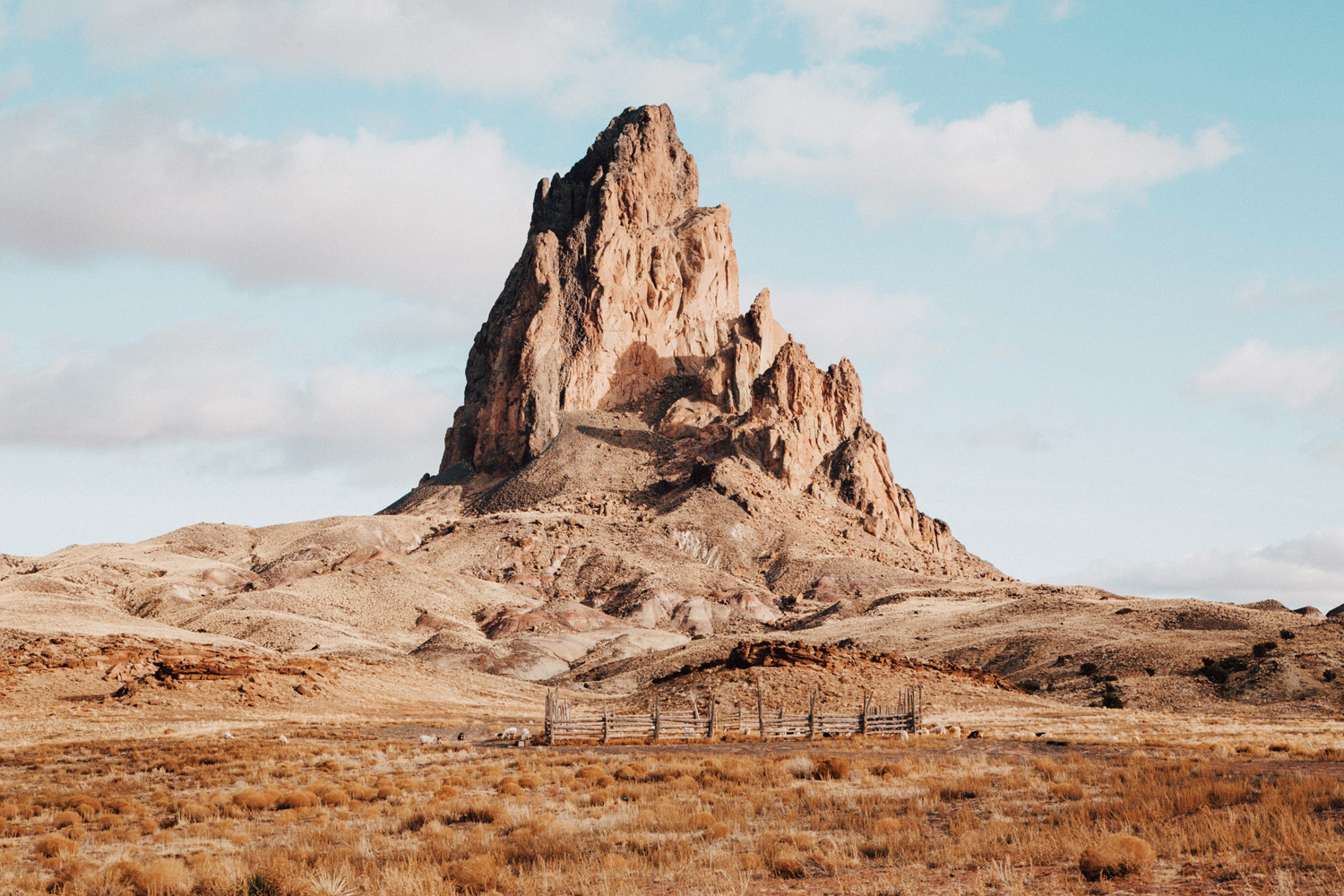 Agaltha Peak with sheep at its base

It’s a really incredible view and I’m so glad we made it there by sunset. It had been overcast all day but the clouds broke for all of 20 minutes right before the sun hit the horizon. And everything lit up. We could see all of the monuments, and another range of mesas, and El Capitan towering behind us. The Yellowhorse family had already gathered wood and started a fire before I could even find a lighter. Steven made some udon soup and Jennafer told us a bit more about the work she’s been doing. 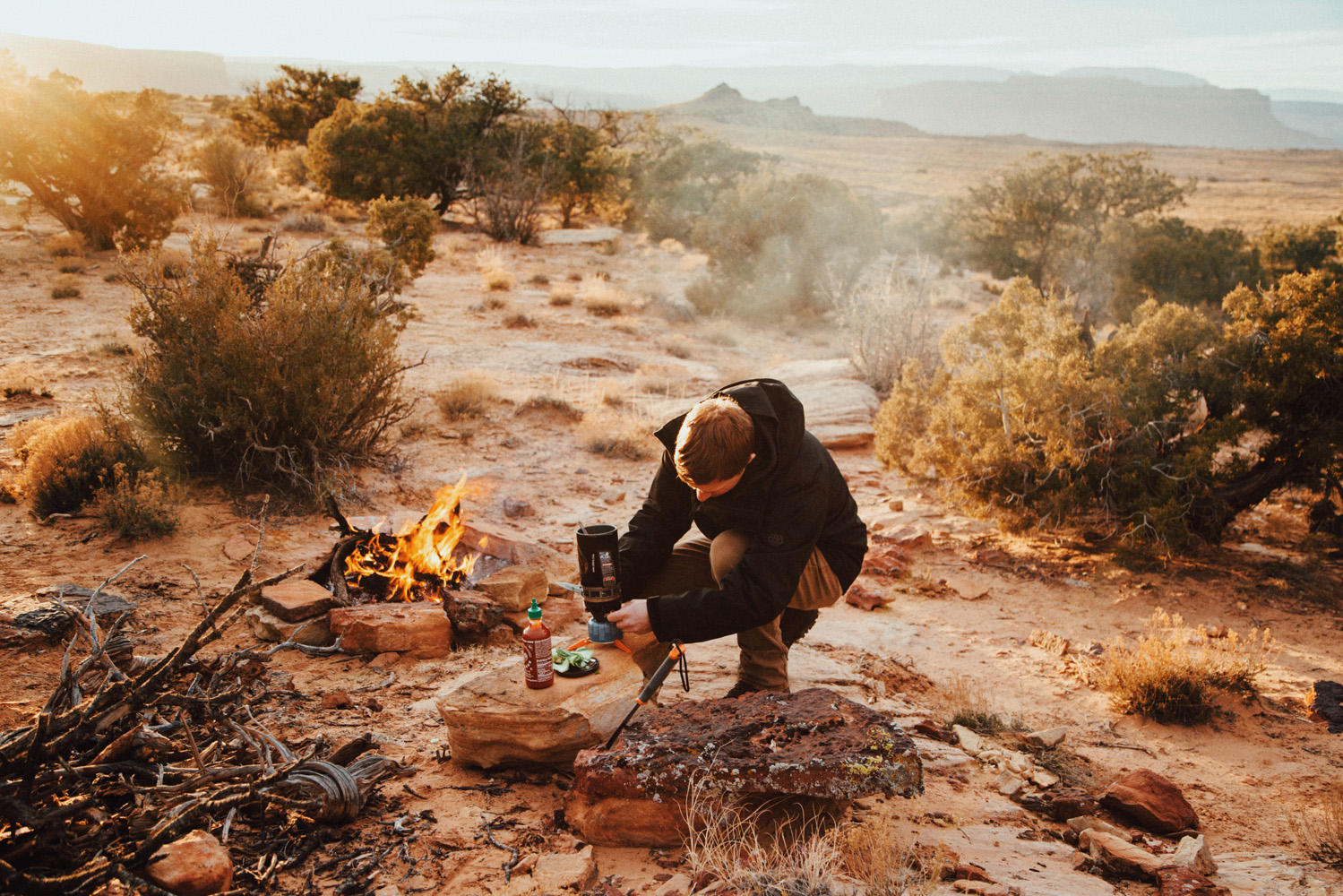 One of the things that stuck out to me was how she’s helped to provide a voice for her community (many of whom don’t have running water or electricity) in dealing with issues like uranium mining and contamination, and land and artifact rights. She even teaches people in her community how to set up solar power in their own homes. And she is showing them that there are other ways to live off of this land that do not involve selling it to be mined. Jennafer is passionate about protecting the rights of the Navajo and it’s pretty amazing that you can help support that too, simply through the act of camping. 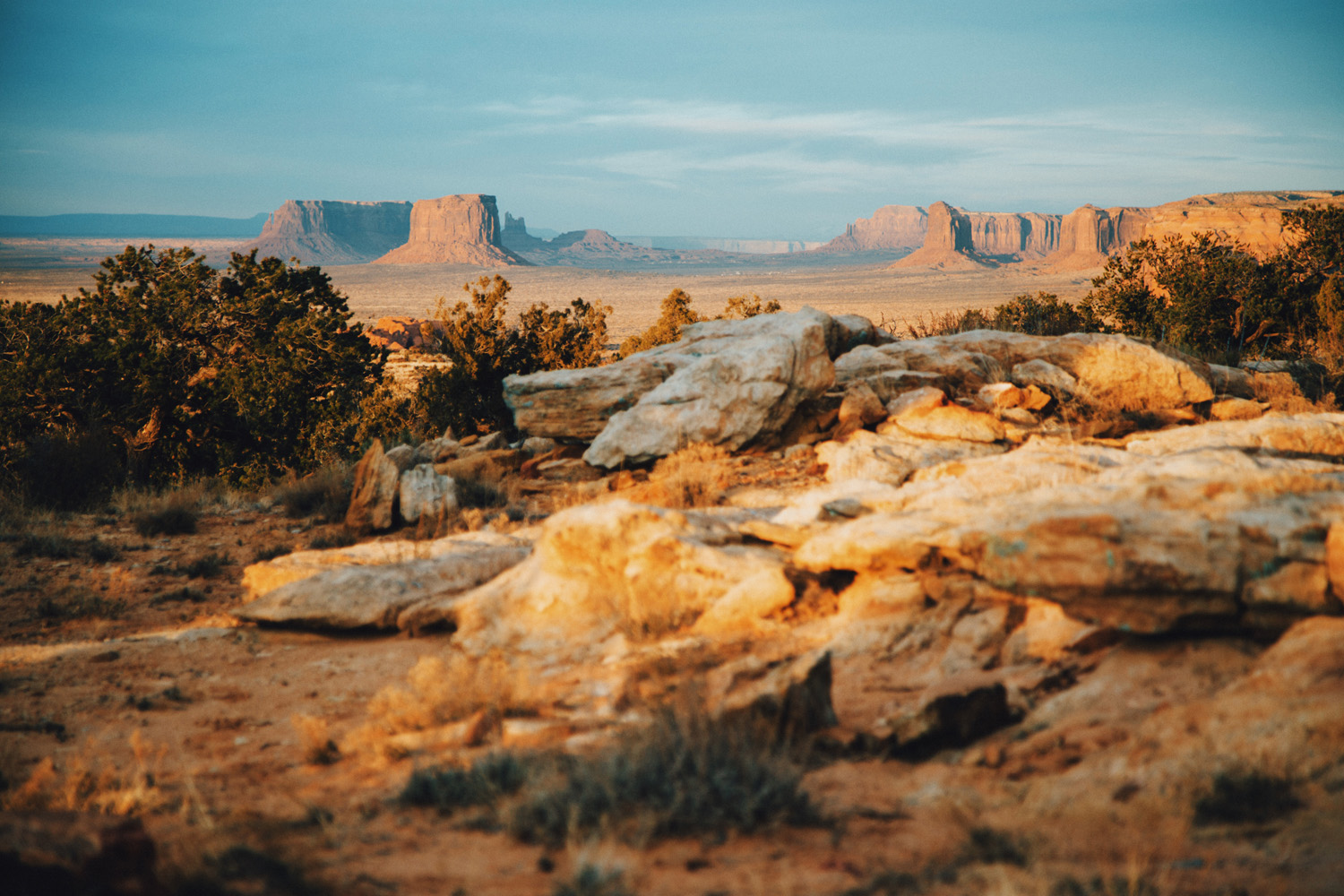 Looking down the valley from the Upper Monument Valley site

We let the coals die and headed back to Holiday Tribal Park, where we would stay the night. This is Mark’s brother John’s property. He kindly offered to let us stay in the solar trailer instead of our tents and, given the wind and maybe 10° we had outside, it was a hard offer to refuse. So we all made a jerky/chocolate run to Mexican Hat together and shared laughs in the trailer while the heat kicked in. 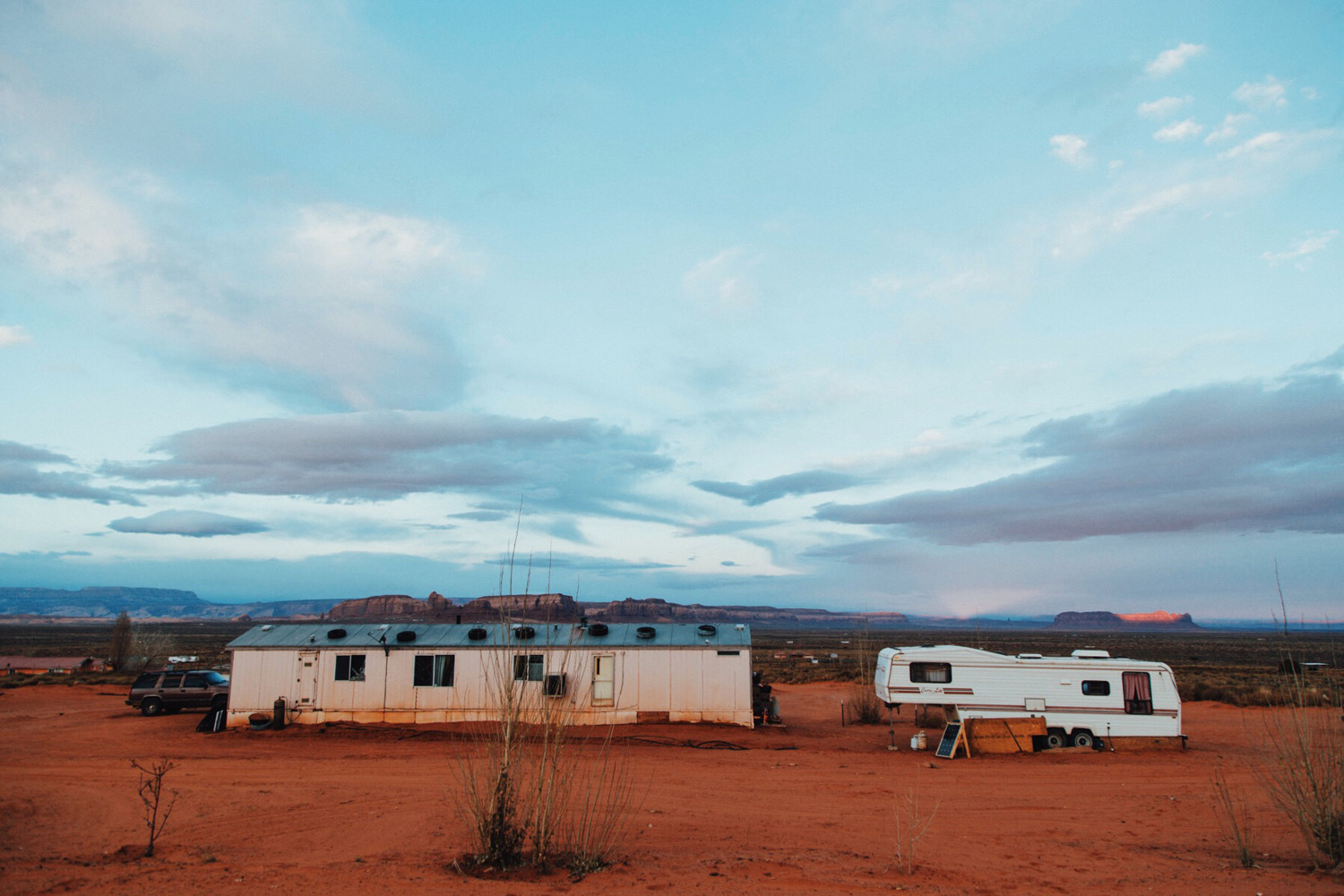 John’s trailer on the left, solar trailer we slept in on the right

In the morning the air was still, and much warmer, and fiery pink. Steven and I made a quick trip first thing to the visitor center to shoot a few photos, then back to camp to make breakfast. The fire pit was already stocked with wood and kindling and set up so perfectly like candy on a pillow. 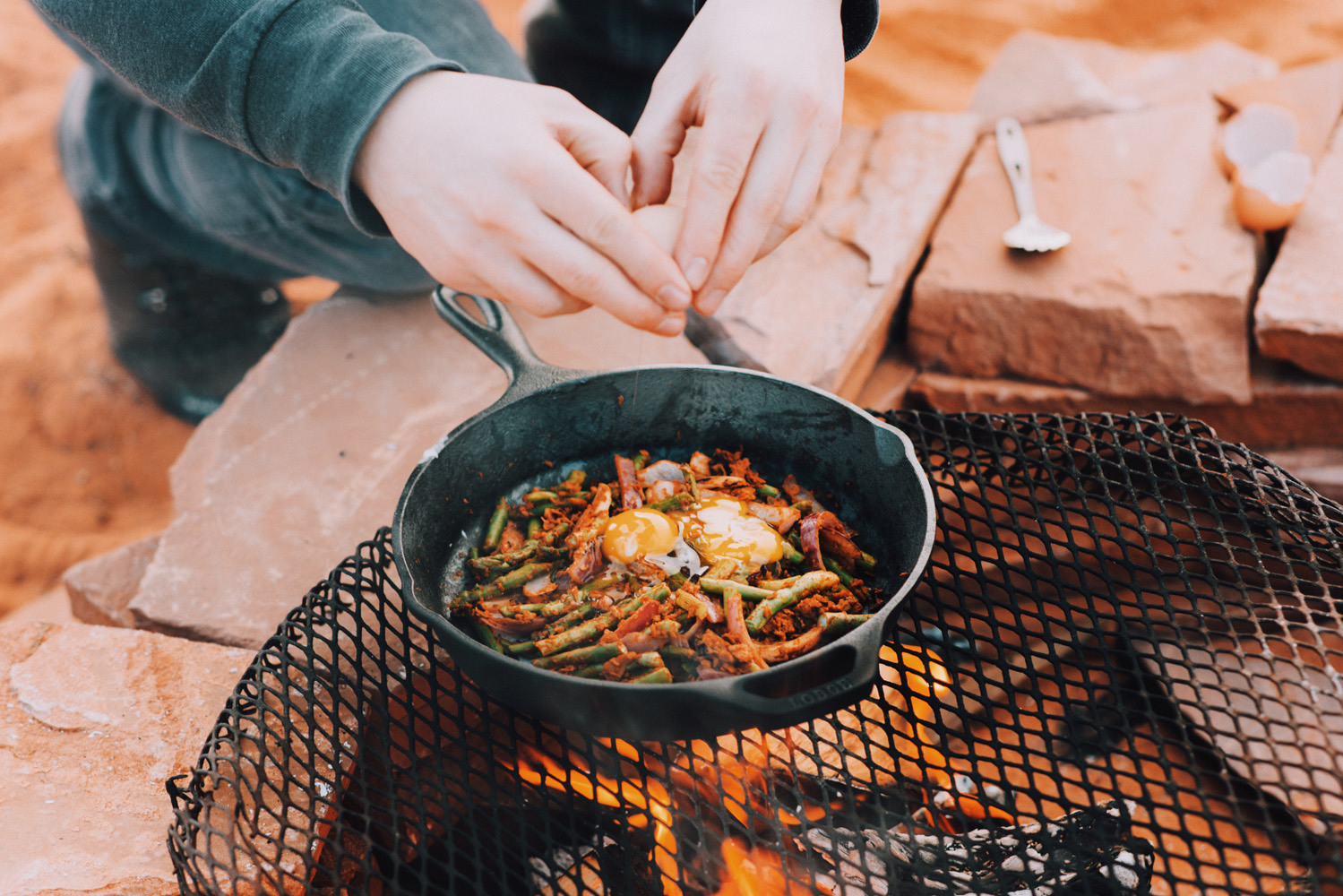 John surprised us by setting us up with a trail ride that morning on the north side of the valley. I had told him that I was looking for something a little looser than the average nose-to-tail experience and that is exactly what I got. For hours a pair of dogs and our beautiful, mildly trained horses battled freezing wind, crumbling cliff edges, and steep dunes while we teetered along behind our Navajo guide, Herbert. It was fierce and rugged and unpredictable (50% just holding on and hoping your horse had your best intentions in mind) and then it would open up into an endless vista and you could get the horses running. The whole experience was unforgettable, just the right amount of fear coupled with excitement. 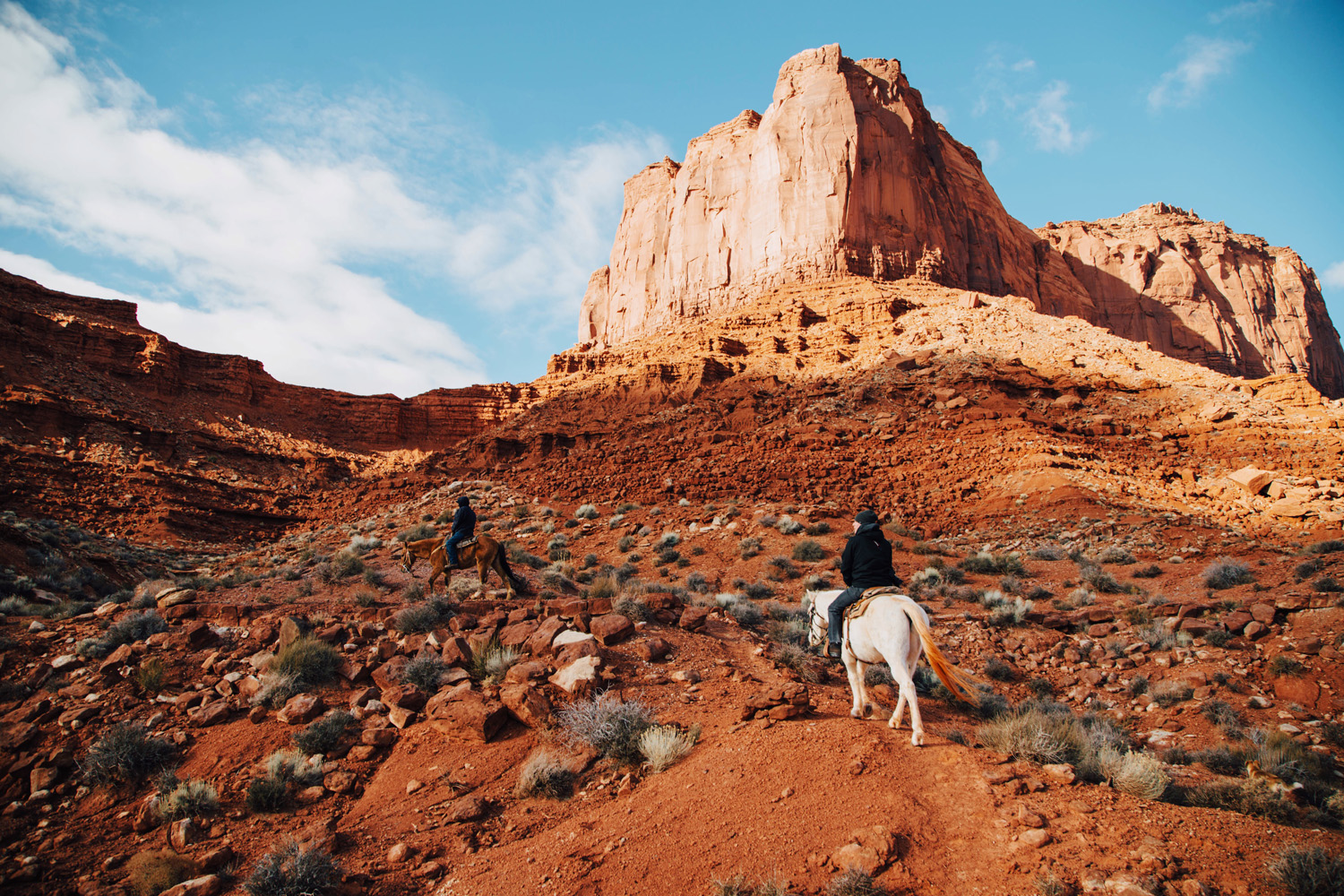 Herbert and Steven on horseback

When that was over we drove back down to El Capitan Valley to check out the remaining campsites. El Capitan Valley RV Camp was a totally isolated spot overlooking Agaltha Peak and the lake below. It’s all very open and wild and peaceful. 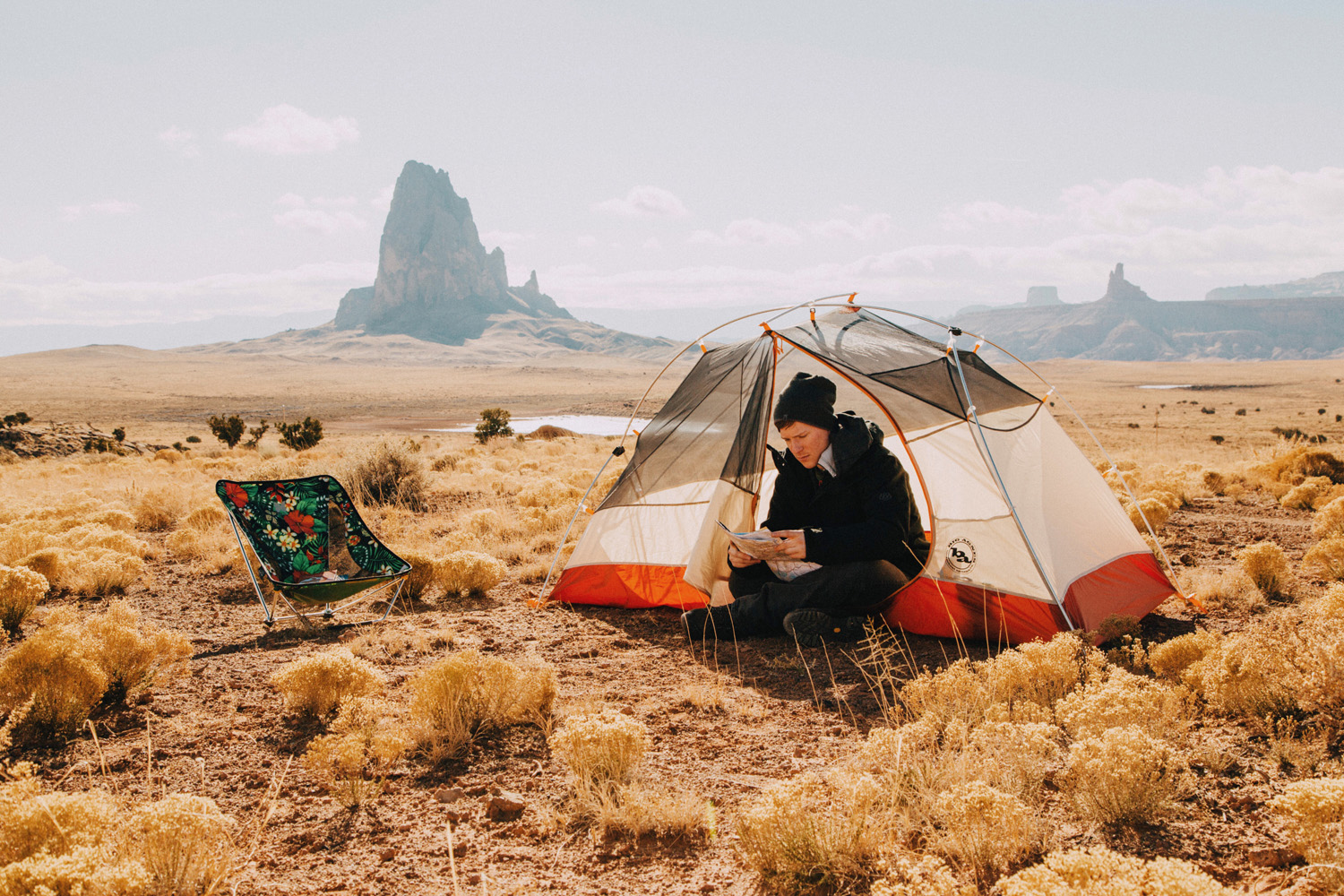 Then we drove up and around to Blackrock Overlook. The family’s rock quarry is there and you walk a short ways past it to get to the site. This one has another crazy 360° view. You’re flanked on all sides by full views of the Valley, all the mesas to the west, Agaltha Peak, and these crazy swirling bulbous rock formations. 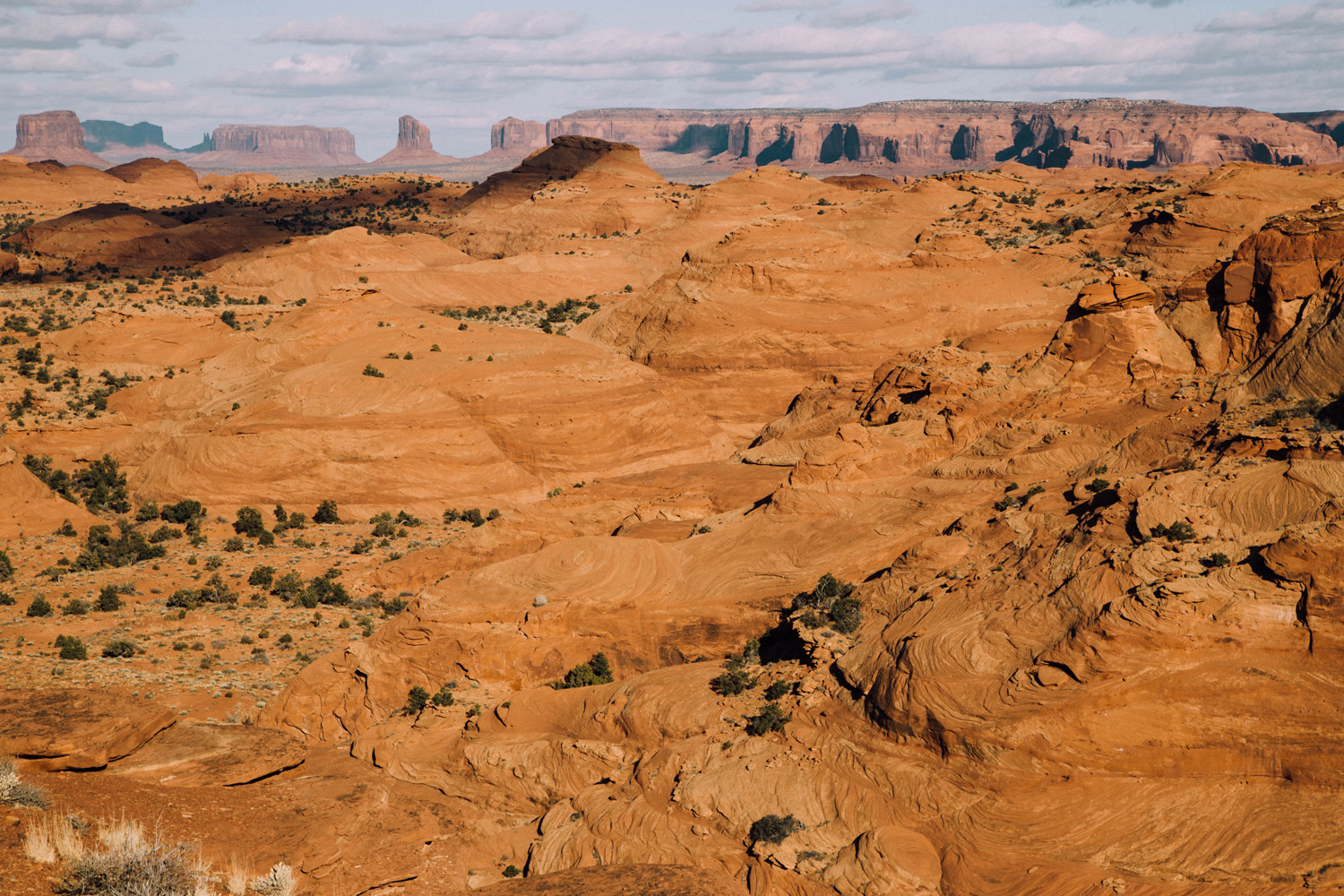 On the drive out we pulled over for a wild horse. Jennafer noticed it behaving oddly and determined that it was probably hallucinating from locoweed. We tried to give it some water (it would die if it didn’t drink water soon) but it wouldn’t take any, wouldn’t even eat a carrot. That was a hard sight to drive away from. 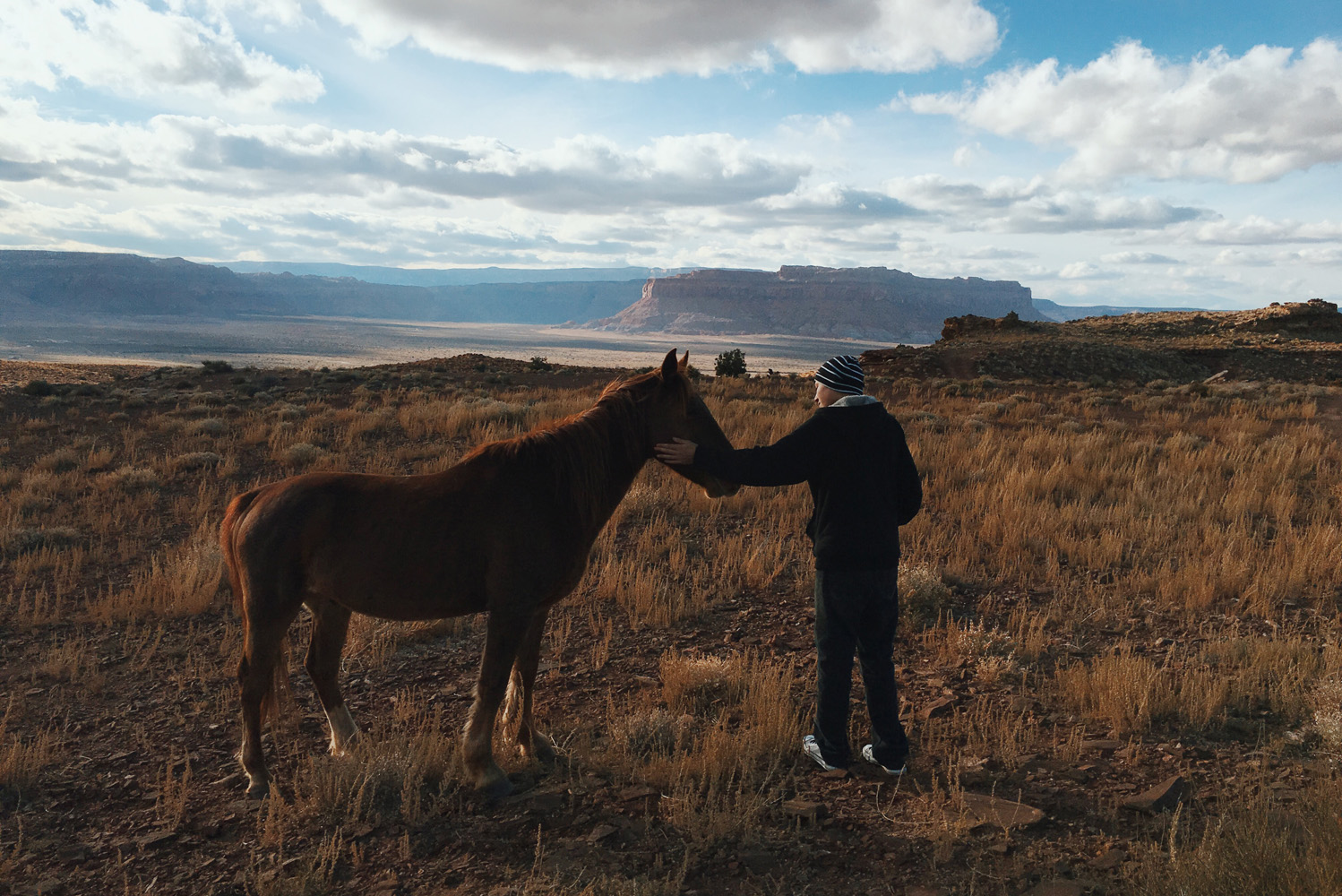 Wild horse on our way out from Blackrock Overlook

Before we knew it the sky started to turn purple, we all shared goodbyes, and Steven and I were finally on the road home. We made one last stop at Canyon de Chelly with only a few minutes of light to spare (which did it no justice but certainly solidified a need to return). 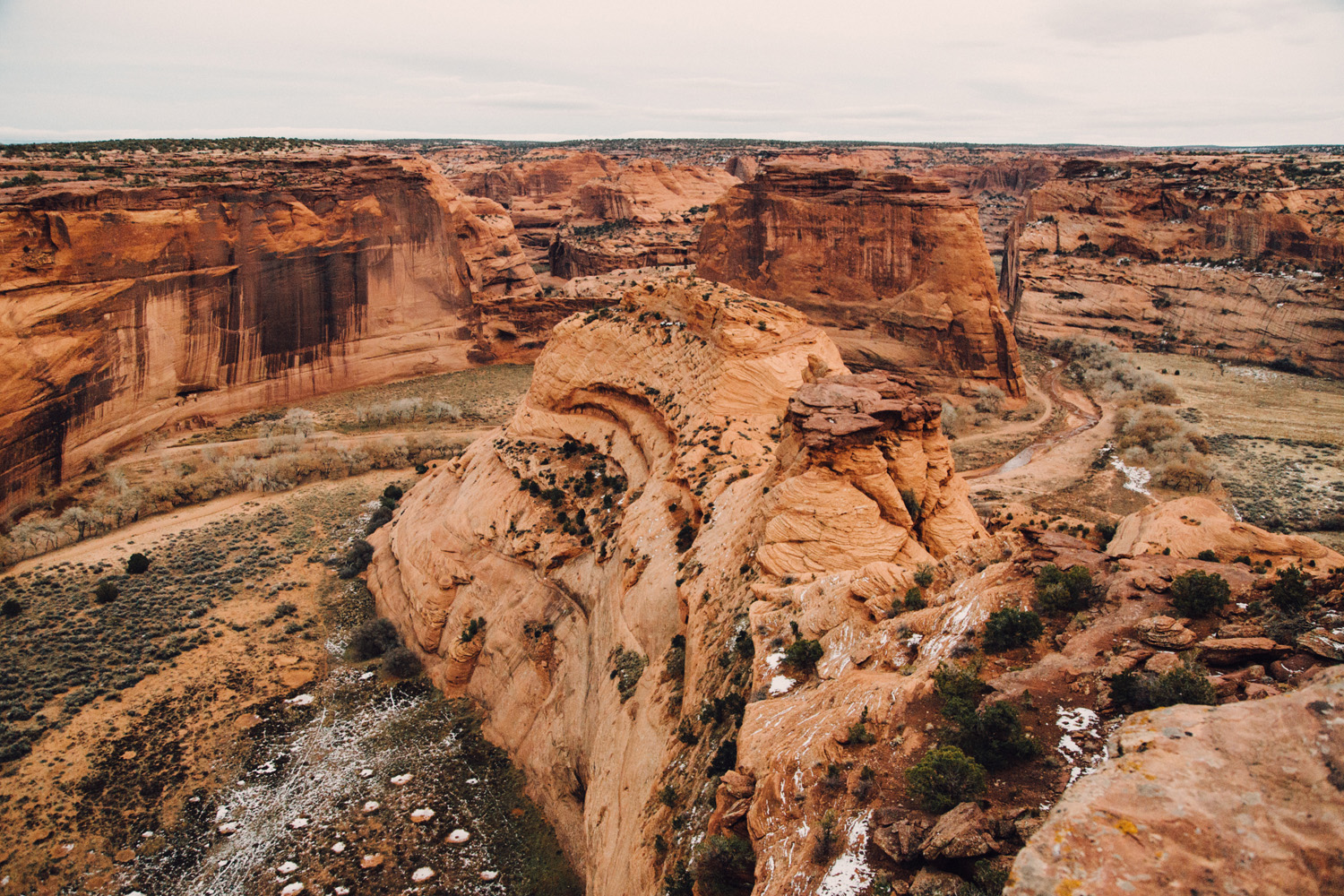 After a stop for enchiladas at a hotel in Chinle, we thanked our lucky stars that somehow we were going to be home before midnight, so content having touched one of the few wild places left in this country. The same rugged isolation that makes the desert just barely livable is also what keeps it (and the people that endure it) so special. It’s not for everyone, and certainly not for the weak, but I’ve found a piece of home there.

Tagged
Camping Photo + Video + Film
What did you think of this story?
Meh
Good
Awesome