EVERYTHING THAT MAKES winter in the Adirondacks so wonderful is on display in New York’s Schroon Lake Region. Granted, in the winter you can’t actually get in the lake waters, but the cold brings so many other ways to spend your time.

The town of Schroon hugs the lake, which is 9 miles long and connected by the Schroon River to nearby Paradox Lake. Mountains rise on all sides, where the skiing — both downhill and cross-country — is as awesome as you’d expect.

Unlike much of upstate New York, Schroon Lake has a major interstate running nearby, just far enough away to escape attention, but making for a winning combination of accessible and remote. It’s a four-hour drive from New York City, pretty much perfect striking distance for a weekend getaway. Here’s why the trip is worth it.

1. You can always get out on the lake.

For the uninitiated, the sight of SUVs, tents, and heated sheds dotting the middle of a frozen lake can be pleasantly jarring — those things just don’t seem to belong together. Except that they do. With its abundant trout and salmon, Schroon Lake is a top spot in the state for ice fishing, and as a result an entire temporary population takes to the ice for much of the winter.

Just watching the scene is fascinating, with holes being drilled through the ice, dogs playing on the lake with their owners, and friends hanging out and doing their best to keep warm while they wait for something to bite on the line.

2. The slopes are calling… 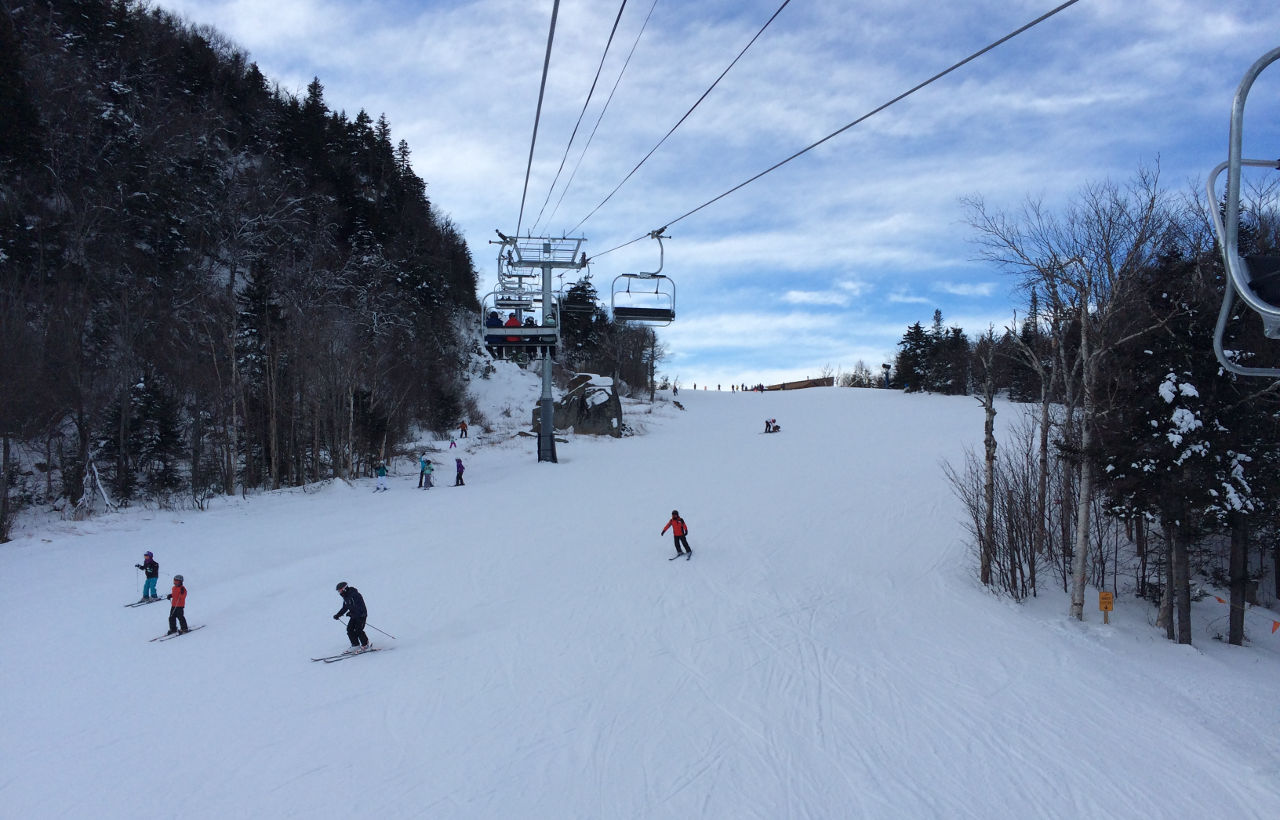 The New York Times has called neighboring Gore Mountain “a vastly underestimated gem of a mountain,” which doesn’t tell you everything you need to know about the slopes here, but it’s a good start. The 109 trails and 15 lifts across four mountain peaks and 2,537 vertical feet accommodate all levels of experience, and keep things interesting over a weekend of skiing. You can actually ski more acres here than at any other resort in the state. Not bad, especially when you consider all the places Gore Mountain’s competing with — New York has more ski areas than any other state in the country.

Gore Mountain’s trails also come with six dining spots to keep skiers well fueled, so you’re good for everything from coffee and breakfast burritos at Ski Bowl Lodge in the morning, to craft beers and dinner at The Tannery Pub and Restaurant as the stars come out. The resort’s a 16-mile drive from the southern end of Schroon Lake — each morning, you’ll be out of bed and on those brilliant slopes in no time.

3. …and the Snow Train can take you to them.

In 2011, a historic rail line reopened between Saratoga Springs and North Creek, with winter services dubbed the Snow Train. After pulling into the North Creek station, free shuttle buses take passengers to Gore Mountain. Connections to the Snow Train from New York City are also available via Saratoga Springs. What a way to get from the city to the slopes!

This winter, the railroad will add a weekend-long package that includes accommodation right on the train in historic Pullman cars, with some meals and drinks, equipment storage, and lift tickets included.

Aside from the weekend packages, the winter 2017 schedule has yet to be released, but stay tuned. In past years there’s been a steady schedule of departures and arrivals, with opportunities for on-train dining while taking in the scenic route, as well as day-long ski trips from Saratoga.

4. This is a real-life winter wonderland, with a trail system for easy exploration. 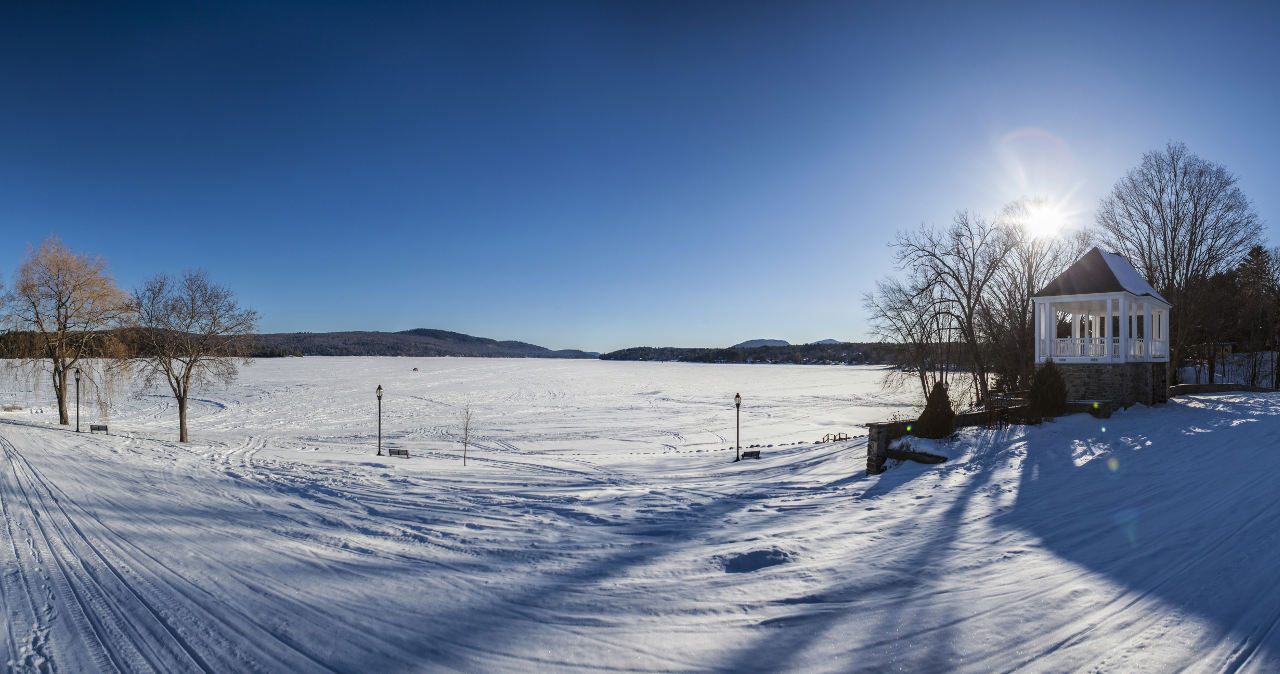 When it comes to exploring the vast system of trails around Schroon Lake, the options can seem endless: Hiking, snowshoeing, cross-country skiing, and snowmobiling are all great ways to take in the wintry world. Driving the backroads in this region, you’ll frequently come across a “snowmobile crossing” sign — more than 200 miles of snowmobile trails crisscross the area around Schroon Lake. In fact, several trails run right through town, and the nearby Vanderwhacker Mountain Wild Forest offers more than 25 miles of snowmobile trails that connect to the larger network of Adirondack trails.

Snowmobile outings can be as short as an hour, or as long as a few days if you plan well for it. C+C Adirondack Snowmobile Tours offers a “Dinner Tour,” taking riders on a trail adventure to a great local restaurant.

Cross-country skiing, unlike snowmobiling, is hard work. But it’s fun work — and it keeps the body warm in freezing temperatures. The area around nearby Cheney Pond has a few popular trails of varying lengths that incorporate different bodies of (frozen) water in the area. Snowmobile trails are also usually open to skiers.

Near the southern end of Schroon Lake, the 14.5 miles of winter trails at the Natural Stone Bridge and Caves are great for snowshoeing. Seeing the fantastical formations of frozen waterfalls, marble caverns, and deer tracks in the snow is magical at any time of day, but especially so on a Saturday evening moonlight tour — hot drinks, marshmallows, and campfire included.

5. There’s a cozy reward for braving the cold.

What’s the point in spending a day out in the snow if you’re not going to plant yourself in front of a roaring fire at the end of it? The Sticks and Stones Wood Fired Bistro & Bar has one of the better fireplaces in the area, with a soaring stone mantel — and some fantastic pizza to eat by it — in a rustic, wood-paneled dining room. There’s easy snowmobile trail access, making this a perfect stop during an outing.

If you’re skiing Gore Mountain, midway down the slopes you’ll find Saddle Lodge and the roaring fire it’s got going all day, along with some pretty sweet views of the surrounding mountains. Back in town, Witherbee’s Carriage House is a longstanding restaurant in Schroon Lake with an old stone fireplace that practically demands you sit down in front of it with a beer and maybe a bowl of their signature chili.

If you’re looking for a hoppier way to celebrate the day, Paradox Brewery and its lovely tasting room offer up local beers year-round. The brewery’s “Off Trail” series of limited-edition, more experimental brews can be particular fun. See you at the bar!

This post is proudly produced in partnership with Schroon Lake, NY.
Tagged
Trip Planning New York, United States
What did you think of this story?
Meh
Good
Awesome