The surfing can be incredible, with Tofino being the best-known spot. The south coast of the island, including Juan de Fuca Provincial Park, is also wave-rich but can be challenging due to fickle waves and localism at some beaches. For our visit we brought our surfboards but there are more than enough other options to have a great time come waves or flat water. 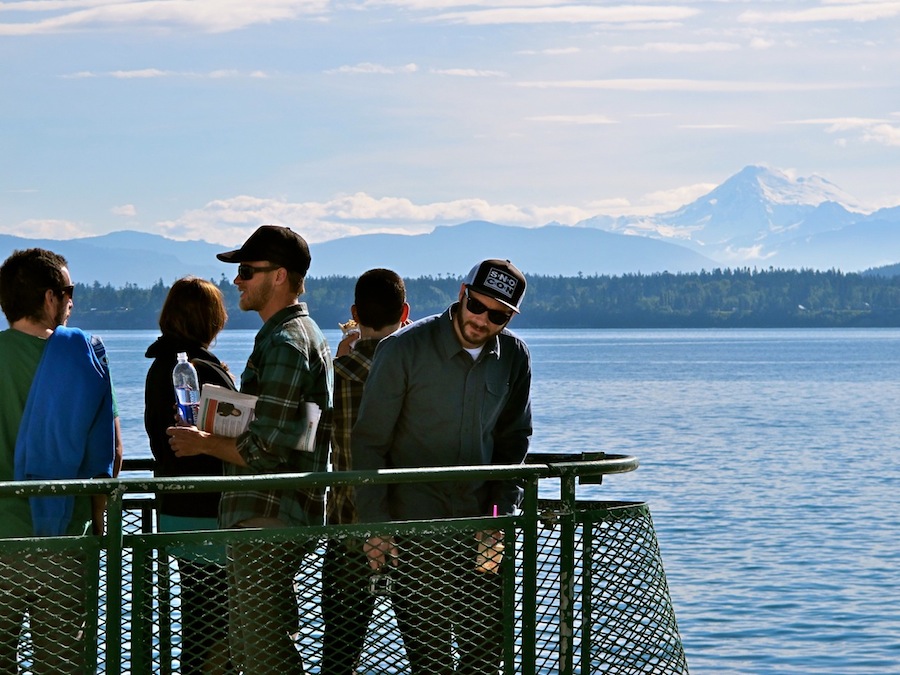 The ferry crosses to Sidney in about three hours and the weather is often surprisingly mild. Though much of Washington and Vancouver Island seem perpetually drizzly, the Strait of Juan de Fuca is part of a drier microclimate thanks to a rain shadow created by Washington's Olympic Mountains. On clear days the ferry decks are warm and the views are amazing. 10,781-foot Mount Baker towers above the San Juan Islands and the coastal lowlands of Washington and Canada. 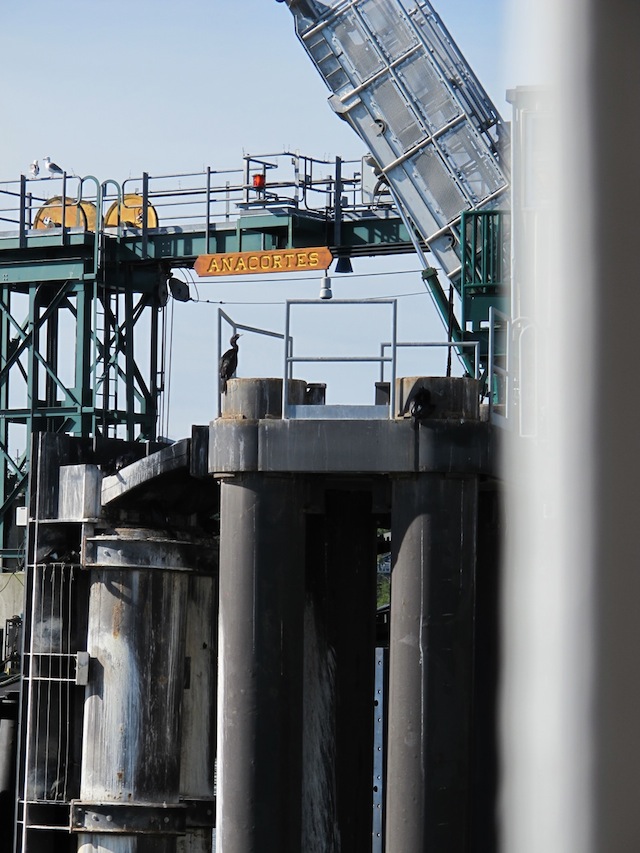 Our group of friends left home in Seattle and visited Vancouver Island during an extended weekend, camping on Sombrio Beach and exploring other parts of the Juan de Fuca Provincial Park. Though getting to the island is somewhat time-consuming, hours of your trip are spent aboard either Washington State Ferries or BC Ferries, which can feel like a vacation in itself. We took the ferry from Anacortes, WA to Sidney, BC. 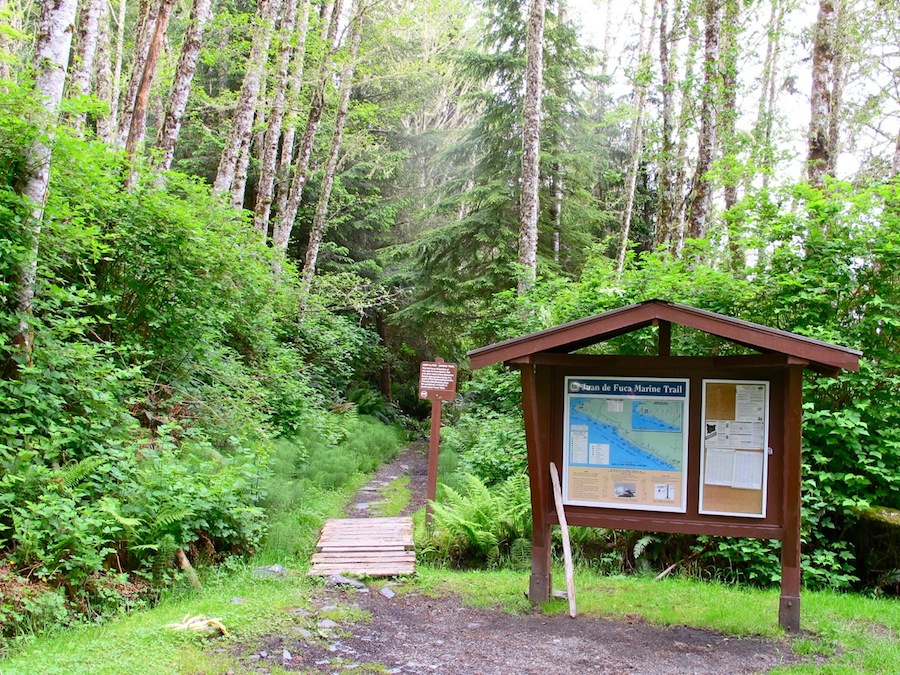 We headed from Sidney out to Sombrio Beach, about a two-hour drive. Sombrio is just one of many beaches that makes up the coastal park. One of the main features here is the Juan de Fuca Marine Trail, which connects China Beach with Botanical Beach near Port Renfrew. The trail follows about 30 rugged miles of coastline, passing seven substantial beaches depending on tide levels. Sombrio is roughly half way if hiking the full length, but for the more surf-camp-party kind of people (like us), it can be reached from the road with a 10 minute walk. 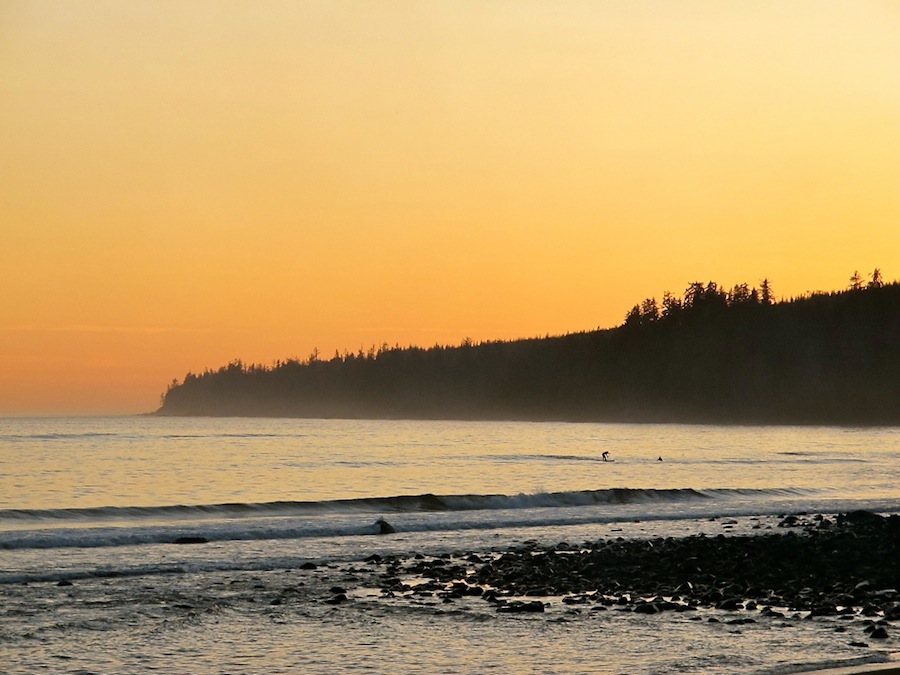 Our group had a variety of surf weapons. Of course in the Northwest, requirement number one is a hooded wetsuit with gloves and booties. For boards we had a bit of everything -- an inflatable stand up paddle board, a regular stand up, a few fun-boards, and a couple short boards. Being on the Strait without direct exposure to the open ocean, this coastline needs specific swell direction for waves to arrive. About half of our days had surfable waves, and they came in all shapes and sizes letting us utilize all the boards. 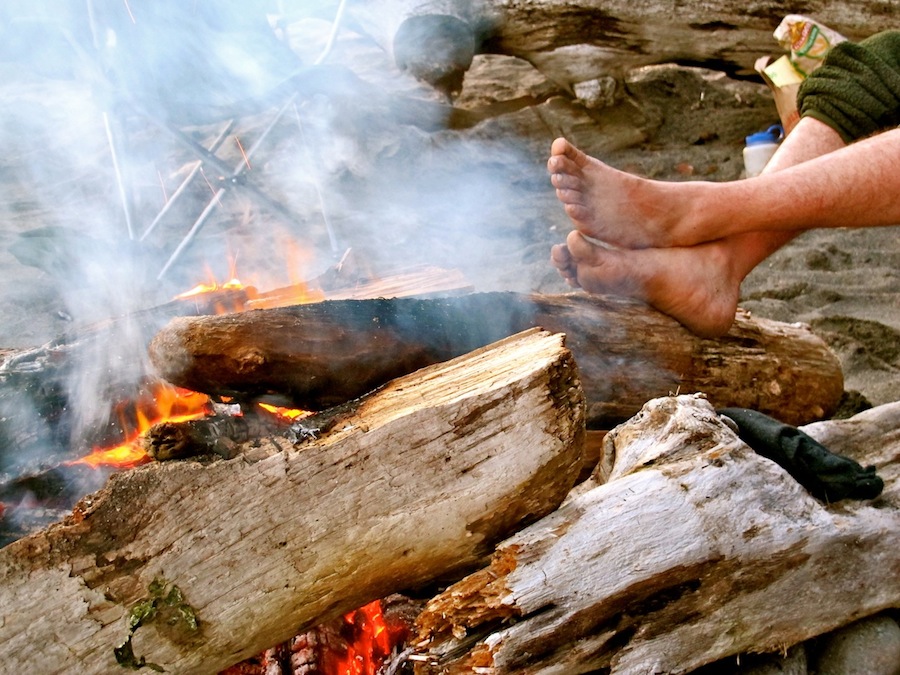 Upon arrival at the trailhead I was worried we'd be discouraged from playing music around the campfire at night as there is some mention on the registration signs of "no amplified sounds of any kind." But once at the beach a handful of drunk fisherman were laying into a massive log with a chainsaw and my worries wafted away in a haze of two-stroke smoke. Sombrio is heavily trafficked - these guys had their chainsaw because most reasonably-sized firewood gets scavenged and burned by the numerous campers that frequent the beach. If you want a wilderness experience try one of the plentiful other, harder-to-reach beaches. 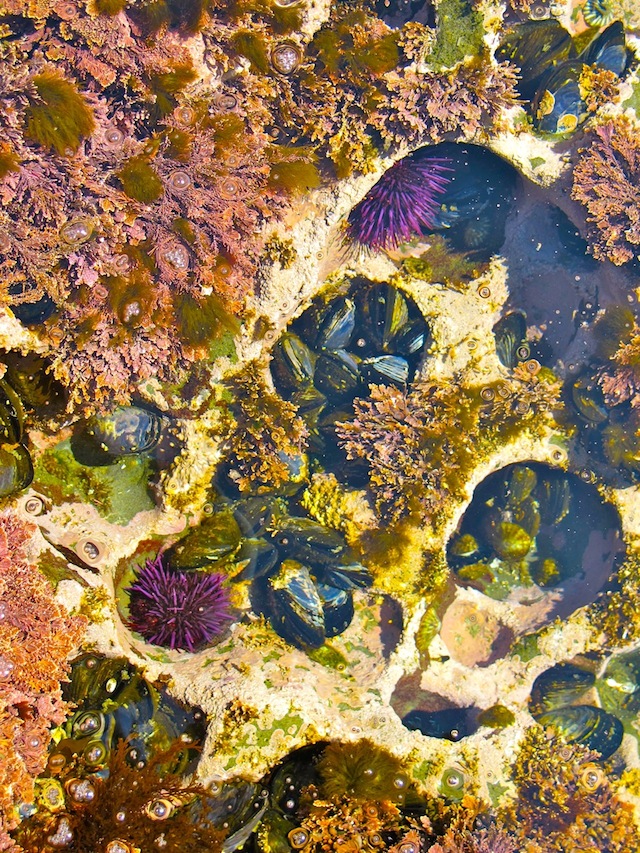 The tide pools are filled with vibrantly colored specimens of fish, anemones, urchins, star fish, and other crustaceans. These creatures all live in an underwater garden built from endless varieties of aquatic plants. Visiting the beach at low tide gives you the best opportunity to see the full extent of the ecosystems. 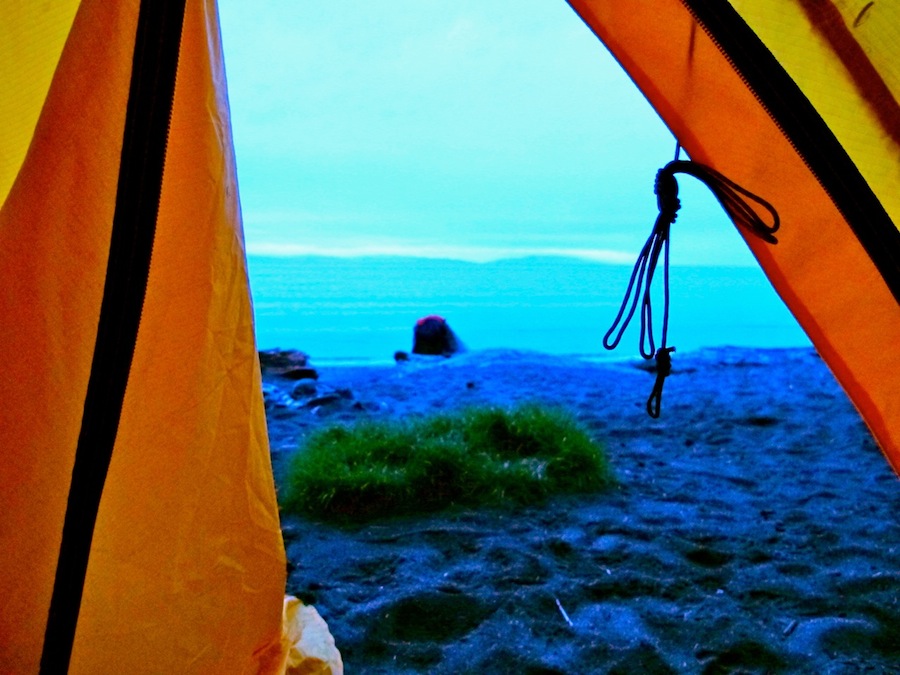 I am pretty good at walking on a slackline, but it proved exceptionally difficult one night as I attempted to walk the one we'd set up over sand near our camp. It was midnight, and around the slackline 15 people were dancing wildly to rule-breakingly amplified Gogol Bordello, half of them spinning LED-lit hula hoops, the others twirling their headlamps crazily about. One friend was calling himself Vladimir and stumbling about forcing friends and strangers alike to drink from a large bottle of vodka, and animal sounds came down from the trees high above us thanks to a friend with a penchant for late night arborism. No matter how crazy the night gets, the early morning surf check from the tent is a piece of cake. Luckily it was flat. 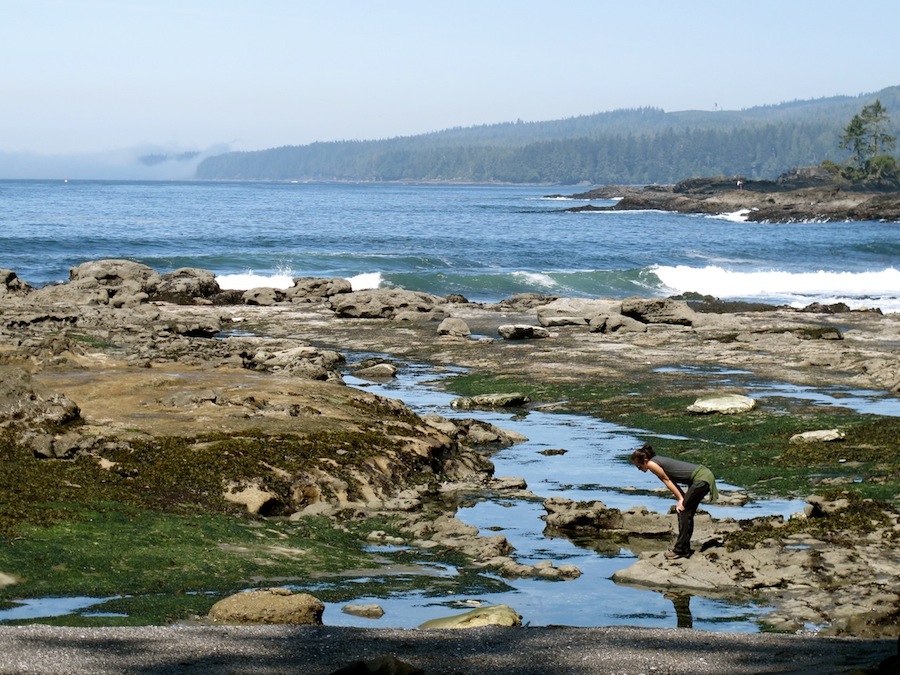 The Botanical Beach at the west end of the park is a labyrinth of rocky tide pools and sandy coves teeming with wildlife. Anyone hiking or camping in the park needs to take wildlife precautions as there are healthy populations of both black bear and cougar throughout the island. 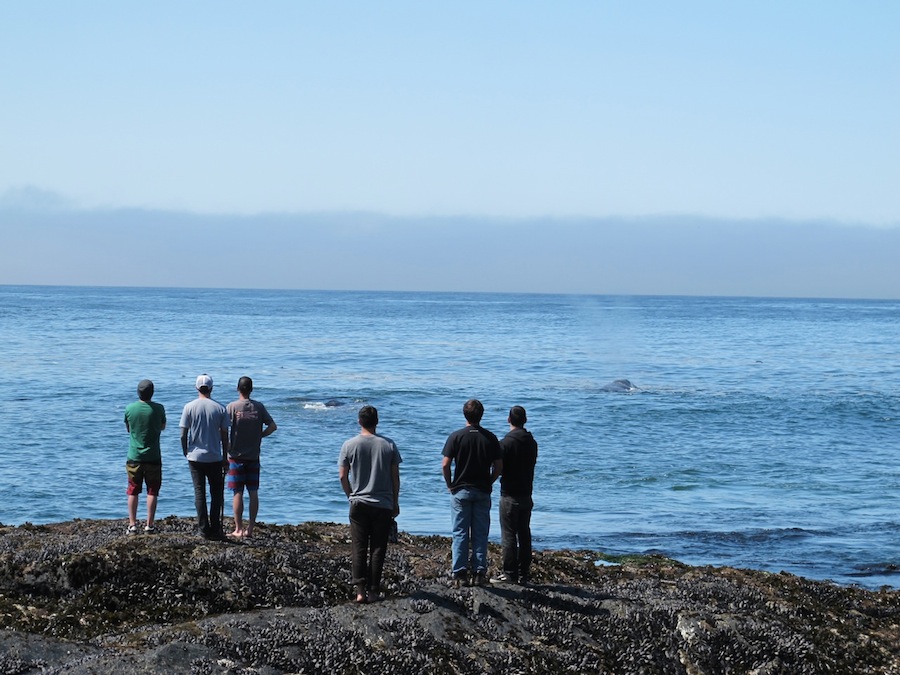 This section of coastline is frequented by all types of whales. Orcas are often sighted and Grey Whales are frequently seen as they pass by feeding off these rich shores while migrating between Mexico and Alaska, especially in March and April. We were often distracted during surf sessions by whales passing by just outside of the break. At the Botanical Beach in particular, due to the sudden drop off into deep water we were able to stand on dry land and watch whales from as little as 20' away.

Tagged
Surfing British Columbia, Canada
What did you think of this story?
Meh
Good
Awesome
✖
travelstoke
Download the mobile app
stoked by