MY OLD APARTMENT in the capital of Quito is a rather famous hub for travelers in Ecuador. My roommates and I were active Couchsurfing hosts, and incessant streams of surfers from all walks of life crashed on mattresses around the house.

On a recent return visit to La Casa Equinoccio — named after the street we lived on, Equinox — a bunch of us decided to take my friend Omar up on his open invitation to visit Finca Argentina, his childhood home in the jungle. Even though it costs a dollar an hour to travel by bus in Ecuador (Quito-Puyo: 4 hours, $4), the ultra-budget-travel bros I ended up going with were dead set on hitchhiking, so that’s what we did.

Puyo is the biggest city in the Ecuadorian Amazon — or, as deep as you can get into it on four wheels, making it a crossroads for rivers, roads, and indigenous communities of El Oriente — “The East.” The chronological history of oil exploitation in Ecuador can be traced from north to south, with Puyo sitting symbolically in the middle, like the unexposed inch of film between ‘before’ and ‘after’ shots. The northern Oriente is full of devastated oil towns crawling with crude businessmen and a generation coming of age with cancer. Here, at the headwaters of the Amazon, an average of over one oil spill a week occurs. In the south, remote territories continue their now-legendary resistance against that kind of future, under the cover of the rainforest. 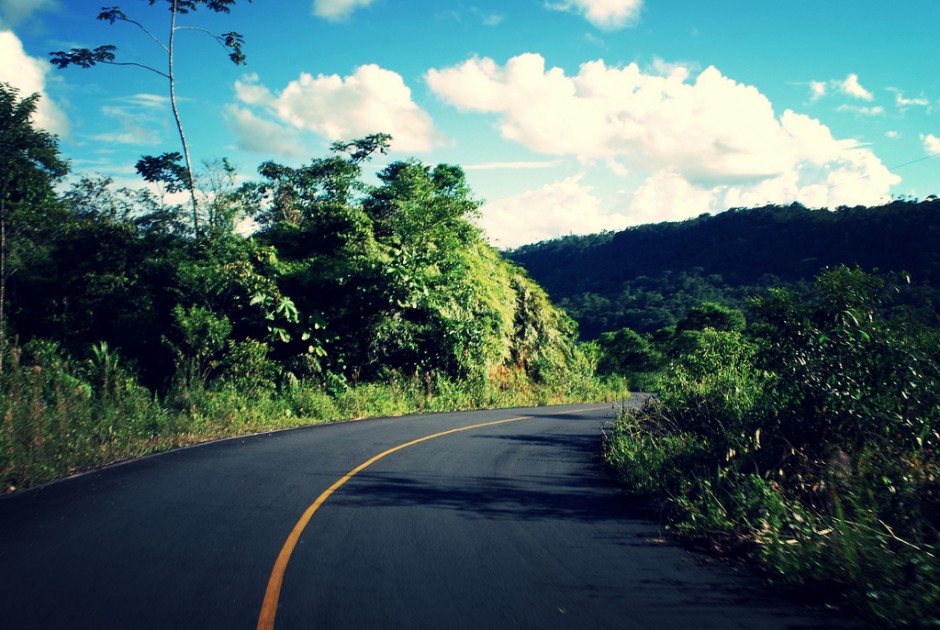 I took Omar's room when he moved out of La Casa Equinoccio last year, unpacking my zine collection out of crates as he picked classic novels off a wood-and-concrete bookshelf and stacked them lovingly into a leather suitcase, their brown spines strong as the day they were bound. He was struggling through film school at the Visual Arts Institute of Quito and moving into the cheaper place next door with his girlfriend and her brother to save on cash. A conversation on books and films naturally sparked up over our mutual heaps of crap, and never really ended. We’ve been good friends ever since. 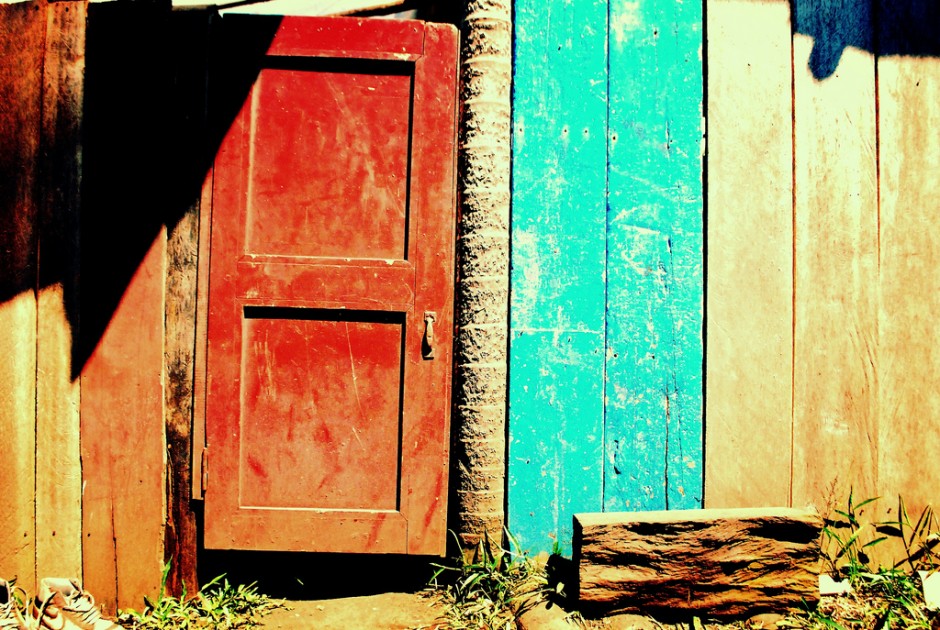 He was born and raised on 50 acres of jungle just outside Puyo, in a single-parent household with two brothers and his mom, Guadalupe. When I wasn't trekking or swimming, I spent most of my time chatting with Lupe at the market or around her kitchen table, half inside and half out. Her father worked there when the land was owned by Germans and inherited it when they moved on to Argentina, naming the farm in honor of their new country. This is one of the cabins the brothers built to accommodate travelers who visit via Couchsurfing and word of mouth. 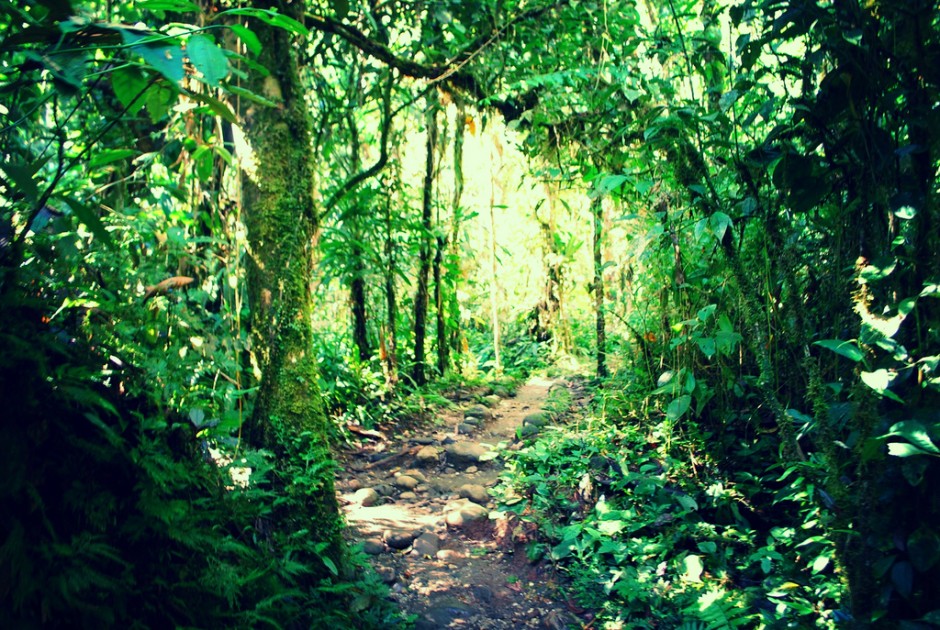 Gateway to the wild

Puyo's exclusive position in the Amazon keeps the wild around it more accessible than it is in most South American countries. You can be dropped in the middle of the city center and wander deep into the jungle within hours. Dive into its rivers' waters and end up in Peru or Brazil within a few days. Meet folks who live in river villages on the way who don't speak Spanish, but Shuar, Hoarani, or Kichwa. 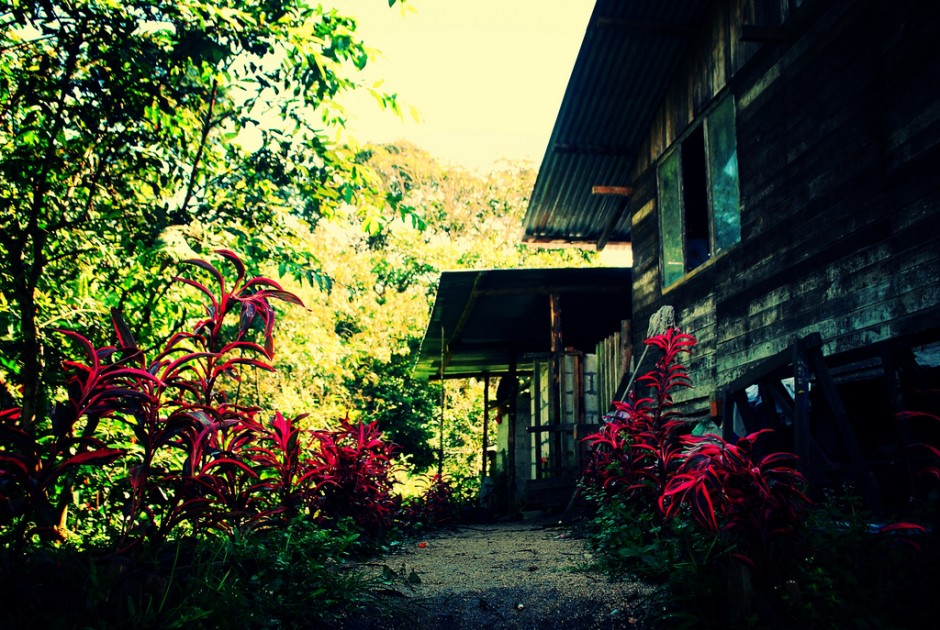 Half the Couchsurfers who Omar invites to Finca Argentina turn him down in one sweeping statement or another, saying "I've already been to the jungle - in Nicaragua," or, "I plan to do that later on in Peru," as if 'the rainforest' were one congruous, consumable destination, like a Big Mac that looks, smells, and tastes the same wherever you buy it in the world. Omar usually responds with, "Oh." 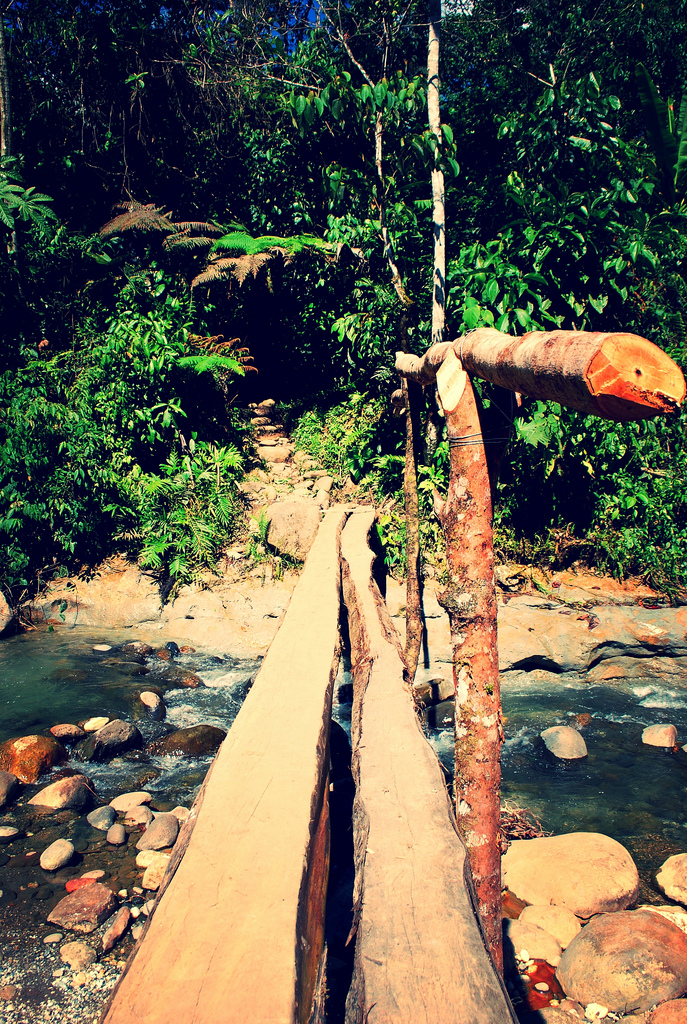 A mix of truck beds, tin-can vans, buses, and our own feet took us to a waterfall about 3 hours north of Finca Argentina. A fallen tree trunk sliced cleanly in half and spread open over a tiny tributary separated our party and 555 acres of secondary rainforest at the Hola Vida Ecological Reserve, where the falls waited. 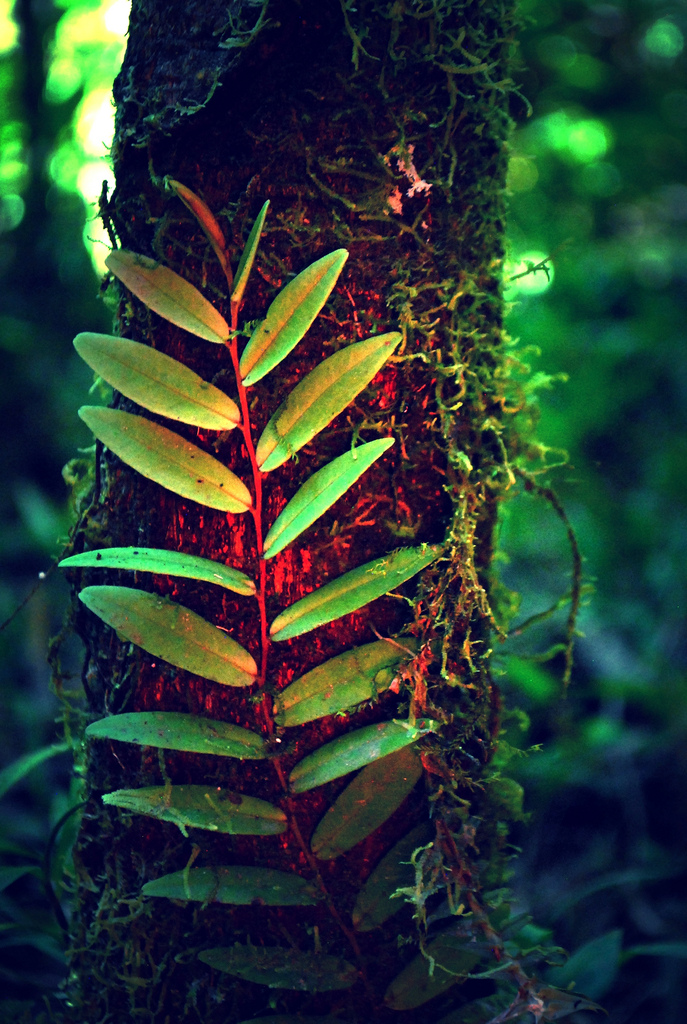 Crossing the bridge was like walking into a big botanical tent - damp, dark, and quiet on the other side. It was as if everything beneath the jungle canopy had been fast asleep for ages - or just pretending - wrapped in mossy fleece glittered with raindrops and orbited by living particles riding on an absentminded breath, extinguished from the depths of sound dreams. 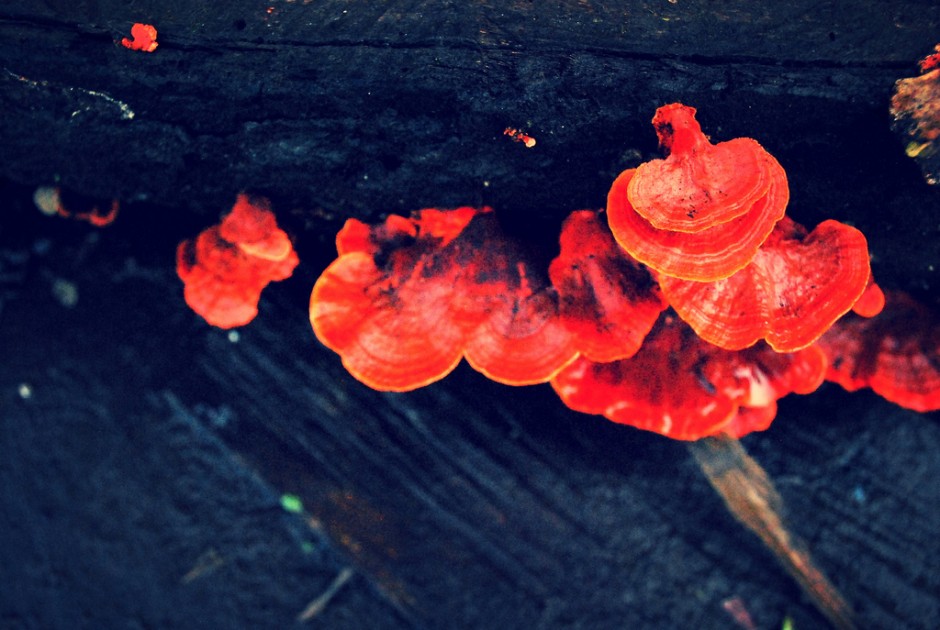 A regimen of sun, rain, and birdsong keep colors saturated in Reserva Ecologica Hola Vida. Even dead things, like this fallen trunk, show signs of life. 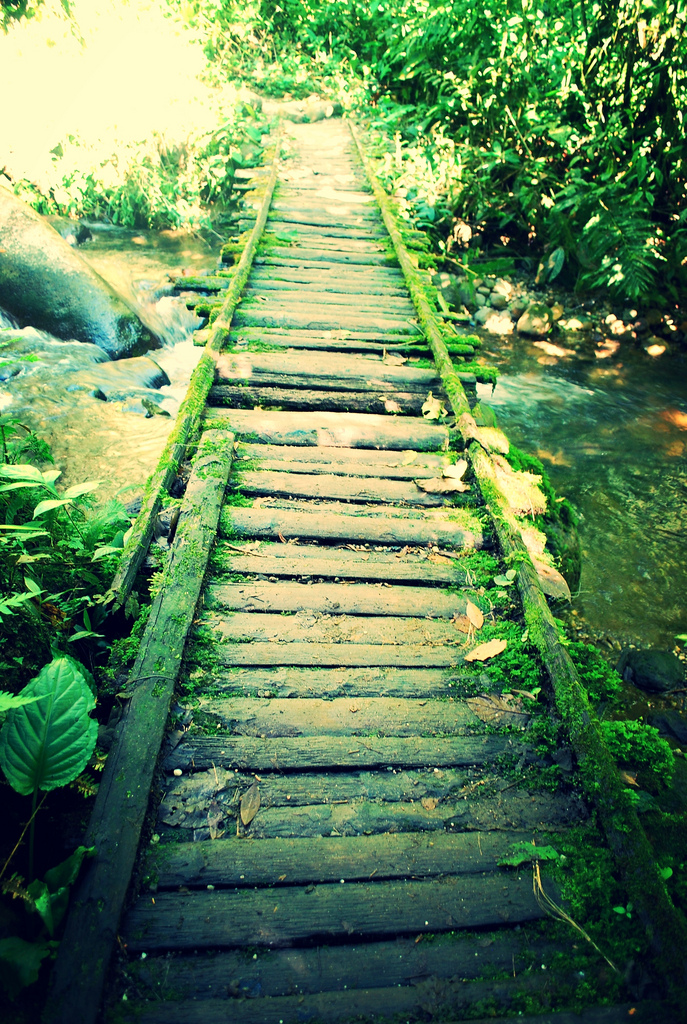 There must be millions of palm-tree bridges or whatever other ambiguous variations of passage over water in the tropical forests of the world, and I've carefully inched my way along many of them, single-stepping like a bride. But each one is unique - next time, I could slip through cracks, or end up in a completely unexpected world on the other side. Bridges are the places between places, a title for that transitional space in songs between the beginning and the end. That sensation of suspense, both literal and figurative, is something I like to hold on to, so I photographed each one on our hike. If I jammed all the tenuous, trembling jungle bridges on Earth, or even just in 'the rainforest,' into one big box in my head, I would have given up on traveling long ago. Left far behind the group, I got lost in a forest of walking palm trees. 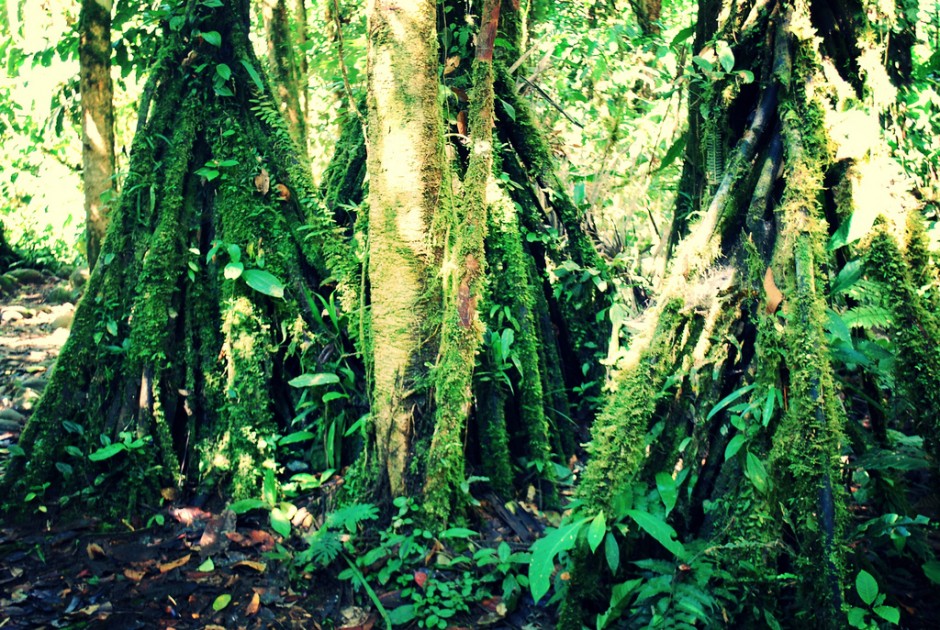 Instead of just one trunk, Socratea exorrhiza, or the "walking palm" tree, has a network of long legs that crawl (over the course of years) toward sunlight and nutrient-rich soil along rainforest beds in Central America and expanses of the Amazon. Their roots sink deep into the earth, getting grounded for a generation or so before dying off at the bottom while younger ones renew the process up top. When a palm walks into a fallen trunk, it just continues growing horizontally until it's moved a sufficient distance away from its original site of germination, where it then resumes vertical growth. 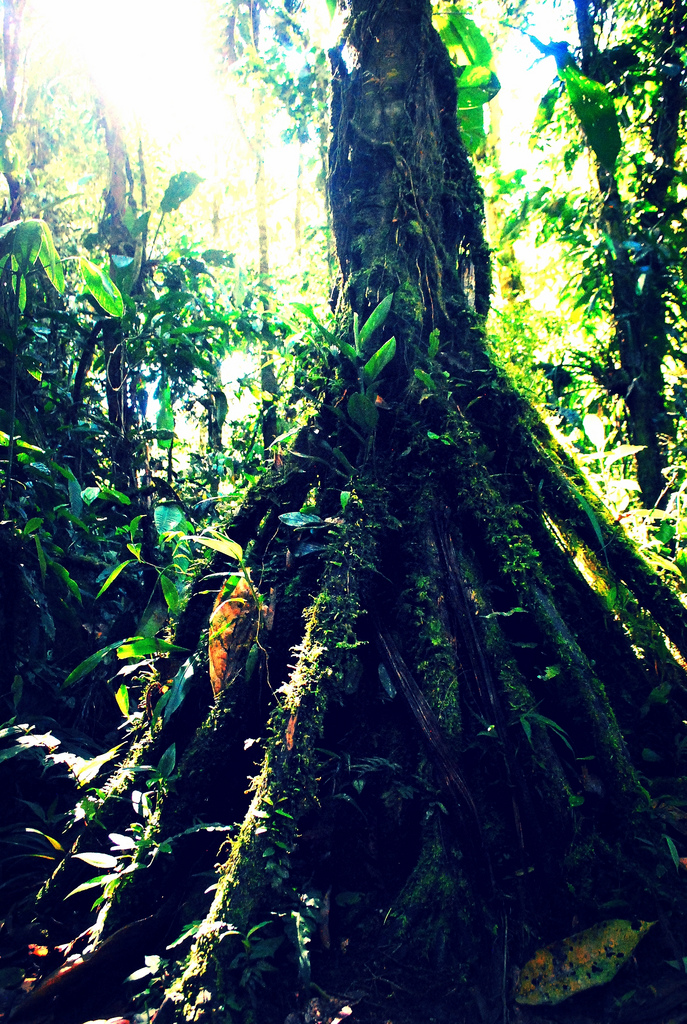 But as much as I'd like to identify with the vagabond lifestyle of these sol-searching trees, a hard wall of science came down between our romantic metaphor and reality. My later research pointed to arguments relegating the walking palm to myth, while another sizable chunk of evidence still suggests they do walk indeed - just very slowly. I'm not about to sit still in front of one of these with a wooden ruler and a notepad for 60 years, so the walking palms are allowed to drift toward that murky horizon in my mind separating Things I Know For Sure and Not So Much (except that the latter takes up almost all the space). 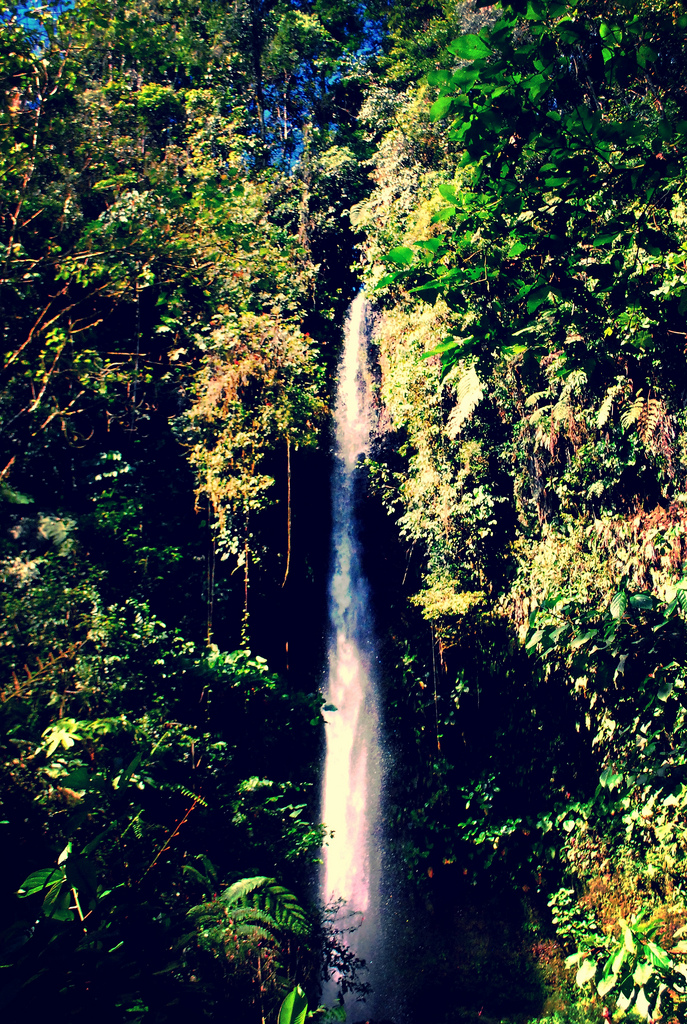 Starting from 70 feet up, the Hola Vida Waterfall plunges into a warm pool carved from a bed of stones - rose quartz, emerald, and even gold. Like all waterfalls in Ecuador, and in native communities around the world, I expect, Hola Vida possesses a ritual significance. Here, going for a swim is a cultural and spiritual ceremony, one of cleansing. 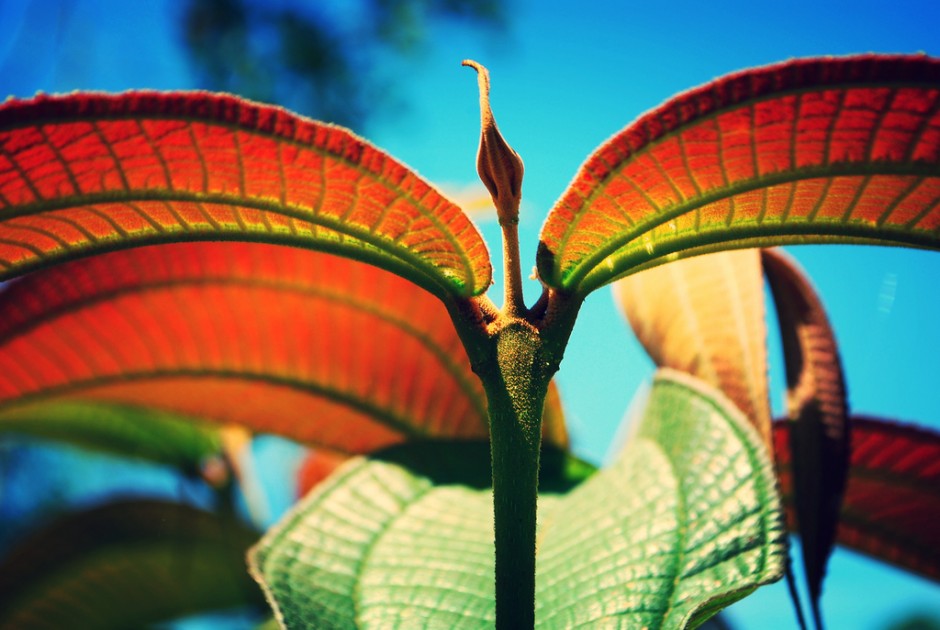 The name Puyo comes from the Kichwa word for "cloudy" - puyu. It rains about five times a day here, and I mean serious, doomsday-style storms that scrub the flora good and clean before the sun glazes a waxy sheen all over them again. The clouds part and technicolor hues pop up everywhere you look, like this young colca tree that reflects every color of the rainbow in just a few square inches.

Tagged
Hiking National Parks Insider Guides
What did you think of this story?
Meh
Good
Awesome