I went to Torres del Paine National Park in Chilean Patagonia in October 2014. Like many adventurers, I came to hike the famous ‘W’ trek but also to photograph wildlife, particularly its top predator, the elusive and rarely seen puma.

I joined the puma-tracking excursion in Torres Del Paine, led by EcoCamp’s very own wildlife expert Diego Araya and puma tracker Roberto Donoso. At the conclusion of the trek, I felt a great sense of admiration for the pumas and appreciation for the people who protect them. I was able to witness these magnificent animals in their natural state and capture beautiful images for my travel-photography portfolio. I would highly recommend this experience to those who love and wish to protect wildlife but, like my guides Diego and Roberto, prefer that groups remain small to protect the animals and maintain the intimacy of the animal-human experience. 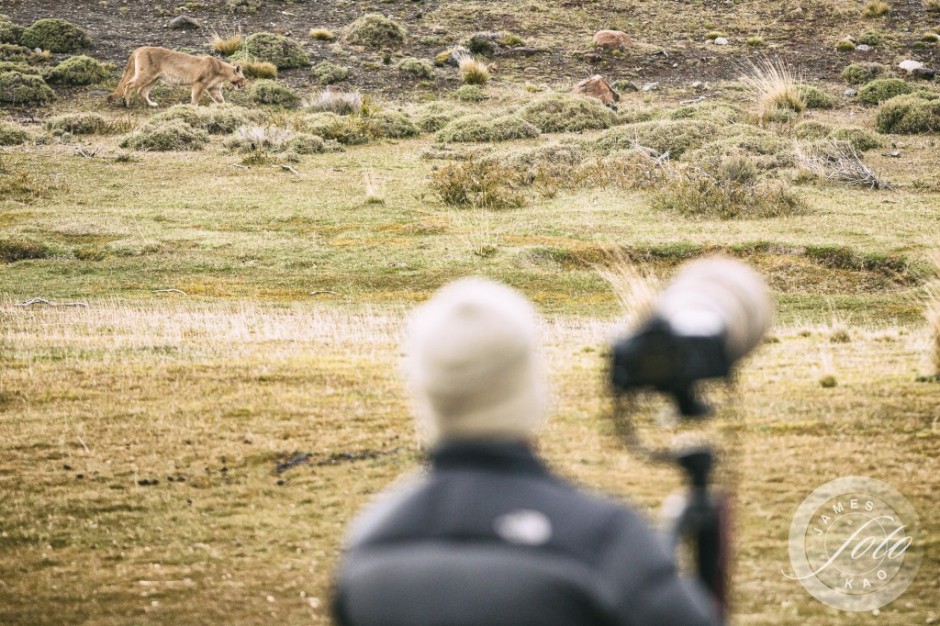 Living in LA, I seldom have opportunities to photograph wildlife in a truly natural state. Our local mountains are home to wild mountain lions that have earned a reputation as menaces for occasionally attacking and killing people and pets. Admittedly, I was always slightly fearful of running into one on my solo-mountain hikes and becoming its prey. I decided to conquer this fear and learn more about the animal, so I signed up for an exclusive puma tracking trek led by Diego Araya and his assistant tracker Roberto Dosono. Here Diego stands back to allow a puma space as it returns to its lair after a morning feeding. 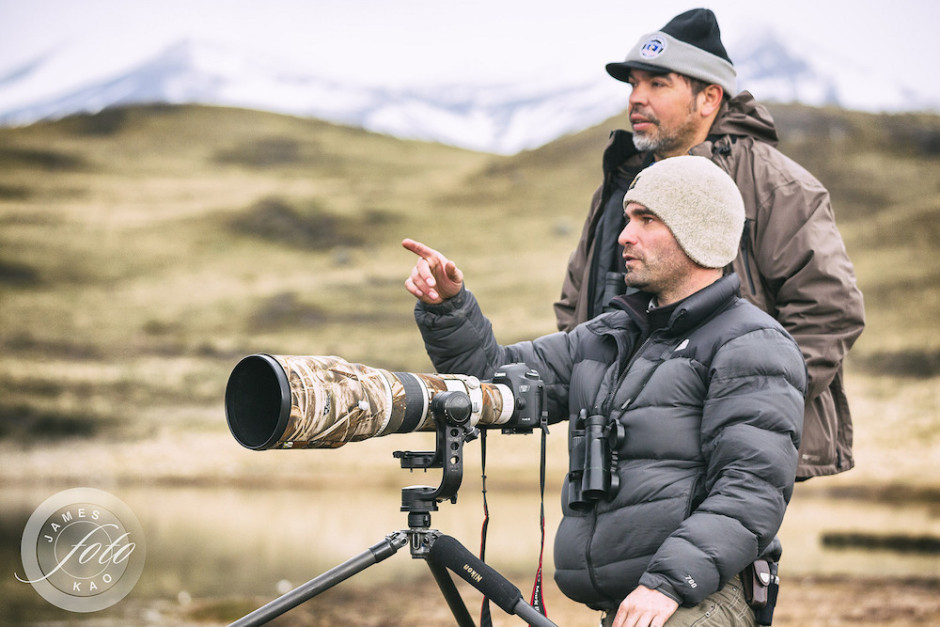 Over the course of six days, Diego and Roberto guided me throughout the vast areas of the park. Roberto would start tracking at sunrise to catch the nocturnal predators as they returned from their hunts to their day lairs high in the rocks and again late in the afternoon when the animals returned to feed or hunt. When a puma was spotted, he would radio Diego who would then guide me to its location. Here Diego (by camera and pointing) and Roberto discuss the movements of a recently spotted puma. 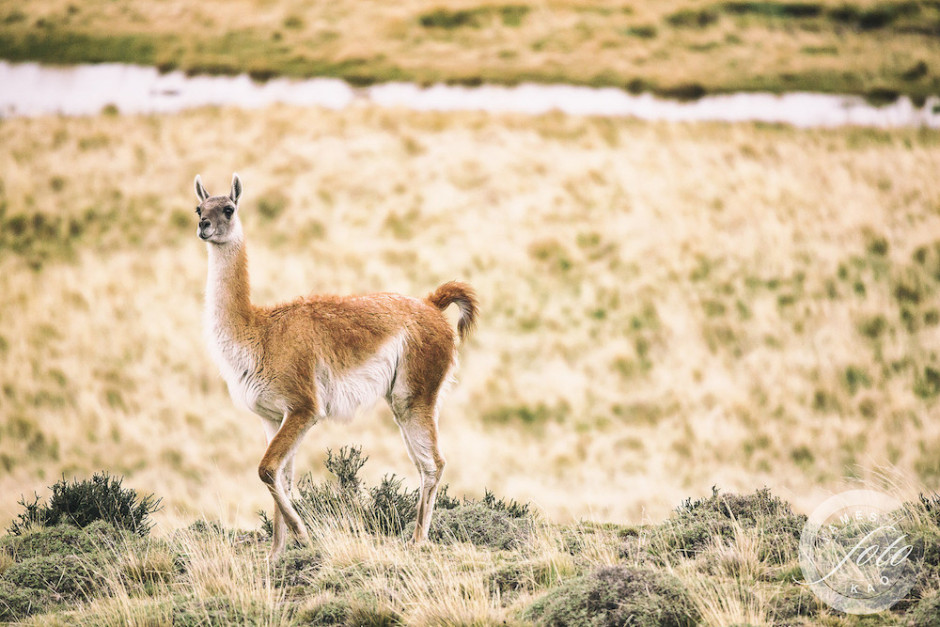 The camel-like guanaco is a herbivore native to Patagonia and the main prey of pumas. They have keen eyesight during the day and can spot pumas from a far distance despite their camouflage. Most guanacos live in herds for protection and those on the outside act as sentries. When one spots a puma, it emits a series of loud whining whistles and faces in the puma’s direction. Diego and Roberto listen for these whistles and watch movements of guanacos to locate pumas. Here you can see a nervous guanaco in its alarm pose. 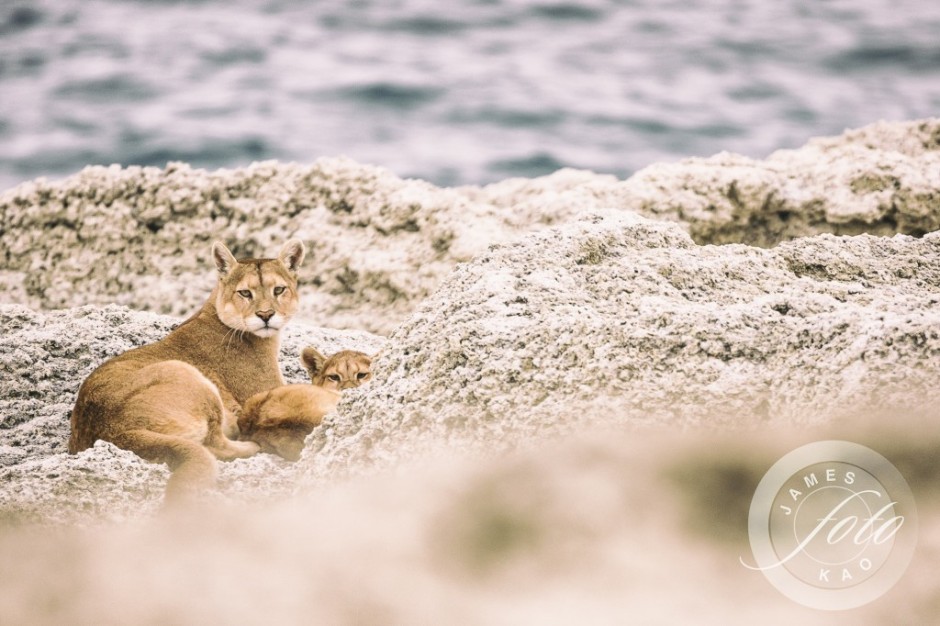 I crouched down low to the ground, camera in hand and now sweating from hiking a half hour with five layers of wool and synthetic fiber to buffer against the fierce winds of the Patagonian steppe. My guide Diego had come to a halt two meters ahead and motioned for me to stop. Gesturing with one hand, he pointed towards a small outcrop in the rocks below and after some hard squinting I saw them: two sets of cold feline eyes the color of sulphur glaring back at me. The pumas made no sound, no fierce growl, they were resting peacefully until we came upon them and now they knew we were there. “You should never surprise a puma mother with her cub,” said Diego, a professional wildlife photographer and guide from Puerto Natales, Chile. “Better that she knows where you are and sees that you are not a threat.” 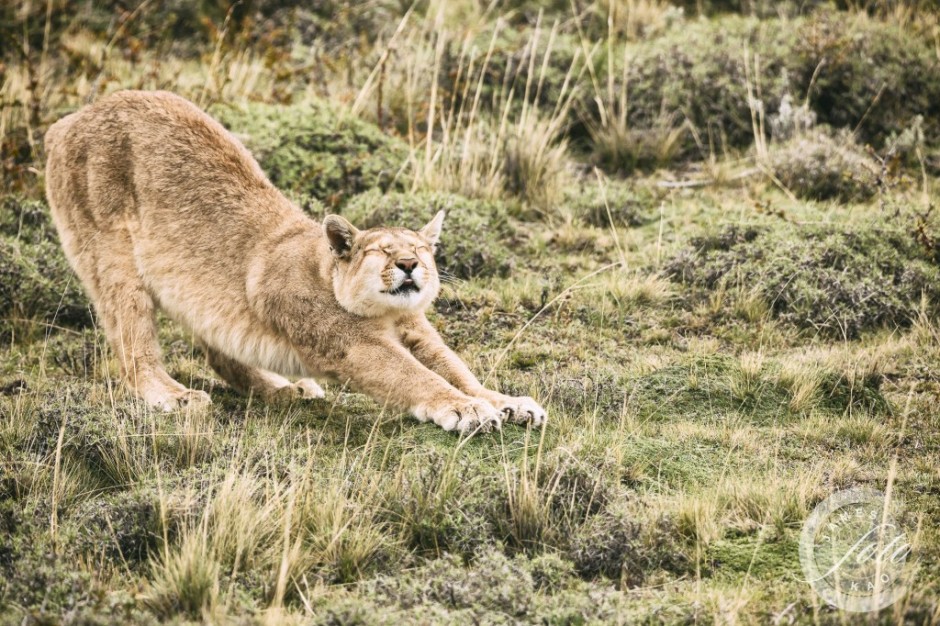 With plenty of guanaco and hares to feed on and with hunting prohibited, the 70-odd pumas in the park are quite content, almost like overgrown house cats. Diego and Roberto even had names for individual animals, such as ‘Mochita’ for this tail-less young female that they became acquainted with as a cub. Here ‘Mochita’ walked within two meters of me and then stretched as if practicing yoga. 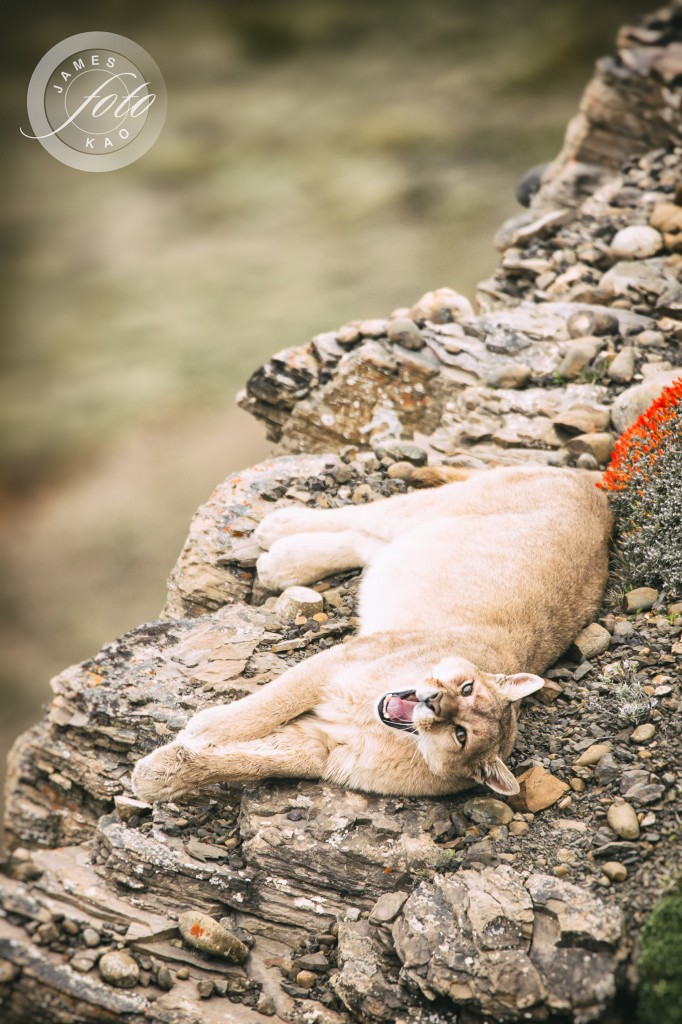 Diego signaled for me to continue forward to get a better shooting angle. "Move slowly and show no fear, you are not its natural prey," he added. Surprisingly I did not feel any fear, rather astonishment and admiration. Here I was only 20 meters from a large predator that could rip me to shreds for dinner. It was lying on an outcropping overlooking a long river valley, with the majestic massif of the Torres del Paine in the background.

Tagged
Student Work Chile
What did you think of this story?
Meh
Good
Awesome