I WAS NOT SURPRISED by the Toronto-Pearson immigration officer’s reaction when I told him that my final destination was Cairo. “What! Why? Is it even safe?” I had come to expect this; he was not the first to express concern about my upcoming trip to Egypt. My boss had dismissed my travel plans with one line: “It’s too dangerous,” while a relative saw me off with this piece of advice: “Don’t get kidnapped.”

Upon arrival at Cairo International, I was met with a completely different sentiment — a feeling of pride and possibility that washed away any sense of trepidation I was feeling. A billboard displaying a quote from President Obama hung in the hall past the immigration booth, where a smiling Egyptian officer told me, “You are in Egypt!” with a note of triumph. The billboard text read: “We must educate our children to become like young Egyptian people…”

On the streets of Cairo and Luxor I saw Egyptian flags flying everywhere, while street sellers hawked t-shirts with “January 25th” emblazoned across them. 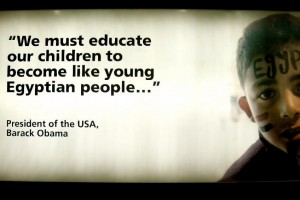 These expressions of pride and victory sat awkwardly next to anti-SCAF graffiti, sometimes scrawled along walls, but usually neatly stenciled. I was not quite sure how to gauge the prevailing sentiment on the streets; was it of indefatigable triumph or stymied despair?

But I was always welcomed warmly and with a brave face. Everywhere I went, people greeted me with a hearty “welcome to Egypt!” or “you are welcome!” while insisting on helping me get to wherever I was trying to go. One guide was even more explicit and expressed his thanks for “supporting Egypt in this difficult time.” He could have been referring to “difficulties” at the national level, as the transition to democracy continues, or at a personal level — one in eight Egyptians depends on tourism to earn a living. The industry is said to have declined by at least 30% in the past year.

The Egyptian tourism industry’s misfortune is, however, the visitor’s opportunity: I never had to battle my way through crowds of tourists, not even at the most famous sites. I have a photograph that I took of the Pyramids where the place looks empty.

In 2009, I was living in San Francisco when the “Tutankhamun and the Golden Age of the Pharaohs” exhibit rolled into town. I walked down to the De Young with the intention of buying a ticket and having a look. Faced with a huge, noisy crowd waiting to enter the exhibit at its allotted time, and a $30 ticket price, I changed my mind and spent two hours in the park instead.

In Cairo, on the other hand, I walked to the Egyptian Museum of Antiquities, paid less than $10, and wandered through the empty, dusty museum, soon finding myself alone in front of King Tut’s solid gold death mask (which cannot leave Egypt anymore, so wasn’t even part of the San Francisco exhibit).

Our small tour group also got to enjoy Kom Ombo Temple — usually packed with cruise ship passengers — alone, and our visit to Karnak Temple was peaceful and unrushed. Usually it is so crowded that visitors are assigned a time slot for entry.

I was made keenly aware of the history of targeted attacks on visitors, but also of the efforts Egyptians go to to ensure the safety of tourists.

At times, the reason these tourist sites were so empty played on my mind — much as it must have been on the minds of those people who expressed concerns over my safety prior to my trip. Walking over the bridge in Dahab that was hit by bombings in 2006, ballooning over Luxor Temple where 62 people were murdered in 1997, I was made keenly aware of the history of targeted attacks on visitors, but also of the efforts Egyptians go to to ensure the safety of tourists.

Sometimes this effort manifested itself in ways that were inconvenient, such as the tourist convoy to the temples of Abu Simbel that was unavoidable and left at around 4am; or frustrating, like the several times we were stuck at a checkpoint for over an hour waiting for a police escort to mobilize itself. I cannot vouch for the effectiveness of these security measures but will say they brought, at least for me, a sense of security.

“The people of Egypt are the greatest people on earth; and they deserve the Nobel Prize for Peace,” I read on a billboard at the Cairo airport on my way home. It was a quote from Austrian president Heinz Fischer, overlaid on a background of an Egyptian crowd waving their flag. For all the doubts and notes of exhaustion I’d sensed over my three-week trip through Egypt, the billboard returned my thoughts to a prevailing mood of promise.