I nursed my eight-beer taster at the Silver Gulch Airport Bar in Anchorage, Alaska. It was an off-menu item, but after a harrowing descent on Delta Flight 1089 that crashed trays in the galley and caused a Minnesotan woman to upchuck her chicken wrap in the aisle, the bartender offered it as fortification for my connecting flight to Fairbanks.

As hoppy warmth spread in my stomach, I began to wonder if the nervous flyer in me had exaggerated the turbulence. Then a newly landed group passed by in a collective tremor, one trio earnestly checking their pulses. No doubt about it, the Alaskan skies were testy tonight. The Anchorage-to-Fairbanks was just as bumpy, but with newfound drinking buddies and a soupy buzz, the silent weeping of hours past was now manic laughter. Still, I couldn’t ignore the looming reality: Tomorrow morning, I would ride a prop plane across the Arctic Circle. Sober.

Northern Alaska Tour Company runs small group flights to Arctic destinations, flying so low you can see the grizzly bear hovering over its freshly killed caribou. For many it’s the thrill of a lifetime, but for the nervous flyer it can sound like a death sentence. Luckily, within five minutes of meeting pilot Todd Mackinaw, rosy-cheeked and easygoing but fastidious when it comes to safety, all fears were allayed.

Were there times when our eight-passenger Navajo was batted around like a fly in a fan? Sure! Are you more likely to crash in a small plane than a large one? Absolutely! But here’s why my Arctic Circle Air Adventure from Fairbanks to Coldfoot didn’t rattle me one bit:

Our pilot was experienced. Todd is an Air Force vet who got his pilot license in 1985. There’s a common misconception that tour company pilots are beginners, logging their hours in hopes of a higher-paying commercial airline gig. In fact, many are like Todd, passionate, seasoned flyers who prefer the more scenic, interactive experience of the flight tour. Says Todd, “I like flying low and slow and looking out the window. I like seeing wildlife. That’s why I didn’t join an airline.”

As 85% of small plane crashes are due to pilot error vs. just 37% of larger aircraft (where mechanical errors are more common), a prop plane flight with a meticulous pilot is probably the safest ride you’ll ever have. Feel free to inquire about your pilot’s track record before stepping aboard. Todd’s? Five years of flying for Northern Alaska with up to four flights a day in peak season and no injuries or fatalities.

I sat in front. In the copilot’s seat to be exact. Todd recommends this vantage point for the nervous flyer because it takes some of the mystery out of flying. It’s one thing to experience turbulence from the back of a dark 747 with no idea what’s going on in the cockpit, and quite another to be right next to the captain. 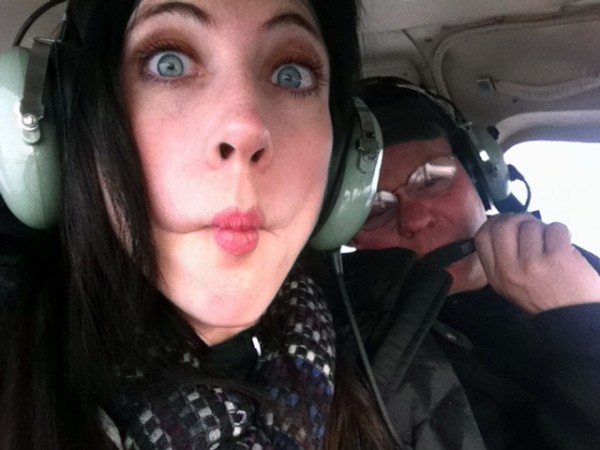 The author and her captain. No nervous flyers here!

From here, I could see that Todd was in constant communication with air traffic control and with the pilot ahead of us, who gave regular updates on wind conditions so Todd could adjust our altitude accordingly. It gave me the reassurance that if something were to go south, we’d have immediate support. Plus, Todd’s steering wheel was recycling-bin blue and resembled a Nintendo joystick. This was all just one big video game!

A flight tour has plenty of distractions. Ours included glacial volcanoes, extinct for millions of years, the snaking Yukon River, and remote, frosty wilderness in every direction. Todd also provided commentary on ice-age Alaska (where the giant short-faced bear ruled at twice the size of today’s largest grizzly) and self-professed corny jokes (“Sure they have running water,” he remarked as we passed over a traditional Athabascan settlement, “If you need water, you run and get it!”). He even had laminated handouts of his own arctic adventures.

In addition to being educational and entertaining, this steady deployment of info is strategic, designed to keep our minds from wandering to the cannibal scene in Alive.

Safety is the tour company’s top priority. Their survival (financially and literally) depends on it. To prepare for takeoff, Todd arrives two hours early to complete the safety checklist found in each of Northern Alaska’s aircraft. “I have a motto that I came up with,” says Todd. “If I’m supposed to check it, I check it once. If it could get me fired, I check it twice. And if it could kill me, I check it three times.”

Pilots also take no chances when it comes to the weather. If conditions are less than perfect, they will postpone or cancel a flight no matter how loudly would-be passengers grumble.

Of course, not all small plane rides are created equal, hence the comparatively high number of accidents (809 on private/corporate small aircraft in 2012 vs. 20 on commercial passenger aircraft, according to Global Incident Map). But when you consider that many of these are the result of private pilots flying beyond their abilities and without the aid of air traffic control, you realize the stats are pretty skewed.

With an experienced pilot and reputable tour company, you should feel as comfortable on a prop plane as you do crossing the street (far more dangerous). I certainly did. So much so that on the way back to Fairbanks, amidst the steady brrrrr of the twin engine, without the aid of valium or Alaskan craft beer, I was lulled to sleep.

[Note: Becky’s trip was sponsored by the Fairbanks Convention and Visitors Bureau.]

Here's When You Can See the Northern Lights in Fairbanks, Alaska

Take a Reindeer Yoga Class at This Ranch in Alaska