THE GALÁPAGOS ISLANDS were less discovered than they were tripped over by a lost Spanish bishop and his entourage in the 16th century, and for hundreds of years they frustrated even the most intrepid adventurers due to their isolation and inhospitable terrain. When Ecuador annexed the archipelago in the 1830s, no one seemed to pay any mind. “It was though Ecuador,” wrote Kurt Vonnegut in his satirical masterpiece Galápagos, “in a spasm of imperialistic dementia, had annexed to its territory a passing cloud of asteroids.”

Since the voyage of the HMS Beagle, however, popular opinion has doubled back. Darwin’s five-week survey of the islands was an early catalyst for his On the Origin of Species, and from that point on the Galápagos Islands have held the fascination of scientists, naturalists, travelers, and the otherwise curious. They are an epicenter of conservancy, research, and adventure, and only a handful of visitors each year are permitted access.

I had the privilege of being invited by Adventure Center and Matador to take a five-day cruise through the islands aboard the Yate Darwin, a ship that’s part of a massive carbon-neutral campaign in the Galápagos. Its wide-reaching effort is the spearhead of a global push towards green travel, and the archipelago is the poster child (geologically speaking, as some of the islands are only 3 million years old) of this initiative.

The beneficiaries of these acts number among the local wildlife, the original inspirations behind yesteryear’s biggest forward-thinkers. They’ve taught us much and continue to do so. Photogenic and curious, these animals don’t hide from much — and they’re naturals in front of the camera lens. 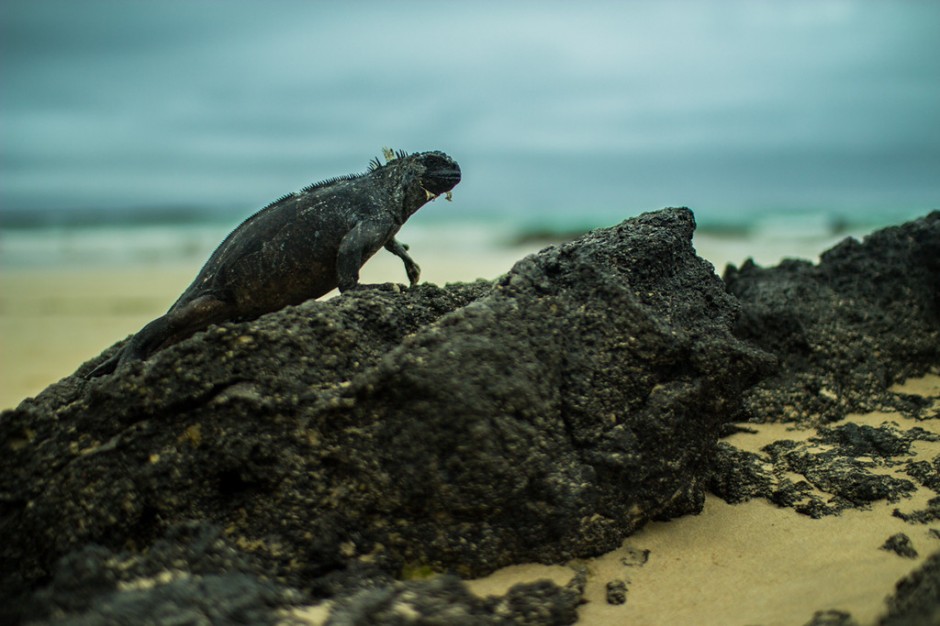 Ubiquitous in groups along the rocky coastline of Isabela, it's less common (though not rare) to see a lone marine iguana sauntering around the beach. At this point the day had cooled significantly, and it was likely sapping the absorbed heat of the black rocks. He wasn't too happy about sharing the space with me. 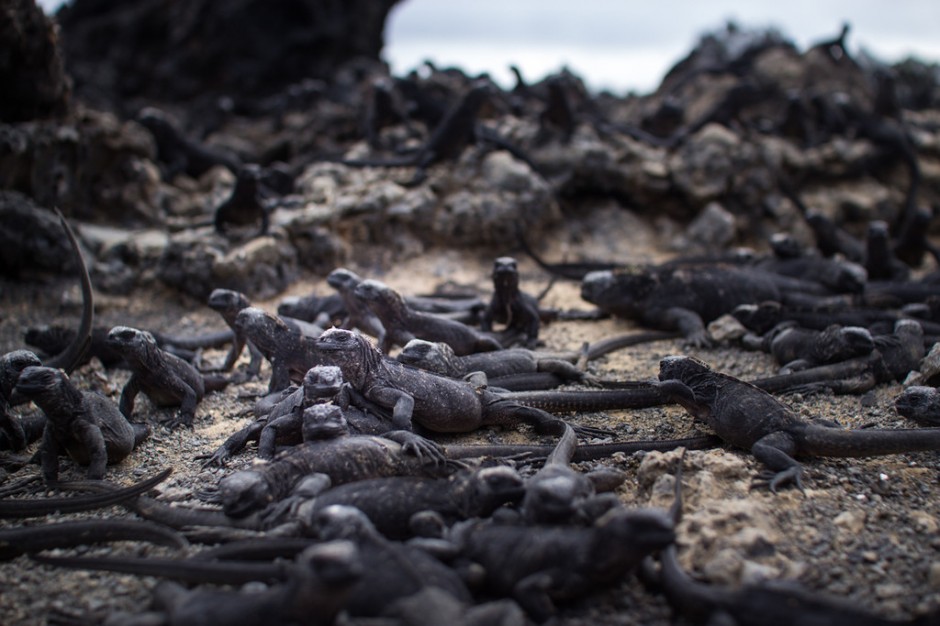 I try to bring a little bit of humor wherever I go, and this shot is a great example. It makes me think of Gary Larson's Far Side, where the joke is often found in inverted situations. I imagine this is what the reciprocal of Godzilla is, according to Larson: a giant human invading a lizard colony. Run for your lives! 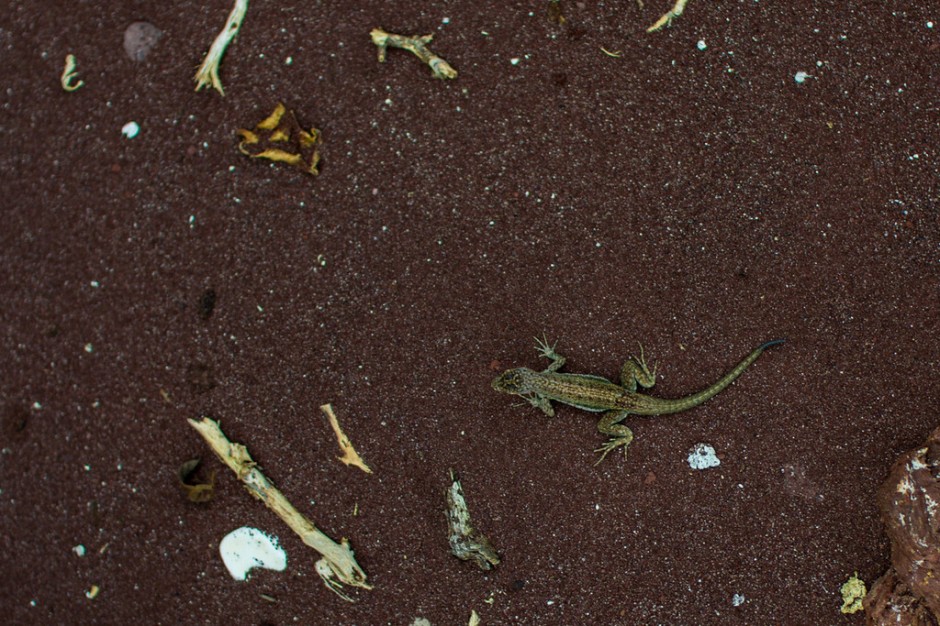 Several of the islands in the Galápagos archipelago are home to endemic species. This lava lizard is one example of over a half-dozen subspecies found only in this region -- this particular animal exists only on Isla Rábida. 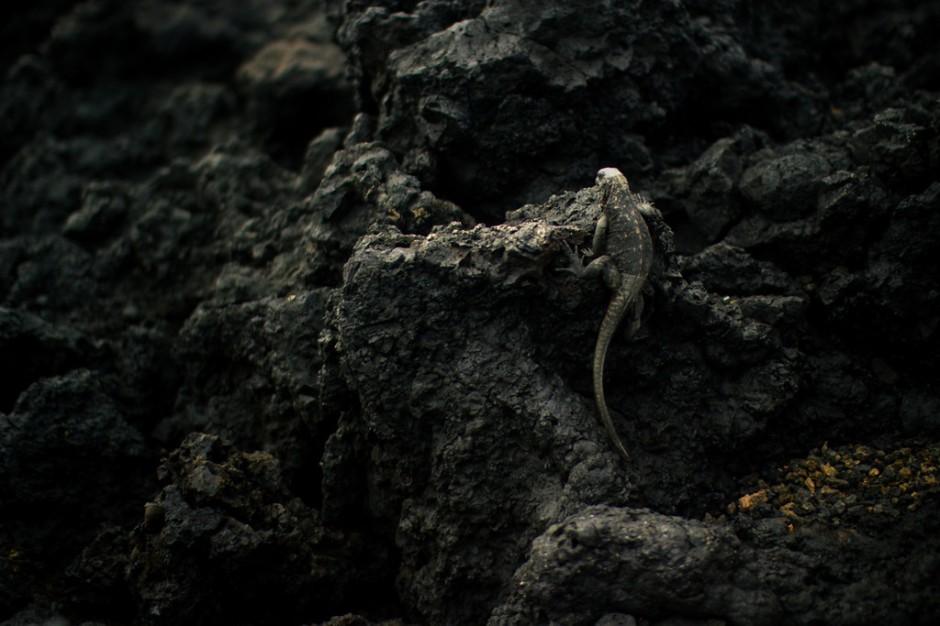 Darwin observed the marine iguana during his visit to the Galápagos, calling them "imps of darkness" and scorning their clumsy movements on dry land. Still, I was impressed when I saw this one scamper up a vertical rock face with little effort. 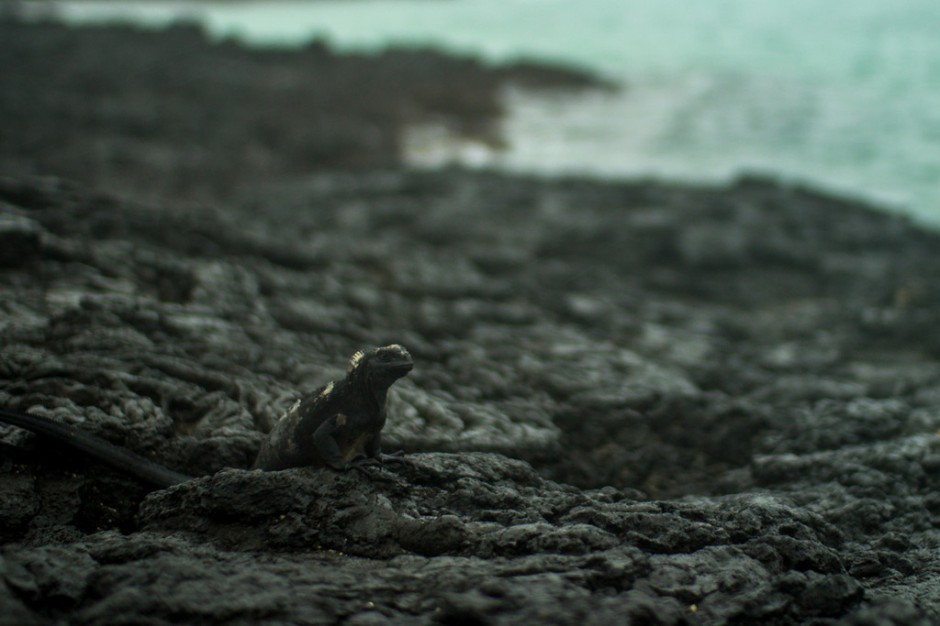 Under flat light and cloudy skies, marine iguanas can be difficult to distinguish from the rocks that surround them. I stopped myself from accidentally stepping on this one's tail before circling it to take this shot. 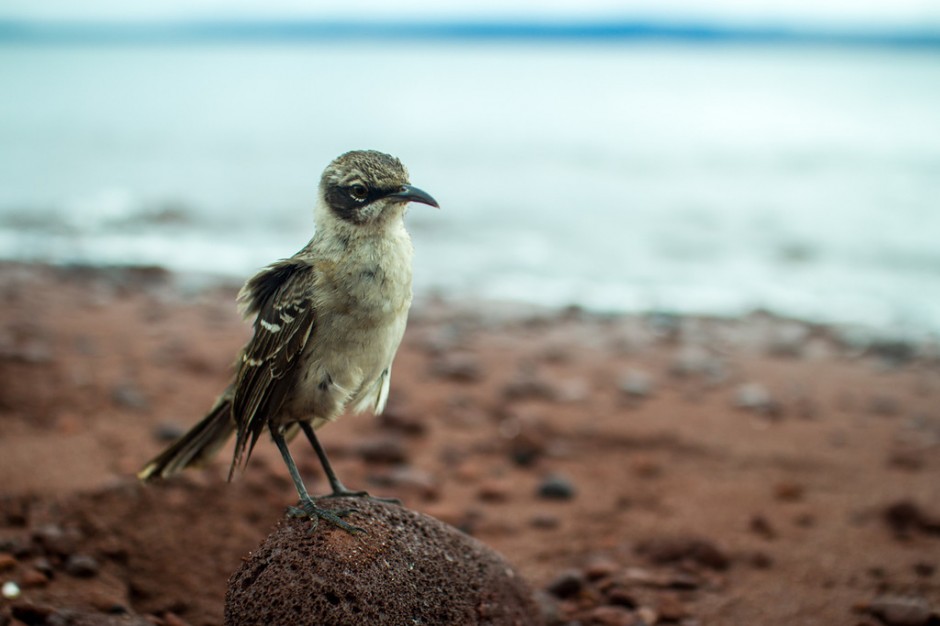 I had heard claims that the wildlife in the Galápagos was indifferent to -- and often curious about -- human presence, but it wasn't until I stuck my lens six inches away from this mockingbird that I knew the brochures weren't making exaggerated claims. He couldn't have cared less. 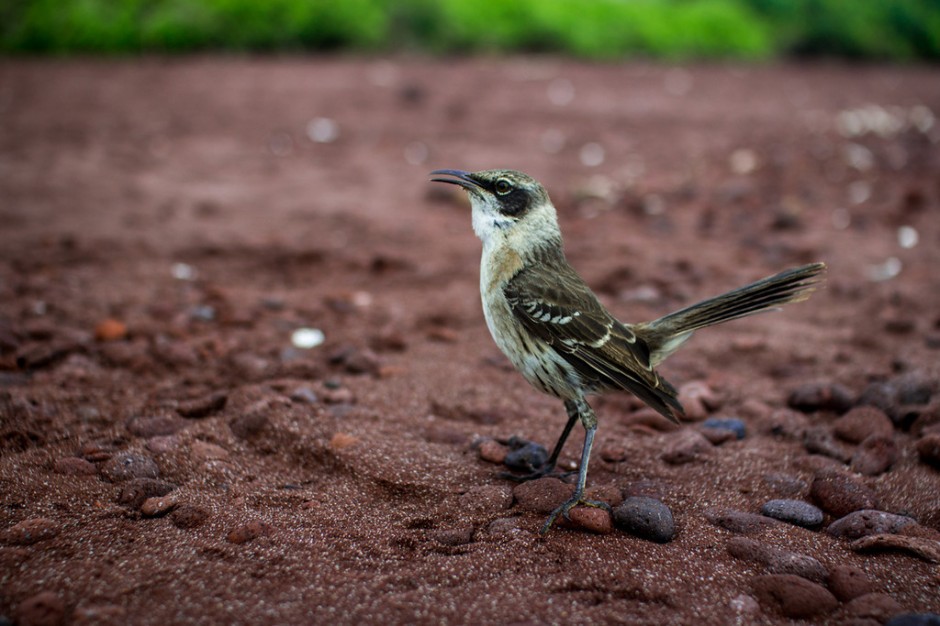 It can be difficult to tell the difference between male and female Galápagos mockingbirds, but this one was definitely a male. How do I know? It's easy: Right after this photo was taken, he picked a fight with another male as the female stood idly by, waiting for the victor. 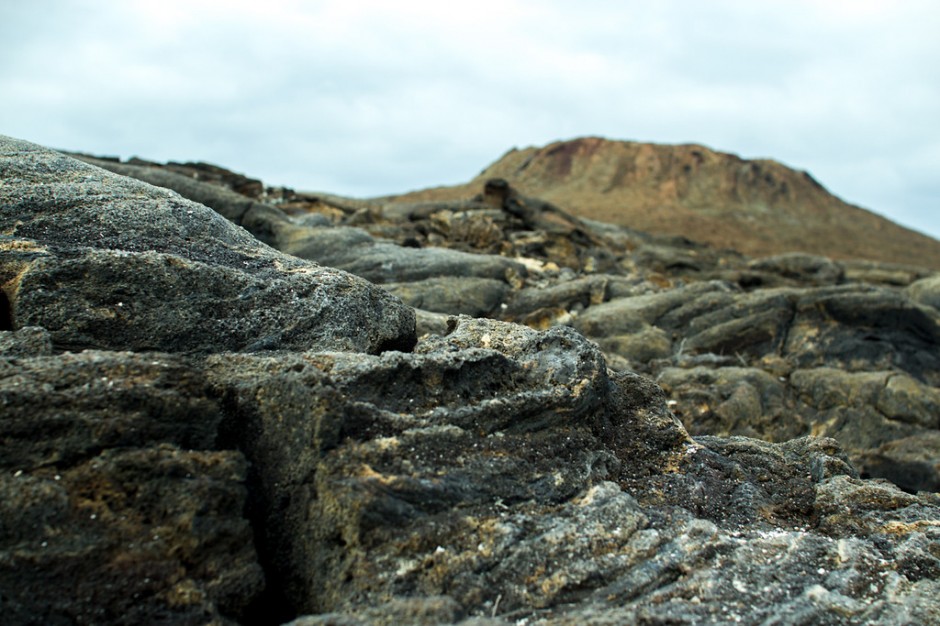 Like Hawaii, much of the land around the Galápagos is rough, rugged volcanic rock and, geologically speaking, very young. Its coarse appearance makes it all the more interesting that so much wildlife calls this archipelago home. 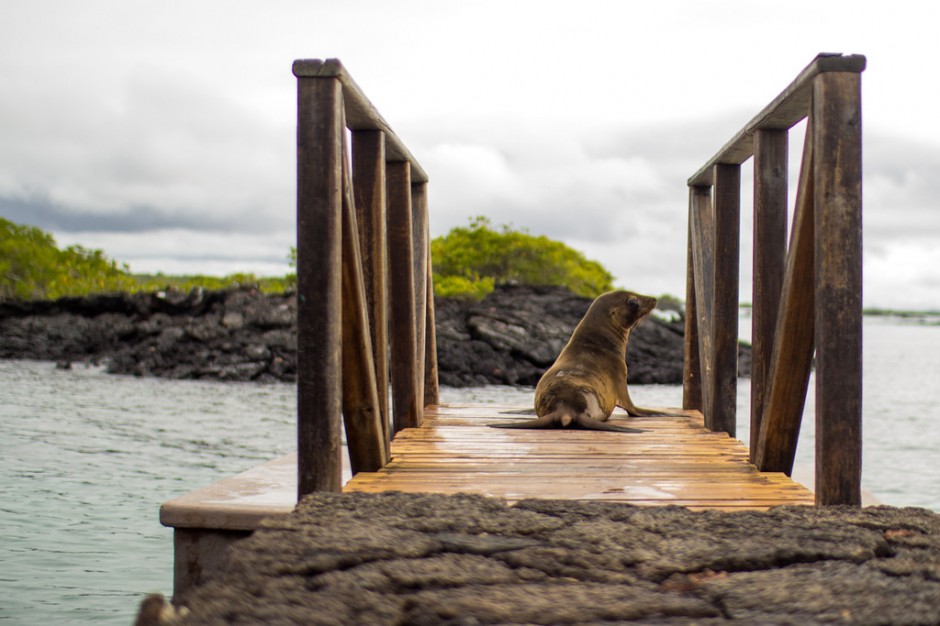 During a landing at Tintoreras, we watched a sea lion pup emerge from the water and collapse on top of two adult (and dry) sea lions, despite their barks and pleas for it to leave them in peace. Our guide explained that sometimes a wet pup will use other sea lions as a towel to warm up faster. On our way back, the same pup was now occupying our dock, and seemed reluctant to get back in the water. 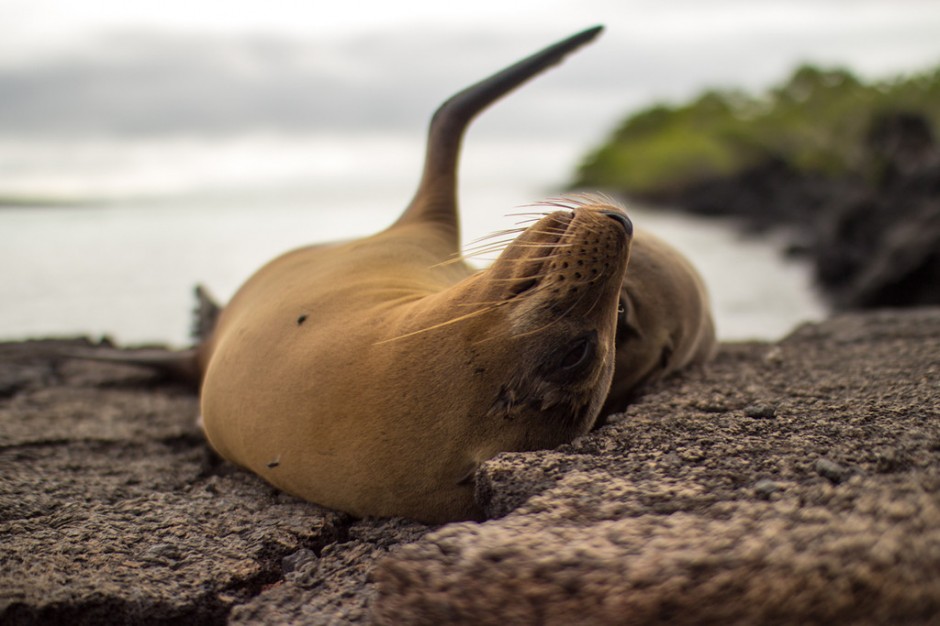 One of the adult sea lions from the aforementioned scene rolls over, probably annoyed because of all the humans walking over it, and from the inevitable wet hug it's about to receive from the sopping-wet pup. 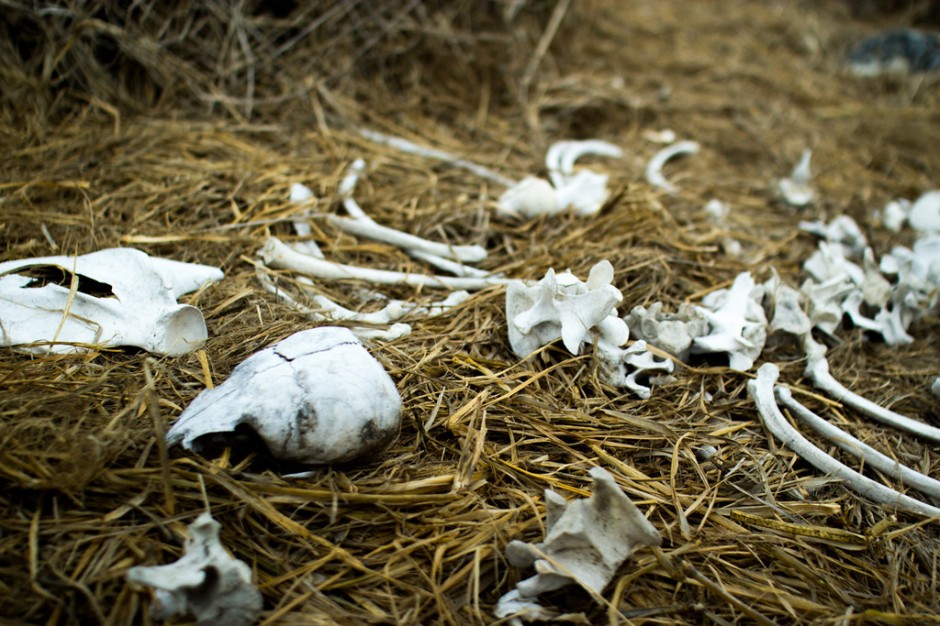 Reminders of the cycle of life are everywhere in the Galápagos. This memento mori marks the final resting place of an adult sea lion. 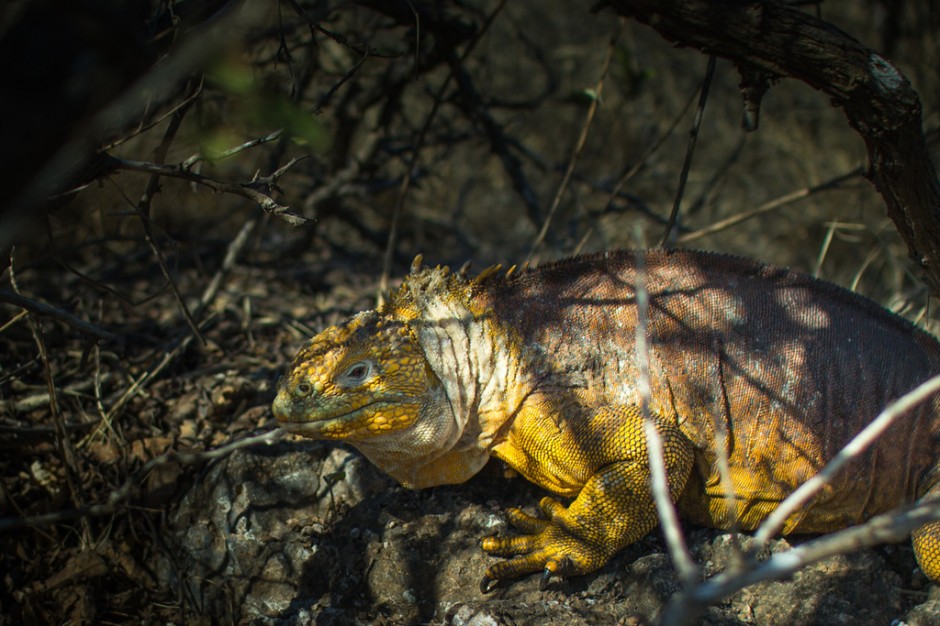 Most of the land iguanas spotted at Cerro Dragon were trying to beat the heat and slip away into the cool of the shadows. Their bright yellow coloring helps them blend in with their tall-grass environment as seamlessly as the marine iguanas do on black volcanic rock. 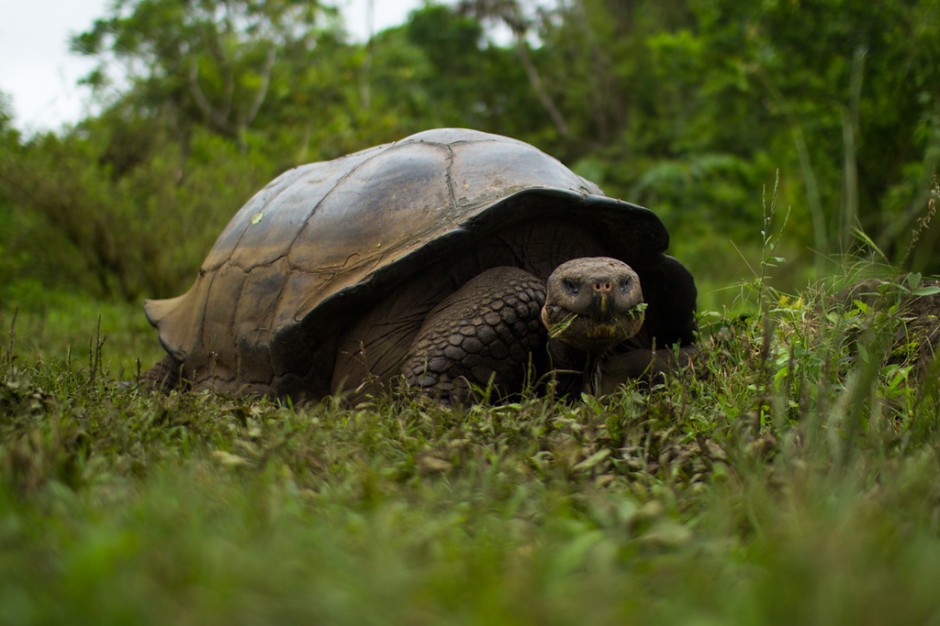 Like the rings of a tree, the age of a tortoise can be determined by the number of ridges in the hexagons on its shell. This tortoise is thought to be a centenarian, because his ridges have smoothed out to the point where his actual age is incalculable. 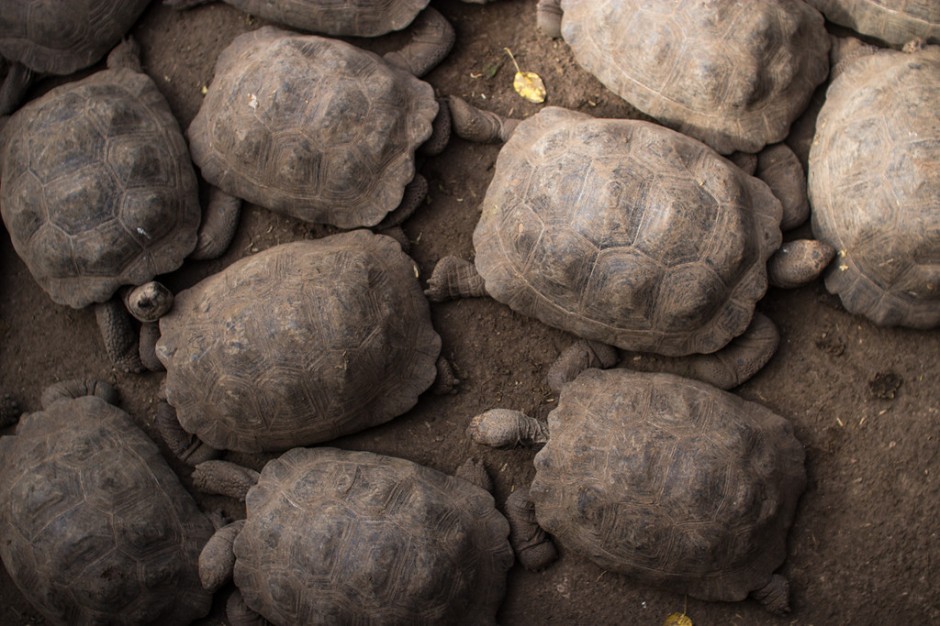 Ridges are more pronounced in younger turtles, like this pile of five-year-olds in a tortoise reserve at Isabela. 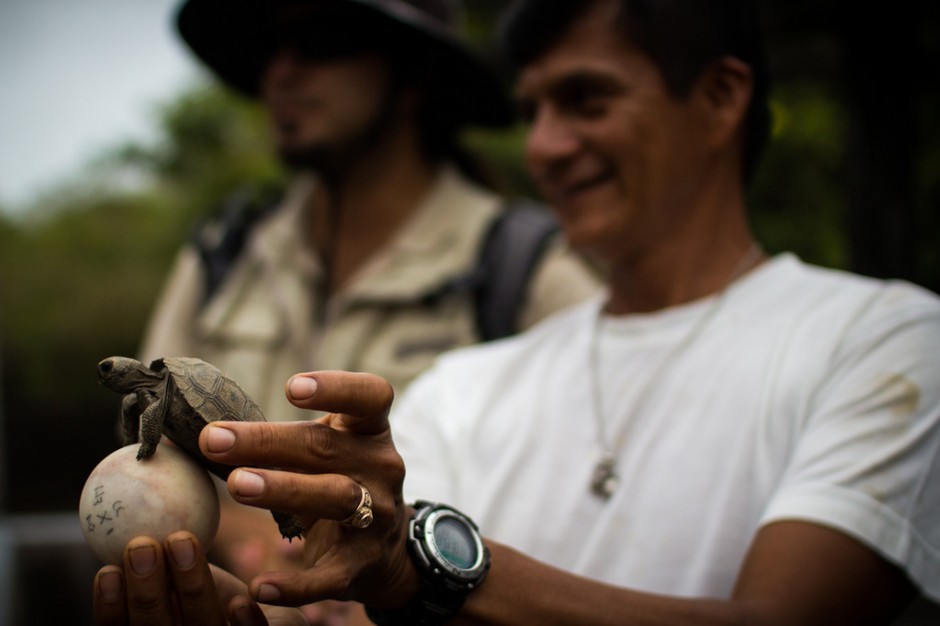 If you've never thought that turtles could be 'cute', let me to introduce you to Donatello. He's two weeks old, and he has no idea who the Teenage Mutant Ninja Turtles are…yet. Good thing I came prepared. 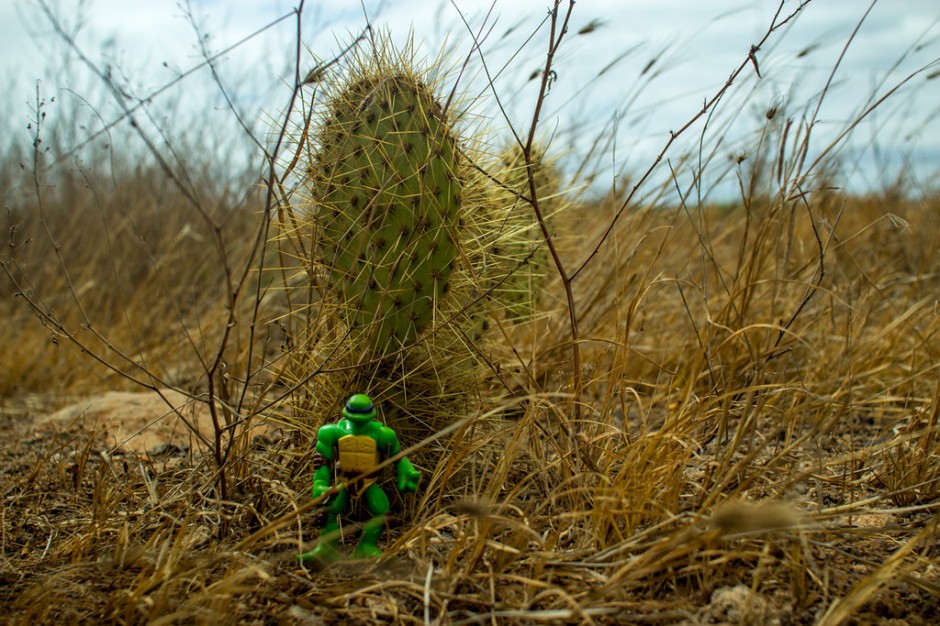 Had I not read Vonnegut's Galápagos before my visit, I would have expected lush, tropical rainforests and lots of vegetation. While there are wet areas on some of the larger islands, most of the landscape, like what's found here on Baltra, is arid. In the middle of the frame is my own Donatello, my travel talisman and patron turtle of lateral thinking and creativity.