Most people looking for the best views from European train windows head to France, Switzerland, Italy, Austria, and/or Germany. While many scenic train routes in these areas are beautiful, the continent’s more popular scenic lines can cost as much as $150 for a one-way journey.

But if you’re willing to live without the spotless carriages, painstaking punctuality, a fully stocked dining cart and clinical efficiency, there’s a journey that offers Europe’s best views, fascinating history, remarkable engineering, and a truly incredible scenic rail experience — all for a fraction of the cost. The train in question doesn’t have fancy marketing or carefully considered branding. Initially created to ferry Marshall Josip Tito’s Blue Train across the mountains, the Montenegro Express has possibly the best scenic train route in Europe. 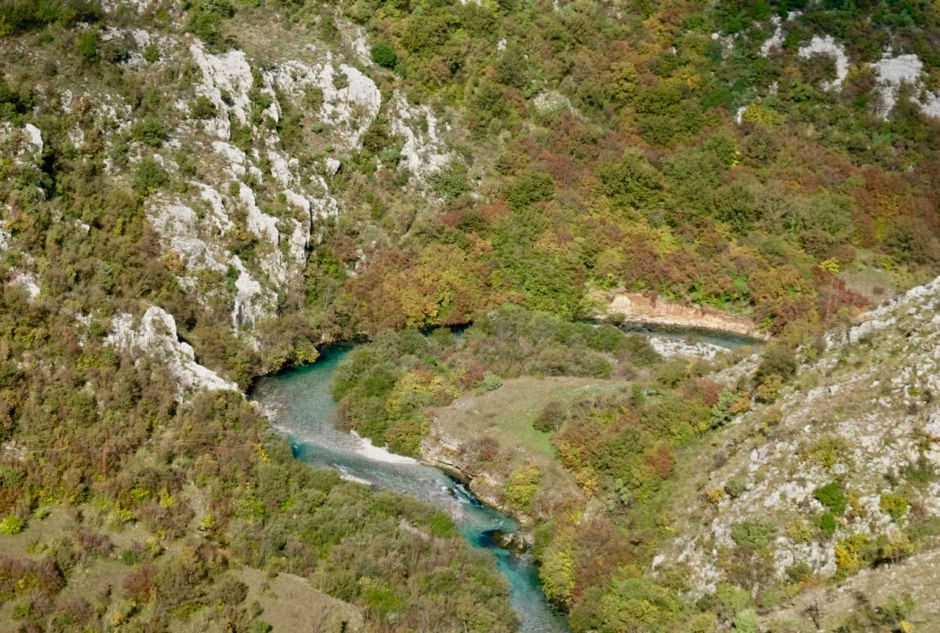 The train left the shores of Montenegro and immediately headed inland. A few moments later the train, the other passengers and I were crossing the serene Skadar Lake. The mountains that we would see for most of the journey came into view, and as the train rose up the side of the cliff, it became clear that this was unlike any other train journey in Europe. 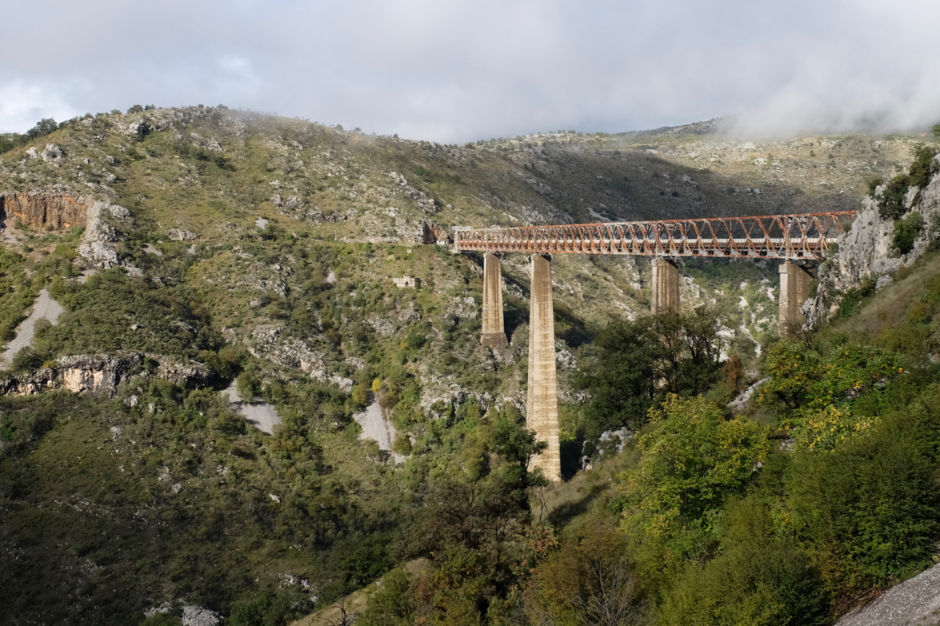 Perhaps the most anticipated feature of the Bar to Belgrade line is the Mala Rijeka viaduct. It was the highest railway bridge in the world until 2001. Riding high across the valley floor with the rusted railings flashing past was exhilarating — even for my fellow passengers who told me they’d taken the journey many times before. 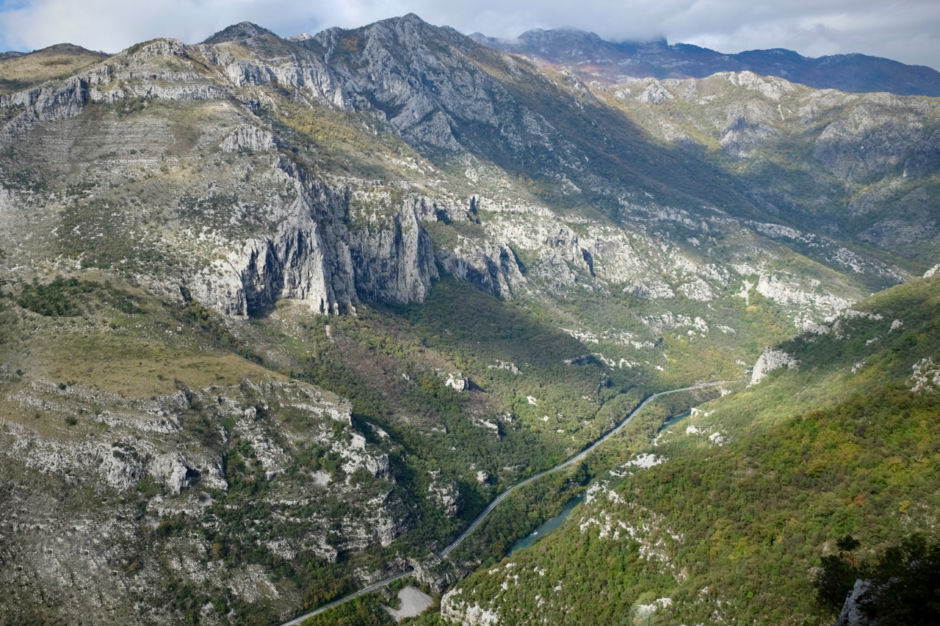 I returned to my compartment and took a seat. Ten minutes later, I noticed a flash of a mountain top out the opposite window and went to see. The road below, that was alongside us just a few moments ago, was now a tiny stripe alongside the once-raging river, and large 18-wheeler trucks now looked like nothing more than toy cars. 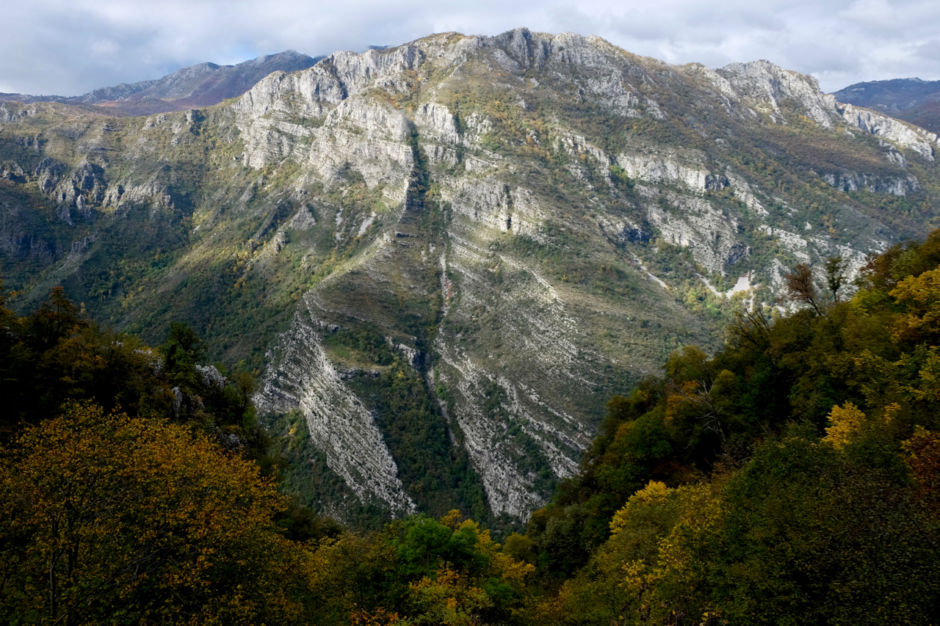 The train continued to gain altitude and the mountains grew even more dramatic. The vegetation suddenly hinted at a change that would become more pronounced around the next corner. 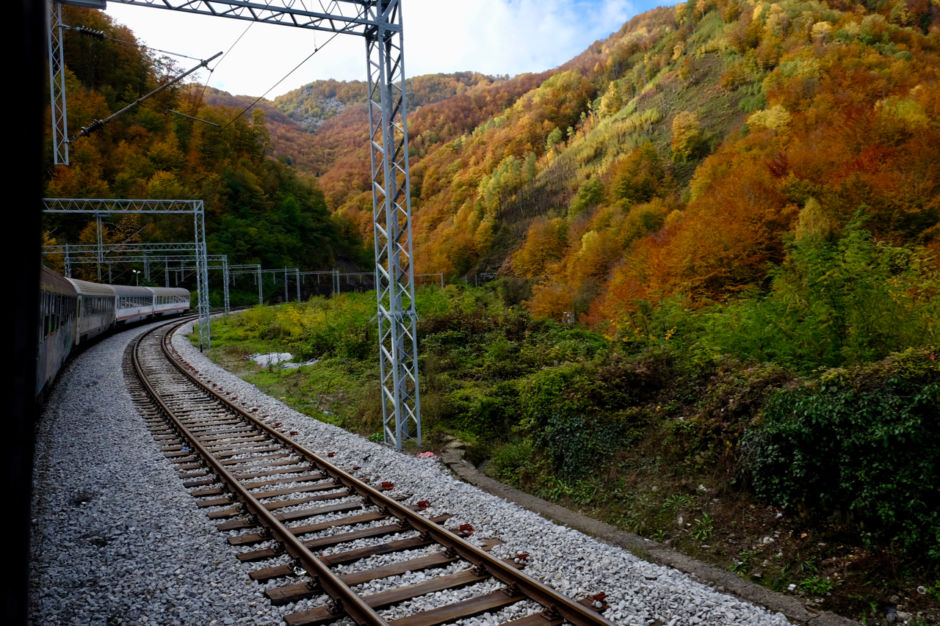 The train whipped through a tunnel and around a corner -- and we were immediately immersed in an autumnal wonderland. I looked for a fellow traveler to share the excitement with, but the train was devoid of outsiders and packed full of commuters who had seen these views many times before. 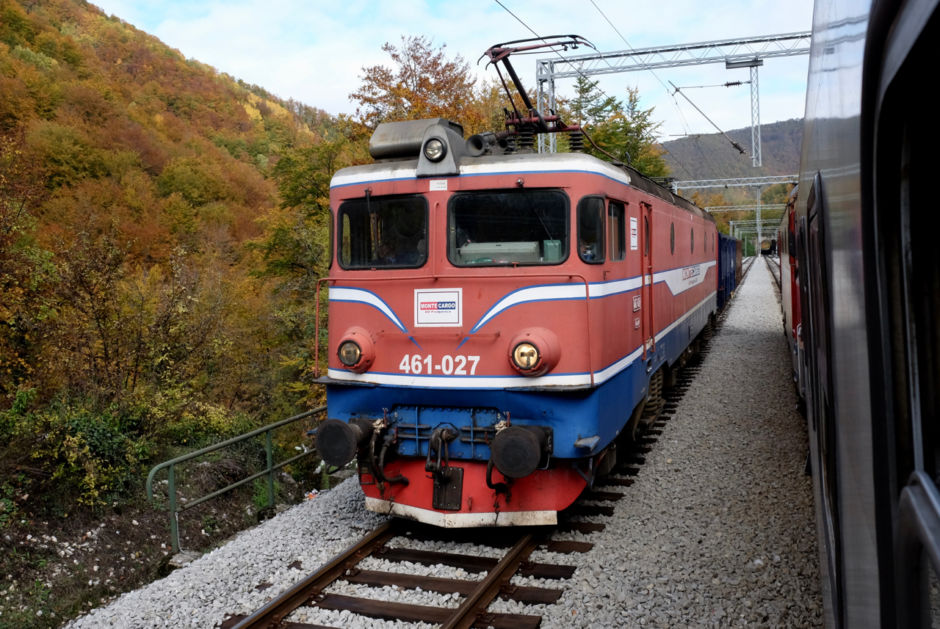 The train made few stops in the first part of the journey, but we paused just long enough at this nondescript station for me to snap a photo of two train drivers catching a nap in the front seat of this cargo train. 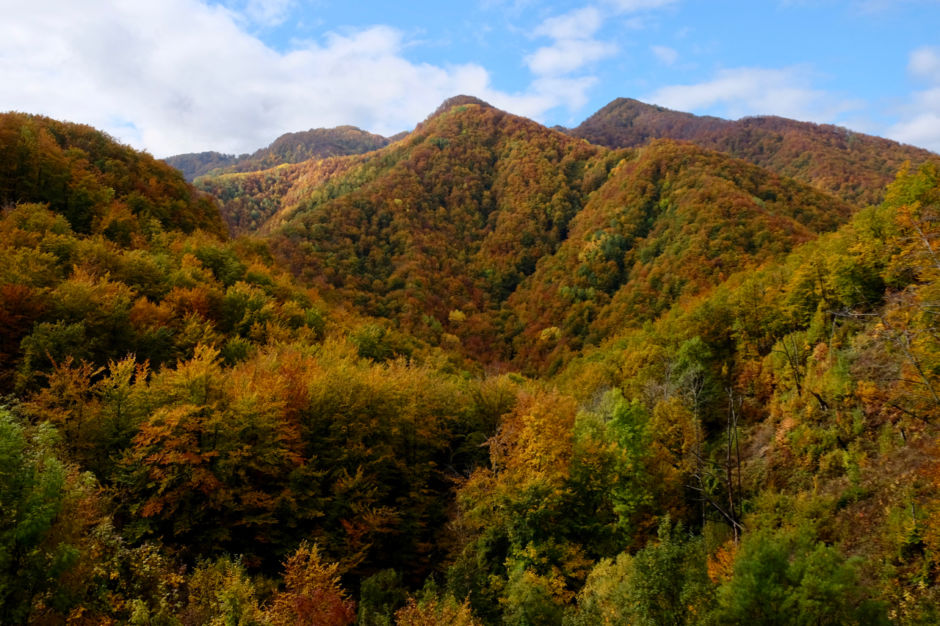 The once stark mountains were now covered in a vast array of orange, red, brown and deep green leaves. I fought the impulse to stash my camera and simply take in the views, and instead took hundreds of mediocre photographs in a desperate and futile attempt to preserve the moment. 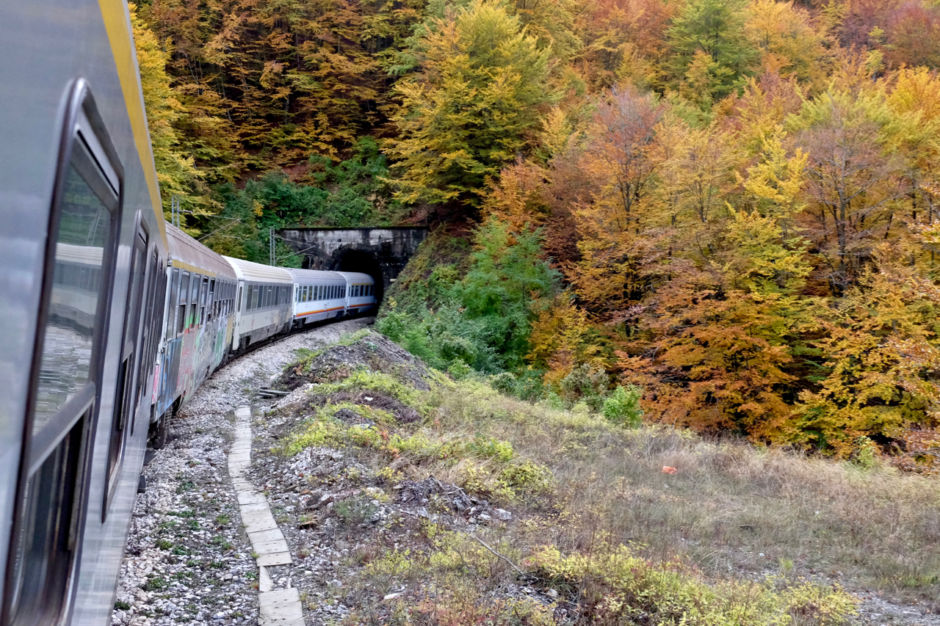 We blasted through a tunnel, one of the 254 along the route, and emerged the other side to this sight. 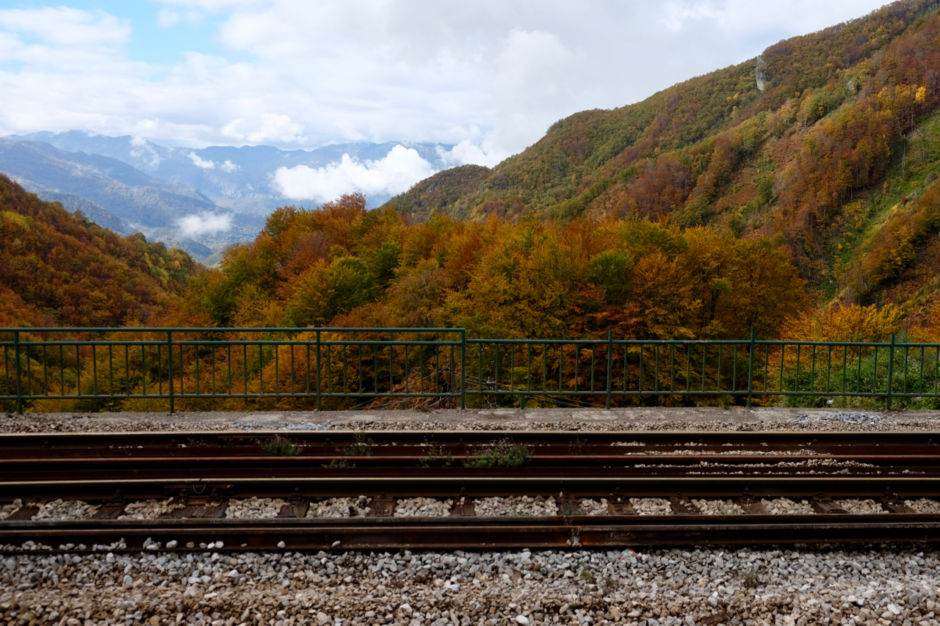 Much of the journey is on a single track, which means sightings of other trains and rail infrastructure is rare. But when you do encounter them, the contrast with the natural beauty is can be jarring. 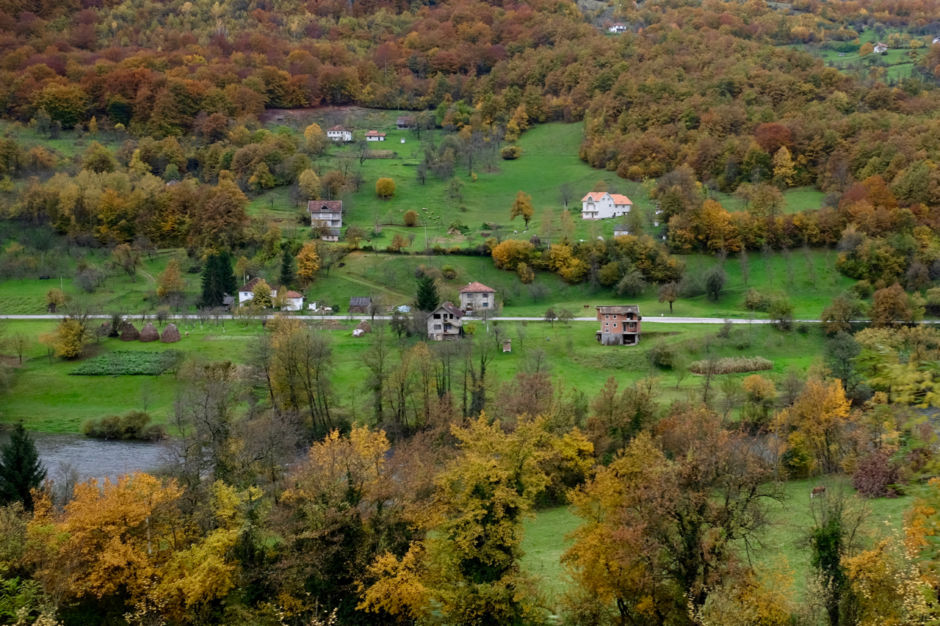 After a few hours standing, my legs grew tired, and the other passengers were starting to look at me strangely. I decided to return to my carriage. The other passengers, I learned, were simply making the necessary commute between the two countries. As we approached Serbia, the scenery began to change again, and small farmsteads like these appeared among the trees. 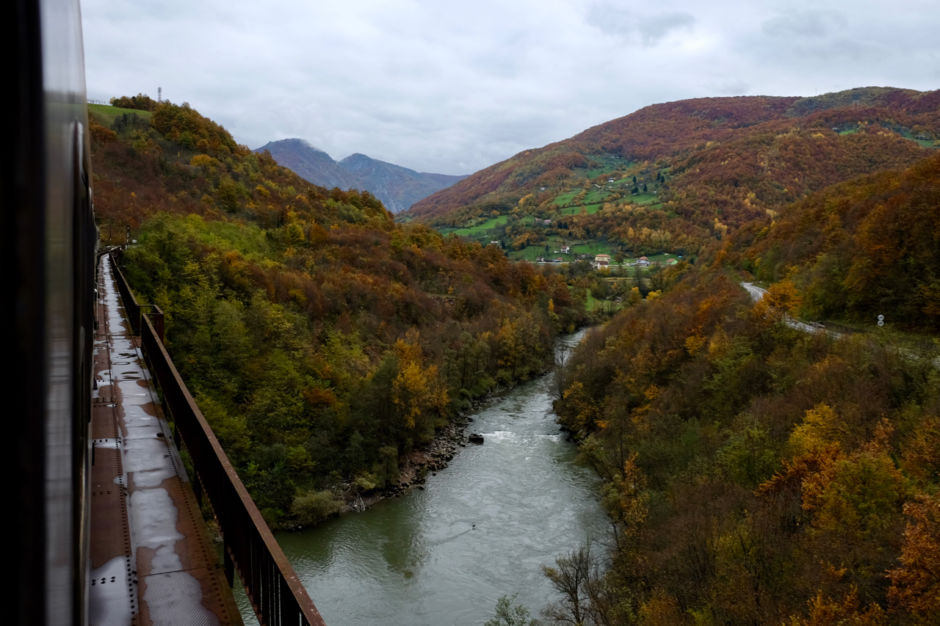 The mountains of Montenegro were fast disappearing, and as we approached Belgrade, we dipped closer to the roads and rivers. 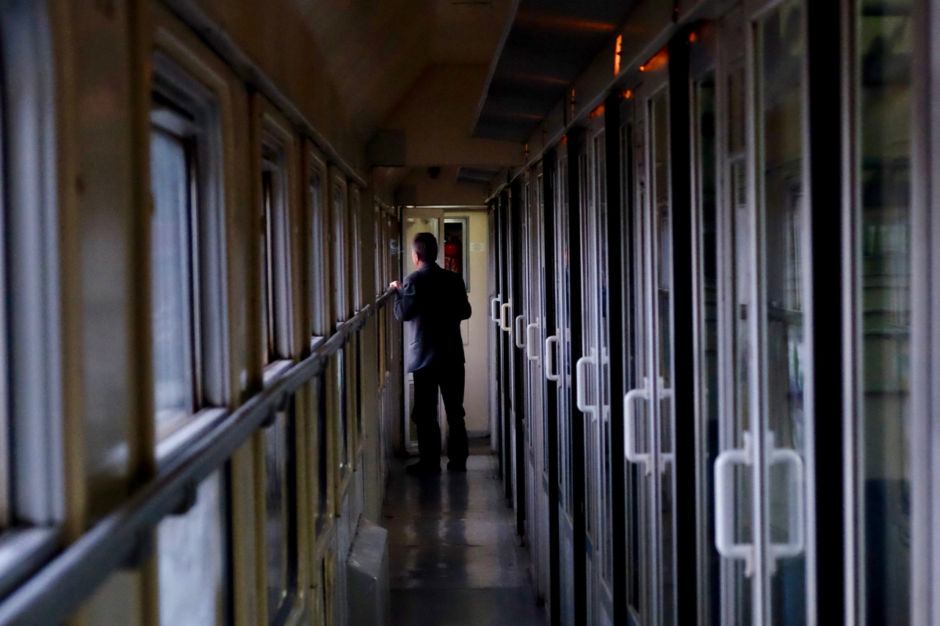 Eventually, the sun set and it soon became too dark for photographs. The train now made more regular stops, slowly offloading and filling back up with passengers looking to get from remote towns and villages to the Serbian capital. This man, one of the few to share the windows with me off and on, was standing where he was simply to smoke a cigarette.

Tagged
Europe
What did you think of this story?
Meh
Good
Awesome