Between the majestic Saint Lawrence River and the craggy Laurentian Mountains lies the region of Charlevoix, Quebec. The region is dramatic. It’s part of the Canadian Shield, which is among the oldest rock formations on earth, moved around by volcanic action over millennia. It left the area with fertile soil, peaky hills, flooded basins, craters, rivers, lakes, the aforementioned Laurentian mountains, and much more. These days it’s also dotted with small farms, cottages, rolling hills, and artist hideaways. Best of all, it’s a 90-minute drive from Quebec City. See why I fell in love so fast. 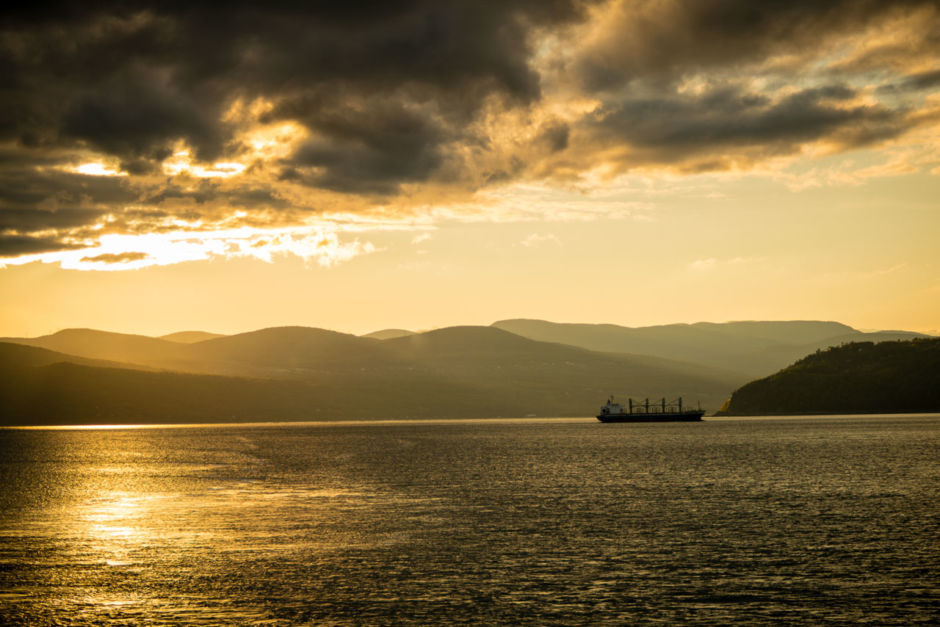 The Saint Lawrence River is one of the most captivating rivers I’ve seen. Looking out, one gets the sense of being along the Atlantic coastal shore. The 750-mile-long river flourishes with 13 species of cetaceans, including blue and humpback whales. It's enormous and powerful. Cruise ships drift along the impressive water that provides the Charlevoix region’s waterside villages with fresh seafood and local artists with unending inspiration. 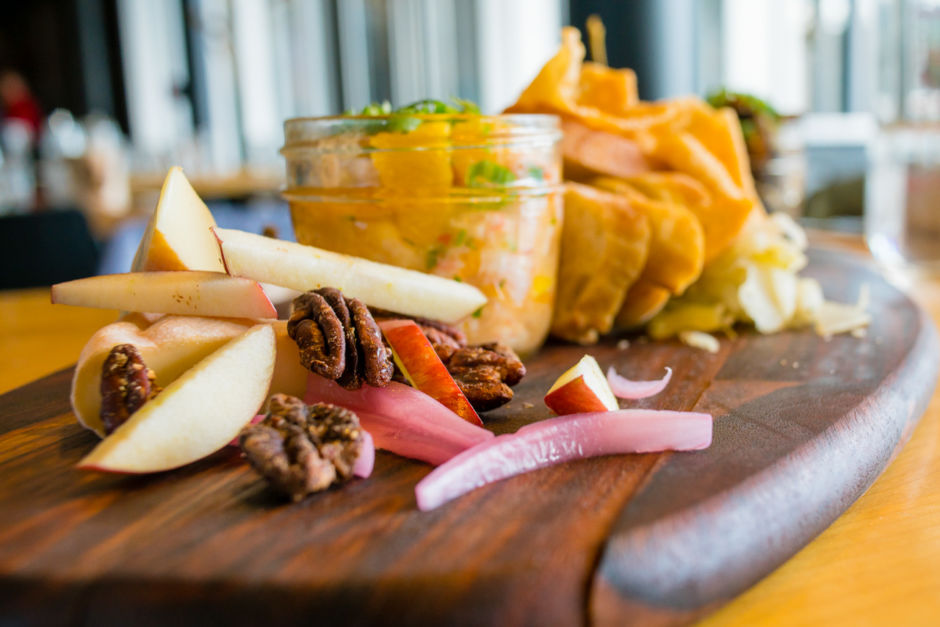 My first meal of the trip was at Le Bercail, one of two cozy restaurants in the hotel Le Germain. Behind the hotel is an organic farm where fruits, vegetables, and herbs are grown and sent straight to the kitchen to be turned into flavorful dishes. The farm also has 15 impressive beehives that produce 600 kilos of honey used in many of the pastry chef’s signature desserts. After filling ourselves with local cheese plates, handcrafted pizzas, and a few decadent desserts we took a stroll through the farm before heading to the pickup station for the Train de Charlevoix - located just outside the hotel. 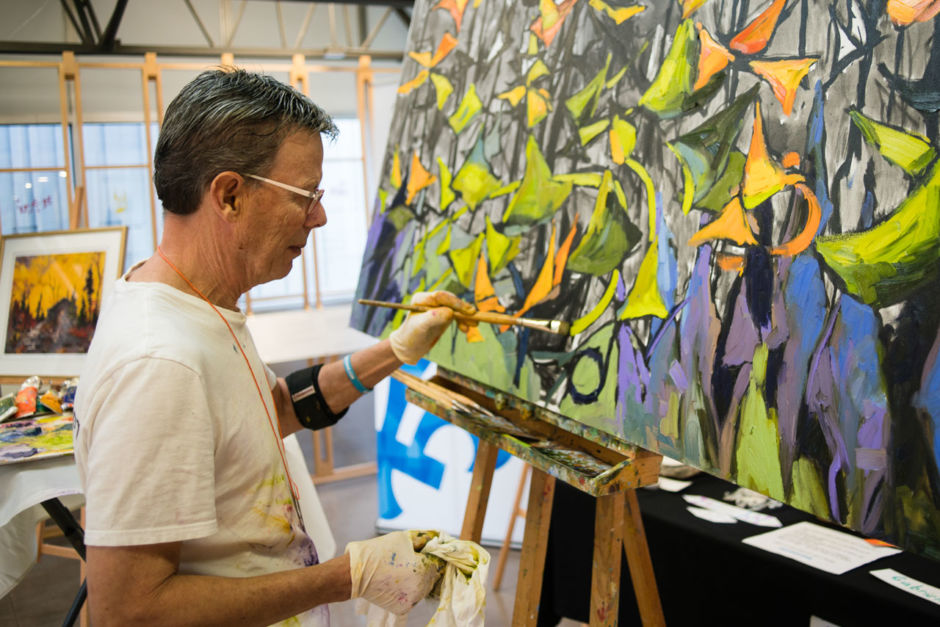 The adorable city of Baie-Saint-Paul sits peacefully along the shores of the river. The town is a well-established artist community boasting a large number of galleries as well as the Rêves d'Automne Festival of Painting each Fall. The smell of fresh pastries wafts down the still-thriving main street filled with cafes and shops. This quintessential northeastern town gives the feeling of stepping into another era. 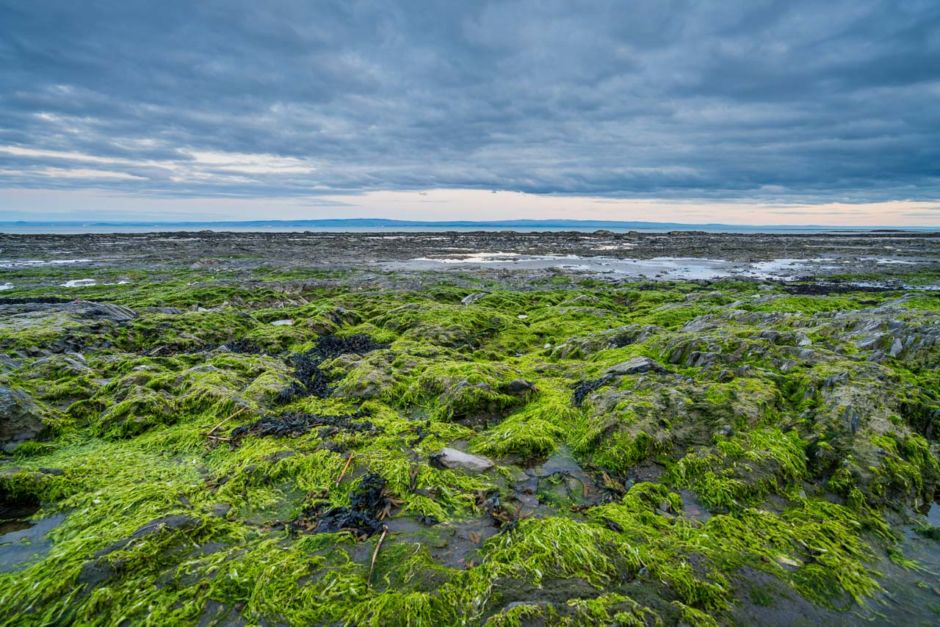 400 million years ago, a giant asteroid careened toward eastern Canada at 25 kilometers per second. Upon impact, it left a 34-mile wide crater with a smooth flat base, perfect for human settlement. Half of the crater is exposed just north of the Saint Lawrence and the other half is covered by the river. The full understanding of this amazing landscape is best seen by plane or at the Observatoire de l’Astrobléme de Charlevoix for an incredible informational experience. 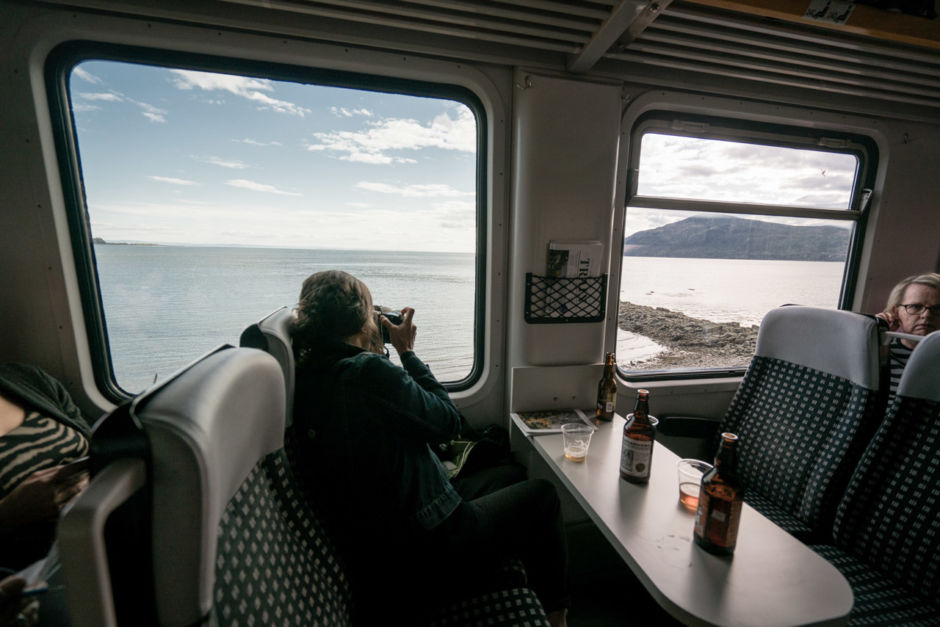 One of the most enjoyable and stress-free ways to see Charlevoix is to board the Train de Charlevoix. The train travels 125 km between Quebec City and La Malbaie, stopping in seven seaside villages along the way. Food and drinks infused with the local terroir are served while the train ambles past dramatic views of the Saint Lawrence. 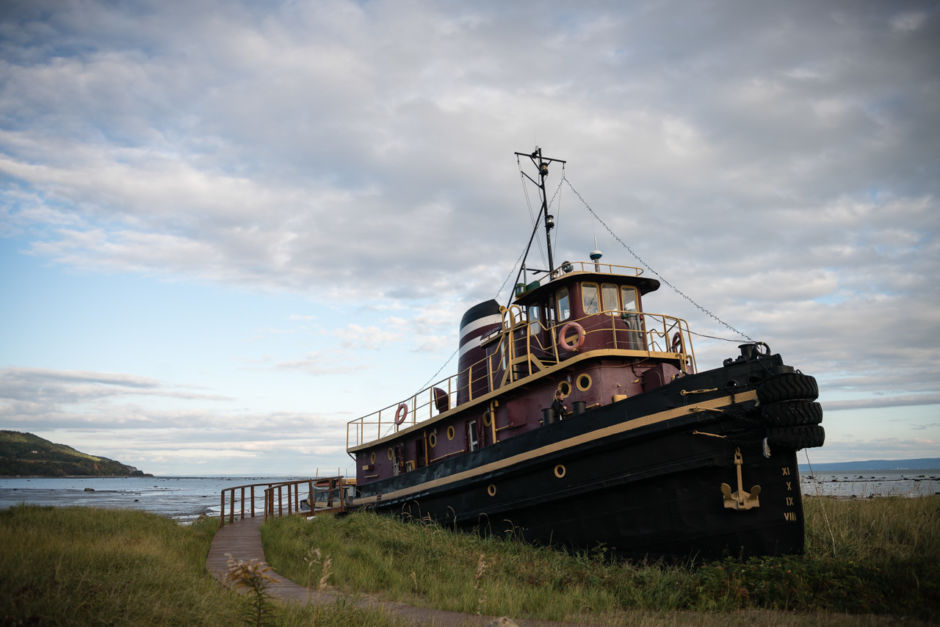 My first stop on the Train de Charlevoix was at the village of St. Joseph de la Rive. The village is surrounded by beautiful trails, old churches, cottages, and the Musee Maritime. The museum is housed in an old shipyard and has wooden schooners dating back to the early 1900’s on display. I found the old relics of once-seaworthy maidens nostalgic and intriguing. The museum has done an exceptional job of preserving these old seafarers, allowing curiosity and stories of their history on the sea to come alive. 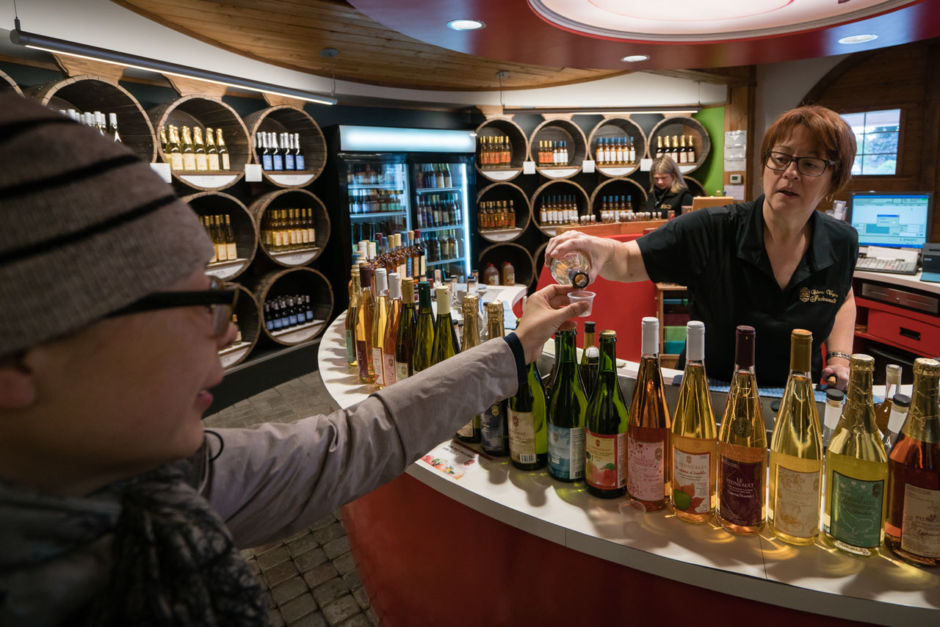 A 20-minute free ferry ride from St. Joseph de la Rive brought me to the beautiful Isle-aux-Coudres. I checked into the historical Hotel Cap-Aux-Pierres for a two-night stay on its serene shorefront property. This friendly island is small enough to bike around on an enjoyable tour of the local cideries and restaurants all in a few hours' time. We visited Cidrerie Vergers Pedneault, a family run cidrerie, producing award-winning ciders, mistelles, and vinegar for nearly 100 years. I made a stop at a Boulangerie Bouchard for some traditional sugar pie before jumping on a bike to loop the island, which is a pleasant and not difficult ride. 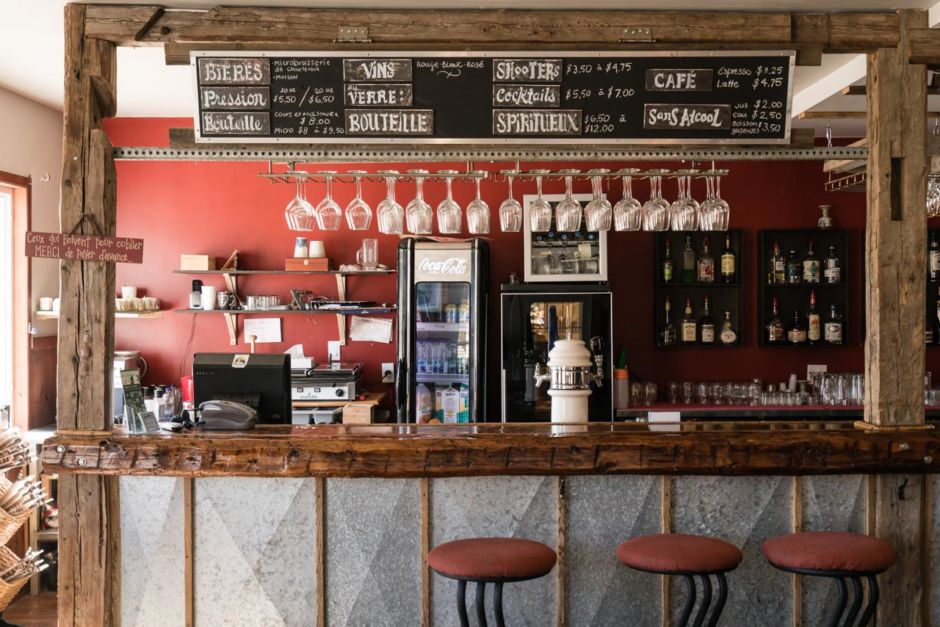 Later that afternoon, on the Isle-aux-Coudres, I stopped in for some local fare at the Auberge La Fascine. This handcrafted eatery doubles as an Auberge - an inn - if you get caught up having too much fun with live music. The whole place carries a laid-back feel that made me want to stay. Seasonal vegetable platters, ample local beers on tap, and the regional staple of poutine (french fries with gravy and cheese curds that turn into melty heaven) are all worth the stop. 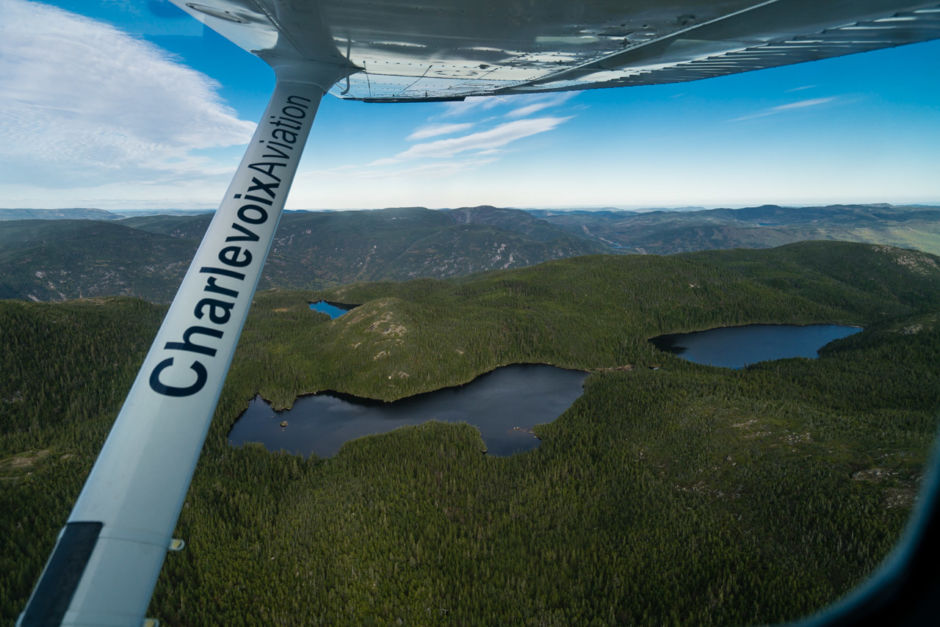 Parc National des Hautes-Gorges-de-la-Rivière-Malbaie is one of two main National Parks that can be found in the region. Enjoying the expertise of local floatplane company, Charlevoix Aviation, I first toured the park by way of sky, skimming past sheer cliff faces, over deep valleys, and the Malbaie River. I took a guided tour on a riverboat up the Malbaie’s dramatic cliff-lined shores the next day, and capped off my visit with a hike on one of the many miles of trails. 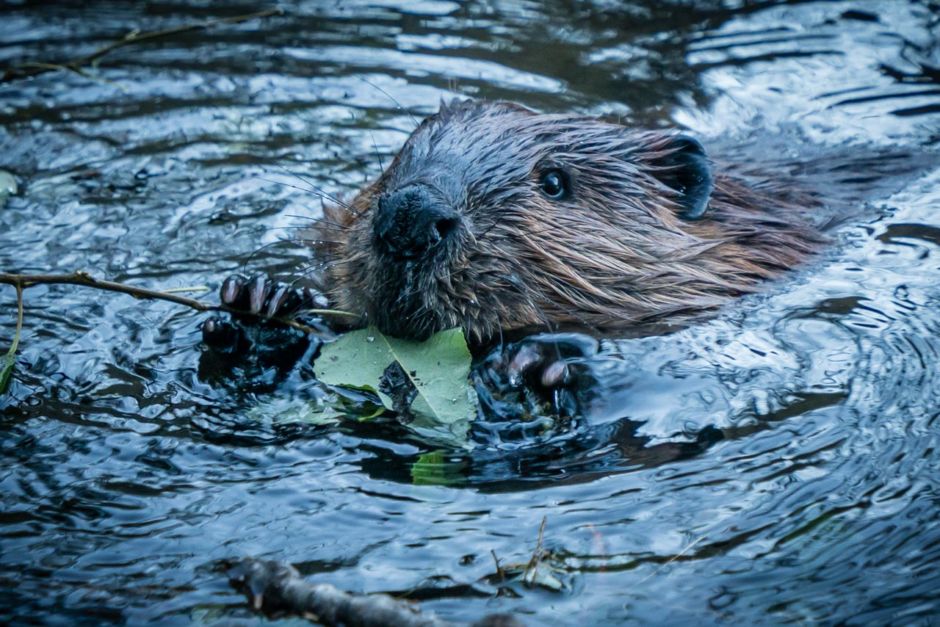 Having heard there was a local outfitter near Parc National des Hautes-Gorges-de-la-Riviere-Malbaie taking visitors on beaver observation trips, I immediately booked a sojourn. Following my knowledgeable guide into the woods to a small pond, I waited patiently to spot one. Le castor, the beaver in French, has been an integral part of the history here as it was one of the largest revenue streams in the 17th and 18th centuries. In fact, beaver were nearly hunted to extinction in the region until demands changed in the early 19th century. With my guide’s expertise, a beaver eventually graced us with his presence and skillfully stripped some poplar branches before swimming away. 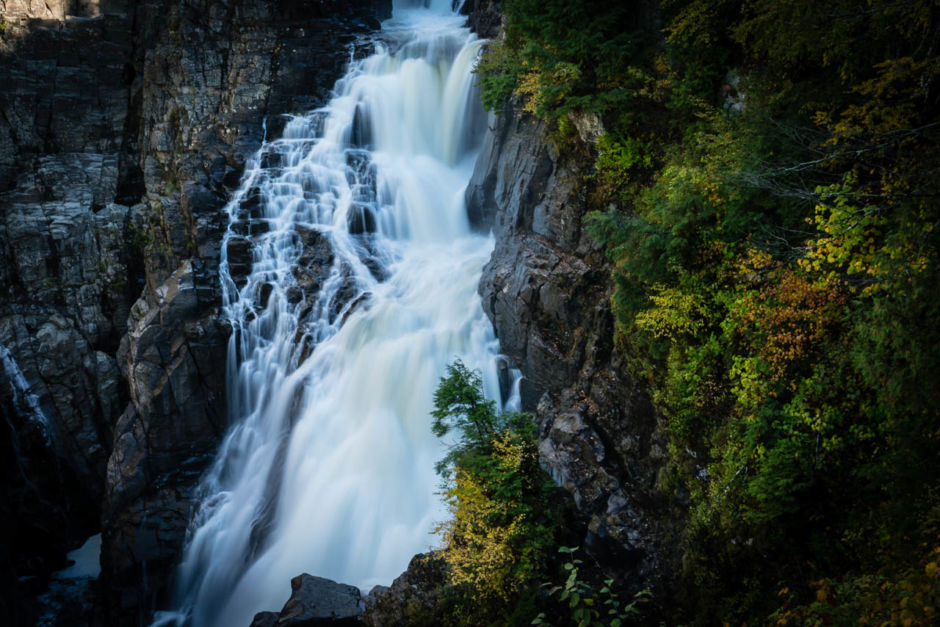 One of the best attractions on the drive from Quebec City to the Charlevoix region is Canyon Sainte-Anne. The Saint-Anne-du Nord river snakes its way through the canyon down a series of magnificent, distinct waterfalls. Visitors are able to meander on well-kept pathways and a variety of bridges and elevated platforms for amazing views of the waterfall. The canyon also has a seated zipline experience. 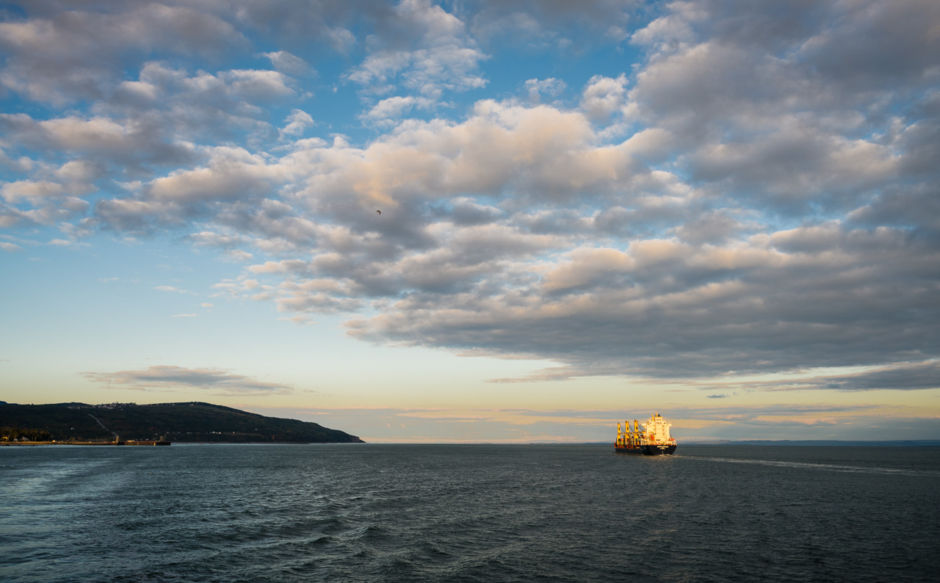 There’s a lifetime of exploration

The Charlevoix region of Quebec left me wanting more. Summer was gone and the crisp smell of autumn was in the air. The color palette of the trees reminded me that winter is coming. Charlevoix is filled with notable winter activities: Mont-Grand-Fonds and Le Massif are just two of the noteworthy ski resorts in the area, while locals and visitors alike can enjoy the 600km of snowmobiling trails, Nordic skiing, dog sledding, and even an ice-hotel nearby. This region is vibrant year-round, which is kind of rare. I am already planning my trip back.

Note: Jesse was a guest of Tourism Quebec.

Highlights of a week in Quebec
Tagged
Galleries Quebec, Canada
What did you think of this story?
Meh
Good
Awesome