What makes landmarks iconic? They’re sites described by adjectives like biggest, tallest, grandest, raddest. They’re instantly recognizable. Their stories are shared in schools and on Instagram (more than three million times, if you’re the #brooklynbridge). Taken together, these stories — of shiny public art, of world-class museums, of historic streets — give an insight into the identity of a nation.

From abandoned prisons and cursed diamonds to psychedelic tunnels and shiny beans, here are 13 iconic landmarks to see in 13 US cities. Some of them are better known than others, but you can get to them all from a Greyhound station near you. 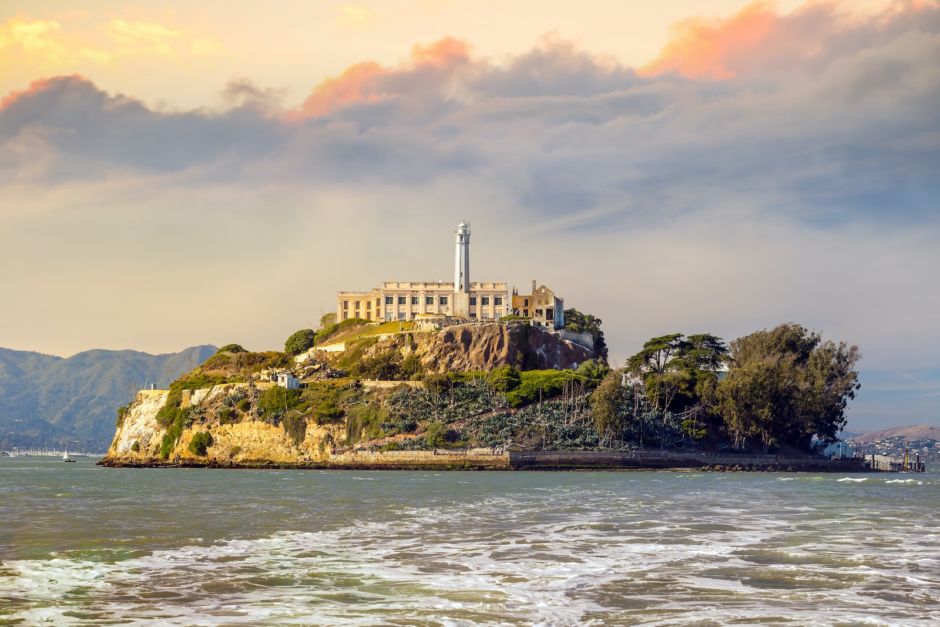 In the 20th century, Alcatraz was home for a time to notorious criminals like Al Capone and Machine Gun Kelly. Long before that, it was a spiritual retreat for the Ohlone. These days, “The Rock” is managed by the National Park Service.

Come via boat from Pier 33, and you’ll soon be greeted by the eerie, graffitied remains of the former maximum-security prison. On the self-guided audio tour, you’ll learn all about the riots, the routines, and the failed swims for freedom that made this jail infamous until its closure in 1963. 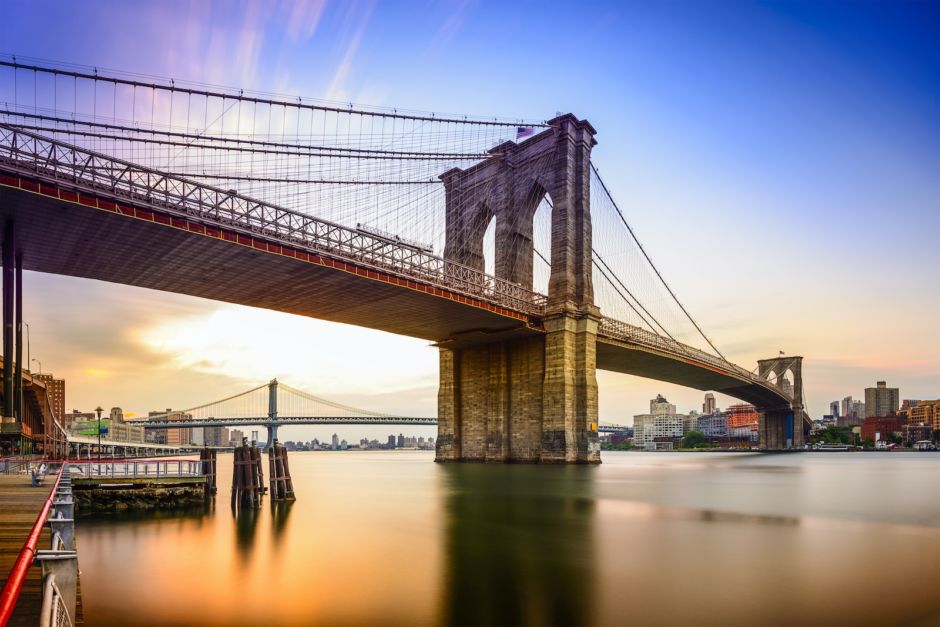 For all those who like their landmarks a little Neo-Gothic, there’s the Brooklyn Bridge, one of the world’s first suspension bridges. Opened in 1883, this was also, once upon a time, the world’s longest bridge, spanning 1,596 feet. Nowadays, the pedestrian boardwalk is a brilliant way of crossing the East River from Manhattan to leafy Brooklyn Heights.

Come at sunset to see golden hour light up one of the most iconic skylines in the world. If you do end up hashtagging your way through the entire experience, you absolutely won’t be the only one.

Greyhound station: The station in Brooklyn is at 206 Livingston St, a 10-minute walk from the bridge. 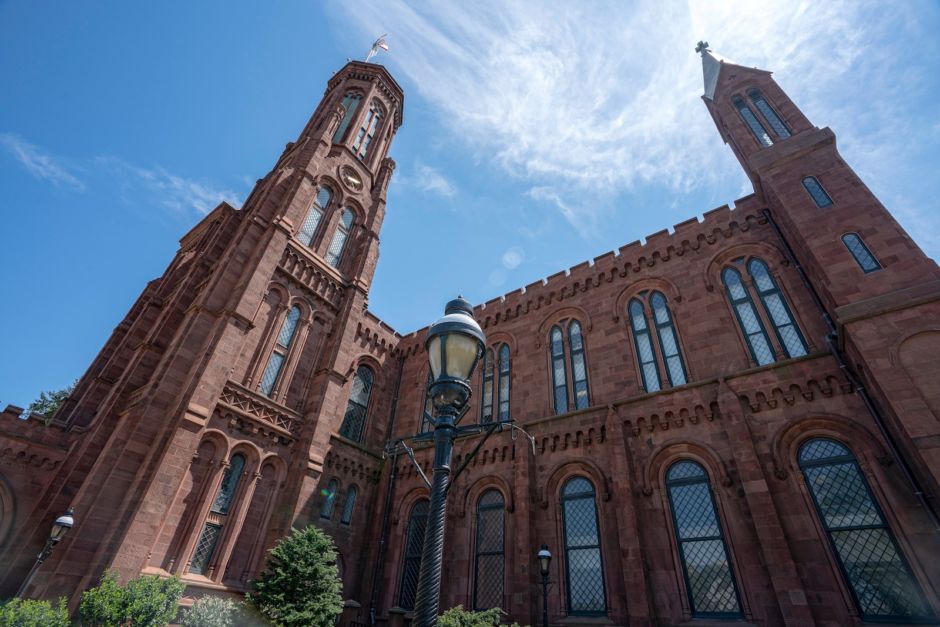 See the blue-toned, 45.52-carat Hope Diamond that’s been said to curse those who possess it (including Marie Antoinette and the mail carrier who ended up delivering it to the Smithsonian). See one of the great dinosaur halls of the world, Easter Island heads, Egyptian mummies, and grand halls devoted to mammals and oceans. This is one of the largest natural history collections there is.

Tip: On weekends especially, the institution does get busy. If you like (relative) peace, come on a weekday.

Greyhound station: 50 Massachusetts Ave NE, near the US Capitol and a half-hour walk along the National Mall to the museum

Travel9 US Cities That Are Super Easy To Explore on Foot 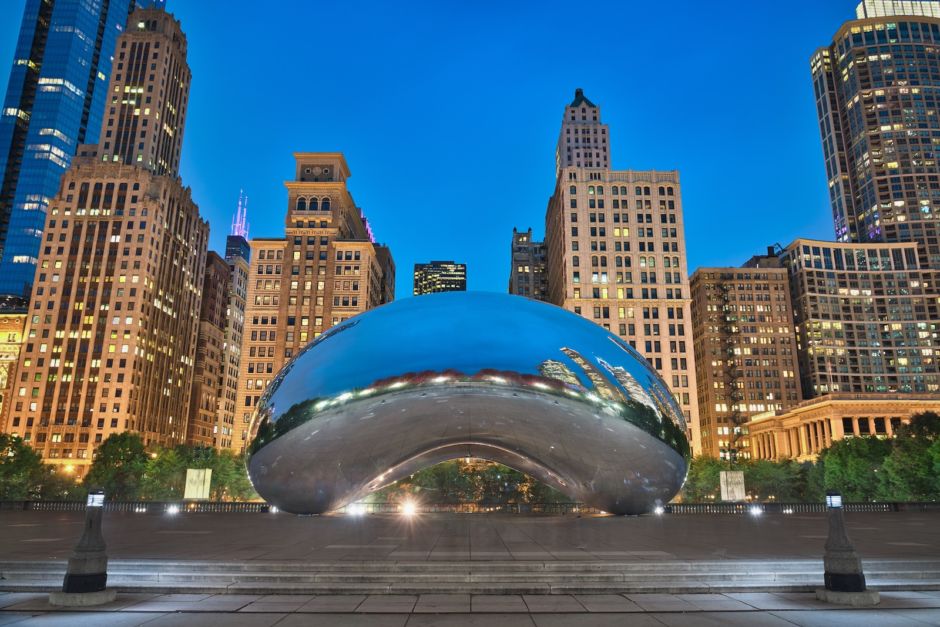 Apologies, Michigan Avenue. But Anish Kapoor’s Cloud Gate has to be the most famous site in this city. Inspired by liquid mercury, the installation looks extra good as the sun rises over Lake Michigan in the mornings.

Wander right up to the Millennium Park statue, a silver bean of stainless steel, to see a distorted yet beautiful version of the Chicago skyline, the ever-changing sky, and the other landmark admirers all around you. 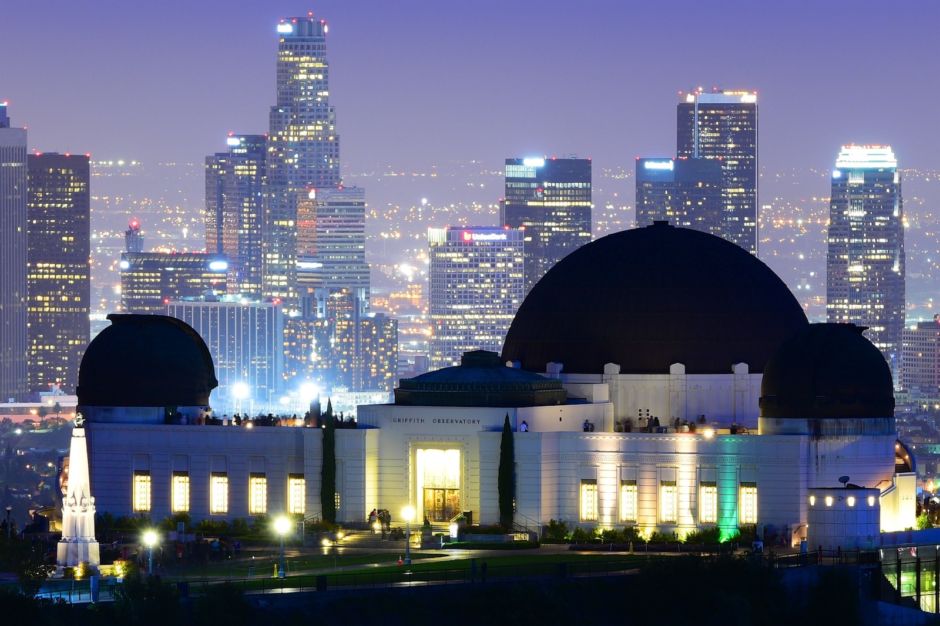 An Art Deco dream in the heart of LA’s Griffith Park, Griffith Observatory is the place for star parties and astronomic talks. It’s also the place to take in views of that iconic Hollywood sign, the sweep of the city’s streets, its mountains and downtown.

The grounds and building are free to wander, and the giant telescopes that are wheeled onto the outdoor lawn on clear nights are also yours to use. To visit the acclaimed Samuel Oschin Planetarium, there is a small fee. 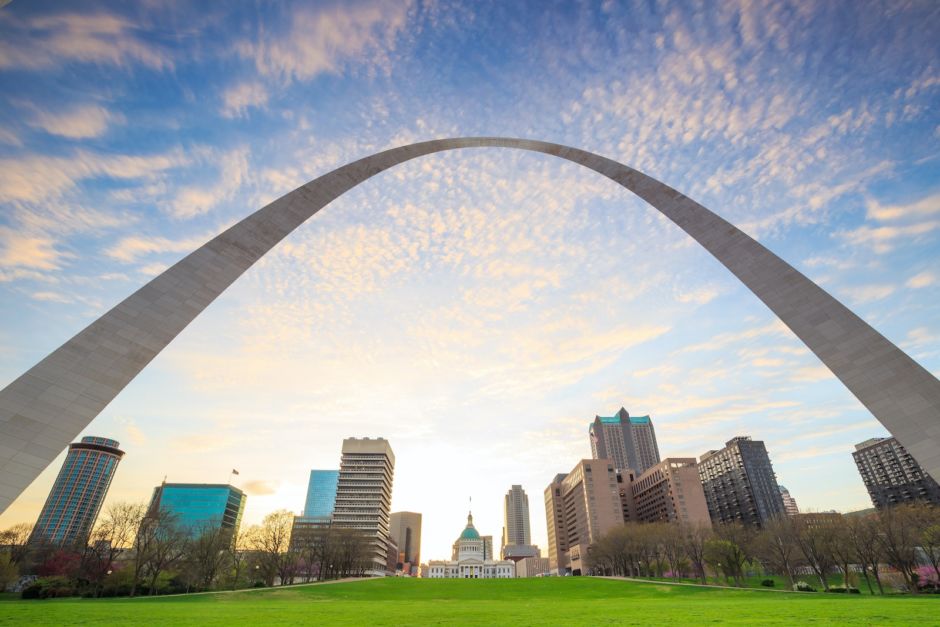 Rising 630 feet into the air, the Gateway Arch is massive. In fact, it’s the tallest human-made monument in the US, concrete and steel soaring up into the Midwestern sky. Take the tram to the top of the arch and see 30 miles in every direction when it’s clear.

When you’re at ground level, it’s also worth visiting the Museum at the Gateway Arch. There, you’ll find exhibits covering American history, from Indigenous and Creole culture in St. Louis to the story of the country’s westward expansion.

Greyhound station: 430 S 15 St, a half hour on foot from the Gateway Arch 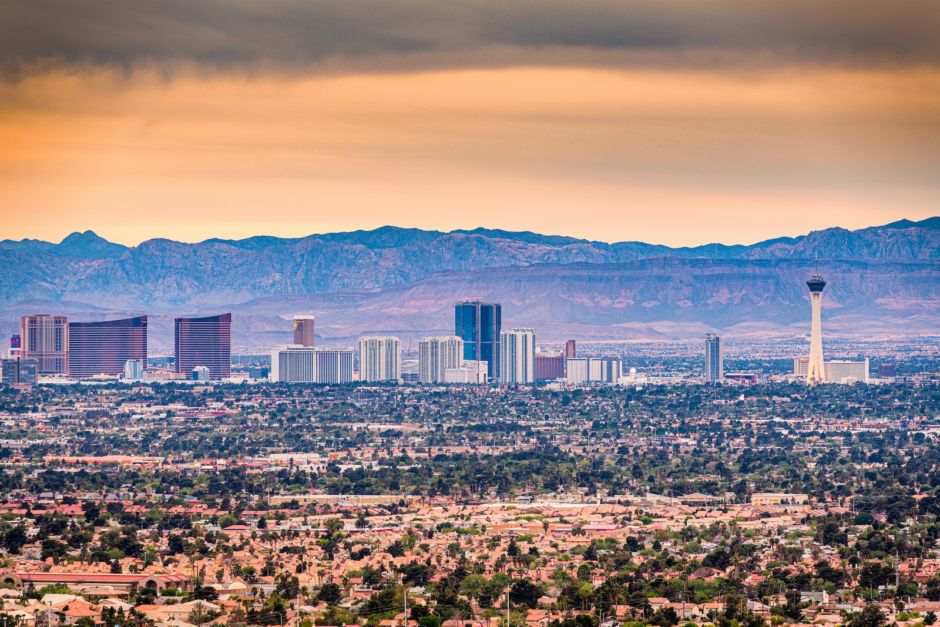 Vegas is home to many tall buildings, but none is taller than the Stratosphere Tower, aka the Strat, at the north end of the Strip. It’s 1,149 feet straight up, known for its glossy viewing decks, its revolving restaurant, and its cocktail bar. So far, so Vegas.

The Strat is also known for thrill rides like the Big Shot, which catapults you 160 feet into the air, and the SkyJump—a kind of controlled bungee that involves leaping off the building and falling for 855 feet at speeds of about 40 miles per hour, before slowing down near the end to land with your feet on the ground.

Travel8 Awesomely Diverse US Cities (and Why You Should Visit) 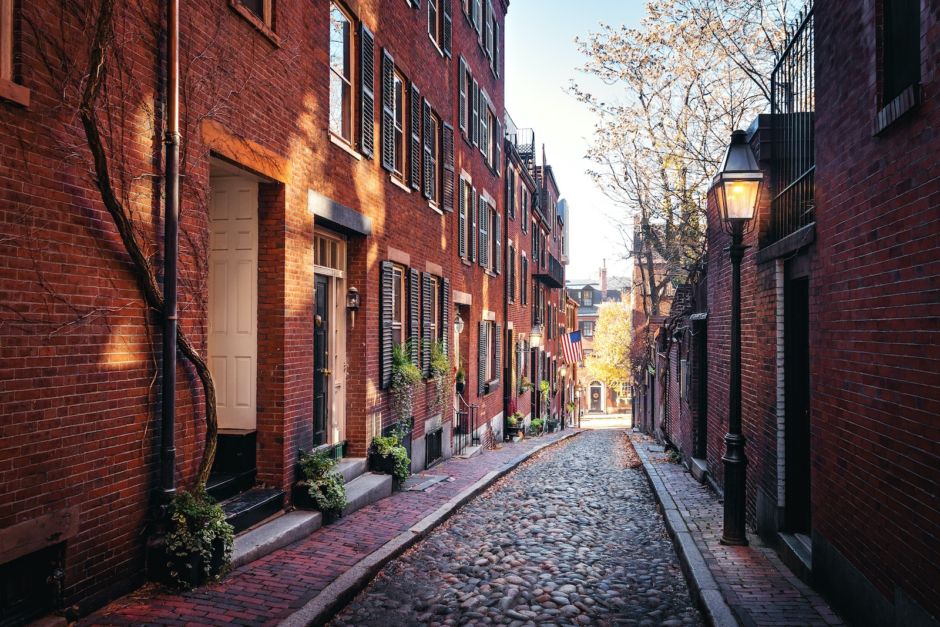 Located in the historic Beacon Hill neighborhood, famous for its jumble of Greek Revival and Victorian architecture, this is Boston’s narrowest street. It’s also very pretty. As such, it’s very photographed.

Come and see Acorn Street’s 19th-century vine-strewn homes, its fenced-in gardens, and real cobblestones. Take so many pictures, but do be considerate of the people who live here.

Greyhound station: 700 Atlantic Ave, a 20-minute walk from Acorn Street (you’ll pass through Downtown and the Boston Common to get there) 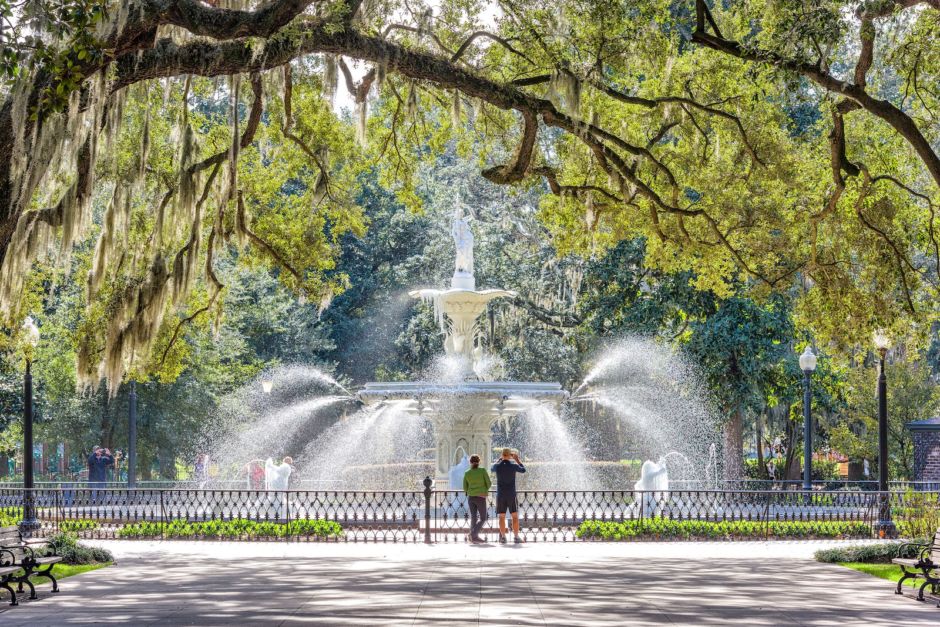 Covering 30 acres, Forsyth Park—dubbed the Central Park of Savannah—is where you might find outdoor concerts and art shows taking place. You’ll likely see glorious light gleaming through the Spanish moss-draped oak trees. And you’ll definitely spot those benches by the cast-iron fountain, under those gleaming trees, a very inviting place to picnic indeed. 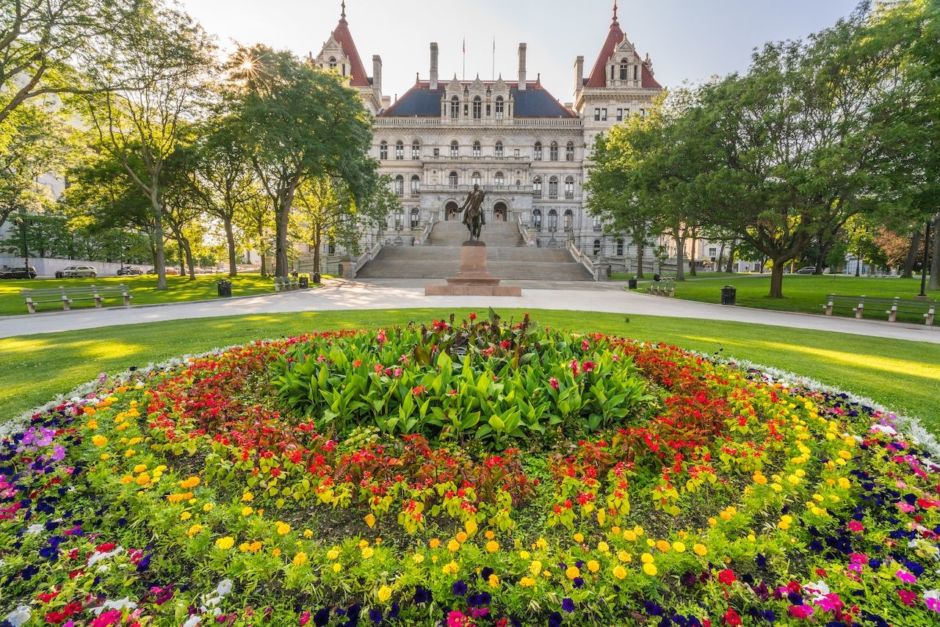 Many call this the most beautiful state capitol in the country, if not one of the most beautiful buildings, period. It was the most expensive government building of its time, costing $25 million to construct between 1867 and 1899. Visit the Million Dollar Staircase, the War Room, and the Senate Chamber, and you’ll see what the Versailles-level fuss is about.

Greyhound station: 34 Hamilton St, about a 15-minute walk from the capitol 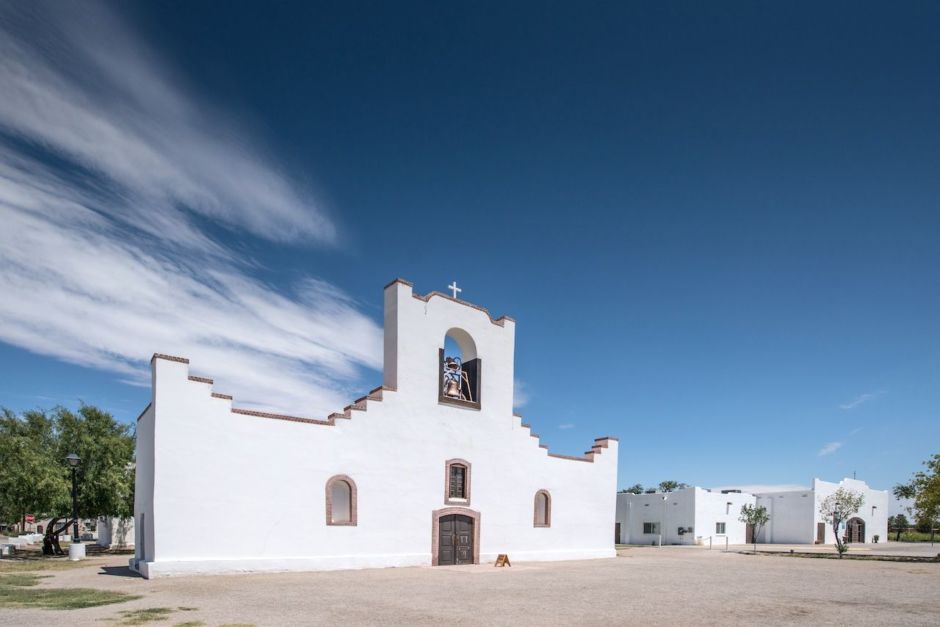 You’ve probably heard of the Alamo, the most famous of the missions in another Texas city, San Antonio. But El Paso’s Mission Trail is just as impressive—with fewer crowds.

Why is it so impressive? The nine-mile stretch contains the state’s two oldest missions—Ysleta dates back to 1680! The trail also includes a museum, historic jail, and the San Elizario Historic Art District. Go early, as the missions close by mid-afternoon. 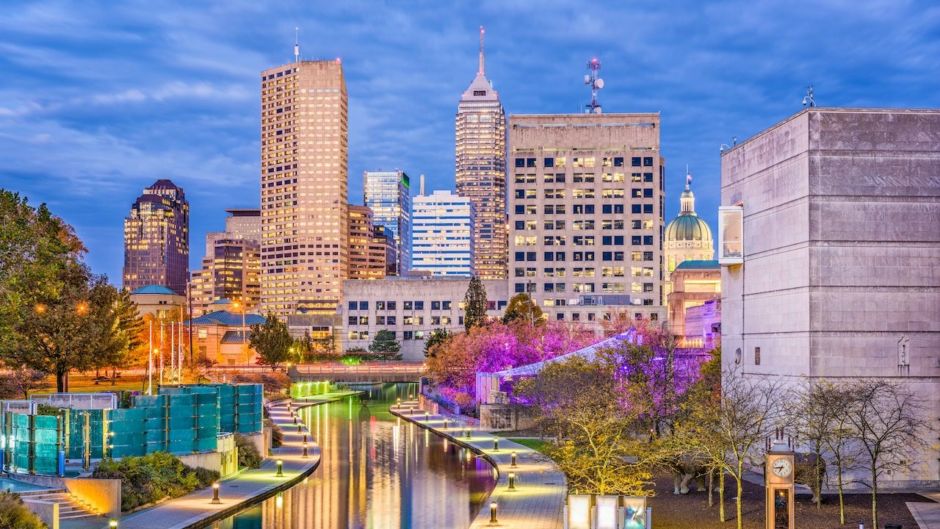 In the early 1800s, prior to the development of the railroads, the US was crazy about canals. Indiana had a plan to build one, connecting the Erie Canal to the Ohio River. That never happened, with only eight miles—of the proposed 296—ever completed.

But they’ve sure made the most of those eight! One portion of the waterway, now known as the Canal Walk, runs through Downtown and past sites like White River State Park and the Indiana State Museum. A bit farther north, there’s a separate section near the Indianapolis Museum of Art at Newfields where you can rent pedal boats to get on the water.

Greyhound station: 350 Illinois St, about a mile from the southern terminus of the Canal Walk 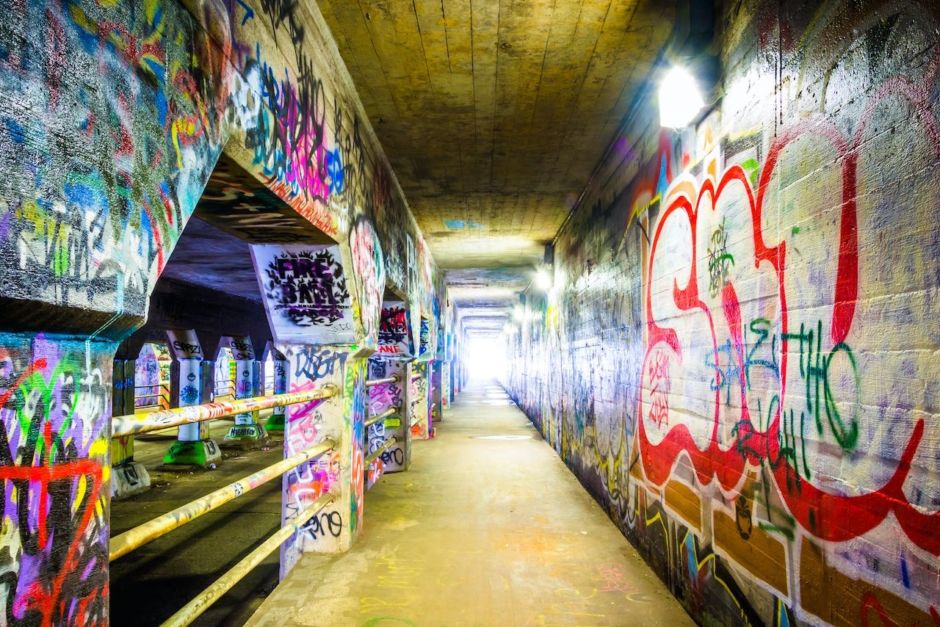 “It’s just an underground passage with two lanes for traffic and pedestrian walkways and is also covered with graffiti. And?” reads one of Krog Street Tunnel’s Google reviews. But those in Atlanta—and most of the rest of the us—understand the site’s true beauty: It’s an ever-changing, always-open, free art exhibit for everyone.

In addition to shuttling traffic between Atlanta neighborhoods, the tunnel serves as Instagram backdrop, city calendar (if you’re looking for local events, ditch the web and come here), and community art palette. Why doesn’t every city have one?

Greyhound station: 232 Forsyth St SW, a little over two miles from the tunnel

This post is proudly produced in partnership with Greyhound.
Tagged
Galleries United States
What did you think of this story?
Meh
Good
Awesome

May 17, 2022 Matthew Dursum
✖
travelstoke
Download the mobile app
stoked by