MONTREAL IS THE WILD CHILD of Canadian cities. It’s also among the older cities in Canada, just recently celebrating its 375th birthday. This combination is attractive: a lively, artistic, rebellious city with a penchant for the arts and culture, set against European architecture and attitude. Montreal likes to party, but with culture. It’s unlike anywhere else in North America. I had the good fortune of heading up there for some of their 375th events, and got to explore the sites, food, culture, music, and atmosphere of the city while I did so. Check out this series of images showcasing Montreal as the festival and arts capital of Canada. 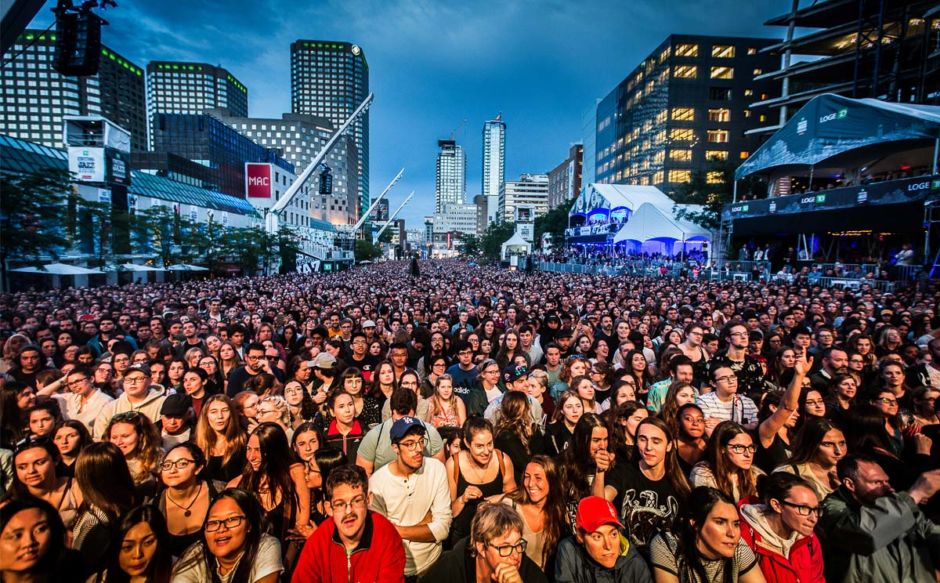 Looking at a calendar of Montreal events, the arts scene looks non-stop. Many Montrealers told me a big challenge is deciding what festival or live music event to skip in favor of another. It sounded like a pretty good problem to have. 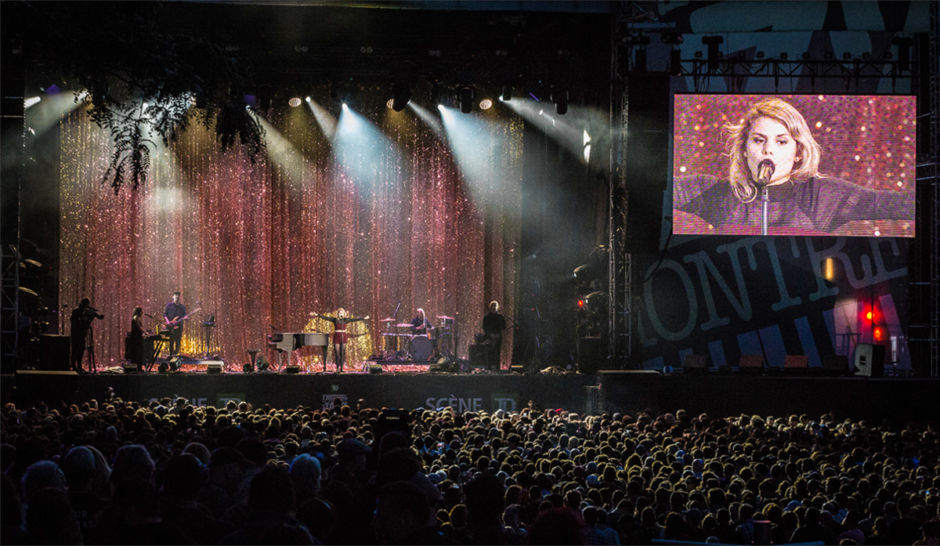 Montreal’s 375th anniversary took place this year and the celebrations were not overlooked. Occurring four times over the summer, Sessions 375was a free, all-ages concert event featuring some of Quebec’s most popular artists. Here Montreal singer-songwriter, Couer de Pirate performs in front of a crowd of over 50,000 cheering fans. 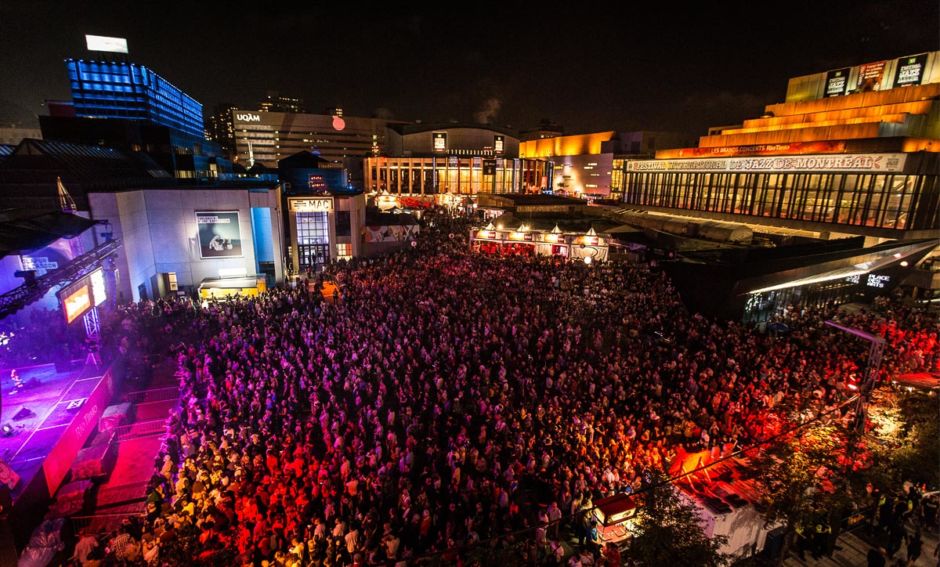 As host to the world’s largest international jazz festival, Montreal is no stranger to putting on a massive party. The Jazz fest brings in musical acts from around the world with its free outdoor stages, occupying massive plazas throughout the city. Performances were all times of day and night - and did I mention free?

More like this: The ultimate 7-day nightlife guide to Montreal 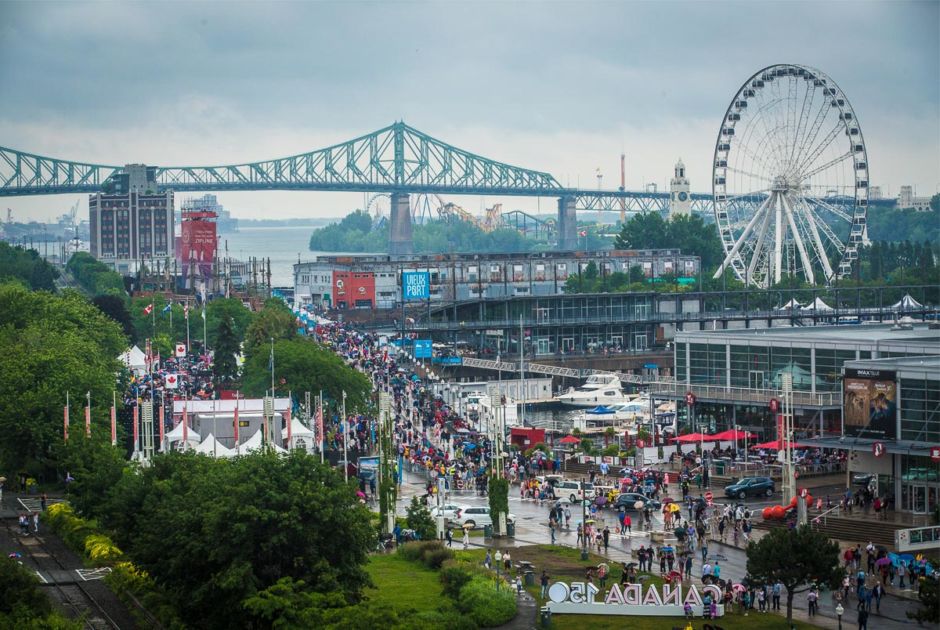 When not at festivals all day and night, I wanted to explore the city itself. Montreal’s Vieux Port, once the industrial hub, is home to events year-round and is a great place to start. It’s backed by the city’s iconic Jacques Cartier bridge, and follows the St Lawrence River. From staging Cirque du Soleil to transforming into the epicenter of Canada Day celebrations, it is a popular and lively part of the city, especially during the day. 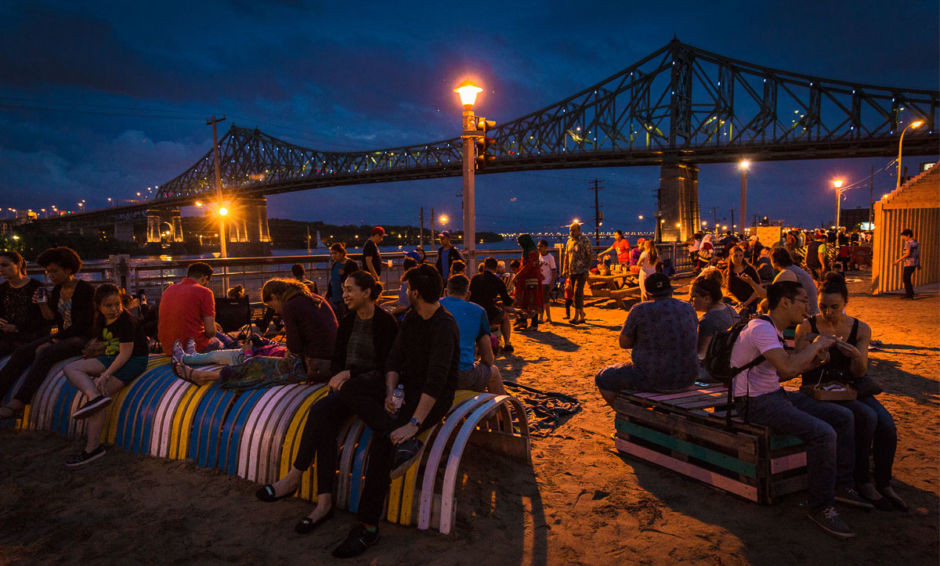 By night, you can head to the edge of the river and practically underneath the Jacque Cartier Bridge and you’ll find Village au Pied-du-Courant. I found a sandy oasis with food trucks, hammocks, and live music. It seemed to have plenty of locals, alongside visitors like myself. 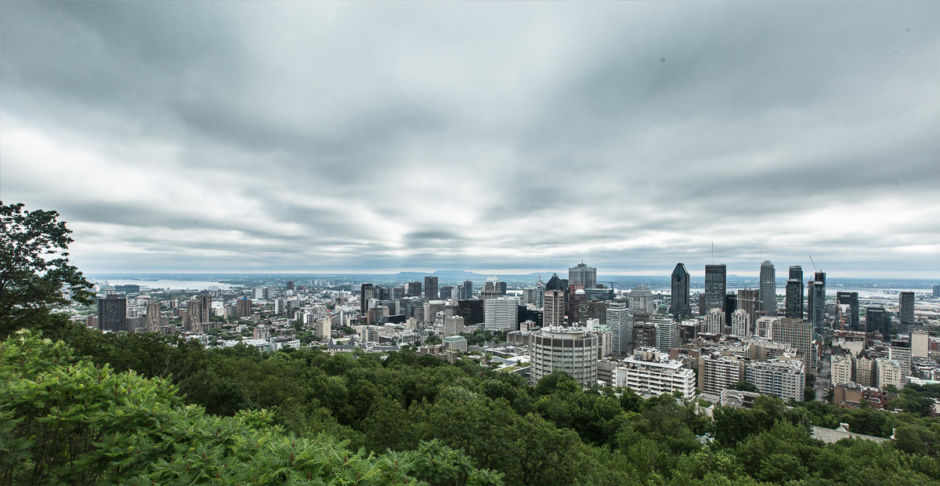 A hike up to Mont Royal will give an impressive view over the whole city. Just don’t forget your water to beat that Quebec summer heat. 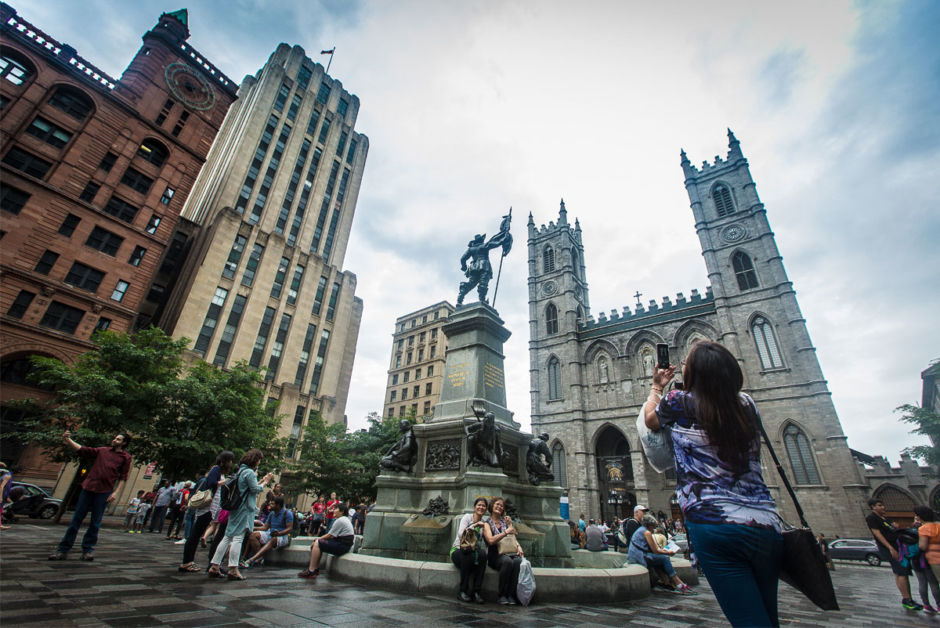 Montreal is known for its brilliant diversity in architectural styles; and a great example is Le Place d’Armes where a 19th century basilica, the Notre Dame, stands beside an 86-yr old art deco-styled Aldred Building. Both are across from a more modern-designed, 500 Place D’Armes. This kind of diversity is easy to spot all over the city. 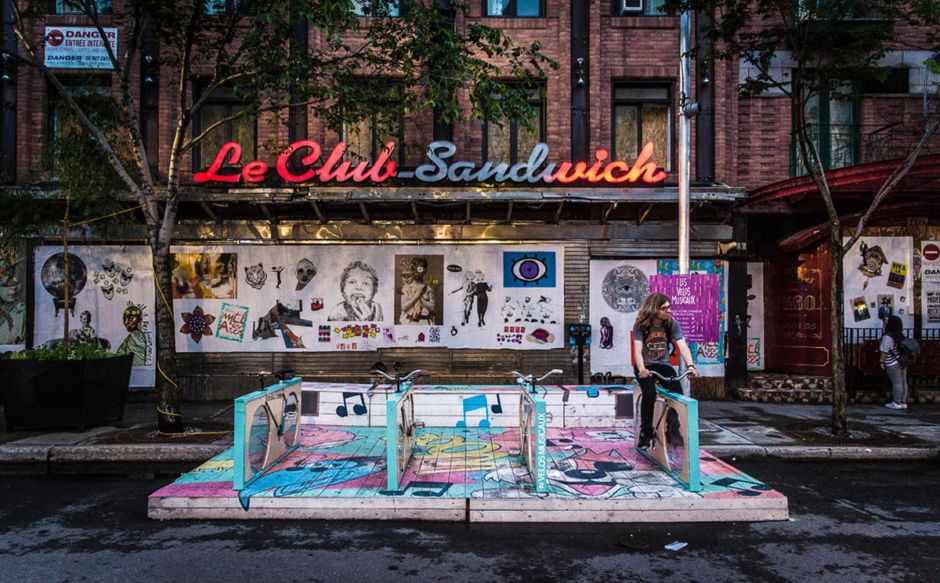 Unlike some cities, Montreal is a place where art is celebrated and inclusive. Free to the public, exhibits such as this music-projecting stationary bike pop up all over the city. 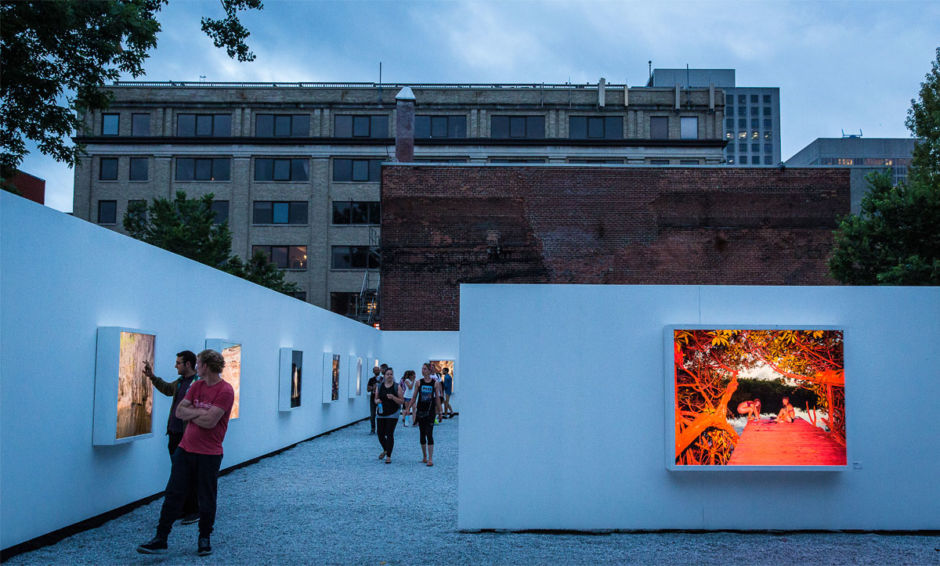 Galerie Blanc, an ‘open-sky gallery concept’ is an outdoor exhibition right in the middle of Le Village offering art to the public, rain or shine. 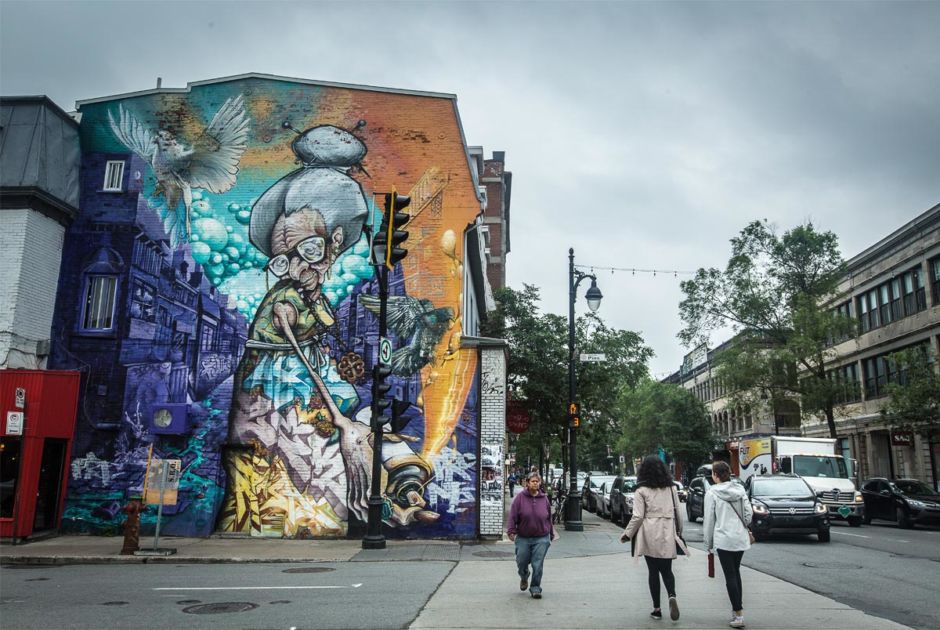 Montreal’s street art scene is flourishing these days. Many of the city’s best murals can be found by walking along Boulevard Saint-Laurent. Each year in June, Montreal hosts a public street art festival whose mission is to 'celebrate creativity and the democratization of urban art.' 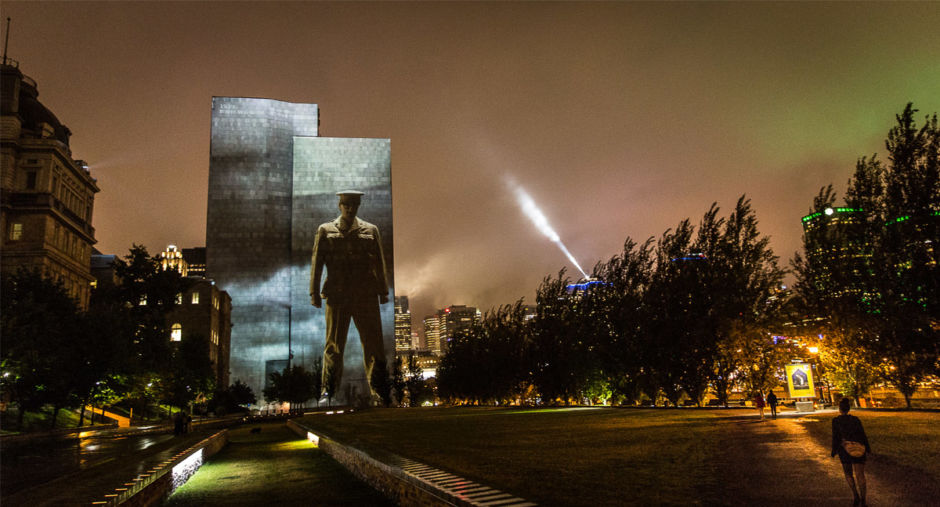 Alongside street art, projected installation art is a pretty big thing in Montreal. Cité Memoire is a year-round art installation which features 80 projectors creating images and videos about the city’s storied history on the sides of buildings across the city. Here is one of the largest projections, found on the side of the Palais de Justice. 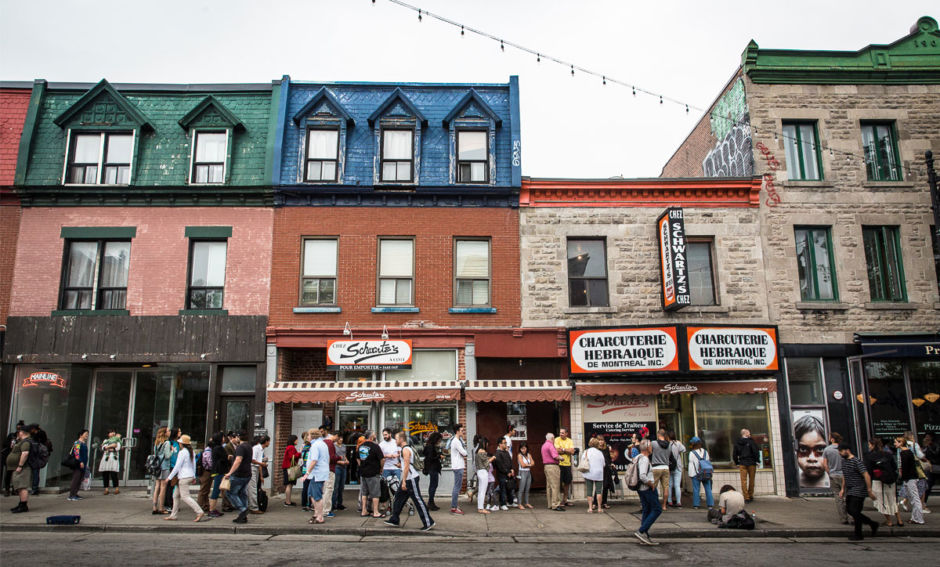 No trip to Montreal is complete without trying the city’s famous smoked meat offerings. Probably the most well-known and one of the oldest establishments is Schwartz’s Deli. With lineups every day, you’ll meet both locals and tourists from around the world, all looking to try the deli’s famous dish: a smoked-meat sandwich served with fries and a gherkin pickle. And if you want to really do things properly, make sure you wash it down with a Black Cherry soda. 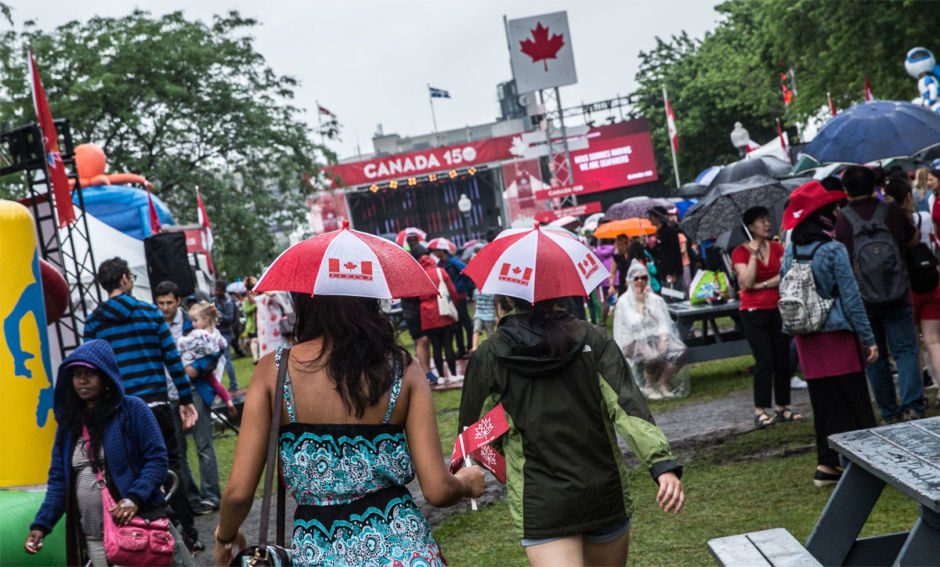 While Montreal is clearly in a class of its own, and while the francophone province of Quebec has had its quarrels with the rest of the largely anglophone country, Canada Day was celebrated all across the city. While Montreal is 375 years old, Canada is a mere 150 years old as a country. This milestone was met with - surprise! - free events, concerts, art, and festivals. It seems to be the Montreal way.

Note: Kyle was a guest of Tourism Montreal.

What did you think of this article?
Meh
Good
Awesome
Bookmark
Posted In
Events + Festivals
Destinations
Montréal, Canada

10 reasons you need to head to Montreal in the wintertime

Why Montreal might just be Canada’s most underrated city

9 things people from Montreal have to explain when traveling

15 superpowers you gain growing up in Montreal

11 must-have experiences to have in Montreal

A perfect one-day walking tour of Montreal in winter

The 6 most exciting Chinese New Year celebrations around the world