WHEN the Canadian Rockies are discussed, talk of Banff, Jasper, and Lake Louise in Alberta dominates the conversation. But the Rockies stretch over the provincial boundary into British Columbia, where there is a lot more exceptional wilderness to explore. I recently made a road trip with my partner from Nelson, BC into Yoho National Park (about a 6-hour drive), then into Golden, which is a small gateway town to the Rocky Mountains. We found top notch accommodations, food and drink, and endless outdoor adventure. 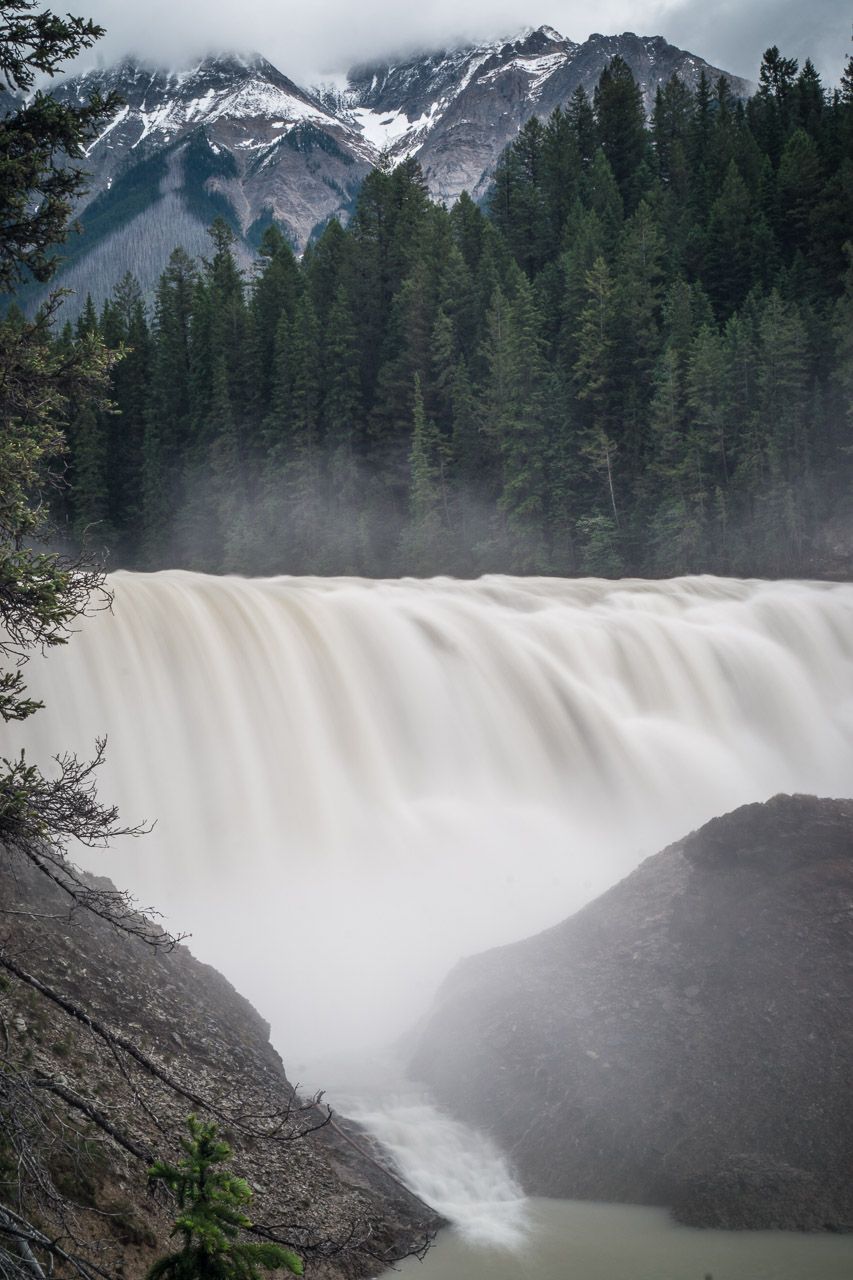 Don't make the mistake we did and get Google directions to "Wapta Falls" -- it led us down a long pot-hole-filled logging road to Wapta Falls Recreational Site (e.g, a wild campground) just outside the national park boundaries. Instead, find the signpost to turn off Highway 1 between Field and Golden. From the turn off, it's a short drive down a gravel road to the trailhead. 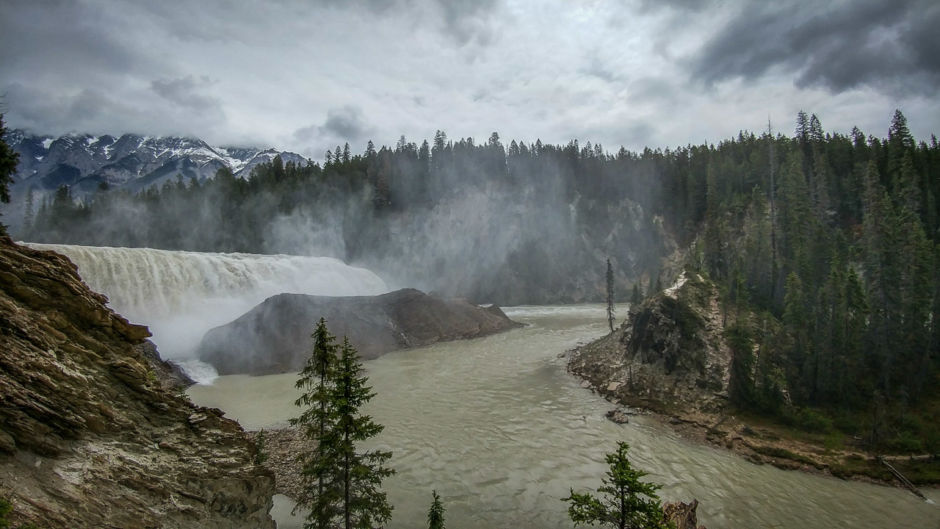 The hike is under 5-km roundtrip and mostly level, so it's very family-friendly. If you want to hike down to the river you'll have some elevation change but if you just want some views of the falls you can easily turn back without having to hike down, then up. Takakkaw Falls -- Canada's second highest free-falling waterfall -- is nearby as well, but the road to it was still closed in early June when we were there. 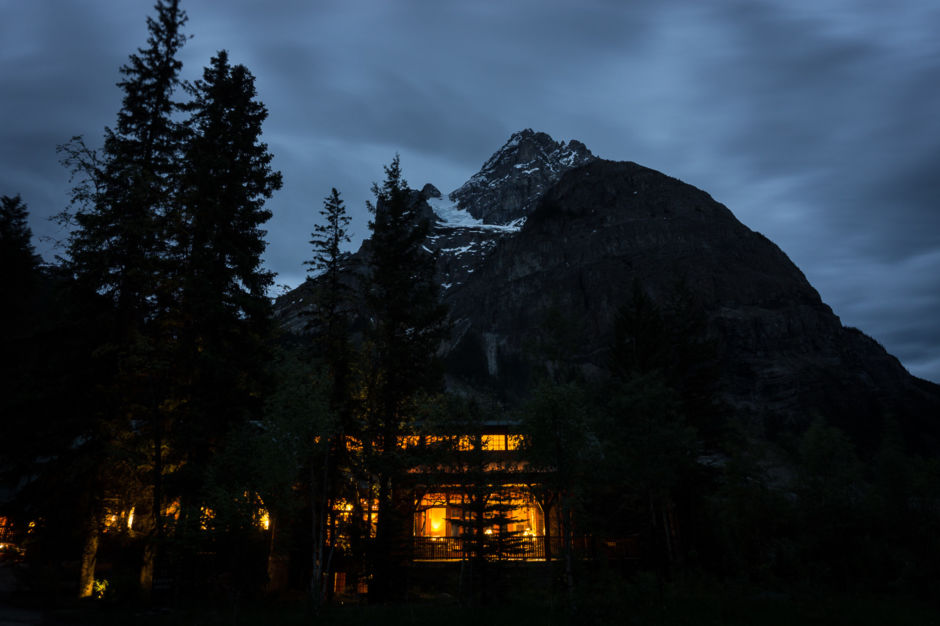 Cathedral Mountain Lodge is luxury in the middle of the wilderness, surrounded by mountain peaks, and sitting on the banks of the Kicking Horse River. Often at night guests are welcome to congregate on a small beach along the river where there's a fire pit and chairs -- to munch on s'mores and chat. A very tasty and fresh buffet breakfast is included with every stay. Save room for a couple of pastries. There's also complimentary daily tea and cookies from 3-5 in the afternoon. 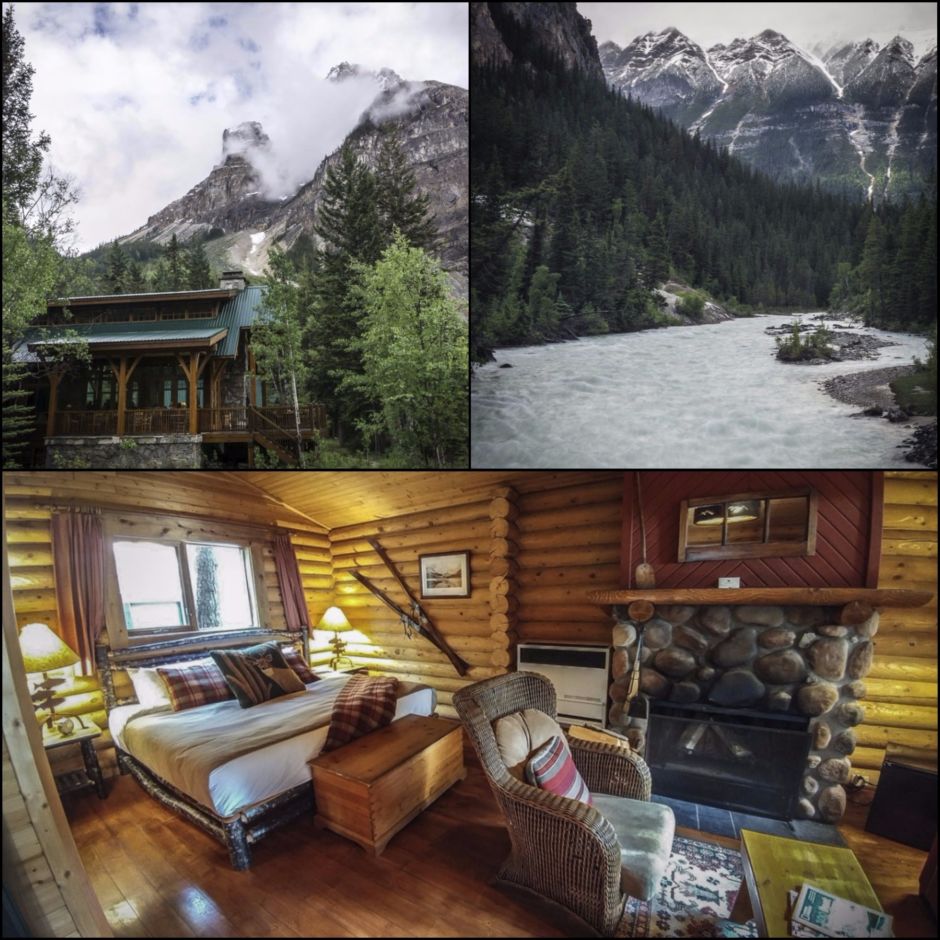 You won't find any televisions or phones to distract you at Cathedral Mountain Lodge. I found the Wi-Fi to be slow and the cell phone reception spotty, so don't expect to spend lots of time surfing the net or working. That's not why you're in Yoho National Park anyway. Go for walks, take a look around, breathe in the crisp mountain air. Enjoy the amazing food they serve in the kitchen. There are a few different cabin types to choose from. Shown here is the premier cabin which comes with a wood burning fireplace and a king bed. 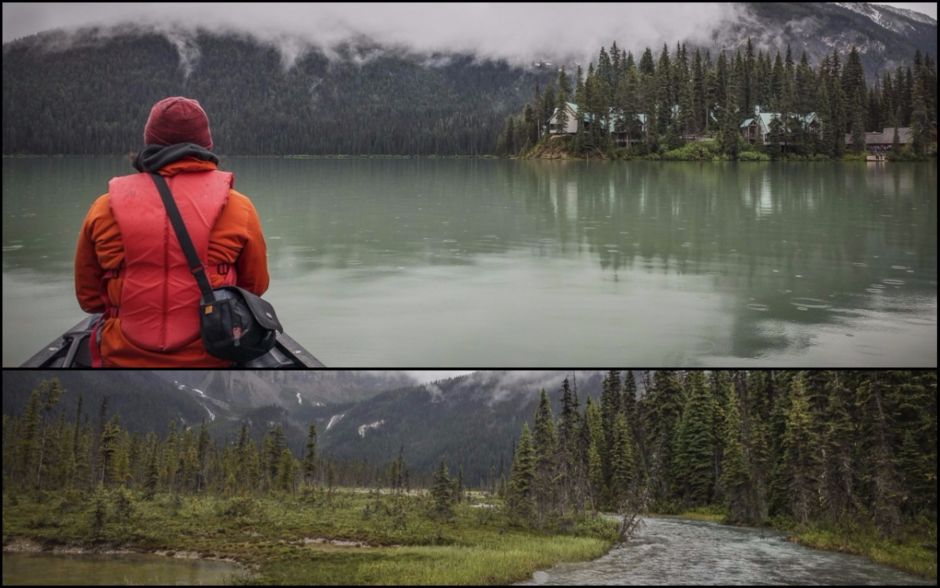 In sunlight, Emerald Lake looks just like its name describes. Unfortunately for us the weather wasn't co-operating. But it didn't stop us from making a loop trek of the lake -- which included walking across a stretch of snow still there in June and crossing small wooden bridges on the far side to get over the inflow creeks. It also didn't stop us from renting a canoe and getting onto the water. We were the first to do it, but soon after saw a few other people paddling about the still waters. 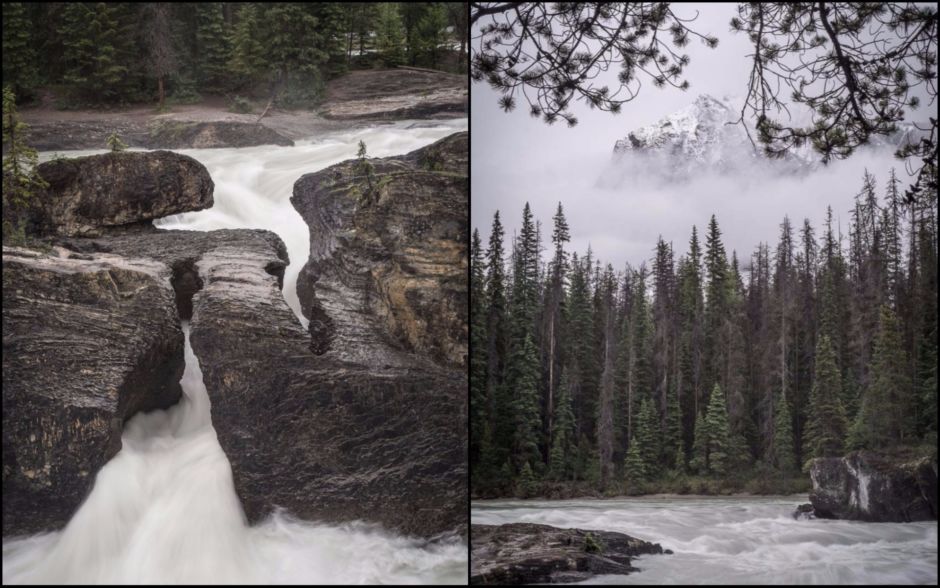 Natural Bridge is an easily accessible stretch of the Kicking Horse River that has a natural bridge. The rock bridge used to be a waterfall, but the lower (and softer) layers of rock eventually eroded away, leaving a natural bridge for the rushing river to flow under. It's immediately off Highway 1 in a pullout, no hiking necessary. 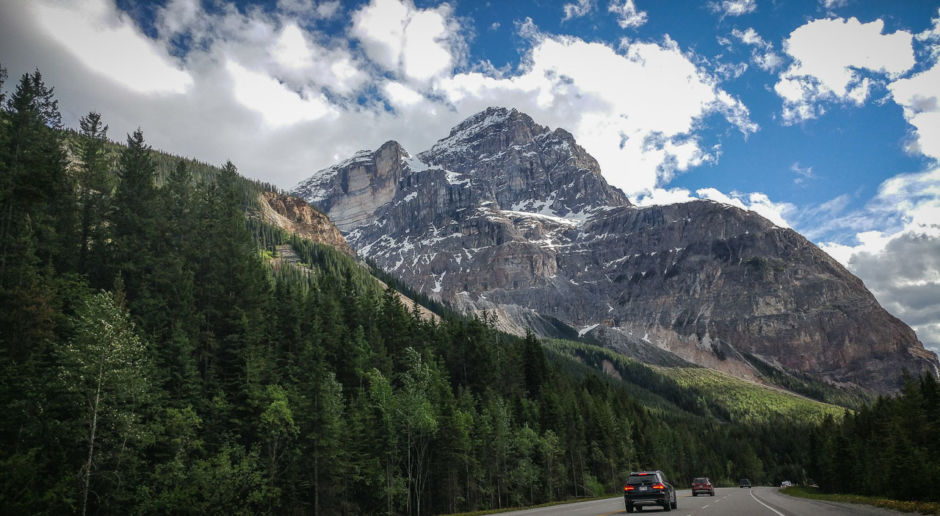 Your typical scene while driving in the BC Rockies. I recommend being a passenger. 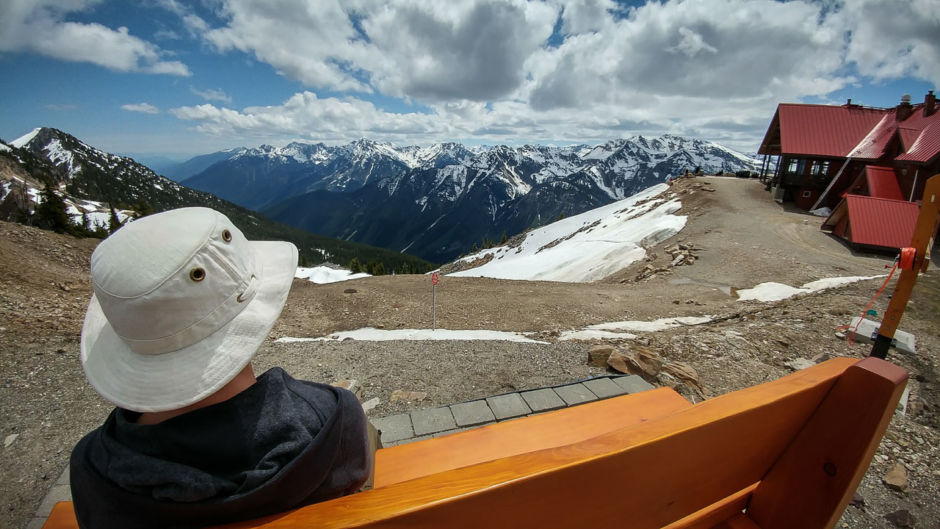 Just outside Yoho National Park is Golden, BC, a town of about 3700 full time residents and the perfect spot to spend a couple nights whether you're headed east into the Rockies or west to explore more of British Columbia. After two nights in Yoho, we skipped over to Golden to spend two more nights. We spent some time up at Kicking Horse Mountain. In the summer, they have mountain biking and hiking, and in the winter, it's champagne powder for skiers and boarders with access to backcountry alpine terrain for those with the right gear, knowledge, and conditioning. The lodge, seen above to the right, is popular for weddings and the restaurant is fantastic. 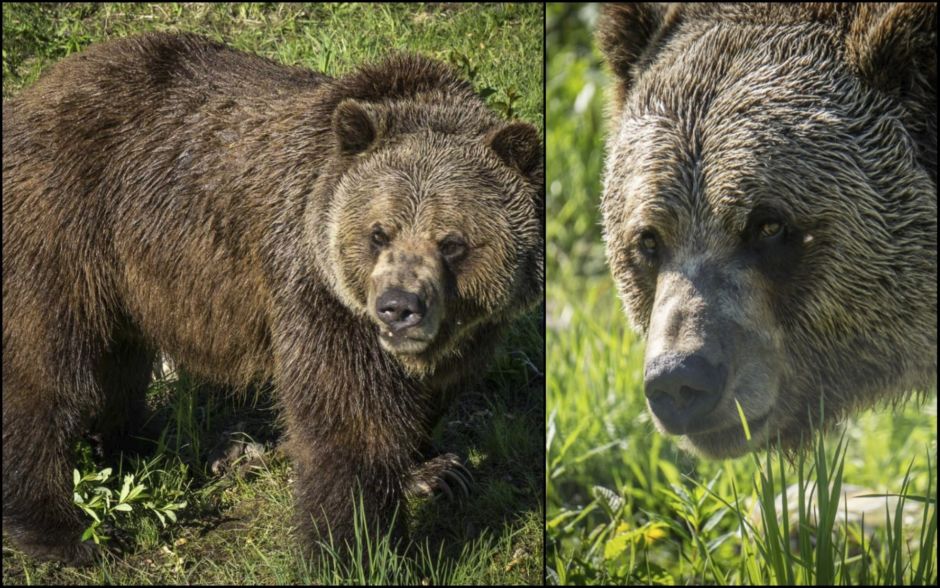 This is Boo, a 15-year-old male grizzly bear that was found orphaned after his mother was shot by a poacher. He was found with a sibling at 5 months old and both were rescued and cared for at the Kicking Horse Grizzly Bear Refuge. The sibling, Cari, didn't survive after the first winter (vets discovered a twist in his intestines), but Boo has flourished in the mountain refuge. A lot has been learned by observing Boo over the years and the knowledge gained has led to other grizzly bears being rescued and eventually released into the wild. For example, it was always thought that a cub needed its mother to learn specific survival skills, like den building, but they found that Boo was demonstrating these abilities naturally on his own.

As you might expect, there are strong polarized feelings about having a bear in captivity among the locals -- there have been (and continue to be) attempts to "free" Boo. But the reality is that if he were released into the wild he would likely have to be eventually euthanized because he is socialized to humans. At 20 acres, the refuge is the largest enclosed, protected bear habitat in the world. 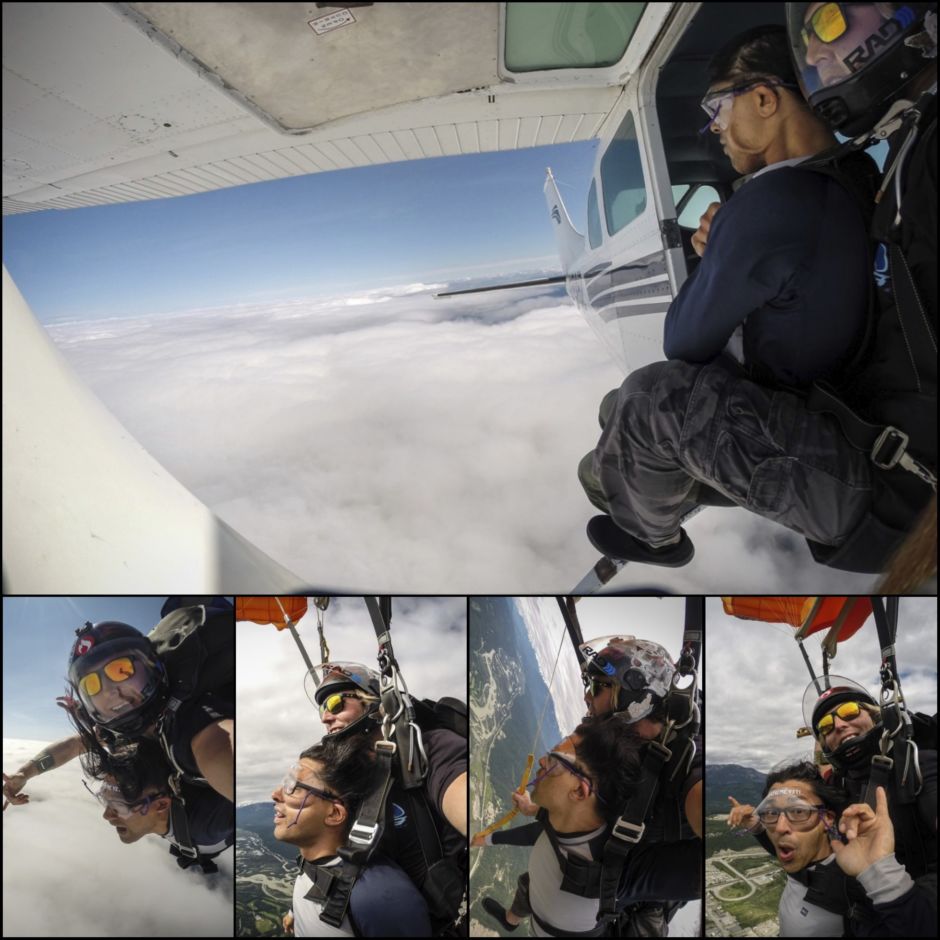 10,000 feet in the air cruising at 80 km/h. It's very unnatural to step out of an open door of an airplane to look down on clouds, but that's exactly what we did with Extreme Yeti Skydiving in Golden. You can see the force of the wind on my cheek as we prepare to launch ourselves out into the open. Skydiving was never something I needed to tick off in my life, but when the opportunity came up, I jumped (pun intended) on it. And I'm so glad I did; it's one of the best experiences I've ever had. Words can't describe it, it's absolutely magical to fall through a cloud like that. At the time, it was like being in a dream, then when the chute gets pulled and things slowed down a bit, I could start to appreciate what's happening. 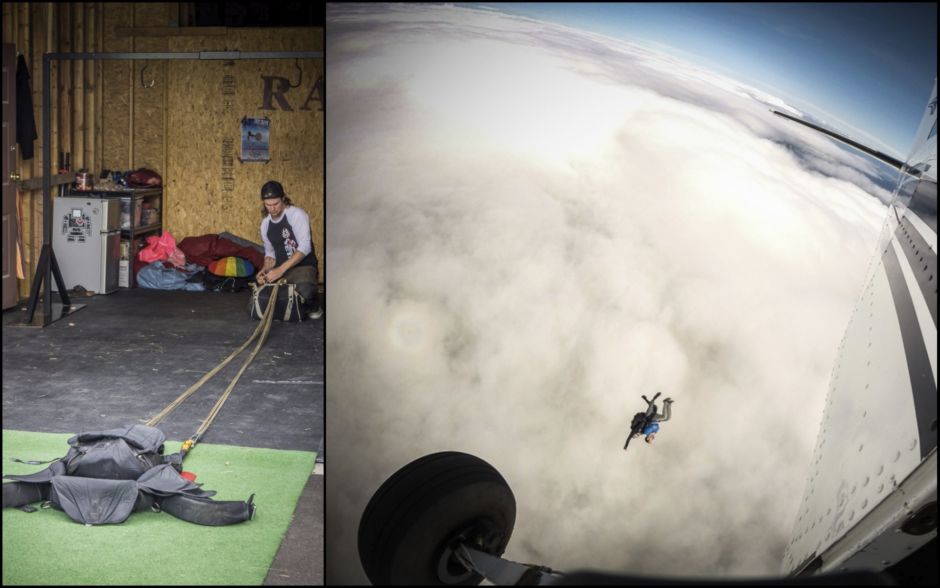 I'd never considered how the parachute gets put into the little packs. But there are people who are experts at this. It's a specific skill that's needed to ensure that the chute opens properly when pulled. I, for one, am very grateful for this guy. To the right is another skydiver on my flight being hurled out. 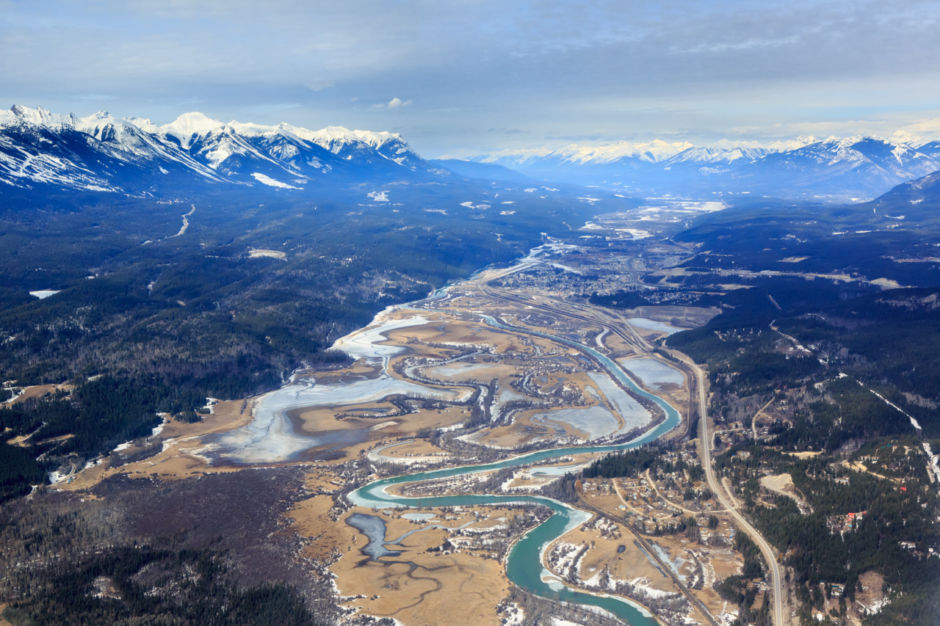 Golden sits in the Columbia Valley in the southern reaches of the Rocky Mountain Trench, between the Purcell mountains and the Rockies and near the confluence of the Kicking Horse and Columbia rivers. From this vantage point in the plane, you can see five Canadian national parks: Yoho, Glacier, Kootenay, Banff, and Jasper. [Photo courtesy of Tourism Golden] 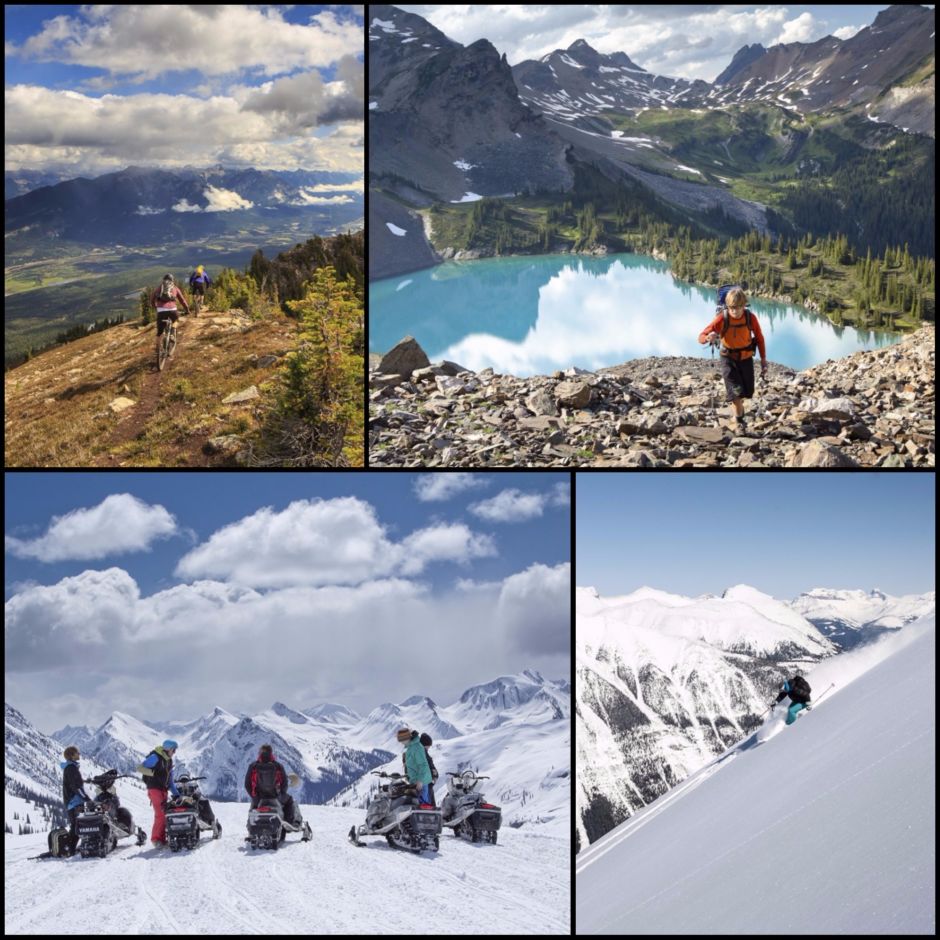 If you're into the outdoors, Golden is the epicenter of some unbelievable terrain. [Photos courtesy of Tourism Golden] 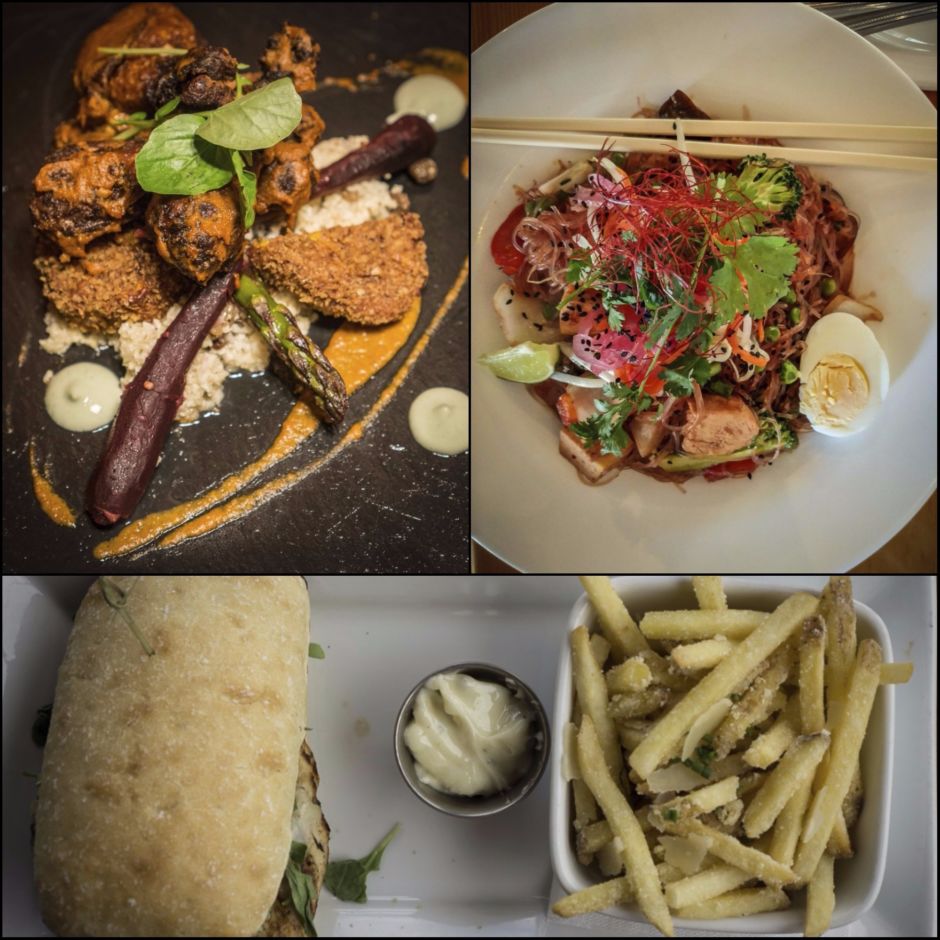 For a town as small as Golden, it's a real surprise and treat to have as many great restaurants and cafes as they do. A few of my faves included Whitetooth Mountain Bistro (top left), Eleven 22 (top right, and a locals' choice), and the Eagle's Eye Restaurant up at Kicking Horse Mountain (make sure to upgrade to the truffle fries!). 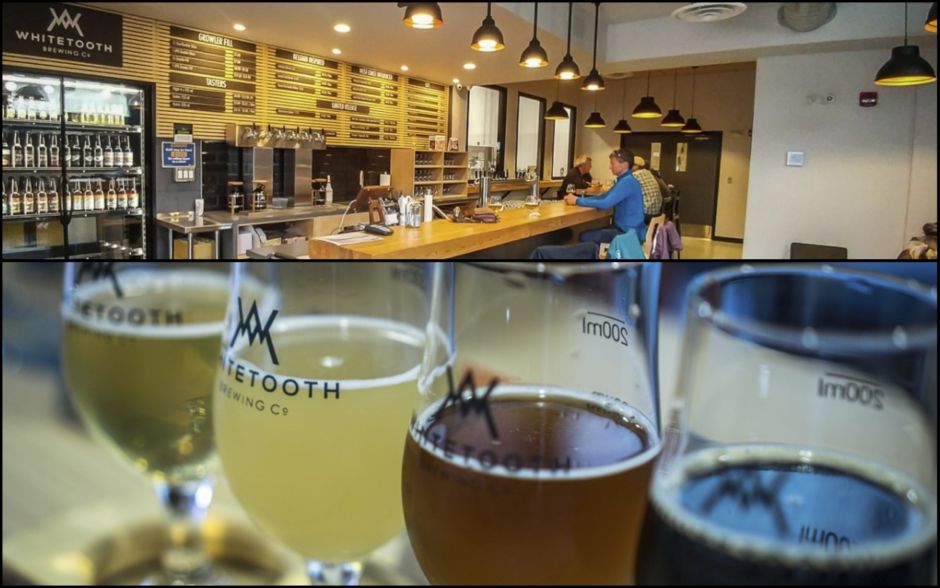 Whitetooth Brewing is the first and only craft brewery in Golden. The tasting room, where you can order bottles, fill a growler, or sample a flight of tasters, is open from 2-10pm every day except Tuesday. 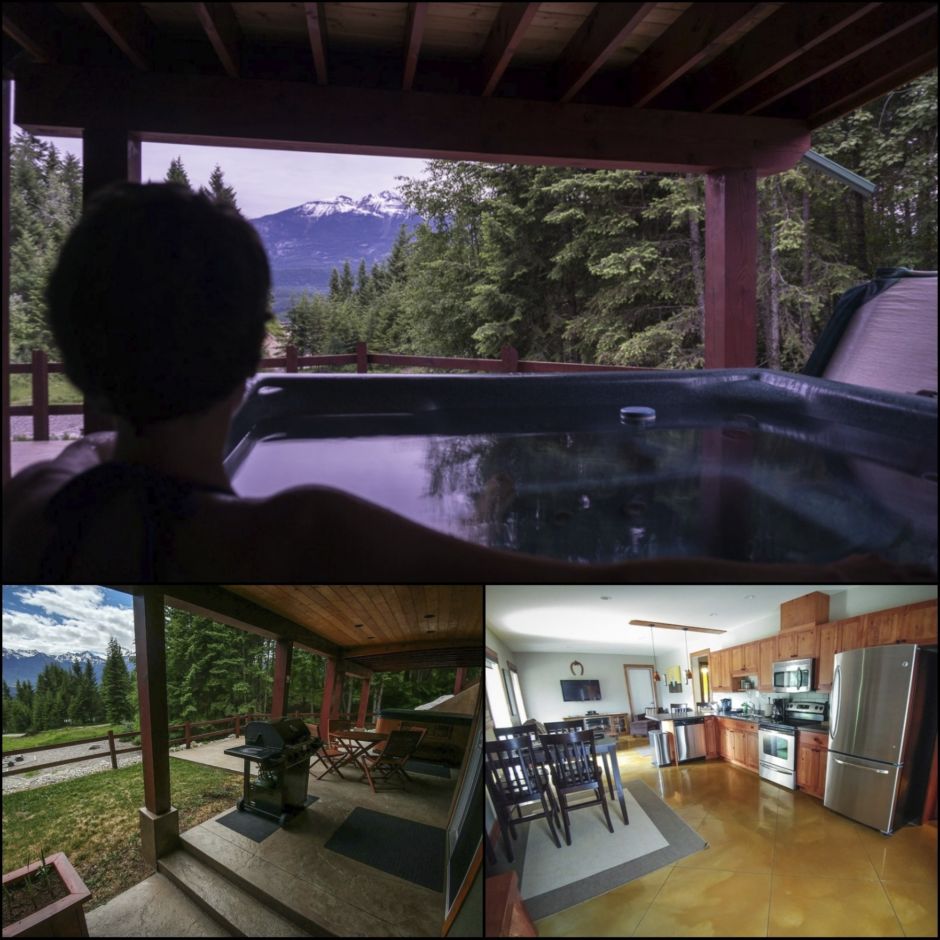 While in Golden we stayed at the Cedar House Chalets, a stunning and modern property just a few minutes drive outside of town. There are several chalets to choose from, each with a full kitchen, private hot tub, fireplace, and barbecue grill. We stayed in the Sun Suite, a 2-bedroom immaculate suite that also had a solarium in which we could bask in the sun's glow (and do hot yoga if you like.). The view from the hot tub was phenomenal. 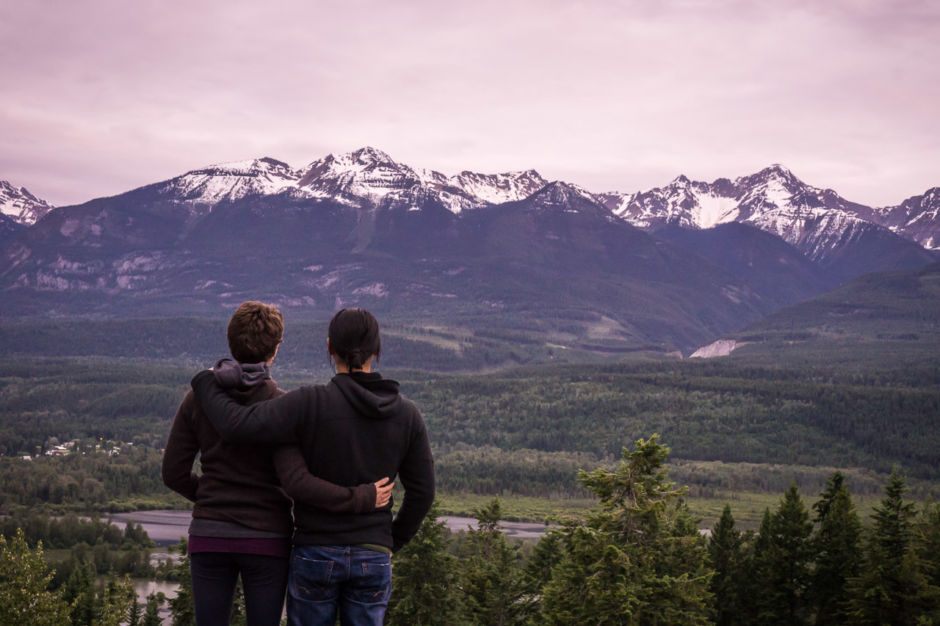 On their property is a large viewing deck, on which many weddings get booked. It's not a surprise why that is -- there's a magnificent view over the valley and up to the mountain peaks. 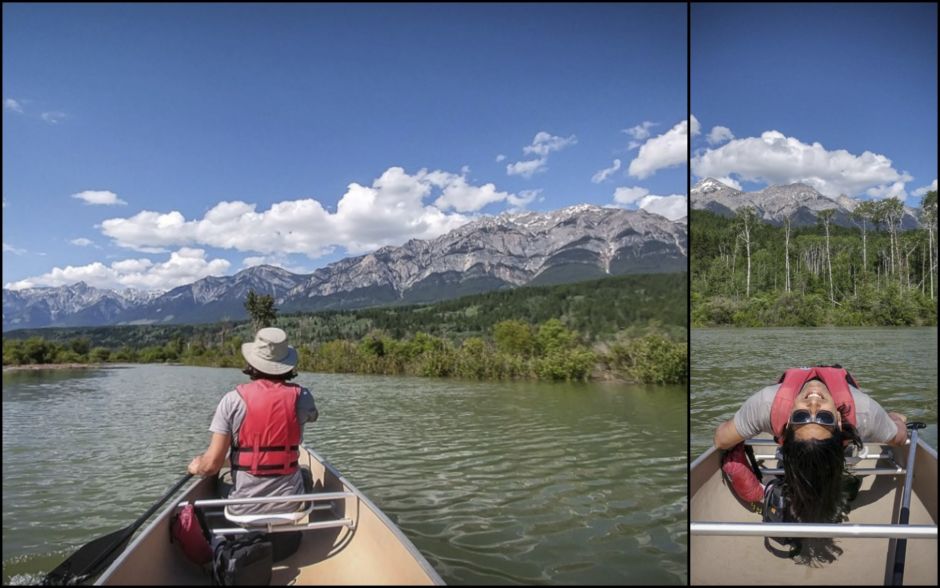 The Columbia wetlands is the largest of its kind in BC, protected by the BC Wildlife Act. It's the habitat of over 200 animal species and the source of the largest river flowing into the Pacific Ocean, the Columbia River. The famous Canadian landscape artist, Robert Bateman, said, "One of the most precious things on a world scale...is the Columbia River wetlands." 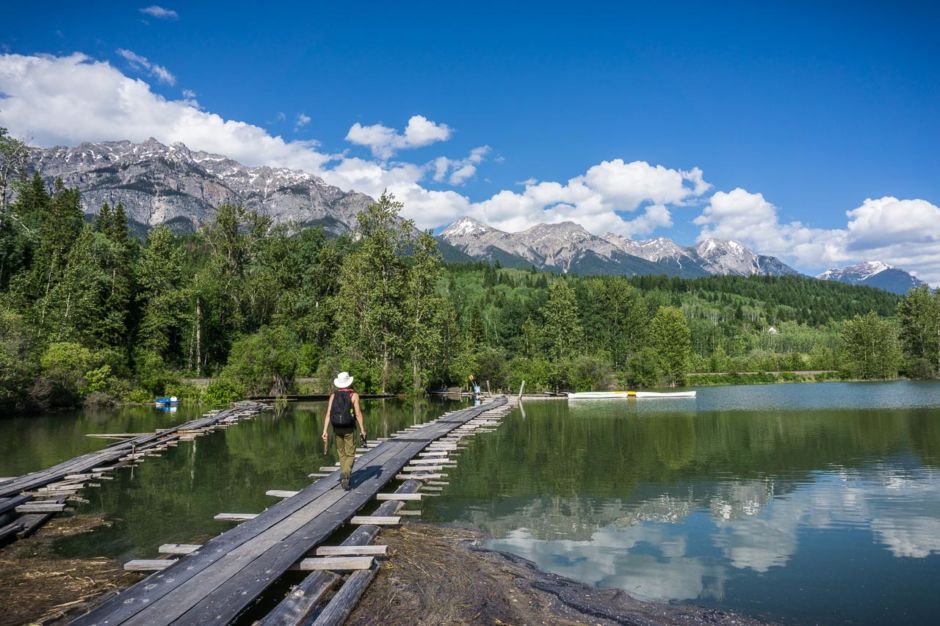 The Columbia Wetlands Outpost is a family-run business that is passionate about preserving this special landscape and inviting visitors to experience it in an eco-friendly and environmentally-sustainable way. You can rent canoes, standup paddle boards, and kayaks to explore the wetlands from them and head out on self-guided tours (they can advise on a number of optional routes through the river system). The family has built a floating path in a portion of the wetlands that you can explore on foot, as well as being the way to get to where the boats are docked. When we were there we saw a lot of birds and a water snake slithering across the surface; during our visit, the water levels were at their highest in a long time, flooding over banks that would normally serve as river channel boundaries. 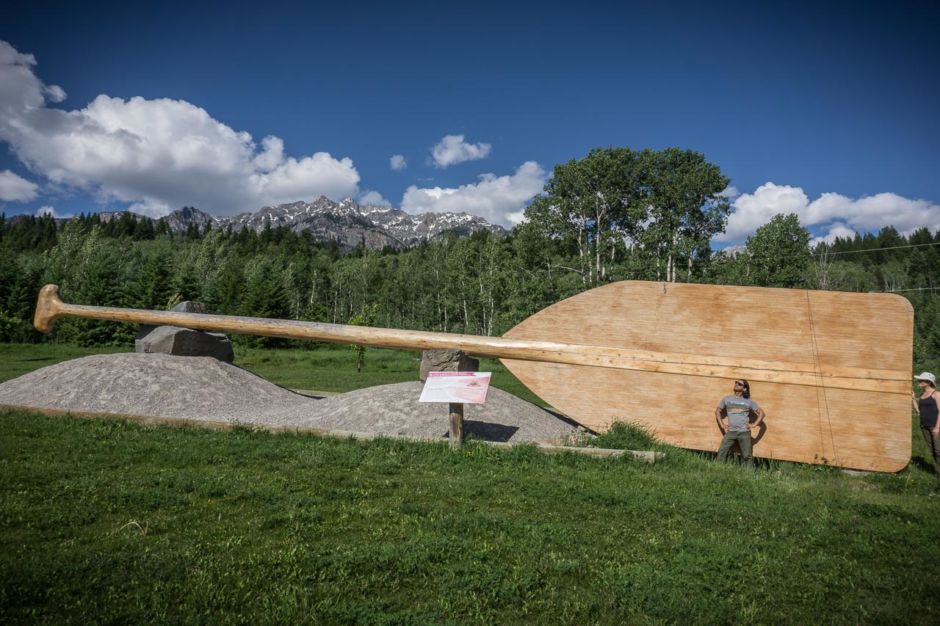 The largest paddle in the world

This giant canoe paddle is on the drive up to the Columbia Wetlands Outpost office. You can't miss it. Some material stats: It's made from one Red Western Cedar log over 60 feet long, one 4' x 40' slab of laminated veneer lumber, a total of 5300 lbs. of material, 200 hours of labor, and 4 gallons of Varathane.

[Carlo and his partner were hosted by Kootenay Rockies Tourism and Tourism Golden, with support from Cathedral Mountain Lodge.]

Tagged
British Columbia, Canada
What did you think of this story?
Meh
Good
Awesome