Conrad Anker first picked up an ice axe in 1982. He’s been climbing on ice ever since. “When I’m at home in Montana,” Anker says, “I absolutely live for ice climbing.” With the world-class Hyalite Canyon just a few minutes outside his hometown of Bozeman, Anker spends a lot of time every winter doing just that. He’s established dozens of routes in the canyon and uses the frozen waterfalls and overhanging rock walls of Hyalite as his exercise gym, gear lab, and training ground before heading to the Himalayas every spring.

Describing Anker as an expert ice climber would be a wild understatement. He’s one of the best, most technically sound and expedition-proven high-altitude ice and rock climbers in the world. Which is why I was thrilled, and a bit nervous, about joining him for a day of ice climbing on his home turf. The only catch was, I’d never been ice climbing before.

“Well, there’s a first time for everything,” Conrad replied in an email. “It might as well be on Tuesday!” Gulp. Followed by, “It will be fun, or complete misery, depending upon how you define fun…my guess is this will be worth two roller coaster rides. ;)” Double gulp. I’m not going to lie, that winky-face terrified me.

Here’s how the day went. 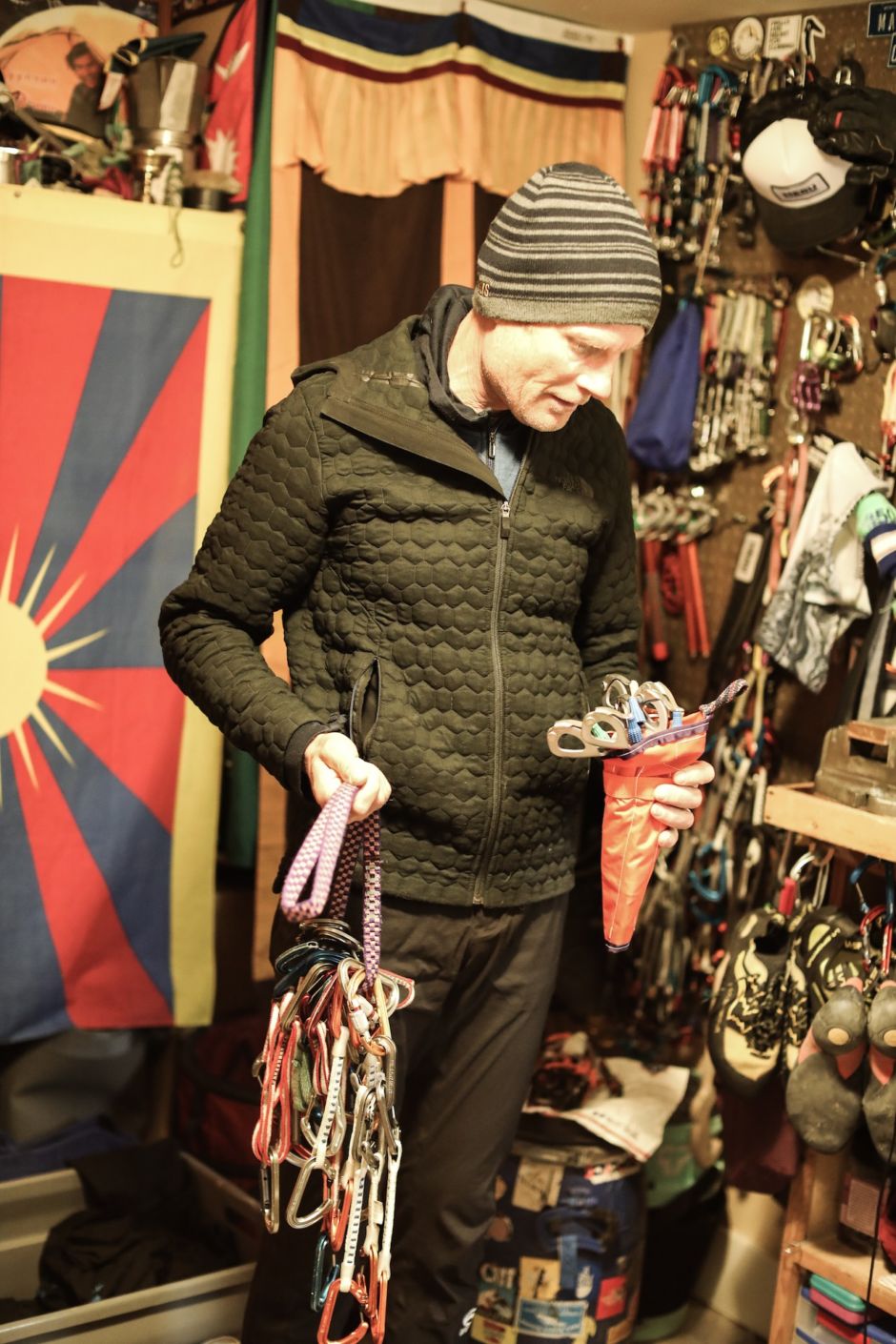 Conrad in his gear room prepping for the day’s climbing adventure. His gear room is his inner sanctum; it contains everything he’d need for an expedition to Antarctica, climbing Everest, or a day of ice climbing with a complete rookie in Hyalite Canyon. All the gear is meticulously organized, with Conrad’s favorite cartoons, news clippings, invitations, poems, art, and personal remembrances covering the walls. 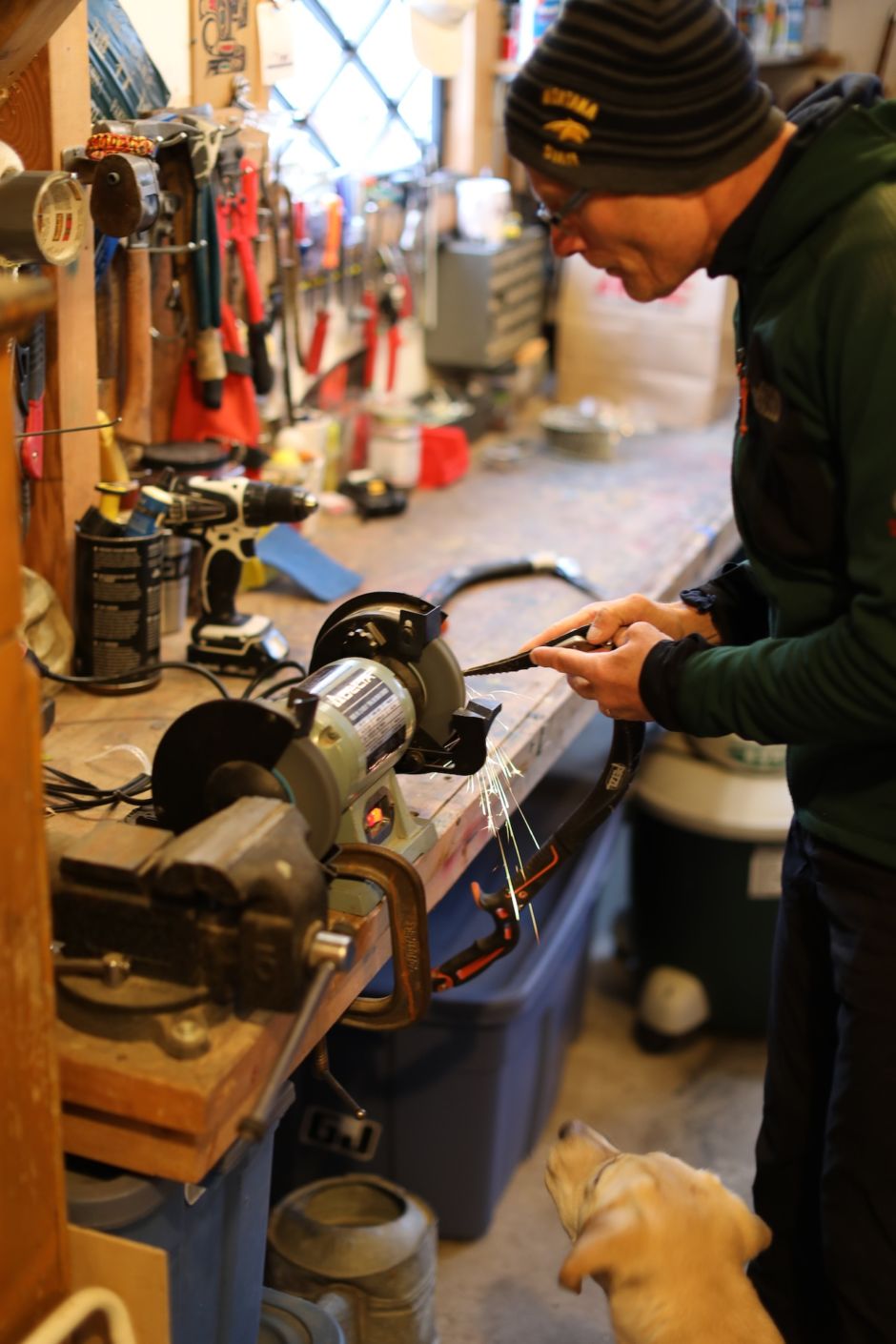 Sharpening his ice axes before we head out. For mountaineers and climbers like Anker, gear is more than just tools; he has to be able to trust them with his life. 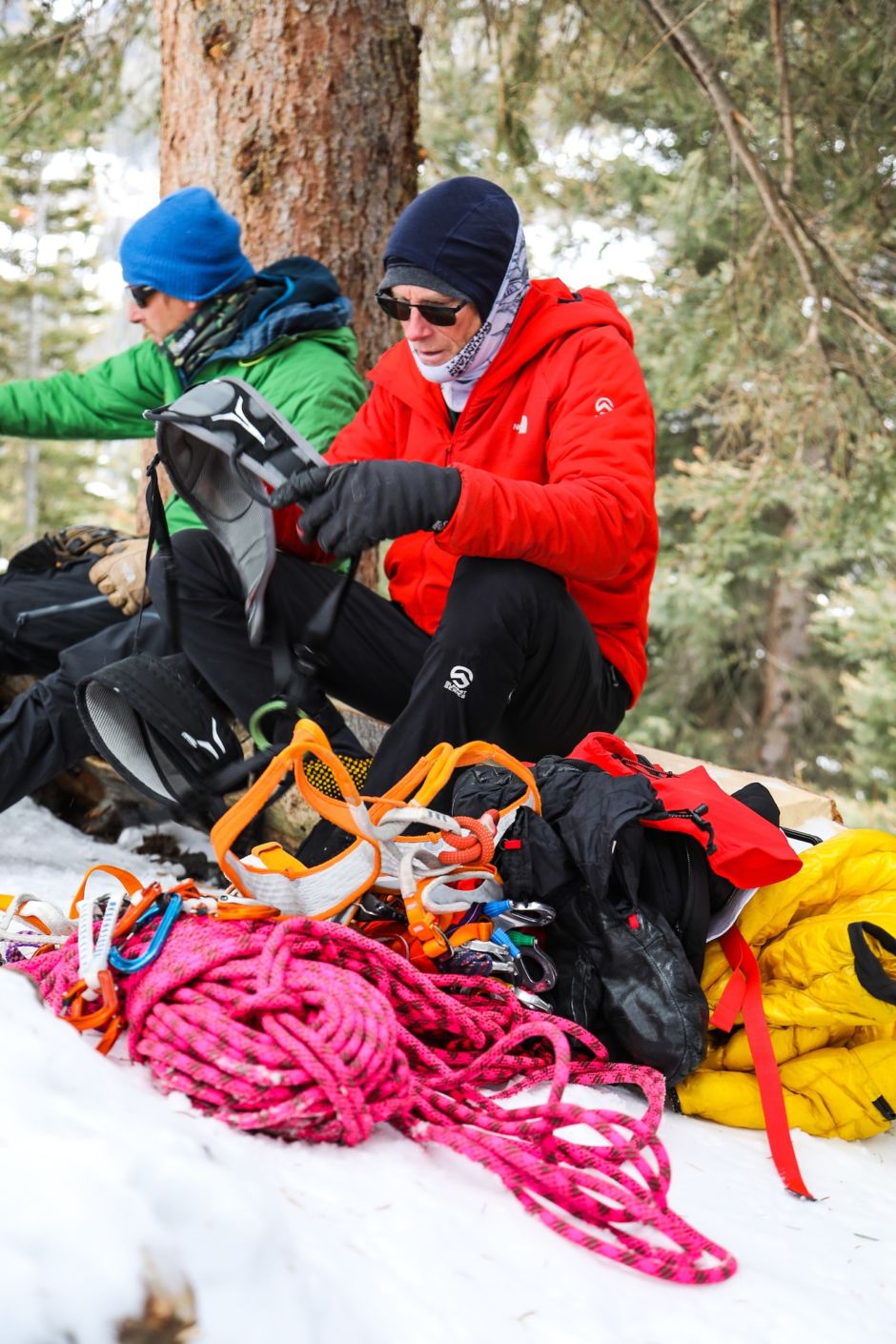 After a beautiful 20-minute drive from Conrad’s house in downtown Bozeman up Hyalite Canyon, we parked the car, loaded up the gear, shouldered our packs, and hiked a winding path through the snow-covered woods for another 15 minutes to the base of a 60-foot frozen waterfall. Here we are at the bottom of the first climb getting the ropes and other gear organized. 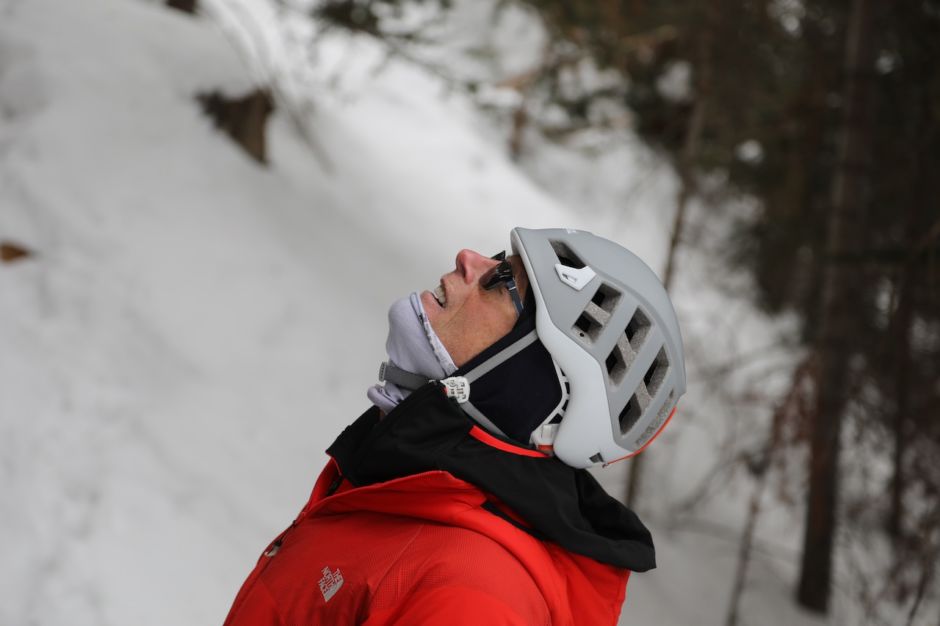 Conrad gazing up the ice while assessing the route. “The more vertical the climb, the better,” he explains. “That way, if you fall, you’ll be on the rope.” When I looked up at the wall of ice, it was beautiful but completely foreign...I had no idea where I’d even begin to climb it. Conrad, on the other hand, looked like he was saying hi to an old friend. 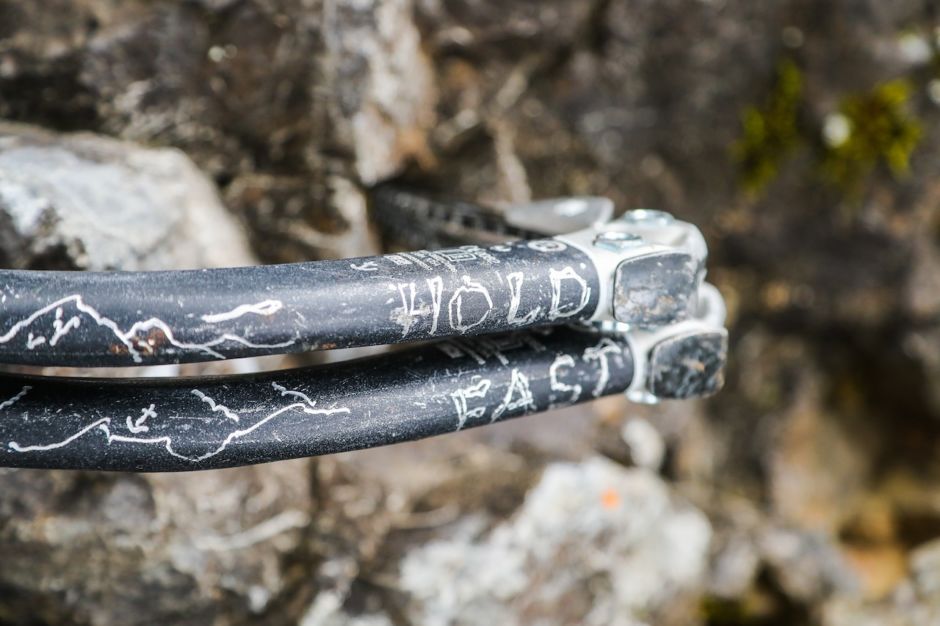 Conrad engraves each pair of his ice axes with the same statement. “Hold Fast” is a favorite mantra, and he’s known for doing just that. He rarely falls. 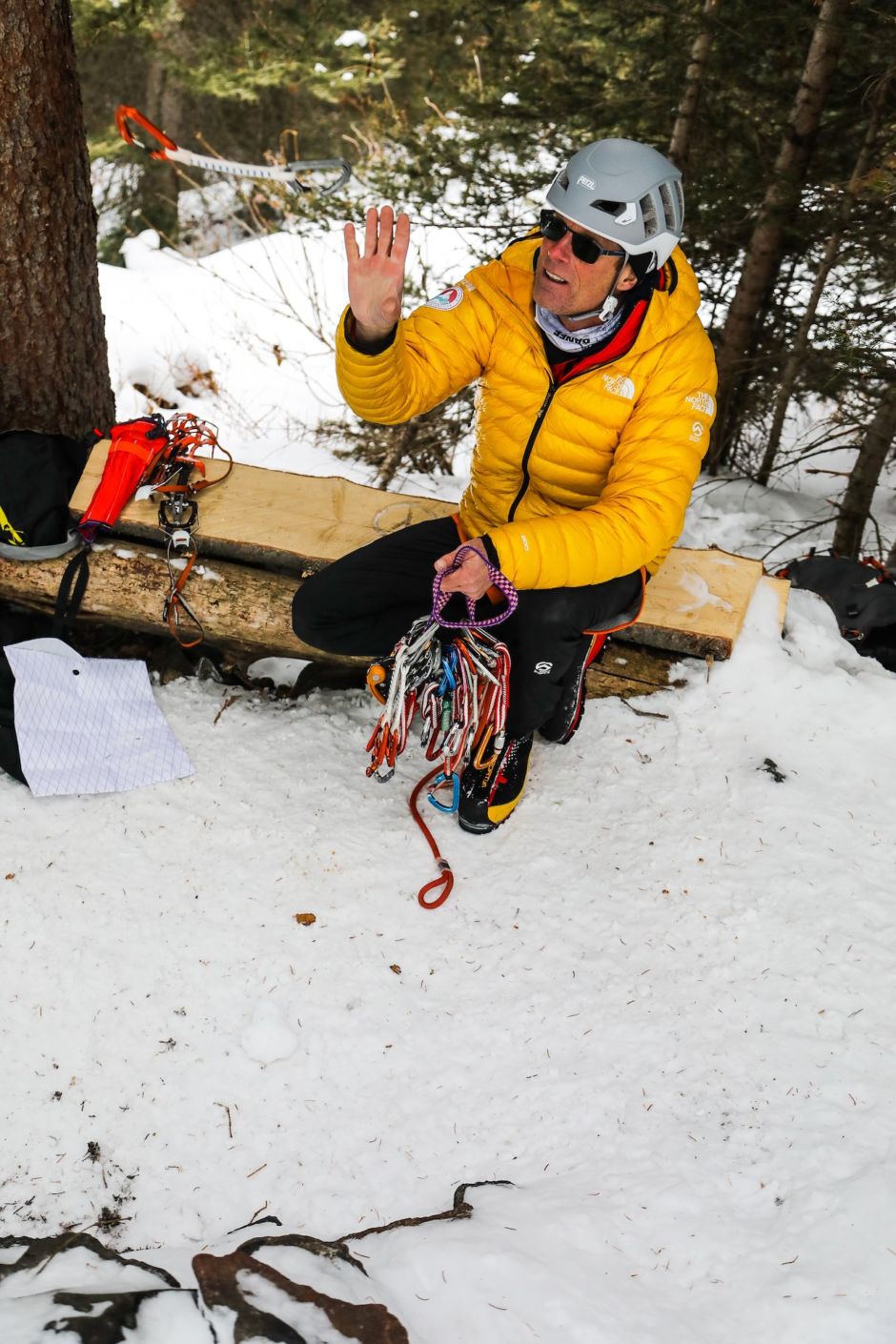 As Conrad got ready to climb, he gave me a few quick pointers. “Use your crampons. Trust the tools. Don’t grip too hard. ”I wasn’t sure what he meant by that last one but soon found out. The ice axe is shaped to support your hand so you don’t have to strangle it and burn out your forearms unnecessarily. Which is, of course, easier said then done when you’re 50 feet above the ground hanging on a vertical wall of ice. 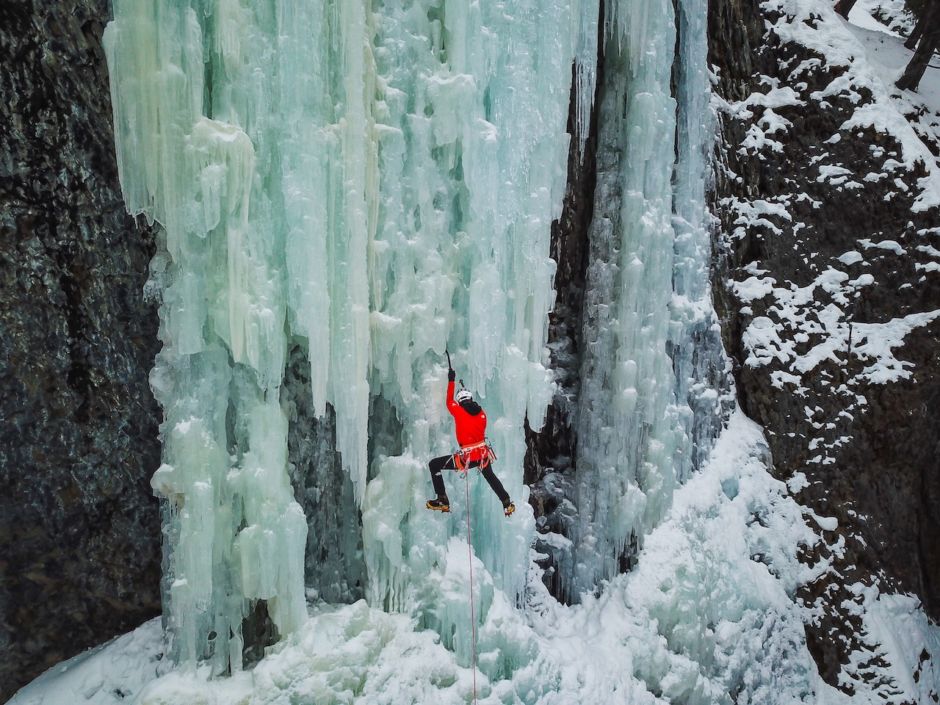 Watching Conrad approach the climb was fascinating. He went into a super relaxed state, moving languidly up to the ice and then smoothly transitioning into the vertical world. The whole process looked extremely natural and relaxed. His agility and spatial awareness on the icefall was astounding. It was obvious he was enjoying himself. 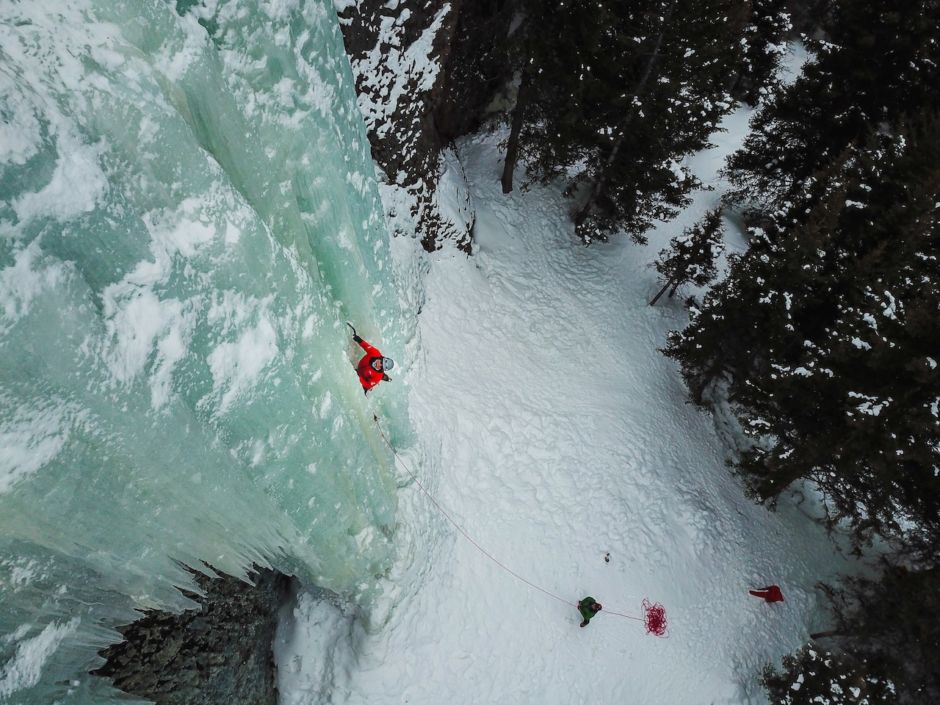 As he moved up the ice, he started to pick up speed. There I was, on belay for Conrad freaking Anker, and I could barely keep up as he placed each ice screw, drilled it into the ice, snapped in a carabiner, and clicked the rope through. I was mesmerized by his elegance, fluidity, and rhythm. 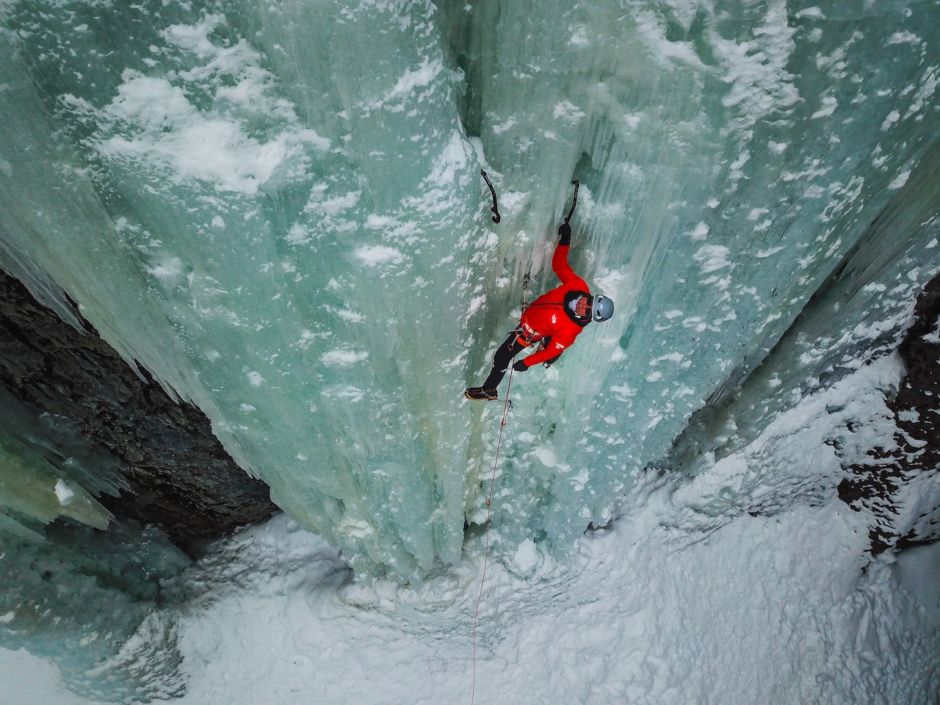 Conrad Anker perched on the icefall, taking a moment during the climb to enjoy the view and say hi to the birds...and the drone. 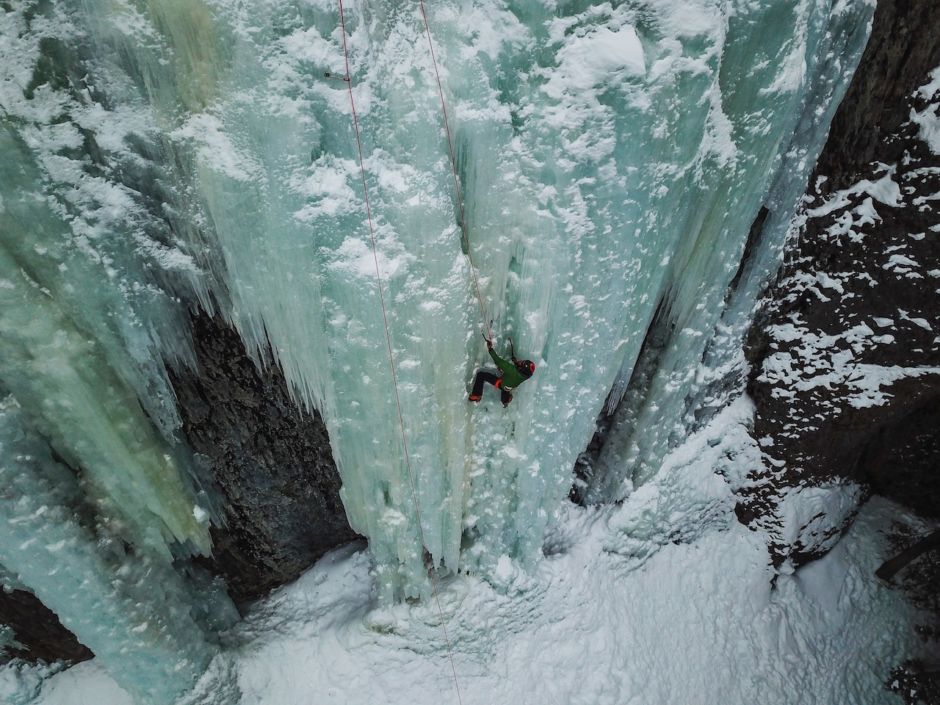 Climb on! After Conrad set up the top rope anchors he called down and had me lower him back to the ground, and then it was my turn. He handed me his ultralight “Hold Fast” axes and said one more time, “Don’t grip too hard.” That was it. I followed his footsteps up to the icefall, trying to look as calm and collected as he did. The first few steps were awkward in my crampons. Once I got on the ice, though, they were amazing. Between the ice axe and the crampons, you have a tremendous amount of control. It’s incredible to feel the ice axe take hold and kick the sharp crampons into the ice. 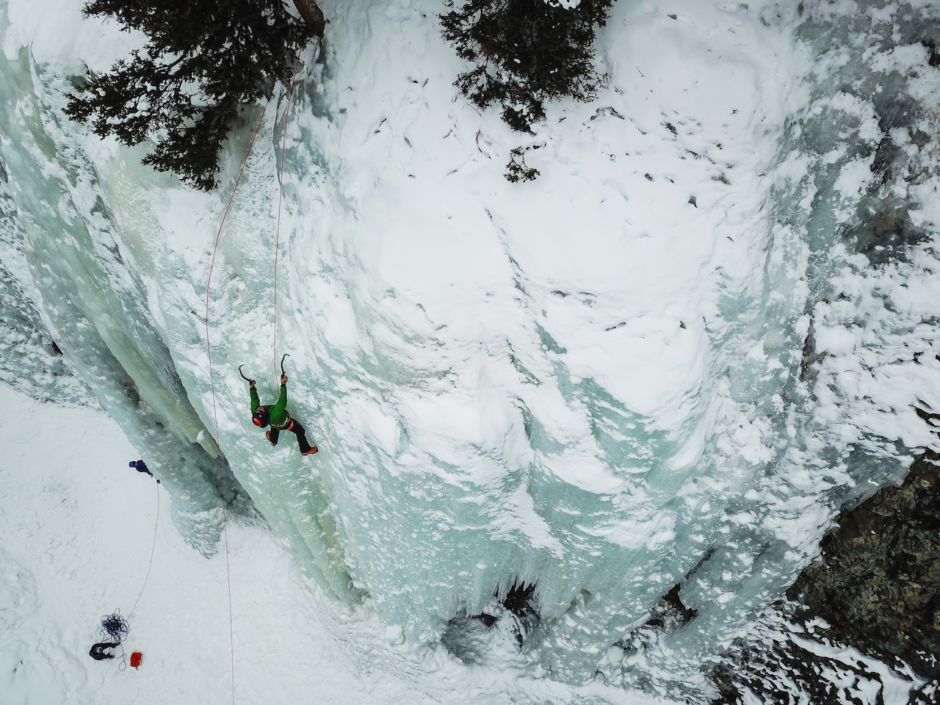 Here I am, nearing the top of the climb. Sweating profusely with my forearms bulging from gripping too hard. As the icefall became less vertical, the sharp ice axes and crampons began to feel less reliable. This was definitely the toughest part of the climb for me. 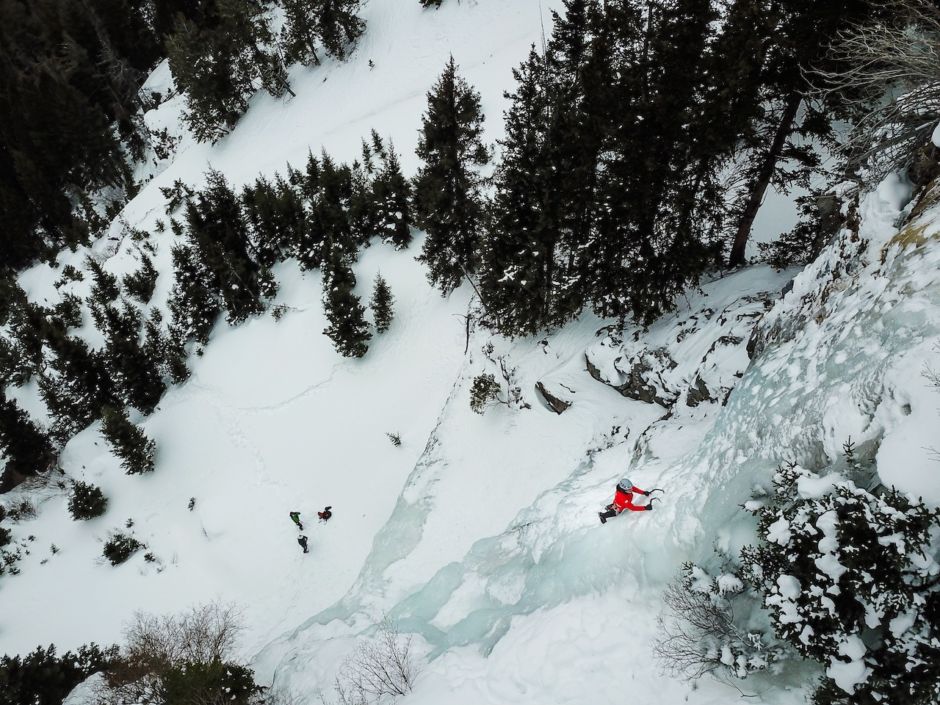 On to the next climb! I am way down below, keeping an eye out for chunks of ice crashing down as Conrad works his way up this beautiful two-tiered icefall in Hyalite Canyon. 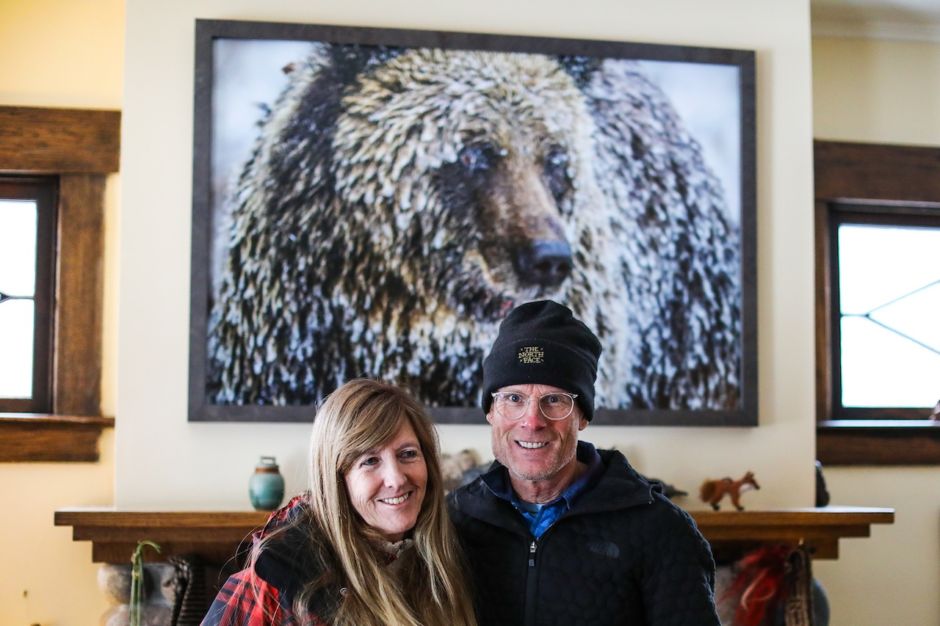 Thank you, Conrad and Jenni! What a day. We finished the adventure back at Conrad’s house in the sauna, followed by a delicious home-cooked meal. I don’t think I could have asked for a better first experience ice climbing. It was challenging but also incredibly rewarding and such an amazing feeling to chink your way up a frozen waterfall with ice axes and crampons. Especially learning from a master of ice and rock climbing like Conrad Anker.

A Cross-Country Skier's Guide To Yellowstone