TODAY IS THE UN International Day of Human Space Flight. It’s also the 56th anniversary of the first human going into space. On April 12, 1961, Russian cosmonaut Yuri Gargarin launched into space, becoming the first human to leave our atmosphere. Since then, hundreds of people have been in space, but it still remains mostly untouched by humans.

That seems to be on the brink of changing: next year, SpaceX will take paying tourists around the dark side of the moon, a place no one has been since Apollo 13. And there’s an okay chance that, in the not-too-far-off future, humans will land on Mars.

In honor of the day, we plunged into the NASA Goddard Space Flight Center’s Flickr account. It is one of the coolest photo pages on the internet, so we’ve selected a handful to share in honor of space flight. With any luck, we’ll get to see these sights for ourselves someday. 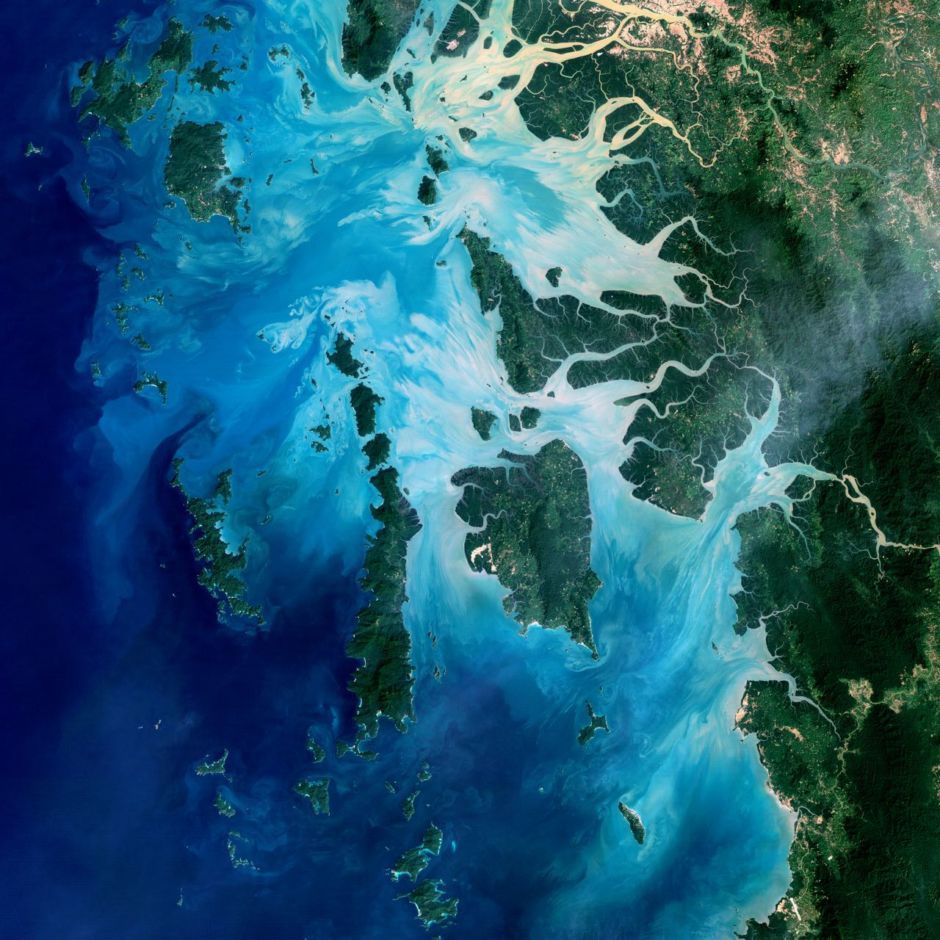 In the southernmost reaches of Burma (Myanmar), along the border with Thailand, lies the Mergui Archipelago. The archipelago in the Andaman Sea is made up of more than 800 islands surrounded by extensive coral reefs. All photos and captions by The NASA Goddard Space Flight Center. 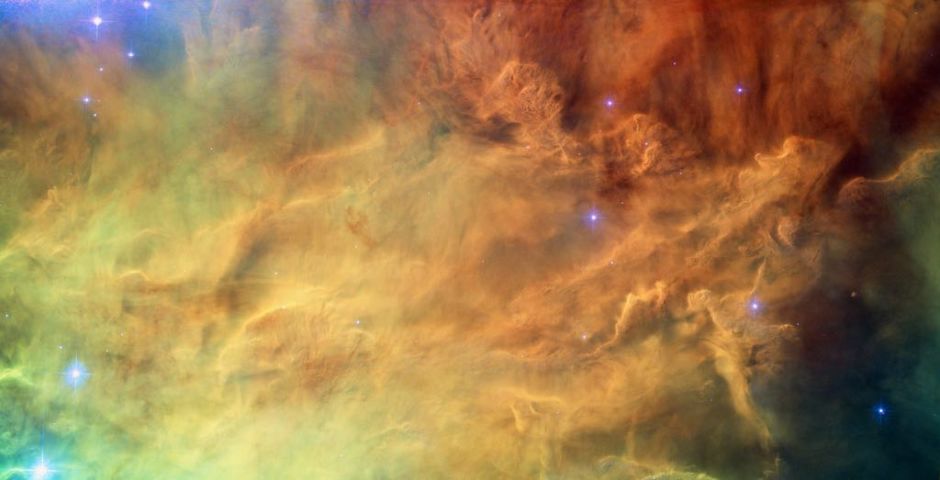 A spectacular new NASA/ESA Hubble Space Telescope image reveals the heart of the Lagoon Nebula. Seen as a massive cloud of glowing dust and gas, bombarded by the energetic radiation of new stars, this placid name hides a dramatic reality. The Advanced Camera for Surveys (ACS) on the NASA/ESA Hubble Space Telescope has captured a dramatic view of gas and dust sculpted by intense radiation from hot young stars deep in the heart of the Lagoon Nebula (Messier 8). This spectacular object is named after the wide, lagoon-shaped dust lane that crosses the glowing gas of the nebula. 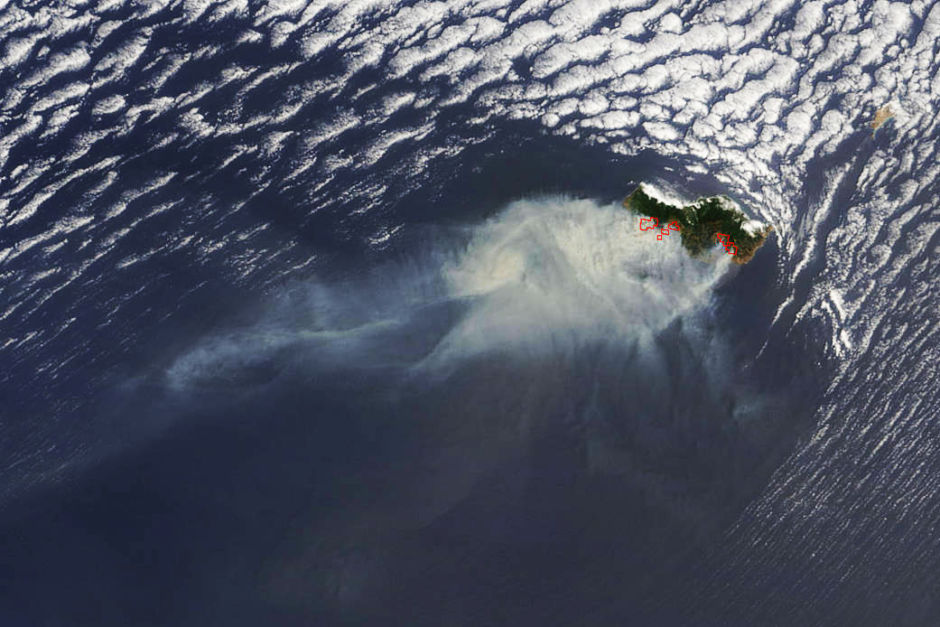 Smoke from several large fires burning on Portugal's Madeira Island were seen blowing over the Atlantic Ocean on Aug. 10 when NASA's Terra satellite passed overhead. Madeira is an archipelago of four islands located off the northwest coast of Africa. They are an autonomous region of Portugal. The Moderate Resolution Imaging Spectroradiometer (MODIS) on NASA’s Terra satellite captured this natural-color image at 8:25 a.m. EDT (12:05 UTC). Places where MODIS detected active fire are located in red.

Cyclones across the Pacific

This GOES-West satellite image shows four tropical cyclones in the North Western, Central and Eastern Pacific Ocean on September 1, 2015. In the Western Pacific (far left) is Typhoon Kilo. Moving east (to the right) into the Central Pacific is Hurricane Ignacio (just east of Hawaii), and Hurricane Jimena. The eastern-most storm is Tropical Depression 14E in the Eastern Pacific. 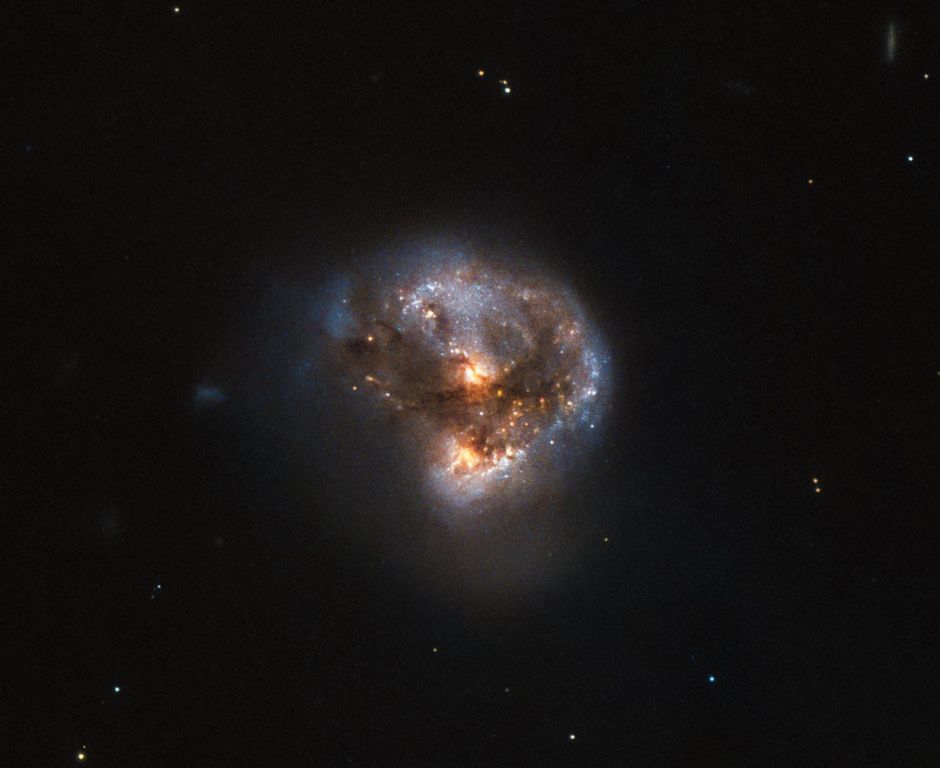 This galaxy has a far more exciting and futuristic classification than most — it hosts a megamaser. Megamasers are intensely bright, around 100 million times brighter than the masers found in galaxies like the Milky Way. The entire galaxy essentially acts as an astronomical laser that beams out microwave emission rather than visible light (hence the ‘m’ replacing the ‘l’). 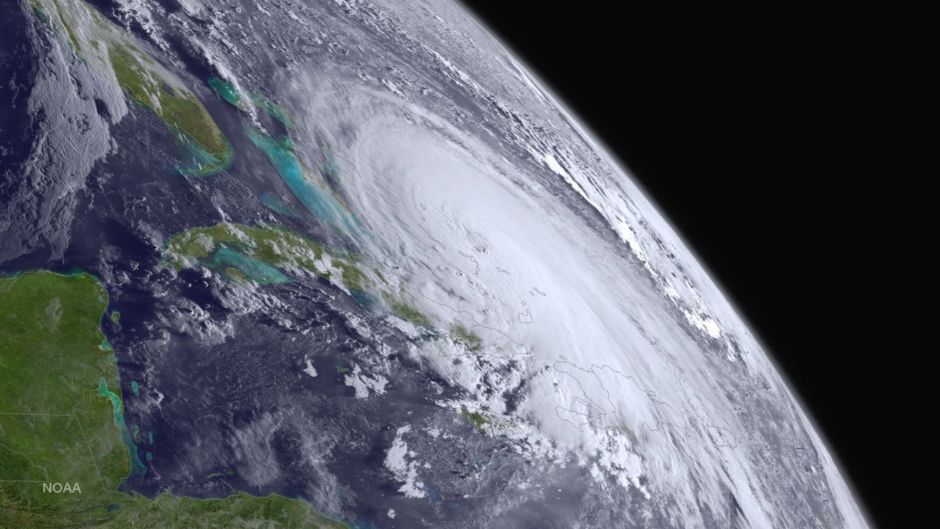 Major Hurricane Joaquin is shown at the far eastern periphery of the GOES West satellite's full disk extent, taken at 1200Z on October 1, 2015. 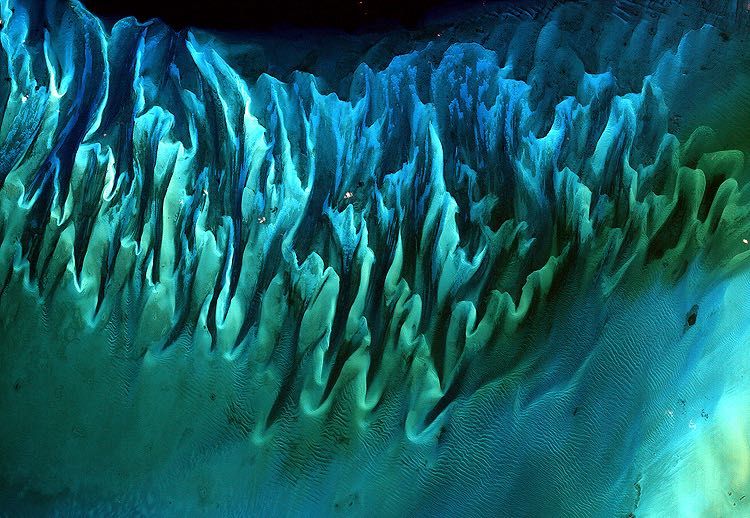 Though the above image may resemble a new age painting straight out of an art gallery in Venice Beach, California, it is in fact a satellite image of the sands and seaweed in the Bahamas. The image was taken by the Enhanced Thematic Mapper plus (ETM+) instrument aboard the Landsat 7 satellite. Tides and ocean currents in the Bahamas sculpted the sand and seaweed beds into these multicolored, fluted patterns in much the same way that winds sculpted the vast sand dunes in the Sahara Desert. 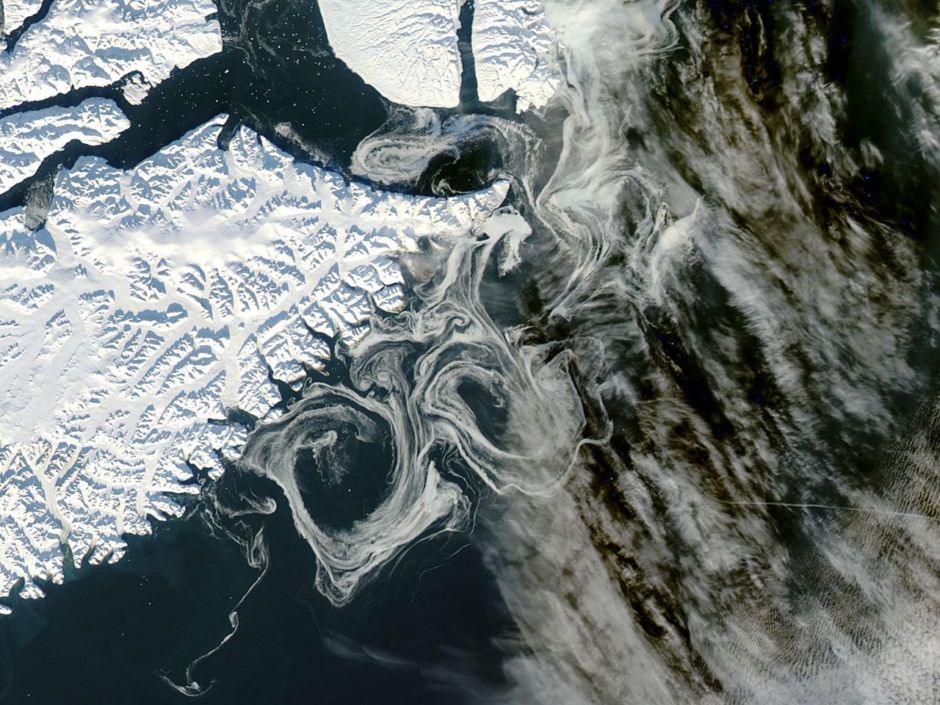 The MODIS instrument on NASA's Aqua satellite captured this visible image of Sea Ice off eastern Greenland on October 16, 2012. 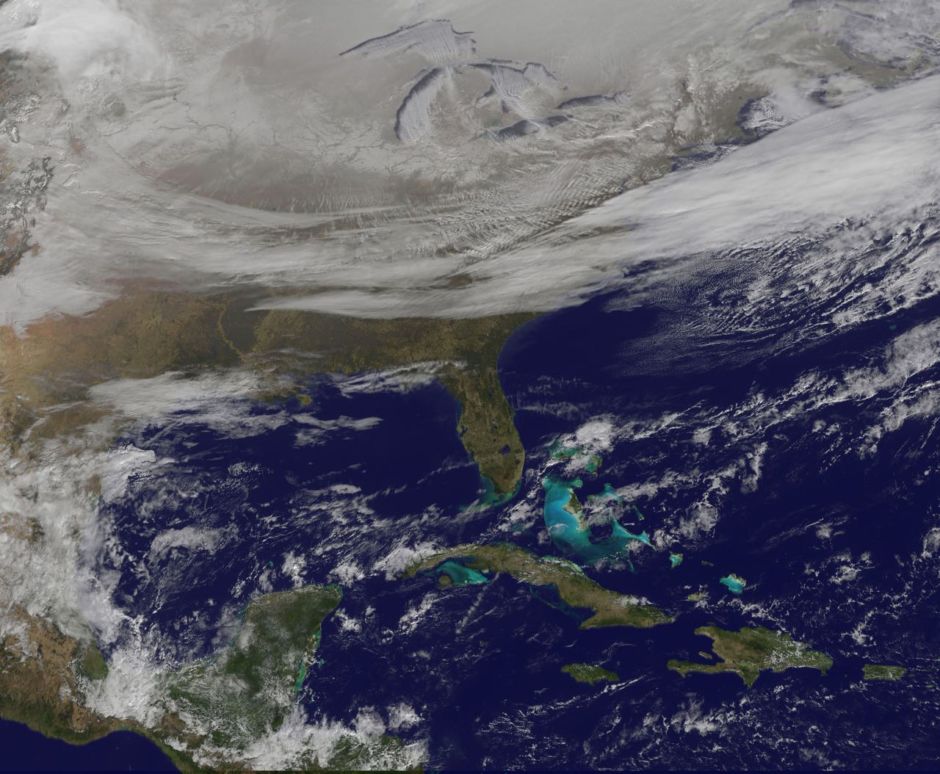 The US covered in snow

NOAA's GOES-East satellite provided a look at the frigid eastern two-thirds of the U.S. on Jan. 7, 2015, that shows a blanket of northern snow, lake-effect snow from the Great Lakes and clouds behind the Arctic cold front. 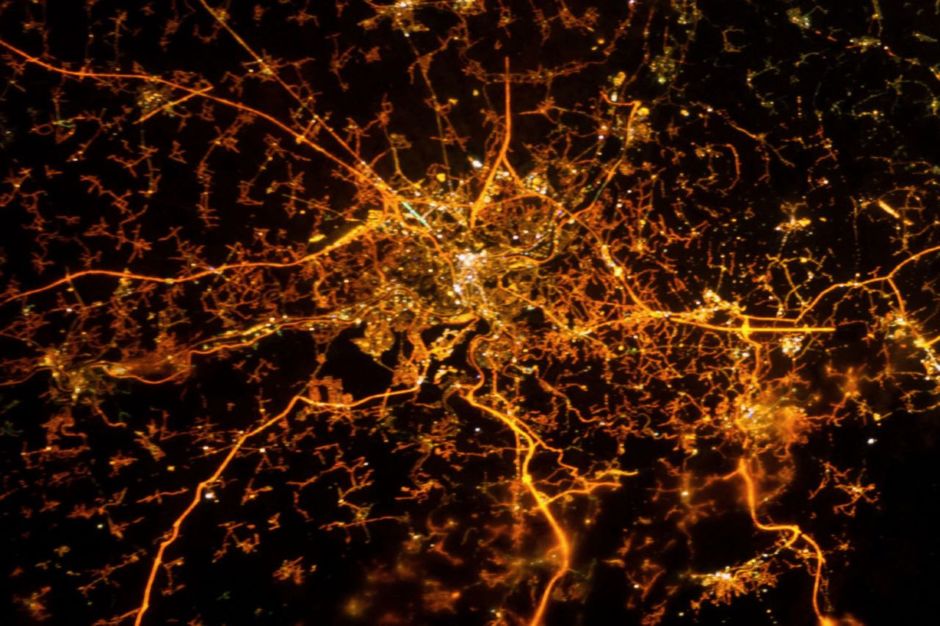 A nighttime view of Liege, Belgium is featured in this image photographed by an Expedition 34 crew member on the International Space Station. 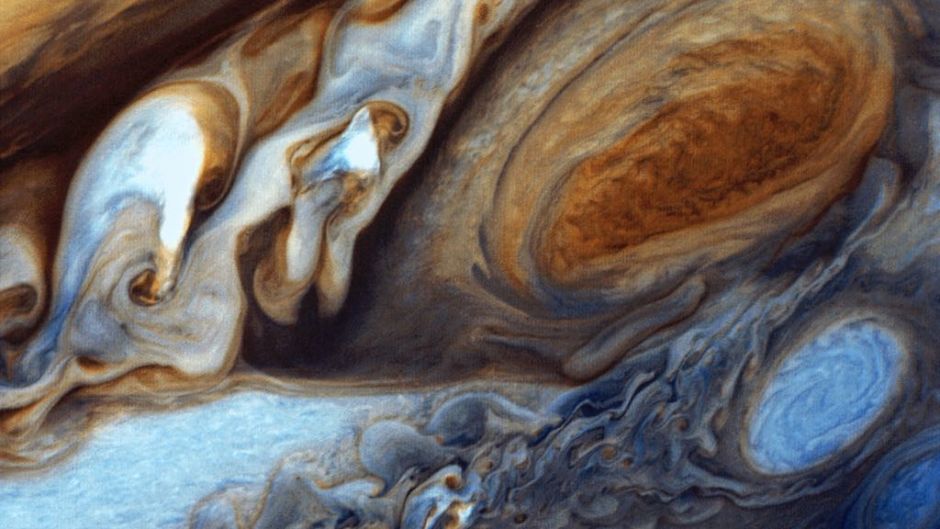 At about 89,000 miles in diameter, Jupiter could swallow 1,000 Earths. It is the largest planet in the solar system and perhaps the most majestic. Vibrant bands of clouds carried by winds that can exceed 400 mph continuously circle the planet's atmosphere. Such winds sustain spinning anticyclones like the Great Red Spot—a raging storm three and a half times the size of Earth located in Jupiter’s southern hemisphere. In January and February 1979, NASA's Voyager 1 spacecraft zoomed toward Jupiter, capturing hundreds of images during its approach. The observations revealed many unique features of the planet that are still being explored to this day. 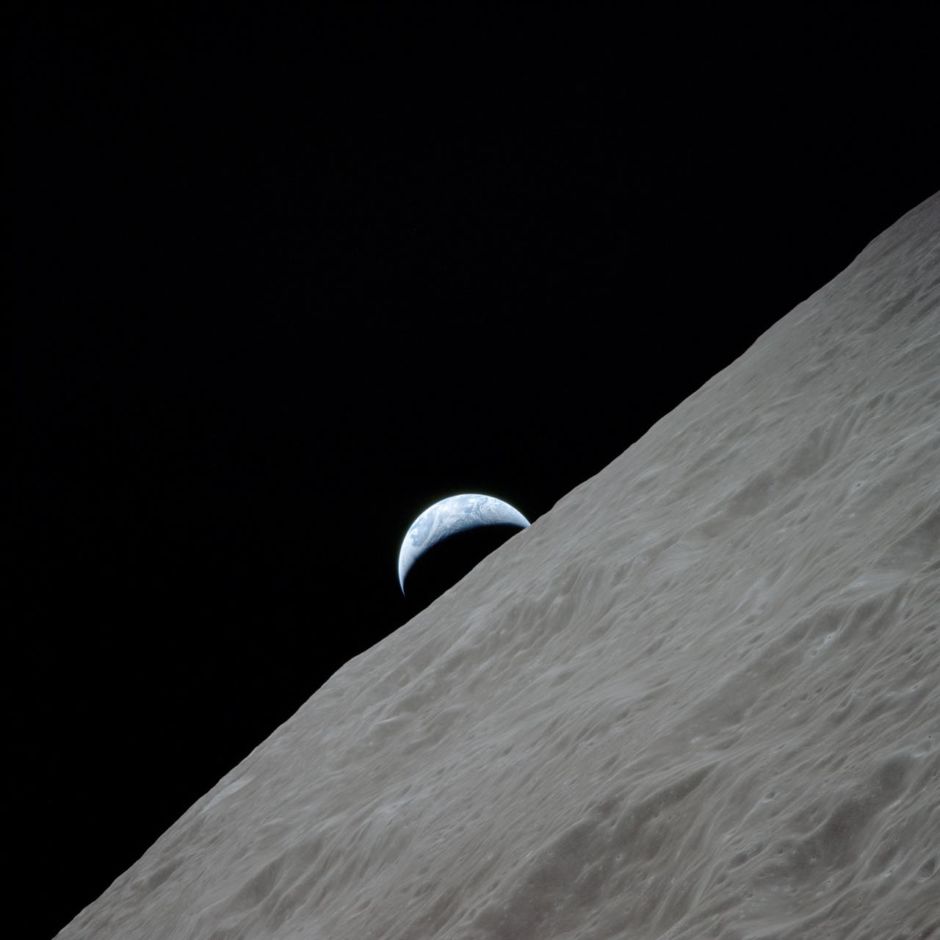 View of the crescent Earth rising above the lunar horizon over the Ritz Crater. Image taken during the Apollo 17 mission on Revolution 66. 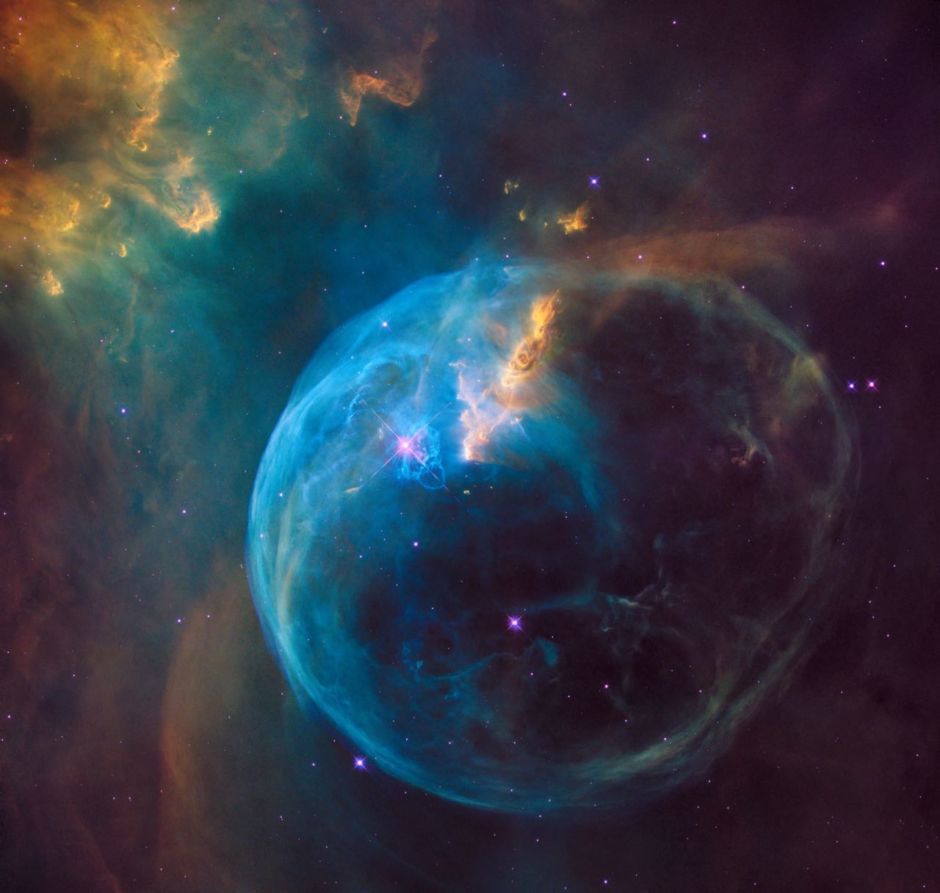 “As Hubble makes its 26th revolution around our home star, the sun, we celebrate the event with a spectacular image of a dynamic and exciting interaction of a young star with its environment. The view of the Bubble Nebula, crafted from WFC-3 images, reminds us that Hubble gives us a front row seat to the awe inspiring universe we live in,” said John Grunsfeld, Hubble astronaut and associate administrator of NASA’s Science Mission Directorate at NASA Headquarters, in Washington, D.C. The Bubble Nebula is seven light-years across—about one-and-a-half times the distance from our sun to its nearest stellar neighbor, Alpha Centauri, and resides 7,100 light-years from Earth in the constellation Cassiopeia. 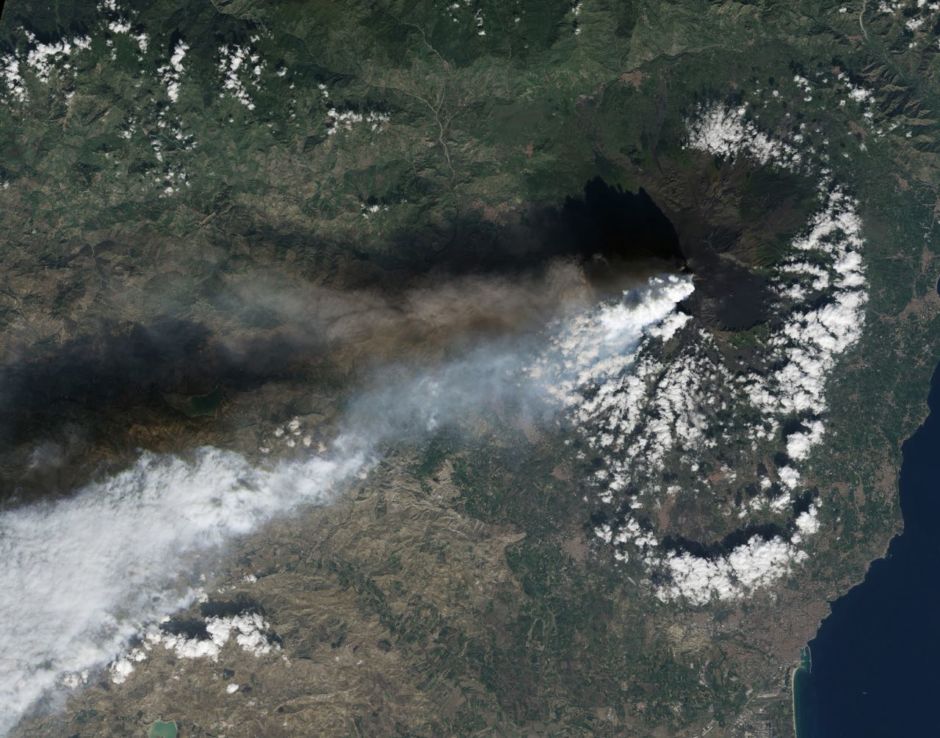 Twin volcanic plumes—one of ash, one of gas—rose from Sicily’ Mount Etna on the morning of October 26, 2013. 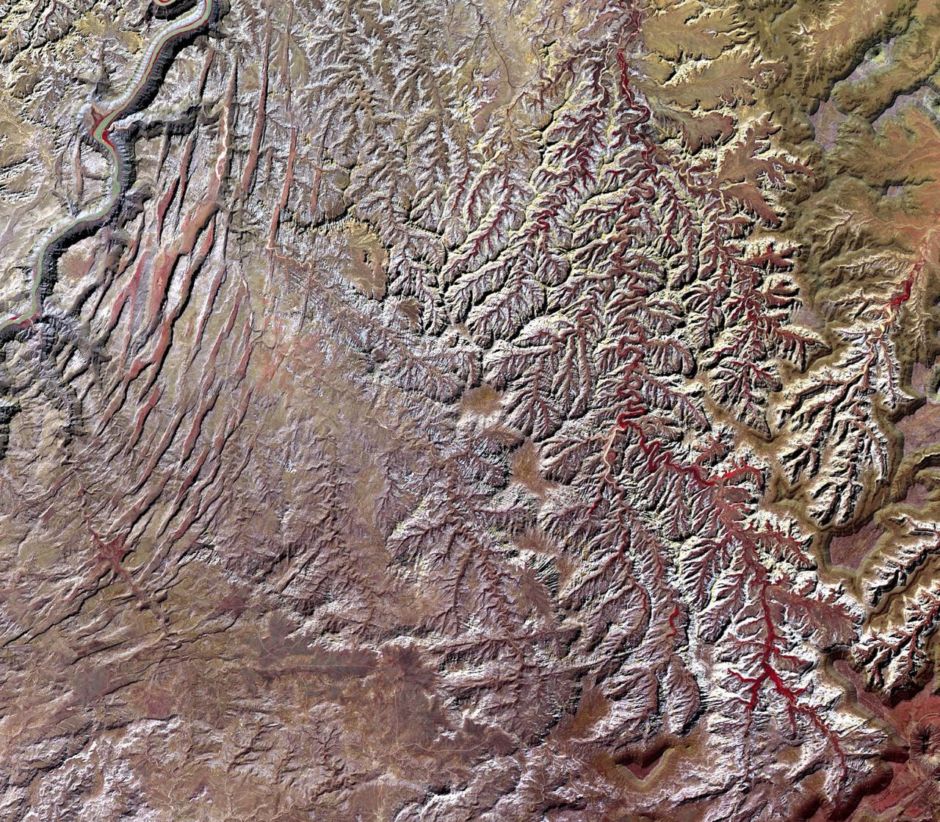 The desert southwest US is a showcase of geology. Canyonlands National Park in SE Utah is one such example. In this image, the Colorado River in the upper left corner forms the border of an area of outcrops of Permian (~280 million years old) Cedar Mesa Sandstone. Nearest the river, a series of arcuate faults has created a landscape of extremely narrow valleys. Further east a tributary of the Colorado has eroded the landscape into intricate feather-like drainage patterns. 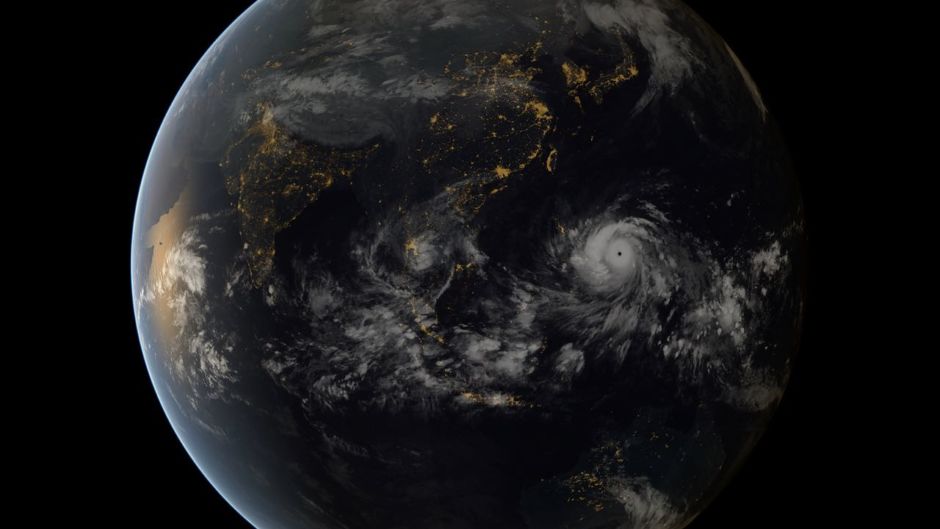 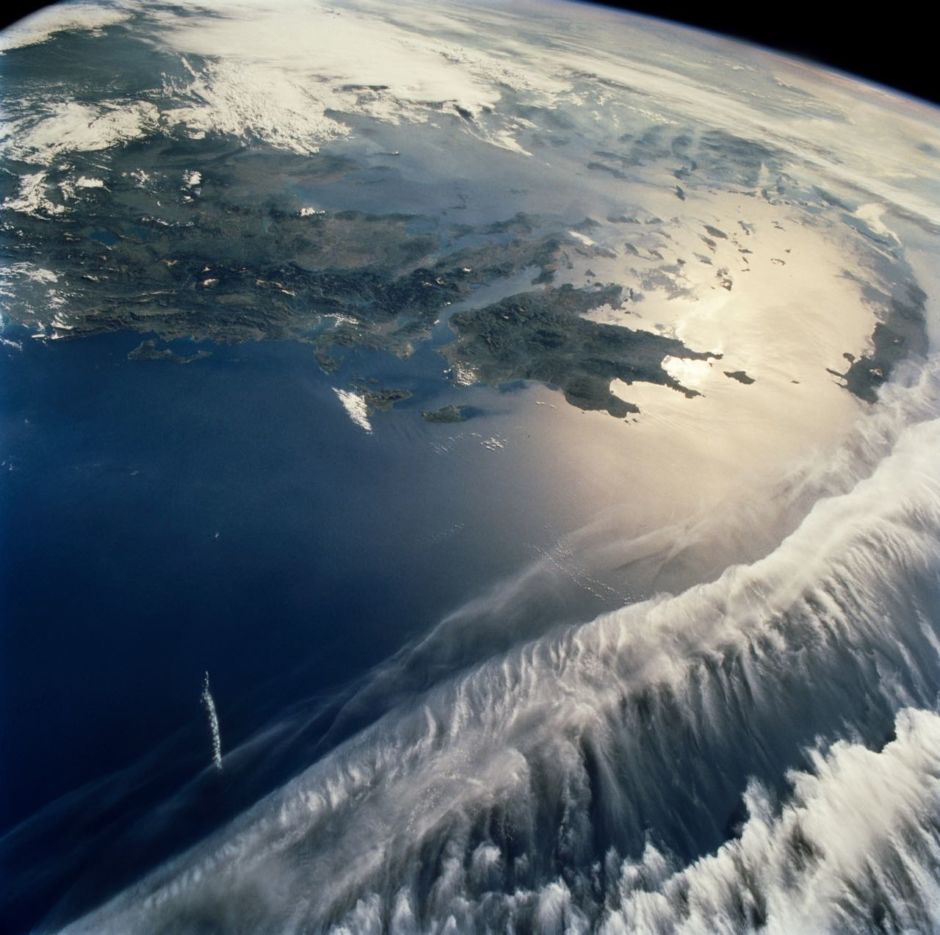 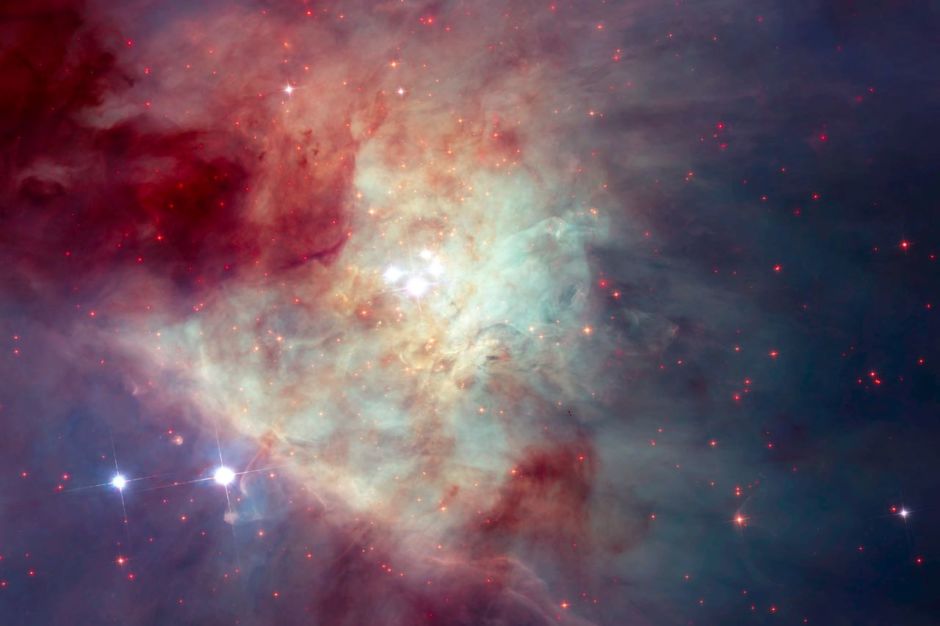 NASA's Hubble Space Telescope has helped astronomers find the final piece of a celestial puzzle by nabbing a third runaway star. As British royal families fought the War of the Roses in the 1400s for control of England's throne, a grouping of stars was waging its own contentious skirmish — a star war far away in the Orion Nebula. The stars were battling each other in a gravitational tussle, which ended with the system breaking apart and at least three stars being ejected in different directions. The speedy, wayward stars went unnoticed for hundreds of years until, over the past few decades, two of them were spotted in infrared and radio observations, which could penetrate the thick dust in the Orion Nebula. 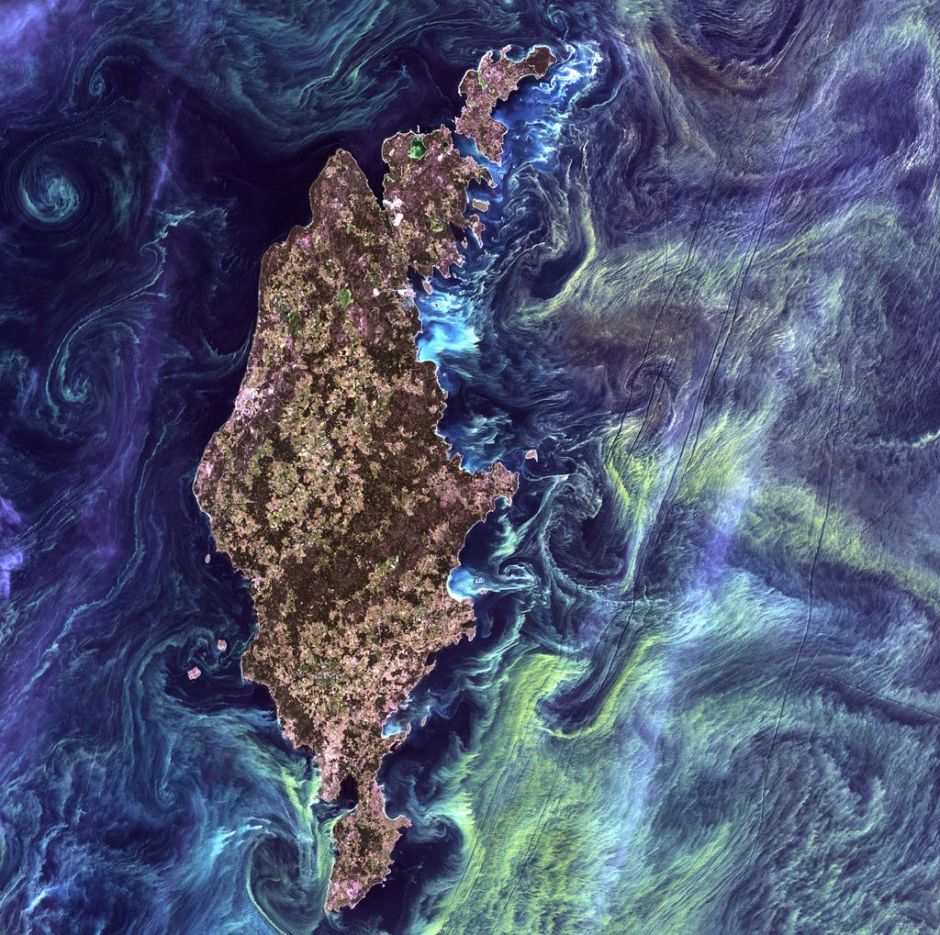 In the style of Van Gogh's painting "Starry Night," massive congregations of greenish phytoplankton swirl in the dark water around Gotland, a Swedish island in the Baltic Sea. Phytoplankton are microscopic marine plants that form the first link in nearly all ocean food chains. Population explosions, or blooms, of phytoplankton, like the one shown here, occur when deep currents bring nutrients up to sunlit surface waters, fueling the growth and reproduction of these tiny plants. 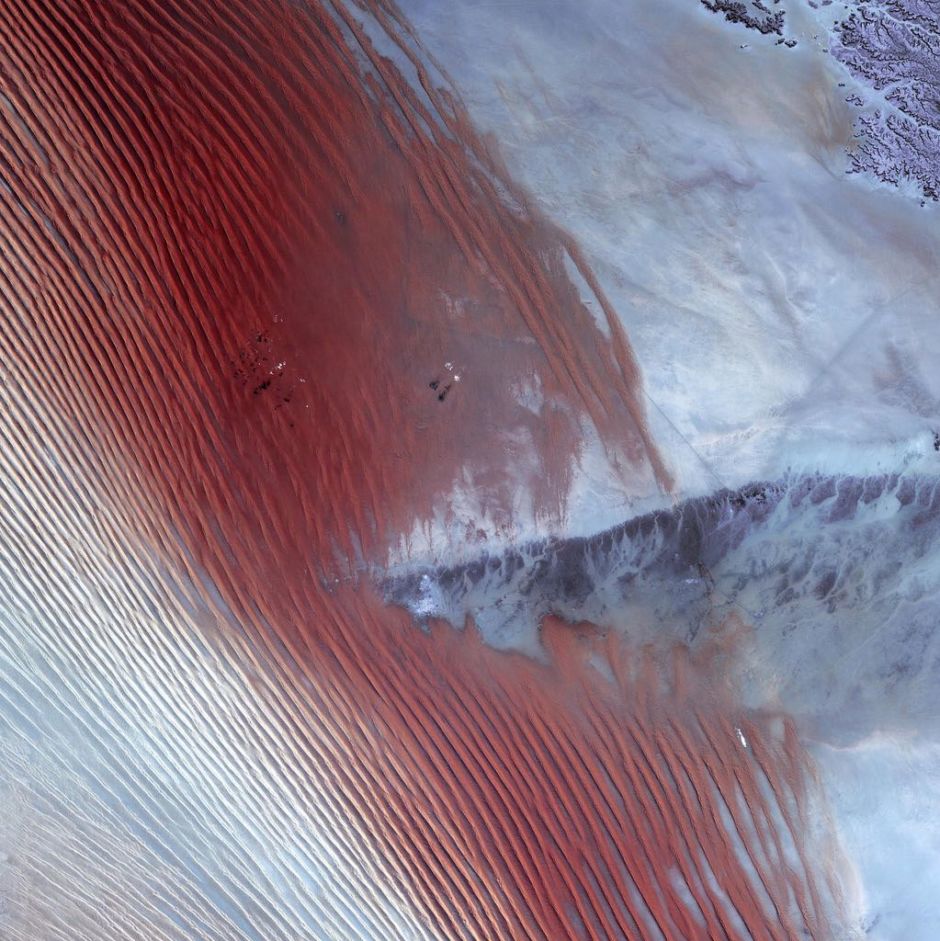 White pinpricks of cloud cast ebony shadows on the Rub' al Khali, or Empty Quarter, near the border between Saudi Arabia and Yemen. The lines of wind-sculpted sand are characteristic of immense sand deserts, or sand seas, and the Rub' al Khali is the largest desert of this type in the world. A highland ridge is just high enough to disturb the flow of the lines. In the center of that interruption lies the Saudi Arabian town of Sharurah. 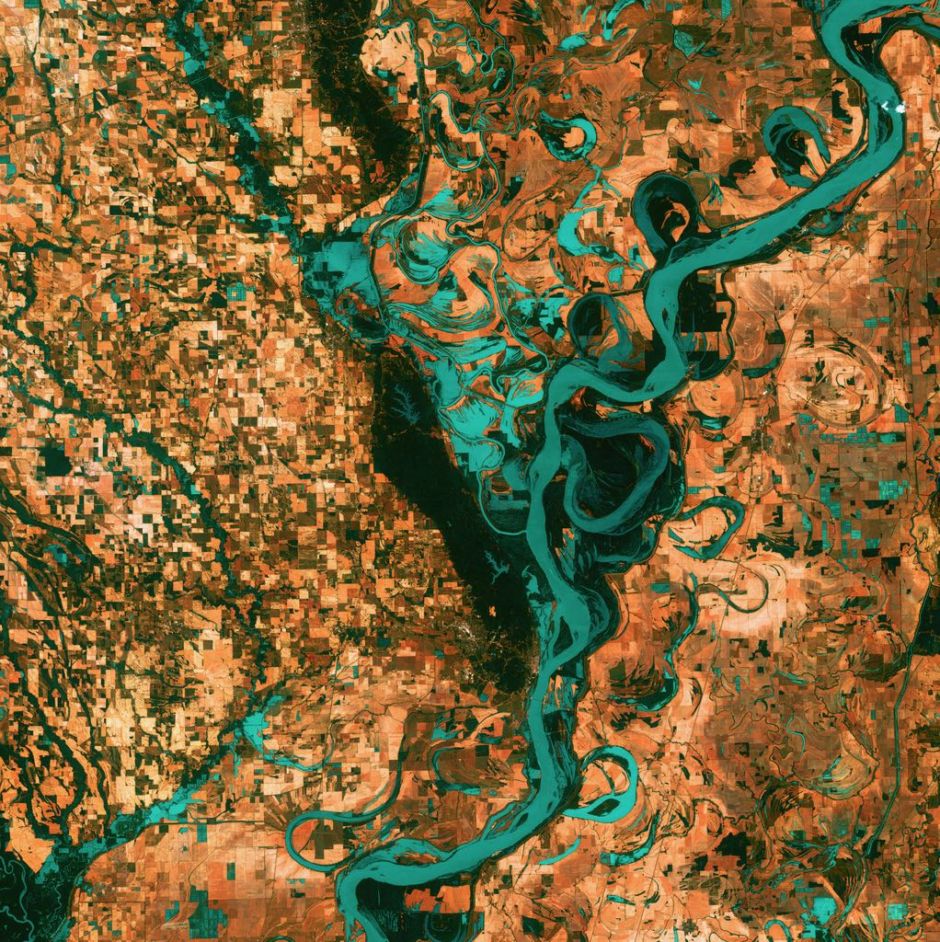 Small, blocky shapes of towns, fields, and pastures surround the graceful swirls and whorls of the Mississippi River. Countless oxbow lakes and cutoffs accompany the meandering river south of Memphis, Tennessee, on the border between Arkansas and Mississippi, USA. The "mighty Mississippi" is the largest river system in North America. 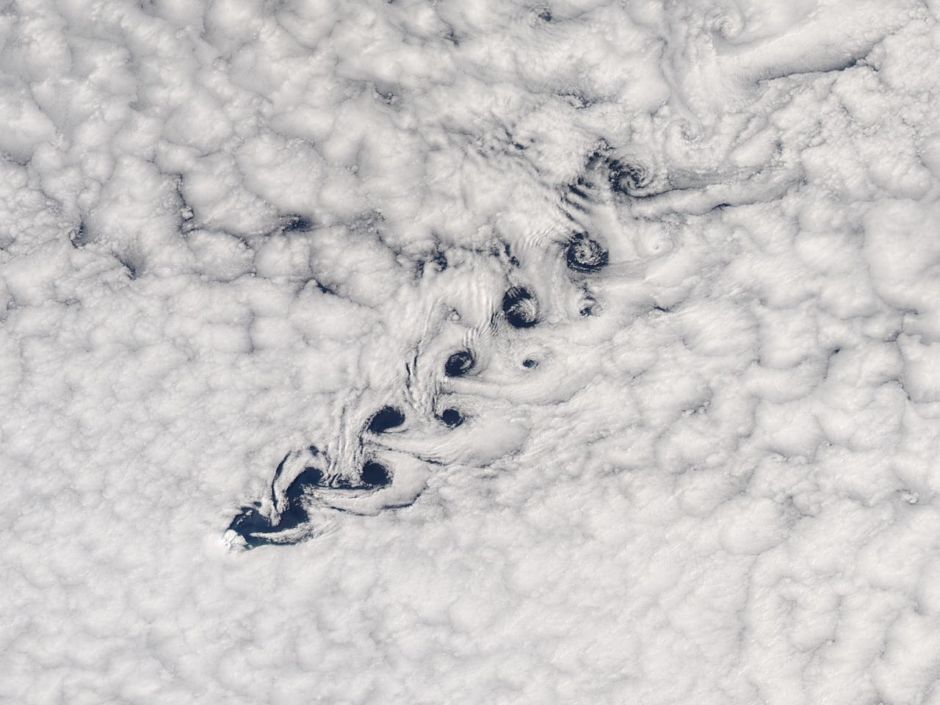 Hubble Sees Monstrous Cloud Boomerang Back to our Galaxy

Hubble Space Telescope astronomers are finding that the old adage “what goes up must come down” even applies to an immense cloud of hydrogen gas outside our Milky Way galaxy. The invisible cloud is plummeting toward our galaxy at nearly 700,000 miles per hour. Though hundreds of enormous, high-velocity gas clouds whiz around the outskirts of our galaxy, this so-called “Smith Cloud” is unique because its trajectory is well known. New Hubble observations suggest it was launched from the outer regions of the galactic disk, around 70 million years ago. The cloud was discovered in the early 1960s by doctoral astronomy student Gail Smith, who detected the radio waves emitted by its hydrogen. This composite image shows the size and location of the Smith Cloud on the sky. The cloud appears in false-color, radio wavelengths as observed by the Green Bank Telescope in West Virginia. The visible-light image of the background star field shows the cloud's location in the direction of the constellation Aquila.