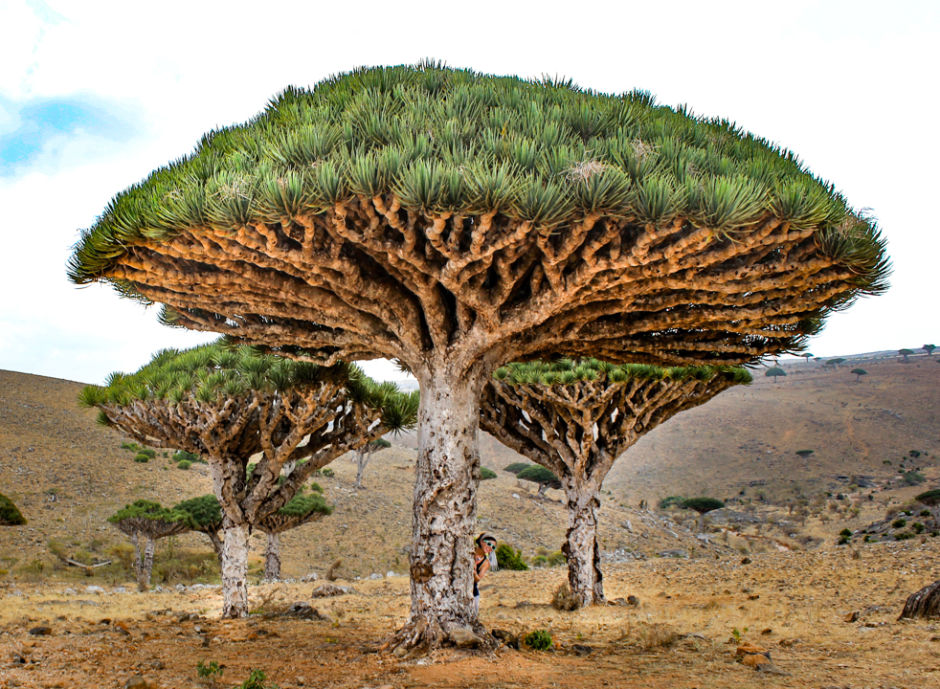 Socotra, Yemen's offshore territory gives us a good idea of what Earth looked like before the great Miocene Epoch. The Socotra Archipelago was isolated in the Arabian Sea millions of years ago. Time has allowed its endemic species to thrive in their ancient forms. The most notable is the umbrella-like Dragon Blood Tree, named for the deep crimson the tree bleeds when the bark is slashed. The tree has adopted an unusual shape to survive in the arid climate of Socotra Island. The island is home to over 700 endemic flora and fauna, many of which are almost entirely unknown to the rest of the world. 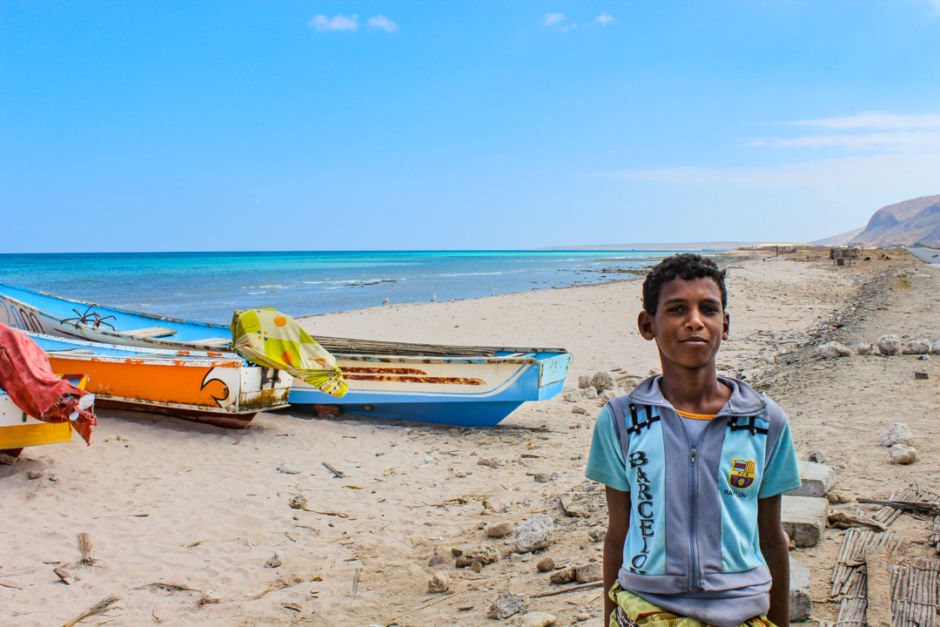 Outside the bustling Hadiboh fish market where Socotris from all over the island gather to haggle with fishermen, a young man led me to the nearby dhow boats on the beach. After long nights of fishing the shores of Socotra Island, fishermen arrive back in Hadiboh to try and sell their catch. The inhabitants of Socotra are a culture completely removed from their mainland Yemeni counterparts. A Semitic language completely unknown to the outside world is spoken. Many of the island women carry a DNA haplogroup found among no other people on Earth. Socotra was without an official currency, until 1967 when the island was unified as part of South Yemen. The Socotri people have been almost entirely cut off from the outside world since my 2014 visit, due in part to the proxy war raging on in mainland Yemen, and cyclone Megh. Yet, they have prevailed. 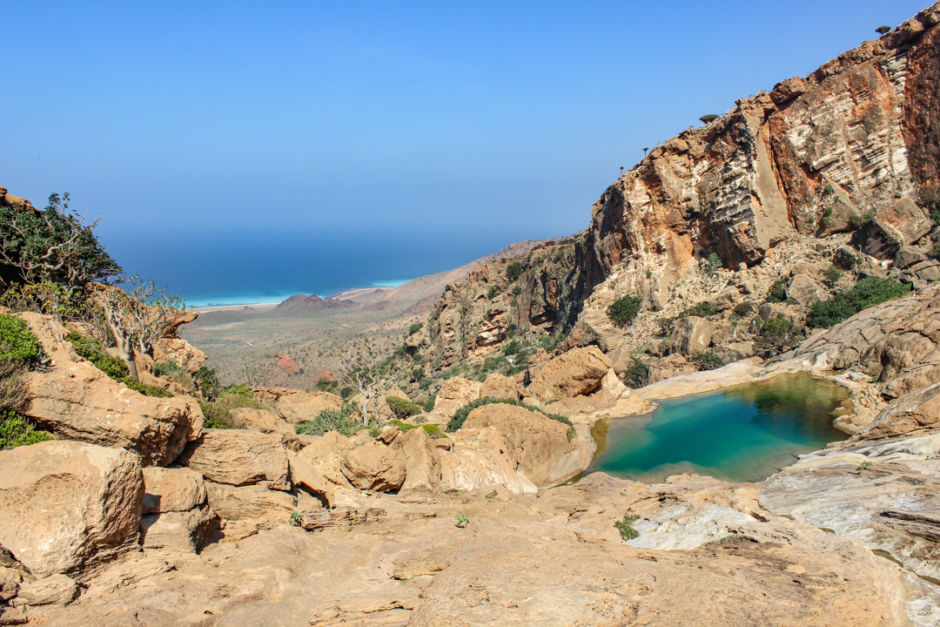 The Homhil Protected Area is known throughout Socotra Island for being the home to a diverse array of the island's unusual trees. Dragon Blood Trees dot the mountainsides while Acacia, Boswellia Socotrana (Endemic Sector Frankincense), Cucumber Trees and Bottle Trees crowd the wide valley. Perhaps the most amazing feature in this landscape is the natural infinity pool on the Cliffside, which has panoramic views of the coast and out into the Arabian Sea. 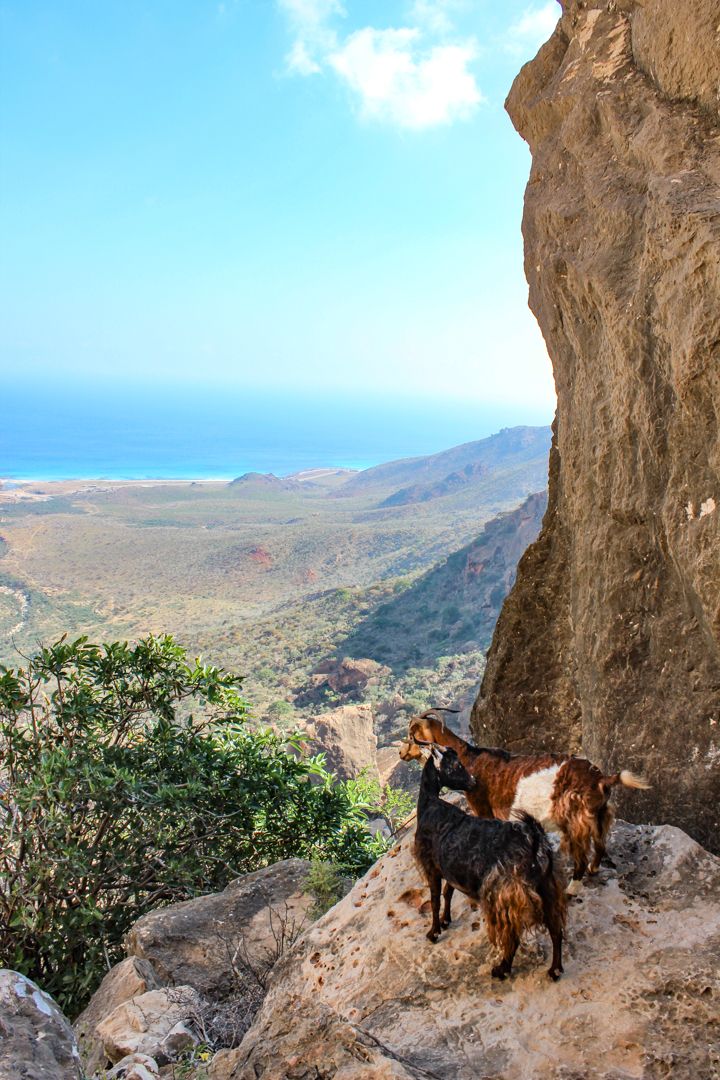 Goats were brought to Socotra by ancient sailors long ago, and have thrived on the island as a non-native species. They eat everything in sight. It is difficult now to find young, wild-grown endemic plant species such as the Dragon Blood Tree and the Bottle Tree because of goat’s appetite for destruction. Many endemic plants are now grown in Socotris' nurseries around the island in order for the endemics to thrive. Goats are even partly to blame for the erosion of Socotra Island. With no roots in stretches of the arid soil, there is no longer a binding to hold the loose dirt together. When monsoon season strikes, so do the landslides. 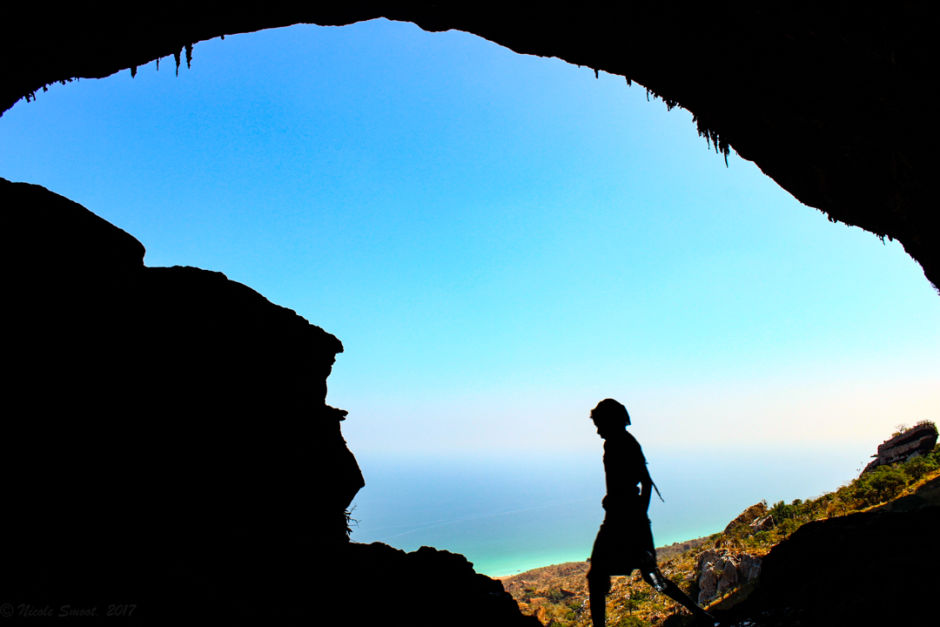 Hoq Cave faces toward the northeast out to the Arabian Sea, a short distance from Terbak Village. Hoq cave is one of the largest in the Middle East. It is undetermined just how large this cave even is, but speleologists have been studying it for the past several years -and Hoq Cave is not the largest cave on the island, it’s only the largest of the easily accessible caves. A young Socotri man guided us toward what felt like the center of the Earth. 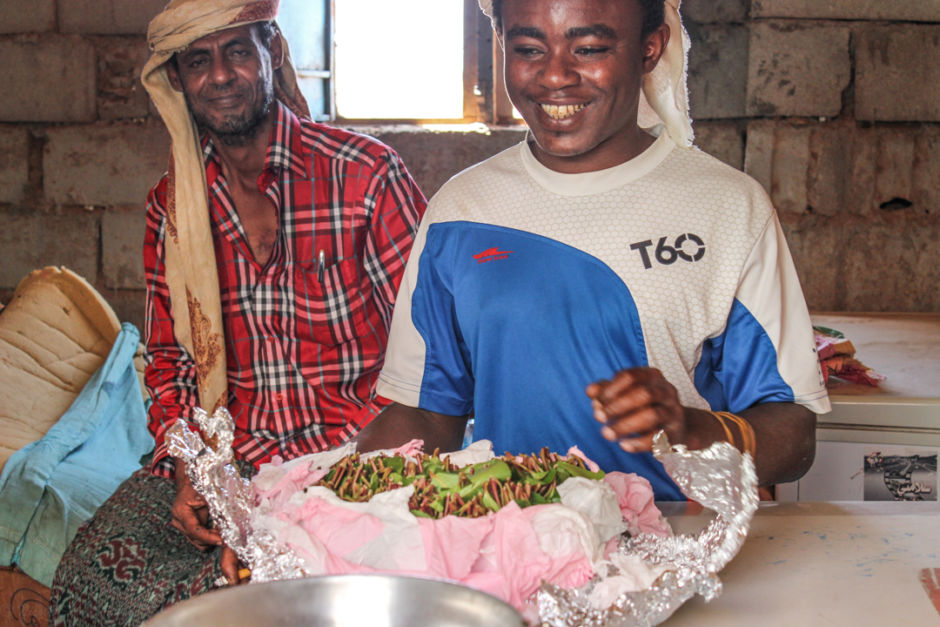 Qat (or khat or gat) is a mildly stimulating leafy plant that when chewed produces a mild euphoric, amphetamine-like high. By midafternoon all over mainland Yemen, as well as Ethiopia, Somalia, Djibouti, Kenya and Socotra, many men, some women too, stop what they’re doing to begin the evening qat session. Many within Socotra believe that qat makes them more productive and have accepted it as a daily part of life. In fact, Yemen has chewed itself dry and is starving itself to death - with most of the country’s water supply rapidly drying up in order to keep qat farms fertile, and vegetable and coffee farms being ripped out and replaced by the more profitable qat. Qat is ingrained as such a part of life that many Yemeni aren’t aware of just how controversial Qat is considered to the outside world, although the younger generation is beginning to recognize the problem. 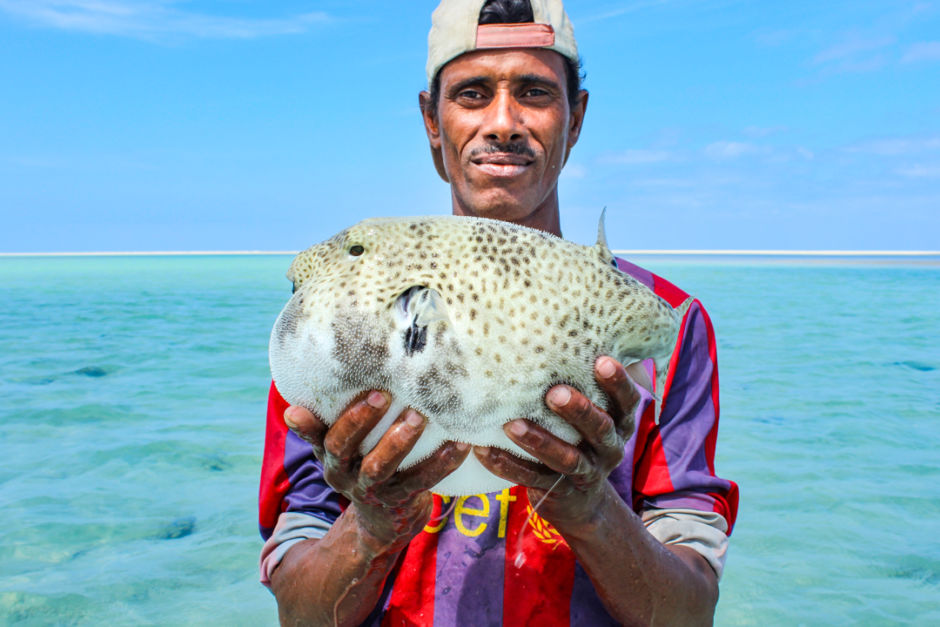 This is Abdullah, the Caveman. He takes tourists out to experience a day in his life as a Socotri fisherman. Abdullah is from the village of Qalansiya. He spends his days in the Detwah Lagoon fishing the waters by cast net and even by bare hand to feed his family and to give travelers a insight into the daily routine of many of Socotra’s coastal dwellers. 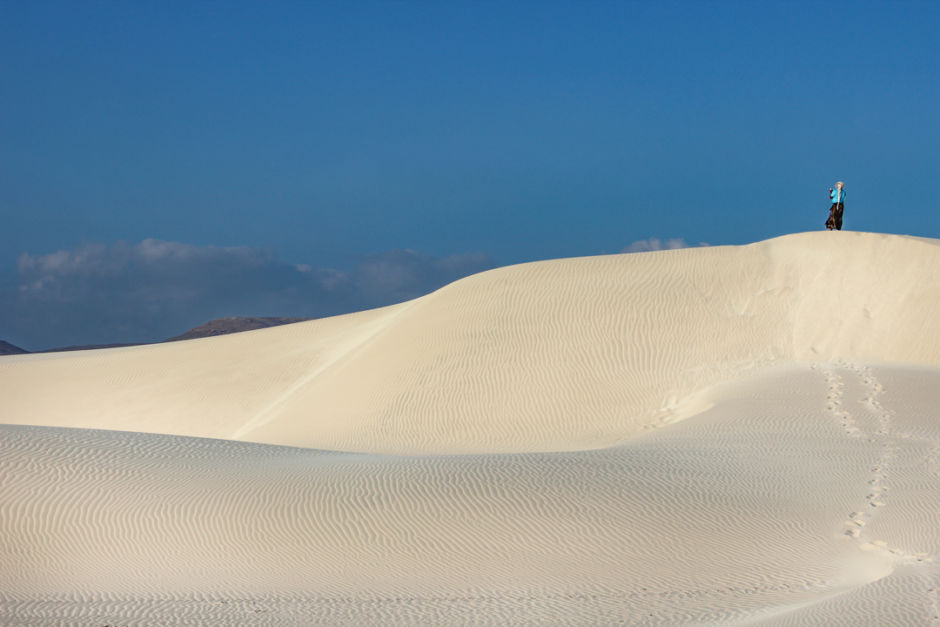 The late afternoon sun begins its descent over the Hayf sand dunes on Socotra's south-facing coast. The Hayf and nearby Zahek sand dunes are pushed up against the mountains that bisect Socotra and give way to the waters where the Arabian Sea meet the Indian Ocean. Ahmed, who commandeered the Landcruiser, stood atop one of the dunes to capture a photo to show his wife when he arrived back home. Ahmed spends his days navigating the jeep trails that connect the far-flung communities of the island. 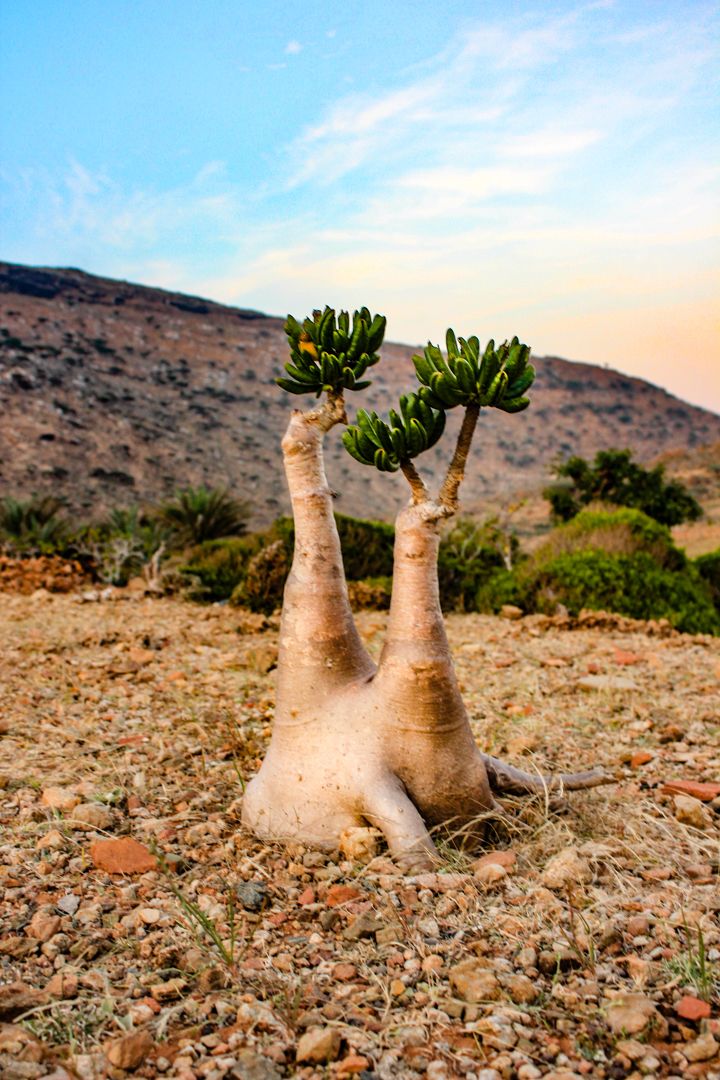 Here is the Adenium Obesum Socotranum, better known as the Bottle Tree or The Desert Rose. I came across one of the rare baby Bottle Trees while exploring the unique trees of the Homhil Protected Area near sunset. 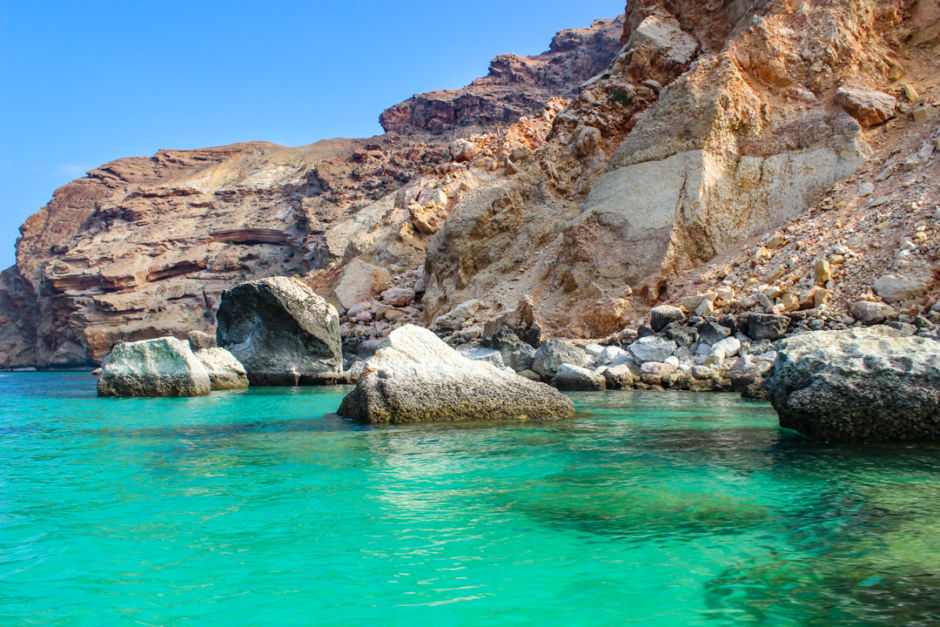 Dhow cruising the rocky lagoons to Shua'ab Beach as bottlenose dolphins jumped and danced along. Corner after corner of fiery orange rock against an emerald sea finally gave way to snow-white sands. The friendly residents of Shua'ab welcomed me to the paradise they call home, offering up freshly caught lobster and a sweet cup of shai.

Tagged
Galleries Yemen
What did you think of this story?
Meh
Good
Awesome

Yemen Is the World’s Worst Humanitarian Crisis, but We Can Help

How To: Travel To Socotra Island, Yemen

Dreaming in Arabic: Learning in Yemen