Two years ago, a deadly 7.8-magnitude earthquake rocked Nepal, killing approximately 9,000 people across the country, including 22 people at Everest Base Camp and three others in the surrounding region. Images of people sifting through the rubble of crumpled buildings and desperately searching for loved ones, remained etched in my mind, as a few friends and I signed up for the challenging 12-day hike from Lukla to Everest Base Camp with G Adventures. Rebuilding the Everest region was a priority for the local government since the Everest Base Camp trek is one of the most popular in Nepal. Within five months, tours were once again operating in the area, but the tourists weren’t showing up.

Two years later, there are more tourists than ever, but memories of the earthquake still haunt many villages, though new homes have been built beside damaged ones and construction continues to take place. 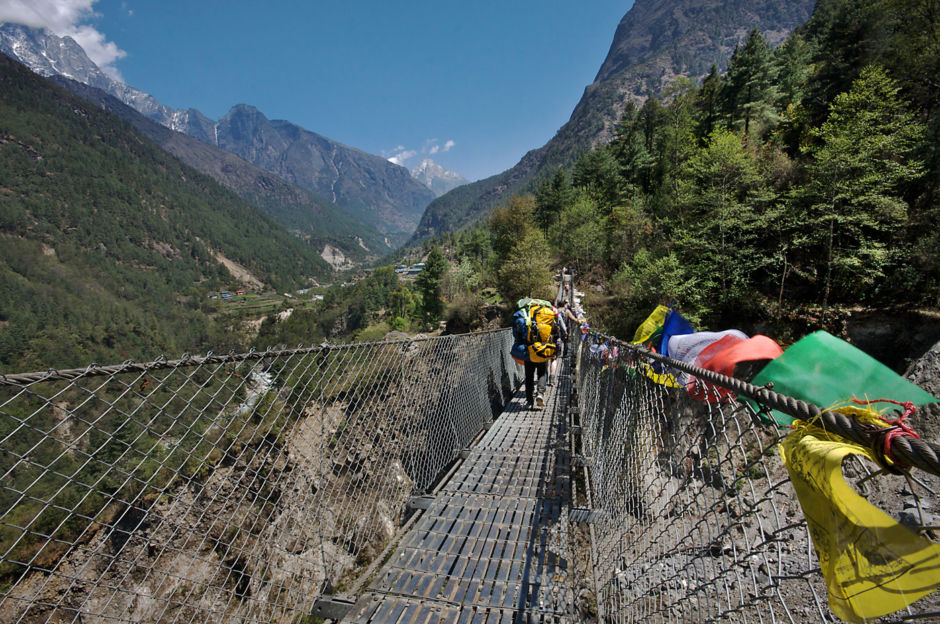 A porter makes his way across one of the many suspension bridges over the Dudh Kosi River near Lukla — the start of the 65-kilometre trek to Everest Base Camp. A strong walker, pre-acclimatized to the altitude, could cover the distance in two or three days, but most bodies — including mine — need time to adapt to the increasingly thin air. 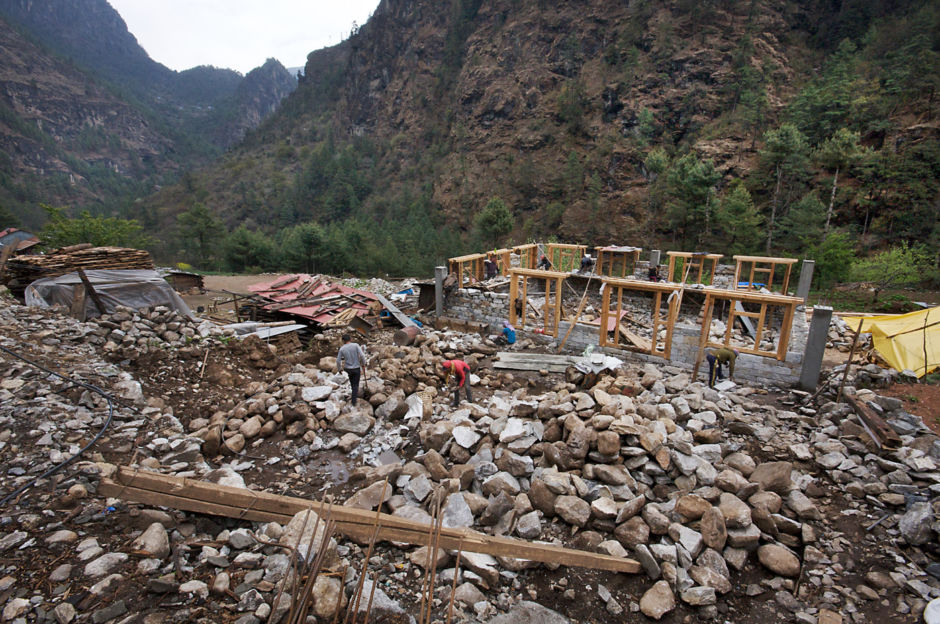 Construction continues to take place in some parts of the Khumbu region, which has transformed dramatically throughout the years thanks to tourism dollars and grants from international relief organizations to fund schools and medical clinics. The April 2015 earthquake left about 45 per cent of the region completely damaged and 25 per cent with minor damage. 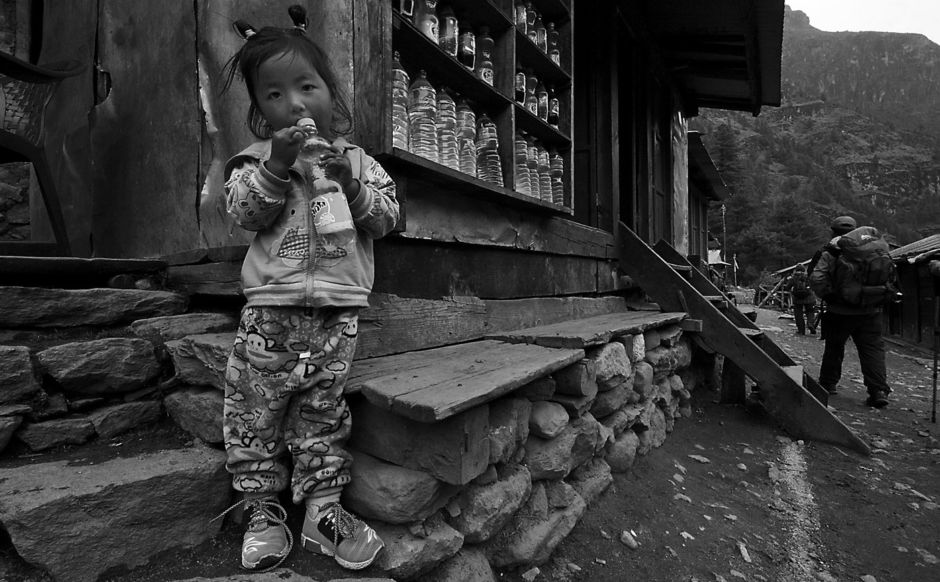 One of the many friendly locals greets the parade of hikers along the busy trail to Everest Base Camp. The first few days are spent passing through sleepy Sherpa villages that consist of a handful of fragile-looking stone homes, small garden plots, guesthouses and the odd shop selling water, snacks and hiking gear. 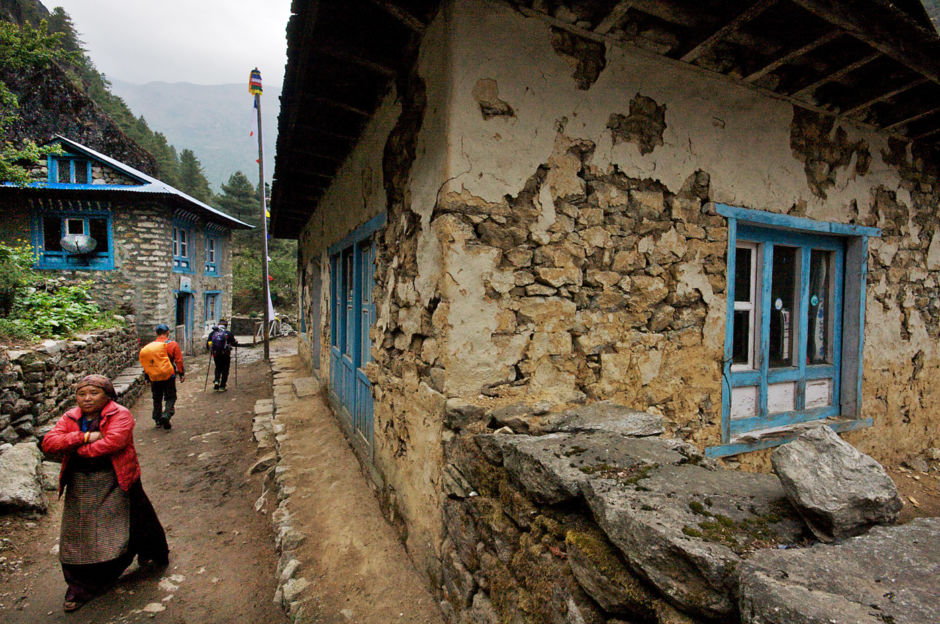 Buildings in some villages in the Khumbu region have more or less endured many years of earthquakes. For the locals, the damaged buildings serve as a reminder of the deadly April 2015 earthquake, but most people want to forget and move on. 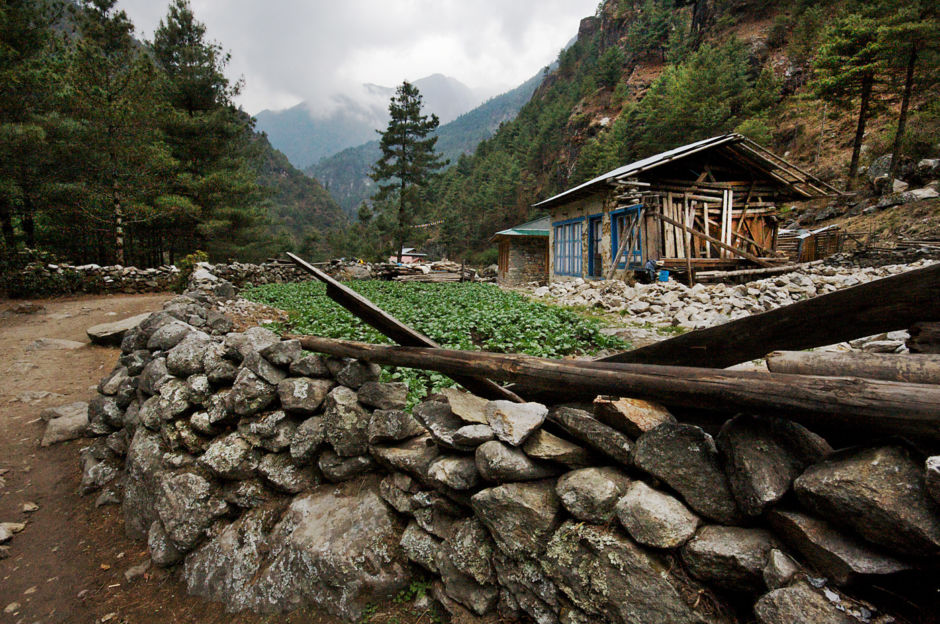 Signs of the April 2015 earthquake are still visible in many villages in the Khumbu region, where new homes have been built beside damaged ones. 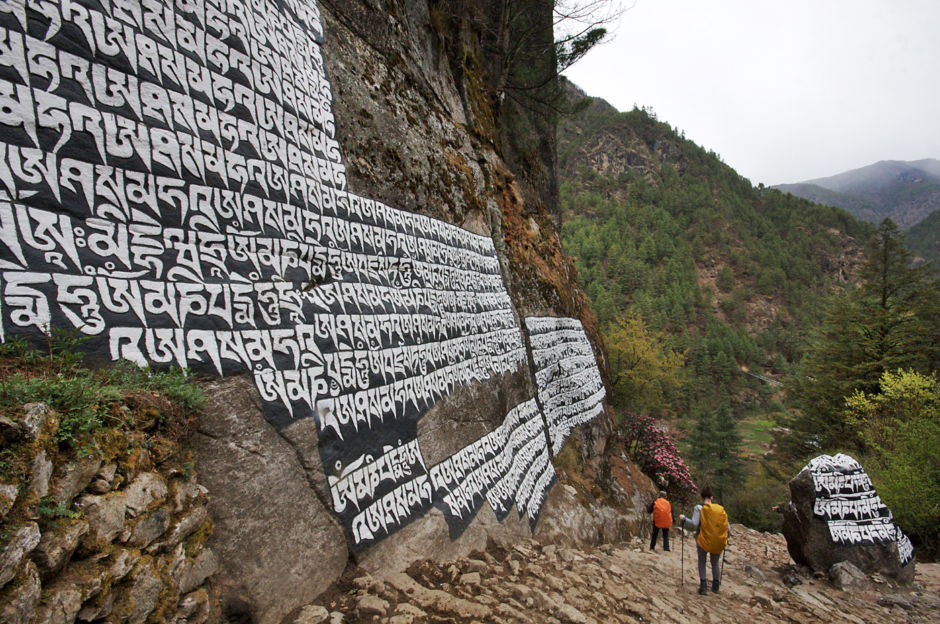 Mani stones, either carved or painted with Buddhist inscriptions, are found along several parts of the trail to Everest Base Camp. The stones are prayer and meditation for Buddhists. 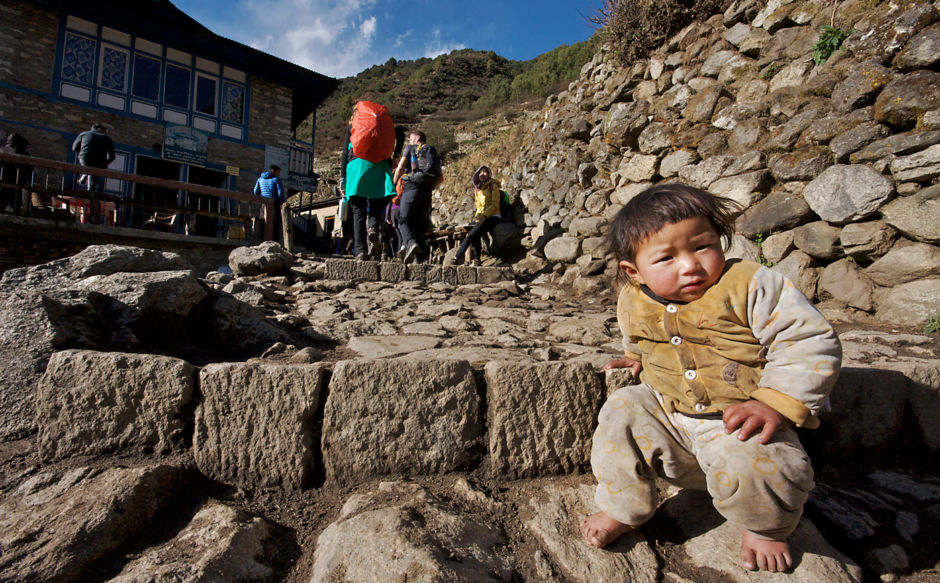 A child greets hikers along the stone steps leading into the bustling town of Namche Bazaar. A historic trading hub with a prosperous market, the town is often used as a staging point for expeditions to Everest and other Himalayan peaks in the area. We spent a day here acclimatizing to the altitude of 3,440 metres. 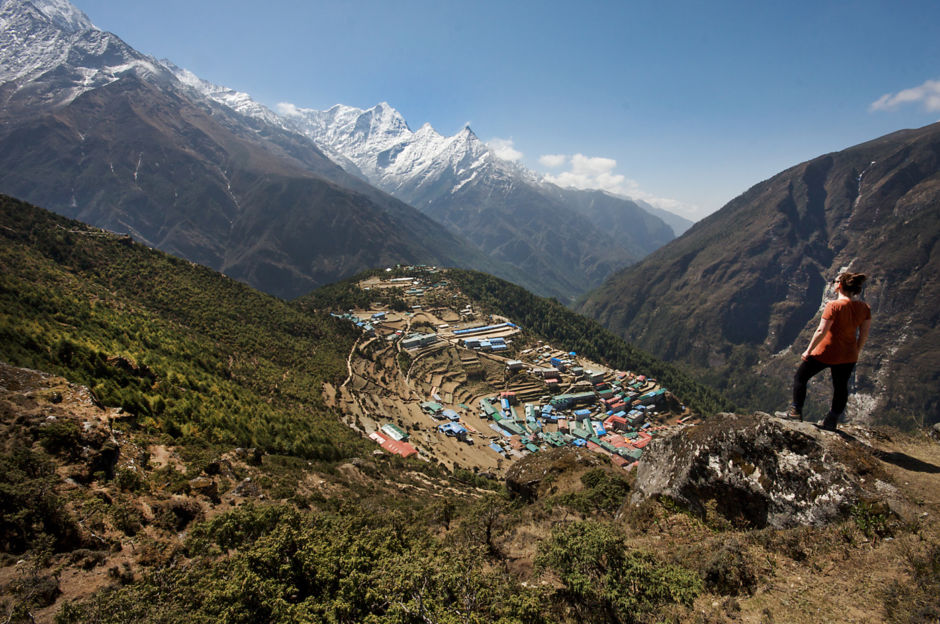 A hiker soaks in the gorgeous views of Namche Bazaar from one of the surrounding hills. The 9 km route from Namche to Tengboche is where we had our first glimpse of Mount Everest’s peak. with a trail of blowing snow. 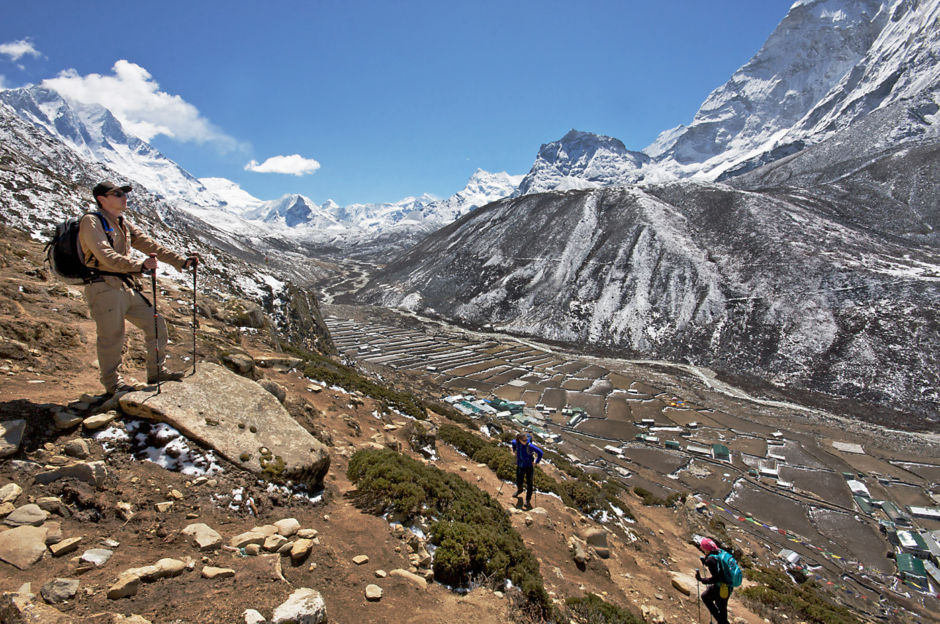 The mountain views surrounding the village of Dingboche are spectacular. After a night in Tengboche, we spent an acclimatization day in Dingboche, where we hiked up to a small summer settlement that offered views of Island Peak, Lhotse, Ama Dablam and the fluted ice walls flanking the Amphu Lapcha pass 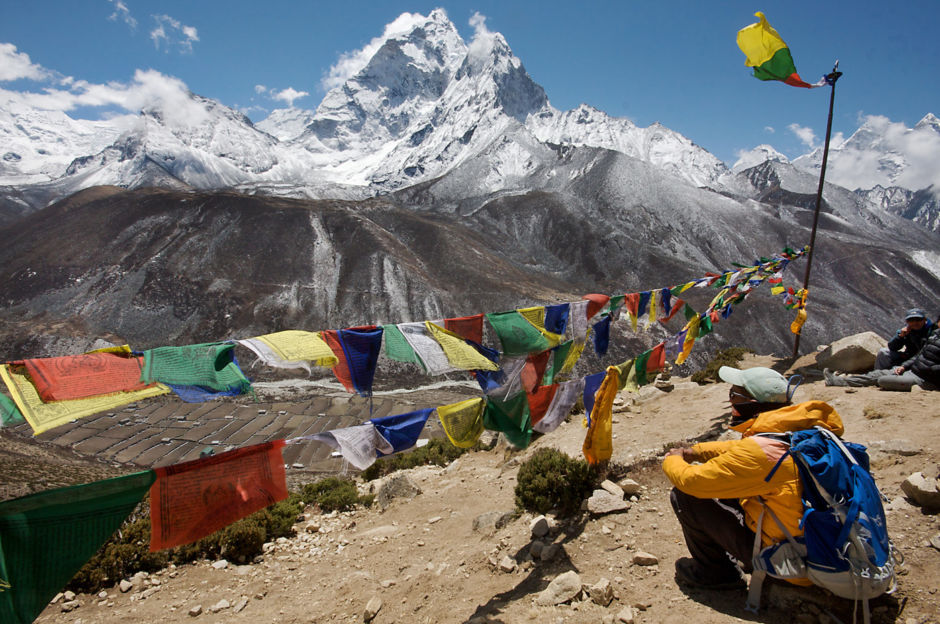 A porter takes in the incredible views of Ama Dablam from a ridge overlooking the village of Dingboche. Here the scenery transforms from dwarf birch, blue pine and rhododendron forests along the Dudh Kosi River into a world of alpine meadows dotted with giant boulders, and summer yak pastures surrounded by snow-capped mountain peaks. 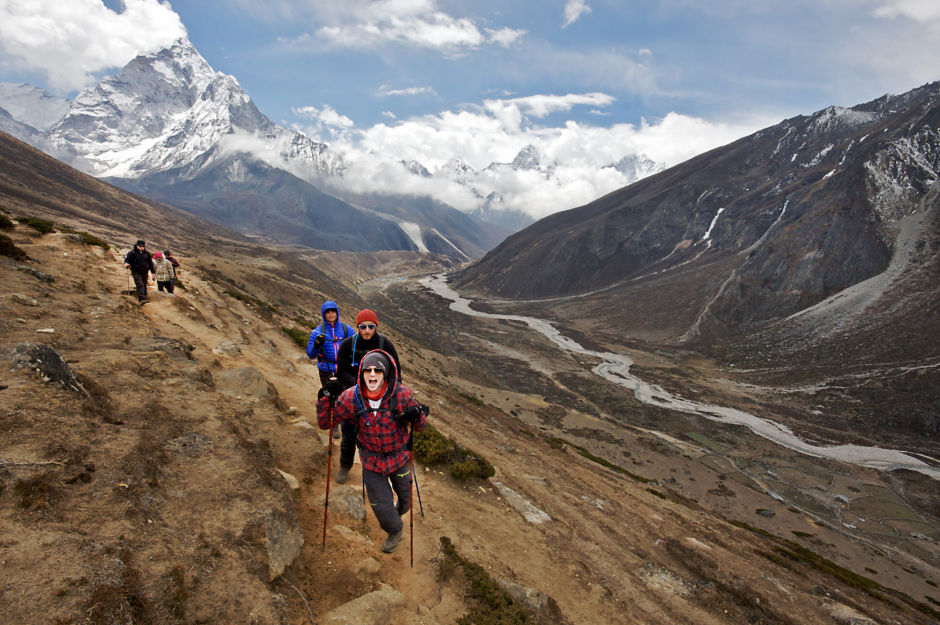 My sense of adventure kicks into overdrive the further we venture into the remote, high-altitude areas. It feels like I’m walking through a painting during the two days it takes to reach Everest Base Camp from Dingboche. 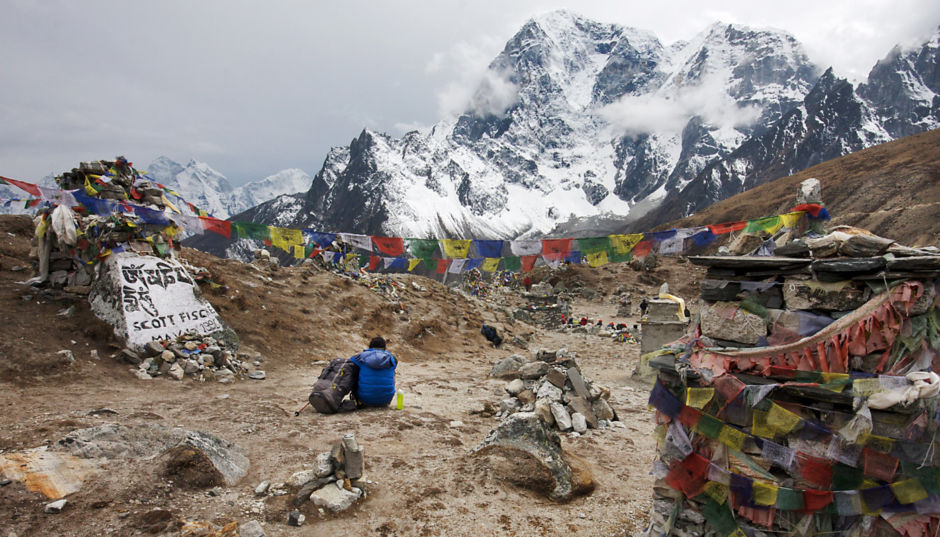 A hiker takes a moment to pay their respects to one of the stone memorials outside Dingboche, for those who’ve died while climbing Mount Everest. 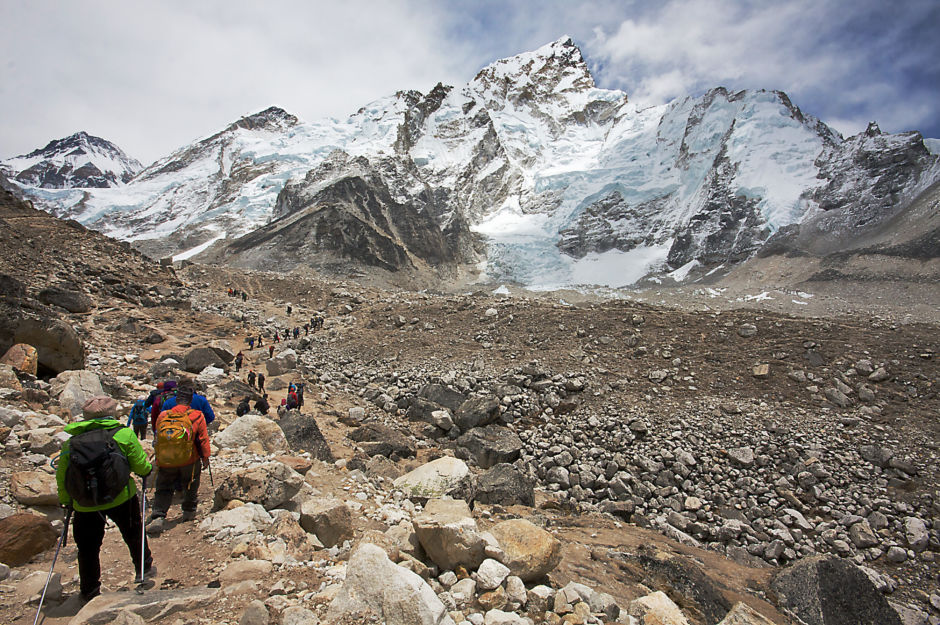 In early May, the dusty trail is packed with international hikers, hardy porters carrying giant loads, caravans of mules and yaks with jingling bells around their necks, and locals going about their daily routine, as helicopters continuously buzz overhead. 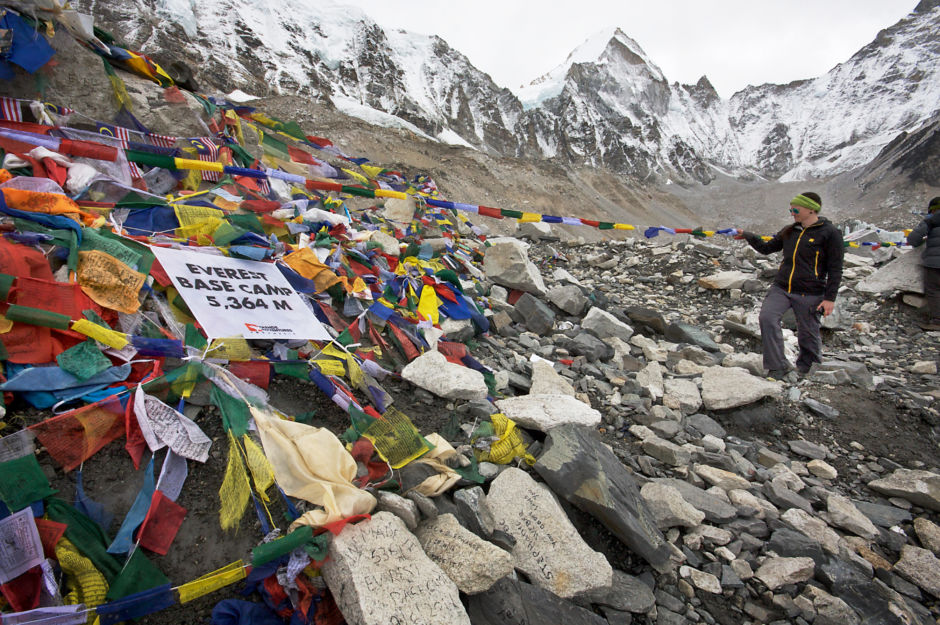 After eight days of slow and steady hiking to an altitude of 5,300 metres (17,500 feet), that often leaves me light-headed and breathless, I’m filled with tremendous excitement, disbelief and relief as we head into Everest Base Camp. Here my friend Megan Long takes a few minutes to hang a prayer flag which had been blessed a few days earlier by a monk in Tengboche. 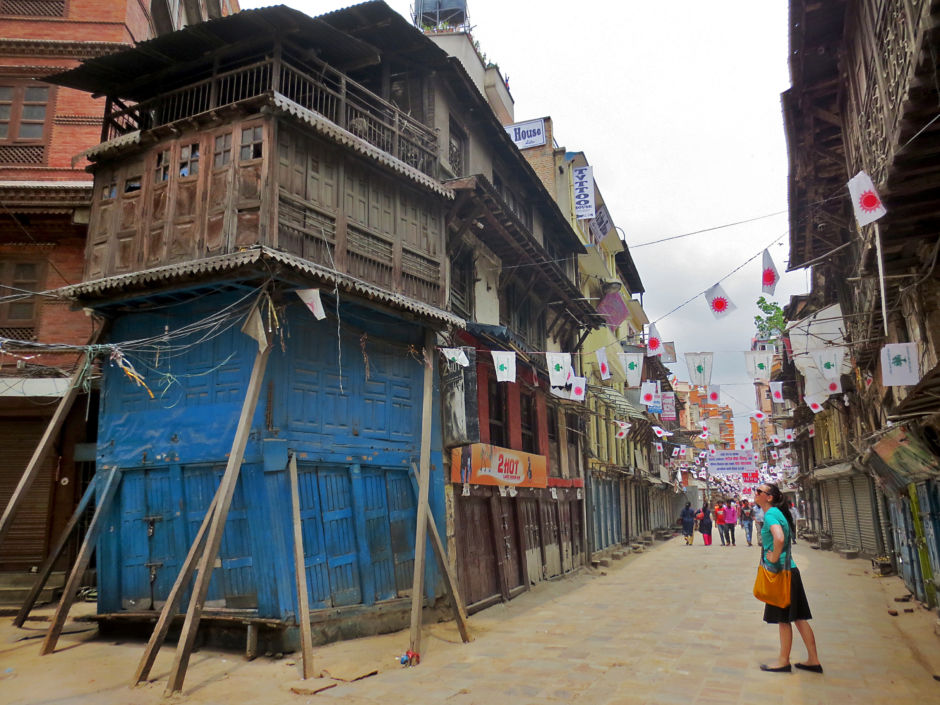 Back in the hot, dusty streets of Kathmandu, I walk past large wooden beams supporting several old, bulging buildings that look like they’ll crumble with another violent shake. Some buildings near the historic Durbar Square still lie in a pile of rubble. 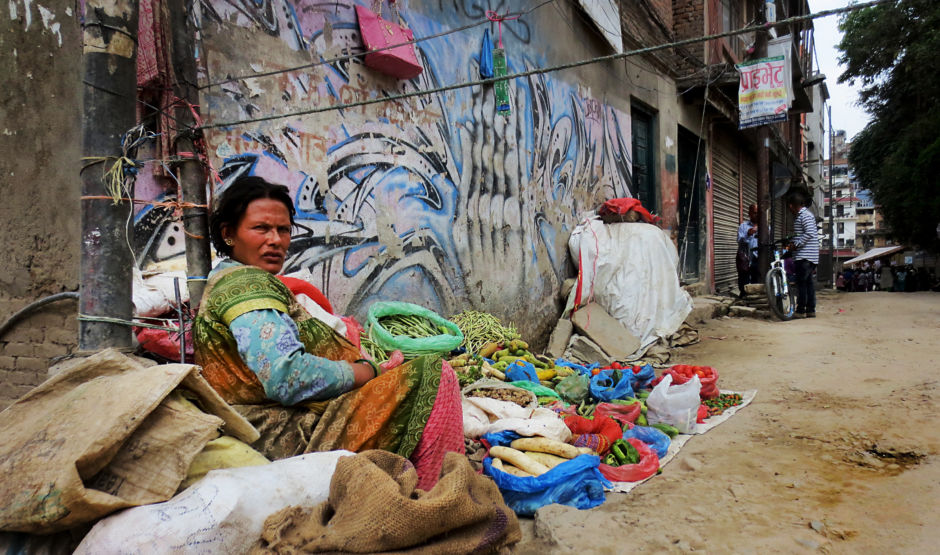 The hardships of rising from a natural disaster are etched upon many of the people’s faces in Kathmandu. 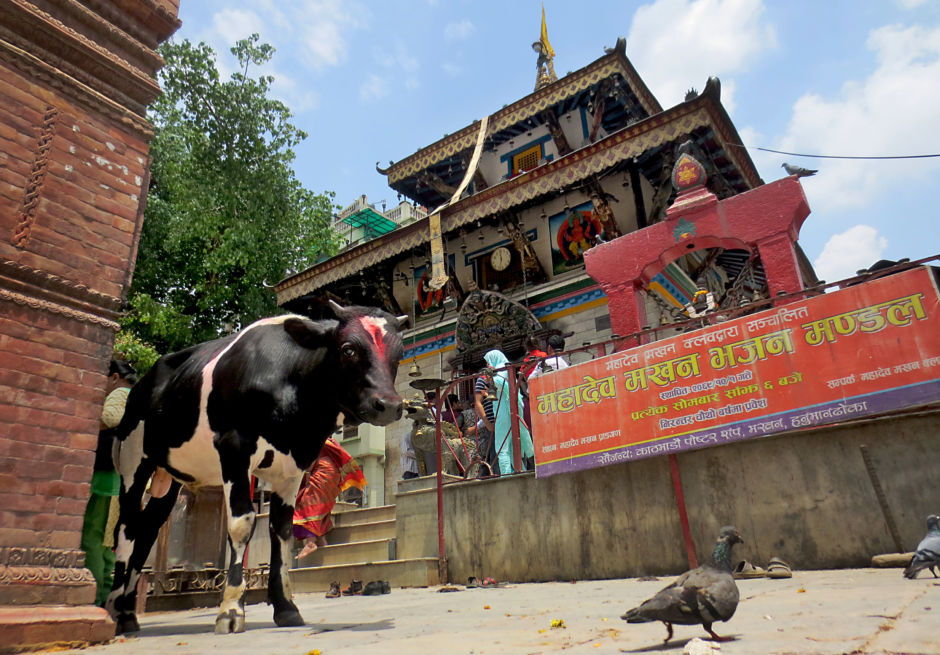 A cow stands outside a Hindu temple near Kathmandu’s historic Durbar Square. Coming to Nepal and trekking to Everest Base Camp isn’t just a hike through the highest mountains in the world; it’s a spiritual journey through another culture, a people who define resilience.

Tagged
Galleries Nepal
What did you think of this story?
Meh
Good
Awesome