SOMEONE ON THE TRAIN from Annecy in France asked me where I was heading. “Vercelli?” he said with a sense of disbelief. “Why would anyone go there? All you’ll find is rice fields.”

“Uh,” I replied, not entirely sure and on the defensive, “apparently it’s beautiful. And I’ll be spending most of my time in the Alps. In a small town called Alagna.” He looked at me with a mixture of disgust and pity. “Forget the sleepy villages,” he said. “You should come to my town. Rimini. You’ll find much better party there.” It’s not a party I’m looking for, I wanted to respond. Instead, I smiled and turned to look at the scenery slipping past the window.

The truth was I actually had very little idea what to expect in this remote region of Italy. A cursory Google search a few days prior had told me Alagna was a commune in the Valsesia alpine valley. I’d need to take a train to a town called Vercelli, then board a local bus that would travel to the very end of the road, at the final reaches of the valley. The road ended in Alagna, and after that, the only thing separating Italy from Switzerland was the massive and picturesque Monte Rosa. 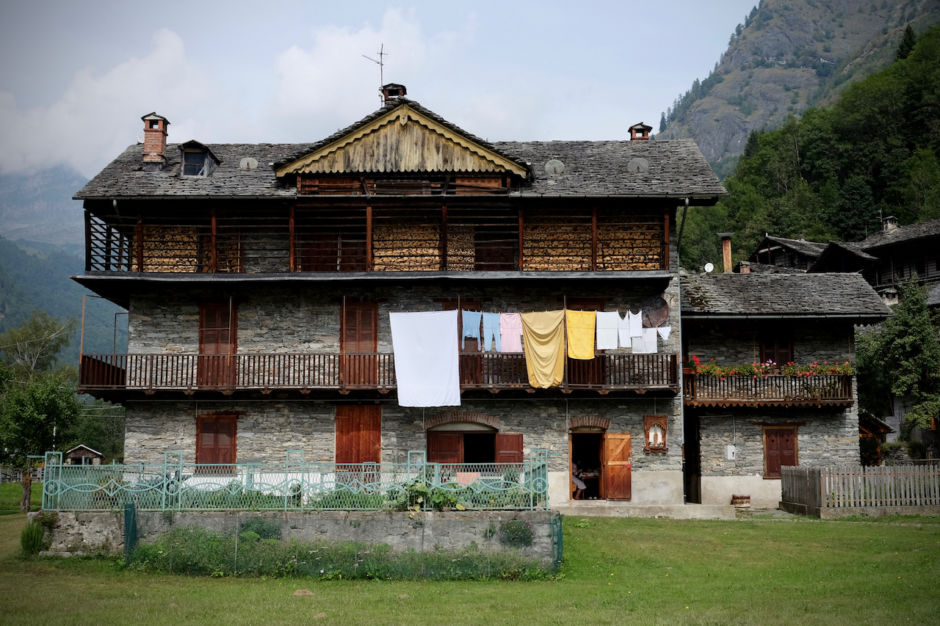 Aside from rushing water and the occasional early morning chirp from the concealed alpine birdlife, there was little noise on the far side of the river. The large multi-story Walser houses fascinated me, and I tiptoed towards one in particular that caught my attention. It was a picture-perfect scene. Stone walls, a steep pitched roof, hanging laundry, and neatly stacked wood piles on the top floor completed the picture. It was only when I ventured too close that the woman sitting in the darkened entrance cleared her throat and mumbled something in my direction, and I realized I may have been intruding. 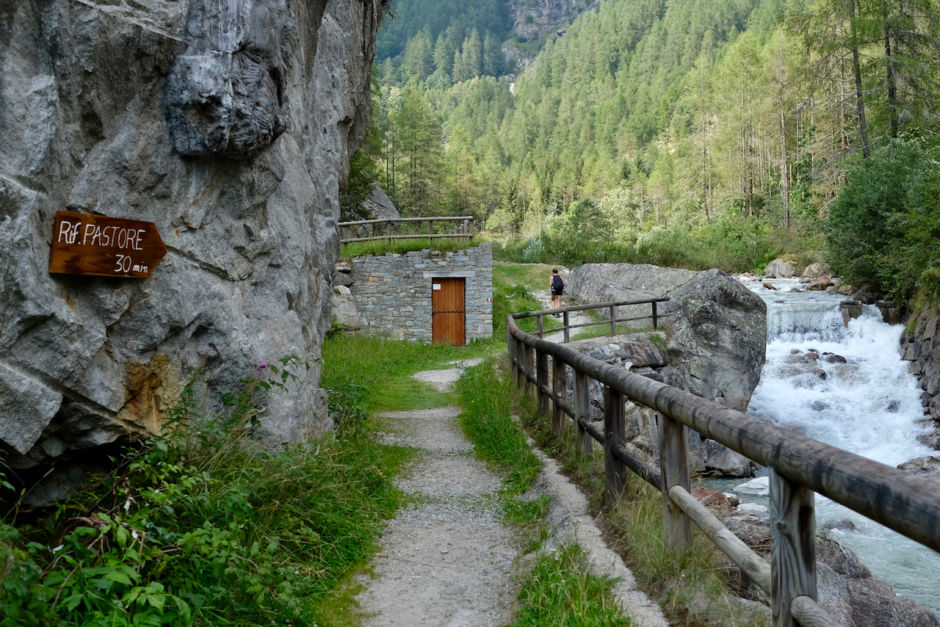 There are endless easy walks in and around Alagna. Many of them, like this one, follow the cool river running down from the Alps. Every now and again the river dams up ever so slightly, making for perfect secluded swimming spots to help cool off from the late afternoon sun. 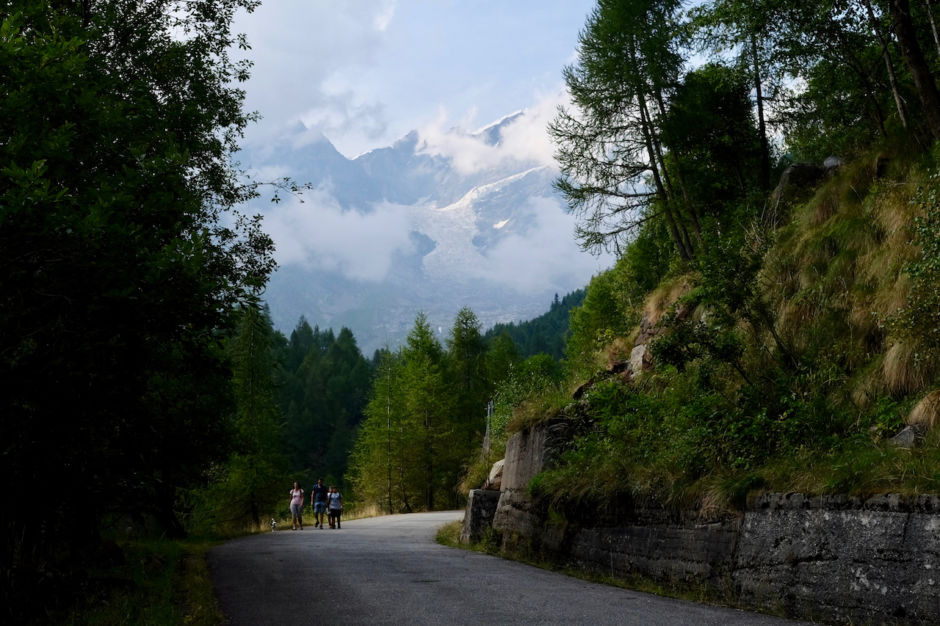 In the shadow of Monte Rosa

Monte Rosa is a large mountain that straddles Switzerland and Italy in the Pennine Alps. Though getting to the top of this huge 15,000-foot ice-covered peak is for experts only, Alagna Valsesia is one of the closest settlements. In the winter, you can ski on the slopes surrounding the mountain, but summer’s also good for endless walks, and when the clouds clear they take in the incredible view of this legendary mountain. 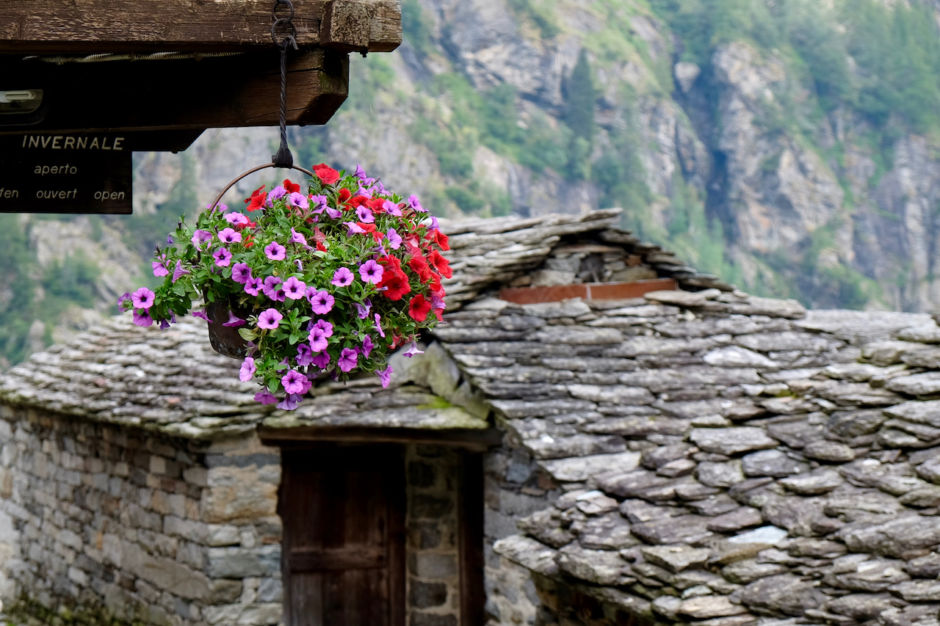 The Walser originated in the uppermost reaches of the Rhône valley. They spread out south, east and west between the 12th and 13th centuries. Today they inhabit a few small regions of the Alps in Liechtenstein, Switzerland, Austria, and Italy, and Alagna Valsesia is one of the best places in which to explore a traditional homestead and learn more about their culture. 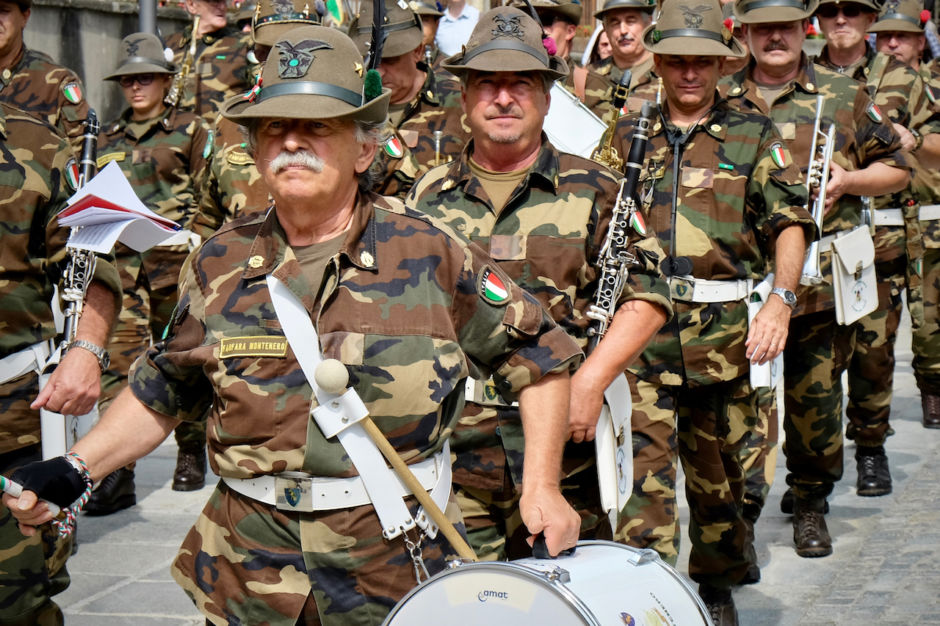 Late one evening I sat in on a performance by a Walser choir in the local church. Though the male singers had somewhat rough appearances — some of them could easily double as lumberjacks during daylight hours — their voices hit angelic notes that brought tears to my eyes, and rapturous applause from most observers. Early the next morning, I stumbled into the band marching through the streets of the town and had to jump to the sidewalk to avoid being overrun. 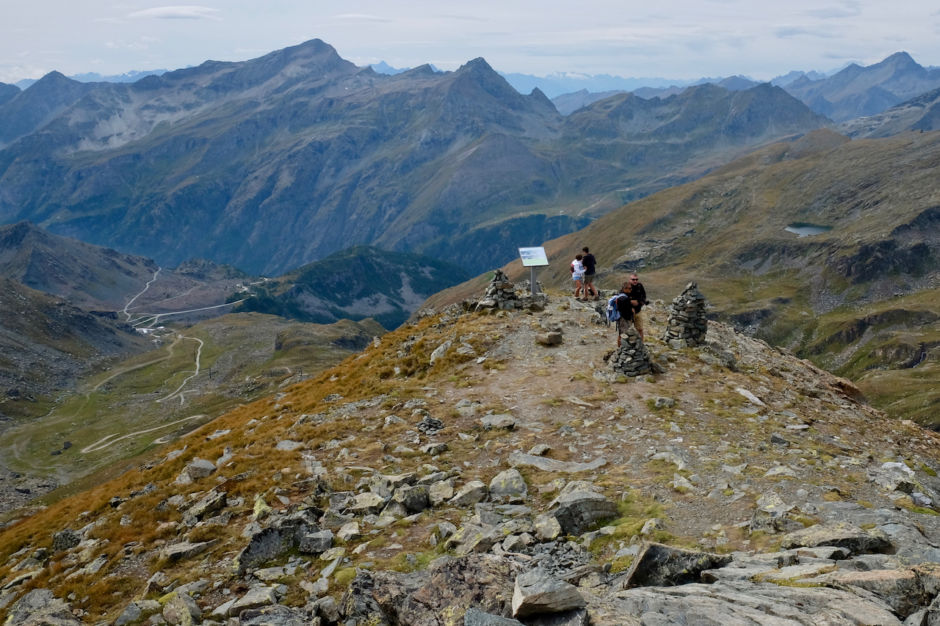 Cable car to the clouds

During winter, the cable car that leads up from Alagna will take you to the epicenter of what’s called Freeride Paradise. In summer, it’s a scenic trip above traditional houses, pristine valleys, and to the summit of this small peak, that on a clear day offers panoramic views into Switzerland. 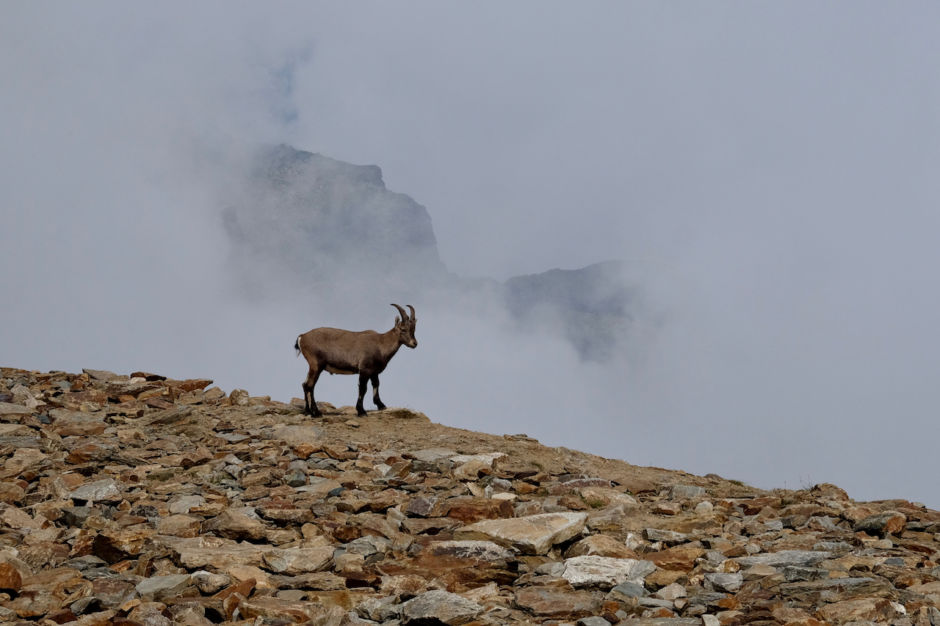 As I returned to the cable car after a walk around the summit of the nearby peak, I noticed a mountain goat appearing from around the corner. He tiptoed on the loose rock precariously close to the cliff edge. I stopped in my tracks and we made brief eye contact, which was enough to encourage him to retreat back to where he came from — which was a near-sheer slope away from the prying eyes of tourists. 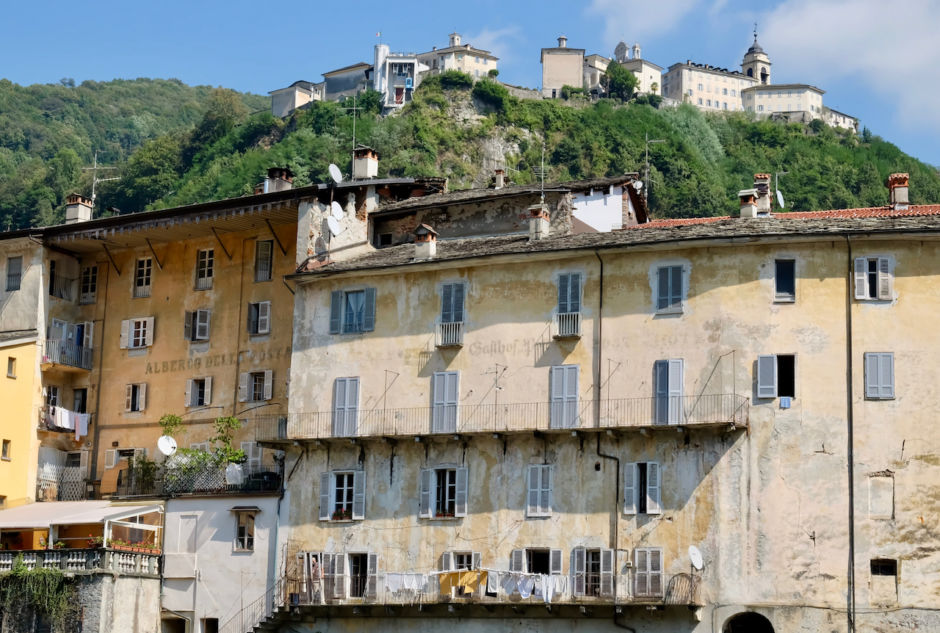 The local tourism authority insisted that I visit a nearby town called Varallo. Home to just 7,400 people, this place is anything but lively. But there’s a unique small-town charm in the village. The collection of chapel-like enclosures on the Sacred Mountain of Varallo above is one of the most famous pilgrimage sites in this remote part of northwest Italy. 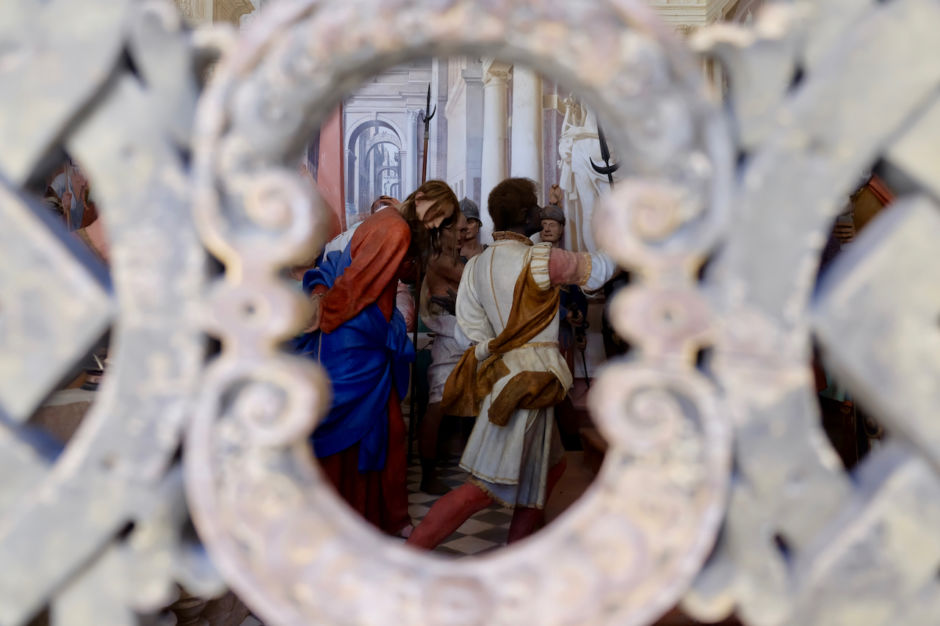 There are 45 chapels on this mountaintop, and there are small viewing holes in many that tell Christian stories through the ages. Though peering through these holes is slightly unnerving, it provides a fascinating insight into the religious history of the region. 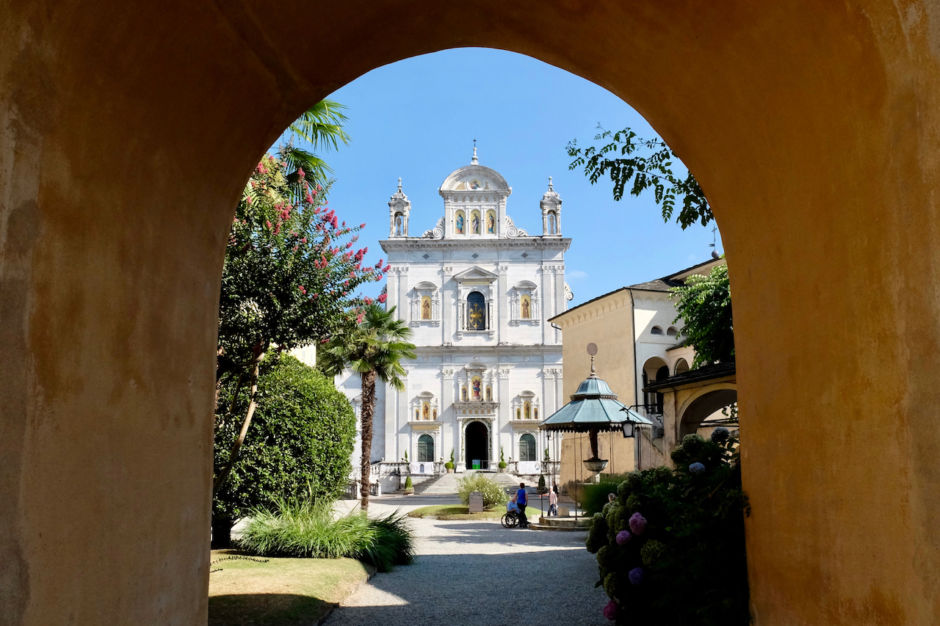 The minor basilica is the focal point of the heritage site on the mountain. Set amongst the gardens and multiple chapels, it has a surreal, almost movie-set feel to it.

Eventually, it came time to leave the valley. Fall was starting to take hold, and there was a hush that fell over the town of Alagna as it prepared for the more popular winter season. The man on the train had been partially right — this was a sleepy town free from foreign tourists and an overwhelming nightlife. But what he didn’t know is that it’s packed full of natural beauty, historical charm, and welcoming locals, which makes this small Italian Alpine village a remarkable place to visit.