First-time visitors to South Africa may not realize just how unequal the country truly is. The legacy of apartheid, and the vast and growing discrepancy between the rich and poor might not be instantly recognizable at ground level, but air photographs can tell a more comprehensive story.

Until recently, airports may have been the only time visitors could get a true sense of South Africa’s divide between rich and poor. The country’s international airports are slick, efficient and much like many you’d encounter around the world. But they’re typically located on the outskirts of cities, on cheap land not far from some of the country’s so-called townships. This was where the apartheid government forced thousands of black people to live, saving the more convenient, arable and expensive land for white citizens. If you look carefully enough on approach to these airports, though, you may just spot the densely packed houses below.

Soon after arrival, it’s easy to forget these glimpses of reality. In many cases, government and city-backed housing projects have sought to create corridors of simple but attractive low-cost houses along the main roads into the hearts of bustling cities. To the uninitiated, the low-cost houses may look like they are making inroads into the country’s housing and inequality crisis. But to others, they are a thinly veiled attempt to lessen the impact of the true poverty that the country’s struggling to come to grips with.

Most of the time, poverty is closer than many wealthy residents realize, or choose to acknowledge. Much of South Africa’s workforce still has to travel many kilometers on costly, unsafe and inefficient public transport in order to reach work in the cities. As a result, many have created basic or temporary homes for themselves on the fringes of urban societies — often just a few meters away from the continent’s most impressive buildings, on disused city blocks, across divisive green belts, or on the other side of roads and highways.

Photographer Johnny Miller has spent several months documenting these scenes from above. Together with AfricanDrone, they’ve mapped out some of the country’s starkest reminders of inequality in an ongoing project titled Unequal Scenes.

All images by Johnny Miller / AfrcanDrone.org 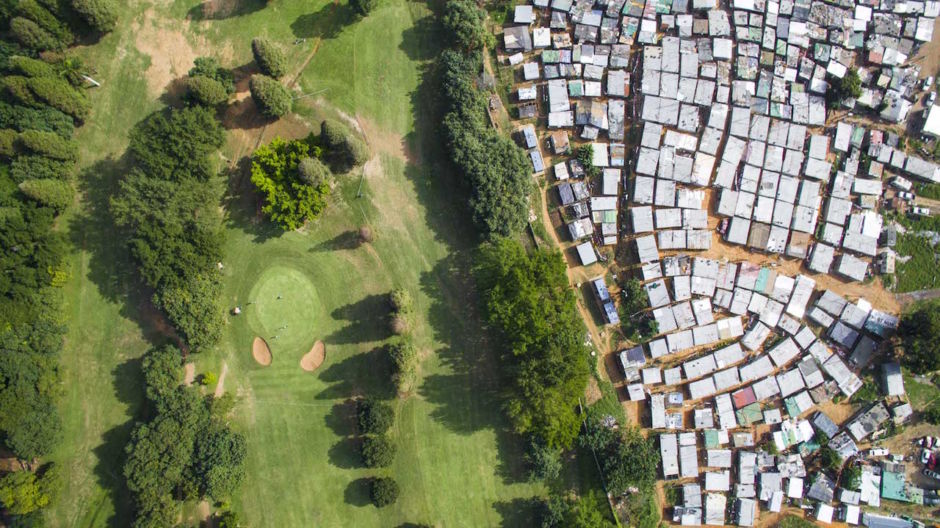 There are few uses of land that display wealth more flagrantly than golf courses, and yet in South Africa, they are often located surprisingly close to informal settlements. A thin concrete wall and a row of planted trees hide a dense collection of shacks from golfers walking the manicured greens and fairways of Durban’s lush Papwa Sewgolum Golf Course. 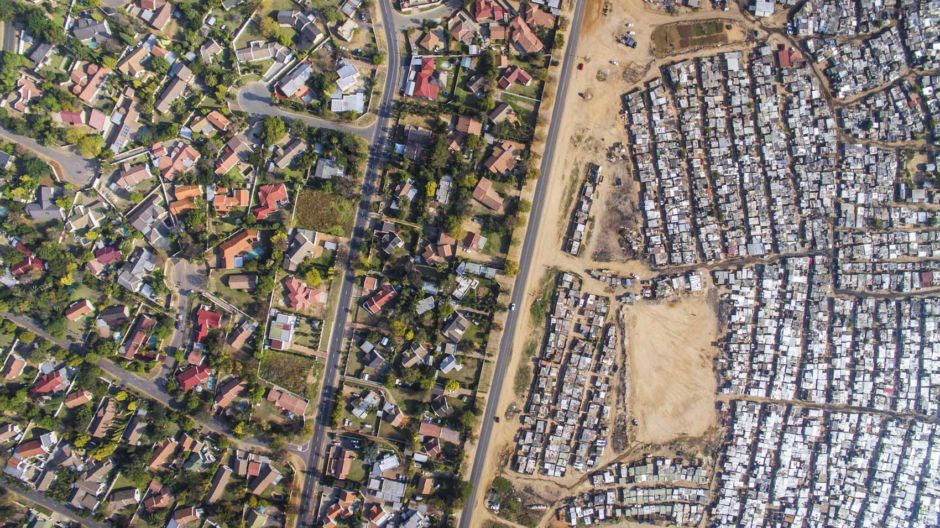 Kya Sands is a growing informal settlement on the outskirts of Johannesburg that has faced many setbacks and hardships over the years. It’s been a hotbed for xenophobic violence, devastating fires, and on the receiving end of promises about formalizing housing in the area. Just across the road from the informal settlements is the middle-class suburb of Bloubosrand, where it’s common to find houses selling for over one million rands (approximately USD$80k). 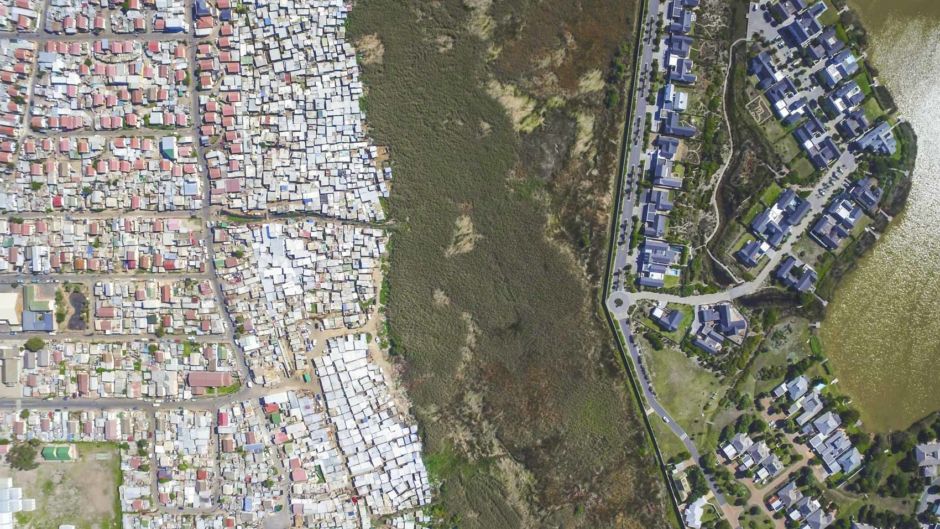 Lake Michelle is an exclusive housing estate located in the tranquil and picturesque Southern Cape Peninsula. The estate is surrounded by electric fences and has a 24-hour security guard presence on the premises. The houses on this lake-side suburb sell for several million rands. And yet just across a thick green belt is the community of Masiphumelele — home to 38,000 people who live in small, modest houses and tin shacks. 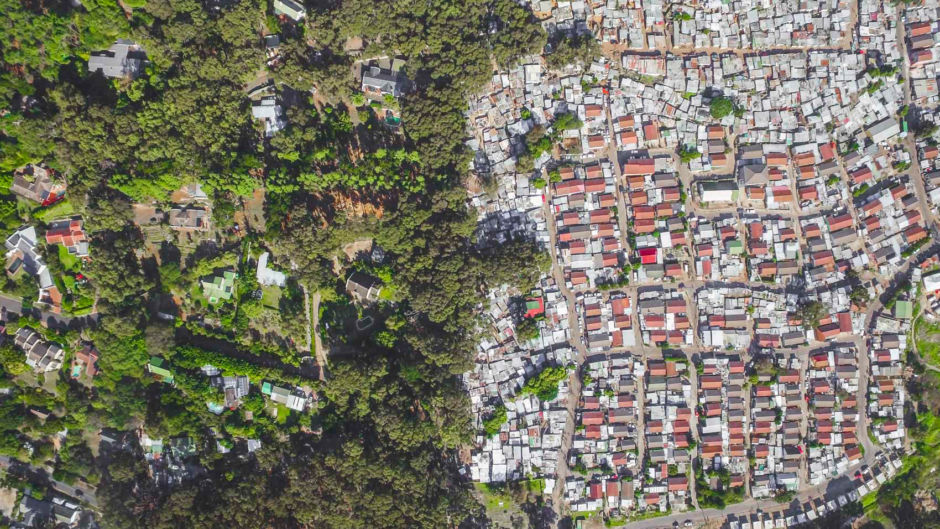 Imizamo Yethu is a dense suburb approximately 15 kilometers from Cape Town consisting of both low-cost housing and an informal settlement with tin shacks. It’s home to some 16,000 people who fit their shelters on every inch of available land. Behind several rows of lush green trees is the lush, wealthy suburb of Hout Bay, which occupies significantly more land and is home to roughly the same population. 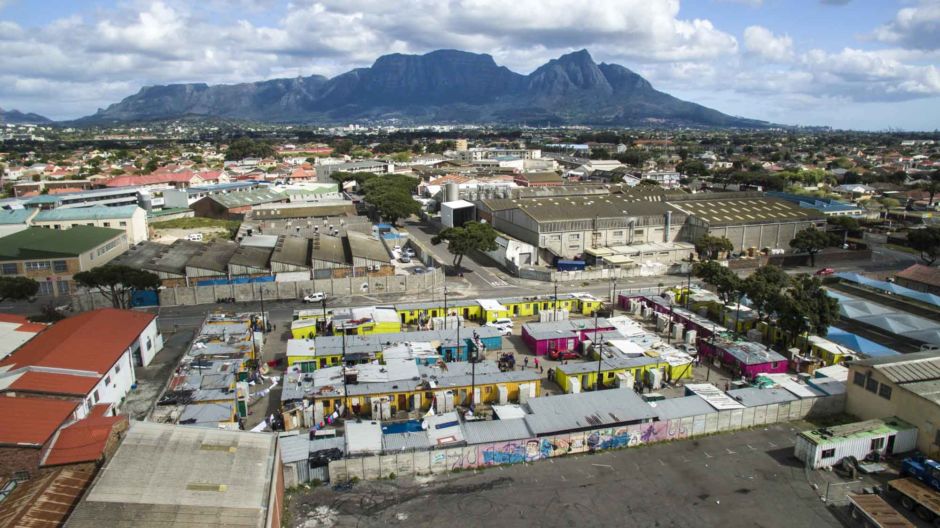 Oftentimes residents in South Africa’s urban centers seek to make their homes as close to work or income generating activities as possible. In these cases, vacant city blocks or disused buildings are turned into low-cost or informal housing — with or without the blessing of the local city councils. 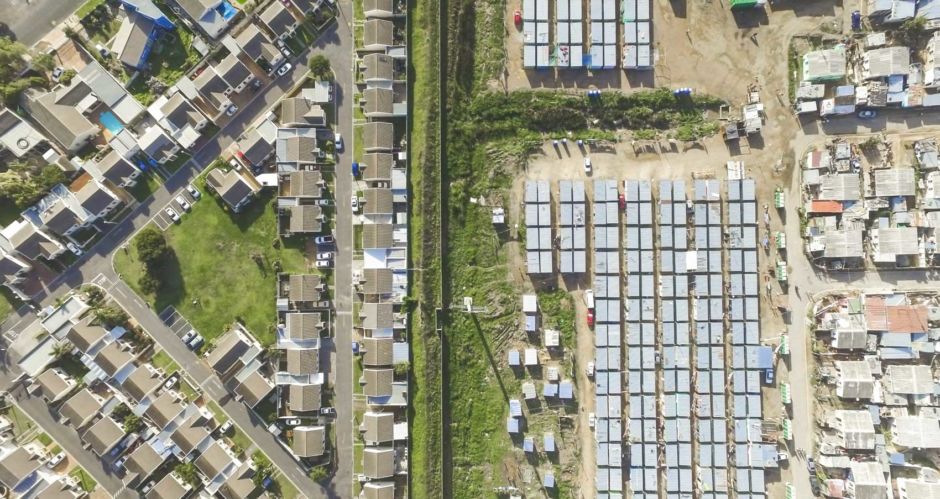 The townships of Nomzamo and Lwandle were conceived in the 1960s to house single male workers, mostly migrants from the Eastern Cape. They worked in the nearby wine and fruit farms and served as a critical backbone of the burgeoning Cape economy. This township, which borders on the wealthy suburb of Strand, still exists to this day, with just a very clear green belt to serve as a buffer between the two.

Tagged
South Africa
What did you think of this story?
Meh
Good
Awesome

May 7, 2021 Jeniffer Chiat
✖
travelstoke
Download the mobile app
stoked by