Palestinians are not real — according to some people. Their identity is a forgery dreamed up purely as a political maneuver to undermine Israel’s right to exist. Although the number of people who call themselves “Palestinian” are over four million, trying to find their home will leave you scanning through image after image of the eastern edge of the Mediterranean, tracing a variety of dotted, dashed and solid lines that show up in as many colors as there are meanings behind them.

While Israel is only a tiny sliver at the edge of the Arab world, Palestine is the smaller “nowhere” that exists in between and among its convoluted borders. Palestine is not real in any post-Hiroshima-international-community definition of real, but you can still visit. — unless you have posted support for the Boycott Divestment and Sanctions movement, in which case there is a travel ban against you in effect in Israel, and you will have to enter via Jordan.

I visited Palestine several times in the summer of 2016 after learning about it mainly from Jewish Israelis, and historians raised in the West. 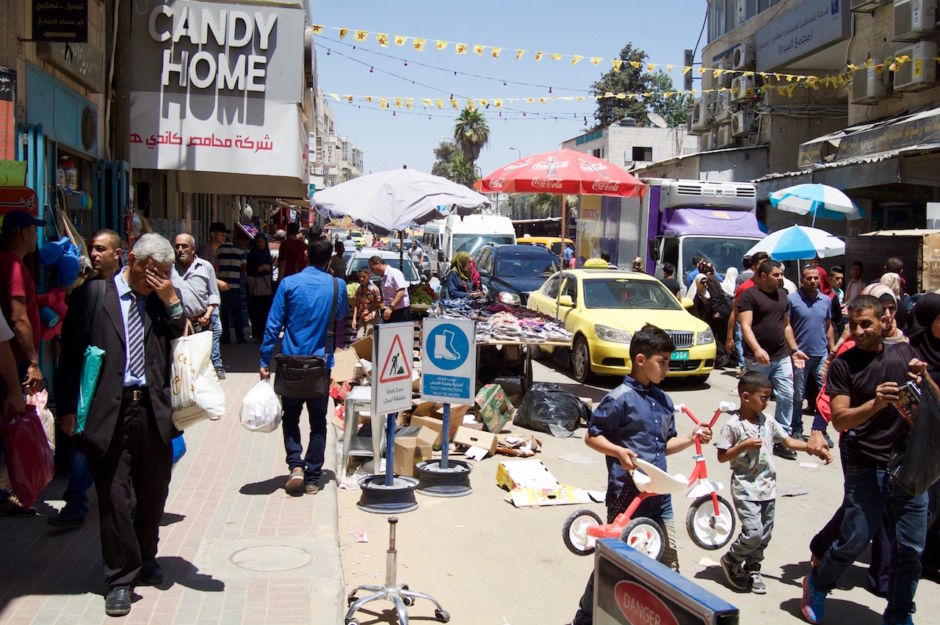 Ramallah became the de facto political capital for Palestinians following 1967’s Six Day War. As a result, the once-tiny Arab Christian town has become a cosmopolitan city with luxury apartments, a small yet diverse nightlife, and a flood of shoppers that visit the city of fewer than 30,000 residents every day. The one feature that sets it apart from the much larger nearby metropolises of Jerusalem and Tel Aviv is the presence of children. Within the community that has little interest in alcohol, large families spend their free time meandering between the outlet malls, toy and candy shops that light up the street well past midnight. 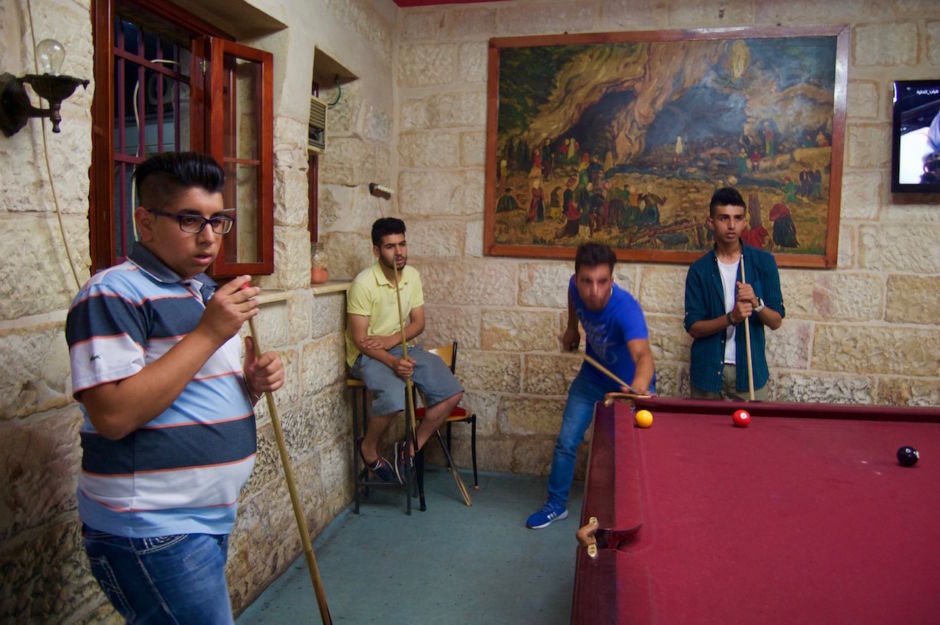 I spent much of my time in the Holy Land investigating the billiard rooms and their respective pool sharks -- from Tel Aviv to Tiberias, Ramallah to Nablus, I must have played on at least a dozen tables. I can tell you that in Tel Aviv you are likely to find a beat-up table with broken cues and a line of drunk players who are light on the rules of the game, but can shoot straighter than Minnesota Fats. At this smoky billiards hall in Ramallah, every table was immaculate and pool players, both young and old, had a real appreciation for the style of the game -- even if they struggled to sink the 8-ball in under thirty minutes. 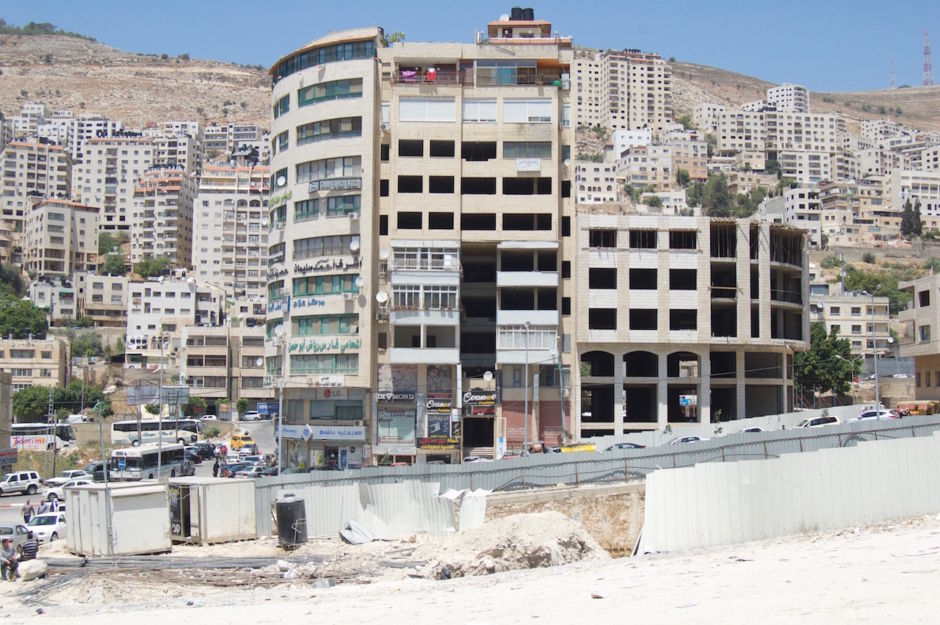 The West Bank exists in a bizarre real estate universe where the land has an extremely high (financial and religious) value, but very few young Palestinians have enough money to afford an apartment of their own. On top of that, water rights are fiercely debated between the Palestinian Authority and the Israeli water company Mekorot that controls many of the wells, meaning that a brand-new city like Rawabi will be entirely vacant (even with interested renters) because it has no access to water. The result is massive amounts of real estate being built across the entire West Bank that go unoccupied for years, like these structures in Nablus, which may eventually be torn down without ever having a single resident. 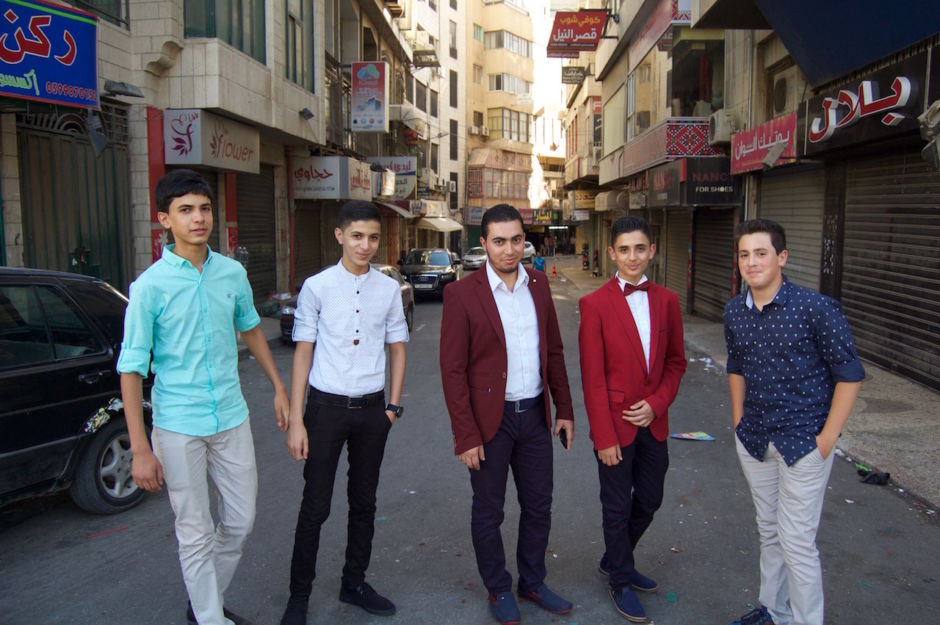 The end of the Ramadan, when observing Muslims fast for a month, is marked by the weekend-long holiday Eid al-Fatir. For two days, West Bank streets erupt in color as every Muslim celebrates and shows off their new styles. As drinking alcohol is against the rules of Islam, many celebrate by eating sweetened dates, kofta kebabs and tahini-based halva, and by going on shopping sprees with an entourage of their family and closest friends. These five boys strutting their stuff in downtown Nablus display the very best of Palestinian Eid fashion. 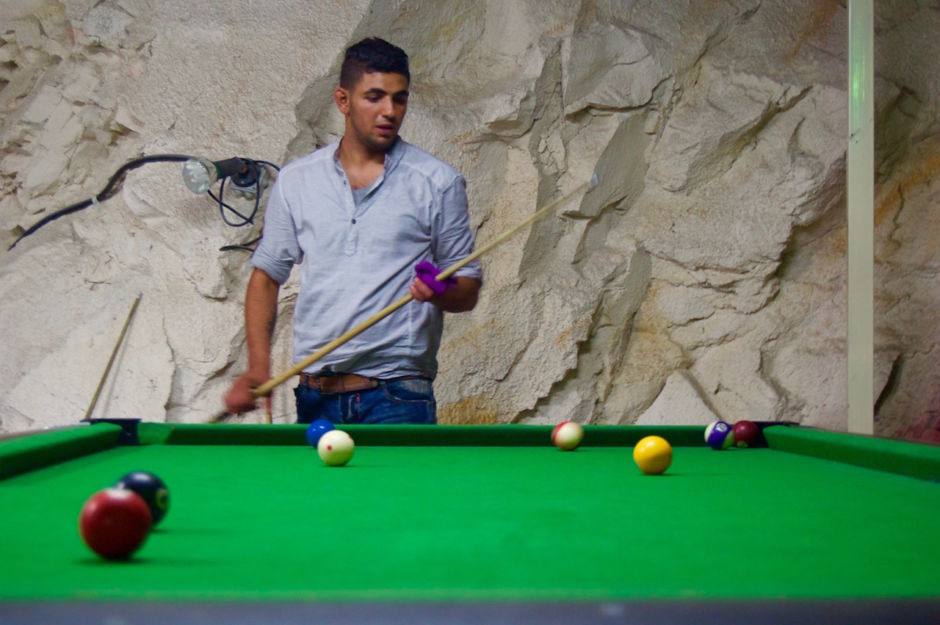 A young man I bumped into on Martyr’s Square in the valley-nestled city of Nablus, decided to show me a local secret: a pool hall located in a cave at the edge of a cliff a few hundred feet above the city. No bar, no hookah pipes, no food, no music: the sole signs of human presence were four perfectly balanced tables cleaner than a rug in an Ottoman palace -- it was a shrine meant for worshipping the pure geometry of billiards. The wayward minibus left Nablus for Jericho and made an extended stop in front of a rundown apartment tower near the southern crest of the Nablus valley. A man was selling cotton candy out of a beat-up car with the recognizable ice cream truck song playing through a loudspeaker. Driving across the West Bank can be disheartening in the summer -- though a parched landscape torn up by conflict and a moveable wall that reflects the international community’s ephemeral attachment to modern concepts like sovereignty and human rights, can also reveal handsome villages perched atop rolling hillsides. 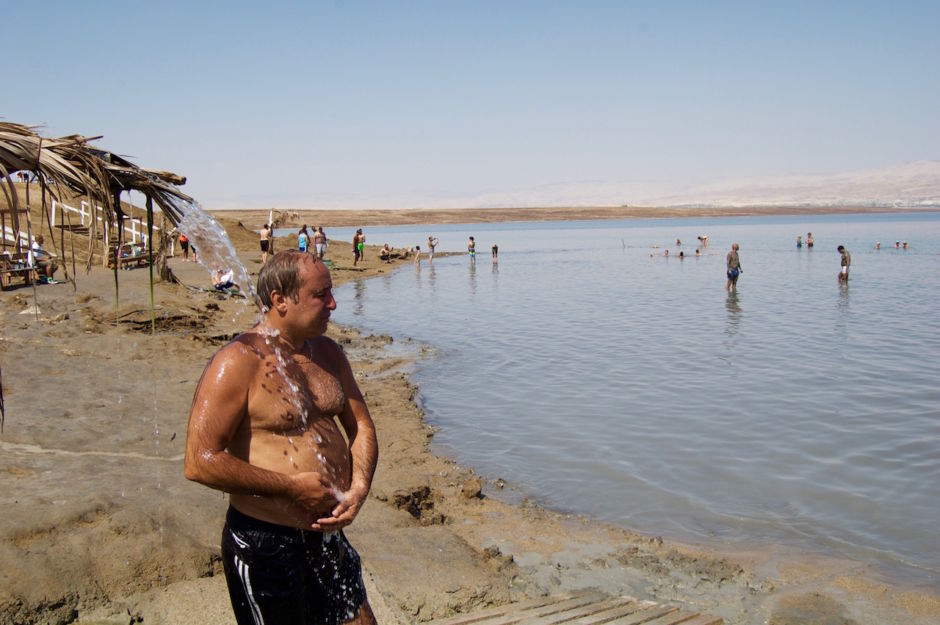 A man rinses the mineral-rich mud off his belly after taking a dip in the Dead Sea. Behind me is the self-designated Lowest Bar in The World and hidden in the distance is the Allenby Bridge, the West Bank’s gateway into Jordan and the rest of the Arab world. Unseen on the left is the 11,000-year-old Biblical city of Jericho, governed by the Palestinian Authority since the first Oslo Accords in 1994. Jericho is thought to be the oldest inhabited city in the world since the discovery of a circumferential wall that guarded its earliest inhabitants, but this doesn’t seem to be of much interest to the Israelis and Palestinians I spoke to, who told me it was too hot, too boring and too laid back. One local cab driver described his hometown as the only part of Palestine that Israel didn’t want. Not a bad vacation spot if you are an archaeologist, however. 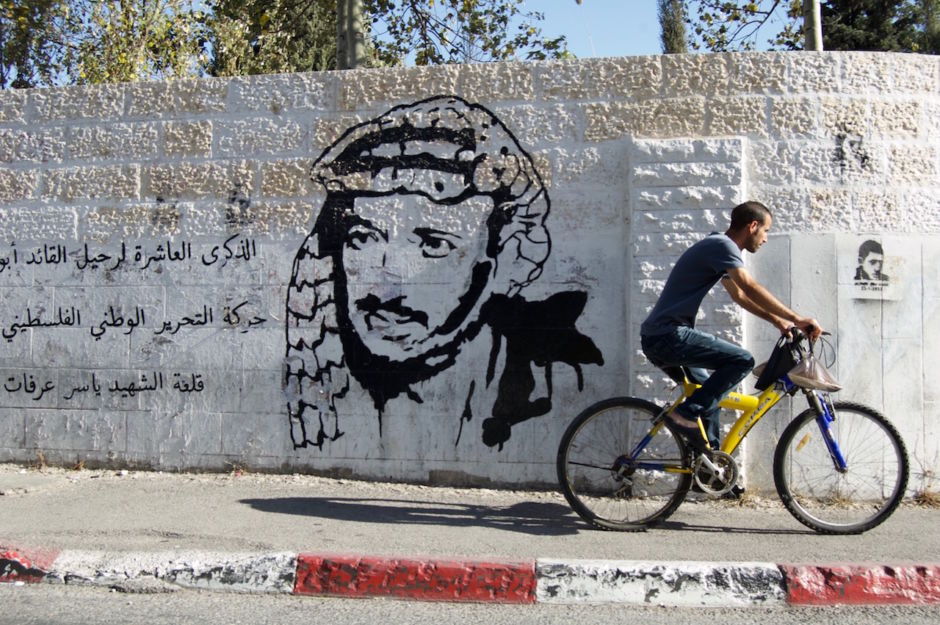 Yasser Arafat ran the Palestinian Liberation Organization and was President of the Palestinian National Authority for a decade as a member of the Fatah party, which he founded. He was a terrorist to many, a hero to others. Since his death in 2004, his image has taken a life of its own as a symbol of Palestinian nationalism and resistance to the Israeli occupation. There is little about life in Palestine that doesn’t require a long and thorough explanation, and the fact that a man behind terrorist attacks that killed thousands of Israelis was also one of the most important figures in the Oslo Peace Accords of the 1990’s demonstrates that often uncomfortable truth. 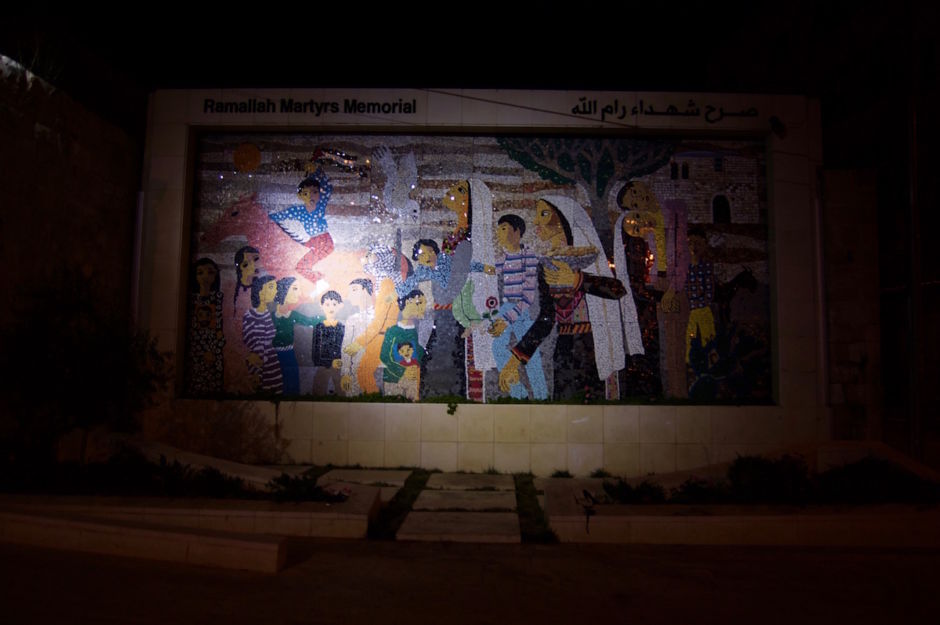 There are few debates more fiercely held between Israel and the Palestinians than those about of how killers are portrayed in civic life. The practice of honoring “martyrs” who died attacking soldiers or civilians from the other side of the Green Line goes back decades. In cities governed by the Palestinian Authority, a series of “Martyr’s” squares, streets and murals (like this one in Ramallah), commemorate Palestinians who carried out acts of terrorism. Meanwhile, plaques and museums in Tel Aviv honor Israeli organizations like the Irgun, which Israel’s first prime minister called “the enemy of the Jewish people” for committing acts of terrorism. Then again, the leader of these “enemies” became the first Israeli prime minister to win the Nobel Peace Prize for his peace treaty with Egypt in 1978. Only four years later this prime minister would start the highly unpopular 1982 Lebanon War, which saw the massacre of a refugee camp by Israeli allies while Israeli soldiers stood by. The debate over which side honors murderers is far from over as the Palestinian Authority currently spends millions of dollars on stipends for the families of those who have died or been imprisoned for attacking Israelis, be it with a bomb, gun or kitchen knife. If a new peace deal were ever to come about, it seems unlikely that these stipends would not be at the forefront of the discussion.

NewsOpen Letter To My Best Friend in Palestine (That I’ll Never Get To See)
Tagged
Palestine
What did you think of this story?
Meh
Good
Awesome

Traveling To Palestine Is Easier and Much Safer Than You Think

The Gaza You Don't See in the News

Why Women Can and Should Travel Solo in the West Bank

How To Travel To Gaza

Street Art Can Turn the World Inside Out

Traveling the West Bank on an Empty Water Bottle

Chasing a Runner's High in the West Bank

Enduring War and Power Shortages, You'll Be Amazed at How Gaza's Startup Scene Carries On.