Dagashi is the nostalgic, old time junk food without pretense– the kind many Japanese adults today probably bought as children at a nearby mom and pop shops decades ago.

Alas, kids get more money from their parents these days and want the newer and fancier snacks, causing many old dagashi shops to close. The sight of a dagashi shop is no longer so common, but if you find one, go in with 500 yen, grab a basket, and you’ll walk out with the toothy grin of a child and a handful of unusual treats.

Here are a few unique items with flavors you can’t find at home.

Think of a long and perfectly cylindrical Cheeto, with Japanese flavors like spicy cod roe, ume boshi plum, okonomiyaki (Japanese savory pancake), and tako yaki (octopus dumpling balls). I’ve crumbled these up and used them as toppings for steamed rice when I was running low on furikake (seaweed seasoning for rice). 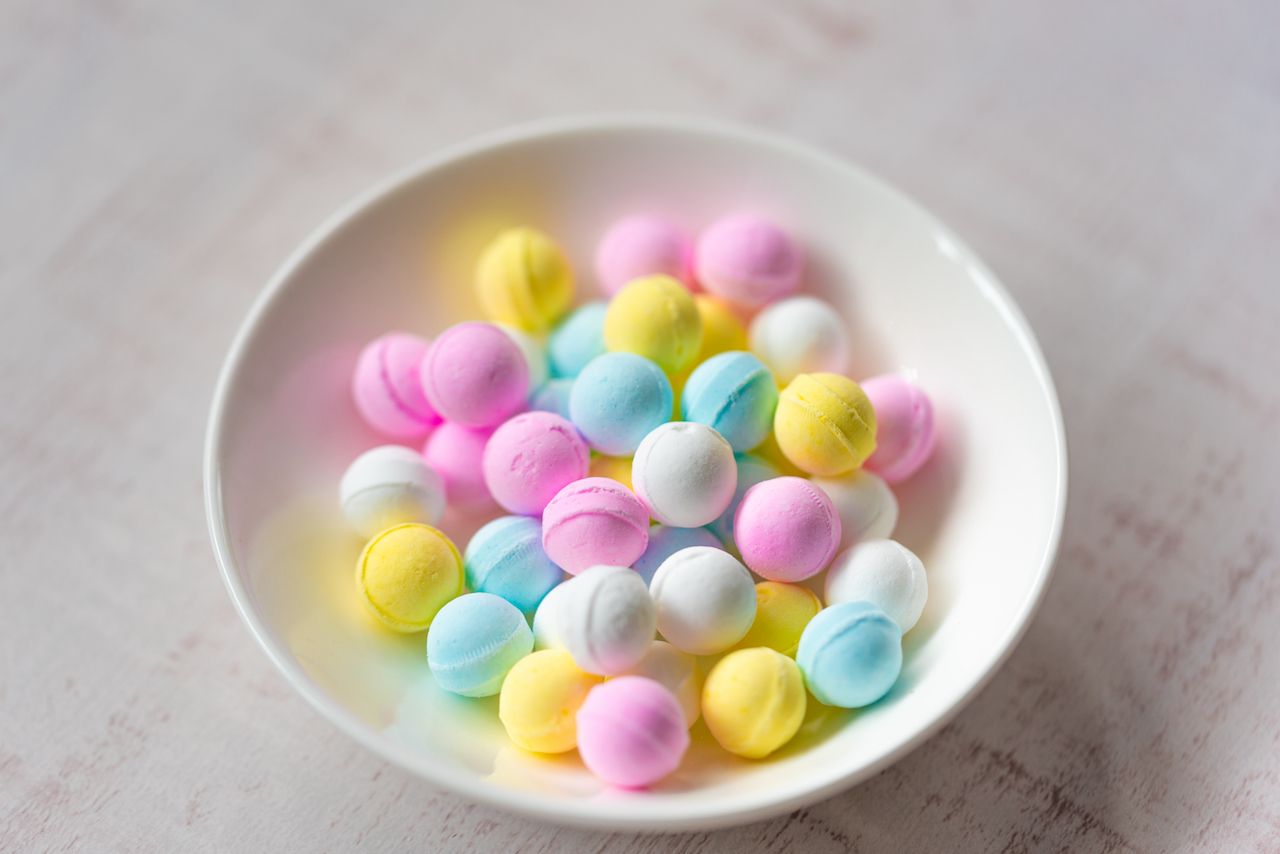 Ramune is like Japan’s version of Squirt in the classic glass bottle, except it’s got a smoother taste with less citrus aftertaste. A glass marble that acts as a cork is pushed down to the bottom of the jar before gulping. Ramune is also a type of a candy, similar to Sweettarts but thicker and creamier upon melting in the mouth. It comes in miniature plastic toy replicas of the Ramune bottle, Japanese soft drink cans, or fruit shapes. Keep the containers as toys.

If you like to snack on uncooked instant ramen noodles, this one’s for you—these uncooked and seasoned yakisoba noodle bits can’t quite be reconstituted as well as instant ramen if you were to add water, but regardless, they’re still yummy. 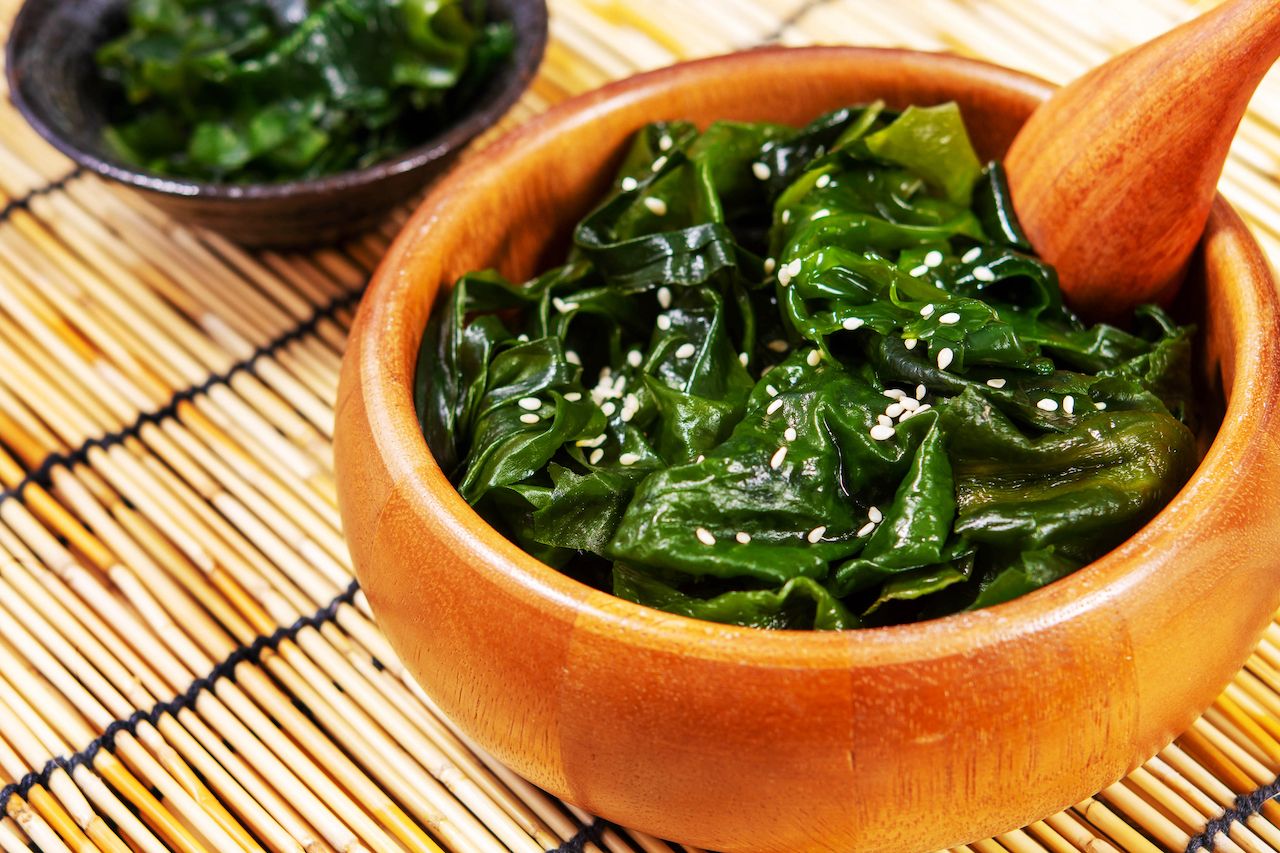 Imagine a Wrigley’s gum-like packet, but instead of gum, you pull out sheets of perfectly rectangular vinegared seaweed sheets. It’s not only far less noisy than chewing gum, it’s also a healthier alternative.

A slice of daikon radish is preserved in a brine of saccharine sweetness, ume boshi-like acidity , and a neon red color guaranteed to tinge your tongue pink. It’s a pickle snack, much like the kosher dills you used to munch on late at night. 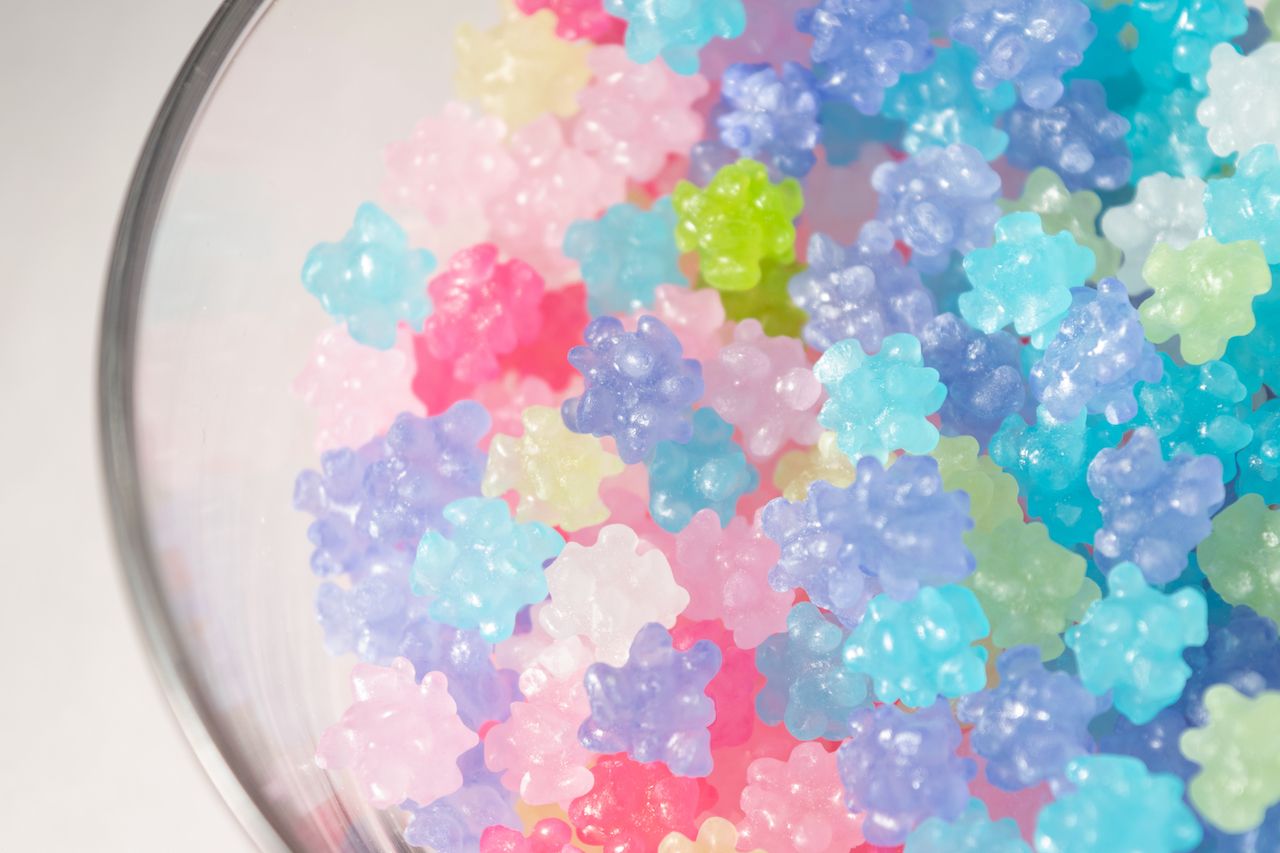 These colorful little spiky stars are pure sugar—eat enough and you’ll get your sugar high. They’re one of the oldest Japanese candies, believed to have been around before the 1700s. They are possibly from the arrival of the Portuguese—I read that konpeitou came from the Portuguese word confeito, which means confectionary.

Fu is a type of Japanese wheat gluten, which puffs up when placed in soups. Fugashi is the brown sugar sweetened version which softens in the mouth with the first nibble. It’s much like a compact and hard cotton candy in texture, but a bit spongier when mixed with saliva. 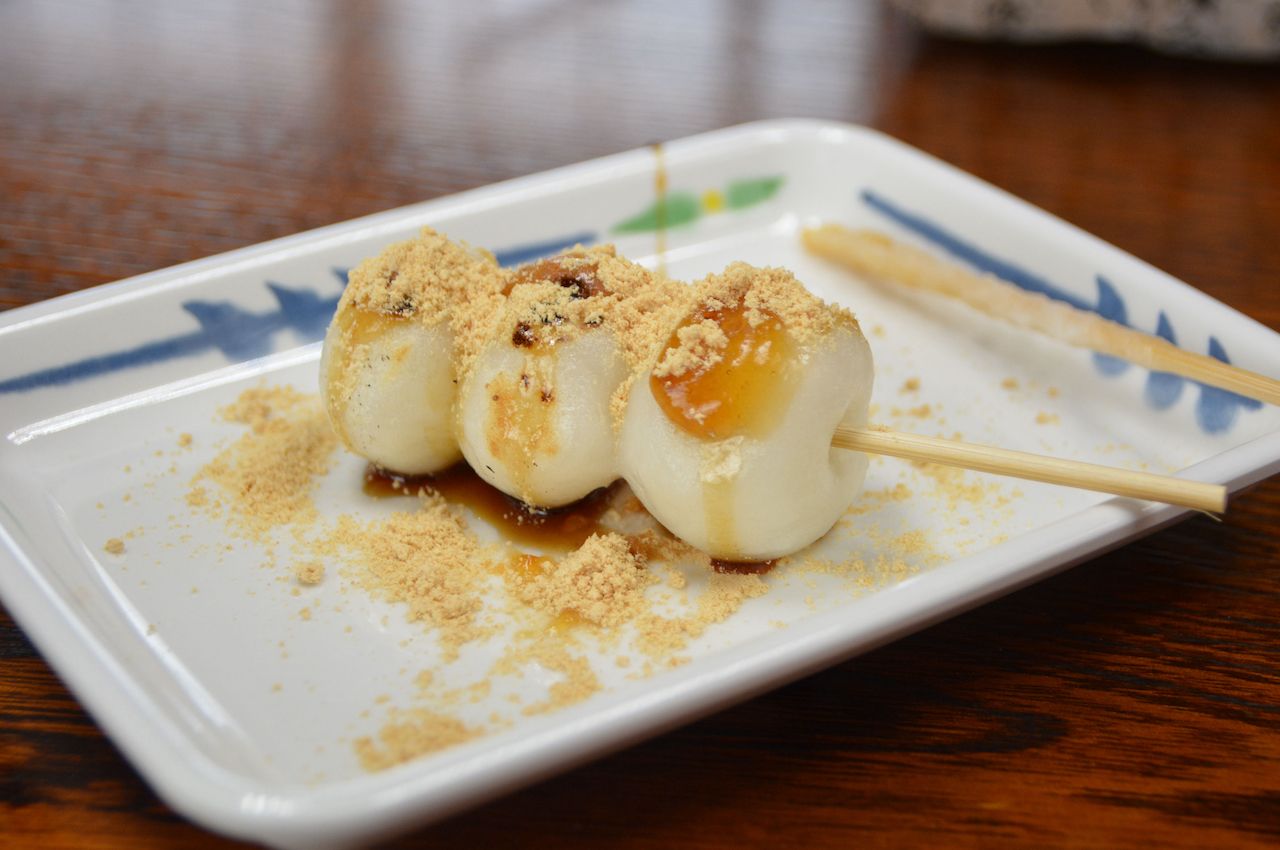 Kinako is a dry roasted soybean powder used to season plain mochi—if you are known for pouring packets of kinako in your mouth as a snack, you will love the kinako stick. It’s the condensed version of where lots of kinako are packed together with sugar syrup and rolled into a stick.

You either like this stuff or are repulsed by it—it looks like a fruit roll up, but its fishy smell and taste is a giveaway that signals highly processed, flattened squid. 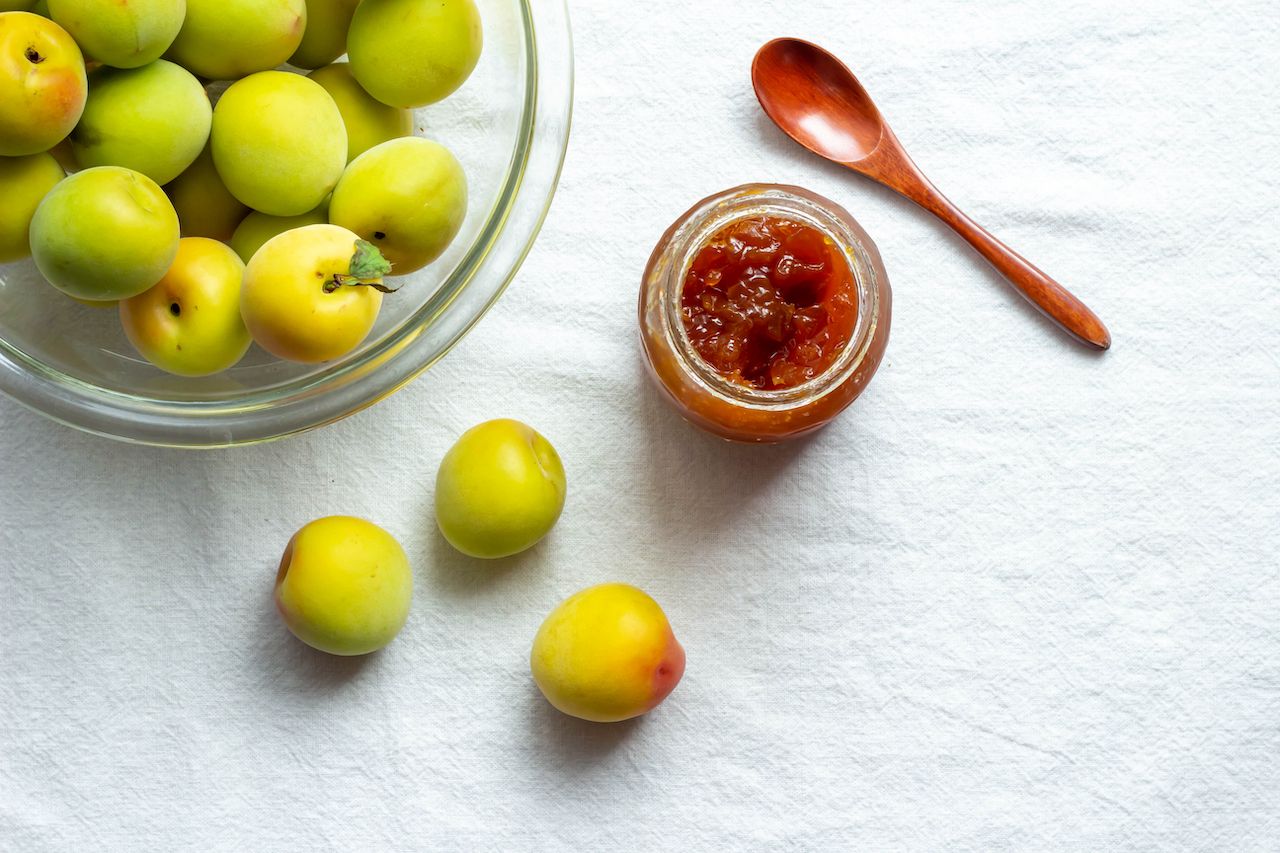 A sweetened and unnaturally red jam made of ume plums, it comes in a square packet much like the ketchup at McDonalds. It’s sucked from the plastic packet, or spread between two round wafers before munching.

Post World War II, the kids found neri ame to be fancy candy, or so I was told. A glob of brightly colored malt glucose syrup is slathered onto chopsticks which kids can use to soften the candy before sucking. 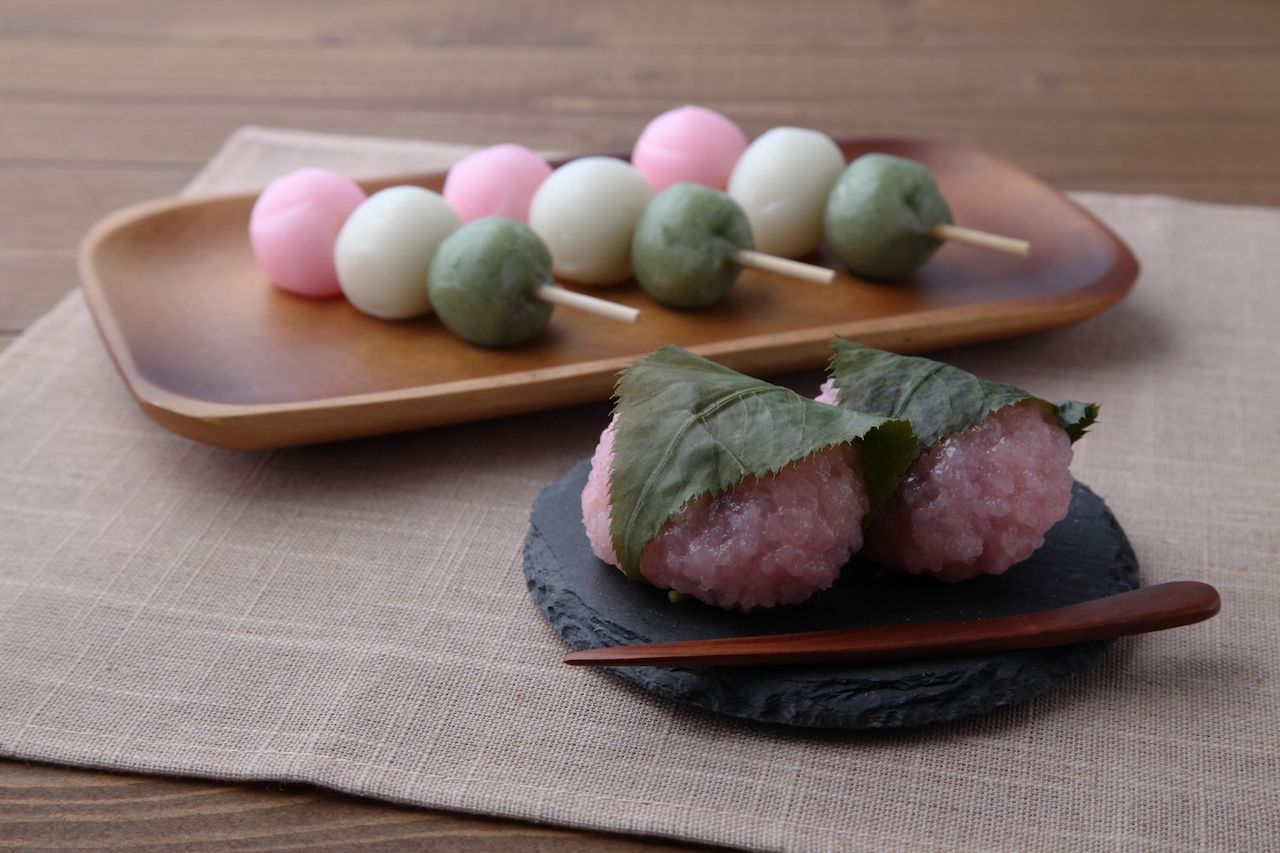 This isn’t the real mochi, as it’s ingredients say mostly sugar, rendering it more like a chewy fruit jelly. It comes in a shallow tray with miniature square compartments that hold the candy, and a toothpick to pick out the mochi bits— it comes in different flavors such as cherry, fruit medley, and even Coca Cola.

If you spent your childhood in Japan twenty plus years ago, yogurt in glass jars was commonly delivered to the home by Meiji Company. This one is a small plastic replica of a yogurt jar, but filled with a powdered fruity candy instead, which like the vintage yogurt, comes with a wooden spoon for scooping. The candy, unfortunately reminds me too much of fruit flavored children’s konagusuri (powdered medication).

Headed to Japan? You might want to look at Ten Extraordinarily Useful Phrases for Japanese Travelers. You also might want to know what NOT to do in Japan.

Tagged
Travel Japan
What did you think of this story?
Meh
Good
Awesome

Hilton’s Vallarta Riviera Will Change Your Mind About Booking All-Inclusives
Touring Hawaii by Train Is an Unexpected and Fun Way To See the Rainbow State
How To Make the Most of a Weekend Trip To the Catskills on a Budget
These Stunning Cabins Are the Ultimate Zion National Park Basecamp
The Optimal Itinerary for a US National Park Road Trip, Mapped

Watch What It’s Like To Live Inside Tokyo’s Most Famous and Bizarre Building: The Capsule Tower