What was once considered the most dangerous place in the world due to the drug cartel’s violence has now reached its lowest crime rate in three decades, according to insightcrime.org, and the US Department of International Travel has stated in their latest update that the security situation in Colombia has improved drastically in recent years. The country is experiencing a renewal in travel interest, and rightfully so. Here are 17 compelling reasons to make Colombia your next plane ticket purchase. 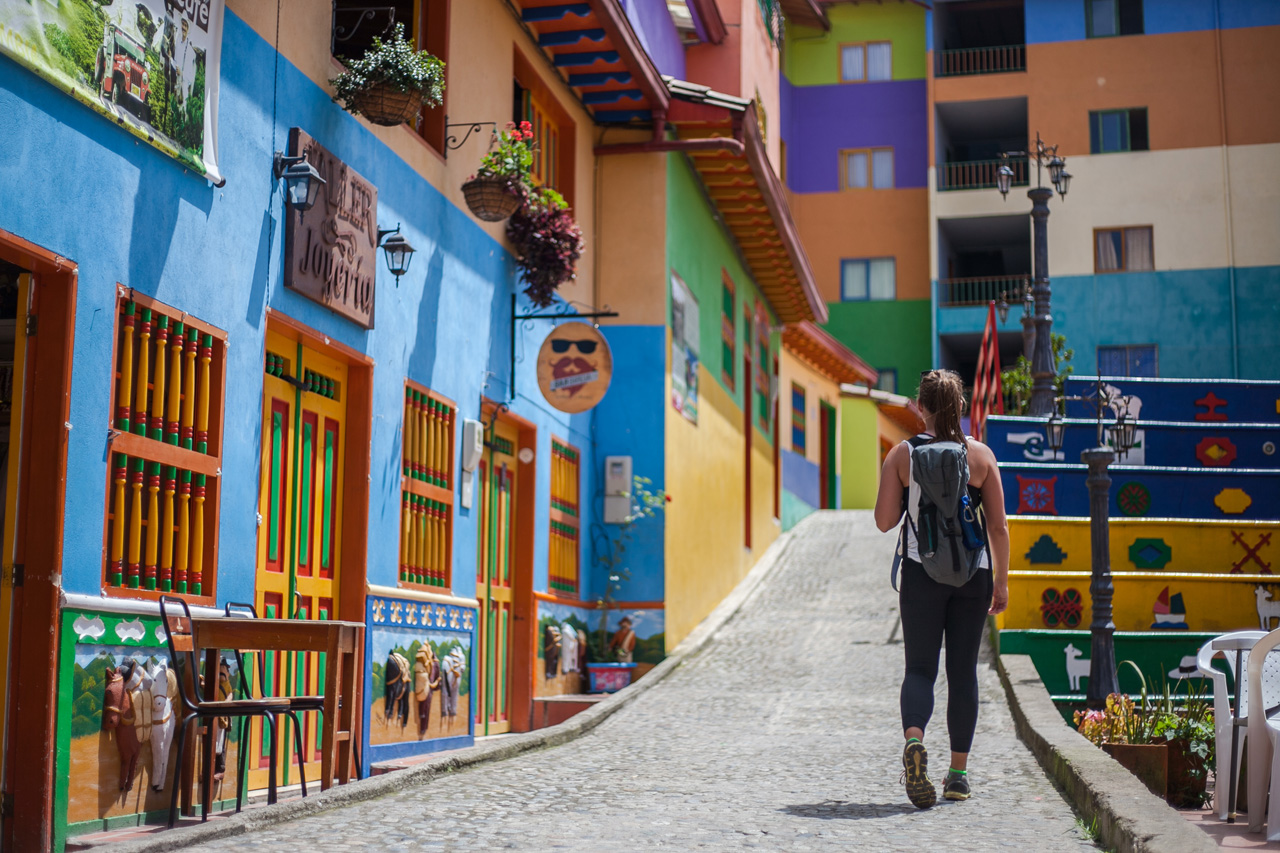 The extravagant use of color is an ever-present attribute one will notice while walking the streets of Colombian cities. In the small town of Guatapé, they show off a wide palette of colors by decorating nearly every inch and corner of their town center with vibrant tones and accent the walls with artistic zócalos, which are a pattern of pictures repeated along the base of walls. 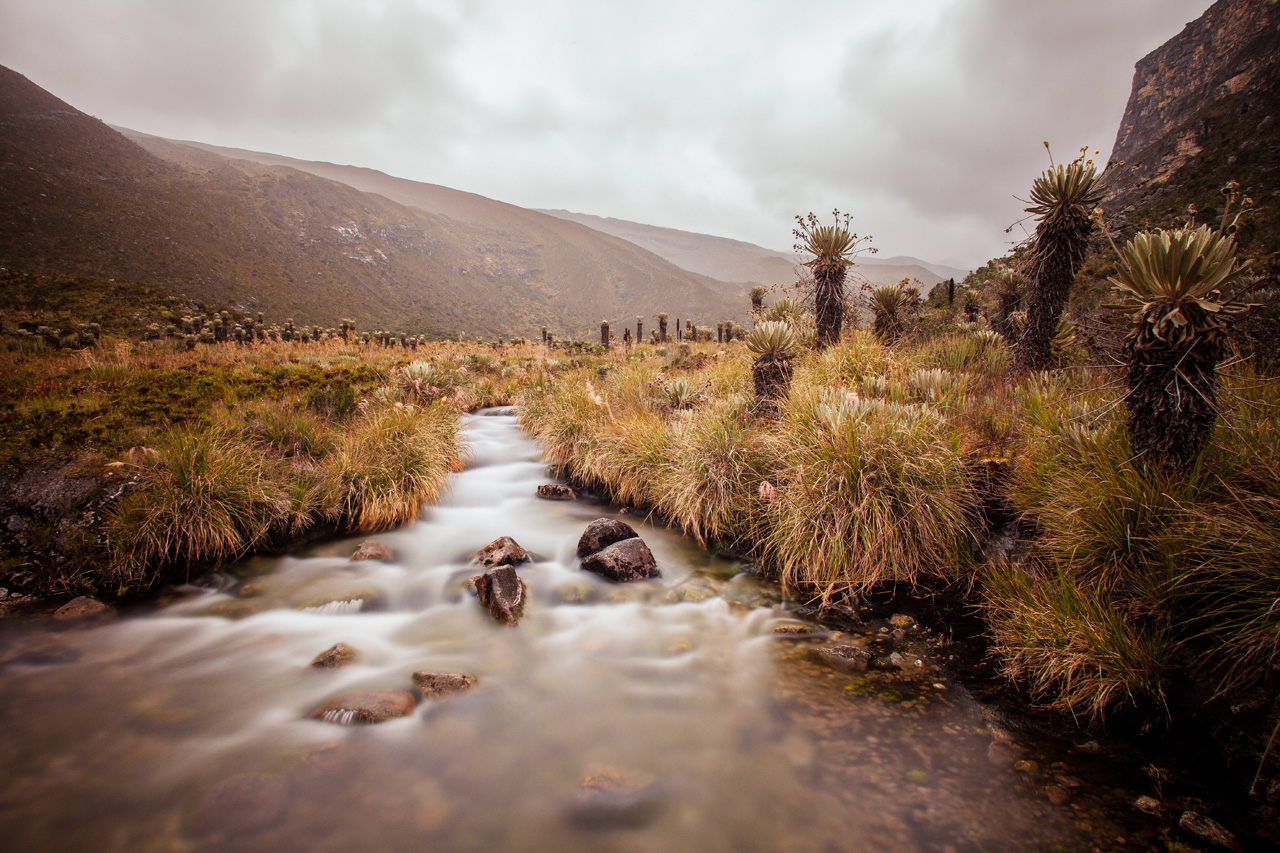 Most people don’t associate Colombia with high mountains but upon visiting realize that most of the time, you will be surrounded by them. The country’s tallest peak is Pico Cristóbal Colón at 18,700ft. but there are also plenty of lower, more accessible places to enjoy the great outdoors. This is the Valle de Frailejones, named for the type of sunflower that grows here at unusually high altitudes. 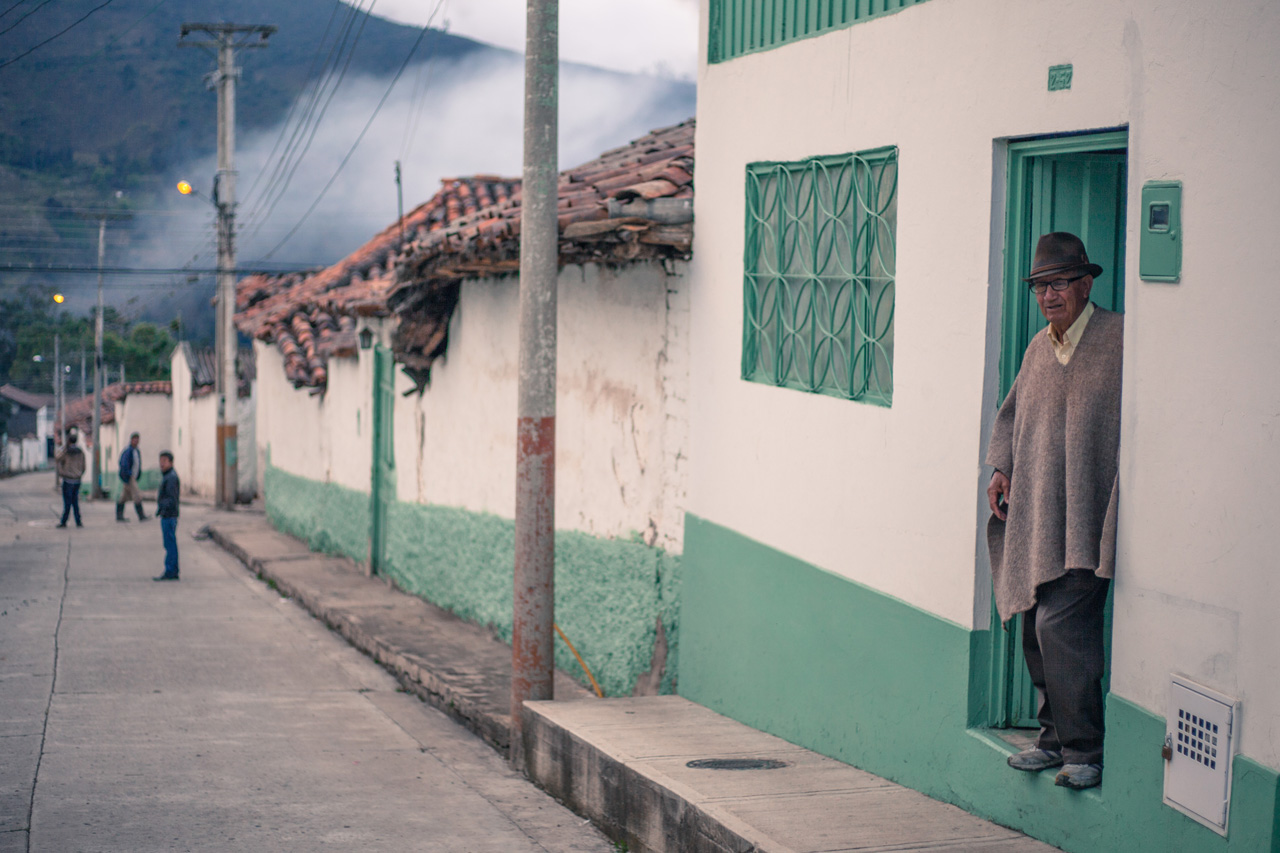 While taking in the mountain activities that Colombia offers, you’re also rewarded with staying in some of the most pleasant and satisfying high altitude towns such as El Cocuy in the foothills of the Andes. The entire town is uniformly painted in a bright white with seafoam green highlights all topped with clay textures of the terracotta roofs. 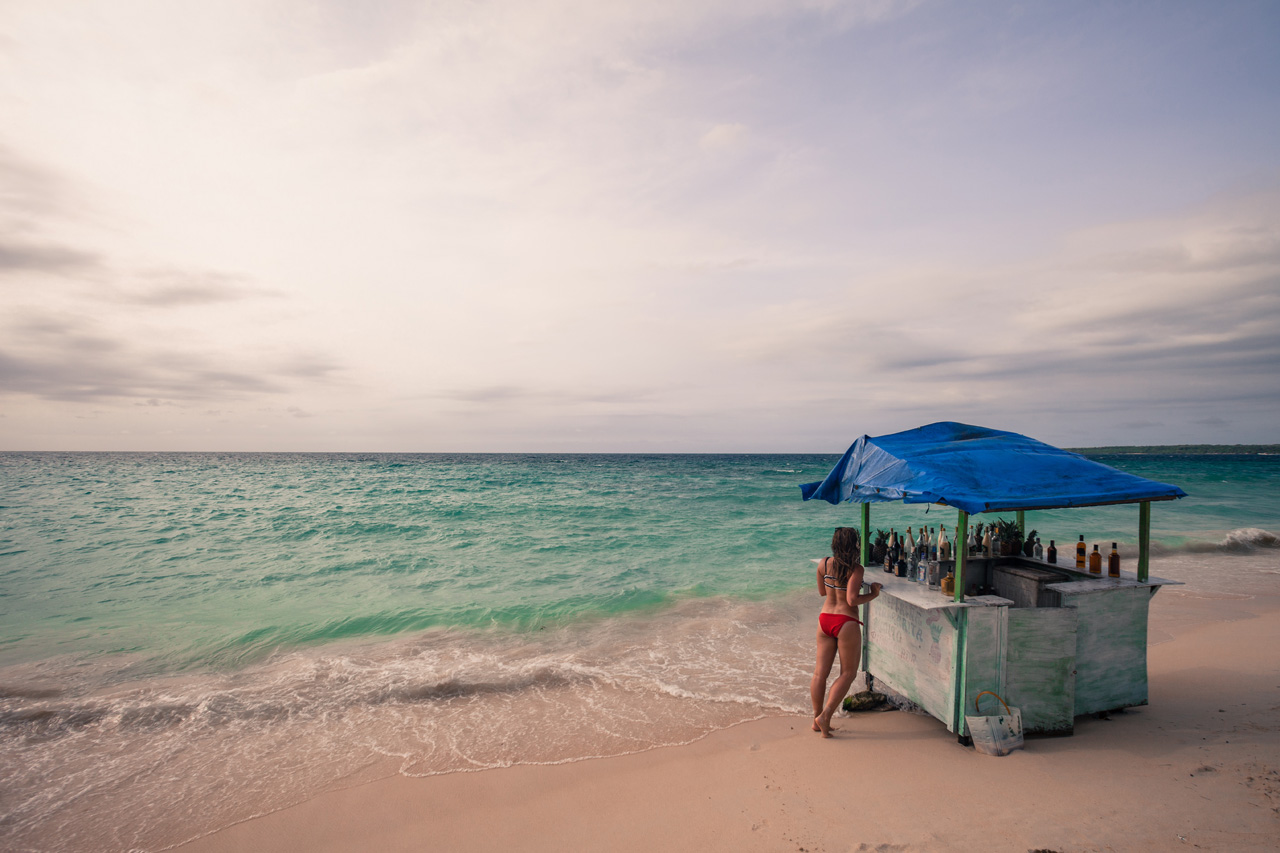 The north coast has numerous spots to relax and enjoy the white sand and azure water. 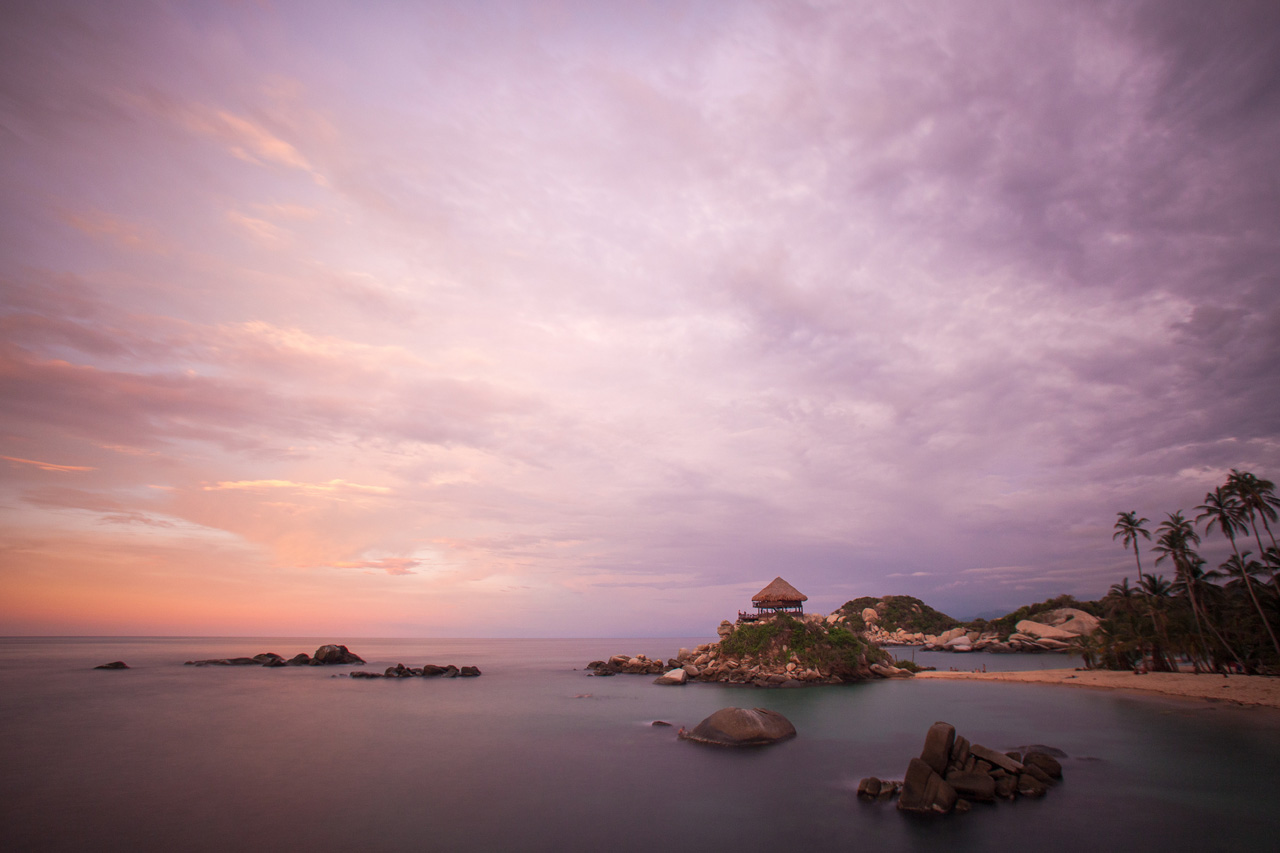 A main draw to the north coast of Colombia is Tayrona National Park which might hold the mainland’s most spectacular beaches. It can get very crowded during high season, however, not as many visitors take the time to make a two-hour hike to the secluded bay of Cabo San Juan de Guia and spend the night in a hammock with the actual ocean as your white noise maker. 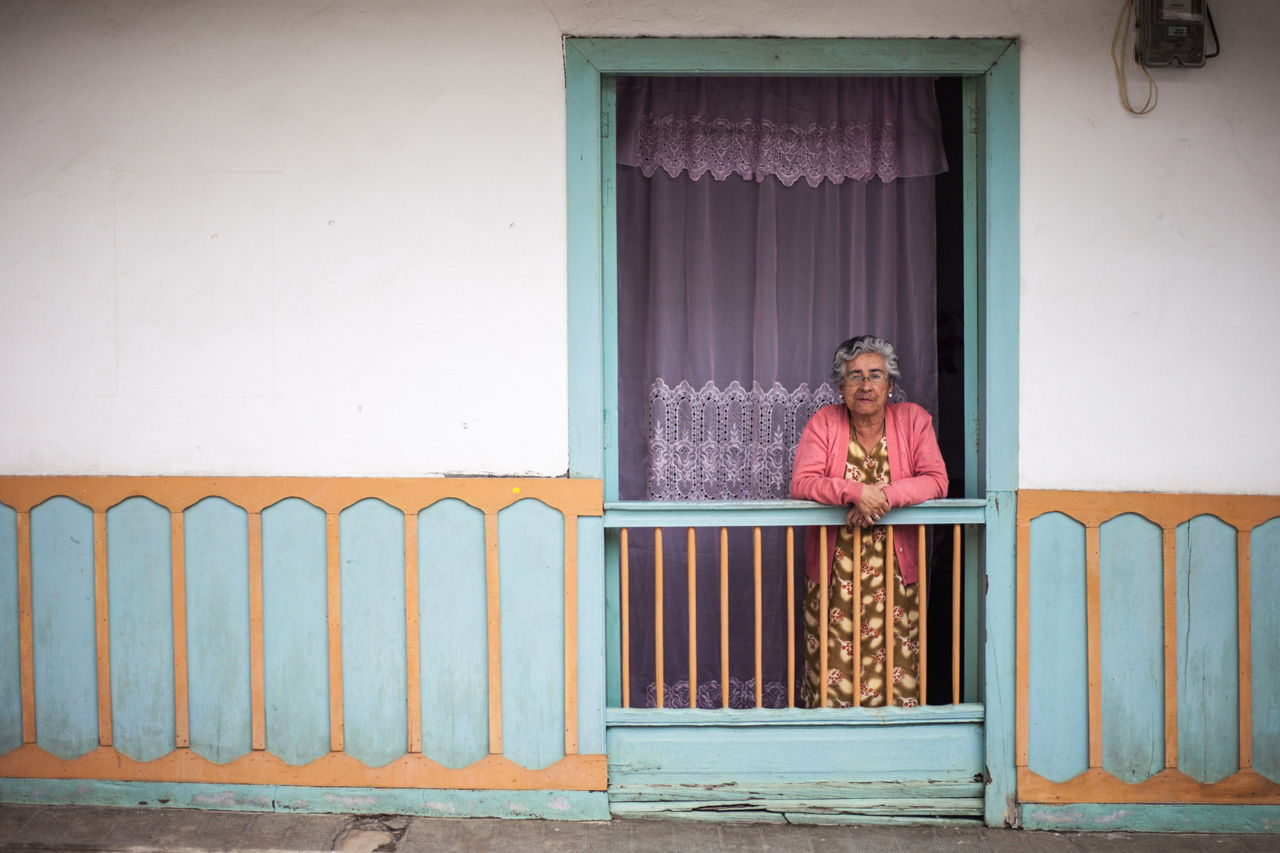 One might think that Colombians actually enjoyed you visiting because time and time again friendly locals provided us with invitations, offered directions, and gave recommendations like we were neighbors. 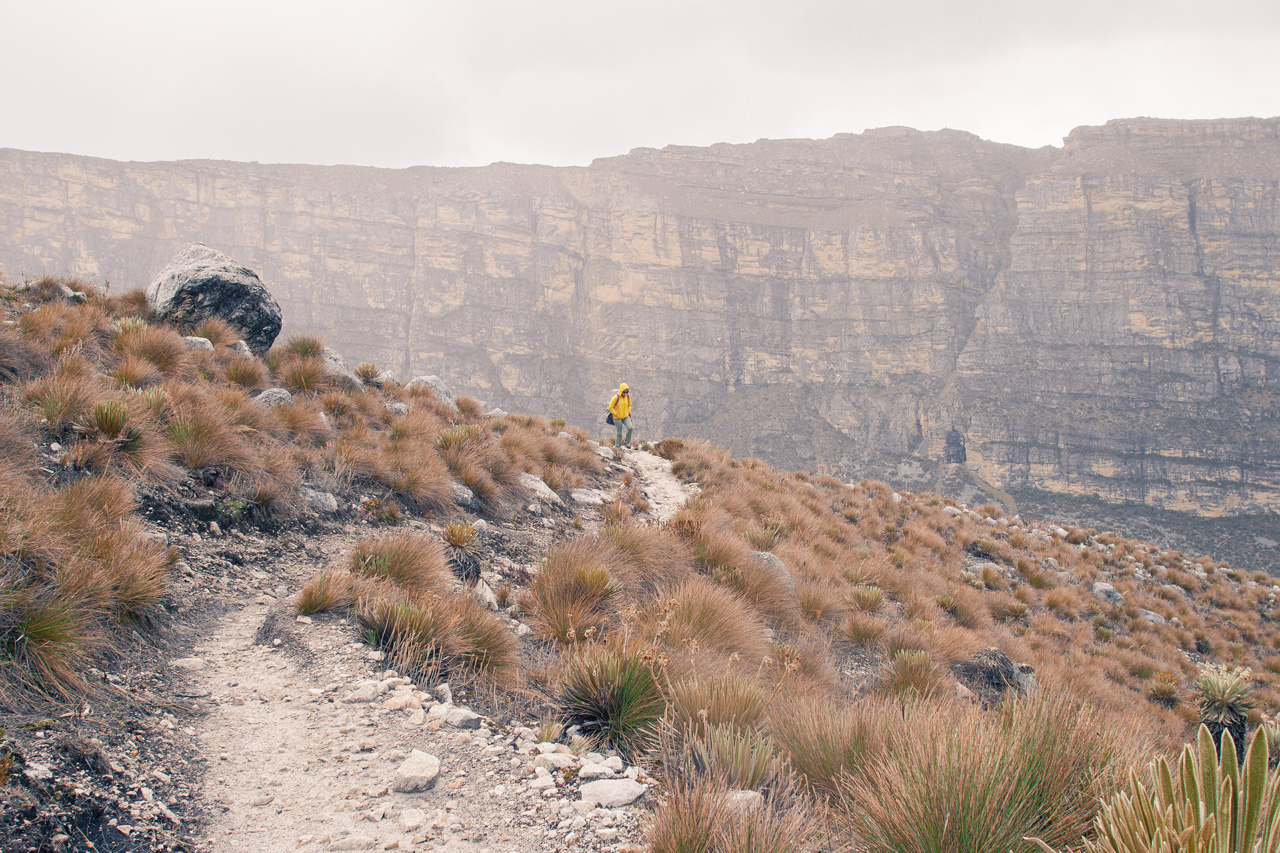 This reason deserves an entire story to itself but one of the highlights was hiking the lofty Andes Mountains in El Cocuy National Park. The park has alpine lakes surrounded by 17,000ft. peaks with options of staying at cozy haciendas and taking day hikes or going all out on a week-long camping adventure around the entire park. 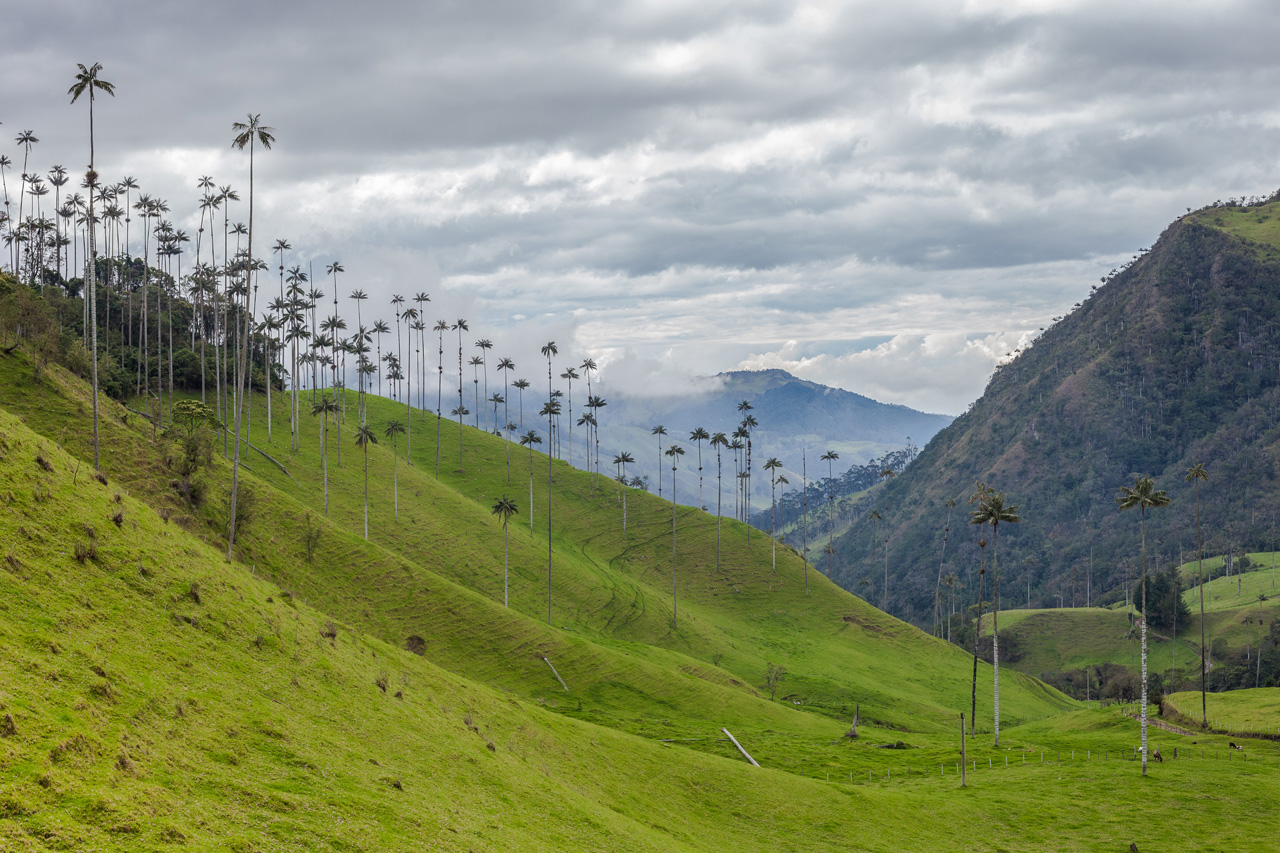 One of the most impressive natural sights in Colombia is the bewildering Valle de Cocora. This gorgeous valley trail winds through jungle, alpine forests, and wide pastures that are dotted with the world’s tallest palms. They stand erect, somehow balancing their immense height, some growing up to 200ft. tall. 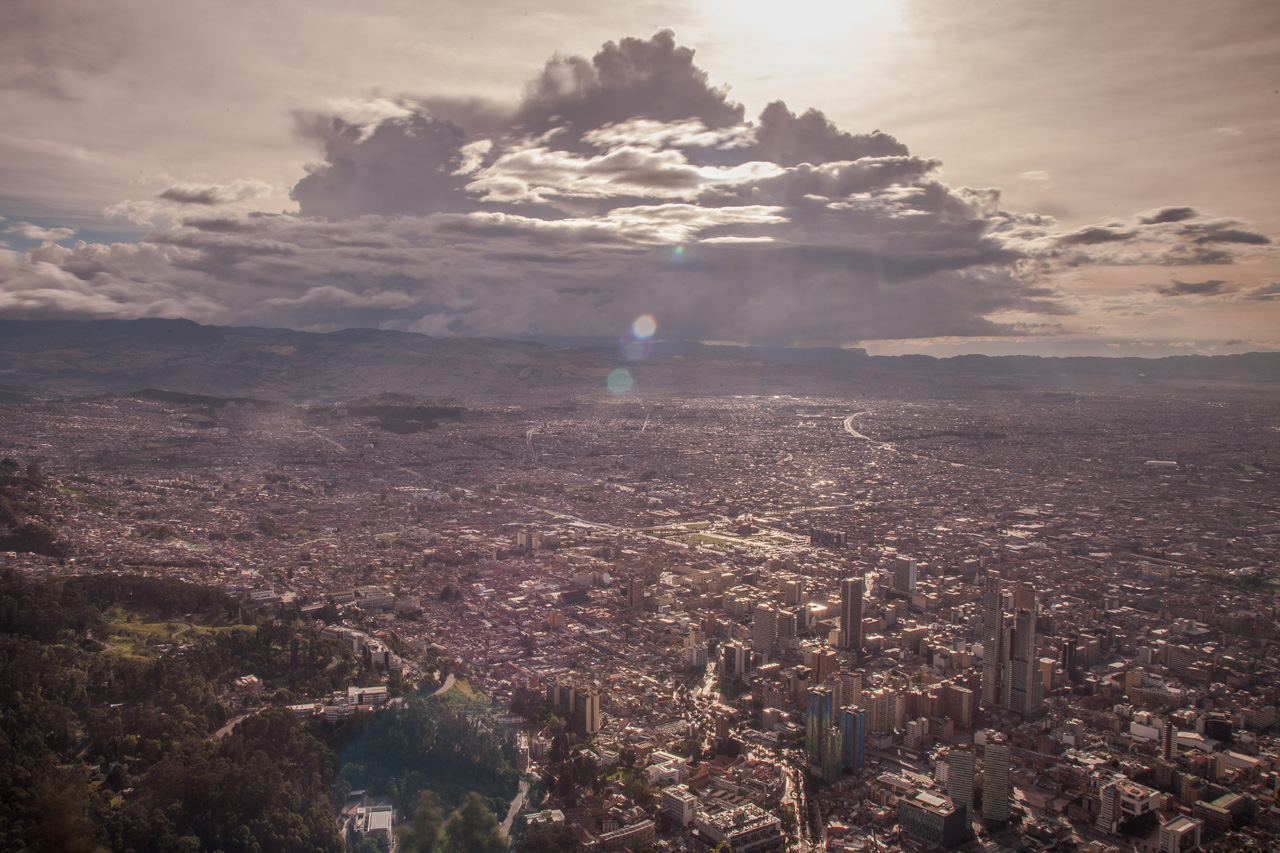 Sitting at 9,000 feet above sea level and surrounded by the Andes Mountains, Bogotá is a massive city with just under 10 million inhabitants. It has a wide diversity of sites including the colonial La Candelaria region, the night clubs in the north, or Carrera 7 which might be the most entertaining street on the continent. 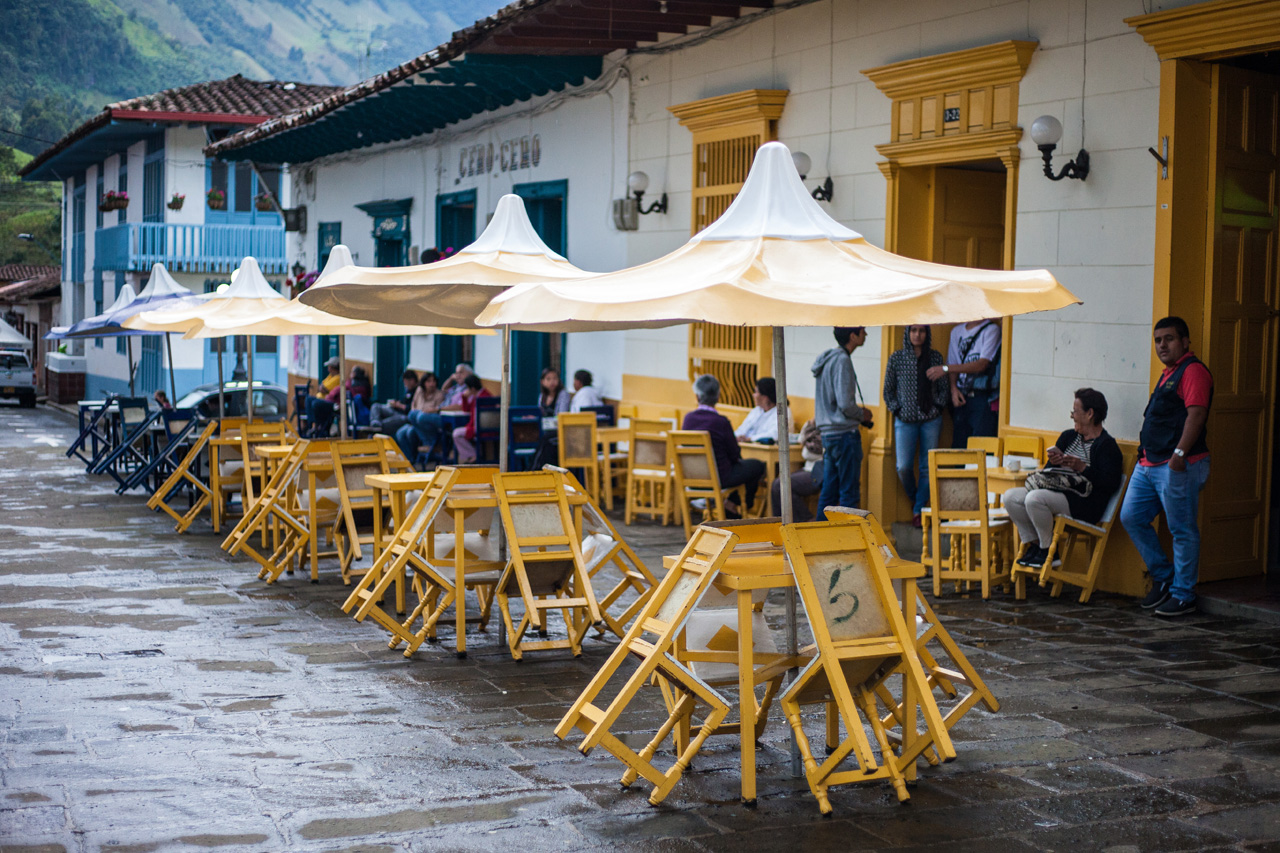 Every country has small towns but not all countries have them dotted around some of the most scenic landscape in one of the most prestigious coffee making regions in the world. Jardín is a tiny town where daily life revolves around their colorful main square where locals can be seen at all times of the day enjoying the mild weather and hot coffee. 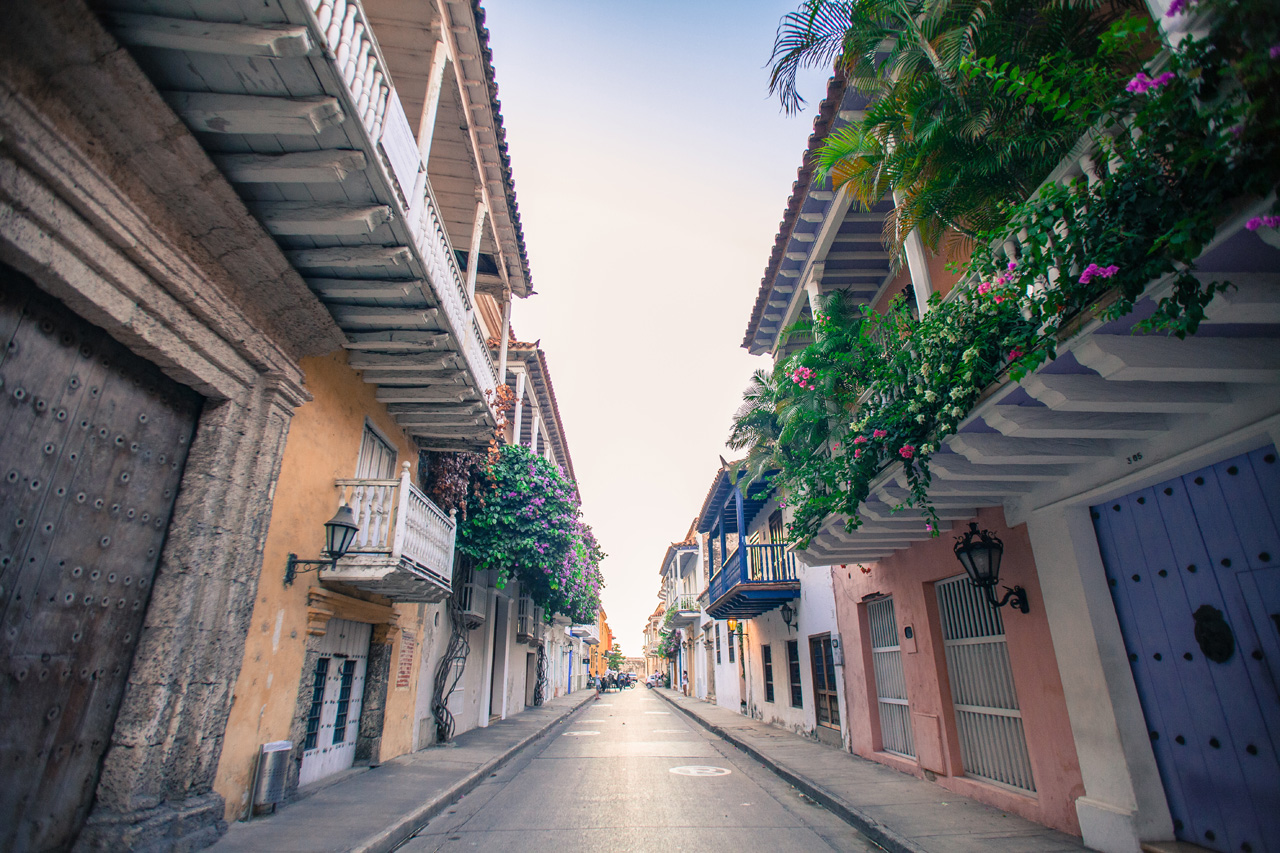 One of the most rewarding activities in Colombia may just be walking the streets. So many cities have colonial neighborhoods that still hold that irresistible charm only further accentuated by, what seems like, a constantly fresh coat of paint. Pictured is a street in Old Town, Cartagena which has Colombia’s biggest and best preserved colonial district. 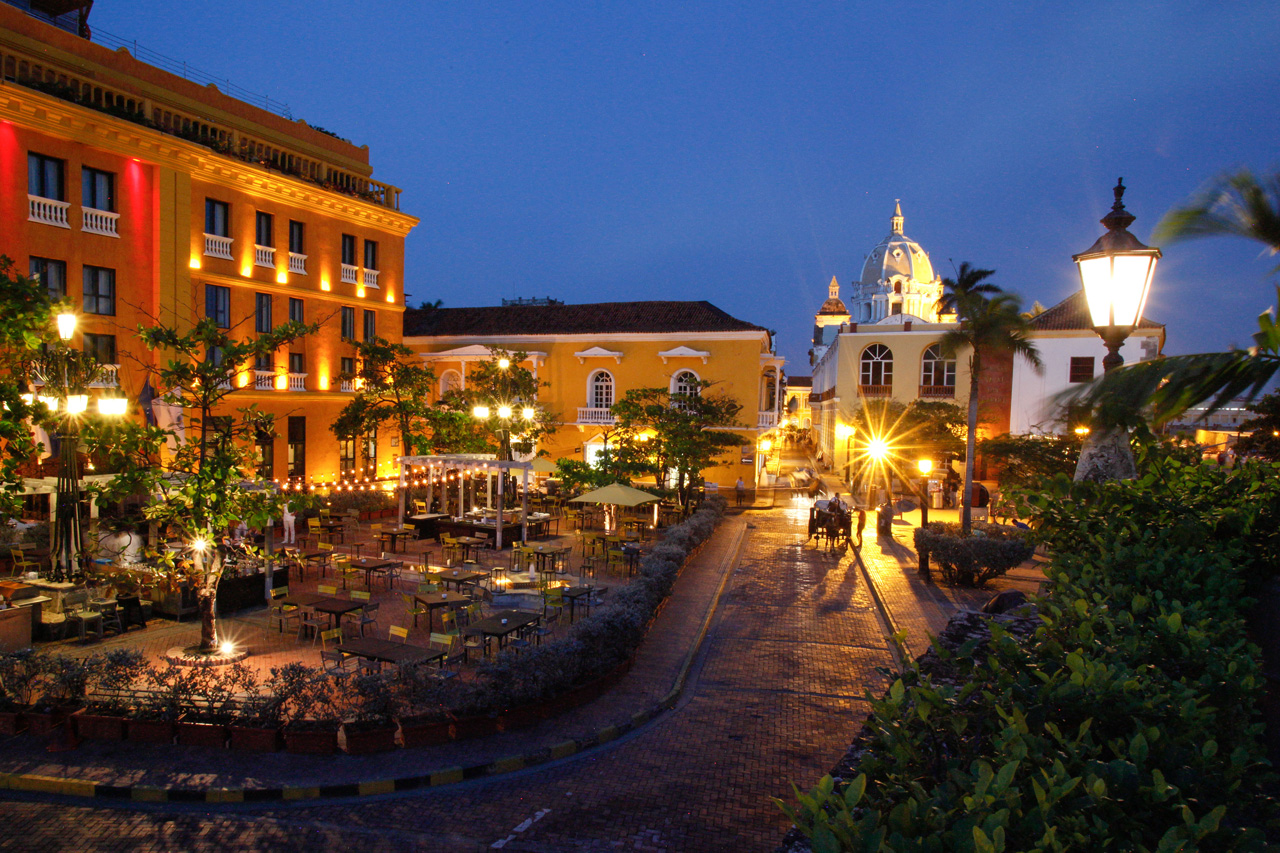 As the sun goes down in the Old Town District of Cartagena, the weather becomes much more comfortable for walking the streets and sitting at an outdoor café. This district has numerous outdoor cafés surrounding cobblestone squares, with dim lighting, and a cool breeze that blows in off the ocean in the evenings. Some favorites are found next to the old fortress wall near the ocean surrounding the Plaza de Santa Teresa. 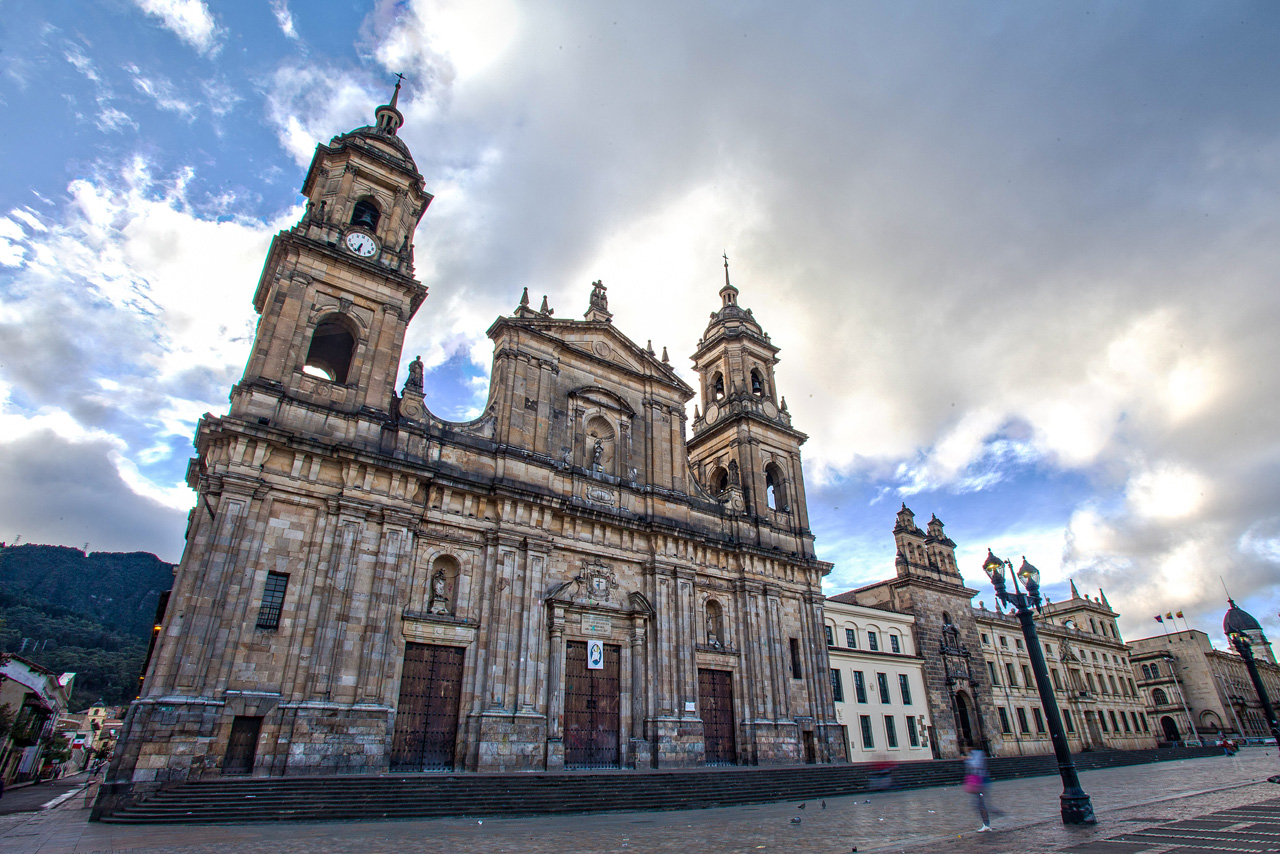 Colombia has witnessed many important turns in South American history and the historical center of Bogotá is a great place to see and remember the vestiges of those colonial times. Above is the Catedral Primada de Colombia in the Plaza de Bolívar. The church was started in 1807 during Spanish rule but wasn’t finished until after Colombia gained their independence from Spain. 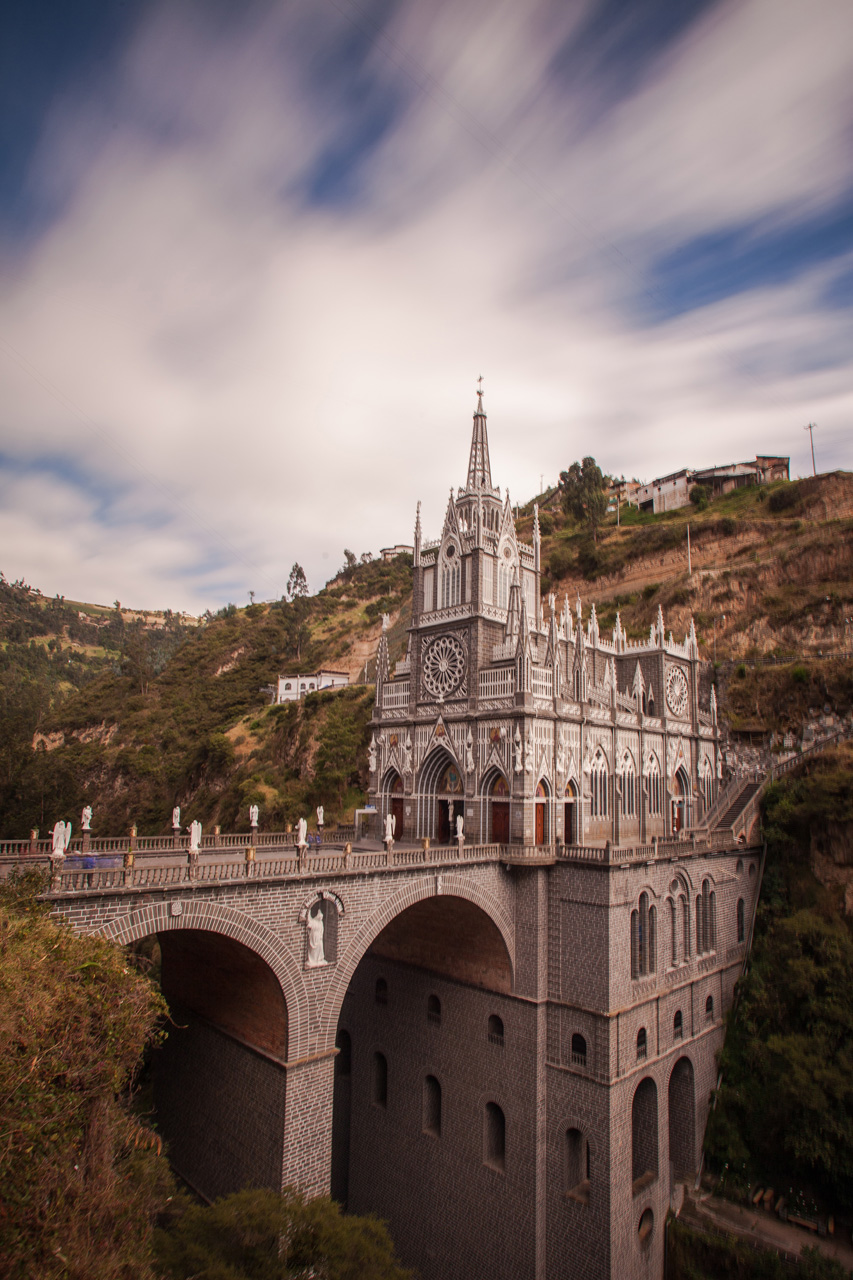 Built in honor of the sighting of the Virgin Mary and the location of a miracle, the Las Lajas Sanctuary, located in the southern town of Ipiales, rests stretched across a canyon over the Guáitara River and is only a 15-minute taxi ride from the bus terminal. 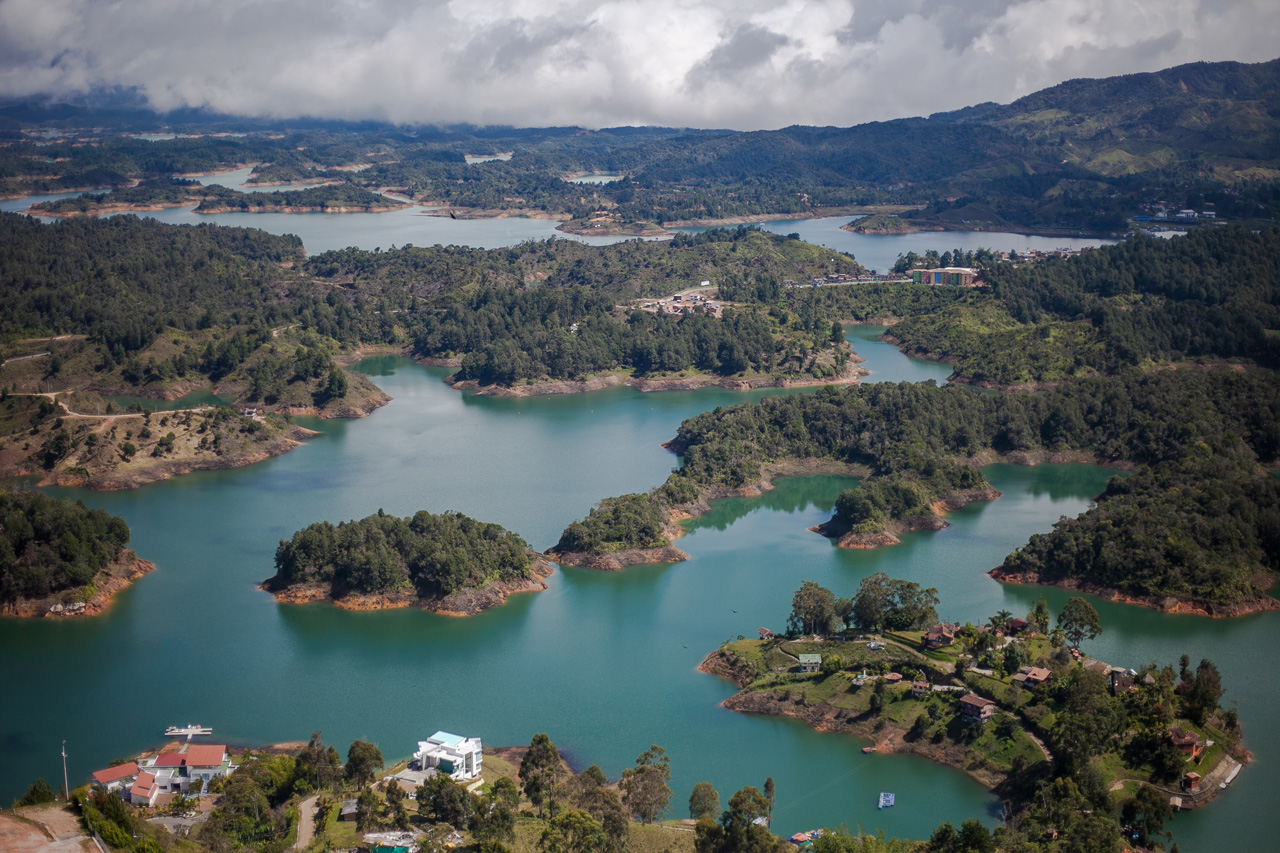 Around the town of Guatapé is a labyrinth-like lake system filled with sapphire waters that twist and turn until it reaches the horizon. To make it even more enjoyable, you get to view all of this from El Peñol Rock, a gigantic granite rock that juts out of the ground and gives you a 700 foot high bird’s-eye-view of the watery maze as it expands out in front of you. 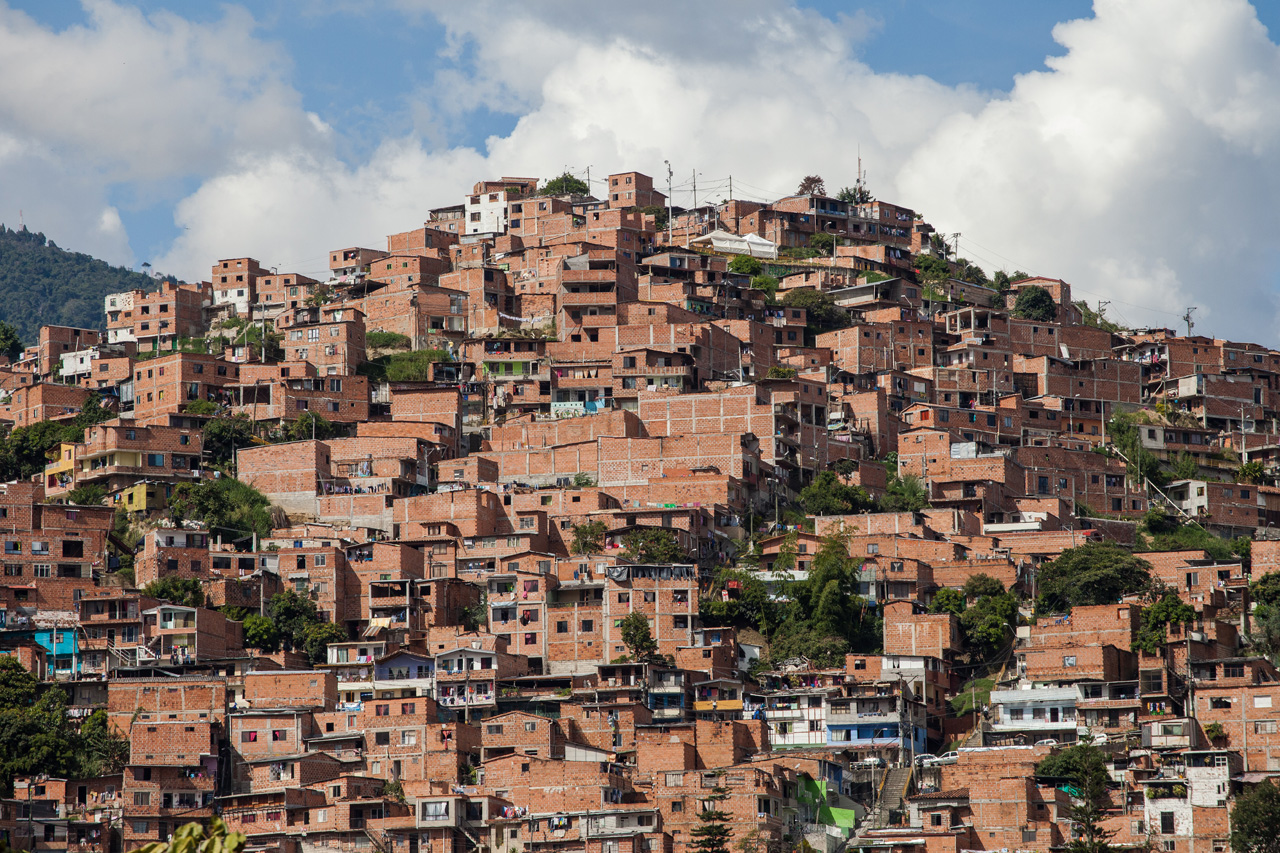 Colombia is no one thing or one type of place; it has an extremely wide range of landscapes, cultures, and economic situations. This neighborhood, sitting on the outskirts of Medellin, is just minutes away from a very affluent part of town and is now connected by Colombia’s first Metro system equipped with cable cars to help inhabitants more easily reach the upper tangles of the brick mountain of houses. 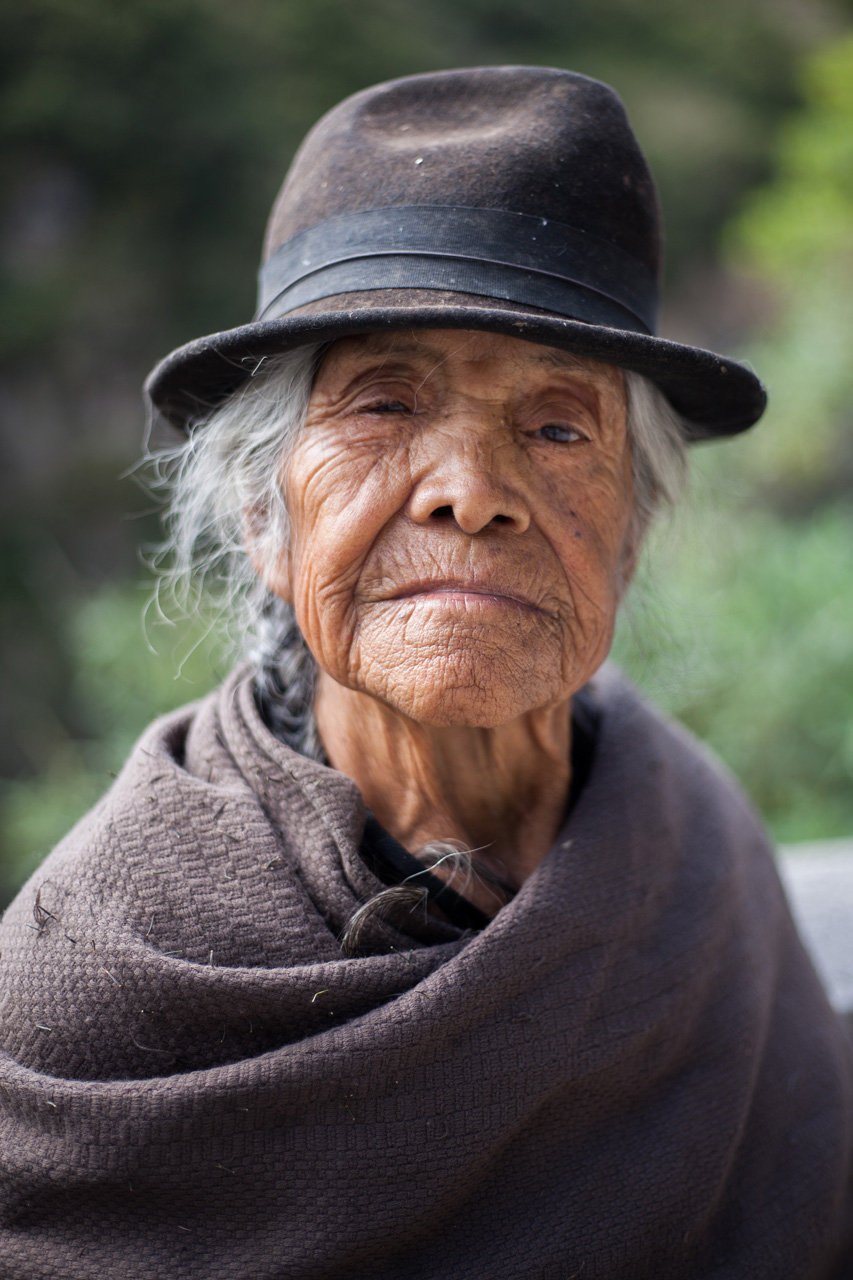 Here is a high mountain Quechua woman on her way to a religious pilgrimage.

Tagged
Photo + Video + Film Colombia
What did you think of this story?
Meh
Good
Awesome