YES, THERE ARE GORGEOUS BEACHES. Majestic volcanoes. Incredible rainforest. Fantastic wildlife. But perhaps the best thing about Costa Rica is its people, their culture, and what they can teach us northerners about how to live. It’s in their very language — a philosophy of letting go, relaxing, and knowing how to enjoy life.

So if you’re sick of brete, grab your half orange and head to Costa Rica to carry it soft and enjoy the pure life. (Read on to decode.)

This expression is a good place to start, because it combines two essential Costa Rican terms: Tico, which is what Costa Ricans call themselves, and gallo pinto, literally “spotted rooster,” the ubiquitous and awesome traditional rice-and-bean breakfast dish of Costa Rica.

This quintessential Costa Rican phrase tells you pretty much everything you need to know about the Tico approach to life. It has many meanings, all friendly: “great” or “fantastic,” “hello,” “nice to meet you,” “thank you,” or “you’re welcome.”

The word mae is heard with astonishing frequency, especially among men. It’s used like “dude” among friends, or it can refer to any person.

Example: “Mae, that mae has no idea what he’s talking about, mae.”

Ticos love to play, but they also love work — as evidenced in the commonly heard phrase Mucho brete, gracias a Dios (“Lots of work, thank God”).

Example: “I’d love to go to your beach barbecue, but I have a lot of brete.”

This teeny word has a baffling array of meanings. It can be a filler word akin to “hey” or “well,” or it can mean “obviously,” “what happened?” or “what can be done?” or even “there’s no explanation.” 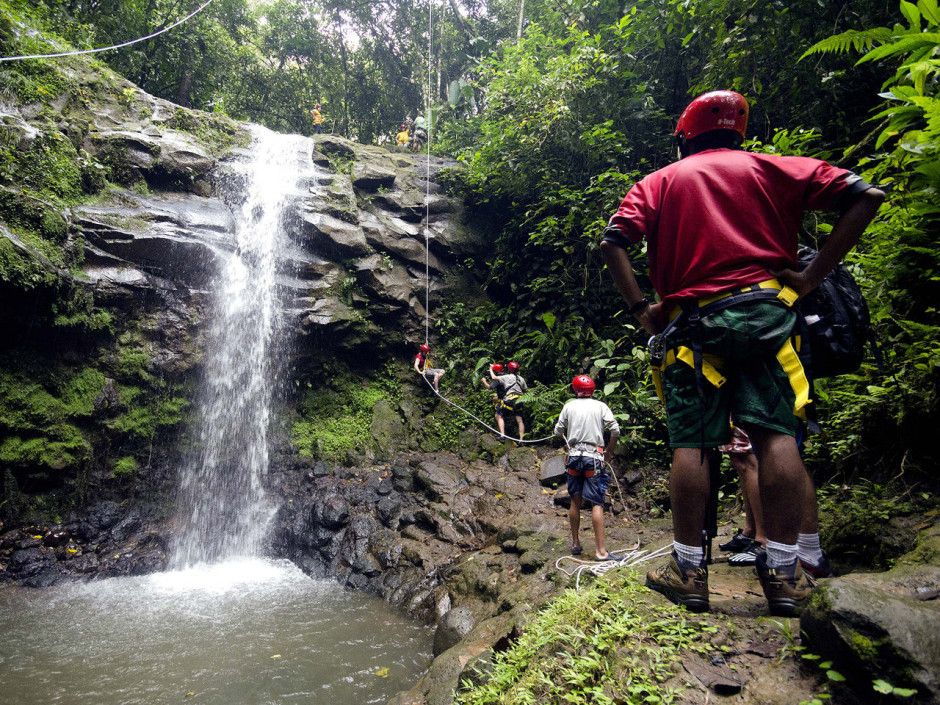 The origins of this Costa Rican slang standard are in dispute, but one theory is that it derives from the English phrase “too nice.”

Example: “Rappelling down that waterfall was super tuanis.”

Costa Ricans readily express appreciation for their good fortune and that of others.

Literally “what laziness,” this is what Ticos say when they don’t want to do something or are bummed out by something.

Literally “to carry it soft,” this expression comes in handy when you’re on vacation. We should also totally start using it in English.

This expression can mean “to talk bull” or “to shoot the breeze.” There’s also pura paja, “pure bull.”

Example: “José is talking straw. He has no idea what he’s saying.”

Does it get cuter than calling your partner your “half orange”? Ticos use this expression to describe their “better half” or “soul mate.”

Example: “I can’t live without you! You’re my media naranja.”

This graphic expression is used when someone is totally off base or has done something grossly inappropriate.

Examples:
“That’s not what I meant. You’re peeing outside the can.”
“He peed outside the can when he asked his wife if his girlfriend could move in with them.”

Embracing this expression is an important step toward learning how to relax. There’s also just suave (“easy” or “slow down”).

Ticos use this expression, literally “salted,” to say “tough luck” or “too bad.”

Example:
A: “Two tickets to Limón, please.”
B: “Salado! The guy ahead of you got the last seat.”

Soccer, of course, is the sport in Costa Rica. Ticos love watching it and playing it. If you want to get in on a pickup game with the locals, remember the word mejenga. The verb is mejenguear.

Examples:
“A bunch of us are getting a mejenga together down at the beach. Want to play?”
“Hey, here’s a soccer ball. ¡Vamos a mejenguear!”

Literally “good note,” this expression is used often in Costa Rica to say someone is cool or nice.

Example: “Andrea is buena nota. She let me drive her Porsche.”

When Costa Ricans listen or pay attention to you, they “give ball” to you.

Example: “I warned them not to go down that road, but they didn’t give me ball.”

Literally “go pulling,” this expression can be used to say someone is leaving, but also to say “go away” or, at worst, “get lost.”

Examples:
“Juan is done for the day. Va jalando.”
“Va jalando. I need my space.”

Those of us who mess up often will learn this expression — literally, “what a patty” — early on.

Example: “I accidentally knocked off his toupee. Qué torta.”

This is a friendly way to announce yourself when you arrive at someone’s home.

Examples:
“Qué es la vara? Are you mad at me?”
“Don’t believe what he says about me. Pura vara.”
“I like hiking, nature, camping, and toda esa vara.”
“Dude, cut it out. Tumba la vara.”

The zarpe is an important social institution in Costa Rica. No night out is complete without it.

Yes, we are referring to MacGyver of ‘80s TV. The ingenious secret agent who solved problems using paper clips and chewing gum rather than guns — Ticos take pride in having no army — is so beloved in Costa Rica that he has made his way into the local lexicon. As those familiar with the show may have guessed, hacer un MacGyver (pronounced mah-GHEE-verr) means to improvise or fix something with whatever you have at hand, or just to find a simple solution to a problem.

Example: “The zipper on this suitcase broke. Pass the duct tape and we’ll do a MacGyver.”