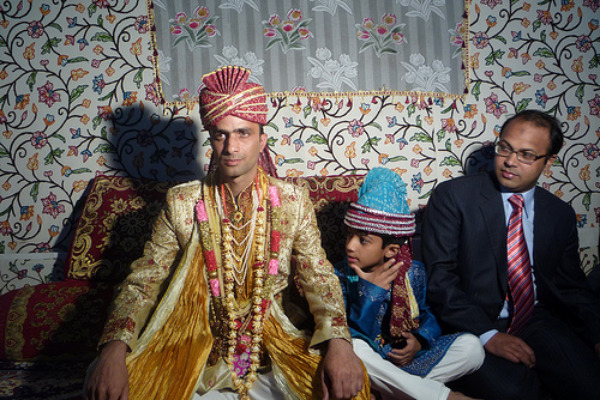 Attending a wedding in Kashmir leads to some unexpected situations.

SRINAGAR IS THE MUSLIM-dominated capital of Kashmir, India’s northernmost state. Resting in a valley between snow-capped Himalayas whose peaks are visible even on cloudy days, local tourist paraphernalia boasts that the city is “Paradise on Earth.”

Kashmir has been the center of periodic fighting between Pakistan and India since the 1947 partition, as both countries claim ownership over the state. Beautiful as it is, it is also highly volatile and prone to civil tensions that range from localized to crippling.

It is not a place I would have ventured as a young woman traveling alone, but Sayma had invited me to attend her brother’s wedding, where I would be the guest (and the responsibility) of her entire extended family. I couldn’t imagine a better or more interesting way to visit.

The night before I was due to leave, I heard from a friend that there had been fifteen injured in some small-scale riot in the capital city. I called my hosts and a friend who was politically well connected to try to gauge the situation. Everyone told me there wasn’t really anything to worry about and encouraged me to make the trip, and so I did. 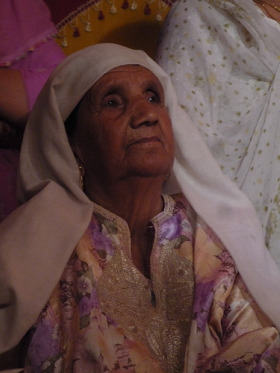 The recently built Mir household was in a quiet neighborhood south of the city center. Though a future second floor was planned, for the moment it was a one-story home, comprised of four rooms: a kitchen and a bedroom on the south wall with a bathroom between, and two sitting rooms in the front.

Aside from massive dresser-cum-closets that were built into the walls of the bedroom and one of the sitting rooms, and glass-fronted curio cabinets that were a staple of every middle-class Indian home I’d visited, there wasn’t a stitch of furniture anywhere in the house.

In my first hours in Srinagar, as I was welcomed and fed and questioned and encouraged to rest, all on the floor of one of the front rooms, I wondered whether this was because my hosts simply hadn’t had time to purchase furniture for their new home yet.

But as I went with the family that night to visit various relatives and friends, I discovered that this was simply how Kashmiri houses were set up. It had the effect of creating an automatic intimacy. There were no cushions to be adjusted or tables holding the day’s paper. In short, there were no distractions from the present company, which was, in a word, ample.

Whether it was the wedding, or because the early evening was the time for visitors, or because these houses were inhabited by far more people than I would have guessed (it was hard to tell without any distinguishing marks in any rooms other than the kitchen to indicate how they were used), it seemed every house we went to had at least a dozen people in it, in addition to our visiting party of six.

Perhaps the lack of furniture was a way to accommodate these vast numbers, simply the local iteration of India’s general economy of space.

Perhaps the lack of furniture was a way to accommodate these vast numbers, simply the local iteration of India’s general economy of space. In any case, the absence of furniture freed the rooms to serve an amazing number of needs, as I witnessed while floating between them over the days to come.

At night, we laid down thin mattresses and blankets on the floor to sleep. In the morning they were folded and piled up in the stairwell leading to the roof. In addition to being our bedrooms, the rooms served as ironing boards for the huge amount of laundry generated every day by the house’s numerous temporary residents and as dining rooms when the kitchen was already full.

They were the stage for the group of older women who gathered to sing melancholy songs every day to bestow good luck on the new couple. When some slight or annoyance occurred between two family members, they were the airing grounds for gripes, complaints and a few tears. The only silence they saw was when they were temporarily vacated to provide space for the more publicly pious of the group to lay down their mats and answer the call to prayer five times a day. 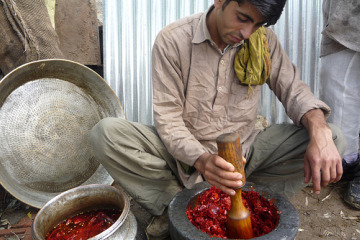 Everyone did their part to contribute to readying the house and preparing for the wedding. A tailor, who had come from Mussoorie, was commissioned to help measure the rooms for rugs, and to fit the last-minute fineries purchased by Sayma and her sisters for the wedding.

Various cousins and aunts helped cook meals and simmer chai. Neighbor women peeled pounds of garlic on the roof. A few men appeared busy, but mostly they just sat in lawn chairs smoking and gossiping. The children’s role was to stay out of the way, and they spent most of their time in the lane outside the house, catching tiny frogs in the pools of water that lay stagnant after the recent rains.

One of Sayma’s sisters confided to me that she was convinced that the more people who tried to help, the slower the work went. I was tempted to agree. The general commotion around the house was such that the coordination of even minor tasks was carried out with a level of drama and franticness that suggested that the wedding was really only fifteen minutes away and a crisis needed desperately and immediately to be averted.

The language barrier was high: Kashmiri and Urdu, the most common languages of the guests, were beyond me. Out of the 30 or 40 people who were in or around the house at all hours of the day, at best there were five or six with whom I had any success in communicating, and half of those were children.

Sayma played translator as best she could, though most often this resulted in her repeating the basics of my life story all over again for whichever guest had arrived that hour. She was clearly frustrated, and, I think, somewhat embarrassed, that everyone had to know about me, and that they had no qualms about talking about me in my presence, which I could sense even if I couldn’t understand what was said.

I was used to being stared at in most new places I went in India, where it isn’t frowned upon as it is in the US. Most often it comes from nothing more than a relatively harmless curiosity, as was surely the case here. But to have this happening in the very home where I was staying, with nowhere to escape for a respite, was a new and tiring experience for both me and Sayma.

Truth be told, I was somewhat frustrated and embarrassed by the whole ordeal. Without my Hindi to fall back on and without a role to play in the preparations, I wasn’t entirely sure what to do with myself. My repeated offers to help usually resulted in me being told to sit down, and a fifth or fifteenth cup of chai was produced for me to linger over. 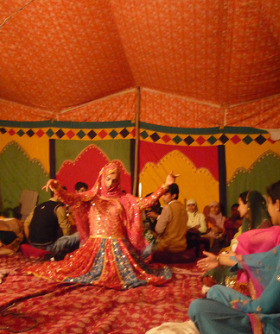 Though by day two I was already feeling restless, the situation did have its charms: Sayma’s grandmother, or Nani, interacted with me by slapping me on the leg or shoulder or whatever other appendage was most accessible to her to get my attention. Then she would mime through a series of gestures and eyebrow raises that she thought I should take another cup of chai, or that I should rub my hands together to remove the henna drying on them, or that she approved of my choice of a red chiffon sari for the first important event of the wedding.

Aside from Nani, others included me as best they could, by ushering me into different rooms to watch the various goings-on and smiling at me when they caught my eye. For whatever they thought of me, it was clear that most people were excited by my presence and very keen that I should witness every detail of the events leading up to the wedding.

There were also many attractions in the city that everyone was proud of and hoped I would see: manicured Mughal gardens, the cobweb of narrow alleys of the main bazaar, Lal Chowk, and the famous Dal Lake with its houseboats and pleasure dinghies. But what with all the activity in the house, I was told that there wouldn’t be time to show me around until after the wedding was over. And it was quite clear that the idea that I would venture out by myself or with Sayma wasn’t even considered as a possibility.

At first I thought, or preferred to think, that this was because of the civil tensions that had continued since my arrival. But as I thought about the parts of the city I was privy to – the domestic hubbub of the Mir household, and the public streets filled with veiled women I could see through the cracks of the curtained rickshaws we took when rarely we did venture out into the market (two times out of three to go to the beauty parlor) – I realized with discomfort and sadness that my sudden lack of independence was part of a larger system that appeared to intentionally, if quietly, render me and other women of equal young and unmarried status vulnerable and dependent. Among other things, Sayma and her unmarried sister didn’t even know their own address; a chaperone was necessary to ferry them anywhere they needed to go.

I began to wonder what I‘d gotten myself into. I had accepted the possibility that my safety would be more tenuous here than other places I’d traveled. But I hadn’t considered that this family, who had raised Sayma in all her curiosity and playfulness, was, at least while they were in Kashmir, quite conservative.

The total lack of privacy was starting to get to me, and, to be sure, the news of continued public disturbances didn’t help matters any. I pulled the wedding invitation out of my bag to look at the dates and determine when I could book my ticket out (if I could ever manage to make it to an internet café), and realized with a start what I had somehow missed before. The bride’s name wasn’t mentioned anywhere on the card.

To see images of Kashmir’s “Paradise on Earth” from outside the home, check out Matador’s Kashmir Photo Essay by Sami Calado.

The Kashmir You Don't See in the News

How To Road Trip Through the Himalayas on a Motorcycle

An Independent Guide To Snowboarding the Himalaya